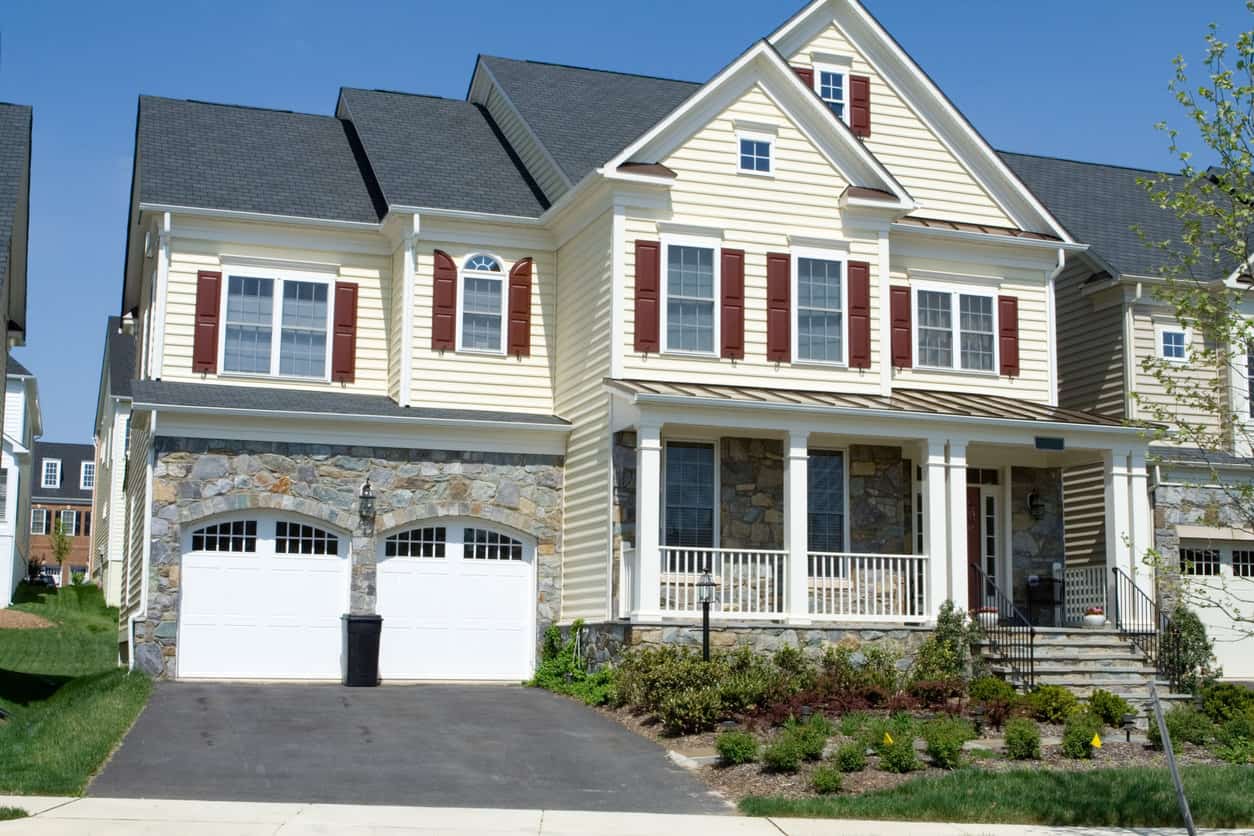 Big houses, mansions, McMansions. These are terms often been used interchangeably to mock upper middle class Americans’ home equity hubris. But there are certain attributes that truly make a McMansion the abomination that it is. While there’s overlap in some obnoxious features found in certain home types as well as design and remodeling decisions, McMansions don’t have hard-set criteria like tiny homes to get this distinction. However, there are specific traits that define them as the human centipede of housing.

The term “McMansion”, a portmanteau of the McDonald’s chain and actual mansions, also dubbed “Garage Mahals”, started being bandied about by real estate professionals in the 90s. When Bart Simpson first told us not to have a cow and neon clothes filled closets across America, the country had just come out of yet another recession. A prosperous era preceding the dot com boom and bust that would soon come wrought strong urges to show off your share of that prosperity. People had disposable income and were chasing higher paying jobs and entrepreneurial opportunities around the nation, and the homes that were forever homes became the new starter home. Greed is good, bigger is better. A home wasn’t just financial security and a place to raise a family but now a means to show off. What better way to get into a dick-waving contest with Ralph at work than boasting about making an offer on this overly ostentatious gigantic starter mansion, instead of just continuing your affordable mortgage payments on the comfortable but modest 3-bedroom house the rest of your family was totally fine with?

It would be some time yet before Glass-Steagall was choked to death in the middle of the night and banks started giving out mortgages like Halloween candy. But the 90s were a time of plenty and if you weren’t showing off your good fortune and Boomer sense of entitlement with a fancy new house, it was a nicer car or schlepping your kid to private school. Regardless, incomes and net worth soared and so did the demand for bigger badder homes. Entire subdivisions were being staked out and vacant lots purchased en masse to build homes beyond dreams. You didn’t have to travel to the gated communities of Bel Air or eastern Long Island to get a mansion, you could now commission one for half the price in some Indiana exurb or New Jersey suburb.

Little did they know that the denizens of Bel Air were totally laughing at them from their actual mansions with household staff and whatnot.

Come the mid-90s, McMansions were hot. They were everywhere and continue to spring up in suburban and exurban development to this day. The term became so ubiquitous that it actually made it into a real dictionary. Now that kids who were born in the 90s are real adults despite what news outlets may tell you, the term “McMansion” is still being thrown around but incorrectly applied (even if you were alive in the era but just never had the funds to consider upgrading your home). As for the factors that make McMansions different from actual mansions and your average single family home that’s on the larger side, let’s examine both sides of that portmanteau first to better understand those attributes.

Table of Contents Show
The “Mc” Side of McMansions
What Makes the Mansion NOT a Mansion?
Size Matters 😉

The “Mc” Side of McMansions 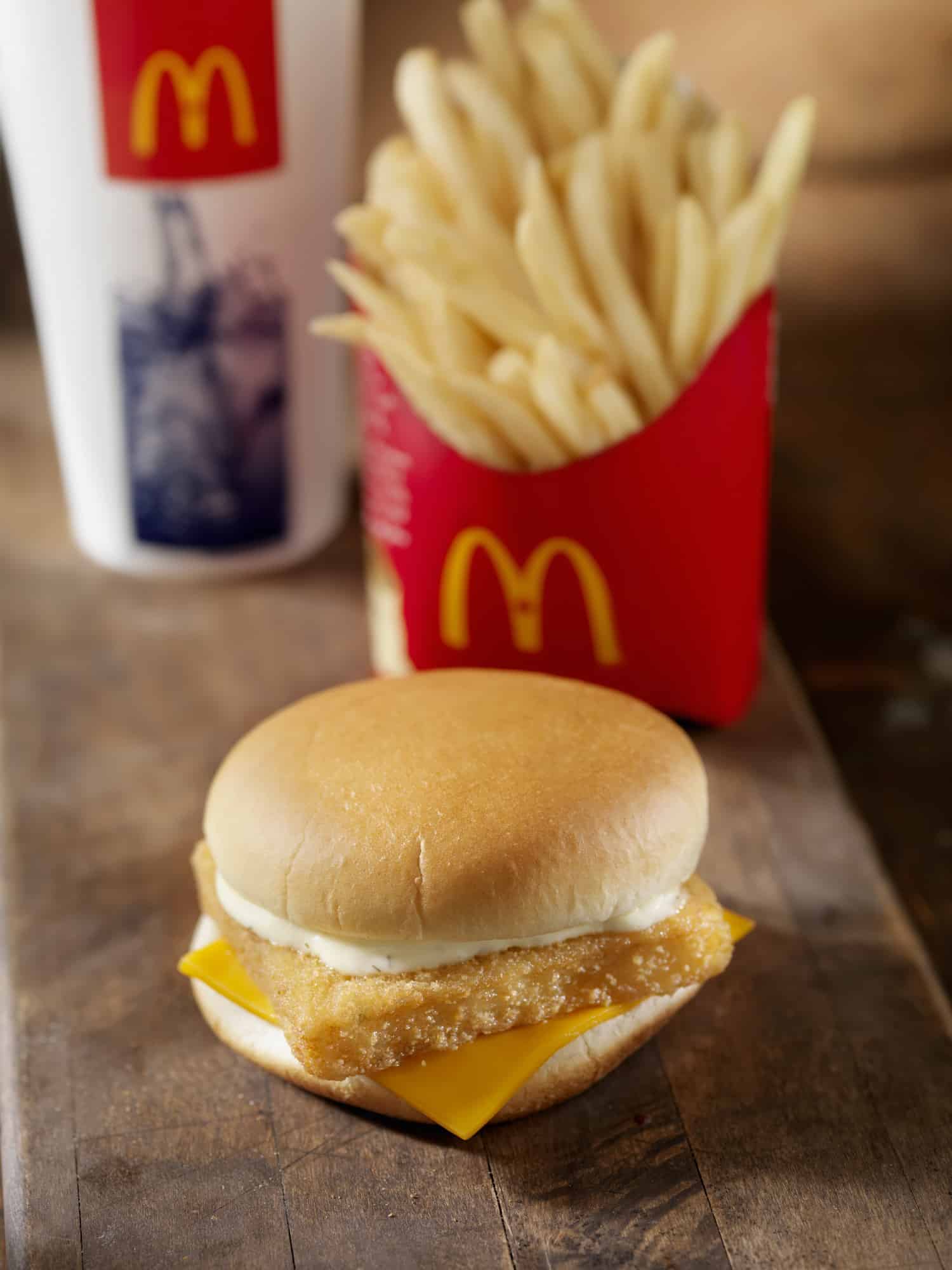 One of the key features, but not always a defining feature as this depends on the location of the property and the specific lot, of McMansions is that some of them look identical. The whole idea of going to McDonalds and other fast food chains is that you know you’re getting the same slop wherever you are. You could be thousands of miles from home and know exactly what to expect. Those McNuggets and overly salty fries are supposed to taste the same in a rural Nebraska town as they do at JFK Airport in New York, or the strip malls of Menlo Park, California and Skokie, Illinois. Whether you’re ordering in Paris or Peoria, you’re getting that same signature red fry bucket and sandwich you hope no one spit on.

So it’s the same concept with McMansions. There’s subdivisions and lots that were expressly designed to meet the demand that peaked in the late 90s-mid aughts for these structural beasts that were meant to show off how rich you were, but not TOO rich. Some of these subdivisions came complete gates and security guards plus HOAs that are stricter about your exterior decisions than the IRS is about what goes on your tax return. Builders had to meet this demand and make the HOAs-to-be happy, so they just prefabricated the McMansion design for these new developments and repeated the process like a cookie cutter on a plain slab of sugar cookie dough. 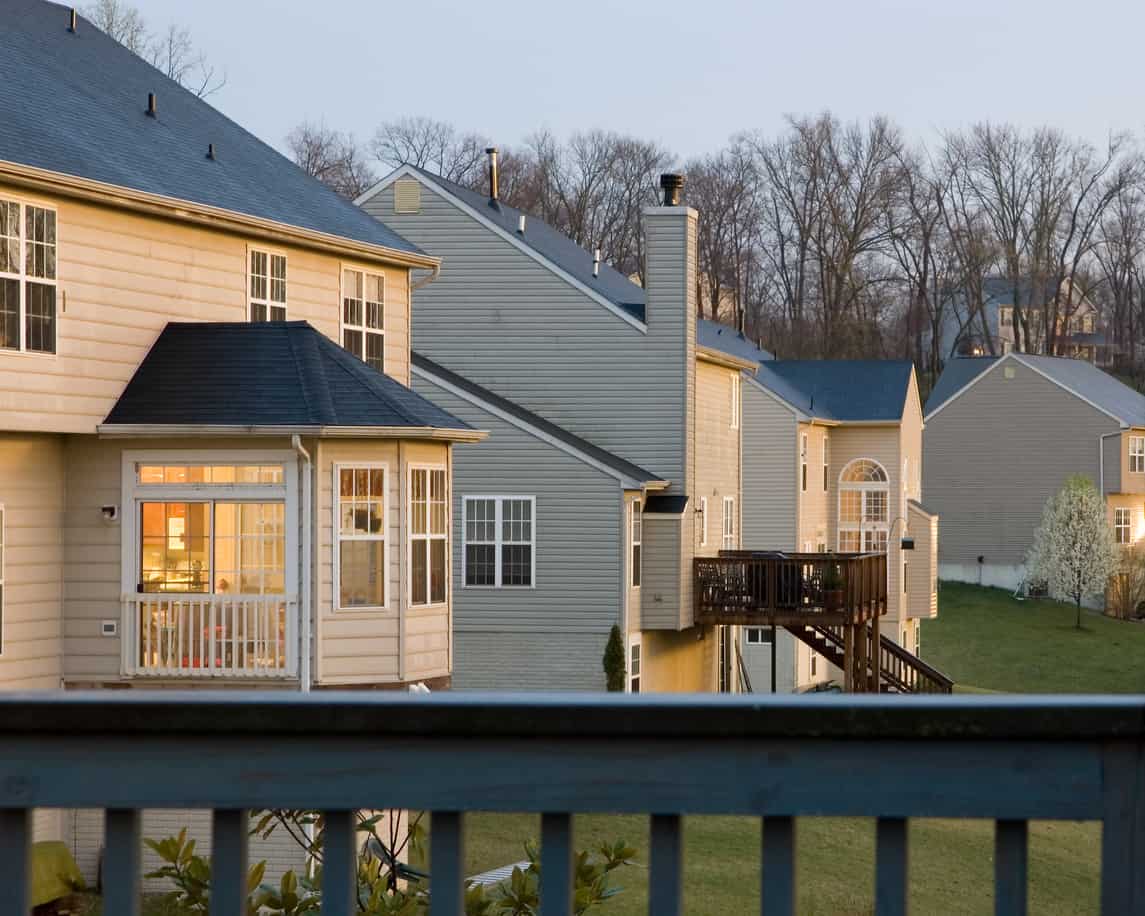 They don’t just mostly look alike, they’re crammed closer together than jampacked commuters on the subway. No space at all! This is a human centipede!

Of course, these cookie cutter box lots of identical massive houses that made people think signing mortgage papers replaces having a personality is nothing new. If you watched the show Weeds, it popularized the old Malvina Reynolds song “Little Boxes”, about those boxes made of ticky-tacky that house people who all look at the same.

The show took place in the fictional McMansion-laden suburb of Agrestic, California which was filmed in and took inspiration from Stevenson Ranch, an affluent region in the Santa Clarita Valley.

That song came out in 1961, about thirty years before “McMansion” became part of our lexicon.

What makes the McMansion so much more pernicious is that they’re not just these looming leviathans of bland hubris, they’re often not made of quality materials. The “Mc” part of the name doesn’t just imply that corporate mass-produced look and feel, but you’re definitely not getting fresh and healthy locally-sourced ingredients when you dine at Mickey D’s. The same is true for that McMansion. It wasn’t built with structural integrity in mind, and is in fact what happens when your architectural degree comes from Trump University. Those block lot McMansions hastily went up so the developer could cash in right away, just like those Big Macs and fries sitting under the heat lamp.

What Makes the Mansion NOT a Mansion? 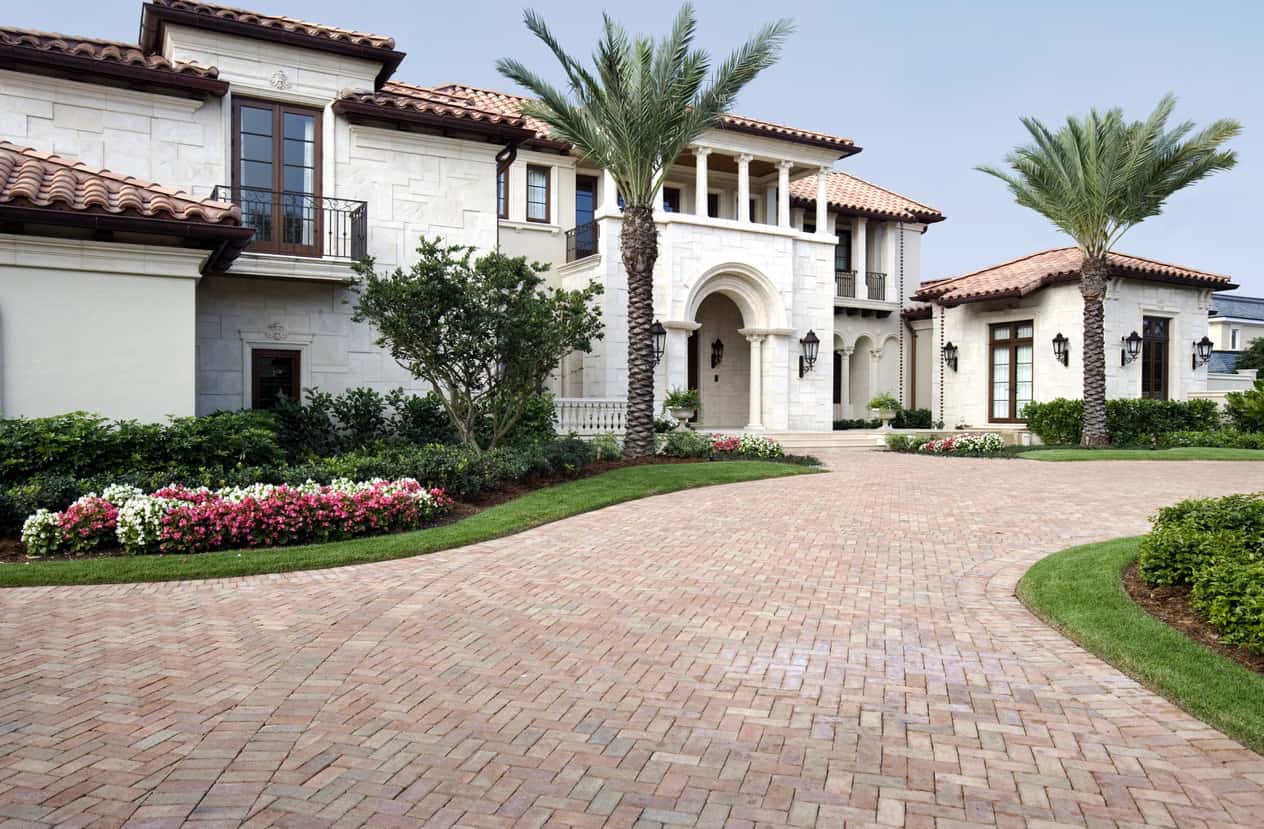 Why get a McMansion to schlep to and from your office job that’s now farther away than it was from your old tract home, when you can have the real thing and spend your days feeling like a cocaine magnate?

Now for the “mansion” part of the portmanteau. It seems like the most obvious part, but there’s more nuance.

Actual mansions are a cornerstone of generational wealth in aristocratic families. They’re gigantic and flashy homes hidden away from all the commoners unless the Streisand Effect takes place. In New York, Billionaires’ Row on 57th Street is comprised of some of the most expensive real estate in the world where the ultra-wealthy inhabit several floors of apartment buildings instead. Regardless of how new or old these mansions are, they’re always customized to the current occupant’s liking.

This can seem ironic given that many McMansions are characterized by the prefab design described above. But not all McMansions are 100% prefab, depending on the subdivision or lot. A freestanding McMansion can be commissioned and customized which usually always equates to a Home Depot catalog puking all over a first year architecture student’s homework then proceeding to slip in it. 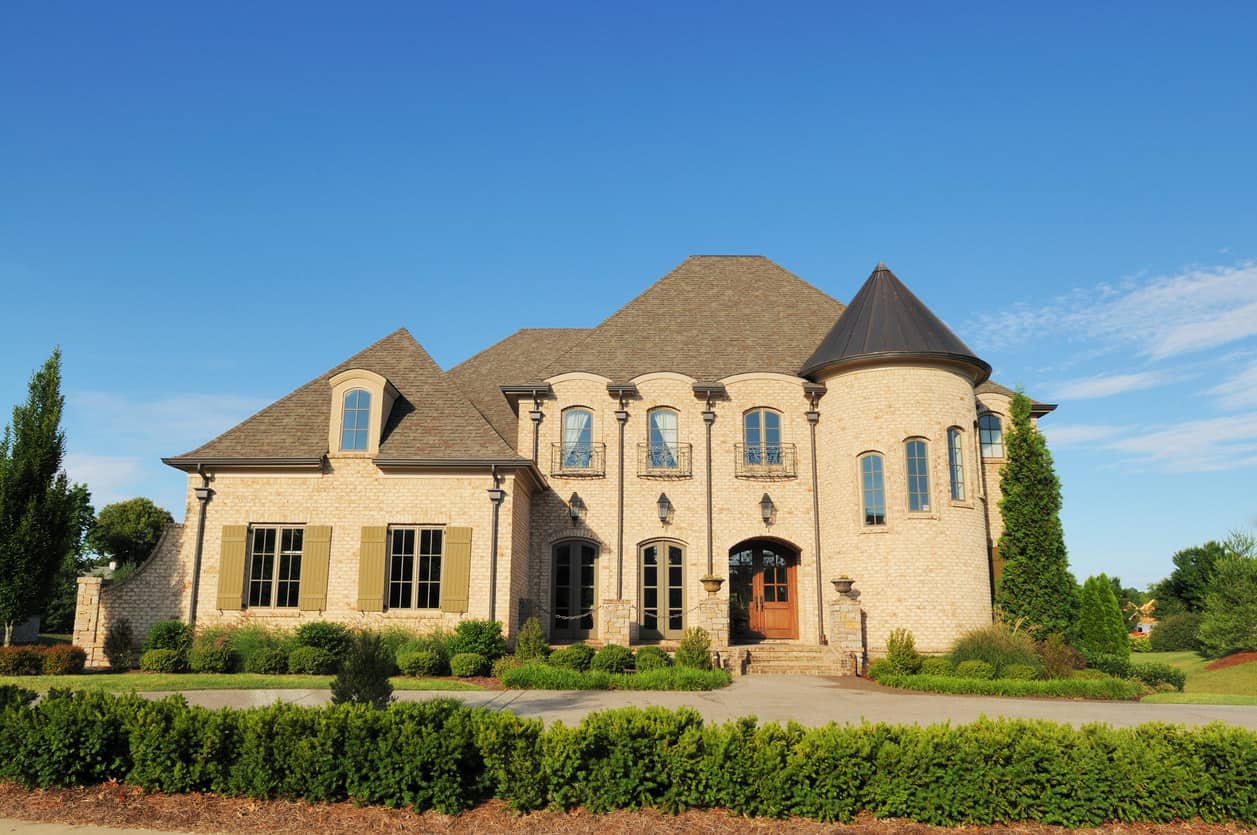 How many rooflines can one house have….? What’s up with the fake castle tower?!

McMansions can stray from the consistent sameness found in Big Macs and instead go for the exact opposite: a jumbled McFlurry of completely mismatched and unrelated architectural elements that results in no distinctive or tasteful style. It’s not a traditional Butterfinger McFlurry either, someone threw in fries, some uncooked Filet-O-Fish, Taco Bell sauce from down the street, and a bunch of expired coupons a disgruntled customer left on the counter.

Towers, mismatched roof lines, false dormer windows, oddly placed quoins…if you can yank it from the AIA or realtor.com glossaries, chances are it’s landed on at least one McMansion.

Then the remote location factors in. Just like real mansions, McMansions tend to be farther from city centers than traditional single family homes. This is because zoning ordinances and/or lot sizes in these neighborhoods are less likely to be conducive to building homes this size. Hence, the new subdivisions full of the McDonalds portion of their namesake that have been popping up in droves for the past 25 years within suburban city limits. It’s because of the difficulty in placing so many enormous properties within the permissible lot space that it leads to the human centipede effect where you can practically read your next door neighbor’s Twitter DMs from your living room window.

Doesn’t that honestly defeat the purpose of buying a house, especially one so egregiously big? 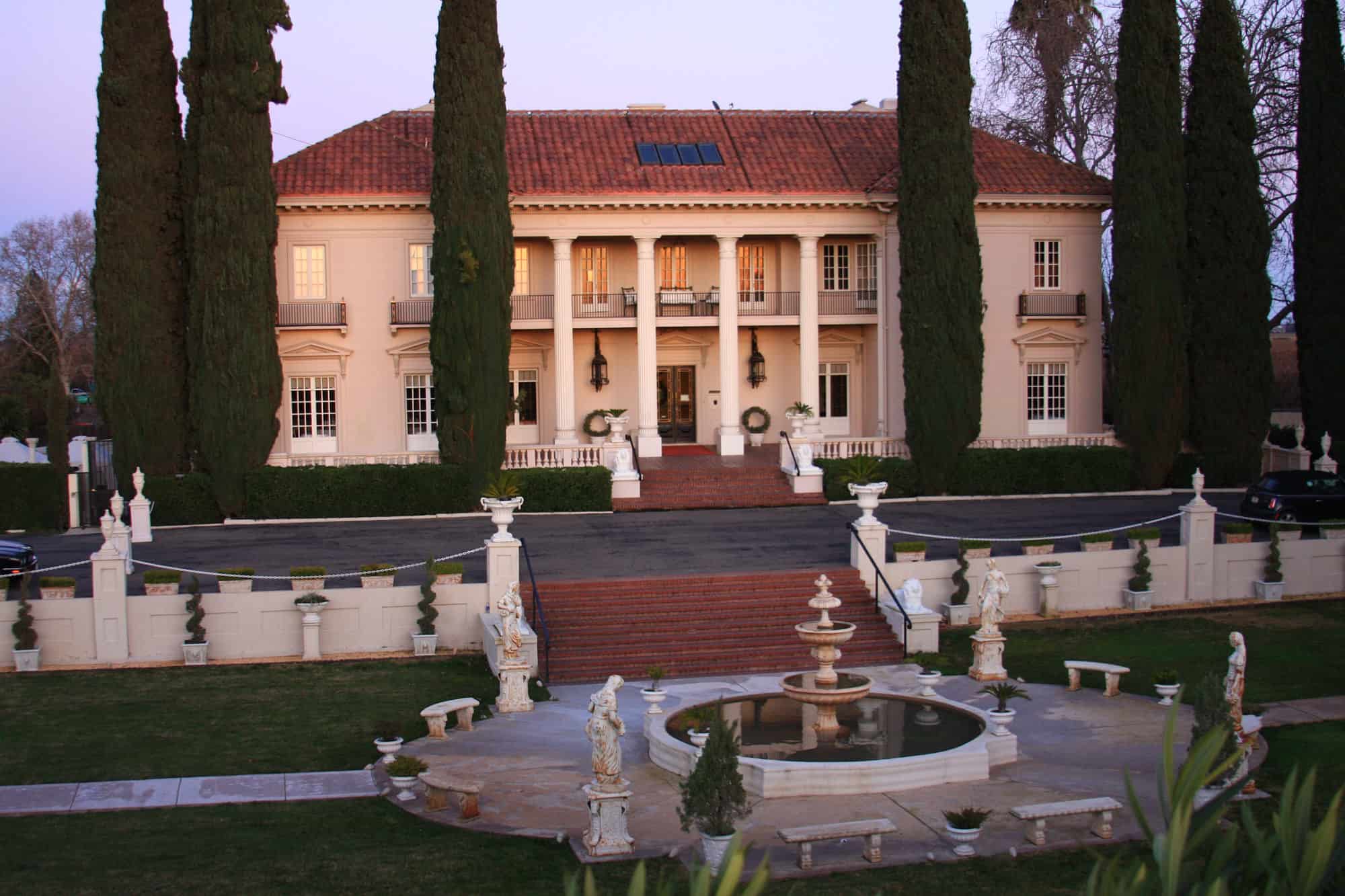 There’s no “Mc” in this Beverly Hills classic most of us would have to sell a kidney for just to spend the night there.

Speaking of size, let’s get down to brass tacks on that one. Real estate professionals don’t have an official square footage criteria for what separates a mansion from a luxury home, but a minimum of 8,000 square feet seems to be the gold standard among American realtors. However, this can vary by market. 5,000 square feet could be sufficient in the Carolinas to call a home a mansion, but a Beverly Hills resident might refuse to a call a property a mansion unless it’s at least 20,000 square feet.

Oh, but that McMansion? See, it thinks it’s so much bigger and greater than it actually is. The old money manse that’s 10,000 square feet is totally humble (well, as humble as old money can be…) and stays quiet behind its iron gate and white-gloved butler doing his best to keep all the peasants with torches and pitchforks at bay. But that loud, obnoxious McMansion that just HAS to let everyone know it’s the absolute best? Well, they tend to average around 3,000 square feet. Most peter out at about 2,600. Over 4,000? It could hit the back walls of the adjoining McMansion on that ugly ticky-tacky lot, but it’s going to sag, sag, sag in due time because of the horrible quality of the materials and hasty construction that took all of 15 seconds to get the job done.

But while size matters in distinguishing a McMansion from an actual mansion, so do amenities. Mansions absolutely have elements of luxury that’s unimaginable to the masses, such as movie theaters, tennis courts, state-of-the-art home gyms, game rooms, and other areas designated solely for leisure. There’s also at least two kitchens if not more for entertaining large amounts of guests and keeping a sizable household staff fed, plus sprawling grounds like private forests and Zen gardens.

Unlike the shoddily-built McMansions, true mansions are also made of the best materials that the builders can find. Think Italian marble, wood that’s a cut above whatever is at the lumber market off the highway, Icelandic volcano ash countertops, and a whole host of other things that will make you long for knocking the estate tax threshold back to pre-Reagan levels. McMansions might boast frontline appliances too, but they’re essentially being held up with popsicle sticks. Third grade science fair projects have a stronger chance of withstanding a superstorm or hot water heater accident than a McMansion does.