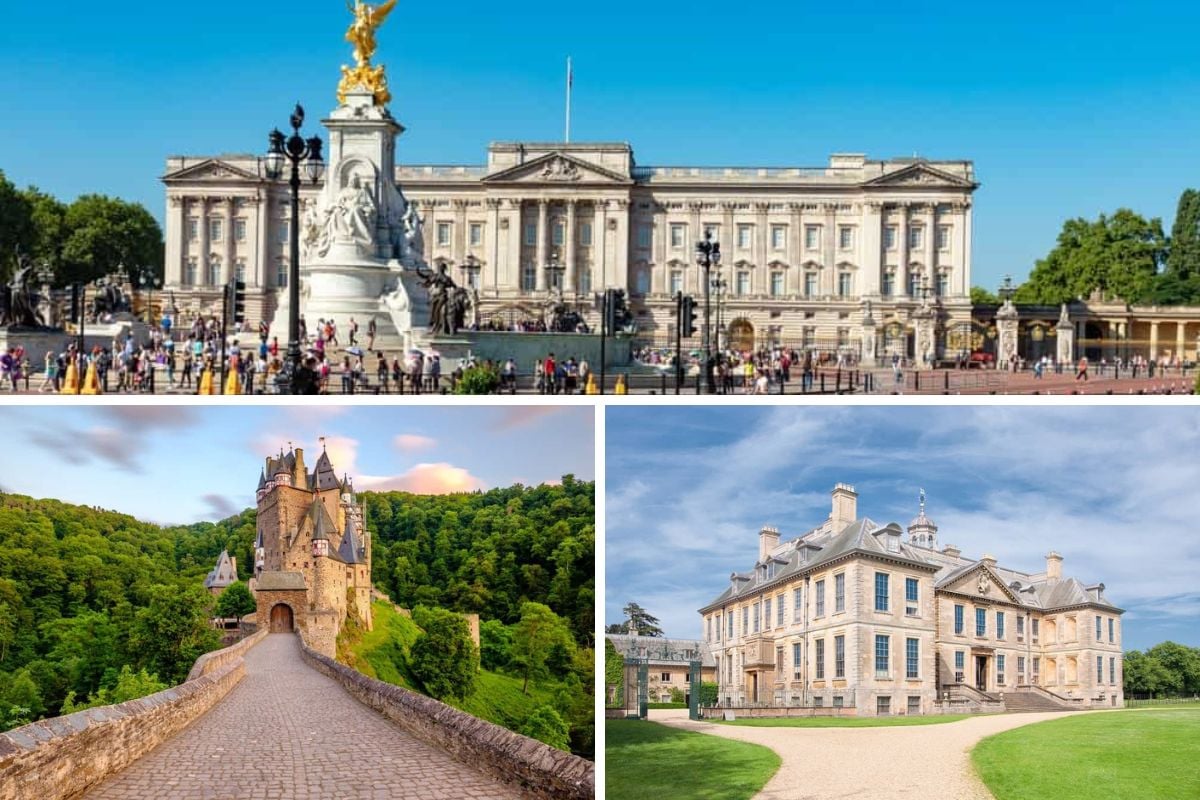 Alas, if we had such choices before us as the title suggests! Let’s take a look into the fairytale choice between the castle, the palace and the manor house. Th

is fantasy is a familiar one – our slipper has been lost at the ball – or shindig, as it were – and the prince or princesses ‘ courier is on the look out for their sponsor’s soul mate – little ole you or me! It is the case of the glass slipper vs. the velvet slipper vs. the gilded slipper – unisex footwear, of course –  one slipper fits all.

Who do we prefer to seekeeth us – the Lord or Lady of the castle, palace or manor home? Where, o where would we want to live – and why? In my best British accent – “The appointment’s of each must be thoroughly examined… Shall we take a gander?…” 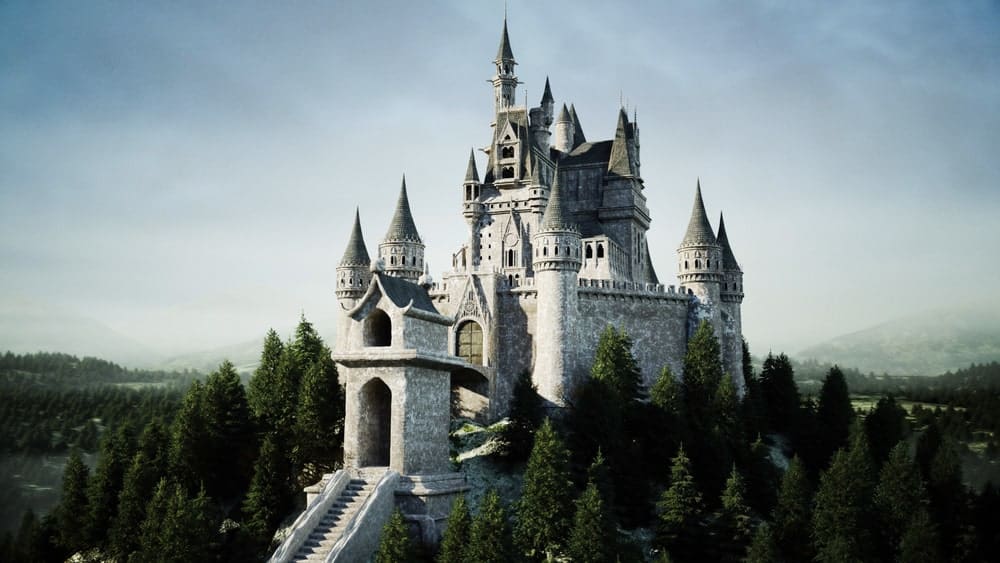 A look at an old fairytale-like castle surrounded by a gorgeous surrounding.

The castle or “glass slipper”, remember Cinderella! We think of this beautiful place where dreams come true like in the fairy tales. However, castles of old were also places of battle. The glass slipper would have surely been shattered!

The word castle comes from the Latin word castrum or fort. Castles are buildings that were built generally during the Middle Ages.

The Middle Ages were between the 5th and the 15th century AD. Castles were built for protection and fortified thoroughly against enemy attack. In addition to being structures that were built to safeguard against attack, these buildings were also homes for nobility or royalty. They were usually expansive structures.

As time went on, they became more and more complex. Builders had the task of combining noble living with defense against instant attack.

A morning interrupted…For example, the lady of the house is embroidering in the day room of her castle, chatting with a visitor when a footman enters – most unceremoniously – to announce an attack.

The attendant hears and alerts the kitchen staff. “Put the bloody – blood pudding down”, she whispers – shrieks are not allowed in the castle – The queen immediately puts down her embroidery and is ushered into an adjacent hidden room – built just for this purpose. 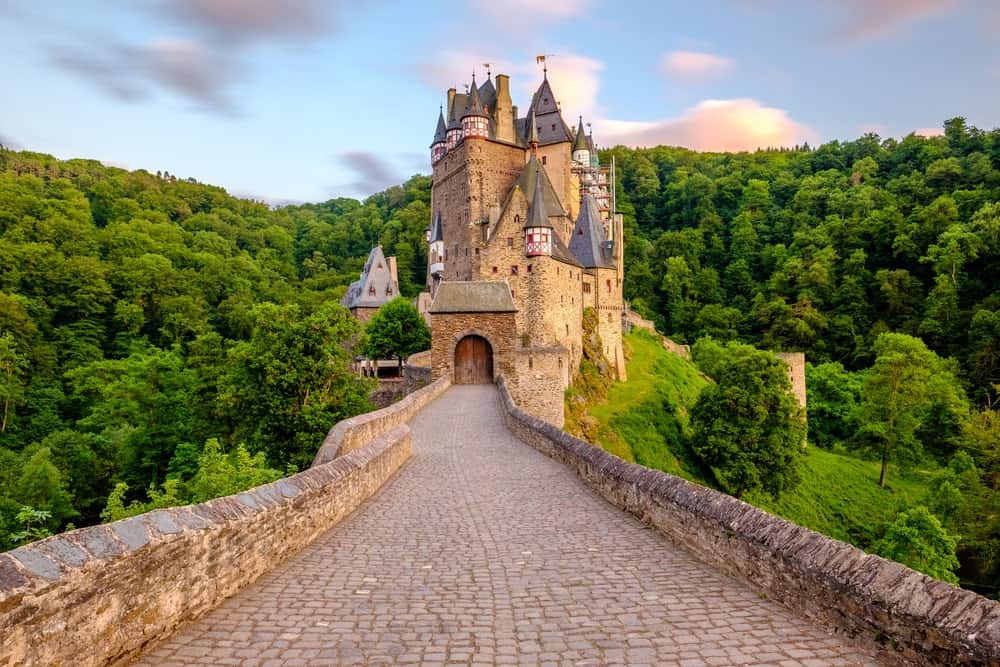 A look at the Burg Eltz in Rhineland-Palatinate, Germany. The photo was taken from the castle’s walkway surrounded by countless mature and green trees.

The added complication of the need to protect the most important people in the region – the royal family – from an instant attack meant that the castle had to be well-appointed, as luxurious as possible for those days, as well as fortified like Fort Knox.

The royal family wouldn’t be expected to climb a ladder or rope to reach safety. Likewise, they would not be hidden with their servants, either. As a result the expansive room sizes and number of rooms of castles, palaces and manor homes had to accommodate many. There were rooms for living, playing and hiding from attack.

The three most common types of castles were the: 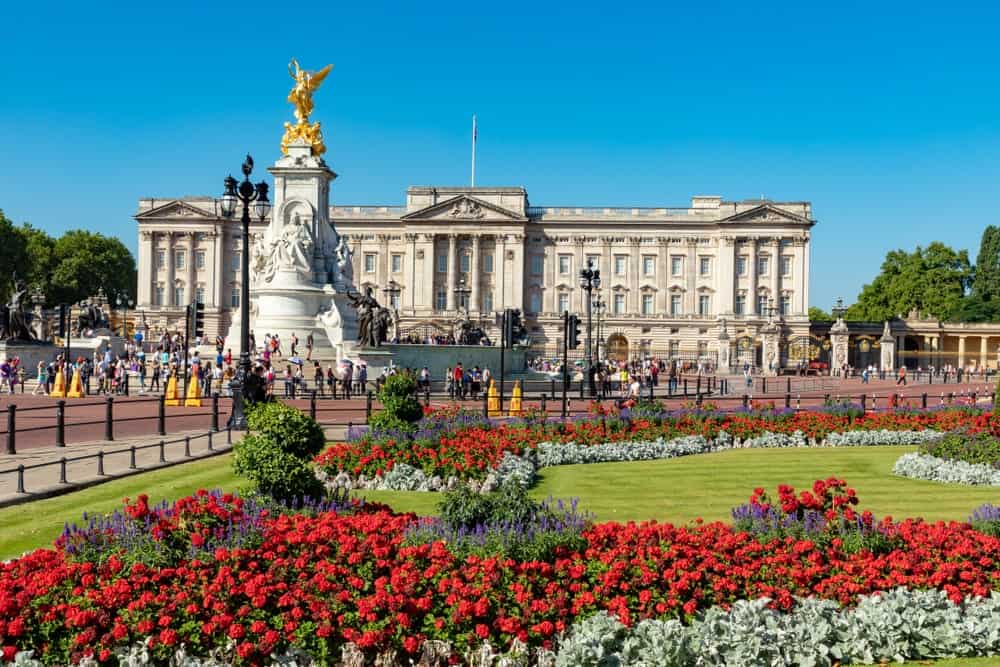 A view of her majesty, Queen Elizabeth II’s residence, the Buckingham palace from its lovely garden filled with healthy plants and flowers.

The palace shall be referred to as the “velvet slipper” for the purposes of this article. It is a castle that is not fortified. As a result, the royals that dwell within can spend their leisure time in a soft velvet slipper. The word palace comes from the Latin word palatium.

This refers to the Pallantine hills of Rome where the Imperials lived. The word palace relating to government dates back to 790 AD, when Paul the Deacon described a governmental event of 660 AD.

This is the place the high borne such as a knight, lord or monarch would reside. Because it is not, by definition, fortified for battle or attack, it can be even more palatial and stately.

Many circles use castle and palace interchangeably. However, the only difference is that a castle is fortified while a palace is not. They can house the same types of individuals.

The castle and palace have very similar design features. 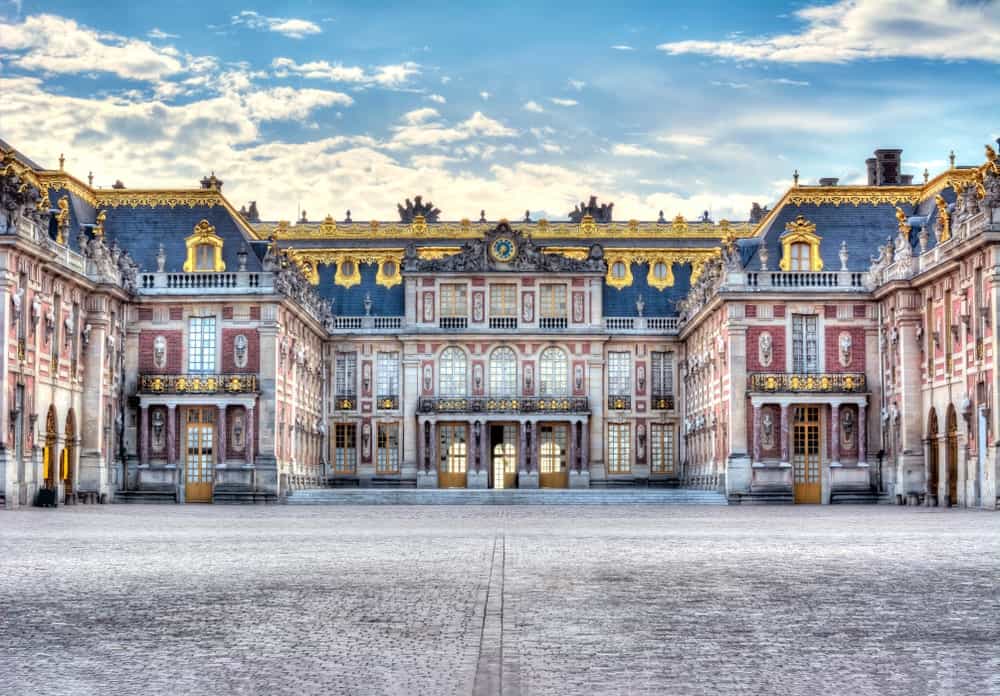 The elegant Versailles Palace in Paris. The exterior architecture of this enormous palace is absolutely striking.

Some famous palaces include:

Many countries have decided to transform former palaces into visitation sites. People are allowed to enter the palace to look around and get a glimpse of how royalty lived. Palaces are also transformed into museums in many instances, such as the 900 plus room, Forbidden City in Beijing, China.

The Features Of A Castle & A Palace

Due to the variety of people and the luxury they expected to live in, there were many types of castles and palaces that were built throughout the Middle Ages and beyond.

Because the words castle and palace are nearly synonymous as they are used in culture today, the characteristics are the same with very little distinctions. Some common features include the: 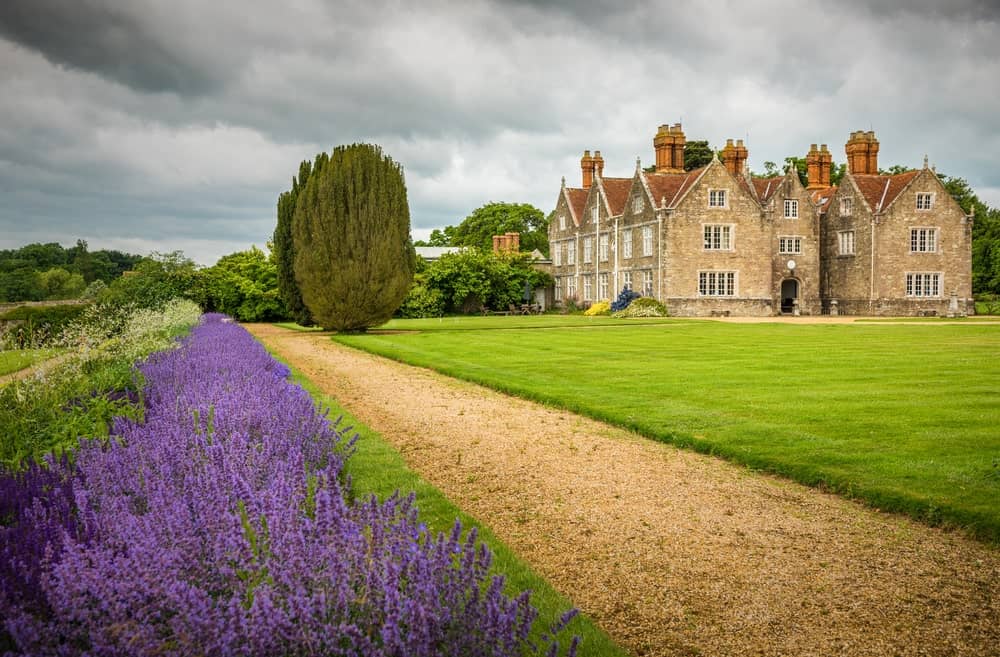 Barton Manor boasts a wide space of garden with a walkway. The surroundings are absolutely peaceful and lovely.

…is the gilded slipper of this trio because currently it is used mostly for show. Manor houses could be fortified or not fortified. It is, by definition the large country house and lands of a royal lord or noble.

This term is more loosely applied to various country homes. Dating back from the late medieval area into today, manor houses house the nobles or lords of the agricultural tract of land. Manors usually have the components of comprised tracts of land. A manor is a village.

The workers would tend to the land and the lord of the land would typically have a manor house on that property or village. It, like a castle or palace was magnificent, and luxurious.

Some Features Of The Manor House And Grounds 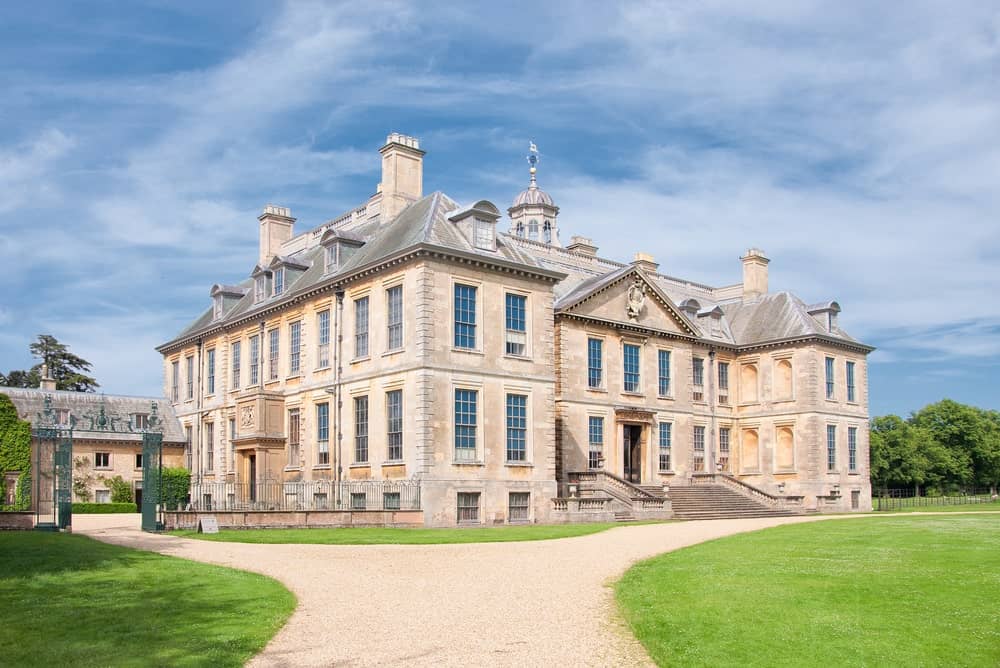 A focused look at this 17th century English Mansion located in Belton, United Kingdom. It has a classy exterior and wide lawn area with walkways.

The manors would have all the necessary components of a village. Typically there would be:

In the medieval times, manors were the way in which nearly all people lived in England. Manors were their own self-sufficient towns during that time. In this way, the residents of the manor would be able to provide for their own food and necessities. Generally, a manor was between 750 acres to 1500 acres.

Manor homes and the great hall within, were the formation and the place where the residents of the manor gathered. It was an unofficial conglomerate of wood and stone buildings. There would generally be a chapel, a kitchen, farm buildings and the great hall.

The great hall is where the village business would be attended to as well as the court of the manor. Manors were generally managed by knights of the king. The king was supported through the work and business of the manor.

Each of his knights would manage the manor and then in, in turn give the proceeds to the king. Their main business was of the agricultural type.

If The Choice Was Yours 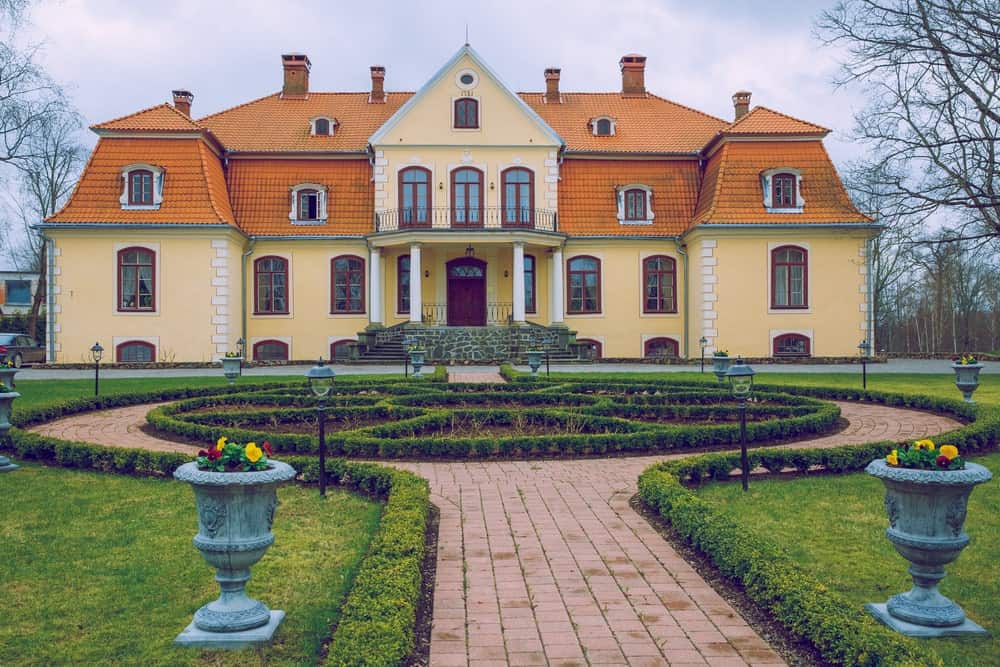 An old manor house in Latvia with a yellow exterior and orange roof. It courtyard and garden look so peaceful and beautiful.

When we decide to make a decision about which fantasy home style would fulfill our desire, it’s not an easy consideration. It definitely would depend upon if there was a time machine included in our fantasy Island trip.

It depends upon if we could go back in time. All three of these structures are very similar to one another with just slight distinctive differences.

For example, if you are a worker and like the idea of getting your hands dirty between spa dates, you’d like to live in a manor home. The manor residents worked together as a unit. There is not as great a separation between the lord of the manor and one of the peasants.

If the peasant stable worker fell ill, every now and again, the Lord would have to get off of his high horse and put his own yearling into the stable.

Today there is not much difference between the three. They are all beautiful. Touropia.com has a listing of the 10 most beautiful palaces in the world. This listing includes palaces, chateaus and other palatial structures. They are all opulent living spaces of old.

We can visit and enjoy them all today. The once secret gardens, keeps and gables are now open to the viewer – for a nominal fee, of course. As we wonder in the glorious sights of some of these treasures, we can ponder how life was in the days of old.

They are all over the world and may make your bucket list for a some day tour. You won’t need a glass, velvet or gilded slipper for entry. However, you should don your comfortable shoes – the grounds are expansive.