To lots of people, the word Gothic conjures up images of Dracula in a dusty old castle, or maybe disgruntled youth wearing a lot of black clothing. It’s something dark and disturbed, spooky, and surreal.

But for architecture enthusiasts, Gothic means stained glass windows, beautiful churches, lots of natural light, and stunning detail. Gothic architecture is one of the most recognizable styles, characterized by highly stylized elements. But the story of how this style was created did start with a bit of a dark and bloody history.

What Does Gothic Mean?

Gothic architecture is named for the Goths. This was a barbaric tribe in Europe that rose to prominence after the fall of the Roman Empire, around the fifth century. However, the Goths were not particularly known for great buildings.

They were mostly known for pushing back against the might of the Roman Empire and contributing to its ultimate fall. The Goths did go on to control large portions of Europe after the fall of Rome. Their legacy and their name still lingered in memory in the 12th and 13th centuries, when the Gothic architecture style was developed.

How Was Gothic Architecture Developed?

There was relative peace and calm throughout Europe after the Roman Empire collapsed and decades of struggle against Rome ended across the continent. Prosperity also reigned throughout Europe, paving the way for innovation and creativity in building design. 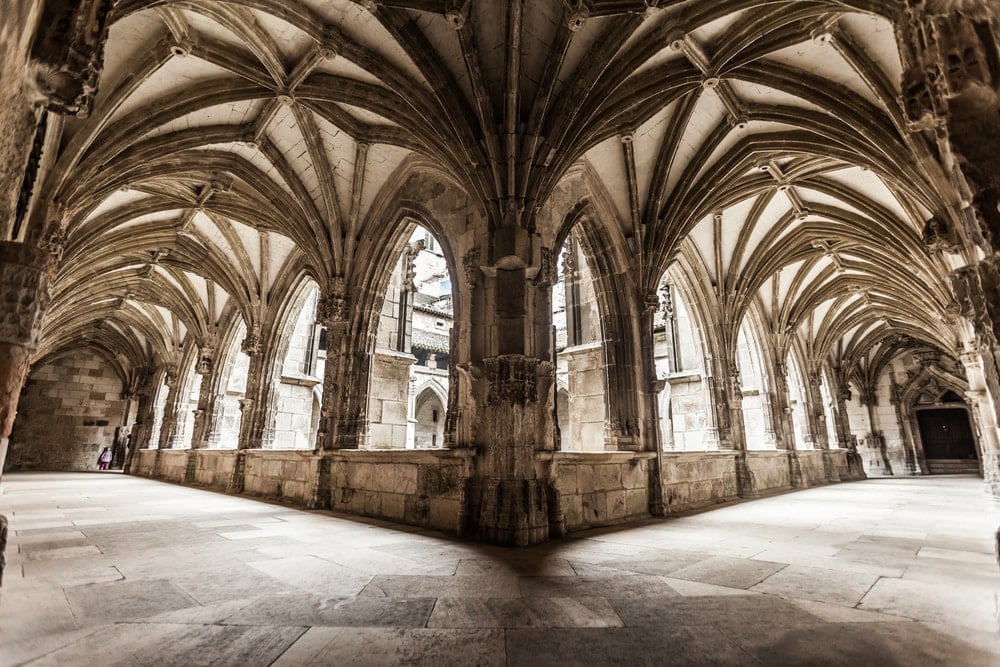 Many churches and cathedrals were built in Europe from about 1000 to 1400, with especially heavy concentrations in France and Britain. This gave architects the opportunity to create large-scale designs that were meant to impress. Elaborate Gothic architecture was born, a style designed to capture light from the outside world and bring it into the big, cavernous interior of churches. Gothic building designs came to define the look of Middle Ages architecture.

The Gothic architecture style was heavily influenced by Byzantine and Middle Eastern designs of the time, as well as the Romanesque looks of the past. The older Romanesque style was heavily used in the 10th through the 12th centuries. The main characteristics of the style were the thick walls and pillars, along with rounded towers and arches.

There was a desire to build large, tall churches in the 12th and 13th centuries. This led to new design innovations that became hallmarks of the Gothic style: rib vaults, flying buttresses, and pointed arches. The pointed arches are one of the main features of Gothic architecture. Probably, this design was borrowed from Islamic architecture that had spread into Spain. 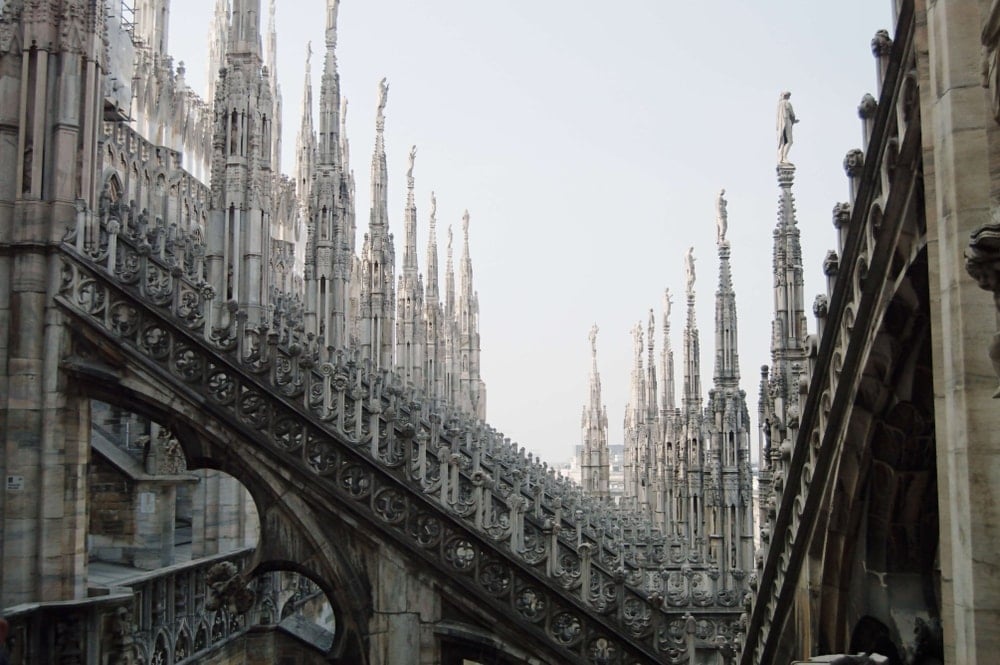 Pointed arches were first seen in the Middle East in the seventh century, becoming the main feature of mosques and palaces. During the Crusades, Europeans were exposed to Middle Eastern art, architecture, and medicine, discoveries that would help pave the way for the Renaissance centuries later.

The pointed Gothic arch wasn’t just decorative, it was also functional. This arch design relieved thrust, taking stress off of other architectural elements. This meant that the columns supporting the arch could be smaller in size, opening up interior spaces. 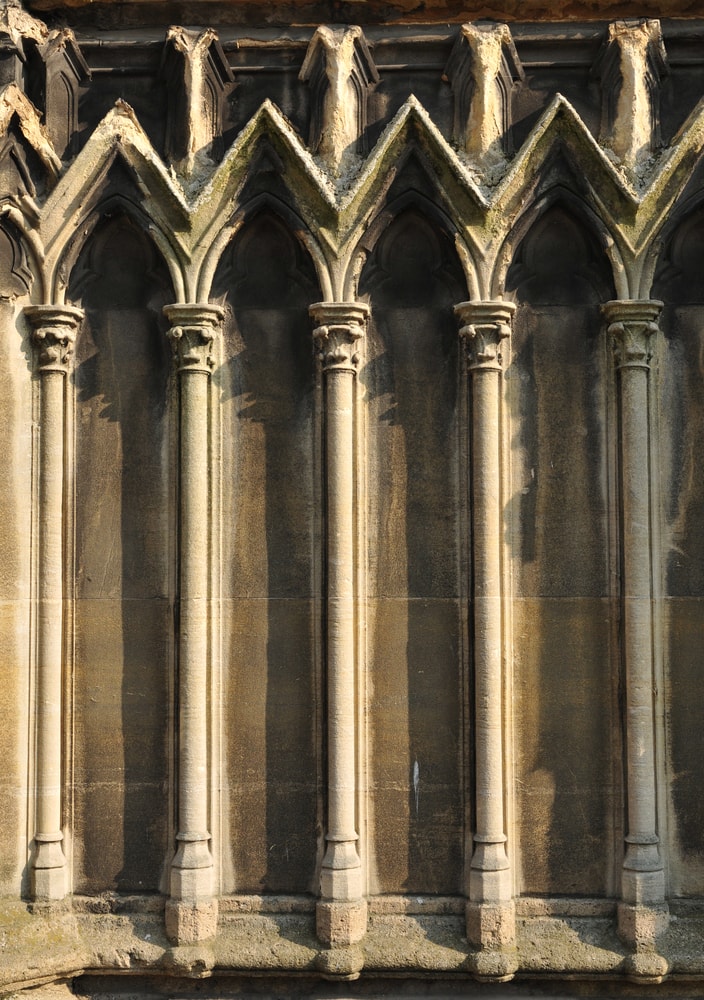 This allowed for tall, slender columns to go all the way up to the ceiling, where ribbed vaulting created a unique interior skeleton of beams against the ceiling. Early rib vaulting was seen in Romanesque designs but became refined in Gothic architecture. 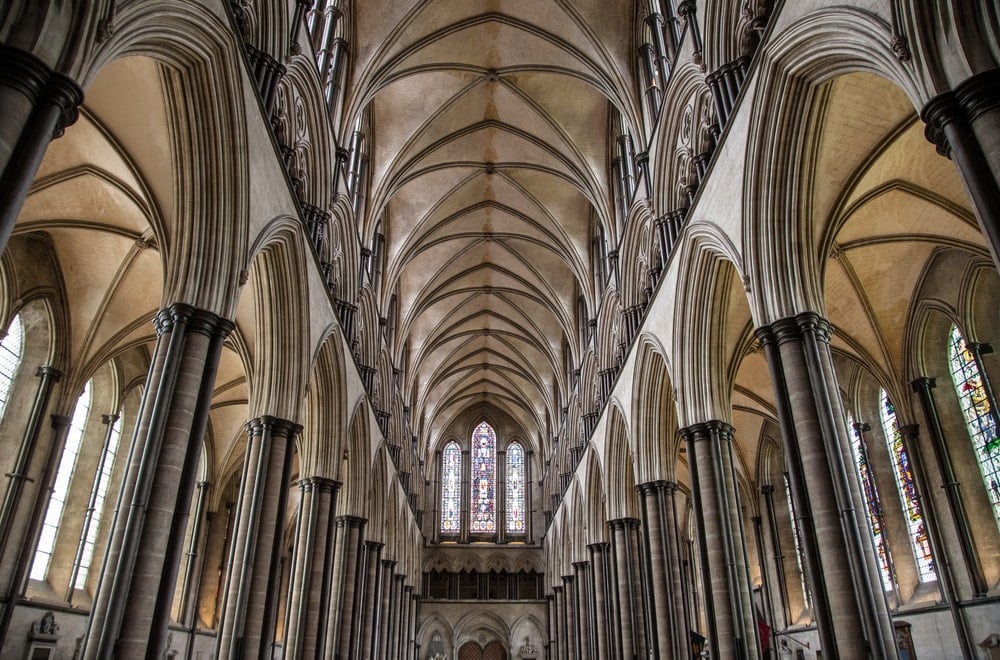 Ribbed vaulting soon became the main feature of Gothic architecture, not just a structural feature. Again, the support network had a practical purpose: it allowed for windows to be placed way up high toward the roof of buildings, achieving the main goal of bringing more light into the interior space. 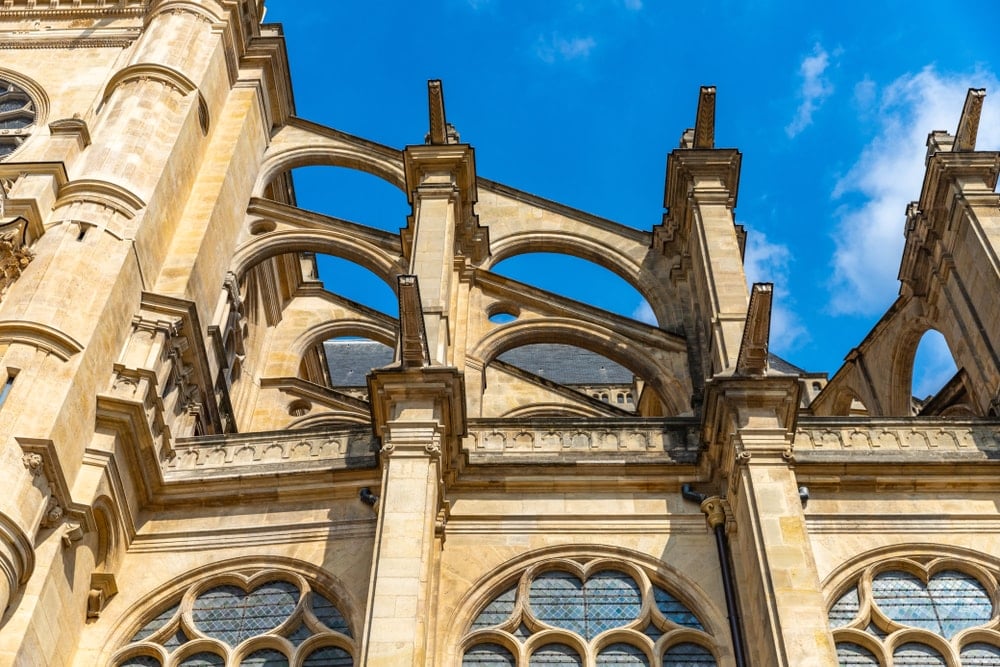 Flying buttresses were a huge innovation that made the Gothic design possible. These external supports helped bear the weight of the building while adding a graceful, arcing architectural feature to the outside walls. 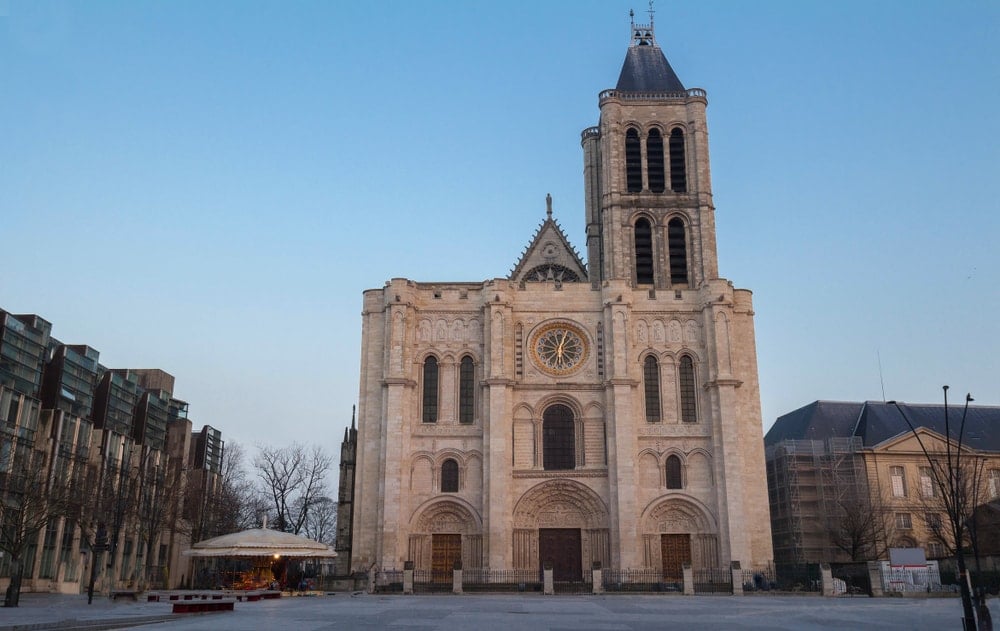 The abbey of Saint-Denis, built in Paris from 1135 to 1144, was one of the first churches to be built in true Gothic style. This building combined all the characteristics of the style together and helped to inspire every Gothic cathedral that would come later. 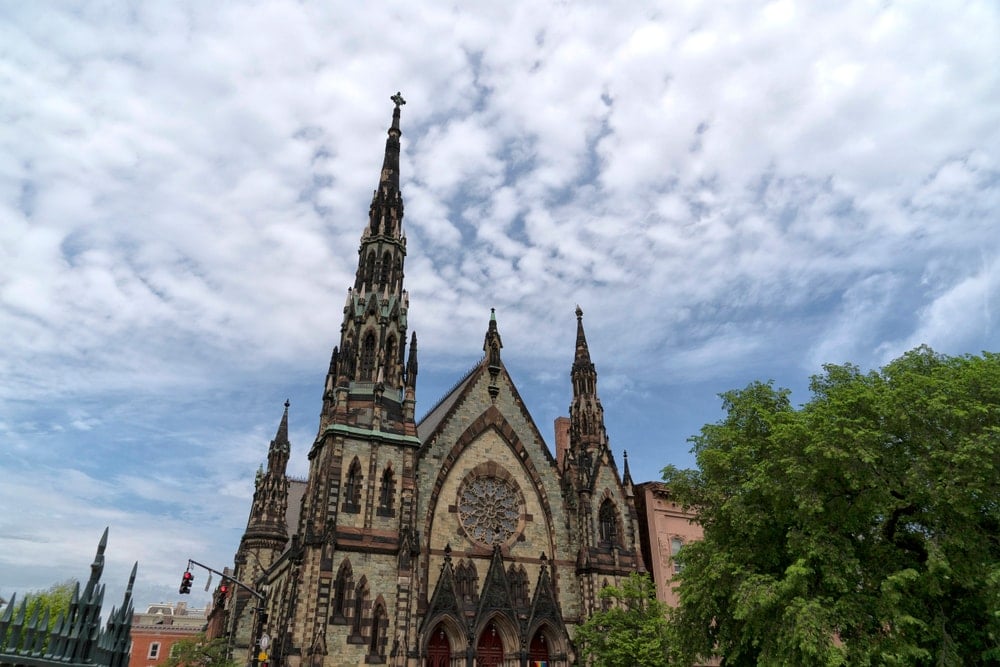 Another characteristic of the Gothic style is asymmetry. Many of the greatest Gothic cathedral designs were built with asymmetrical designs. You can see this in many famous Gothic buildings.

Gothic architecture was created during the Middle Ages. This style is still very much associated with this era in history and clearly brings the medieval era into mind. 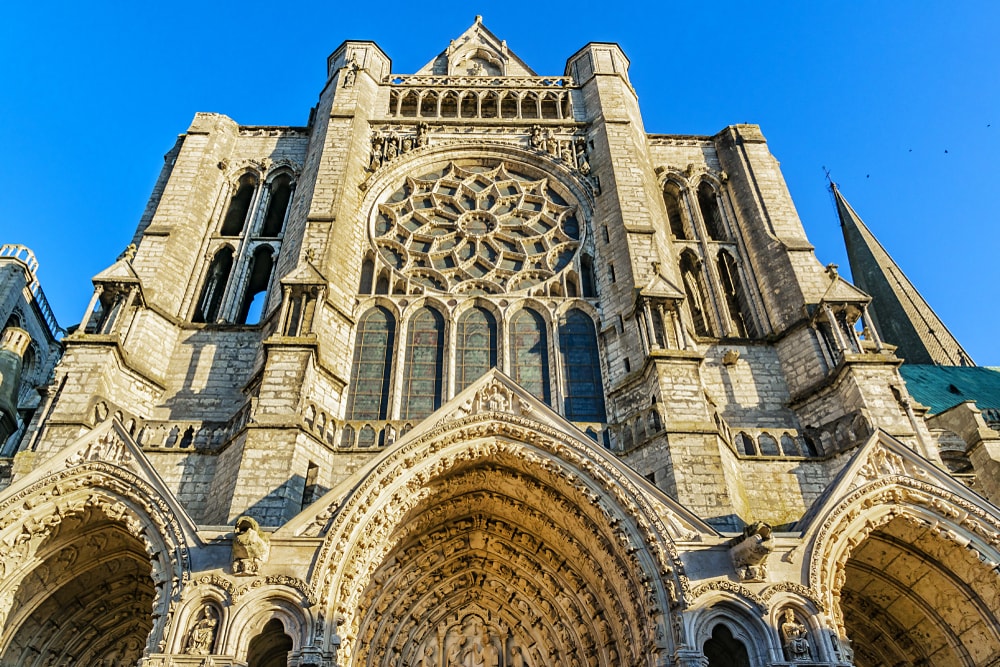 One of the most famous examples of Gothic architecture is Chartres Cathedral in France. This was built during the High Gothic years when there was an explosion of Gothic buildings being erected in France. The embellished look of Chartres Cathedral helped set a whole new bar for the Gothic look. The High Gothic period dominated the late 13th century, soaring to popularity from about 1250 to 1300.

The style was popular in Britain, Germany, and Spain as well. Italy put their own variation on Gothic style by building in brick and marble, rather than the stone that was used in the rest of Europe. 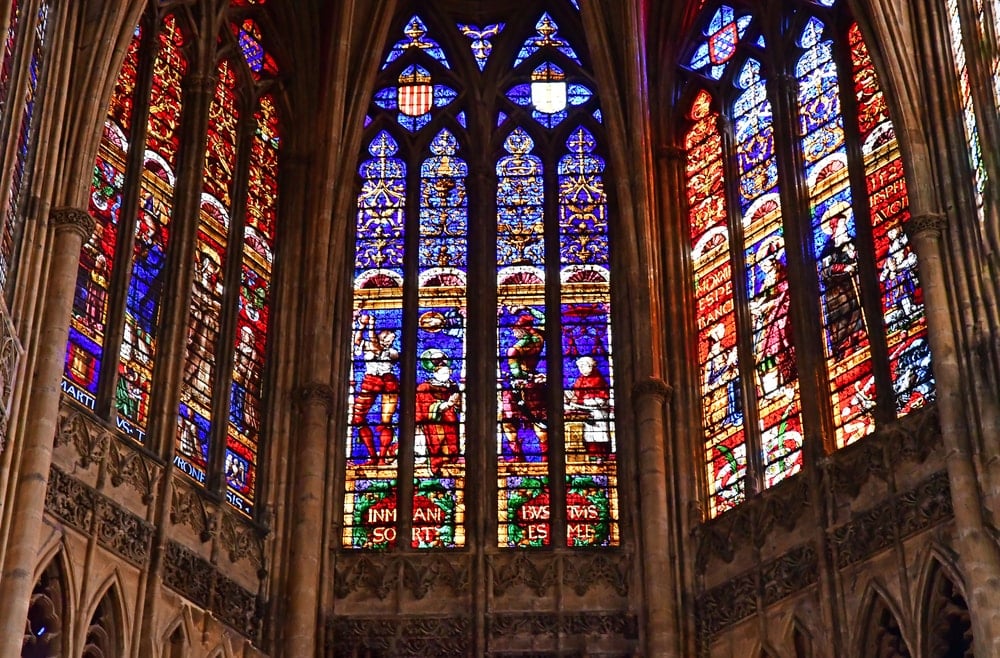 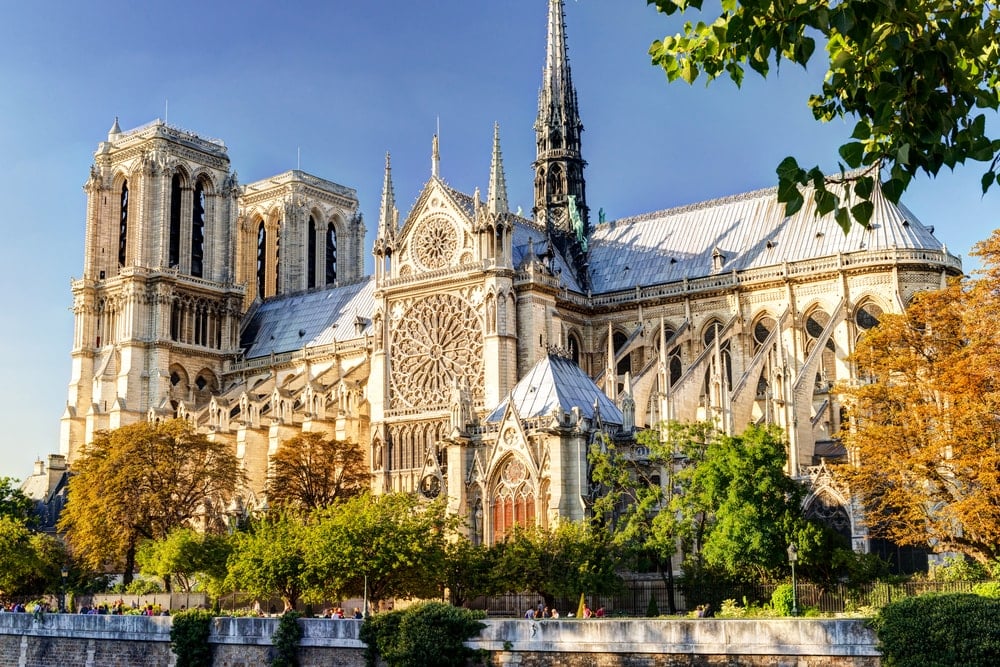 Though it was originally developed for cathedral designs, Gothic architecture was soon adapted to build a smaller church and home designs as well. Instead of stone, homes built in the Gothic style were constructed out of wood and plaster with steep, gabled roofs.

And Here Come the Gargoyles

As Gothic architecture became more stylized, another element was introduced into buildings designed in this style: gargoyles. These were frightening, sometimes grotesque creature carved from stone that was particularly predominant in cathedral designs. They started out with very practical use.

Early gargoyles were waterspouts that captured rain from the roof and diverted it away from the foundation of the building. Soon, the creatures took on another use: education. The elaborate statues were used to teach lessons from the Bible in cathedral designs and smaller Gothic church designs as well.

End of an Era

There was a Gothic revival in the 18th century as people re-embraced this highly stylized look. One of the first buildings in the U.S. to showcase Gothic revival style is St. Mary’s Seminary Chapel in Baltimore. It was built in 1807 in grand style, completed with stained glass windows. 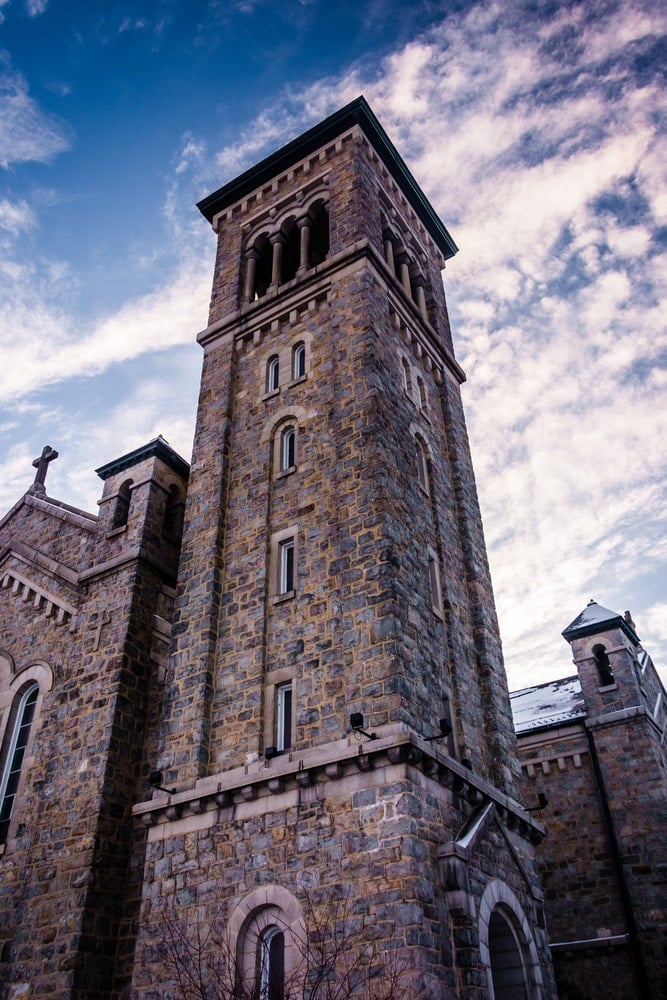 The chapel was far, far ahead of its time. It wasn’t until the late 1800s that Gothic revival architecture truly became popular in the U.S. Known as “collegiate gothic,” the style was employed largely in university designs across the U.S.

This was inspired by Oxford and Cambridge in Europe, both stunning examples of Gothic architecture. Gothic Revival style continued to be popular into the early 1900s and was used for a number of colleges and universities. 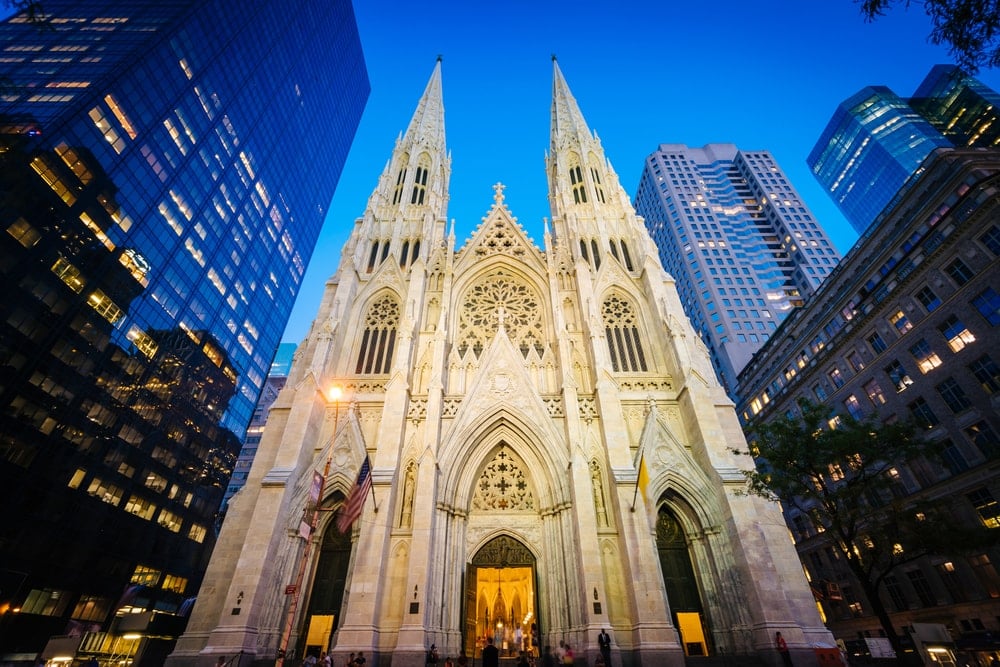 St. Patrick’s Cathedral in New York and the Washington National Cathedral in Washington, D.C. are both beautiful examples of Gothic revival styles in the U.S. 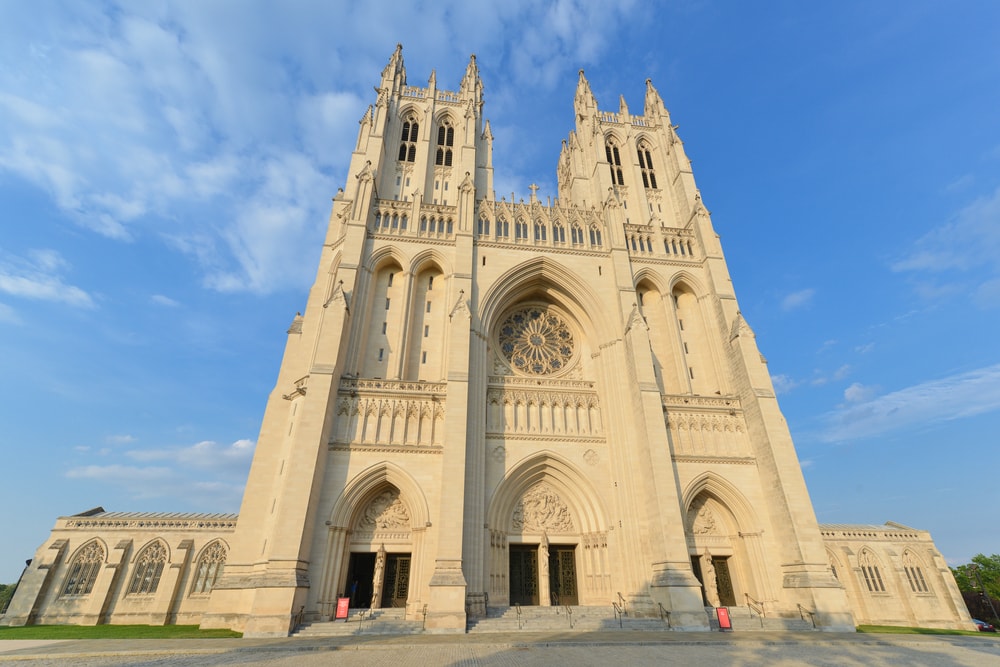 When you pass a tall building, look for the pointed arches, flying buttresses, stained glass window designs, and gargoyle statues that might tell you that you’re in the presence of Gothic architecture, the style that captivated Europe throughout the Middle Ages and defined church, cathedral, castle and college designs for centuries.