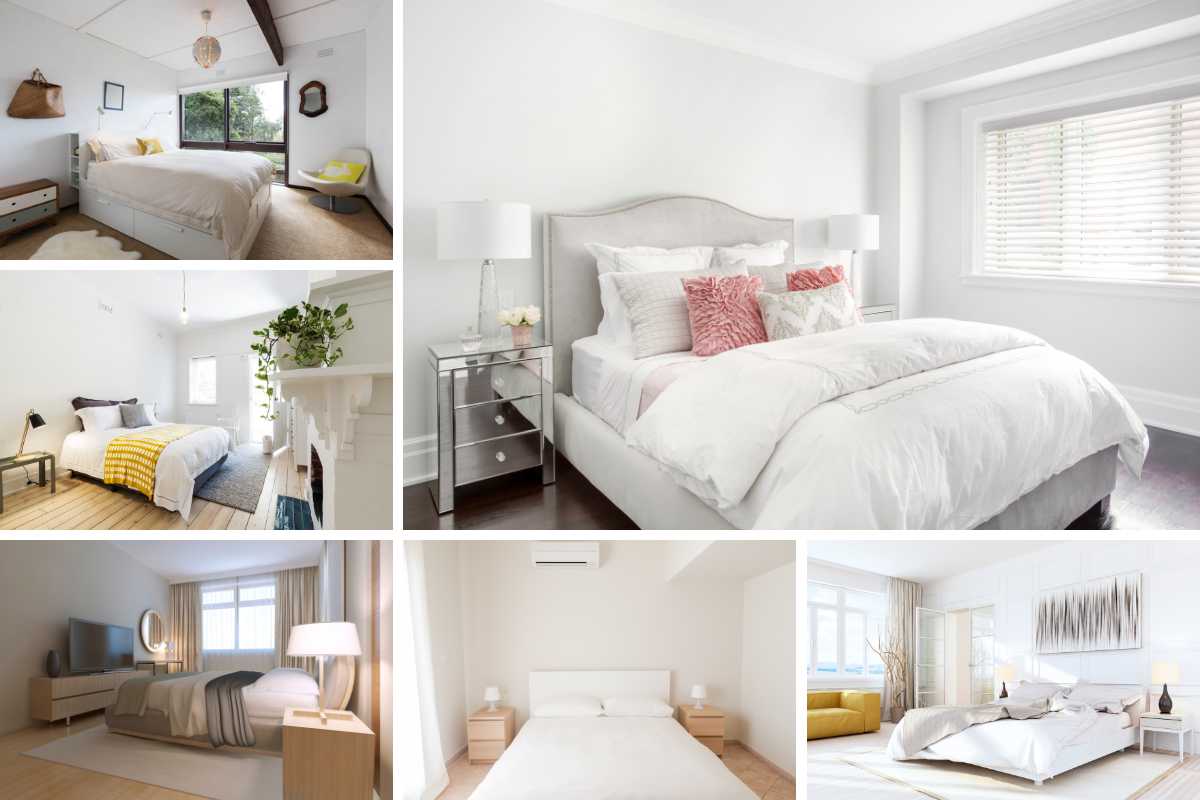 When it comes time to redecorate a house, repaint a room- or a number of rooms- one of the go-to “press the easy button” decisions people often come to is “why not just use white for everything?” Sure, it seems like a simple idea, and it is. But when you really try to put it into use you will find, as many have, that using the same color or tone in every room can get boring rather quickly.

What’s more, it can be easy to lose track where one area ends and another begins. This is especially true when you’re decorating for a whole family and each person has drastically different tastes. Add in a guest room, and you’re adding a whole new layer of complexity to the equation.

Perhaps more than any other room in the house, a guest room should be outstanding in some way- if only to help remind your guests that they are, in fact, guests and not a permanent addition! Fortunately, there are many compelling and different shades and tones of “white” that can be used throughout the same building to create contrast and express different moods all while adhering to the no-nonsense, simple effect that you were going for in the first place. Because of the highly reflective nature of white, it’s easy to create many different versions by adding subtle mixtures of red, green, and blue.

Change the color variables just slightly, and you get an entirely different look and feel for your shade of white. To that end, here are our top picks for the best white paint color options for guest bedrooms.

There are literally hundreds of different variations of white paint on offer from a wide range of manufacturers. For our purposes, we decided to narrow our options down to those produced by paint manufacturers who have been in the business for at least 20 years, serving the majority- if not all of North America- for the better part of that time. That leaves us with the three leading paint brands; Benjamin Moore, Sherwin Williams, and Behr.

Many of these colors are rated for their “Light Reflectance Value” (LVR) or luminescence. This is a measure of what percentage of light is reflected by the pain. Higher values are brighter, while paints with lower values are more light absorbent and appear dimmer in tone.

Owned by Berkshire Hathaway and founded in 1883, the Benjamin Moore Company is based in New Jersey and has been a leading North American paint manufacturer for well over 50 years. They produce many fine interpretations of classic off-white, ten of which have made our top 20 list. 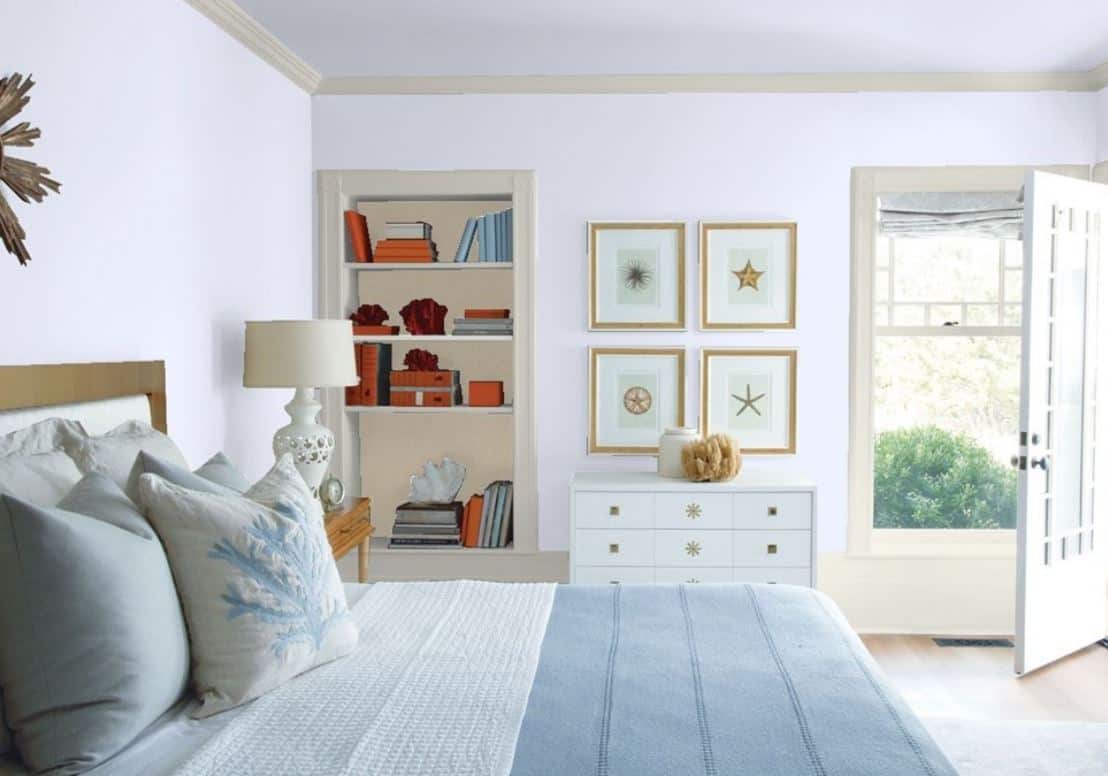 With a high luminescence value of 78.45 and very subtle inclusion of sky blue, White Heaven is recommended for rooms intended to be awash in natural light with a feeling of openness. You may also like White Paint Options Family Room! 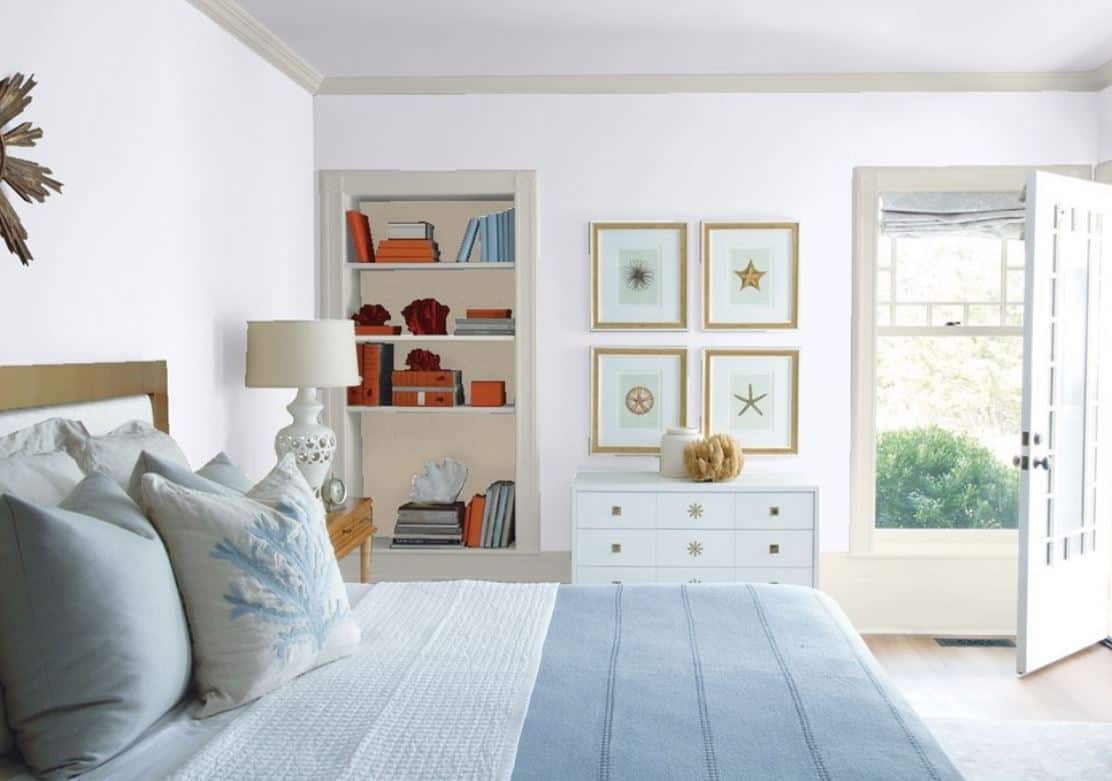 One of the brightest of all the white variants on the market, Polar White has a moderately high luminescence value of 81.21. With its high LVR, it might be hard on the eyes in rooms that are especially light permissive- might be best for rooms with windows and openings not directly facing the most sunlit side of the house. 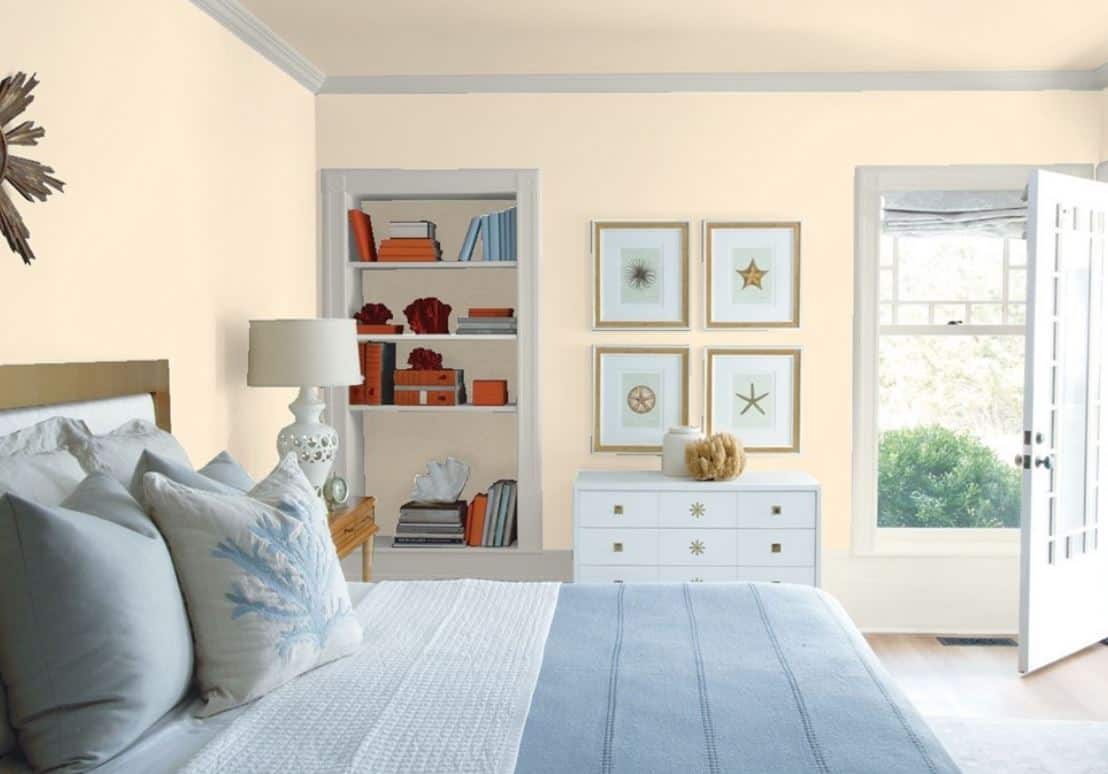 With its strong overtones of peach or coral and its very high LVR of 82.24, Country White is very cozy, and even surprisingly understated. It is an excellent choice for rooms with a heavy wood presence and for locations with a furnace. You may also like White Paint Options Kids Bedroom! 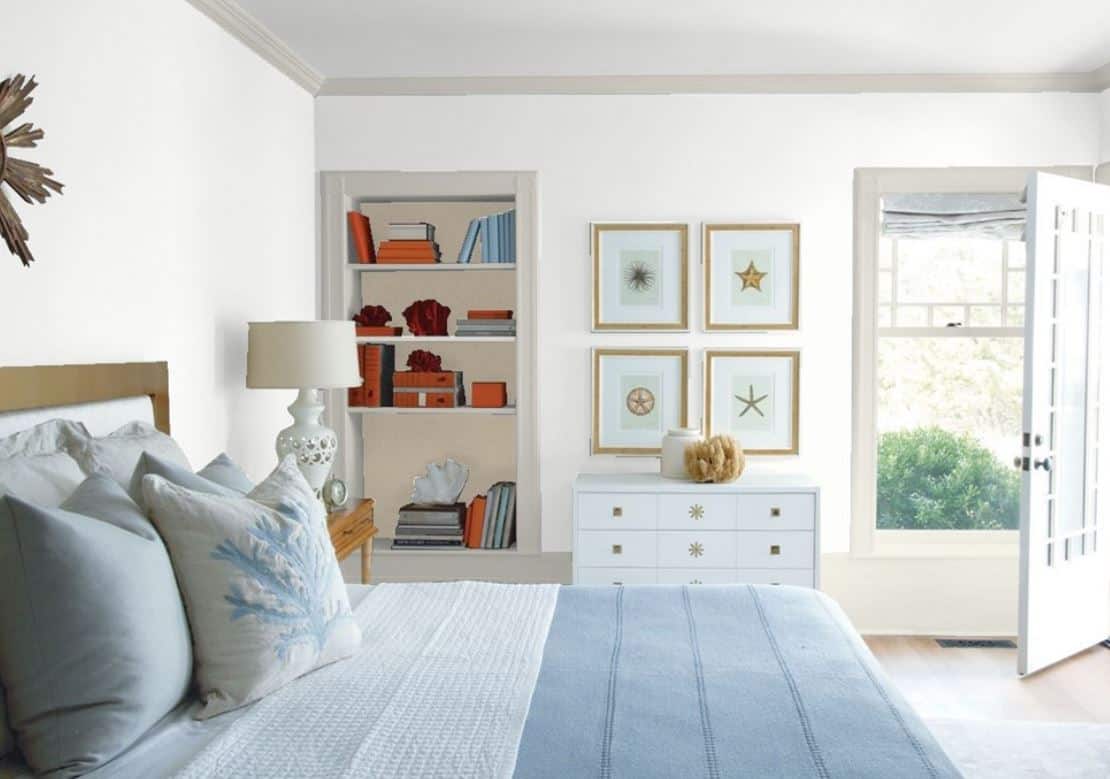 This is a classic, all-purpose white which is both crisp and versatile. Its high LVR of 85.27 is well balanced by its subtly earthen undertone, making it a great choice for nearly any guest room or other location. You may also check: White Paint Options Primary Bathroom! 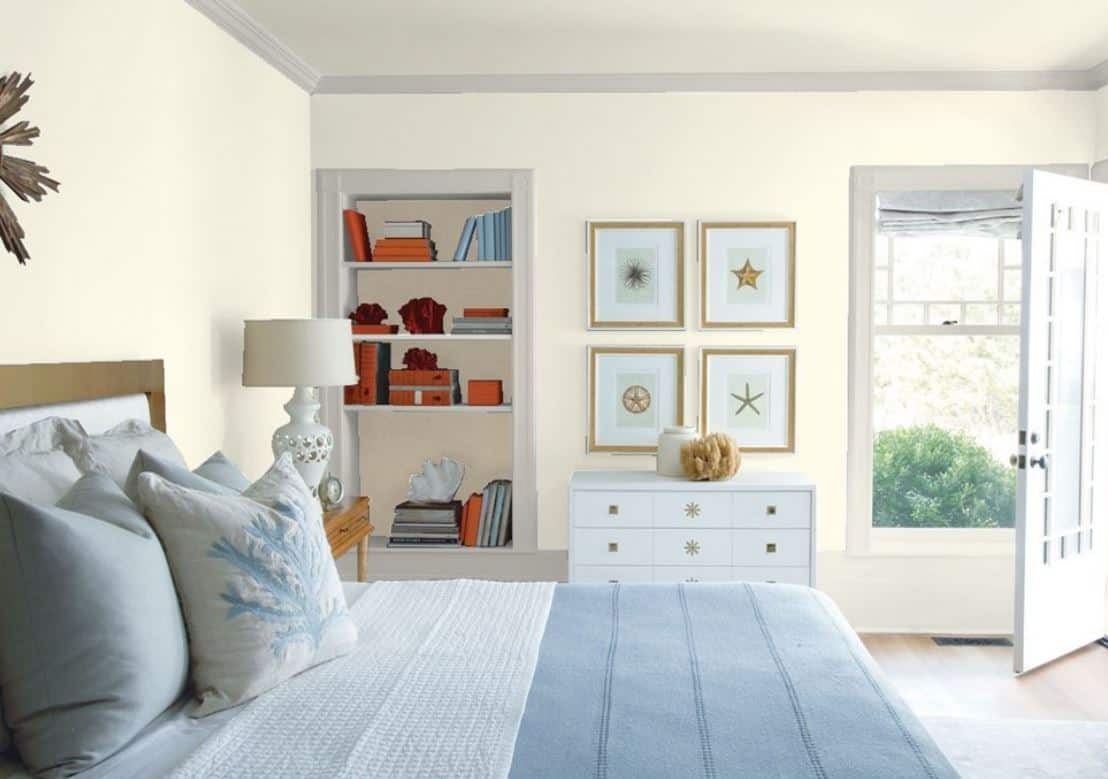 A strikingly sophisticated tone of white that is both unlimited in its versatility and nuance. Acadia White is well suited to more tranquil locations with its many subtle variations, adding a touch of serenity to any room despite its high LVR of 85.3. You may also like: White Paint Options Dining Room! 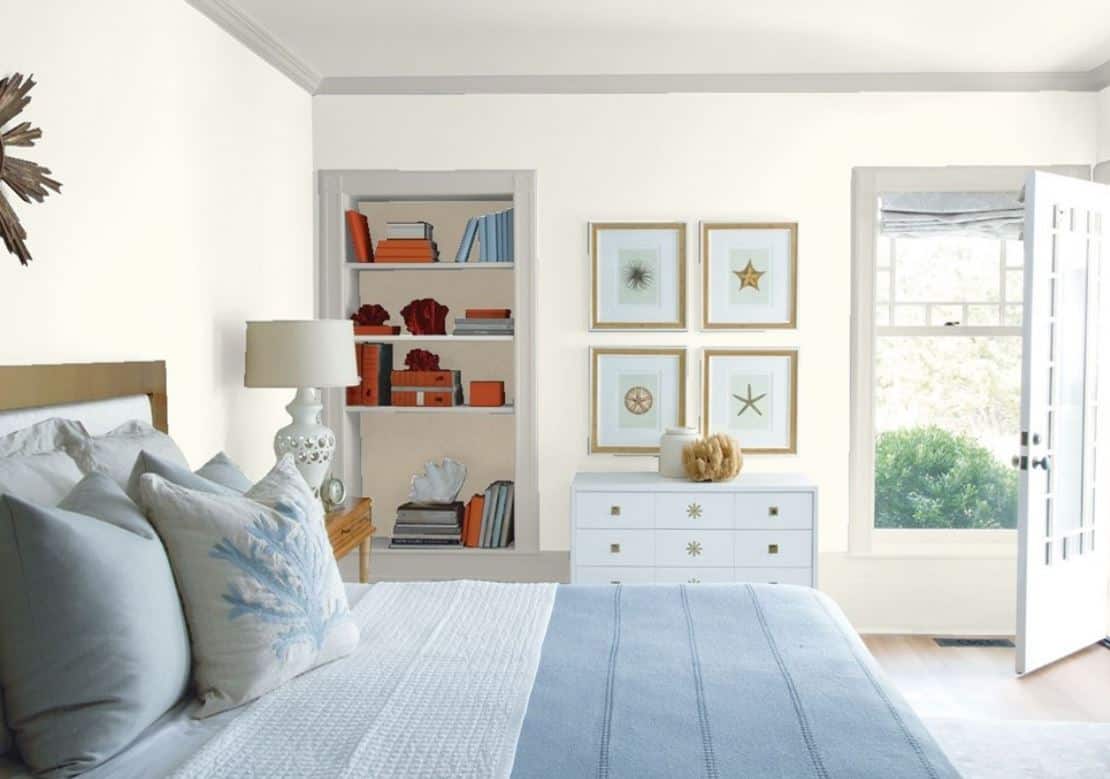 This outstanding shade of white is renowned for its high LVR of 90.58. It is at the same time bright and austere while remaining well suited to more nuanced spaces due to its ability to enhance other colors and accents. You may also like: White Paint Options Living Room! 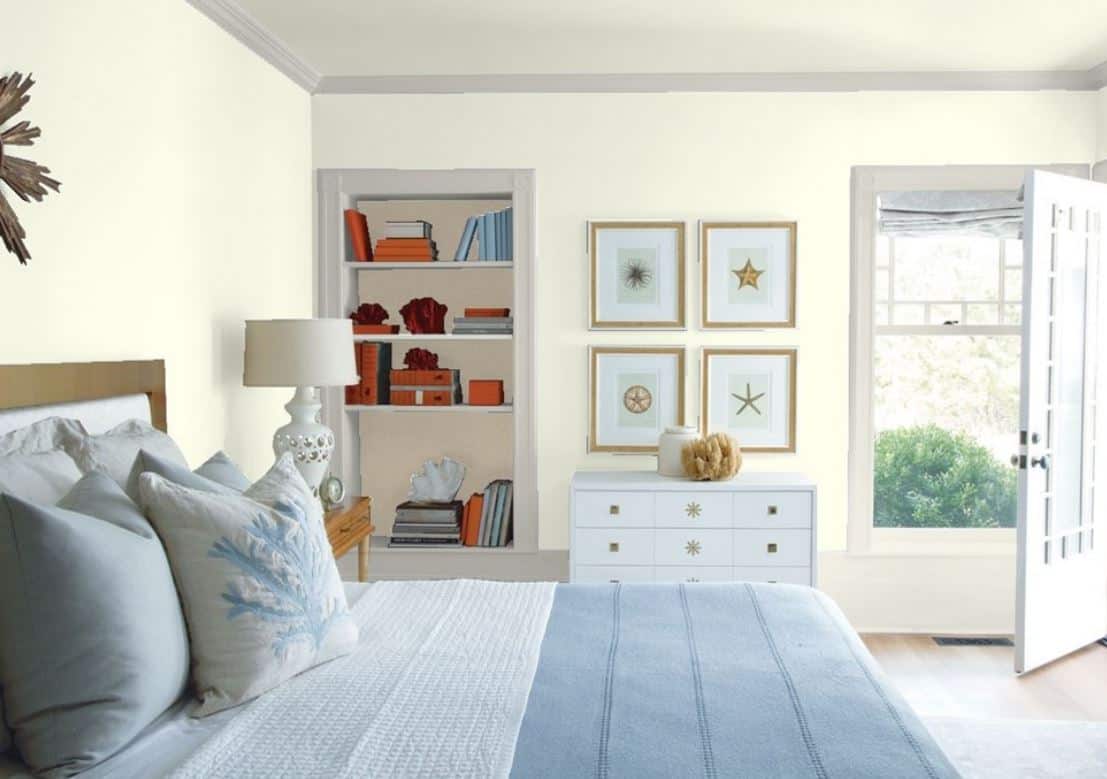 This bold and bright variation on the color white is excellent for breathing life into any space where it is used. It works well with any of the classic colors and is sure to bring illumination despite any nearby earthen tones and shade due to its startlingly high LVR of 90.05 and its illuminating character. 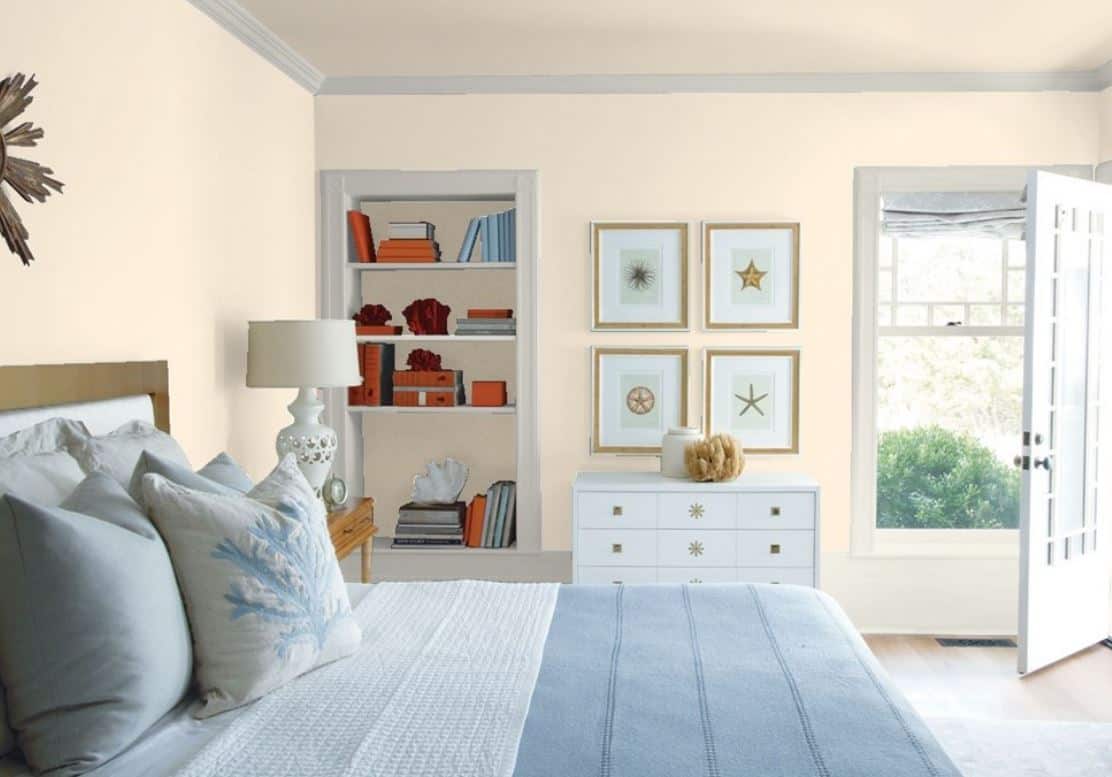 Noted for its ability to bring the enlightening character of white into any room without being disruptive in spaces intended for relaxation and reflection, it has a high LVR of 79.78 but manages not to be overwhelming due to the subtle inclusion of coral. You may also like: Gray Paint Options Guest Bedroom! 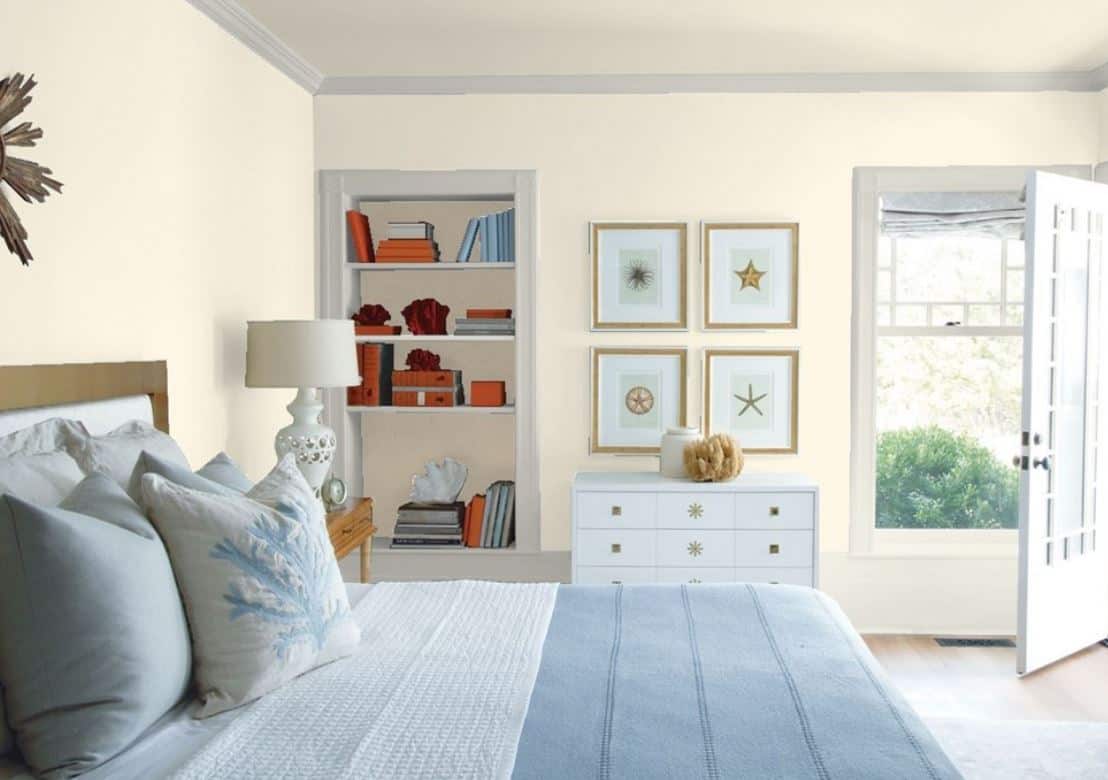 A favorite of decorators, linen white brings the feeling of illumination, with the comforting suggestion of cool, light linen. It offers a high LVR of 82.9 but remains inviting due to its ability to subtly suggest fabric- hence its name. 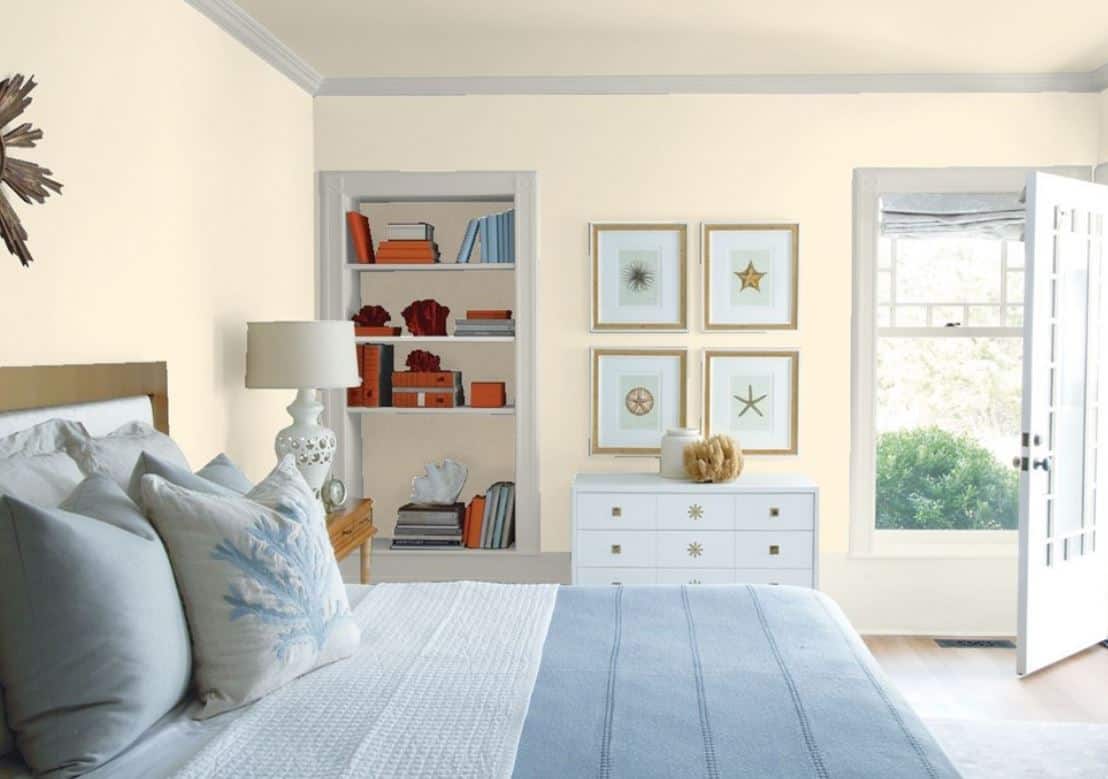 Part of Benjamin Moore’s Classic Color Collection, this timeless and elegant shade of white suggests the grandeur of the great outdoors with its high LVR of 82.39. This shade has inspired professionals for decades and is a favorite of homeowners as well. You may also like: White Paint Options Primary Bedroom!

A Fortune 500 company and headquartered in Cleveland Ohio, Sherwin Williams has been in the business of manufacturing high-quality paints and building supplies for over 154 years, serving North America and most of Europe. We selected nine of their premium off-white paints for our top 25 best white paints. 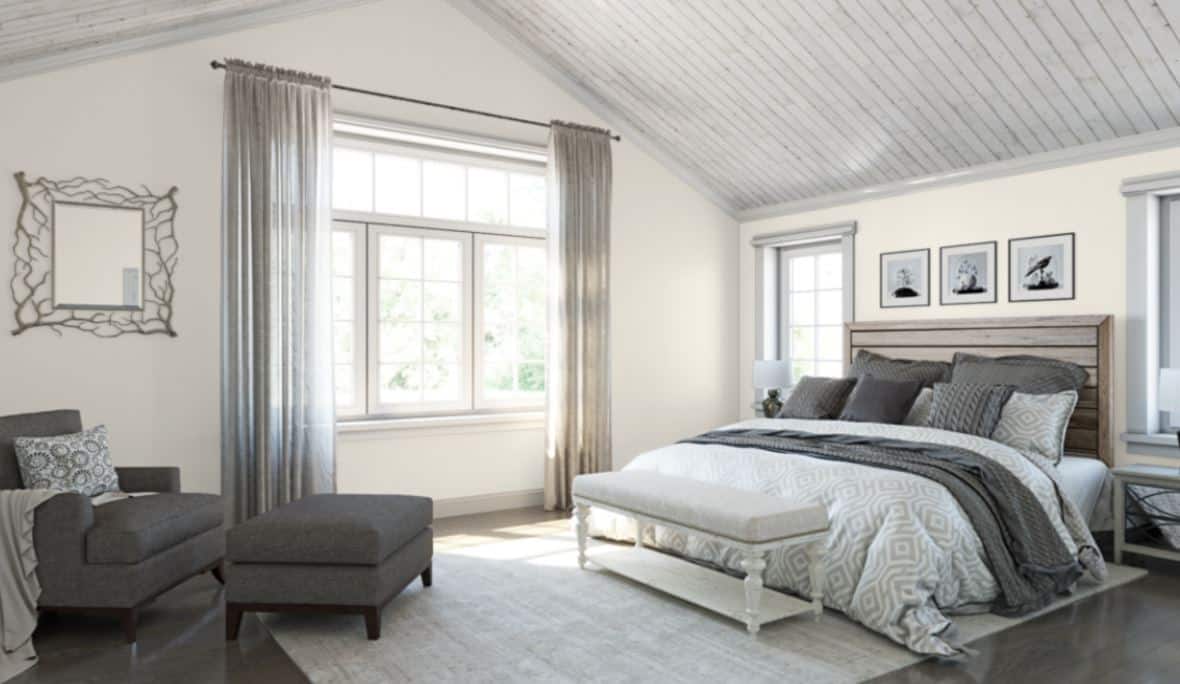 As one of the furthest from white of the off-whites, Whitetail is high in both red and blue with a remarkably high LRV of 86. This makes it both ideal for providing the illuminative properties of white while remaining agreeable to a whole slew of deeper tones and colors. 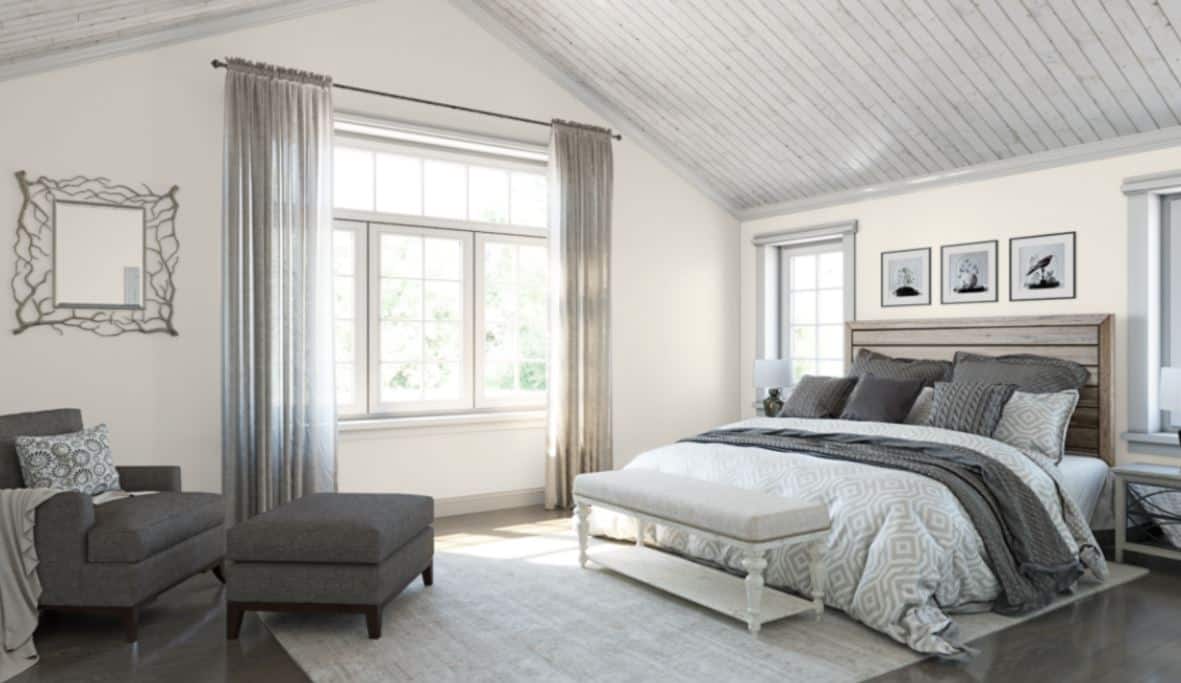 A popular choice for kitchens and kitchen adjacent areas, White Flour subtly suggests food prep with its high green highlights but retains an energetic feeling with its noticeable reds. It has an LRV of 87, making it excellent for pantries and walk-in spaces where light may be spare. You may also like: Blue Paint Options Guest Bedroom! 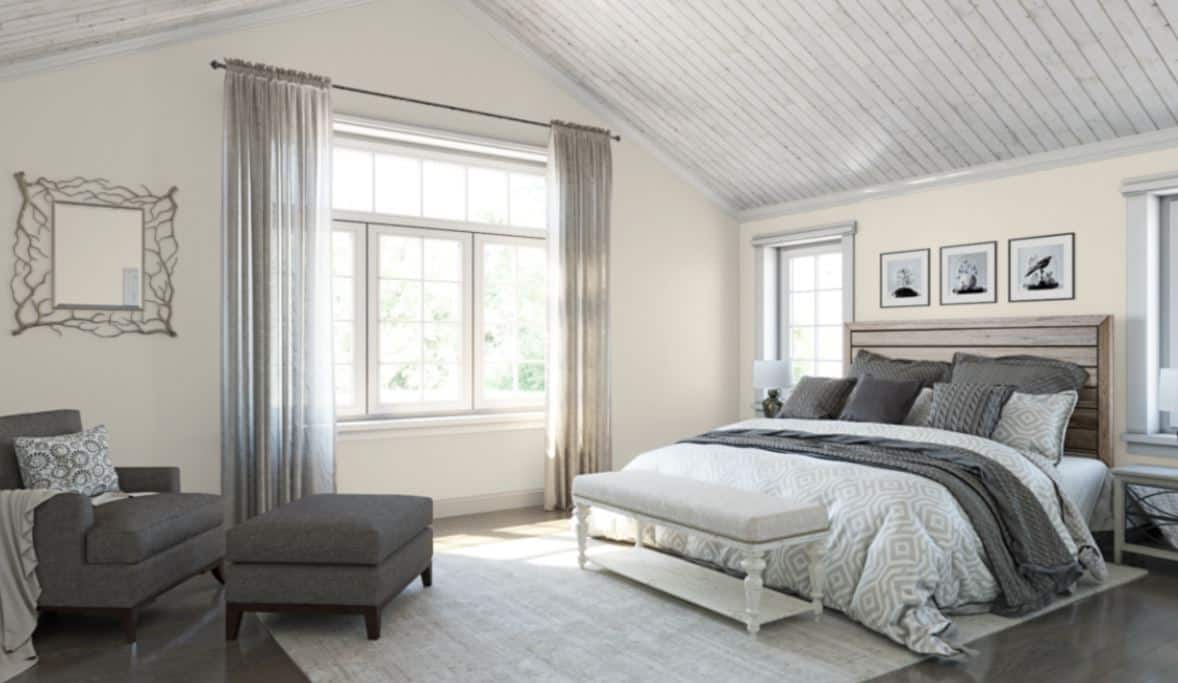 This shade of white is an excellent choice for more rustic and wood-heavy rooms. It’s relatively low blue component allows its reds to stand out while not being overwhelming. It has a low to medium LRV of 74, contributing to its subdued character. 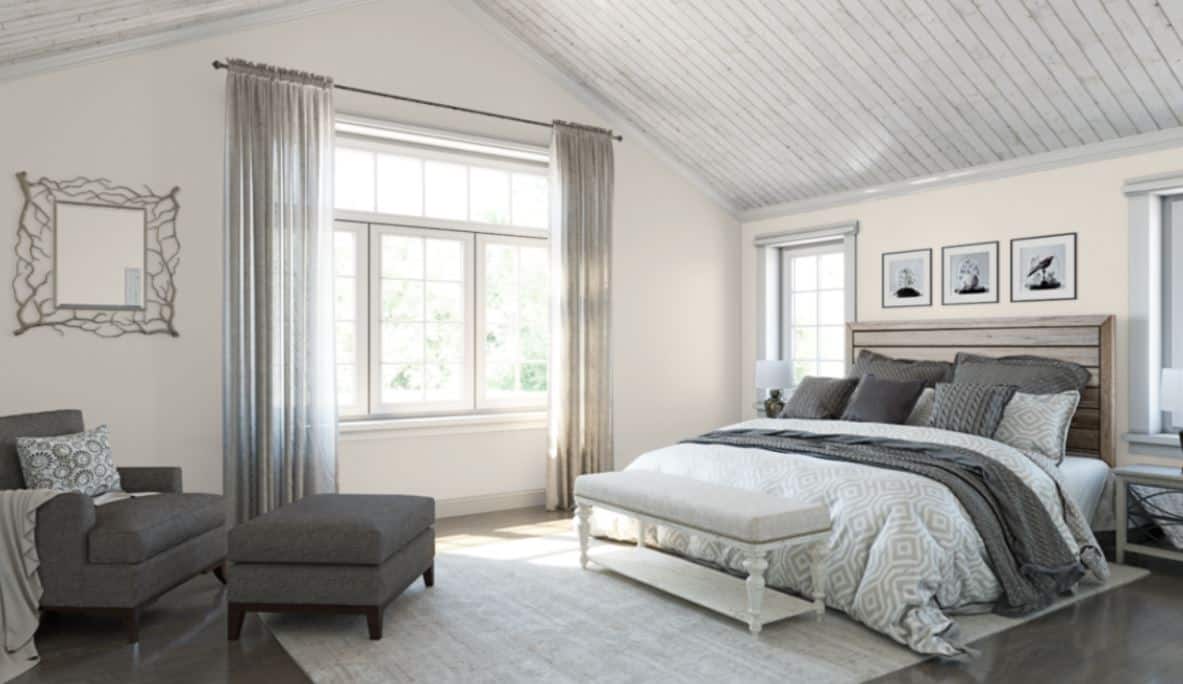 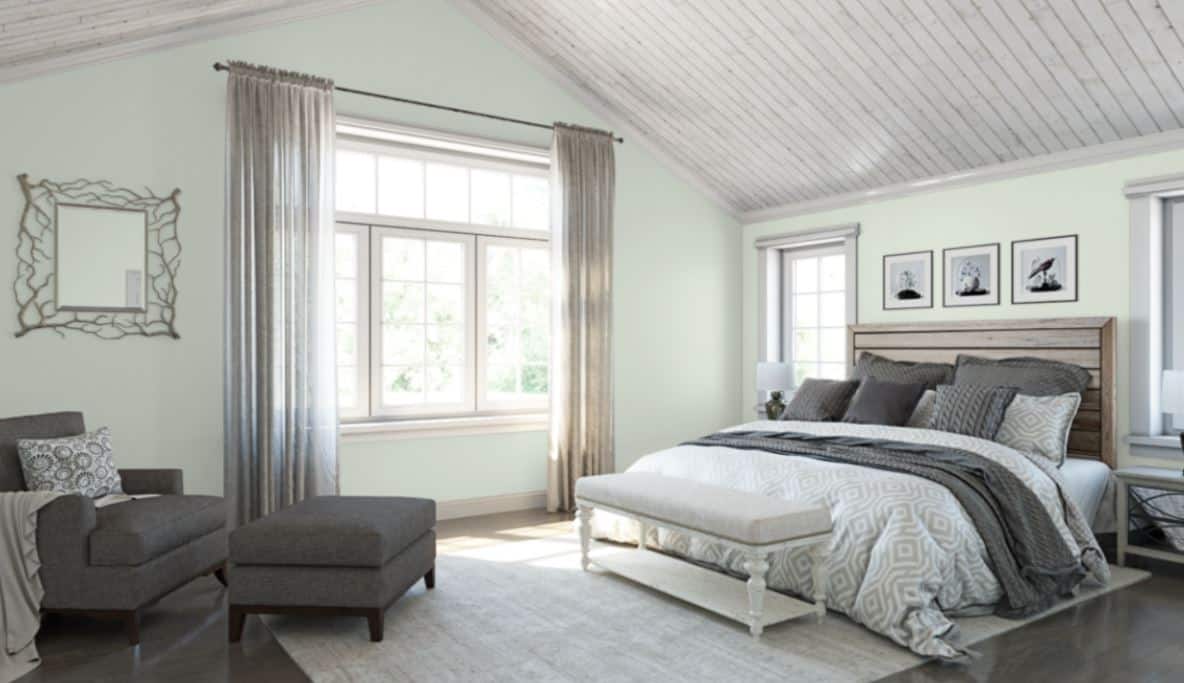 A crisp and even playful variation on the off-white theme, White Mint goes well with Extra White, Relish, and even Pure White. Containing more green than red or blue, its minty nature is obvious at a glance. With a high LRV for this class of off white, it helps provide light for occasions where apportioning late afternoon treats might be in order. 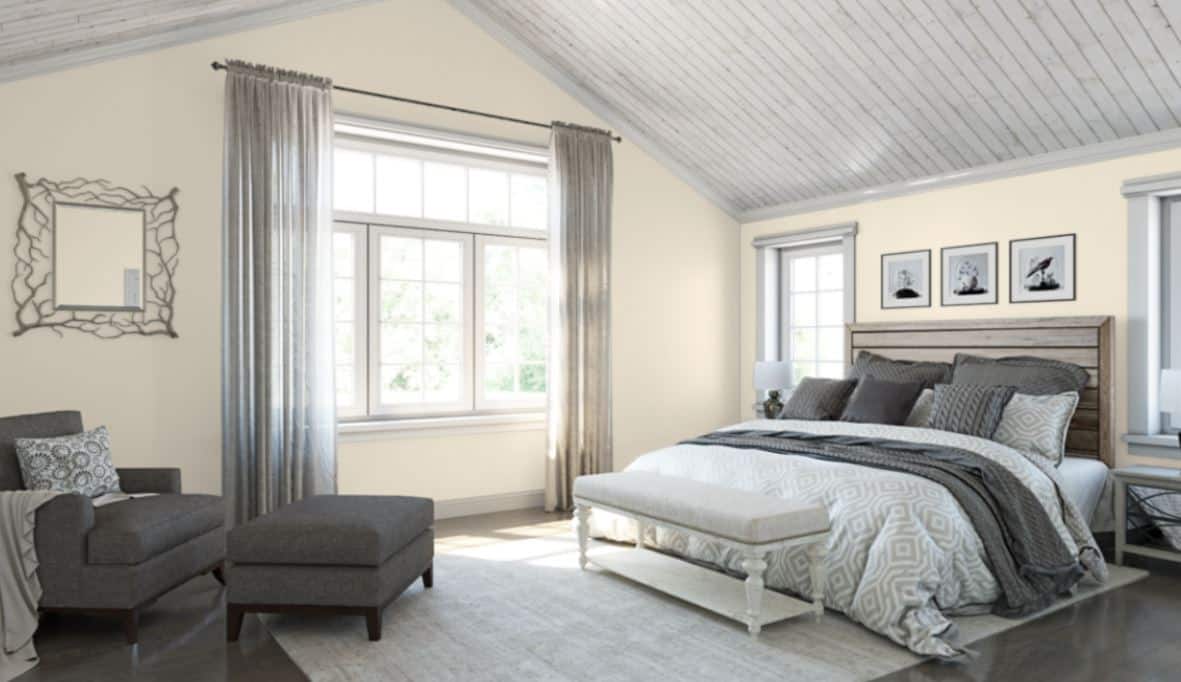 Both high in red tones and possessing a high LRV of 86, Honied White has an unexpectedly noticeable coral-like character for its name. It’s particularly low blue tones help make it amenable to its common coordinating colors Honed Soapstone and French Moire. 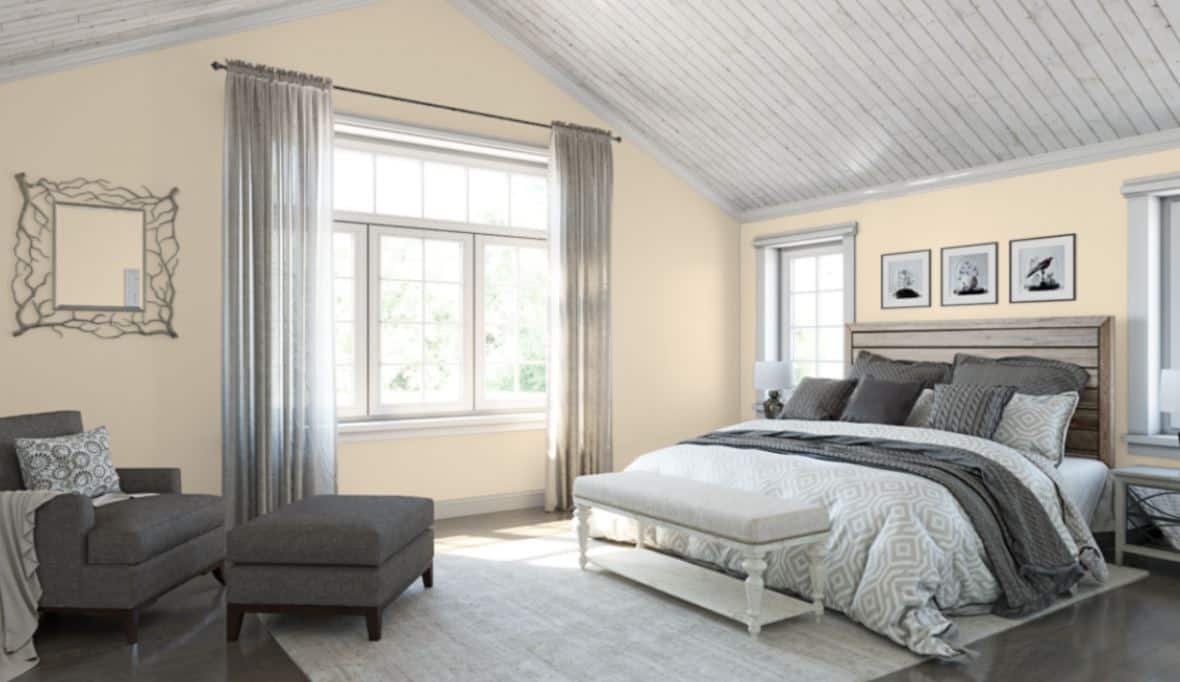 A subdued common companion to Dover White Lullaby, and Creamy- Welcome White obtains its calming character by its consistently low RGB components and its moderate LRV of 78. This makes it ideal for communal rooms and bedrooms alike. You may also like: Beige Paint Options Guest Bedroom! 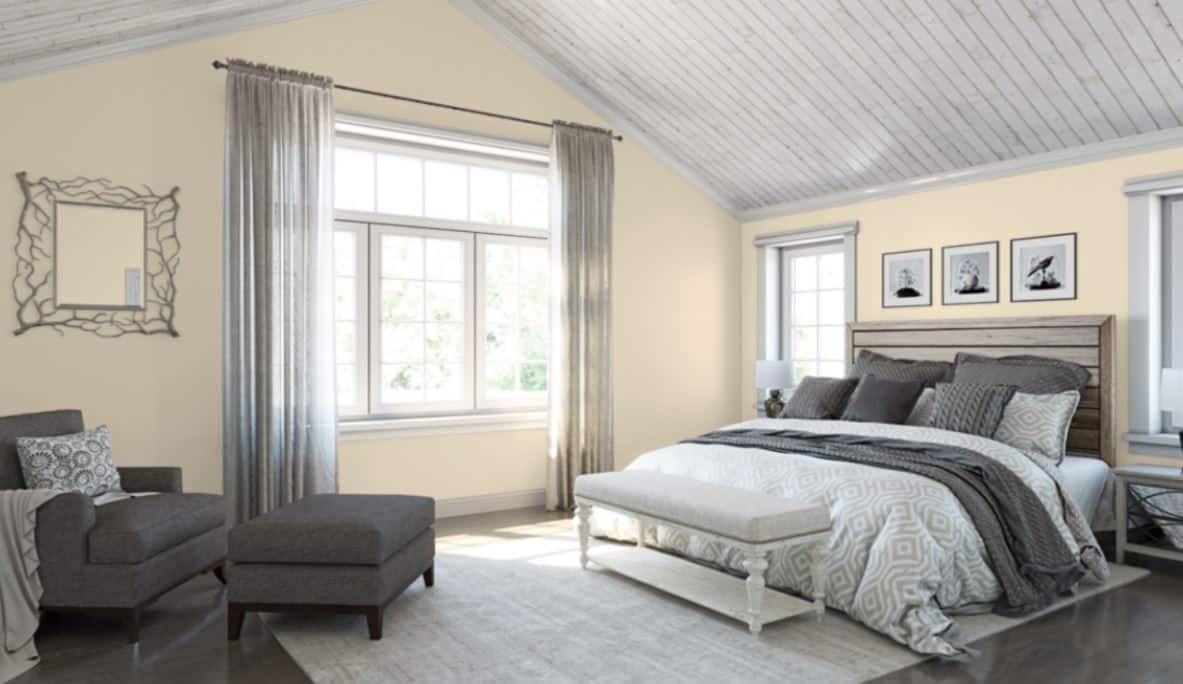 The oft unexpected companion to Marshmallow, and Creamy, Vanillin is surprisingly similar to Khaki and is often paired with Khaki Shade. It is high in red, low in blue and moderate in green with a conservative LRV of 78. You may also like: Red Paint Options Guest Bedroom! 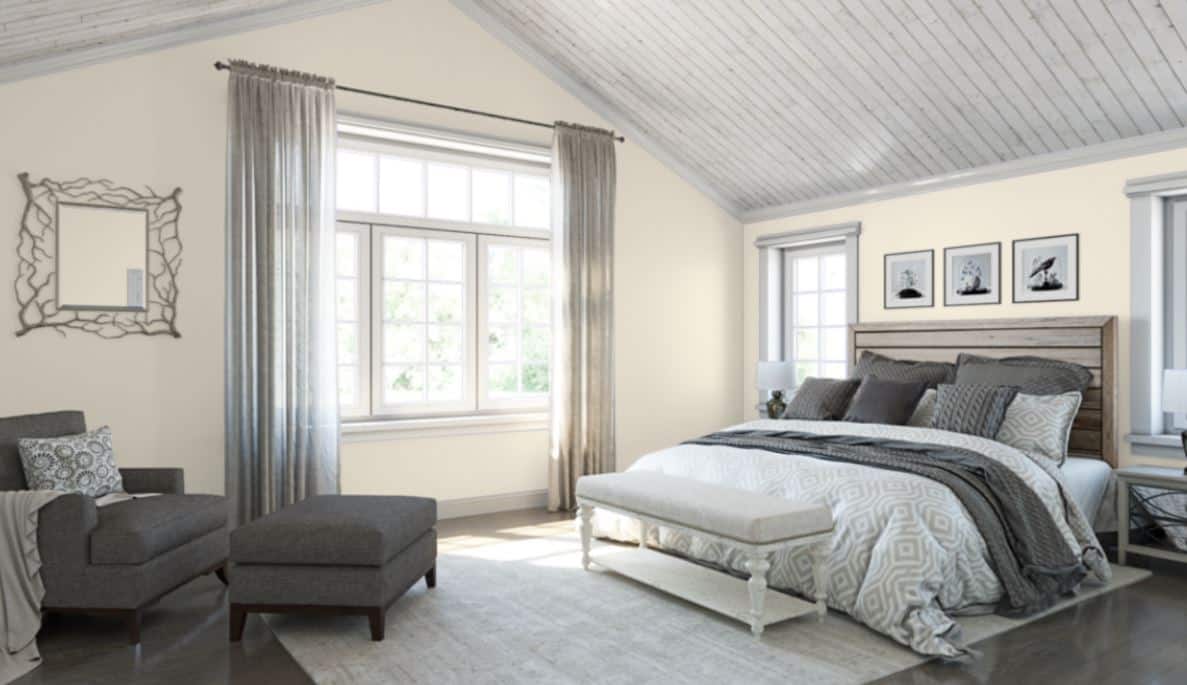 A soft, yet sturdy shade of off-white, Paperwhite is high in reds, low in blue, and moderate in greens. Still, it has a striking LRV of 87, making it an excellent choice for pairing with other high-red off-whites like Chopsticks and Caramelized. You may also check: Green Paint Options Guest Bedroom!

The youngest member of our list of top paint manufacturers, The Behr Process Corporation was founded in 1947 by Ortho Behr, Jr. They are among the best-known suppliers of architectural paints in the United States and Canada and have enjoyed the strongest growth curve of all the companies with paints on our list. We selected five of their finest premium off-white paints for your consideration. 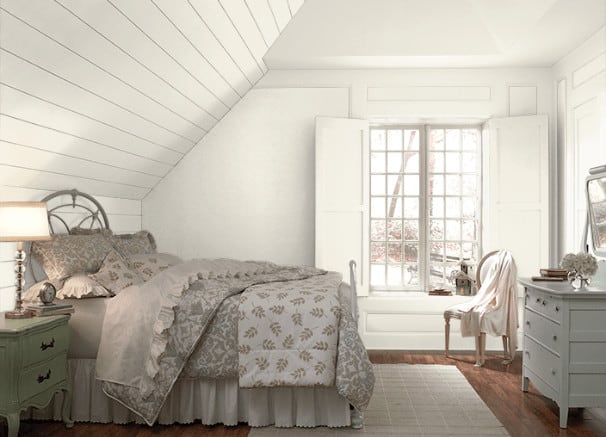 This popular shade of white, a go-to for decorators and homeowners alike- is low in both green and blue, and only moderately high in red. This gives it its strong chocolate or coffee-like character. It is considered unique for its cafe-like quality mixed with its high LRV rating of 84, which gives its strong luminescence attributes that maximize the available light in the room.

This color is ideal for rooms where lighting will be used sparingly. 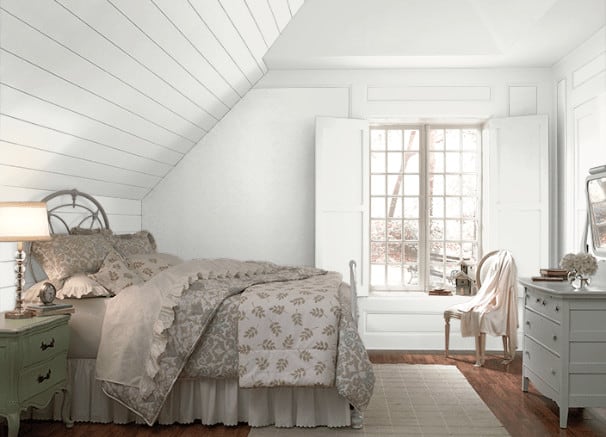 Named simply white, this particular shade of white has much more up its sleeves than the name suggests. It is low in all three red, green, and blue values- but is lowest in blue. That grayish admixture combines with its comparatively high LRV of 83 gives it a smoky appearance which makes it ideal for bedrooms, bathrooms, saunas, and outdoor sunbathing areas. 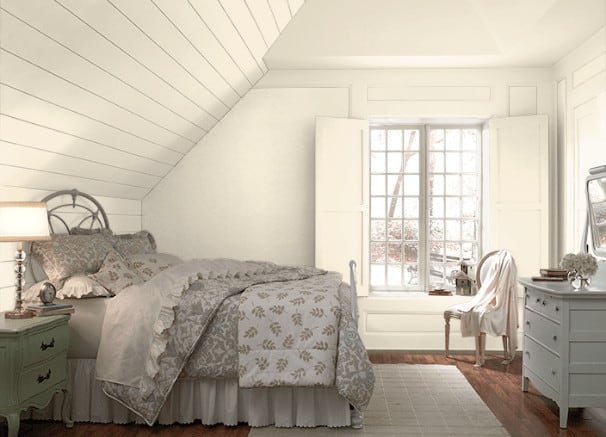 Similar to Benjamin Moore’s Linen White with its peak reddish tones and low blue highlights. Where Behr’s Linen White stands out, however, is in its higher LRV of 85. This gives it a sunnier disposition to give a person the feeling of seeing sunlit bed linen hanging from a drying line on a breezy summer day.

It is a natural companion to Rococo Beige and Frittata, both of which are similar in character but sufficiently different to provide plenty of contrast. 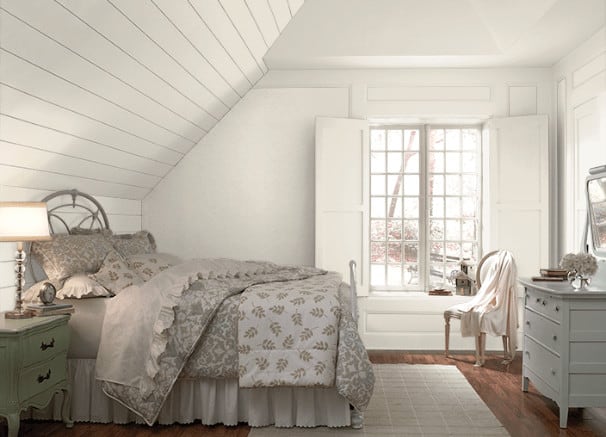 As the name suggests Cotton Knit offers the coolness of fresh linen with the comfort of the natural fabrics that its subtle intonations imply. This is a solid, grayish-white shade of off-white with Red, Green, and Blue components all tending toward the lower ends of their scales. It features a moderate LRV of 74, making it- not dull- but only just subtly luminescent in the right light.

It is ideal for bedrooms and bathrooms, with a potential for outdoor bathing areas. 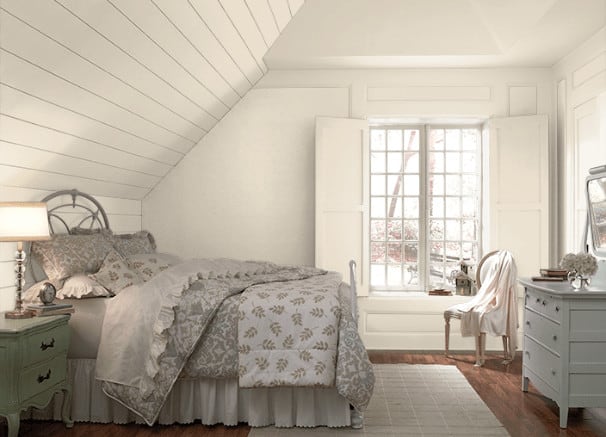 If you’ve paid attention to our notes on RGB mixing and LRV levels, then you will already have a good idea what’s in store with a name like Antique White. With very low blue, low green, and nearly moderate red, this shade of white suggests antiquity, with elegance, and perhaps just a touch of winsome weathered-ness with the not overstated oxidation red highlight. Its modest, yet not quite diminutive LRV of 73 gives the muted luminescence of an ancient piece of stonework with all the suggested historical winsomeness.

It goes well with its companions, Pashma Brown and Authentic Tan. 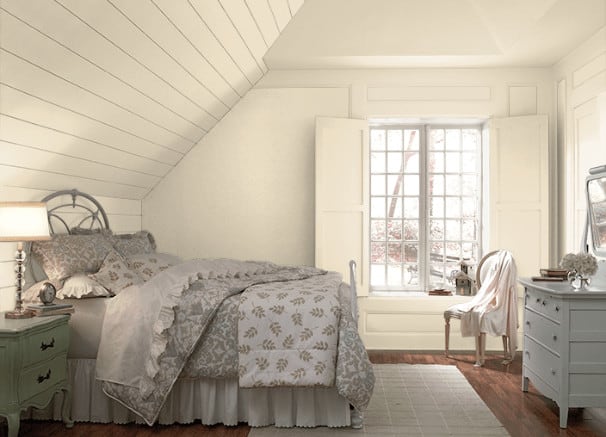 Where Navajo White stands out most is in its very low presence in the Blur register. It is also low in red and green- but least color-phobic when it comes to its red tones which approach moderate. This gives it a very subtle red character which, like in Antique White, suggests subtle oxidation- implying age, class, and historicity.

These qualities make it ideal for a study or for an artist’s workshop. Although it would be equally welcome in a kitchen or reading room. Compared to its bashful color highlights, Navajo White’s LRV is high at 74. This gives our Navajo White a luminescent quality that contrasts its reticence toward color.