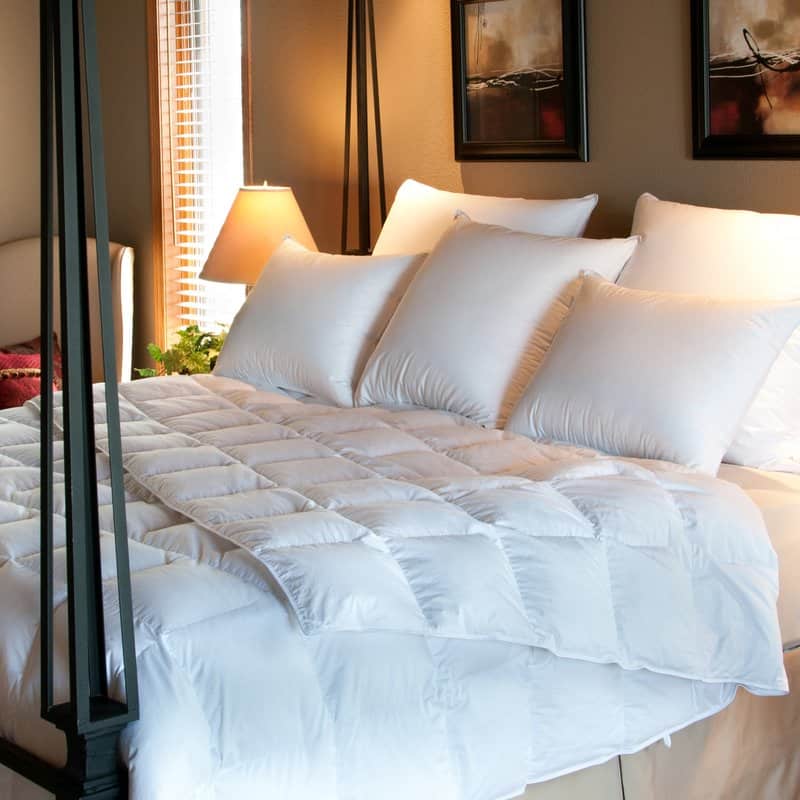 Duvet vs. Comforter: What’s the Difference?

If you confuse a duvet with a comforter, you’re not alone. Plenty of people use these terms interchangeably. But if you’re going to buy a new duvet for your bed, it’s worth knowing the difference so you can find the right one.

A duvet is a soft, puffy blanket filed with down used to keep you warm. They may come in heavy or light versions for different seasons. Most duvets are white, and you’ll add color by adding a duvet cover, which envelopes the duvet.

A comforter performs a similar function to the duvet, but they’re typically filled with synthetic materials rather than down. Comforters also often have colors or patterns on them, and they don’t need a cover.

3 Tips for Choosing a Duvet

Here are three quick things to consider when searching for the right duvet.

Buy According to Temperature

One of the keys of buying a duvet you’ll love is to go for a duvet suitable for the season. Here’s a guide to what’s comfortable and when:

A year-round duvet is fine when you live in a temperate climate where the weather doesn’t change significantly. It will also suit you if you tend to rely heavily on your heating and cooling system when temperatures change.

However, if you tend to rely on your windows for circulation or you time your heating and cooling, then you’ll want to buy a duvet for the summer and the winter.

You’re likely accustomed to worrying about the thread count in your sheets, but it’s also important to consider in your duvet. Although you’ll use your duvet with a cover, a higher thread count maintains the integrity of the whole blanket by containing the down.

A thread count of 300 is a safe bet; any higher is superfluous.

Most duvets come filled with down because its breathability and light weight make it hard to beat. Look for “100% down” or “all down” on the label. Without it, you might end up with a duvet made up of fill with 30% down.

However, there are down alternatives available for those who are allergic to feathers. These are hypo-allergenic and less expensive, but they’re often less breathable than down.

Ready to buy a new duvet? 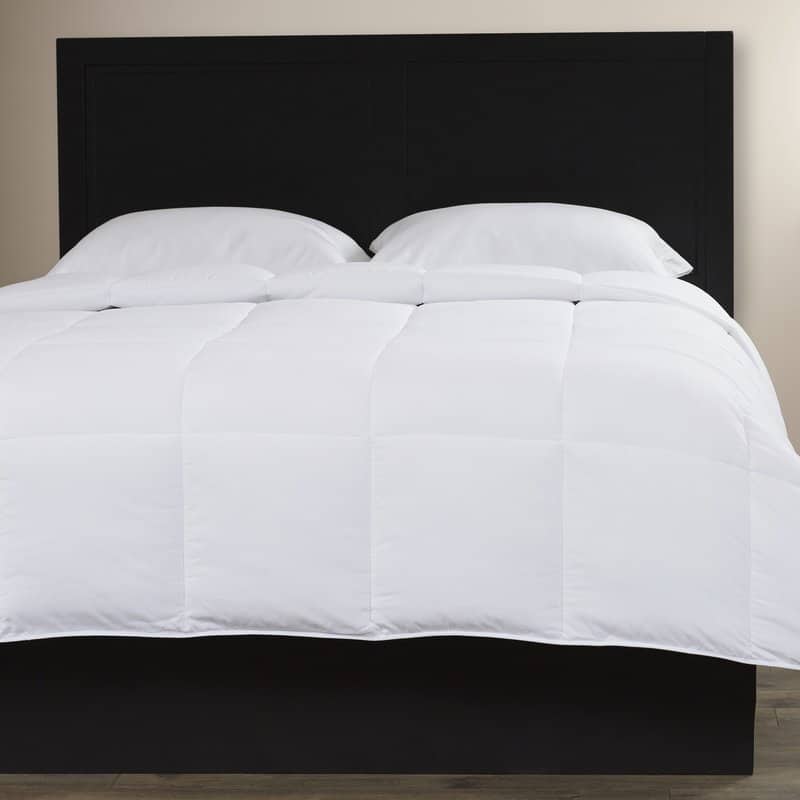 The first duvet on our list is filled with down alternative and is a good choice for those in need of a hypo-allergenic duvet.

It includes a baffle box design with box stitching to avoid the filling from moving around.

This down alternative blanket from Alwyn Home is rated for all-seasons and is still lightweight despite having a microfiber filling. More importantly, it fits in a washing machine, so you can wash it when the sweatier months arrive.

2. 1000 Thread Count All Season Down Alternative Comforter by Alwyn Home 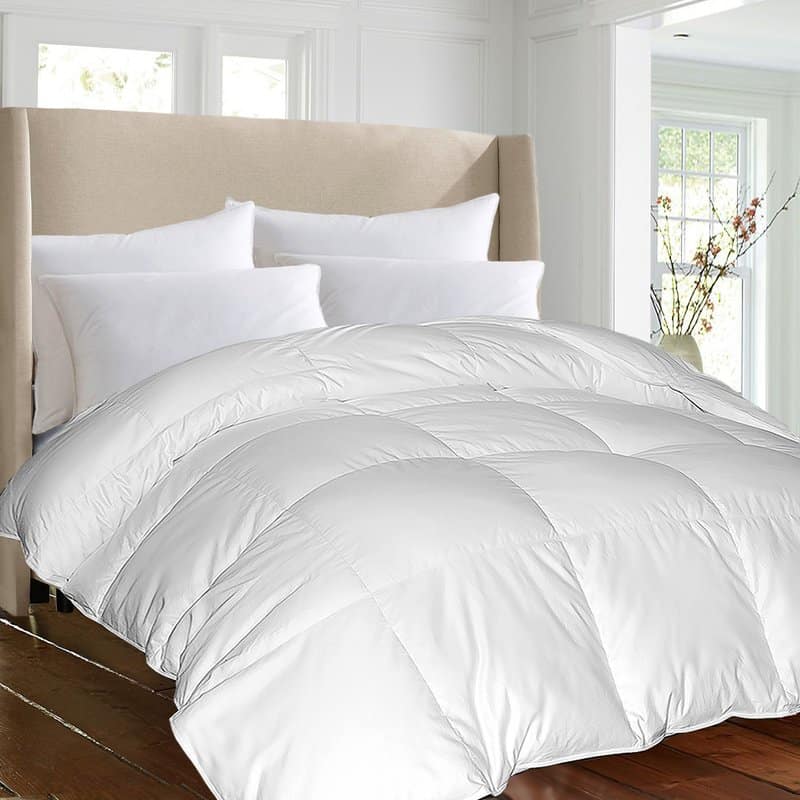 Here’s another version of an Alwyn Home down alternative comforter, this time it has a polyester fiber filling, which is fluffier than microfiber but doesn’t add heft.

We love that this comforter is oversized and the material is soft thanks to the thread count. However, we’ve also found that using a duvet cover is essential because washing it too many times can make it a bit lumpy.

Also, while it’s good for all seasons, it’s probably not well suited for Midwestern winters because it’s warm but doesn’t feel blizzard-ready warm. 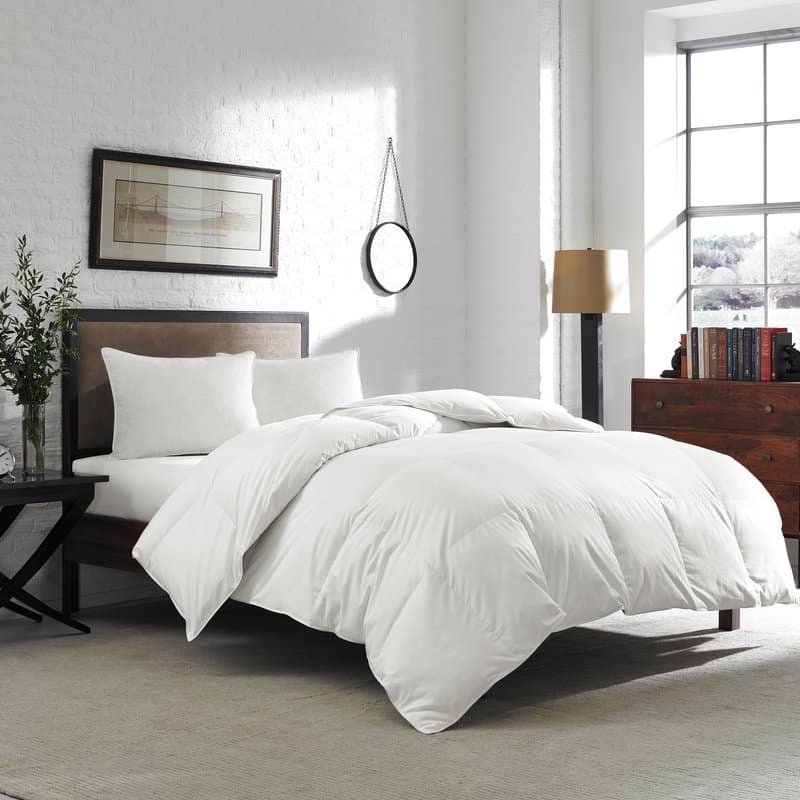 Here’s our first full down duvet – and it’s hypoallergenic!

With 600 fill power, this Eddie Bauer down comforter is perfect for all seasons and is heavy enough to be used through the winter. It’s constructed with the baffle box protection to keep the down spread evenly. The 315 thread count is perfect for helping it stand up to the test of time, making sure you don’t lose any of that valuable down.

Real down duvets can be expensive, and this is an affordable luxury. It’s constructed from cotton, so it even feels as soft as it looks. 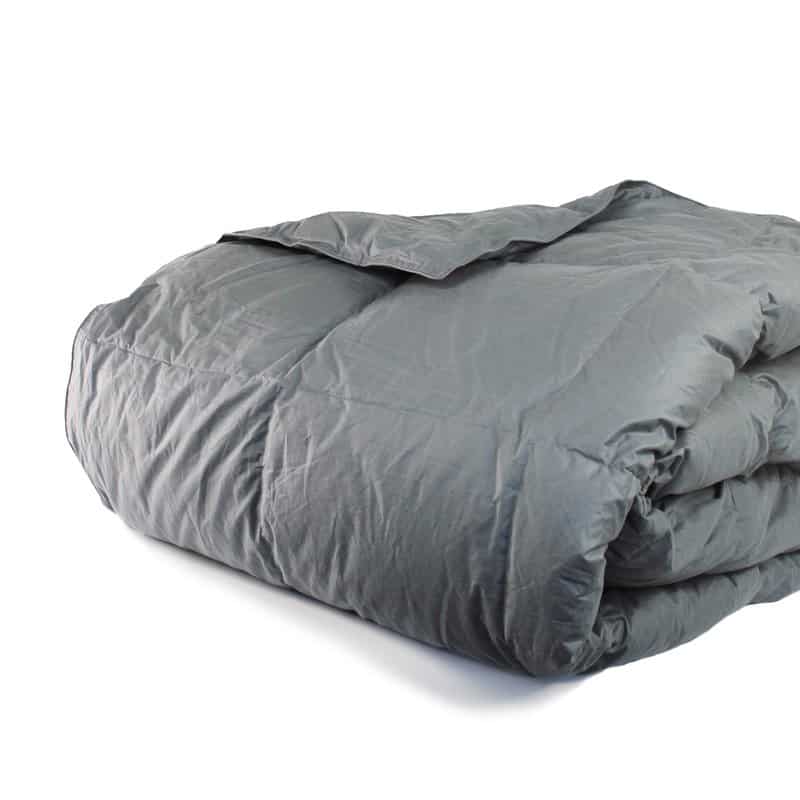 The Cloud Heavyweight comforter is our favorite of the heavy, winter comforters. If you’re looking to keep warm next winter, you’ll find this comforter in Twin to King size.

It’s filled with 100% polyester in a 100% cotton shell with a 233-thread count. It also includes box stitching to keep the fill in place.

It’s even possible to machine wash this comforter, as long as you wash it on cold and use the gentle cycle.

5. Goose Down Comforter by Westex 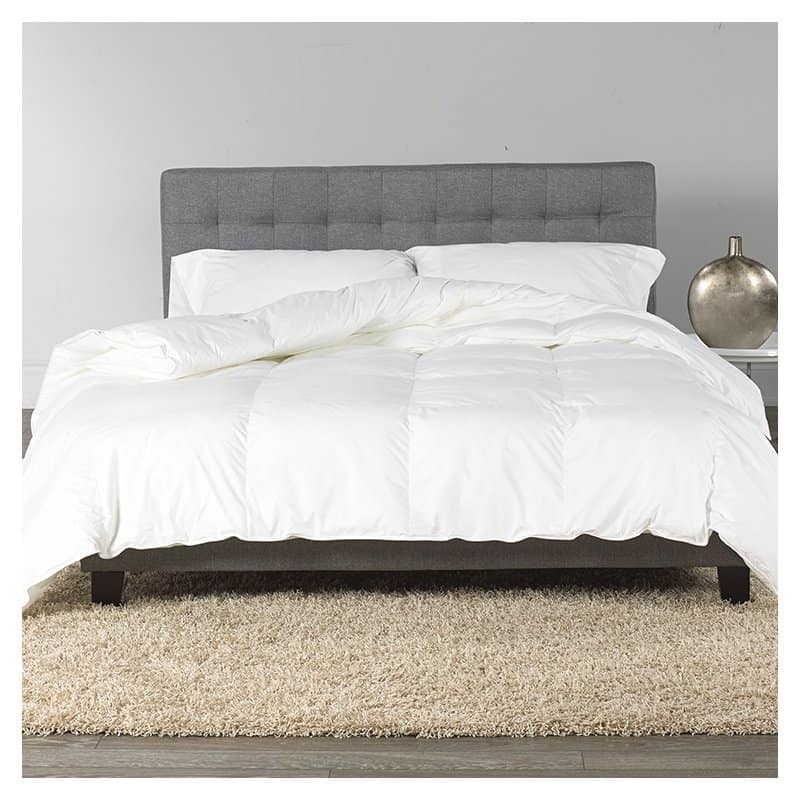 You know you’re getting quality down when the duvet manufacturer is a member of the Canadian down association.

Moreover, the Goose Down comforter by Westex is incredibly light – a double weighs 27 ounces. A good quality down is always lighter because more air is able to get trapped between clusters of feathers. The air has a moderating impact on the temperature, so you’ll stay warm without getting too hot.

Canadians know the meaning of frigid winters, so you know you can trust everything about this duvet.

Be sure to dry clean it to care for it properly. And if it doesn’t work out, remember Westex has a 10-year warranty. 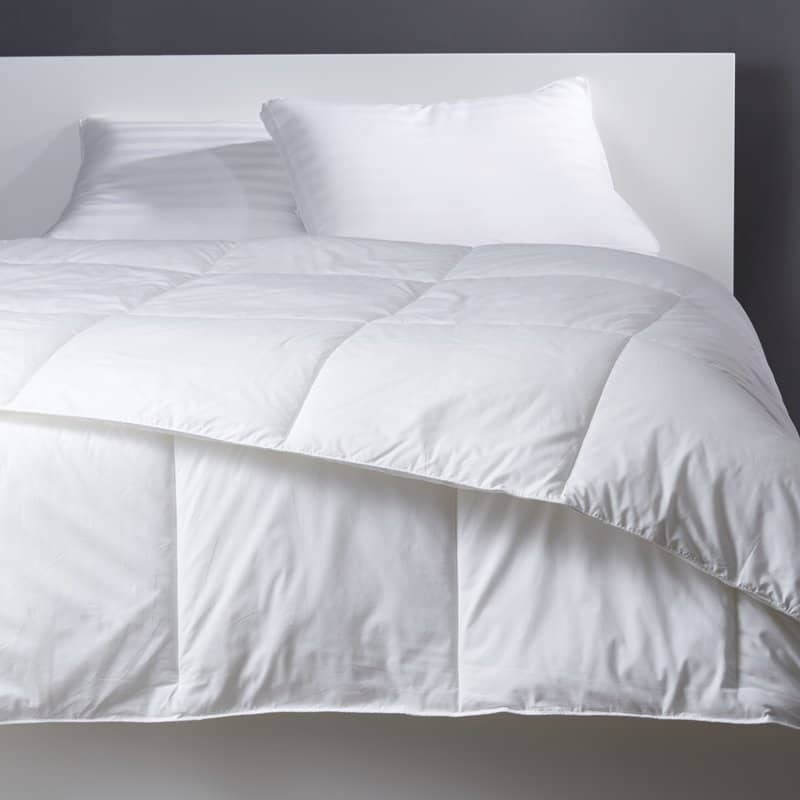 Alwyn Home offers a budget option for those who prefer a down blanket but don’t want to invest quite yet. The mix of 80% down and 20% feathers keep the price in check. However, it’s still an excellent buy.

In addition to being filled with goose down, the shell is also made from Egyptian-quality cotton.

Alwyn Home says you can use this with or without a duvet cover, but considering it’s a dry-clean only duvet, we suggest throwing a duvet cover on there.

7. Down Alternative Comforter by LinenSpa 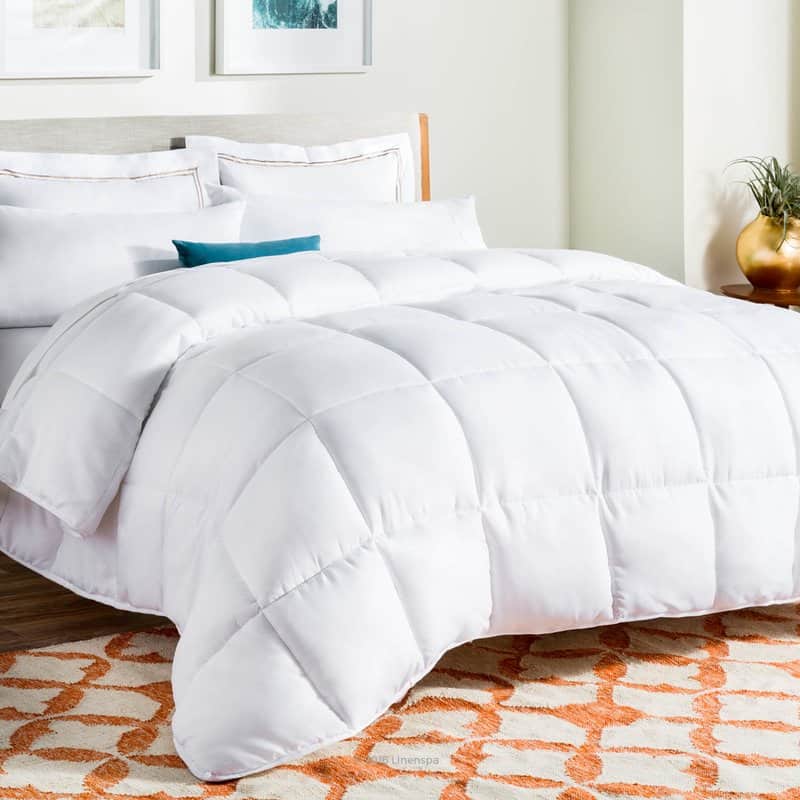 Looking for a classic down style without an effort of caring for a down comforter? LinenSpa’s Down Alternative Comforter is a great option.

The shell is made from microfiber, making it soft to the touch and hypo-allergenic. It also includes box stitching to keep everything in place, which makes it ideal for machine washing.

We love that this budget option doesn’t skimp on materials, there’s plenty of overhang for those who want it. 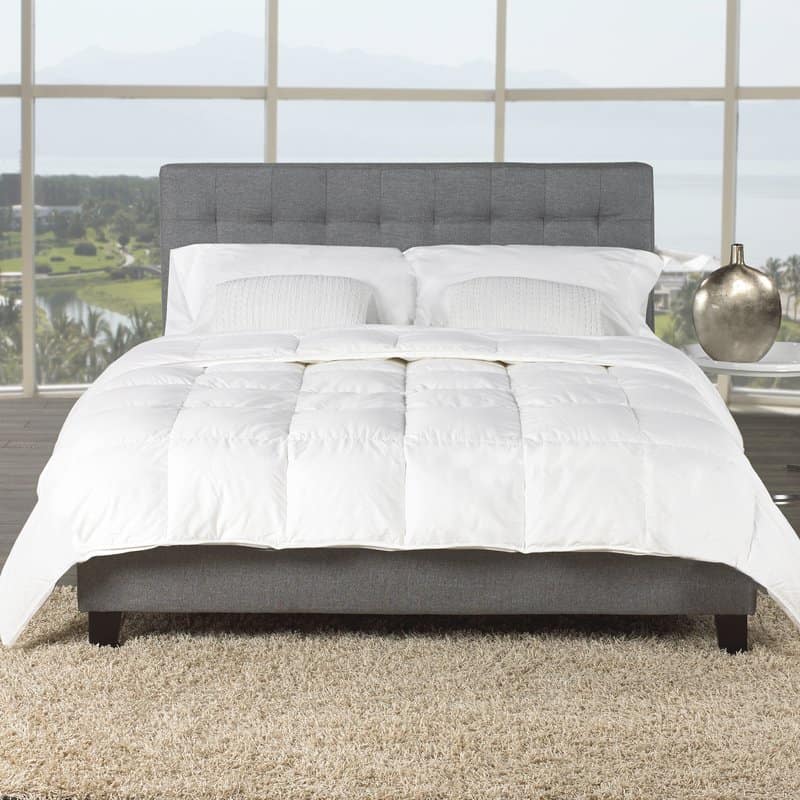 Here’s another duvet from Westex. We’ve added it because Westex makes quality products – after all, they know down better than almost anyone! As down experts, they’ve added Hutterite Goose Down to this duvet to make a great insert or comforter.

We like the Hutterite because they include high-quality goose down with a 100% combed cotton sateen shell with a 400 thread count for both comfort and quality. The down is also treated with Allernon-21® Ultra-fresh, which means it’s allergy-free, too.

9. Down Filled Fall Weight Duvet Insert by Down Inc. 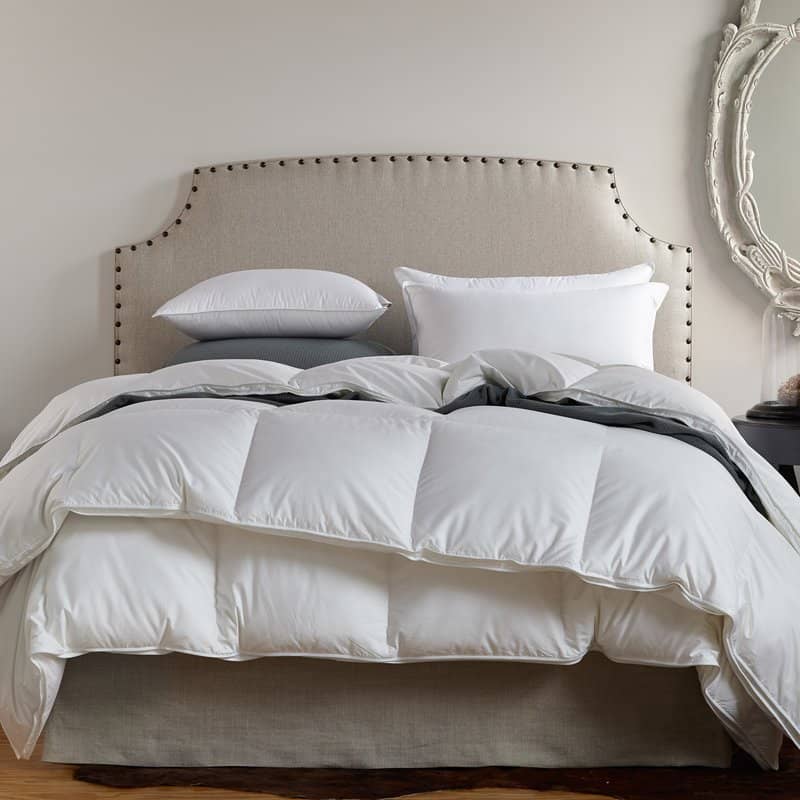 Down Inc. offers a fall weight (read: all season) duvet insert for those looking for a hypo-allergenic down duvet.

This duvet insert is a year-round weight with a 600-fill power. We love the addition of the 1” gusseted seams that allow the high-quality down to take advantage of the air around them and better regulate your temperature as you sleep. The box-stitching is also included to make sure the down stays exactly where it should.

Down Inc.’s duvet is machine washable, but the manufacturer recommends having it professionally laundered for full protection.

The final item on our list is different from all the others because it isn’t 100% down and the alternative isn’t a synthetic material but the natural fibers of a milkweed plant (syriaca). It’s the syriaca that makes this duvet hypo-allergenic because it suppresses the allergens found in down to prevent allergic reactions and provide a natural solution to allergies.

The Avalon Lightweight Down Comforter is also different because it is ultra-light weight, making it suitable for summers in warmer climates. But it’s still warm enough to be used during the rest of the year.

This duvet isn’t suitable for machine wash or dry cleaning. Rather, spot cleaning seems to be your only option.

However, it checks all the boxes by including a gorgeous cotton sateen shell, a goose down fill and a thread count of 300, so the extra effort is likely worth it.

Related: Duvet vs. Comforter vs. Blanket vs. Quilt vs. Coverlet