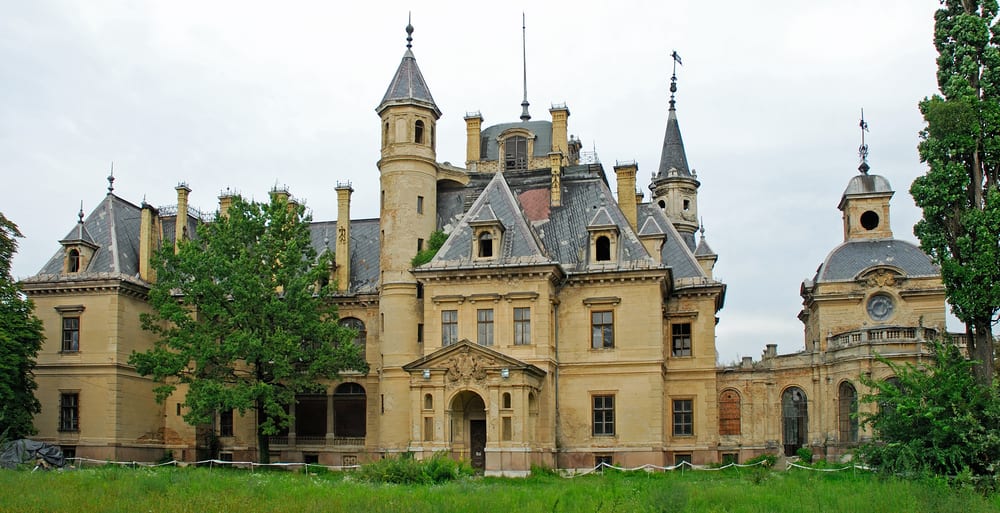 Many architectural primarypieces can be found in Hungary. We feature 25 of them in the form of historic castles, palaces, mansions and manor houses.

Scroll below and check out these photos which is a great way to figure out which ones you’d love to visit or if you simply like checking out photos of these great structures (like I do).

The Beidermann castle was the property of the Biedermann Baron family. It was built by Baron Rudolf von Biedermann commissioning architect Josef Baldauf following the Art Nouveau-style. The castle is now considered as a National Monument.

The Bojnice Castle is a medieval castle in Bojnice, Slovakia built in the 12th century. It was originally a wooden fort, but was replaced by stone gradually. The first owner, Matthew III Csák, received it from King Ladislaus V of Hungary. This was the start of the many changes in ownership, as it was owned by King Matthias Corvinus who gave it to his illegitimate son John Corvinus in the 15th century. After his death the castle became the property of the Zápolya family, then was acquired by the richest family in the northern Kingdom of Hungary, the Thurzó family who renovated the fortress into a Renaissance style castle. Before the Renaissance castle was finished, the property was transferred to the Pálffy family, who made another reconstruction under the direct order of Count János Ferenc Pálffy. Soon after, the Pálffy sold the castle and the surrounding land to Czech entrepreneur Jan Antonín Baťa, but after 1945, Bata’s property was confiscated by the Czechoslovak government and the castle became the seat of several state institutions. Today, The Bojnice Castle acts as a museum for the Kingdom of Hungary, Slovakia.

About the Bojnice Castle

The Bory Castle is one of two self-built castles in Hungary built by Hungarian sculptor and architect Jeno Bory between 1923 and 1959. Bory combined Gothic, Renaissance and Romanesque styles with the help of his students. While still under construction, Bory opened his castle to the public for the first time in 1934 and toured his guests by himself. Today, the Bory Castle serves as a private museum still owned by the Bory family.

About the Bory castle

The Brunszvik Mansion was built by Count Anthony Brunszvik replacing an 18th-century Baroque mansion after the Turkish wars. He built it on the deserted fields near Szekesfehervar following the Neo-gothic style. Soon after, the Brunszvik family would also create the first nursery school in Hungary in 1828. Today, the mansion serves as the headquarters of the Agricultural Research Institute of the Hungarian Academy of Sciences.

The Budapest Royal Palace suffered countless damages and rebuilding over the past centuries. It was first built by King Béla IV of Hungary between 1247 and 1265 and the successive owners of the castle maintained its magnificent Gothic appearance throughout the years, but constructed additional buildings in Renaissance, Baroque and Neoclassical styles. It is one of the most famous tourist attractions in Europe and is listed on the UNESCO World Heritage Site.

About the Budapest Royal Castle

The castle in Bükkösd is considered as the most beautiful privately-owned Baroque castle of Hungary. It was designed by Fischer von Erlach, Maria Theresa’s famous architect. It was believed that the castle was commissioned by Zsigmond Petrovszky in 1736 for his daughter and Krisztina Horváth and her husband, József Petrovszky. It is now privately owned and is open to the public for free.

This castle in Szentegát was the property of the Biedermann Baron family. It was built by Baron Rudolf von Biedermann commissioning architect Josef Baldauf following the Art Nouveau-style. The castle is now considered as a National Monument.

The Château de la Motte located in the commune of Joué-du-Plain in Normandy, France was originally a Viking Motte-and-bailey castle. The original castle was built between the 10th and 11th centuries, but the current chateau was built in the late 16th and early 18th century by the bourgeois Ango family. The Château de la Motte hosted countless lords and nobles and currently, it is owned privately by a Dutch businessman.

About the Château de la Motte

Esterháza is Hungary’s grandest Rococo edifice. It was built by Prince Nikolaus Esterházy in 1762, calling it the “Hungarian Versailles”. He commissioned architect Johann Ferdinand Mödlhammer, succeeded by Melchior Hefele 1765. When Nikolaus Esterházy died in 1790, no one from the Esterházy wanted to take the isolated palace. However, composer Joseph Haydn found that Eszterháza’s isolated location can lead to loneliness, a factor that can help him with his music, so in 1766 to 1790, Haydn lived in the estate.

Located in the town of Keszthely, Zala, Hungary, The Festetics Palace’s construction started in 1745 that lasted for more than a century. It was started by Kristóf Festetics followed by architect Viktor Rumpelmayer. Viktor Rumpelmayer died in 1885, but his work was succeeded by architects Gusztáv Haas and Miksa Paschkisch until the architecture was finished, giving birth to one of the three largest country houses in Hungary.

About the Festetics Palace

The Royal Palace of Gödöllő is one of the most important, largest monuments of Hungarian palace architecture. It is the favorite place of Queen Elisabeth of Hungary, which was built 1733 by Count Antal Grassalkovich, one of the most respectable noblemen in Hungary. The Hungarian state purchased the castle from the Habsburgs in 1867 and was given to Emperor Francis Joseph and Queen Elisabeth as a coronation present.

About the Gödöllő Palace

The Hoyos castle was built by Count Hoyos Miksa in 1910 using the Romantic style. The castle is currently owned by a private owner who is an entrepreneur and is not open to the public. The owner is currently looking for a buyer of the castle.

About the Hoyos castle

Located in the town of Hatvan, The Grassalkovich Mansion was built by József Jung and Ignac Oratchekin for Count Anton Grassalkovich and his family, who were one of the wealthiest families of the Habsburg Empire. However, the mansion was later owned by the Hatvany-Deutsch family, who added the neo-baroque style that can be seen in the stairway. During the WW2, the mansion was partly destroyed and was later on reconstructed. Later on, it became the home of the Grassalkovich House of Culture in the mid-1980s.

Located in Carei, the Károlyi Castle is named after its first known residence the Károlyi noble family. It is believed that the castle was built between the late 15th century and the early 16th century as a defensive fortress joining Carei’s defensive system against the invading Turks in the 17th century. In 1732-1791, Károlyi Antal adviced the family to turn the castle back into a residential property once again but eventually died before his advice turns to reality. The old fort was then demolished and was replaced by a baroque castle. The Károlyi family left the castle in 1907, the estate was then acquired by the Municipality of Carei, turning it into a Historical Museum.

About the Károlyi Castle

Located in the town of Lillafüred, the Lillafüred palace was built in 1927-1930 following the Neo-Renaissance style designed by Kálmán Lux. The palace serves as an elegant hotel with a restaurant inside, named after King Matthias.

The Margitligeti kastély was originally built as a sanatorium in 1897-98 by Dr. Martin Sándor. In 1917 the castle served as a military house, where the service was provided by the missionary sisters of the Catholic Church. Since 1950, the Margitligeti kastély’s purpose is to be the home of the Institute for Special Needs Education until recently when it was acquired by the Missionary Sisters, opening it for the pilgrims.

Located in Acsaujlak, Hungary, the Acsaujlak Castle was built between 1907 and 1910 by Baron Prónay Dezső. He commissioned it for his daughter Iphigene. During the mid 20th century, the castle became one of the first Hungarian castle hotels but stopped being so after it was purchased by a private owner. Currently, it is a private property, however, the owner lets visitors tour the house with a tour guide provided by the castle. It can also be rented for weddings and other events.

The Schossberger Castle was probably originally built in the 12th century as the main house of the Board noble families. The estate was purchased by Baron Sigmund Schossberger in 1883 and used it as his summer residence. Redesigned by famous architect Miklós Ybl, he followed the French Neo-Renaissance style architecture. During the Second World War, the castle was occupied by the German troops and used it as their headquarters. Later on, it was captured by the Soviets and used it as their headquarters as well. Years after the war, the castle was abandoned and the town of Tura declared it as a national monument that is open to the public. Years had passed and still many people believed that the castle is haunted. Many people believed that it was the inspiration for Cinderella’s mansion in Disney’s story.

The Simontornya Castle was built in the 13th century by the 7th Hungarian King, Solomon. Almost all owners who owned the castle made renovations and improvements on the castle. During the 1720’s, it was donated to the Styrum-Limburg family. Today, it is currently a Museum maintained by the Kingdom of Hungary.

About the Simontornya Castle

Situated atop a mountain called “Castle Hill” in the town of Sümeg, the Sümeg Castle was built in the mid or late 13th century by Béla IV of Hungary. The castle served as his residence during the Mongolian invasion between 1241-1242. Later on, Stephen V of Hungary presented it as a gift to the Roman Catholic Archdiocese of Veszprém. Today, the castle is privately owned but is a very beautiful tourist attraction and is considered to be Hungary’s most well-preserved fortress.

About the Sümeg Castle

Built in the mid-14th century, the Tata Castle is one of the jewels of Tata, Hungary. It was the favorite summer resort and residence of the King Sigismund of Luxembourg. Mátyás Hunyadi followed King Sigismund’s ownership to the castle and became his favorite residence as well. Tata Castle was burnt by Habsburgs later on and was renovated and modified to the fullest by the next owner, the Esterházy family.

About the Tata Castle

The Teleki-Dégenfeld mansion in Szirák, Hungary was built in 1748 and is considered as one of the most beautiful baroque mansions in Hungary. Serving as a four-star hotel the estate has been one of the gems of the international holiday resort chain, Forever Resorts, which is present in several countries around the world, since 2002.

The Vajdahunyad Castle was built in 1896 following the design by Ignác Alpár. Designed mixing the prominent architectures such as Romanesque, Gothic, Renaissance, and Baroque, the Vajdahunyad Castle was constructed for the millennial celebrations of 1896 with the goal of embodying 1,000 years of Hungarian architecture. Today, it houses the biggest agricultural museum in Europe, the Museum of Hungarian Agriculture.

About the Vajdahunyad Castle

The Vaszary villa was originally built in 1892 by the Vaszary family. It was beautifully restored in 2010 and turned it into the crown jewel of the cultural quarter of Balatonfüred. It is now a museum showcasing some of the wonderful collection of arts and crafts of the best-known family member, the painter János Vaszary.

About the Vaszary Villa