Portugal has so much history which includes amazing historical architecture in the form of castles and palaces. Check these amazing examples out - must-visit buildings when you're there. 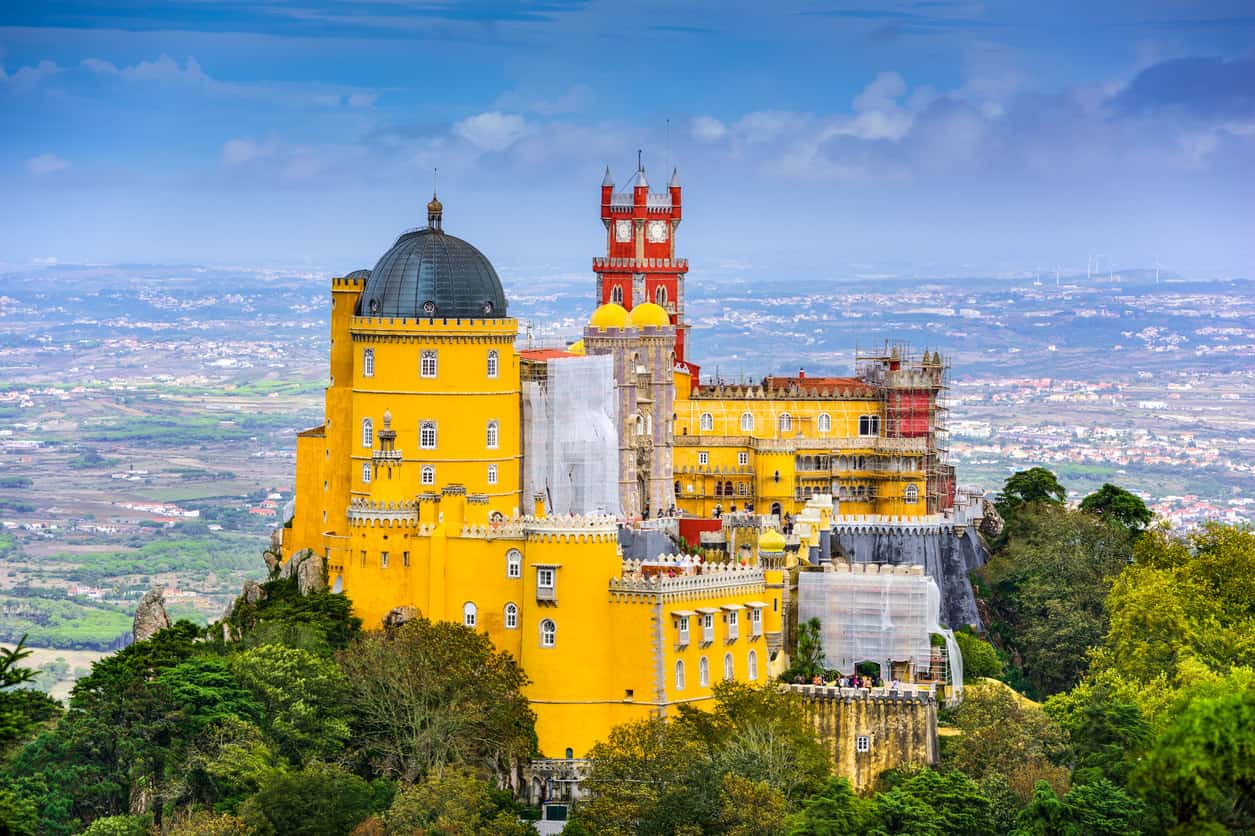 Welcome to our castles in Portugal. While Portugal doesn’t have as many famous castles and palaces as other European countries, the ones it has are incredible.

If you’re planning a trip to Portugal or are there right now, here is a list of the best ones to check out. I love how color is incorporated into some of them. 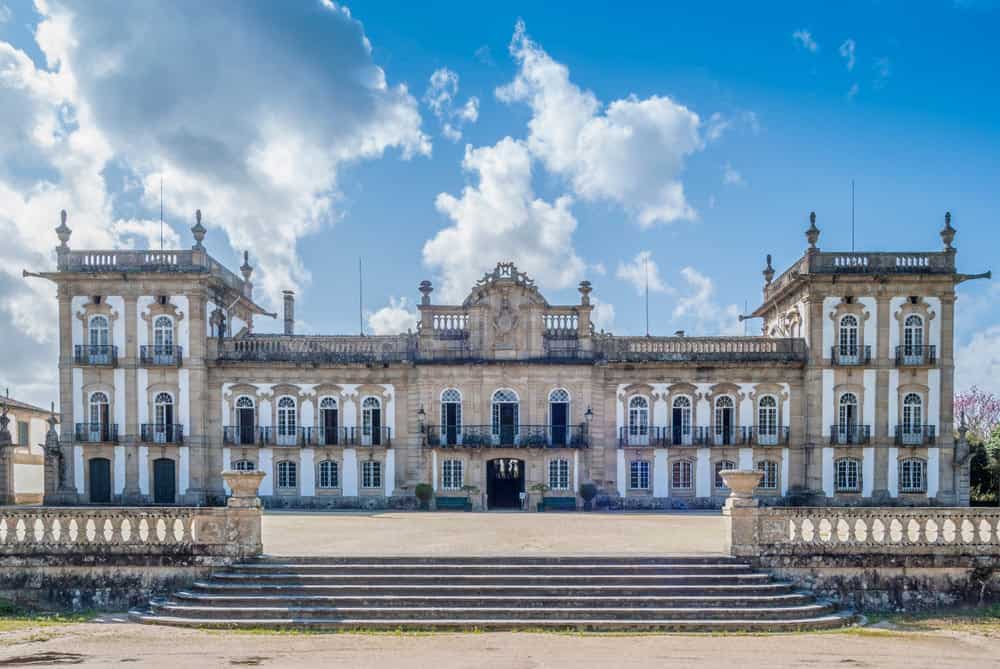 The Brejoeira Palace located in Monção, Portugal is a Neoclassical palace in the 18th century by architect Carlos Amarante. It was classified as National Monument in 1919 and is open to the public. 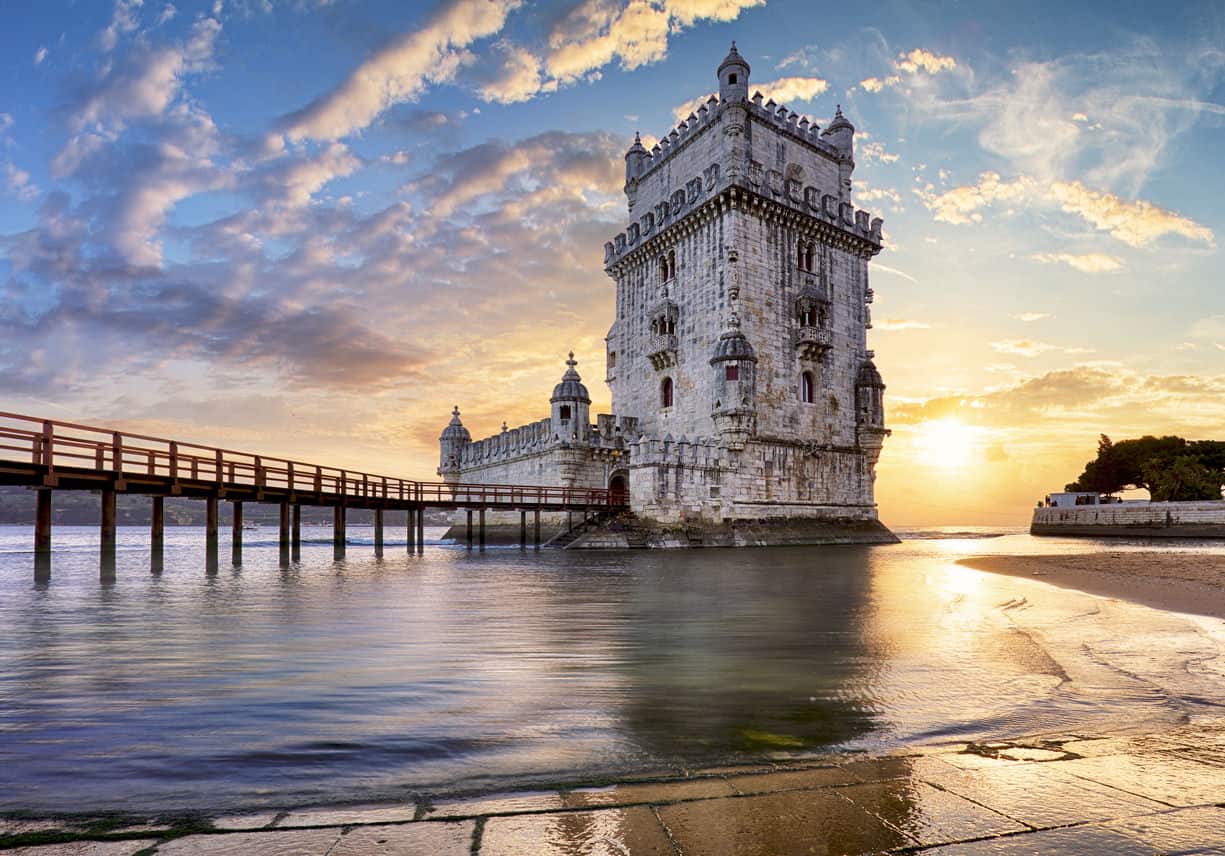 The Belém Tower located in Lisbon, Portugal is a defense fortress set to guard the Tagus River. It was built in the early 16th century during the height of the Portuguese Renaissance by King Manuel I of Portugal, following the late King John II’s advice of building a reinforcement fortification along the entrance of the Tagus River. The tower was designed in the Portuguese Manueline style and was classified by UNESCO as a World Heritage Site.

About the Belem Tower – Tagus River

Bussaco Palace near Luso in Portugal

The Buçaco Palace is a luxury hotel in 1888 by King Charles I of Portugal. Located in the mountain range of Serra do Buçaco, this palace followed the Manueline-Gothic architectural style and was transformed into one of the most beautiful and historic hotels in the world.

The Castle of Almourol is a medieval castle set atop the islet of Almourol in the middle of the Tagus River, located in the civil parish of Praia do Ribatejo. It is regarded as Portugal’s most beautiful castle and is believed to be founded on the site of an old castle built in the 1st century. The Castle of Almourol was part of the defensive line controlled by the Templar Knights but was abandoned when the Templar Knights disbanded. It was rebuilt during the 19th century, then was converted as the official residence of the Portuguese Republic in the 20th century.

About the Castle of Almourol

Located in the civil parish of Santa Maria, São Pedro e Sobral da Lagoa, in the municipality of Óbidos, The Castle of Óbidos is a well-preserved medieval castle built by Queen Catherine of Austria, wife of King John III in mixed elements of Romanesque, Gothic, Baroque and Manueline architectural styles. It was built in the 13th century that guarded the whole region for over 800 years.

About the Castle of Óbidos

A monumental Baroque and Italianized Neoclassical palace-monastery located in Mafra, Portugal, the Palace of Mafra was built during the reign of King John V and were usually a secondary residence for the royal family. Designed by the German architect João Frederico Ludovice, the palace was declared a national monument in 1907 and was also one of the finalists of the Seven Wonders of Portugal.

About the Mafra National Palace 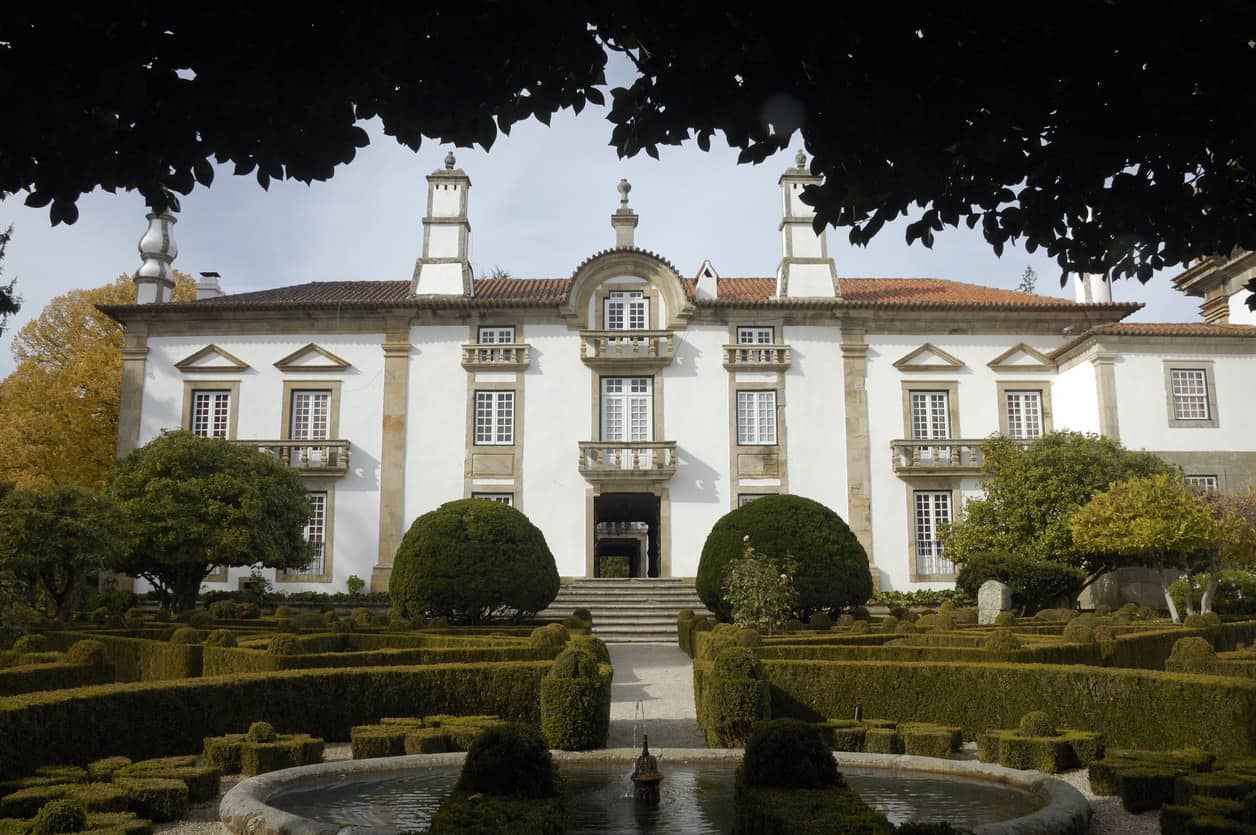 Back side of Mateus Palace. 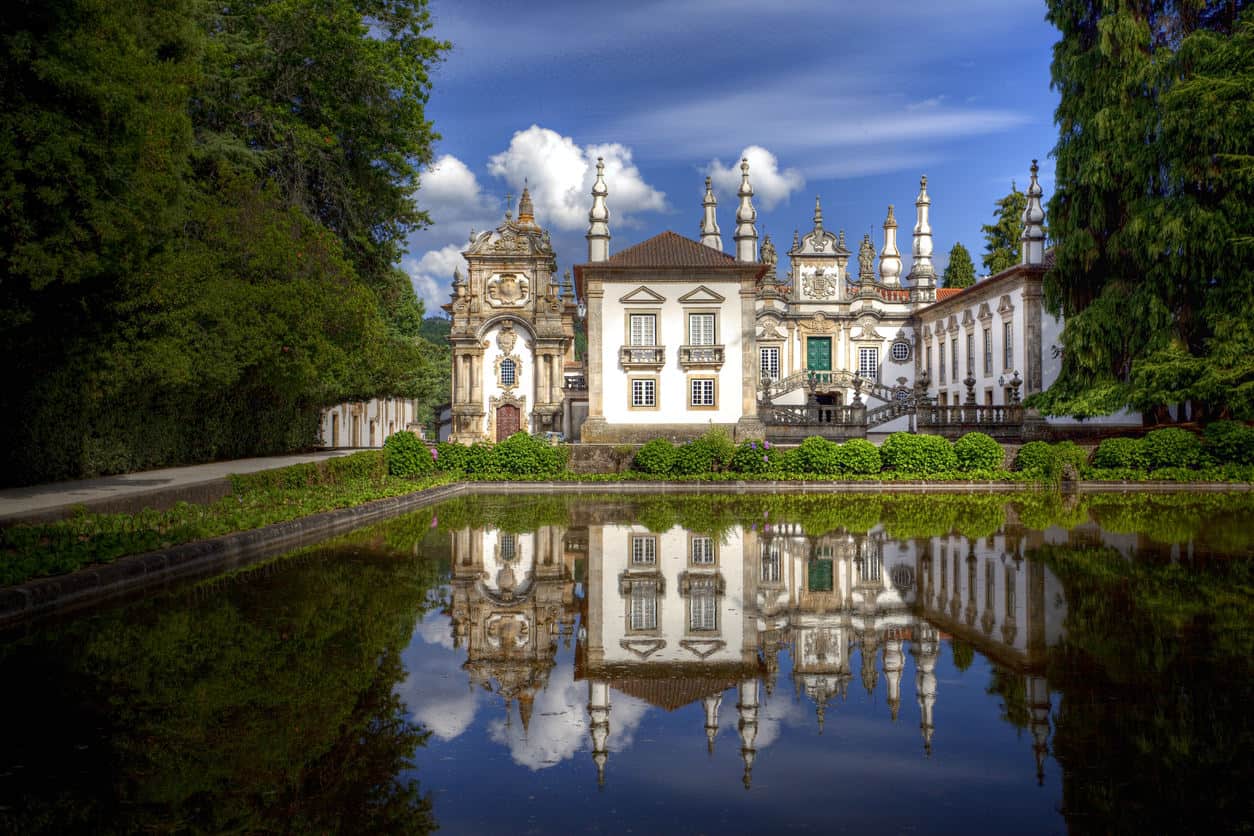 Located in the civil parish of Mateus, municipality of Vila Real, The Mateus Palace was built in the first half of the 18th century with architect Nicolau Nasoni being greatly involved with its construction. The palace is currently owned by the Mateus Foundation opening the palace to a great number of cultural activities.

About the Mateus Palace

Palace of the Dukes of Braganza

Palace of the dukes of Braganca, built in the 15th century, in Guimaraes, city north of Portugal 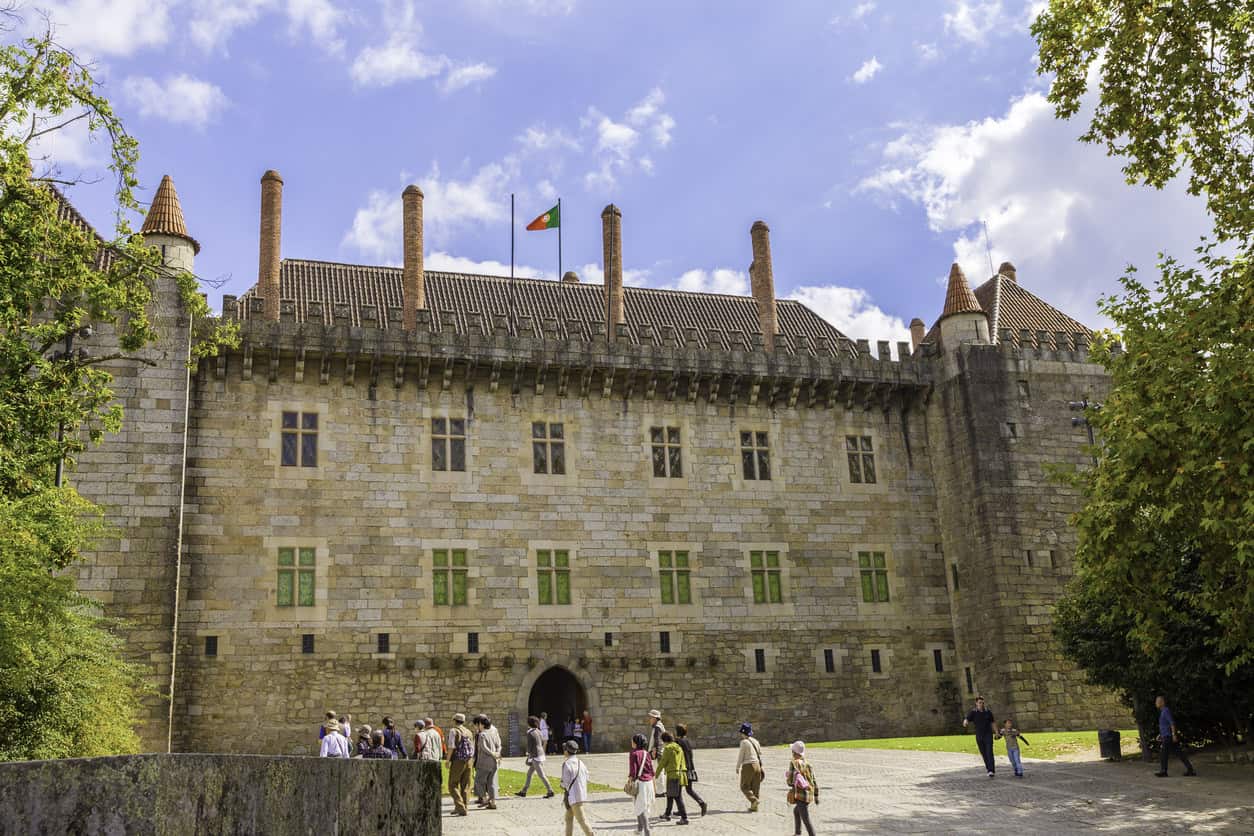 Palace of the Dukes of Braganza built in 1420

About the Palace of the Dukes of Braganca 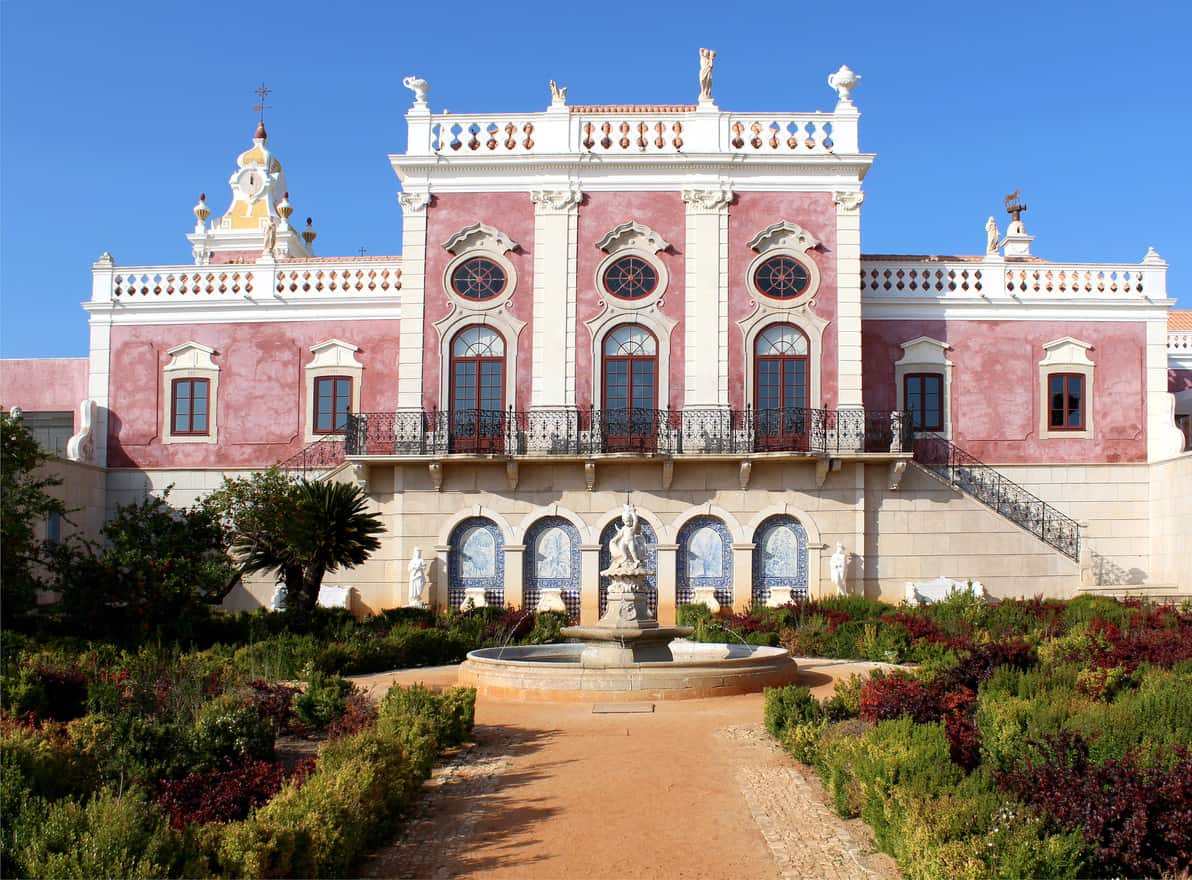 The Palace of Estoi is famous for its neo-Baroque and neo-Rococo features. Built in the 18th century, the palace was the residency of Francisco José Carvalhal e Vasconcelos, a member of the royal court. The palace was passed on to several generations and remained in the family’s ownership until 1987 when the City Council of Faro purchased it.

About the Palace of Estoi 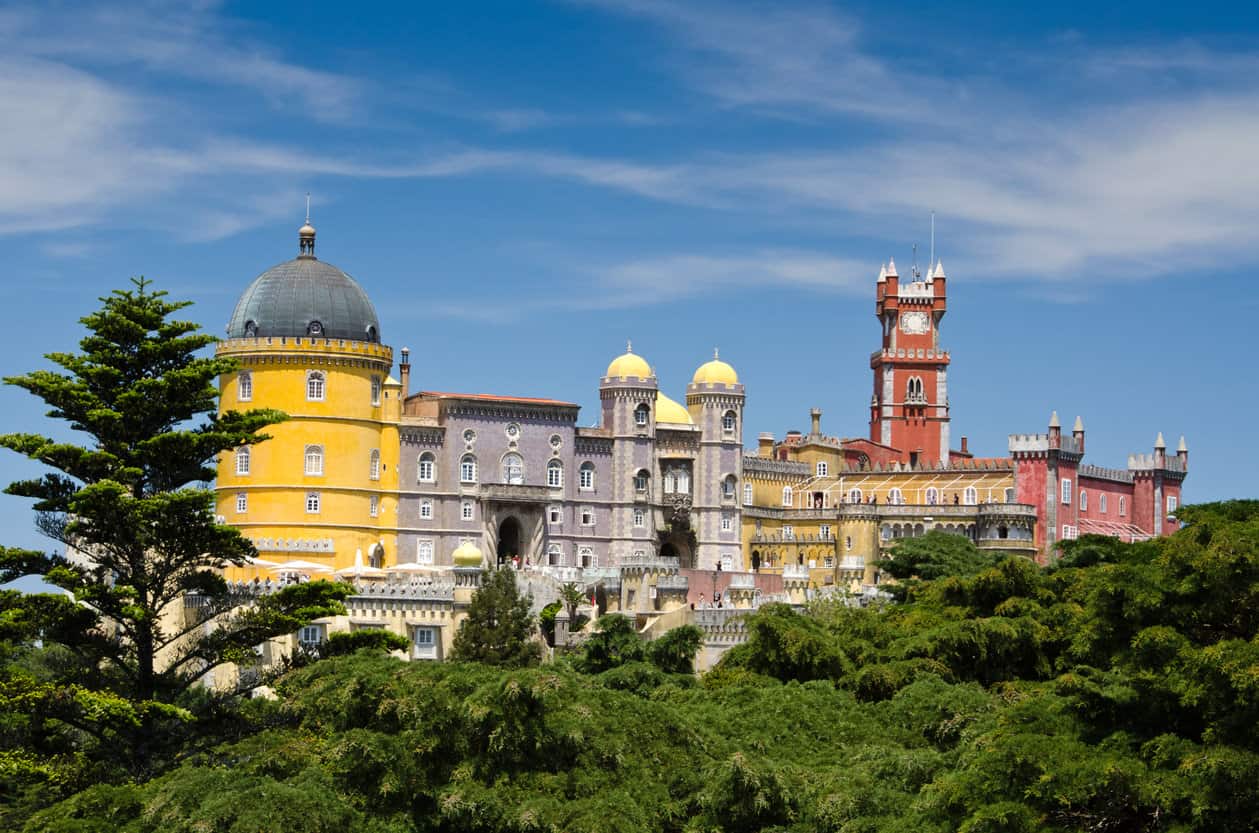 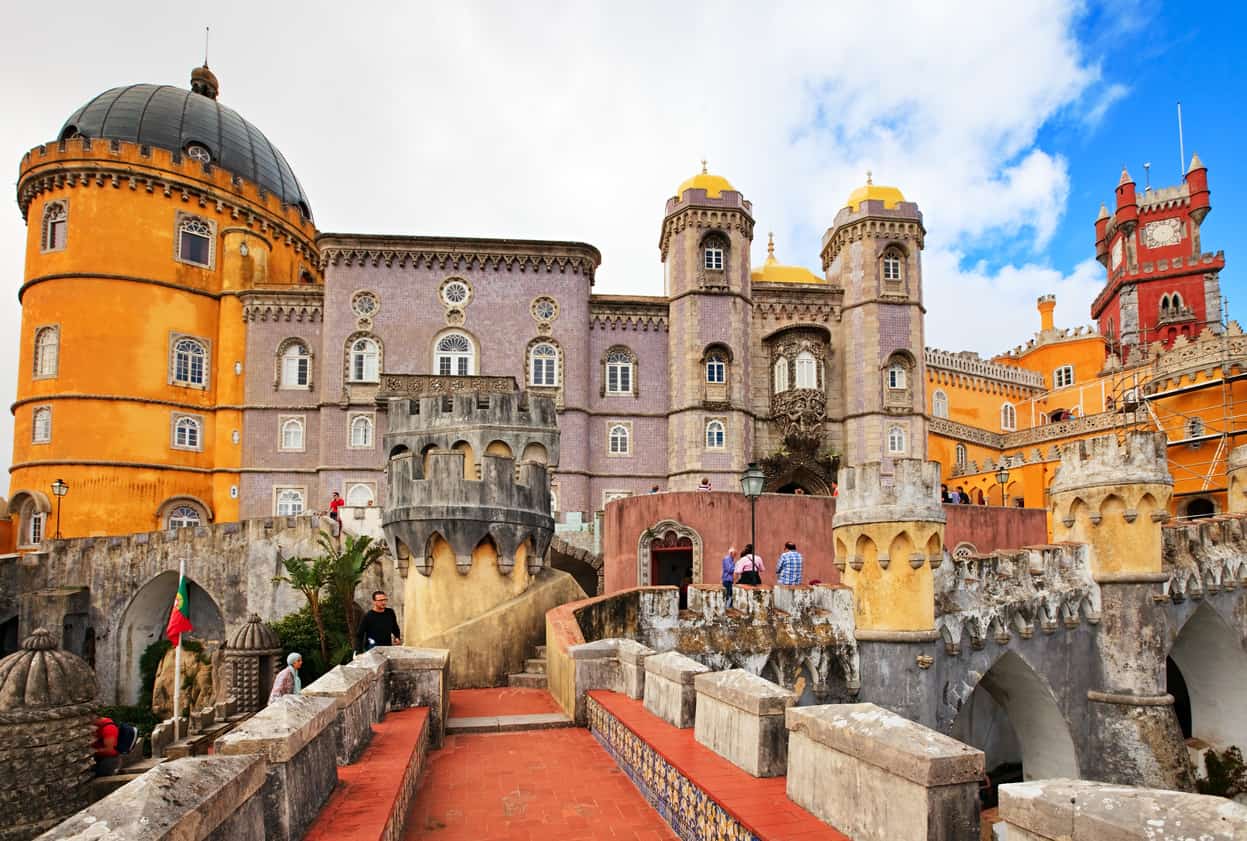 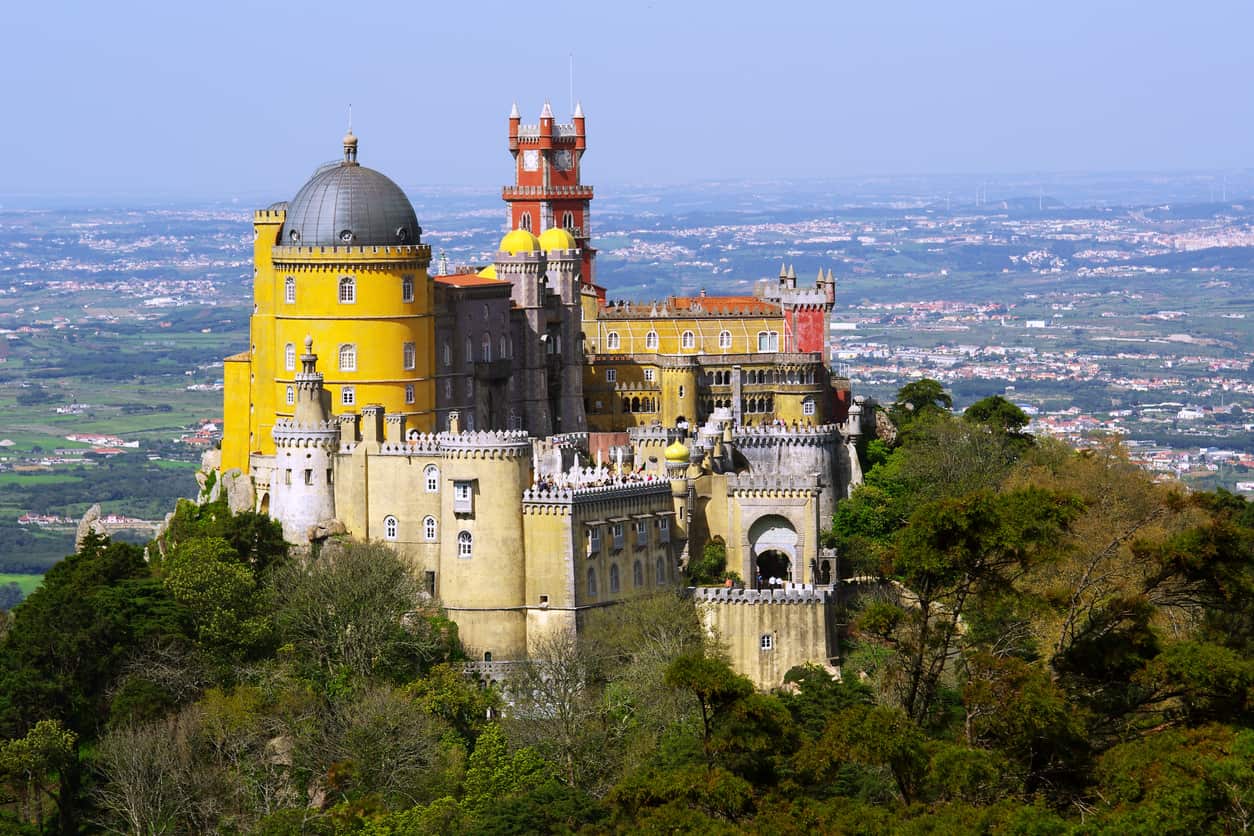 Located in the municipality of Sintra, on the Portuguese Riviera, the Pena Palace is a Romanticist castle that was completed in the 18th century. It boasts an intentional mixture of eclectic styles including the Neo-Gothic, Neo-Manueline, Neo-Islamic and Neo-Renaissance making it so beautiful it was classified as a World Heritage Site by UNESCO. It is also serving for state occasions hosted by the President of the Portuguese Republic and other government officials.

About the Pena Palace 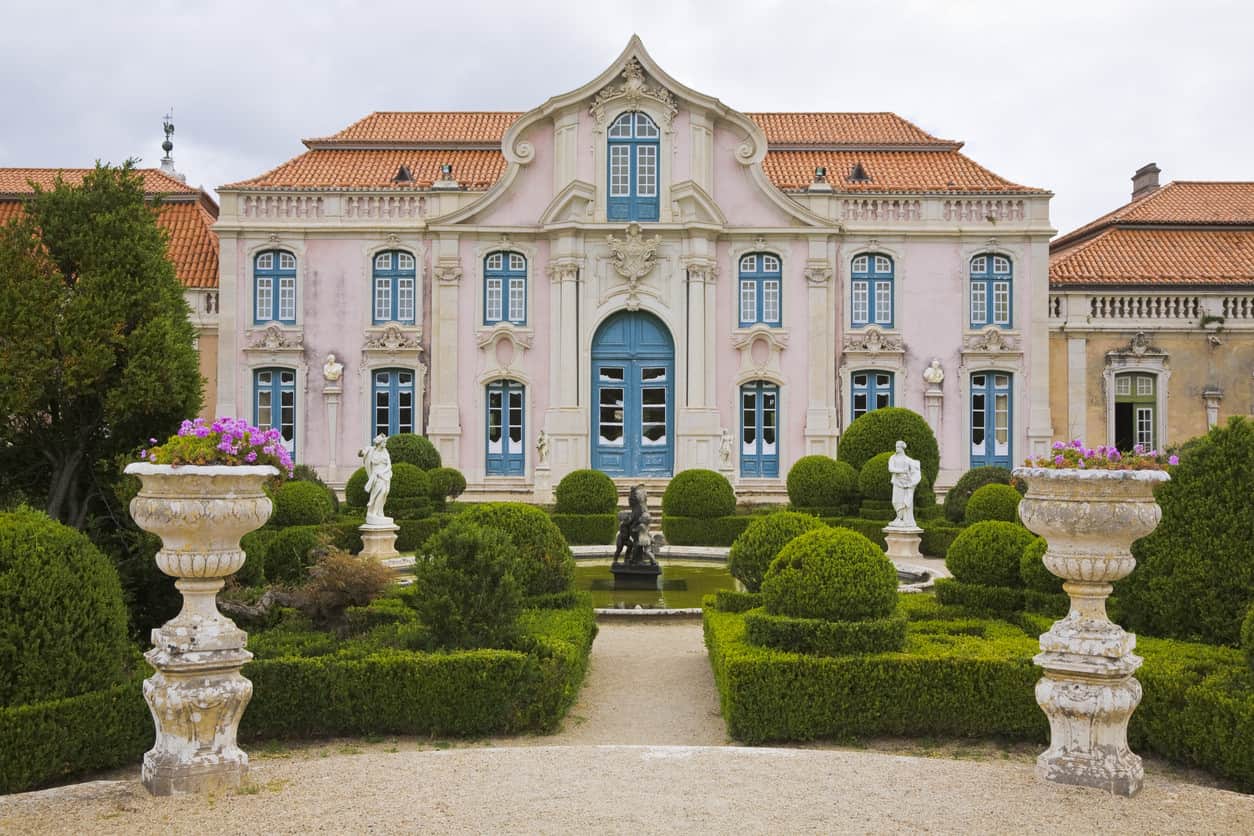 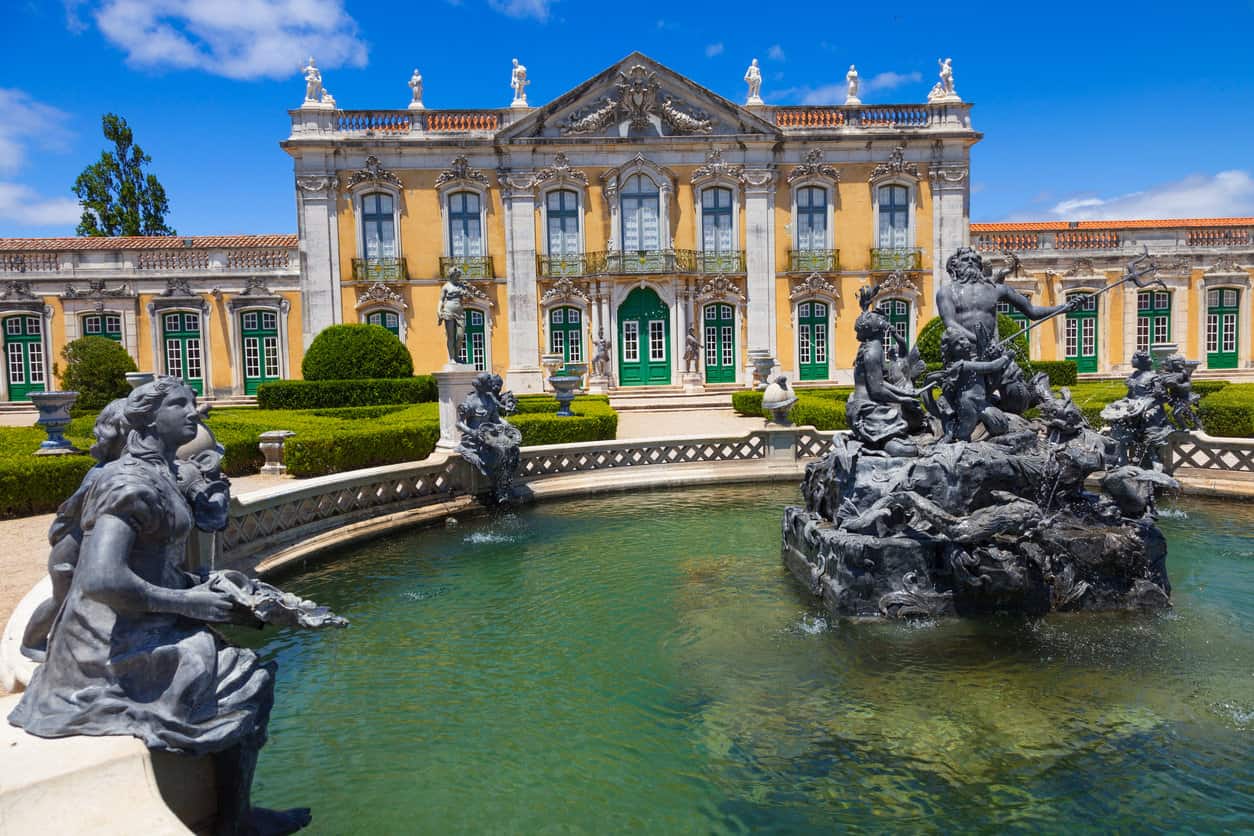 The Palace of Queluz was the manor house of Dom Pedro of Braganza, later to become husband and then king consort to his own niece, Queen Maria I. It was built in the 17th century and became the official residence of the Portuguese prince regent John VI, and his family. This Portuguese 18th-century palace located at Queluz is now a guest house allocated to foreign heads of state visiting Portugal.

About the Queluz National Palace 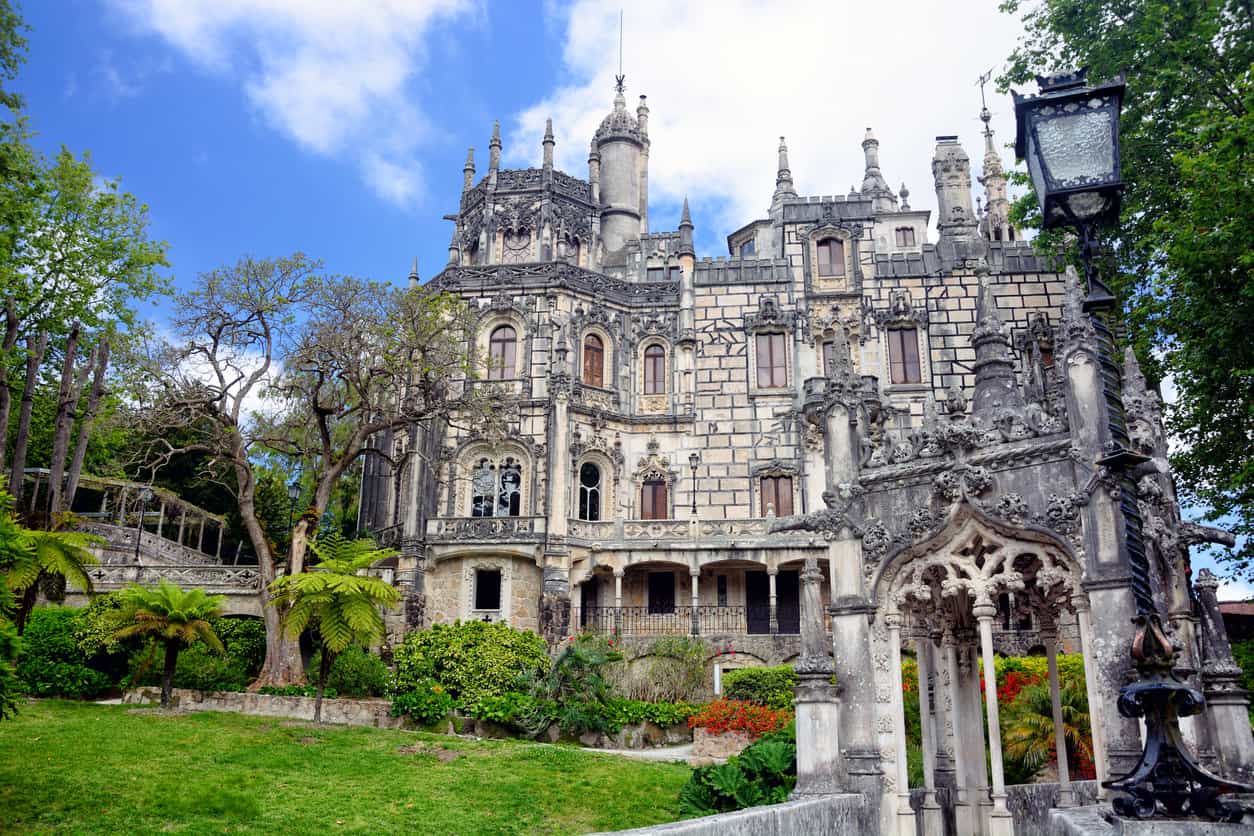 Located near the historic center of Sintra, Quinta da Regaleira is classified as a UNESCO World Heritage Site and is one of the principal tourist attractions of Sintra. Its history dates back thousands of years extending all the way through to the Iron Age, when the Romans started their conquest of the region but was later on defeated by the Moors in the 2nd century. The area was acquired by the first king of Portugal after the conquest of Lisbon in 1147, then constructed a royal palace as a summer residence until the late 16th century. The royal palace was succeeded by known royalties but it was not until 1904, after being sold to António Augusto Carvalho Monteiro, that the estate was transformed into a unique palace that is known up to the present.

About the Quinta da Regaleira 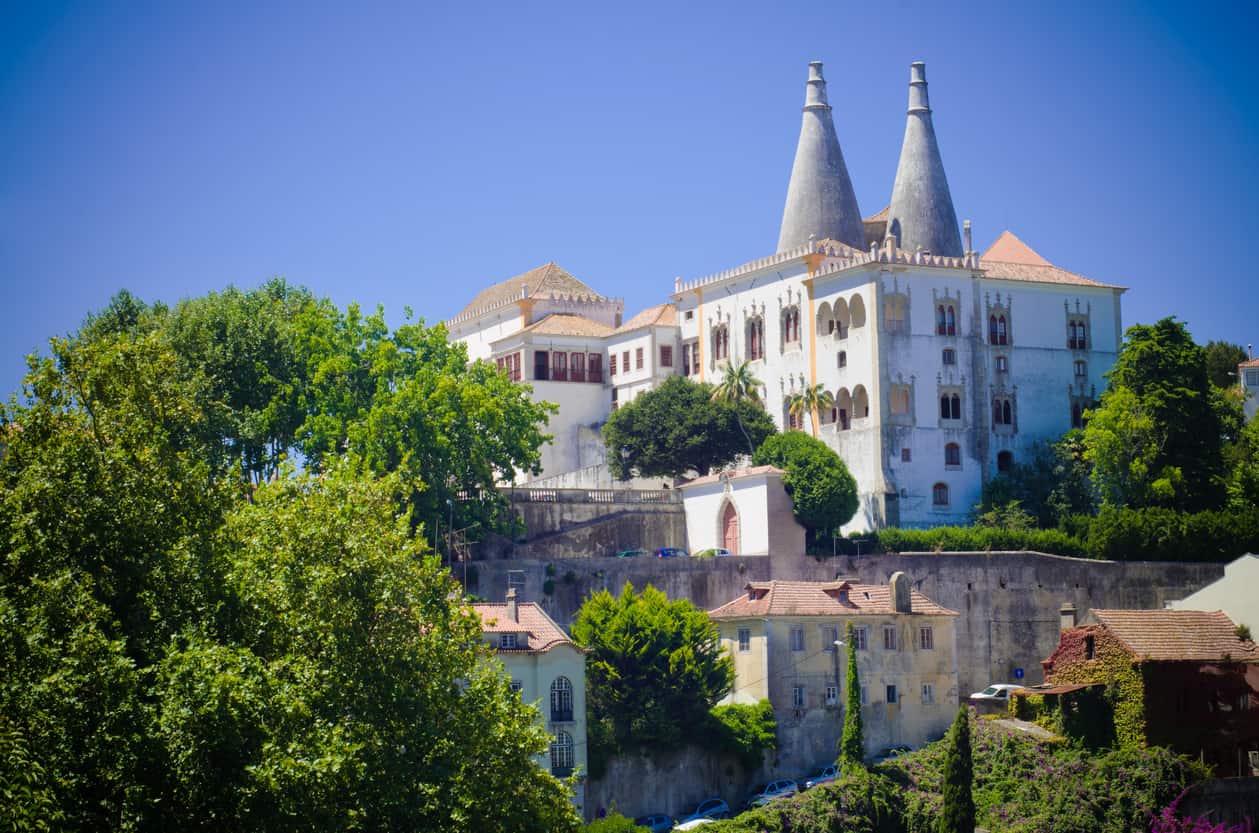 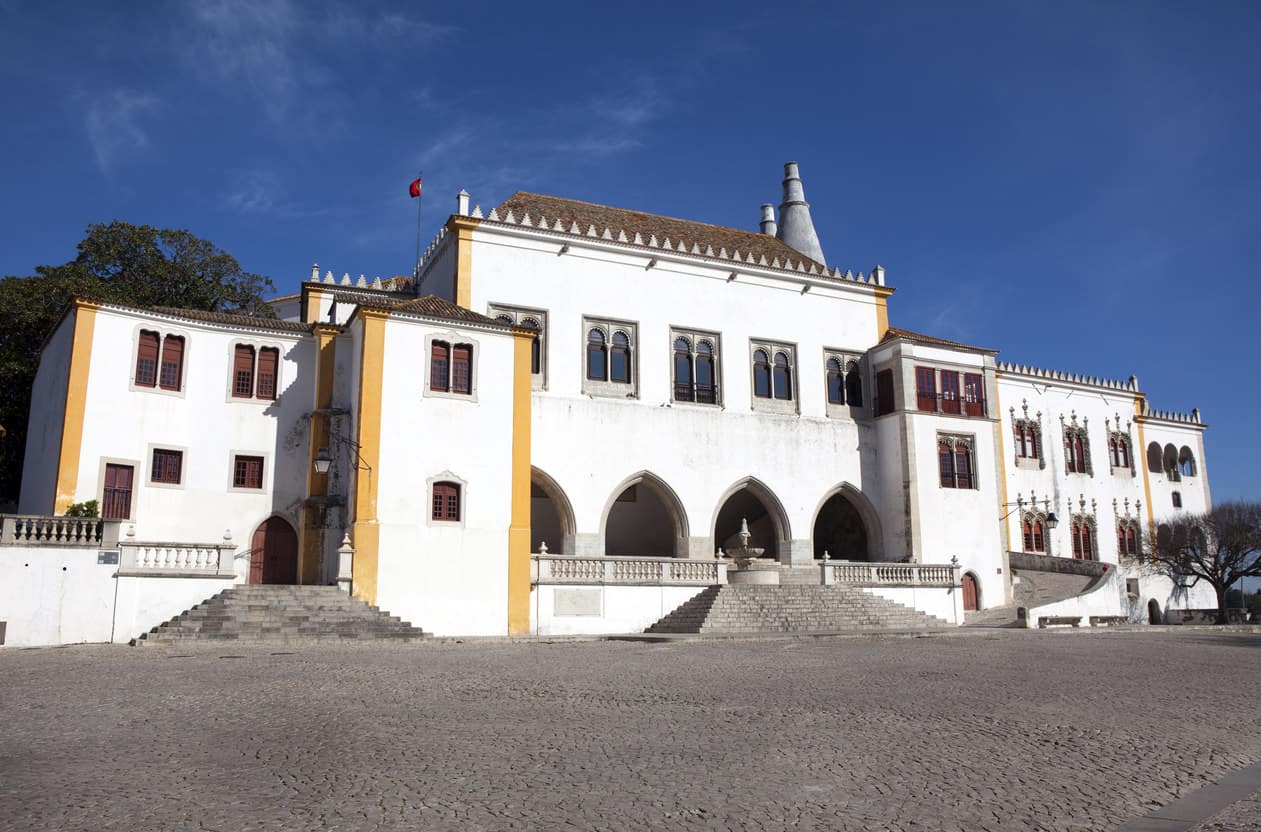 The Palace of Sintra located in the town of Sintra, in the Lisbon District of Portugal is a present-day historic house museum built on top of a Moorish palace built in the 11th century. It was constructed in the 15th century to serve as the residence of the royal family. Currently, It is the best-preserved medieval royal residence in Portugal and is part of the UNESCO World Heritage site.

About the Sintra National Palace