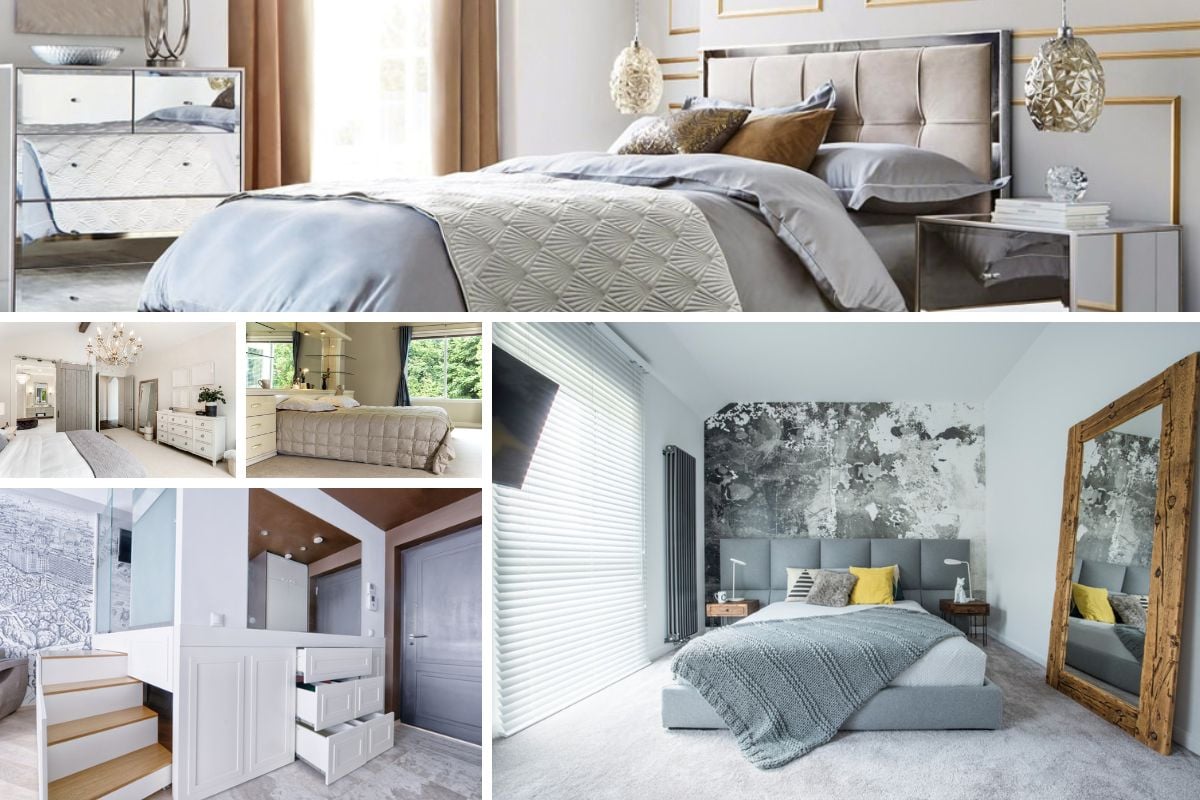 There was a time when the phrase “meet you at our house” meant a nice conversation and maybe a cup of coffee in the living room, the family room, or even the outside patio. Nowadays, however, things have changed from the way they were. Not only this, but the trend toward kitchens that are more like social centers is becoming more and more popular as time goes by. 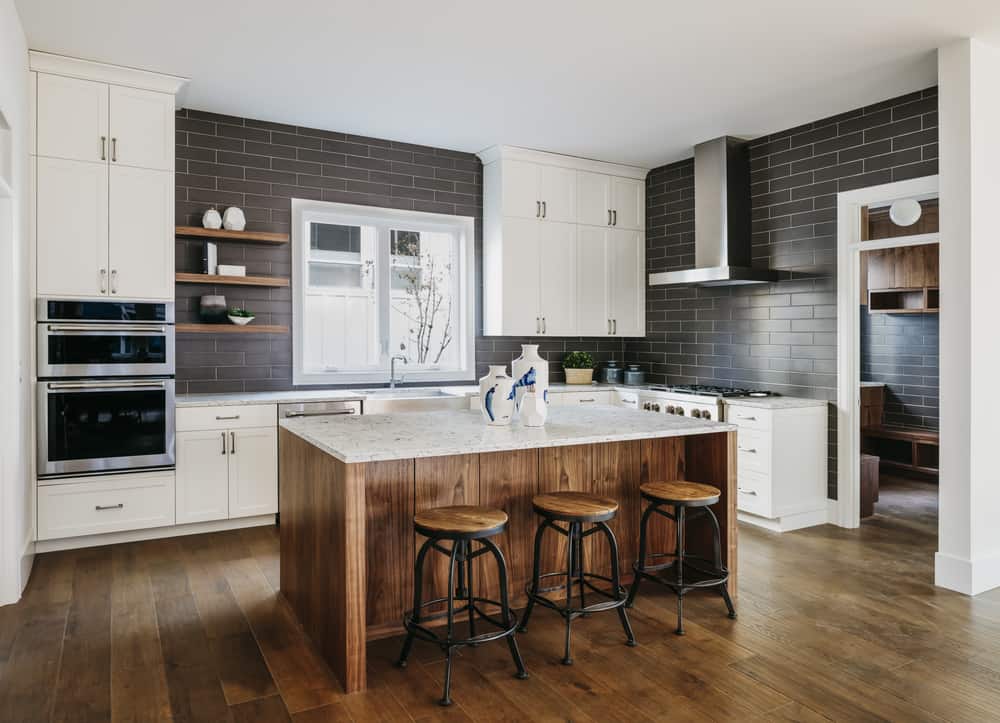 For a growing number of reasons, the most used room for socialization in the average American home is increasingly becoming the kitchen. Here are some parameters and reasons for this shift in kitchen sizes from small kitchens to massive ones, which we’ll discuss below.

Table of Contents Show
The Average Size of Today’s Kitchen
A Brief History of Kitchens and Kitchen Sizes
Kitchen Size Today
Numbers, Please!
Types of Kitchens and Their Sizes
One Wall Kitchen
Galley Kitchen
L Shaped Kitchen
U Shaped Kitchen
Peninsula Kitchen
Island Kitchen
Frequently Asked Questions about Average Kitchen Size in the US
What is the average size of a kitchen in a home in the United States?
How much does the average kitchen remodel cost (based on its square footage)?
What are the different kitchen layouts?
Parting Words on Average Kitchen Size in the US

The Average Size of Today’s Kitchen 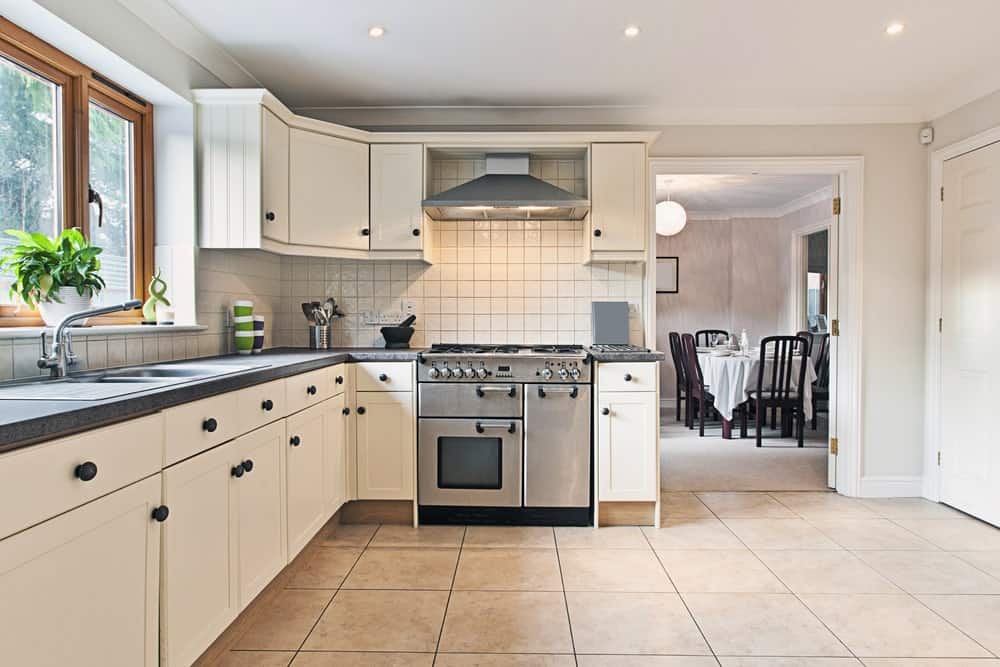 Today’s modern kitchen can come in a wide variety of different sizes, designs, and sizes. It doesn’t matter whether the cook (or anyone else) wants a kitchen that is a total remodel or an entirely new room, the kitchen is more and more taking the center stage of the traditional American home.

Whether you are planning a simple upgrade or expanding your kitchen’s size, the usual first step is to do your research on what is available as well as what is possible. It’s important to understand that, thanks to technology and revolutions in design, practically anything is possible.

That said, you have to begin with acquiring the knowledge of what you can and cannot do in your space when it comes to a kitchen remodel or update. That is the purpose of this article, and we’ll begin with the average kitchen size, expressed in square footage.

To begin, let’s take a look at what the average kitchen size in the United States actually is, what impact this has on overall home design, and why these considerations should and do exist at all.

A Brief History of Kitchens and Kitchen Sizes 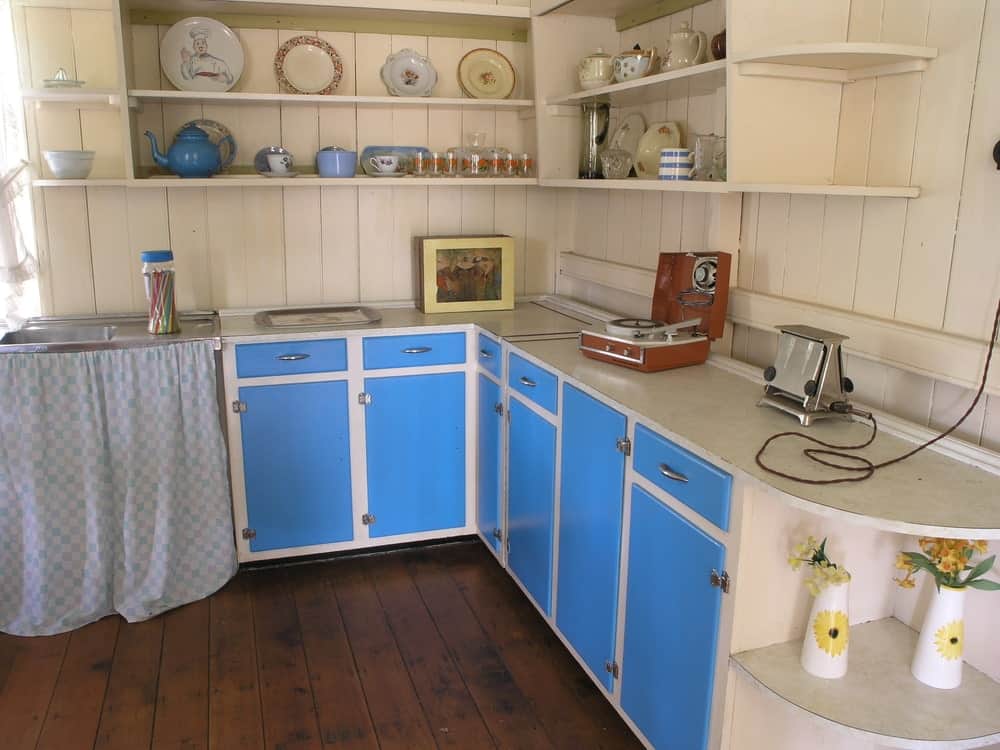 Just to see from where the kitchen originated, try to remember what this room looked like in the homes of yesteryear. If we rewind the years back far enough, chances are good that there was no designated room called the “kitchen” in the home. The lack of a separate kitchen was due to the frequency of cooking fires. Because of this, there was usually no designated kitchen, only an area where the foods were prepared.

If a separate kitchen room existed in any form in the past, these rooms were open, since the cooking area often served also as a heating source for a home. As time went on and heating methods become more sophisticated so that individual rooms evolved with their own heating sources, this allowed for the kitchen to take up its own separate room.

Once this became common, the kitchen was usually very small compared to the modern standard kitchen size. This was due to the fact that, overall, the majority of homes were smaller than what the average home size is today. 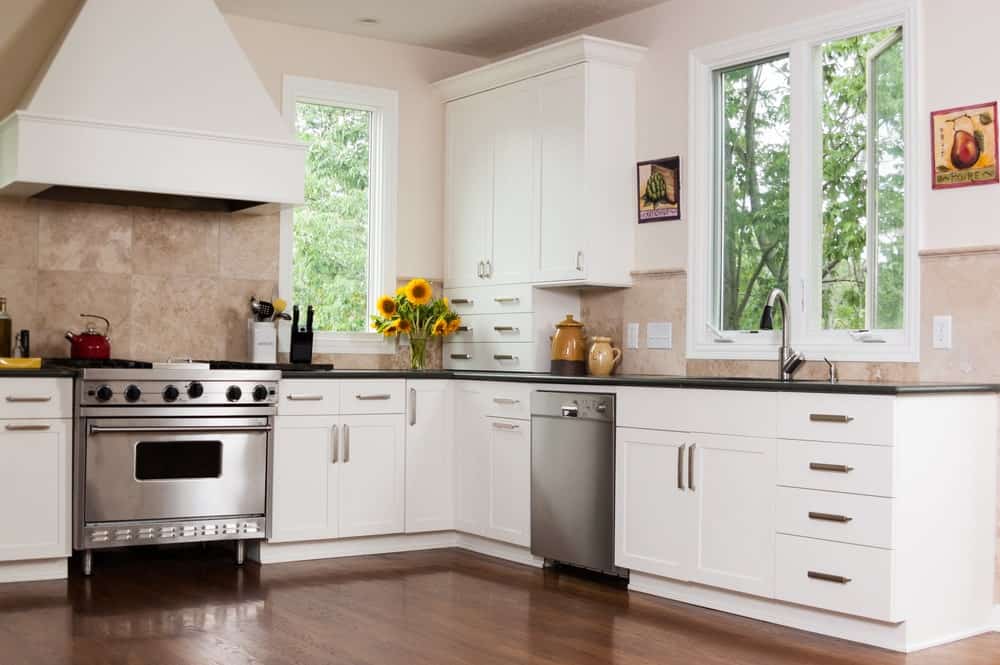 As we can see, room sizes have changed over the past few centuries. For a variety of reasons, kitchens, as well as every other room in a home, have only grown in size. Home design options have been a huge factor in the increase in kitchen sizes. This increase is evident in the difference between homes built in the 19th century and the late 20th century, for example.

Next, one must consider what the term “average” indicates. Simply stated, today’s “average” is much different from what we would have considered “average” only a decade ago. Lastly, it is important to consider how the home building and construction industry has changed over the past number of years when describing the term average. 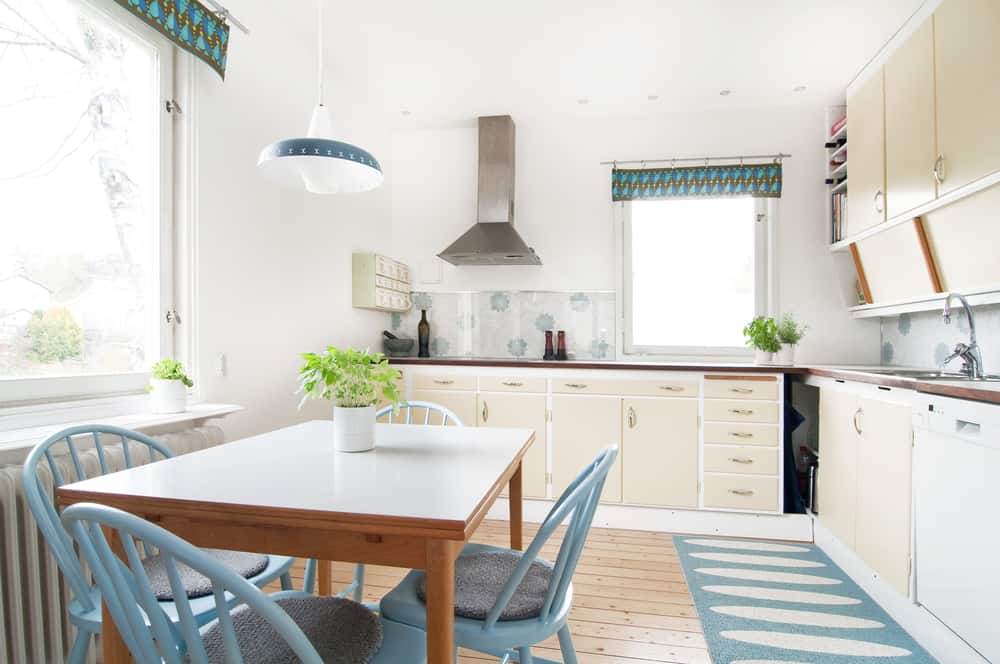 The sizes of all the rooms in a home, which includes the kitchen, is much larger than it was in years past. In terms of square footage alone, the size of the average American kitchen has increased dramatically in the past few years. Kitchens in years past were built to be considerably smaller than today’s kitchens are.

In fact, older kitchens averaged in size at approximately 80 square feet. This change in kitchen size can be attributed to a number of factors, including the style and methods of entertaining, the societal culture, overall home size, and other such factors.

In years past, the kitchen was a room that was used almost exclusively for food preparation and clean up only. Today, however, the kitchen is used not only by the person preparing the main meals for the inhabitants of a home, but also by whoever might want to make their own meal during the day, prepare a snack, or even socialize with friends, guests, and neighbors.

Simply put, people like to socialize in the kitchen. In fact, people today are just as likely to carry on social activities in the kitchen as much as they might have been in the living room or family room in years past.

The changing social role of the kitchen is an important part of the difference in kitchen sizes over the past few years. Today, people “hang out” in the kitchen. Some kitchens have even been outfitted with radios and televisions, to assist with socialization and comfort.

Other kitchens have been equipped with these appliances, placed so that they are fitted underneath cabinets and other fixtures to prevent them from being in the way of other kitchen functions.

Other technological needs have also necessitated a larger kitchen. However, one must also take into account what constitutes a “necessity.” Is a kitchen island, or additional kitchen sinks, or full-sized freezers in addition to the ones included with refrigerators, among other upgrades, truly “necessary” in an average kitchen?

That said, larger homes have more room for larger kitchens. So, what is an average size kitchen? What is the average kitchen’s size by square foot? 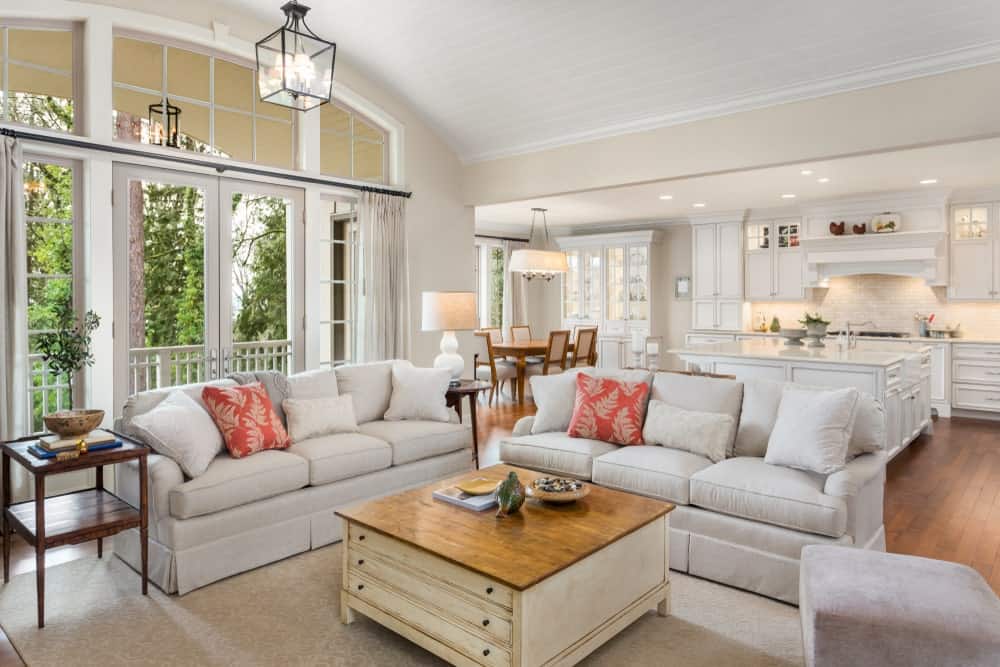 Trying to pin down exactly what the size of an average kitchen is is somewhat akin to explaining the shape of water. That is, the average kitchen size is whatever one wants it to be.

Whereas in years past kitchens were usually given a designated amount of space, nowadays tuning into any home and garden or real estate show will illuminate the fact that more and more often, the kitchen is the center of a home. Today’s kitchens can have a footprint of any square footage. This is especially true in larger and new homes.

The numbers below reflect a broad spectrum of opinions about average kitchen size from several different architects and designers.

Types of Kitchens and Their Sizes

There are many different types of kitchen layouts, and these various kitchen designs vary greatly in size. The ones we’ll discuss here are the one-wall kitchen, the galley kitchen, the U-shaped or horseshoe kitchen, the L shaped kitchen, and the island and peninsula kitchen. 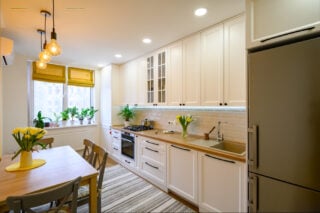 A one wall kitchen is an excellent option for those with small homes or limited kitchen space. In a one wall kitchen, all the kitchen cabinets and appliances are located on one wall. Some more modern kitchen designs include an island, as well. One wall kitchens typically require 8 feet in length to accommodate the necessary kitchen appliances. 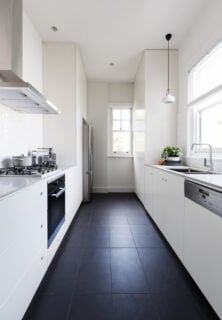 A galley kitchen, also known as the walk-through kitchen, is another great option for those with small kitchen spaces. In a galley kitchen, two parallel walls of kitchen cabinets and worktop spaces face one another, creating a walkway between them.

The creation of a galley kitchen also omits the problem of corner cabinets, which can be a costly addition, as these must often be custom cabinets. The average galley kitchen width is seven to 12 feet, with four or five feet between the two walls of kitchen cabinets and appliances. 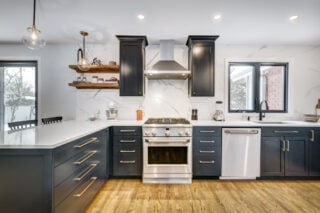 An L shaped kitchen consists of two perpendicular walls of kitchen appliances and cabinets. These walls can be whatever length is desired or possible. This kitchen layout can be quite appealing because it is easy to add a dining set and/or multiple work spaces to an L shaped kitchen. The average size of an L shaped kitchen ranges from eight to 13 feet in length by three to nine feet in width. 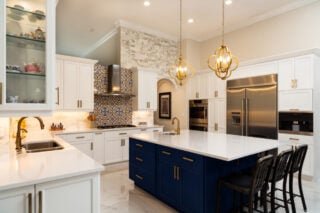 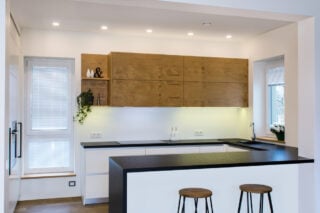 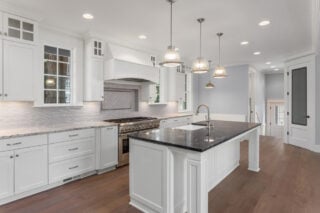 Frequently Asked Questions about Average Kitchen Size in the US

What is the average size of a kitchen in a home in the United States?

The answer depends on who you ask.

How much does the average kitchen remodel cost (based on its square footage)?

What are the different kitchen layouts?

The main types of kitchens are the one wall kitchen, galley kitchen, L shaped kitchen, U shaped kitchen (also known as the horseshoe kitchen), peninsula kitchen, and island kitchen.

Parting Words on Average Kitchen Size in the US 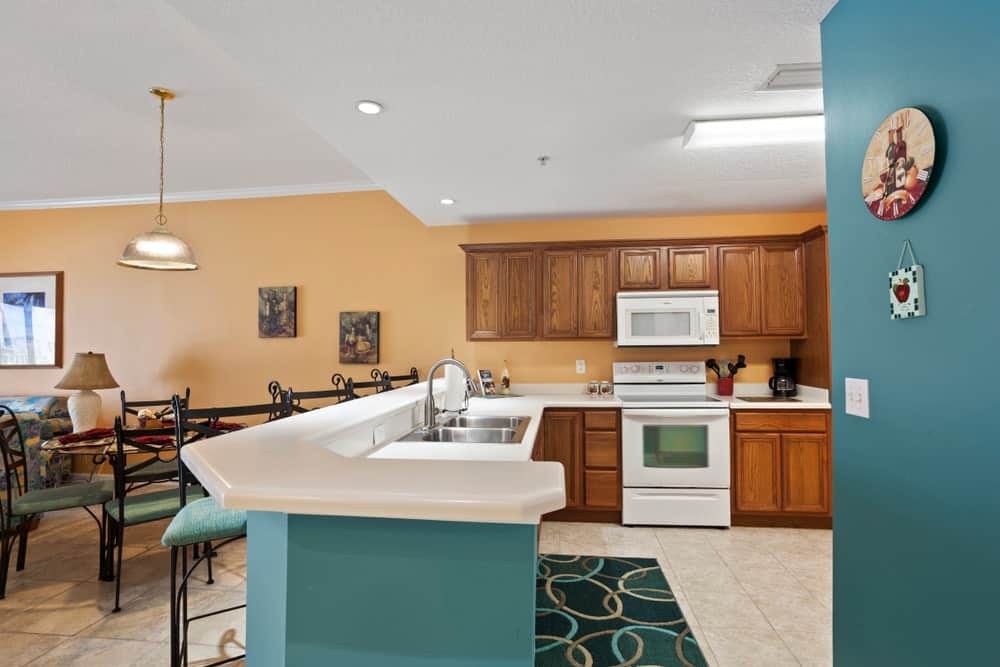 It’s more like 2,392 square feet, which makes all the difference in the world when drawing up kitchen layout plans and designs. Once you understand that the average size of a kitchen is only 10 percent to 15 percent of the home’s overall area (in square feet), this means that the kitchen in the average size home should be between 240 and 360 square feet in size.

This figure does not count condominiums or apartments, which typically have kitchens that are between 100 and 200 square feet in area.

As a result, you could end up with not only much more kitchen than what is truly needed, but also with appliances and other amenities that are much more expensive than what your budget can accommodate.

Instead, in your final analysis, consider what you want and need only when it comes to kitchen remodeling, and nothing more. In the end, your new kitchen will end up being exactly what you want and need, and will be able to serve your needs and that of your family. Instead, you will have a kitchen that you can be proud of and will serve you for years to come.