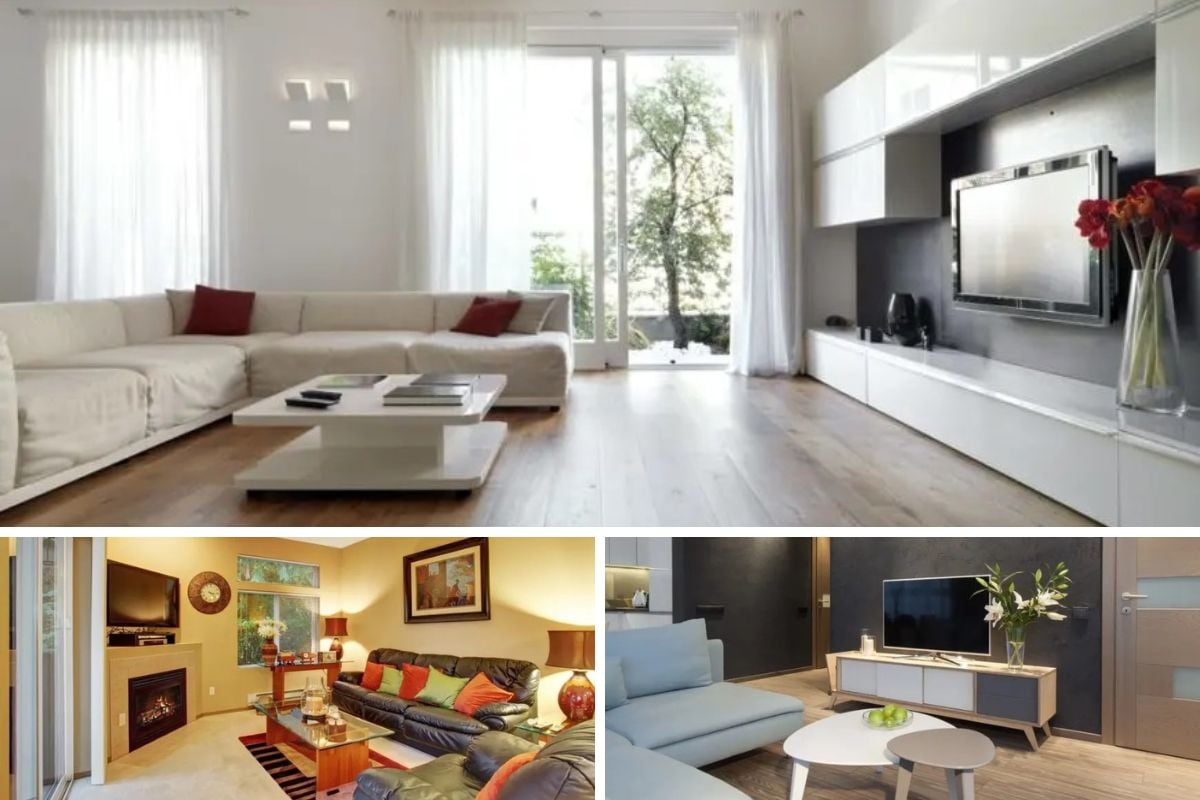 There are few things about a home that project as much of the personality of its owners, or the home’s glamour, and yes, livability, as the living room. This is true for a wide variety of reasons.

The variety of possible uses for the average living room should be taken into serious consideration whenever a discussion of building, remodeling, or even redecorating one is being considered.

Next to the kitchen, the living room of a home may be the room where a family spends most of the quality time together and with other loved ones; as previously stated, living rooms can sometimes also function as guest rooms, among other things.

It doesn’t matter whether you are building a new home or remodeling an old one; regardless, you should make sure that the living room in your home is large enough to accommodate everyone in your household, whether family or friends.

In this article we’ll discuss the standard size of the average living room in the U.S. 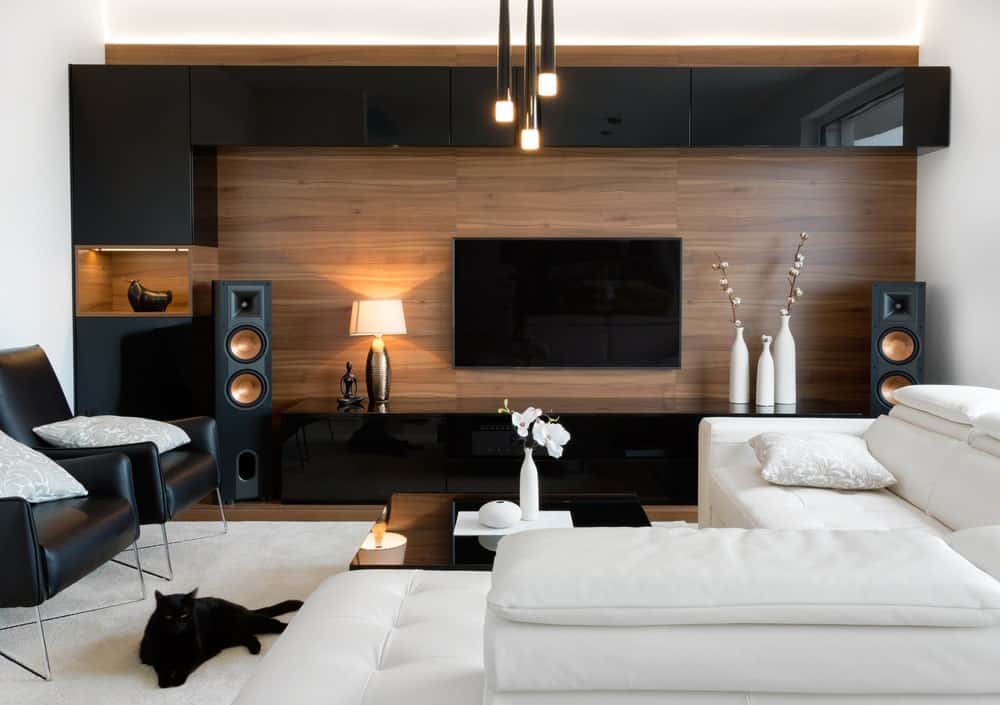 It follows, then, that the average size of individual rooms in homes in the U.S. has increased over the those of the past from 507 square feet to more than 971 square feet.

On a square foot basis, the cost of new home construction has remained relatively stable over the same number of years as the average home size has increased. However, this stability includes an inflation-adjusted price per square foot in new houses since 1973.

The cost per square foot of a new build home lies in a range from roughly $107 to $128 per square foot. But, keeping in mind that the average home size in the US has dramatically increased over this time as well, this means that construction of new homes is more expensive than it was in years past. 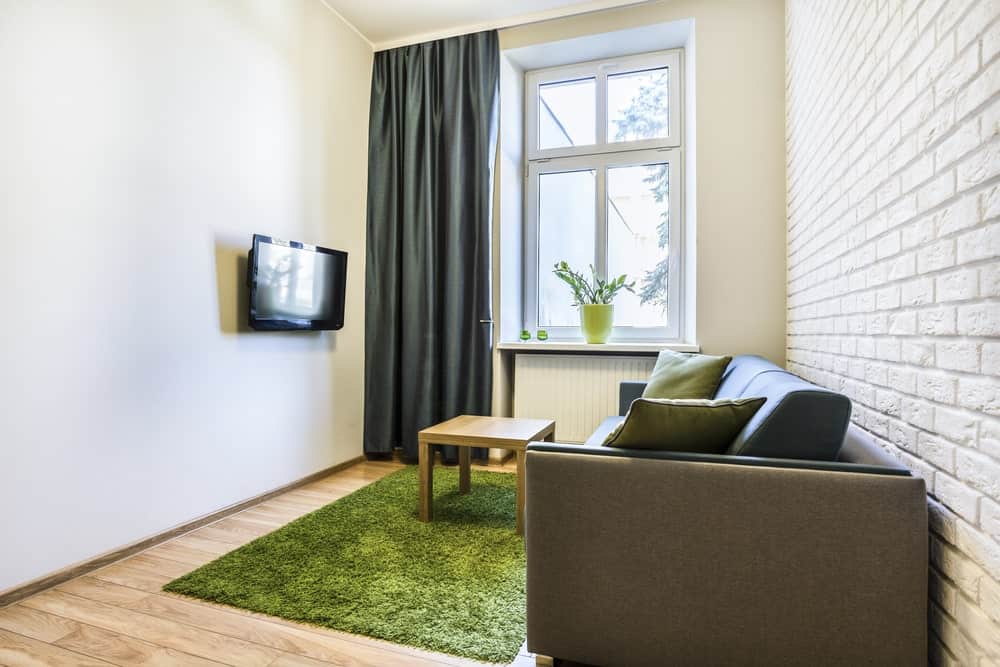 For all of its complexities, there are several assumptions that can be made about a living room, no matter what the living room size is. First, most living rooms are rectangular. This understanding makes things significantly easier when you consider building, remodeling, or just buying furniture for such a space.

When you consider the typical living room shape and layout, scaling normally becomes the next and biggest priority. Scaling involves buying living room furniture that fits in the existing space.

Regardless of the living room size, it’s important to understand that a living room’s primary purpose is to promote socialization and conversation. To facilitate these activities and foster connection, most people allow for an area with a minimum size of seven by ten square feet in the creation of a small living room.

To allow people to circulate, one should add an additional three square feet to the overall footprint of a living room. This size living room would only allow for a small couch or a loveseat, but for a few people, that should be adequate.

A living room that is slightly larger than the one discussed above would take up a minimum size of 10 by 13 square feet in area. This size living room could accommodate a small sofa, a television, and two chairs.

This would allow room enough for four or five people to sit and converse in the space. A solution to increase available space in a small living room could be to mount the television on a wall.

With a little creativity, a small living room might also provide room for a fireplace. In a small home, 10 by 13 square feet is usually the optimal size for a living room. It’s not enough to entertain a larger party, but for a small get together, a living room of this square footage should be more than adequate.

This standard size living room is plenty large enough for a family of four or five members to enjoy an evening together, as well. 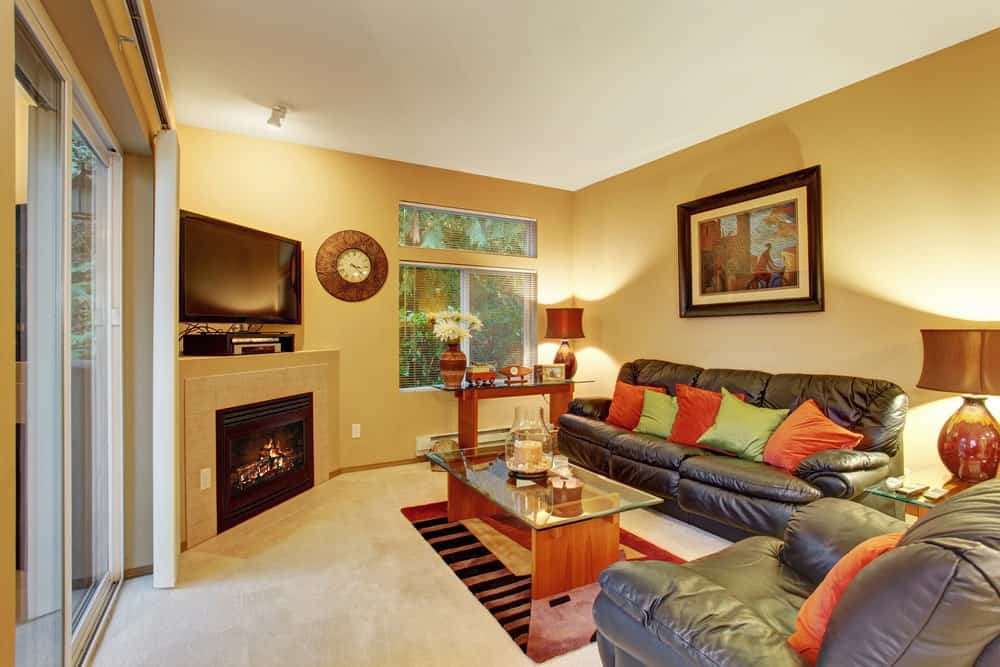 Most people might call a medium size living room one that is about 12 by 18 square feet in area. A living room of this standard size would include a conversation area for roughly six to seven people, each seated, whether on chairs or a standard sofa.

This size living room could also accommodate a freestanding television and a fireplace. If the television is mounted on a wall, it could create a more open area in the room, or space for another chair or a small table.

In order to contain ten people in a living room with this square footage, creating four conversation areas in each corner of the room would most likely be the best solution. Otherwise, a medium-sized living room is usually large enough to be enjoyed by a medium-sized family, whether they are watching an evening of television, playing a game, or enjoying another type of activity together. 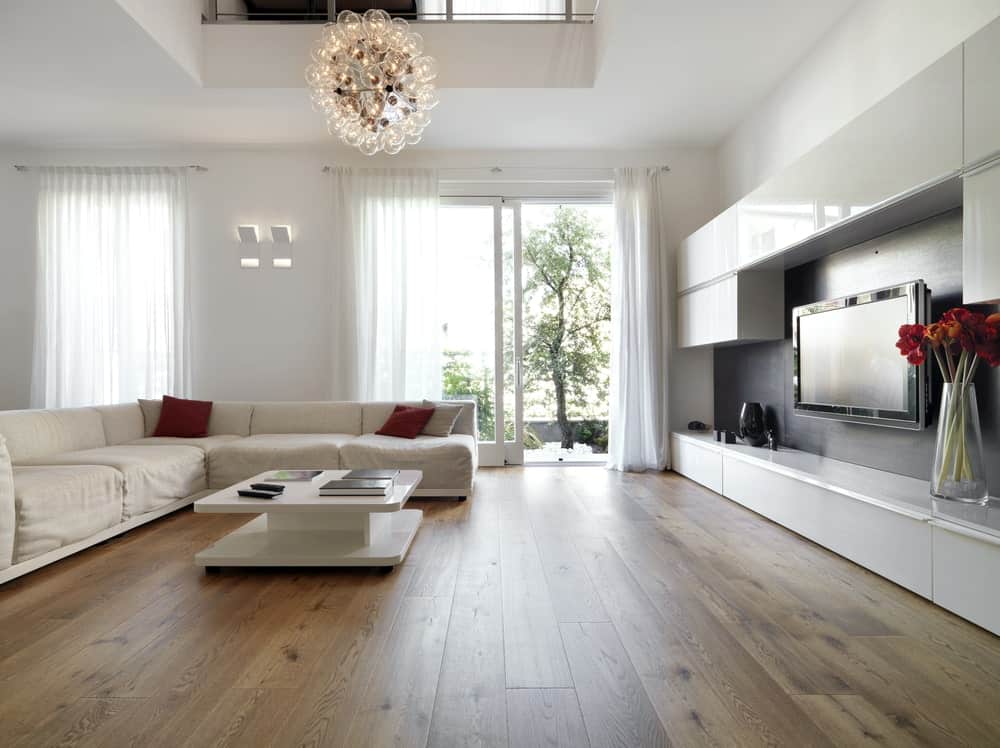 A living room that is 15 by 20 square feet can be called a large living room. Fortunately, with a living room this large, one can accommodate a lot more items and spaces than any of the previous living room sizes we’ve discussed.

With this amount of square footage in a living room, you can bring in sofas that you can position away from the walls. This creates more circulation area in an average living room, and means that a living room of this size can perhaps accommodate even larger sofas than are more elaborate than those designed for smaller rooms.

Smaller living room furniture pieces can also be used to create furniture groupings for separate conversation areas in other areas of the room. A large living room also allows a homeowner to bring in more furniture, such as a games table or a writing desk.

A large living room not only gives you more options for things to do when you have company over, it also separates the sections of the room further for more private and more conversation opportunities.

If you don’t typically entertain a lot of guests, or if you choose to entertain for the most part in another room of your home such as the kitchen or patio, you might not need a large living room in your home. This is also true if you live in a part of the country where the outdoors can and does serve as your main entertaining area.

In these cases, a small living room might be the best use of the space you have, while the outdoors or atrium could serve as a social area much of the time.

What are living rooms used for?

The primary function of a living room, sometimes also called a family room, is to facilitate socialization, whether through conversation or other forms of bonding. The function of the average living room means that a living room should have space for seating and clearance to move around the room.

What are the dimensions of the average living room in a home in the U.S.? 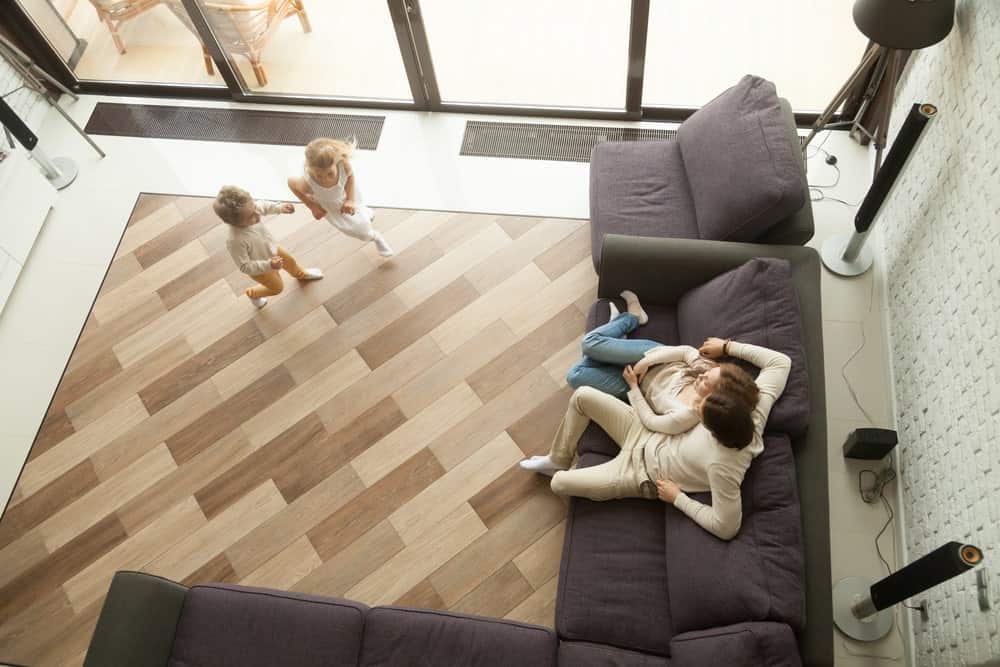 For everything we hear in the media and otherwise about the stagnation of wages and the loss of household incomes, not to mention the loss or shrinkage of the middle class, increases in income equality, and other gloom and doom reports about the future of Americans when it comes to the economy, the future in the U.S. is actually quite bright.

The homes Americans are purchasing now are considerably larger than the homes their parents bought only a few decades ago. In the average home in the U.S., the average living room is much larger than those found in the homes that their parents or even their grandparents bought in the 1970s and before. Also, the homes that Americans are purchasing today have almost twice the space of those homes purchased 42 or more years ago.

It is also important to note that not only are the homes Americans are buying today larger than those bought only a few decades ago, they are cheaper to own and operate than the homes owned by their parents and grandparents.

Homes today are much more energy-efficient, are larger, and come with more rooms than the homes of years past. Not only this, but living rooms contain fireplaces and other luxury features that were far less common in the average living room in years past.

Homes today include modern features, such as central heating and air conditioning, with over 90 percent of homes equipped with these convenient amenities in 2015. In years past, features such as these would have been considered luxuries, not necessities.

It is safe to say that although the standard in homes has improved in recent years, living rooms have led the list of attractive additional features for homeowners. It is an undeniable fact that living rooms have gotten larger and as a result more comfortable, but so have other rooms in the average home in the U.S. It is also worth noting that building materials have also improved in quality, which have made modern homes more customizable and more attractive overall.

Overall, the increase in the amount of living space, not to mention the addition of amenities like larger garages, fireplaces, and other such features, have made the average home of today much more elegant and livable than the homes of the past. This is a direct contrast to the decrease in family sizes over the same amount of time.

Improvements in housing quality, increases in the number of housing features, and the relative affordability of new homes, all mean that the living standard enjoyed by Americans today is consistently improving.