Gallery featuring images of the incredible Pixel House by Slade Architecture and Mass Studies, a unique brick home design that you have to see to believe. 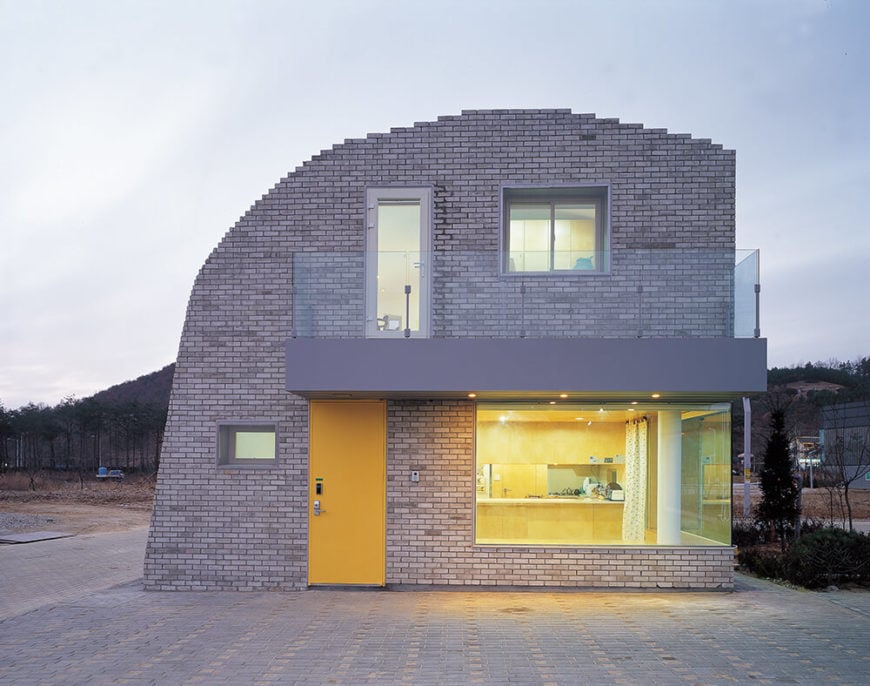 Welcome to our gallery featuring the uniquely styled Pixel house, a home designed by Slade Architecture in conjunction with Mass Studies.

The first thing you’ll notice about this home is its unique facade and shape, a curved structure comprising thousands of angular bricks.

As the designers intended, these bricks create a “pixel” effect, like zooming in on a digital image.

The home, built for a young family with two children, was crafted to fit in yet stand out in the neighborhood, as the last in a row of houses. It is the “point of rupture” between the continuous facade of the homes and the wild natural environment beyond.

The designers viewed the row of houses as a relationship between building and landscape, an opposition between formal clarity and territorial ambiguity that they wanted to break down. That sounds like high concept art, but the end result is quite practical.

The rigidly constructed home is softened and rounded to a point where its geometry appears somewhere between the standard homes and the landscape surrounding. It’s truly difficult to categorize.

There’s a palpable tension between the contoured organic shape of the home and the distinct choice of materials. By using simple orthogonal bricks, the smooth shape is “digitized” into discrete units.

The bricks provide a tangible sense of scale and design, highlighting the process of turning abstract forms into a real structure. The “grain” effect increases as one approaches the home, “zooming” in like a digital picture, until the bricks are individually grasped.

As the number and density of pixels determines the smoothness of a digital image, the smooth curve of the house is determined by its high number of bricks. The result is a 9,675 pixel house, with 1 pixel equalling 1 brick.

The center of the home helps define the primary plan, placed adjacent to the semi-private backyard. It’s an inviting, communal space that the owners hope to use as a community center during the day and as a private living space at night.

This thoroughly unique project was built in Heyri, South Korea and completed in collaboration with Mass Studies. 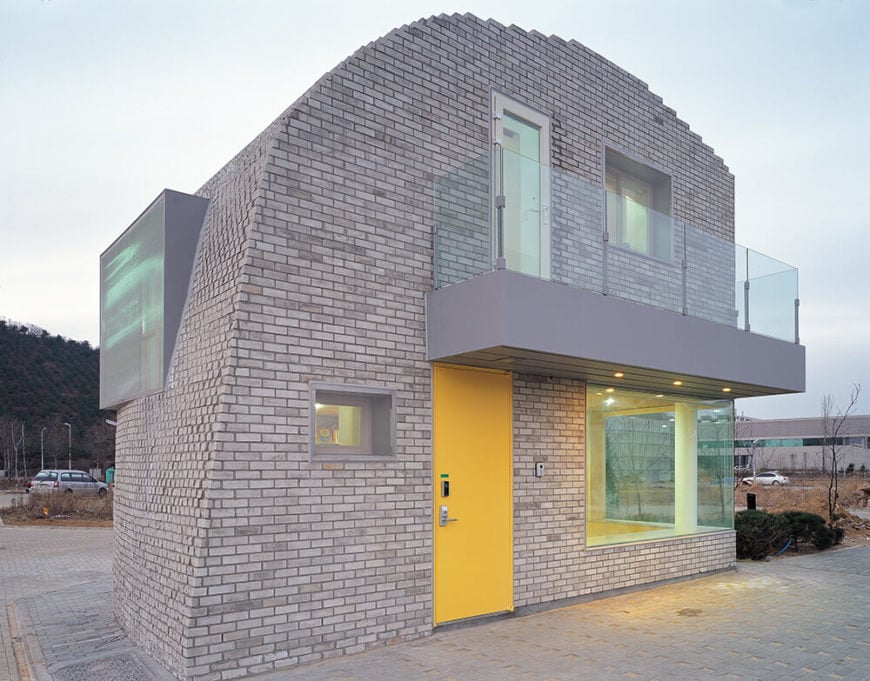 Here’s a close look at the visually striking home, its organic curves turned staccato at the edges where we see individual bricks exposed. The large windows and bold yellow door make for a complex appearance. 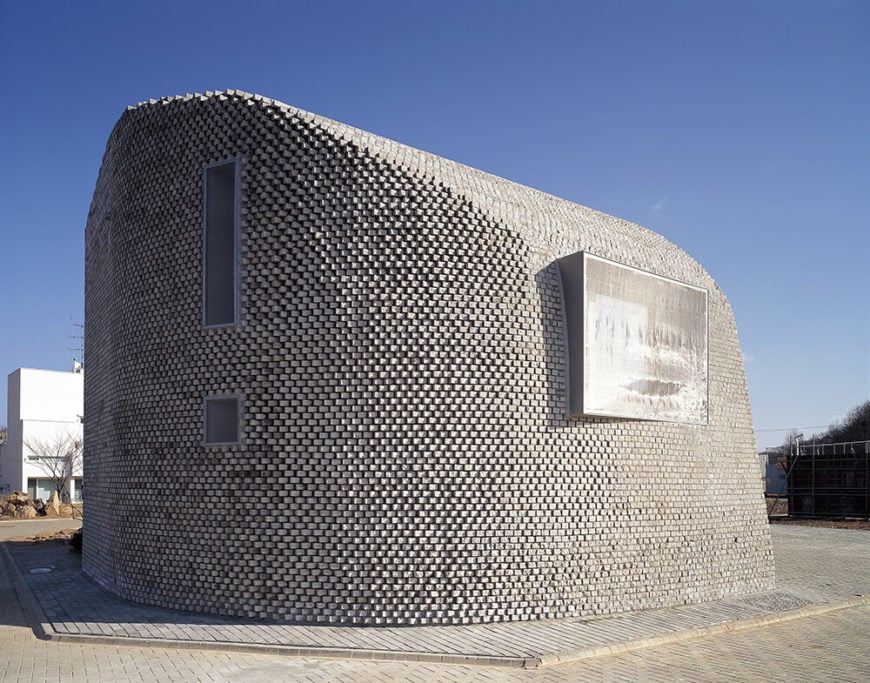 Seen from the rear, we can appreciate the total effect of the nearly 10,000 bricks that create a curved structure. The only sharply angled pieces of the home are the windows. 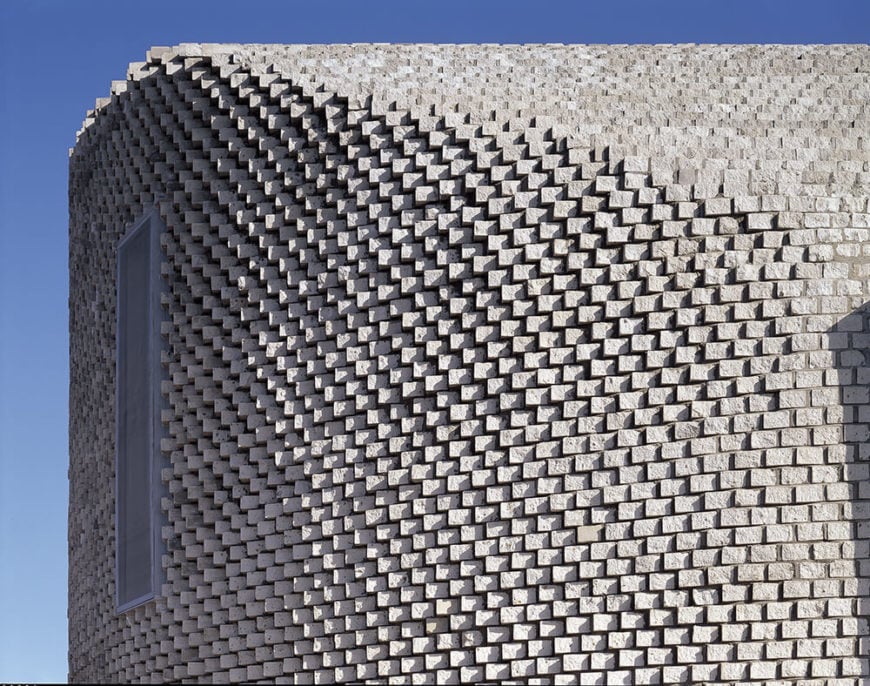 Light plays off the brick structure in unique and intriguing ways, creating a cascade of shadow that changes its color as the sun sets. 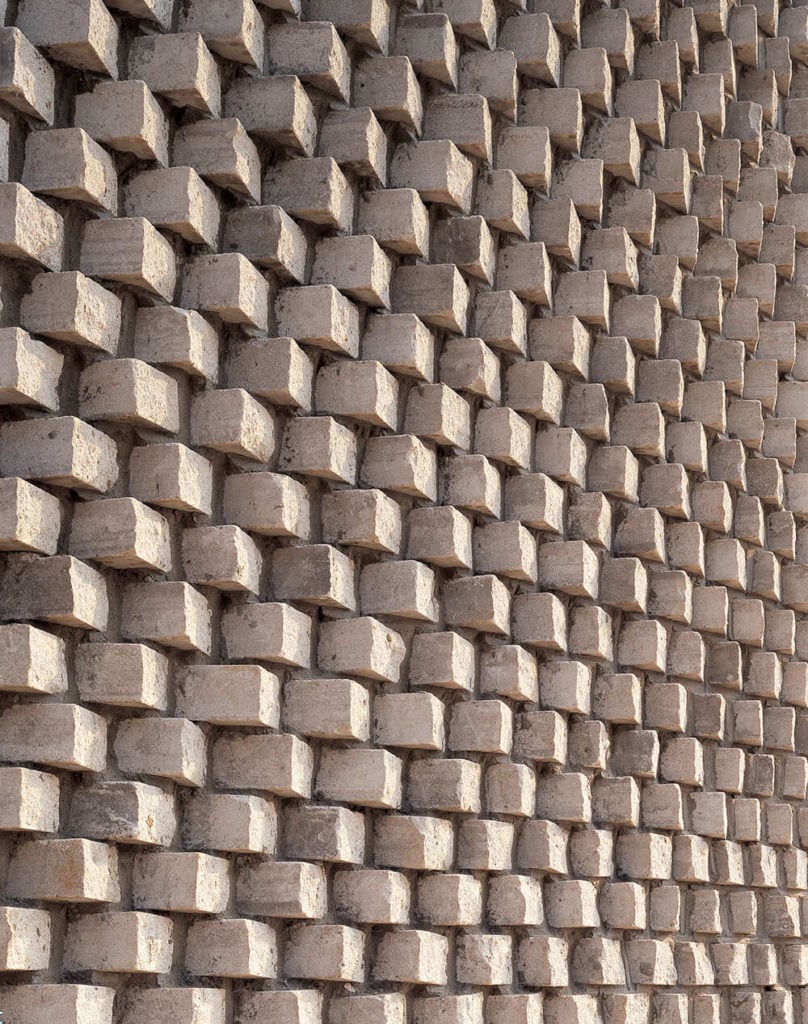 Here’s a close look at the facade, showcasing the individual character of the bricks. When viewed so close, they seem perfectly normal and boring. It’s the cumulative effect that gives them their power. 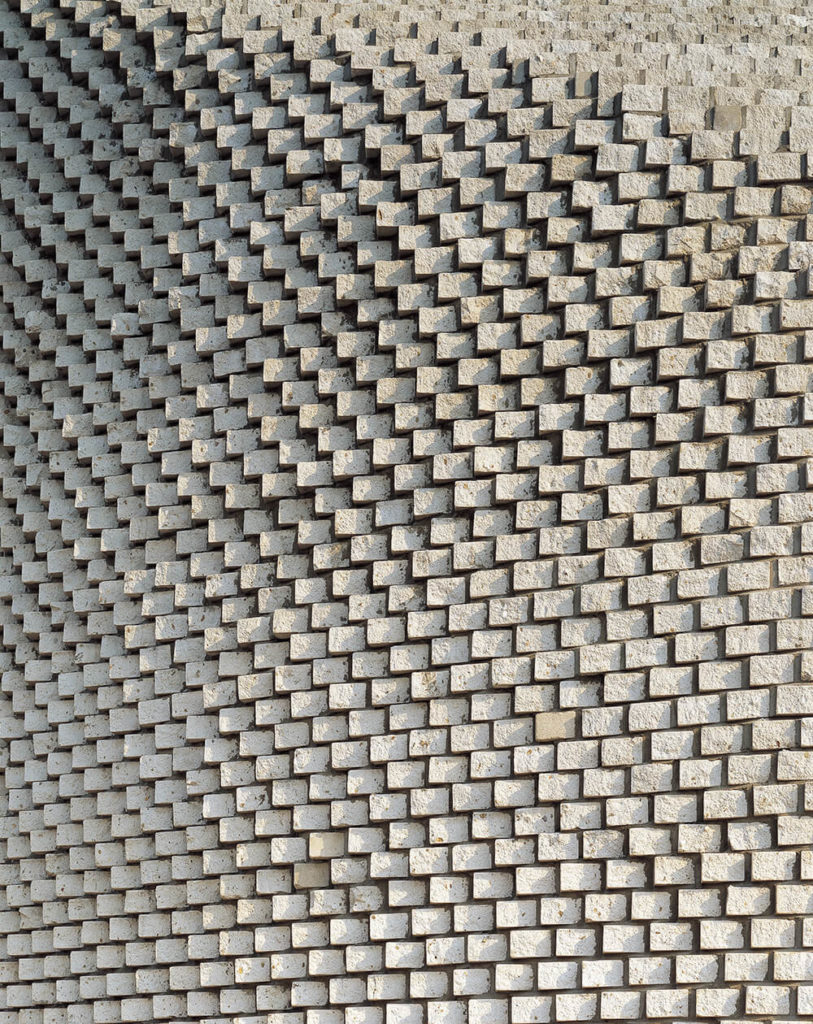 Here’s another detailed view of the brickwork that defines this home, shown in late-day sunlight. The incredible pixel effect only increases as we take a wider view. 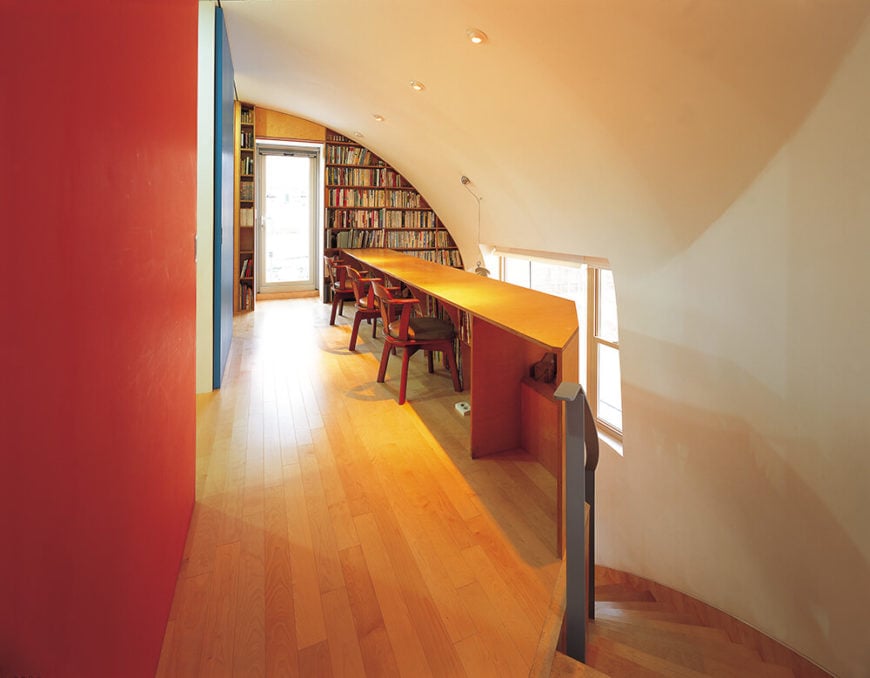 Moving inside the home, we see how the organic curves of the exterior play out inside. The sharp angled brick gives way to smooth white walls and rich natural wood, highlighted by splashes of primary color. 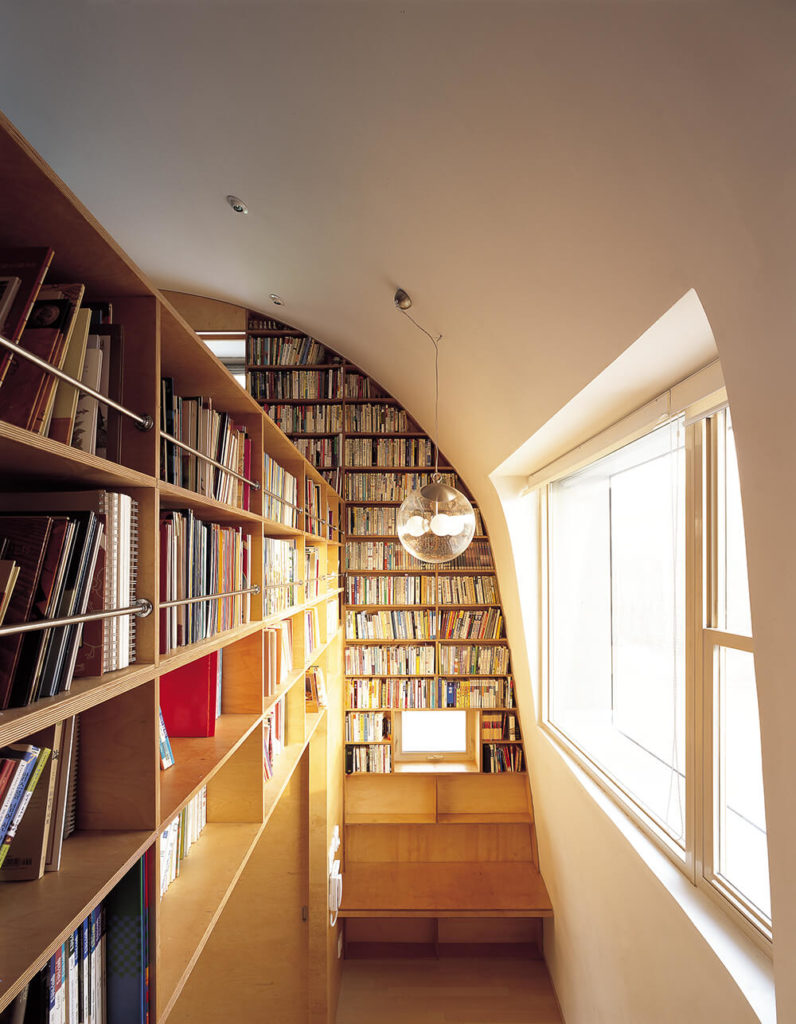 The interior comprises a large open, interconnected space that sprawls both horizontally and vertically. A massive library‘s worth of shelving covers the walls, transforming the look of the interior. 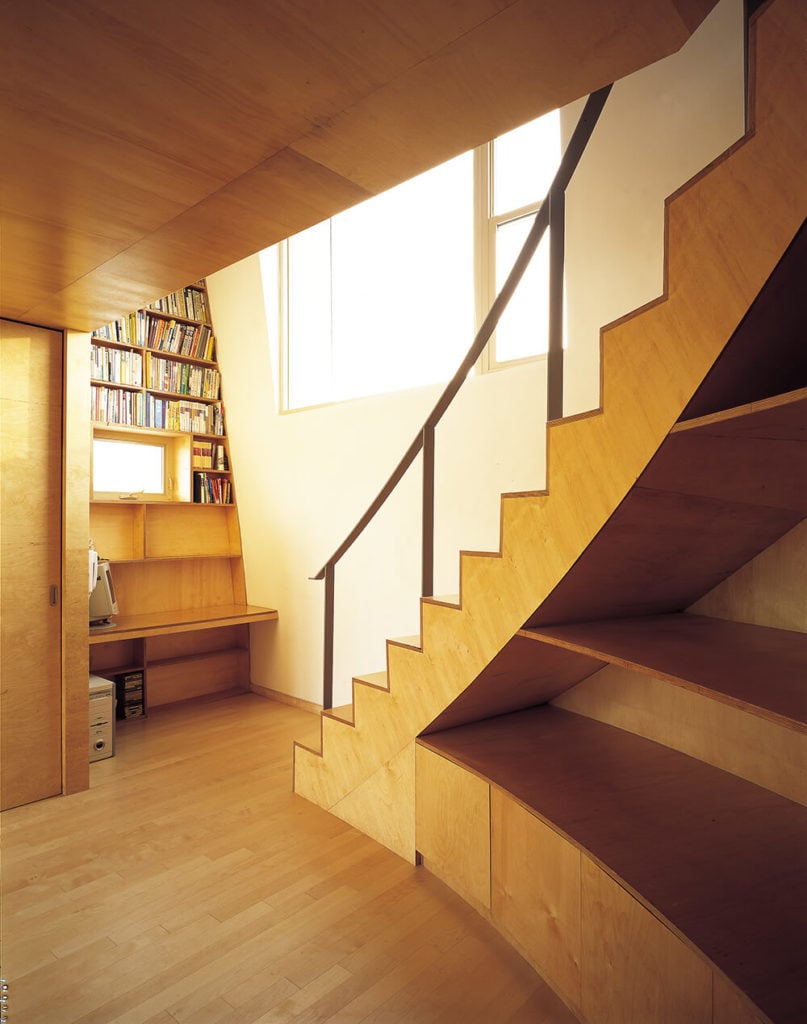 At the bottom of the lengthy staircase, we see much more of the sleek natural wood paneling, shelving, and hardwood flooring that informs the interior. Large windows allow natural light to spill throughout the home. 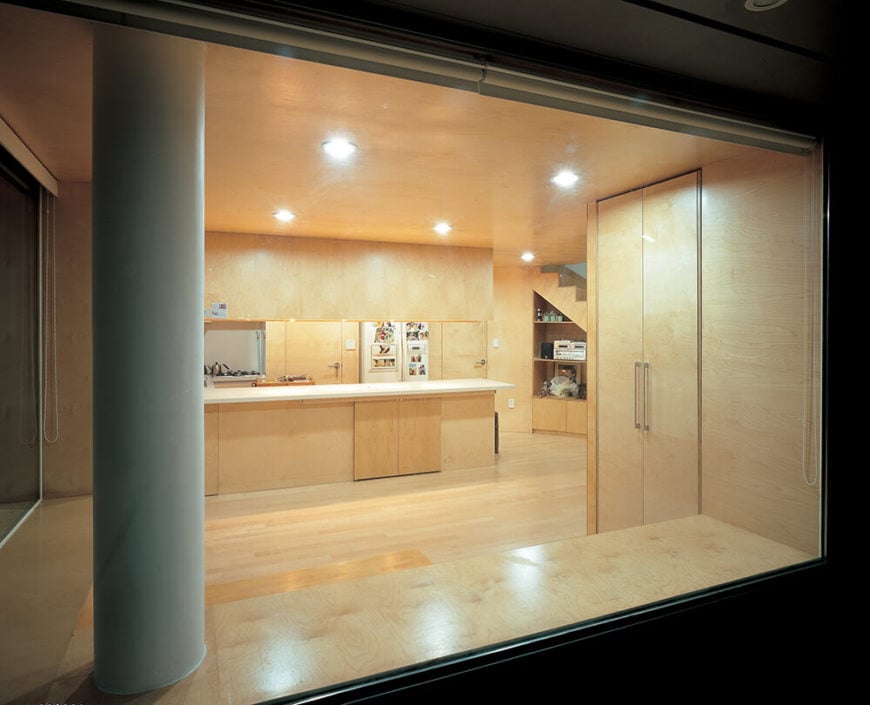 Here we see the kitchen through the lower level window, with that light natural wood tone spreading in every direction. From cabinetry to flooring, this warm and inviting texture covers every surface. 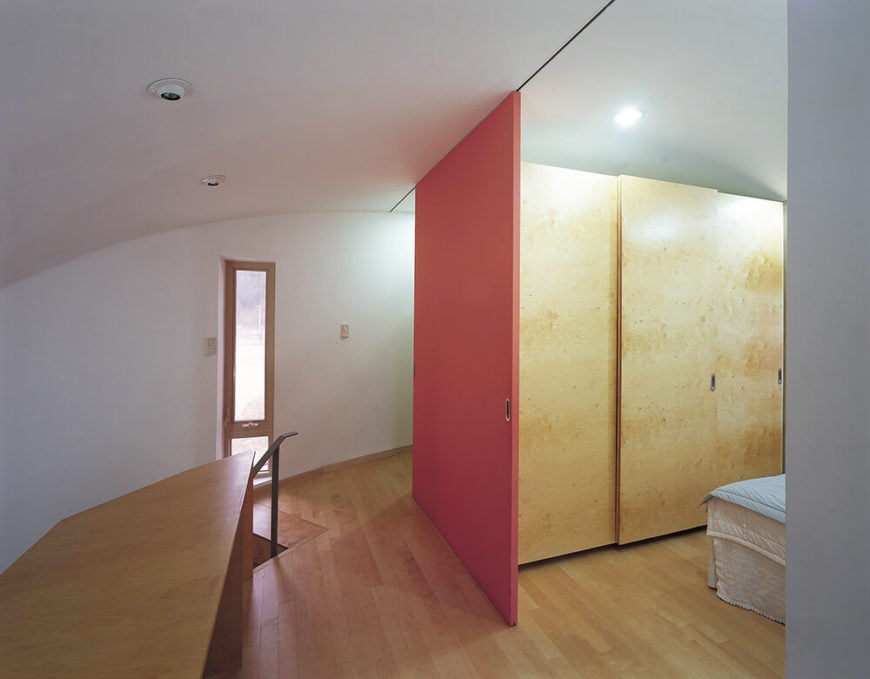 Moving back upstairs, we come to the private areas of the home, including this bedroom at right. Using simple but brightly colored sliding panels to enclose and reveal discrete rooms, the open plan becomes dynamic and accessible. 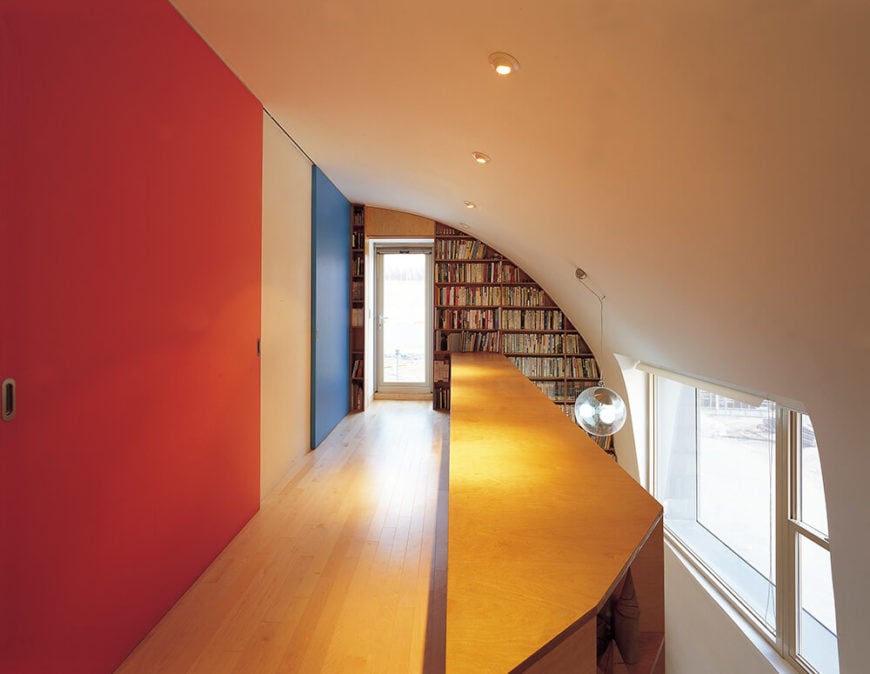 Turning the opposite direction, we see the singular hallway connecting the bedrooms on the upper floor, literally bookended by the library sized shelving wall at the far end. 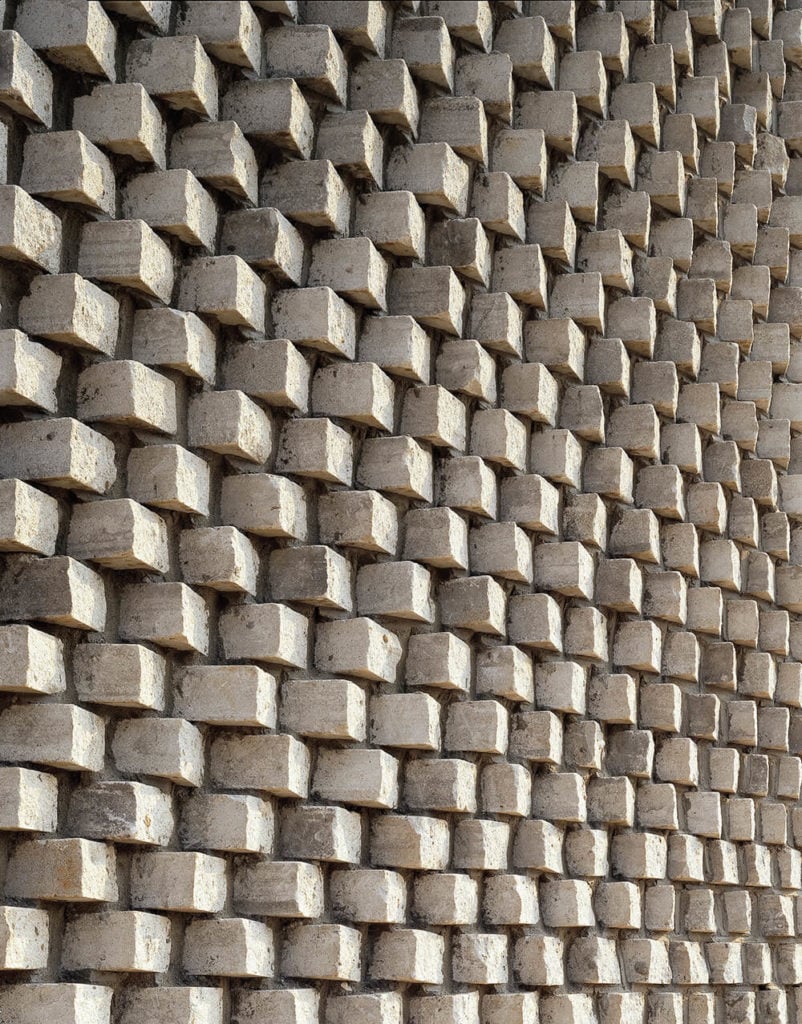 Here’s another look at the intricate “pixelated” brickwork covering the facade of the home. The cumulative effect here is mesmerizing. 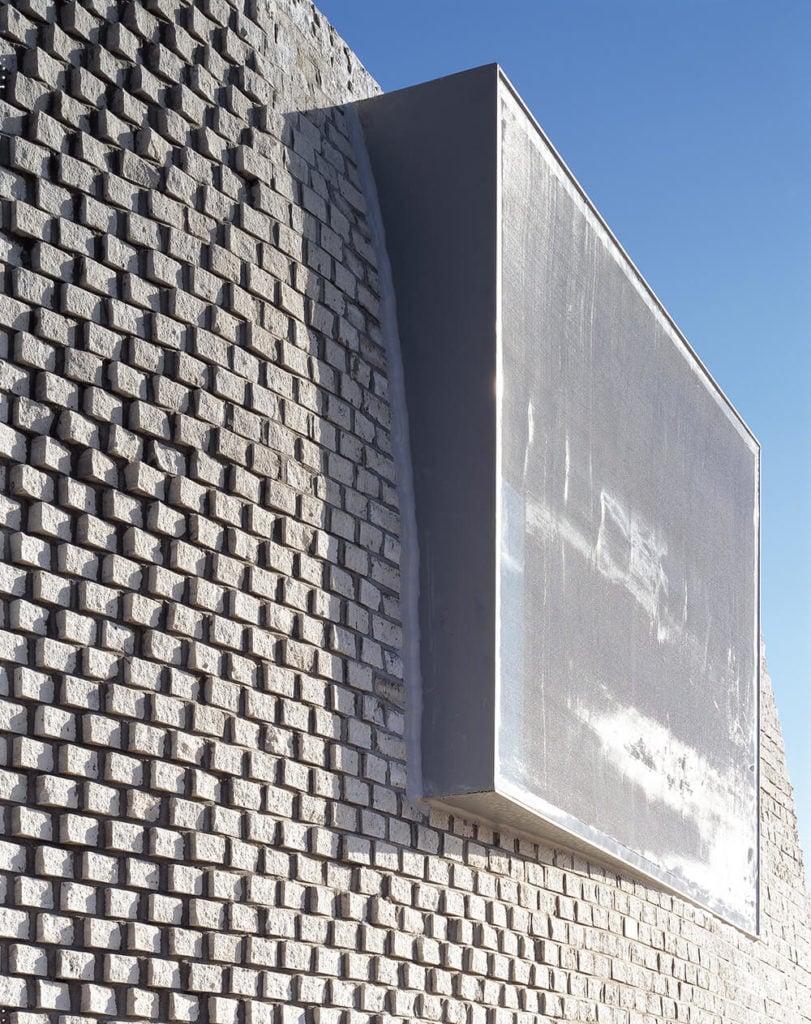 With the low afternoon sun hitting at the right angle, the brickwork casts a slowly evolving texture over the home. 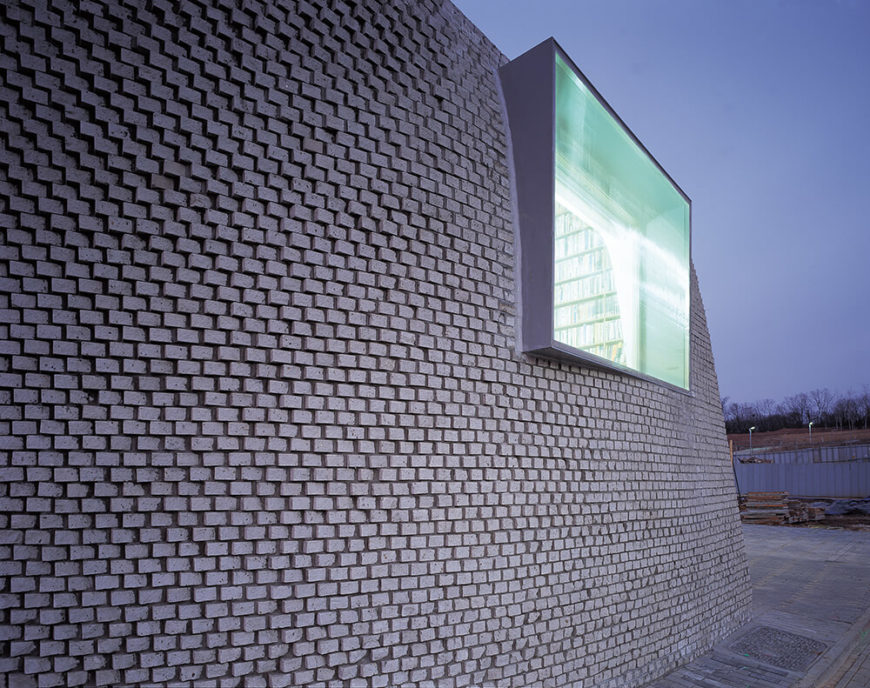 Finally, we leave you with a look at the large curve of the building, as the closer brick stand out, yet lose their individuality as the building curves toward the distance. The lone large window on this side adds a bold exclamation point on the whole structure.

Related Homes & Galleries You May Enjoy: