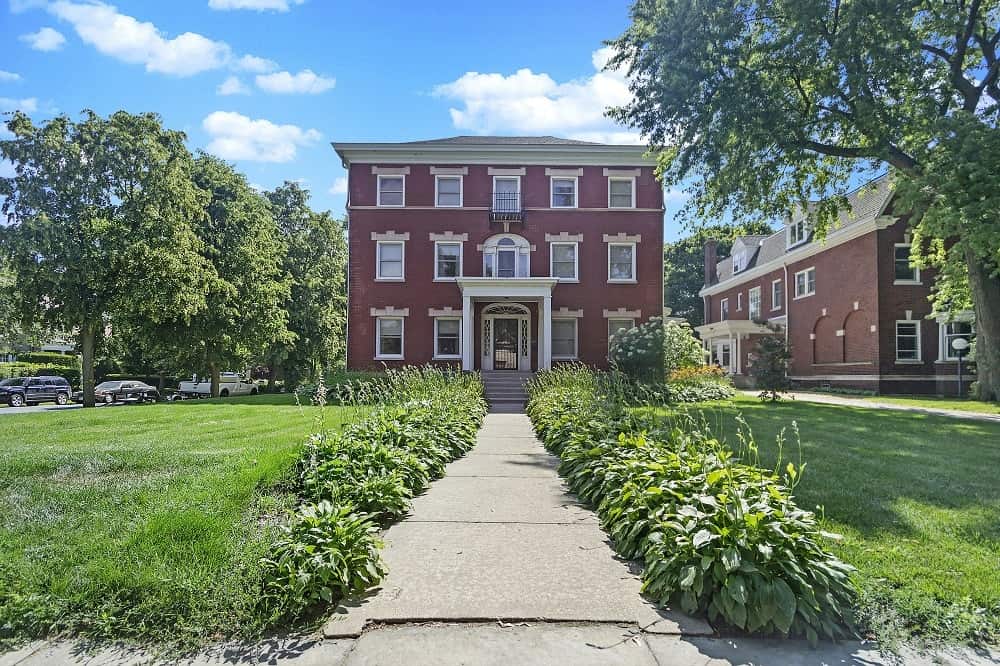 From the first to the second floor, there's a circular grand stairway that repeats to the third. Look up from the entrance foyer, and you'll be met by light emitted from a full skylight set within the high ornate gold ceiling.

The Chicago Bremner Biscuit Mansion has recently been placed on the market, listing with the KoenigRubloff Realty Group. This 11,097 ft² red brick colonial house dates back to 1899, and its design, as well as many of Chicago’s stately architecture, is attributed to Benjamin Marshall and Horatio Wilson.

What modern architecture has lost, the nine bedrooms Bremner Biscuit Mansion has plenty, such as the large multipurpose rooms, a library, and a third-floor recreation room.

The Bremner mansion was built for David F. Bremner, a bread magnate who was moving his biscuit company from Illinois in 1871, soon after the devastating Great Chicago Fire. Renowned for his cookies wafers and crackers, the baker made sure that each product would carry his initials DFB, which was popularly connoted to ‘Damn Fine Bread.’ Situated near the University of Chicago, the three-story Bremner Biscuit Mansion sits in the neighborhood of former US president Barack and his wife Michelle Obama’s Chicago home.

With a total of 14 bedrooms, the Bremner biscuit house has been listed for the Catholic Archdiocese of Chicago. The church has had ownership of the Hyde park- south Kenwood mansion since 1966, and they are asking for $2.35 million. The vintage classic mansion is packed with originality, like the interior circular ceiling cutout that lets through light onto the 1st-floor foyer from a skylight above.

This house’s bathrooms and kitchen are still in their original state, having never been renovated, while colonial craftsmanship is reflected by ornate plaster ceilings and mahogany wood paneling. The bedrooms are located on the second and third floors, and the Bremner mansion features a full basement. A formal room, kitchen, and a vast library complete with built-in wood bookcases occupy the first floor of the Bremner Biscuit Mansion.

The Bremner wafer crackers are a popular condiment for cheese and wine enthusiasts and are still on sale from grocery stores across the country. Though the company was successful in its own right, real fame came after David F. Bremner’s sons started a bakery dedicated to the butter wafer in 1905. When the internal combustion engine came to replace the horse buggy in the 1920s, Bremner products found wider distribution using motor vehicle trucks.

The invention of the electric band oven also gave the company a higher production output, and the formulation of special packaging to prevent cracker breakage. Other products in the Bremner line include sesame seed, soup, and chili, cracked wheat, pure sunflower oil crackers. For five generations, the Bremner family has continued to back their products with integrity and superior quality.