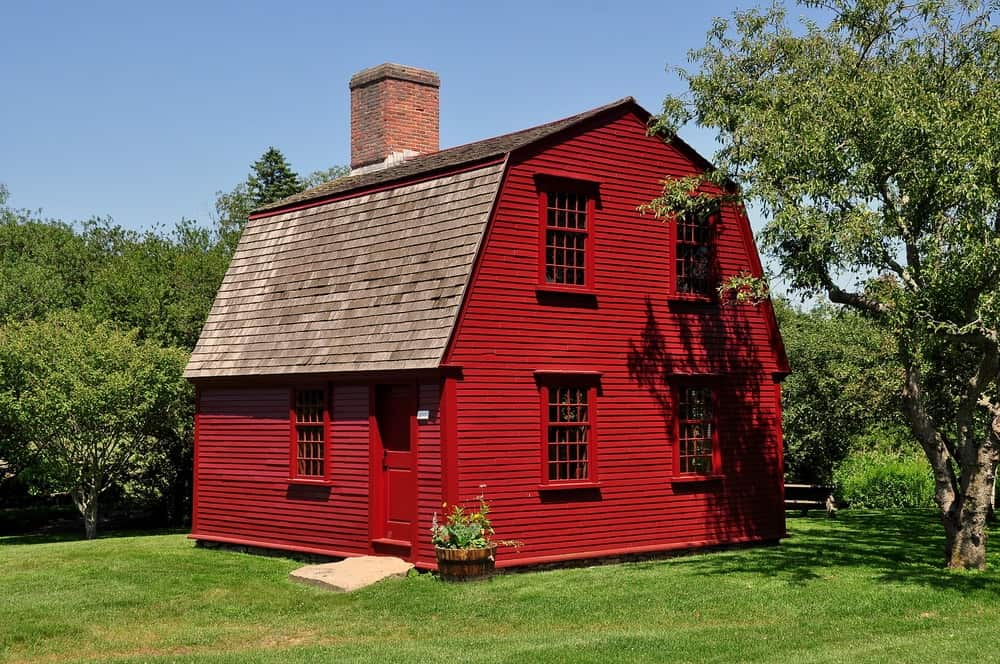 When you’re out driving, walking, or riding, you’ll always notice the silhouette of a gambrel roof right away. You probably have no idea what it’s called, where it came from, or how old the design is, but you are definitely familiar with this roof.

The gambrel roof is one of those designs that crop up all over the U.S., though you only see it from time to time in most places. You’ll see it in suburbs, out in rural areas, and sometimes, even in urban areas. You’ve definitely seen this roof a lot but you probably don’t know why the gambrel is such a great option when you’re shopping around for roof styles.

The gambrel roof is most commonly associated with barns and farmhouse buildings, so you may think of this as the “barn roof.” The silhouette is immediately recognizable. Imagine a standard piece of paper. Now, fold it in half widthwise. Open it up and set the folded paper upright on a table, with the folded edge pointing up. You should have an upside-down V.

Now, make folds on either side of the V, also widthwise, that are the same on both sides Basically, you’ll take each arm of the V and bend each end. Set the open paper on the table again. That’s the outline of a gambrel roof. This design is very common in Dutch Colonial buildings in addition to farms ad farmhouses.

Constructing an actual roof is a bit harder than folding a piece of paper. Gambrel roofs typically have a peak that is a 30-degree angle. The lower slope is usually 60 degrees. However, gambrel roofs can be designed with different pitches and still maintain that iconic silhouette.

This is a popular roof design for barns, storage sheds, and farm structures of all kinds, not to mention historic homes styled in Dutch Colonial designs. Because of its association with barns, gambrel roof designs seem to give buildings a bit of a rustic, rural look. But there are some pretty big benefits to the gambrel roof that are definitely worth considering.

The Benefits of a Barn Roof 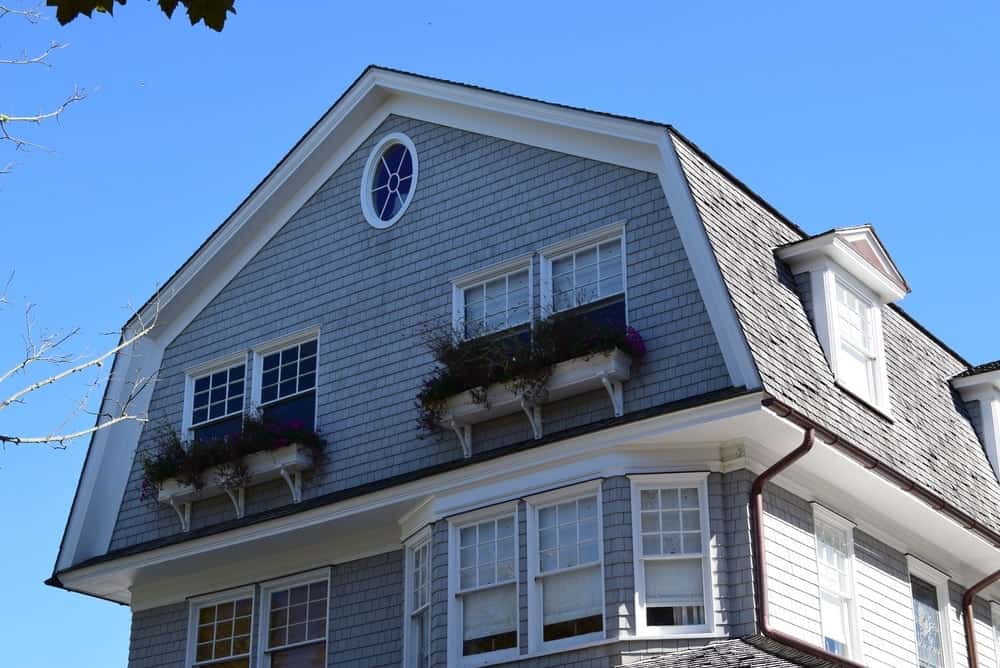 You can just look at the gambrel roof and see one big benefit: space. There’s more room under a gambrel roof than you’ll get under a gable roof, which is a very standard, popular design that looks like that original inverted V. The gambrel is one of the roomiest of roof designs not just because of the wide, distinct slope but also because of the way it’s built on the inside of the house.

Gambrel roofs are incredibly easy to construct, compared to many other roof types. Gambrel roofs don’t need support beams or columns, which many other designs require. This means that the entire area inside the roof is pretty much empty and open, which leaves a lot of space to be filled up. It’s because of the spaciousness of the design that it’s often seen sitting on top of barns, which need the loft space to store hay.

Builders use framing and trusses to construct gambrel roof designs. Gambrel roofs are so simple to build, the framing is done with standards two-by-fours. The simple roof construction is very affordable because so few materials are needed to erect it.

Gambrel roof designs are usually finished with metal siding, standard roof shingles or wood. Roofing companies are typically very familiar with this design and will be able to construct a gambrel roof relatively quickly and affordably, as compared to most other roof designs.

Because these roofs are straight and have no valleys, rain tends to roll off of them rather easily. It’s a very practical design for shedding water, which makes it a low-maintenance option. Gambrel roofs are not prone to water damage that can cause leakage.

However, this design isn’t ideal for heavy snows and/or heavy winds. The gambrel roof isn’t very aerodynamic and will suffer under repeated heavy winds, which makes this roof style less than ideal for hurricane-prone areas. Heavy snow may pile up in the transition between the slopes of the roof, so this isn’t a favorite choice ins areas where big snowfalls are common. 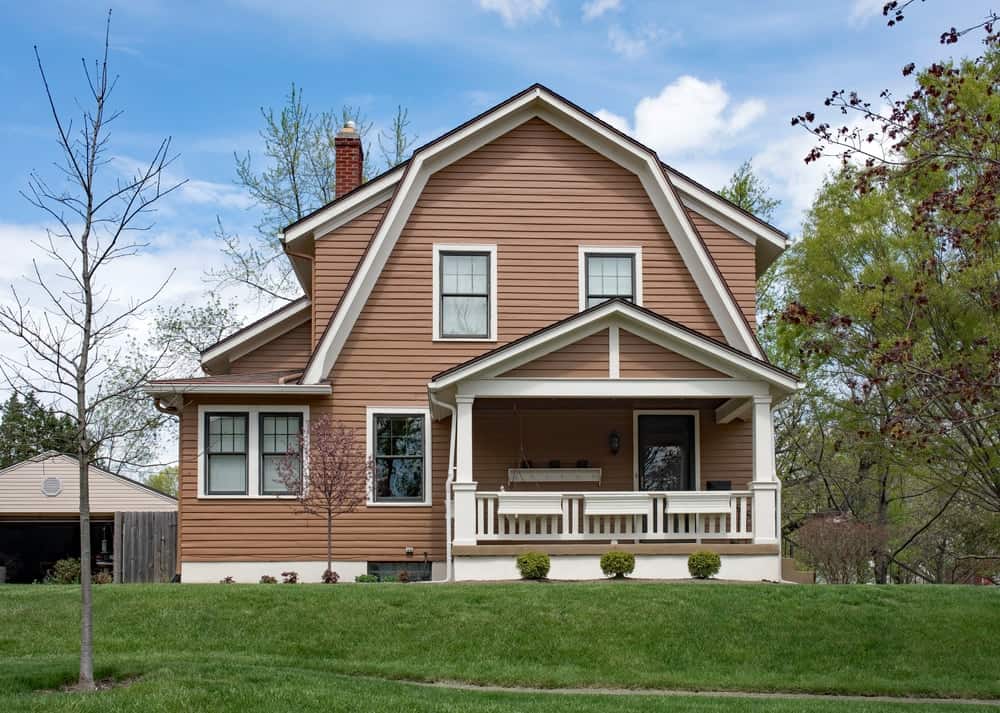 The gambrel roof is definitely historic, dating back hundreds of years. Even the word itself is incredibly old. It is probably derived from “gambril,” which referred to a crooked stick. Doesn’t that sound like a word that would describe the gambrel roof? This roof style was everywhere in Europe during the 16th and 17th centuries.

The design was in North America by as early as 1737, well before the U.S. was a country of its own. A written record confirms that buildings erected in this year were topped with the gambrel roof design. During the 18th century, the then-common design was known as the “Dutch roof.”

Variations in the standard gambrel roof design do exist. Sometimes, one side of the roof will extend down and outward to create an overhang for a porch or an outdoor storage area. In barns and farmhouse buildings, you will often see this area used for storing wood. In newer designs with gambrel roofs, dormers are often added to give the simple lines of the roof even more distinction.

If you want a roof that’s effective and affordable that will also give you additional indoor living space, a gambrel roof is really a perfect option. There are many reasons to choose this roof. It has started to become popular again in recent years and modern architects are finding all sorts of ways to integrate the distinct lines of this roof into their newest designs. The gambrel roof has been used to top buildings for centuries. If it wasn’t great design, this design would never have lasted this long.