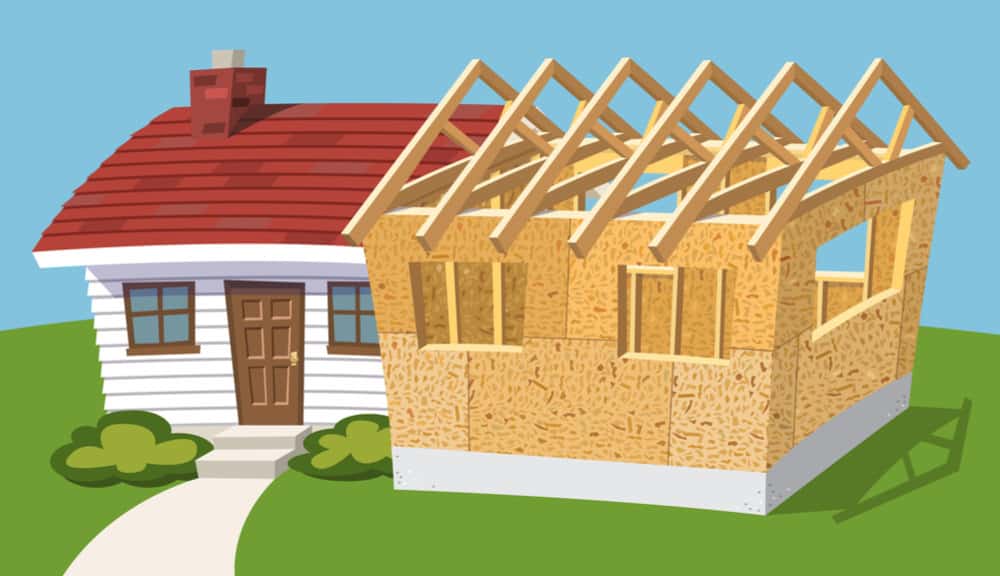 While this article focuses on configurations, we also have a very cool set of illustrations showcasing the different parts (anatomy) of roof trusses here.

If you need to build a truss, a good starting point is to get a solid understanding of the many options, designs and configurations.

A. Overview diagram of the different types and names of roof trusses

Below is a detailed breakdown and in most cases, an explanation of each type of truss. 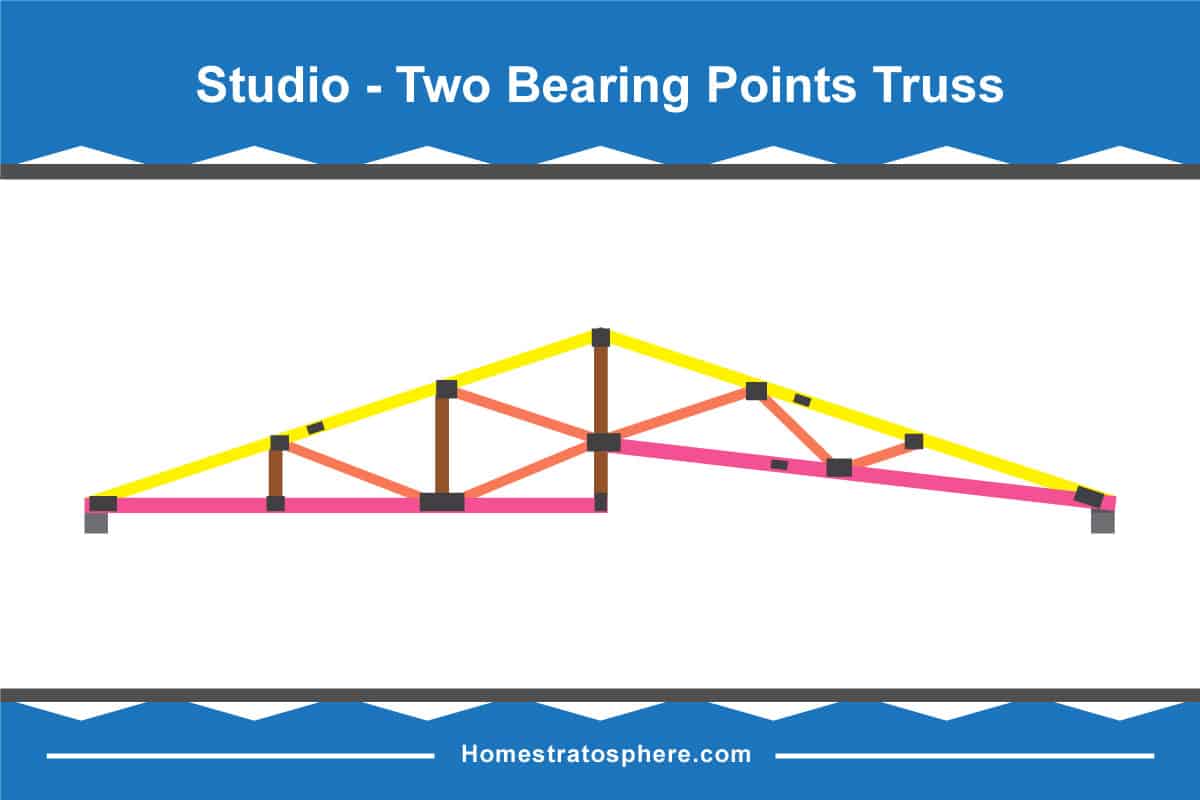 Used on larger trusses and for creating a pitched ceiling or an extra vertical space. 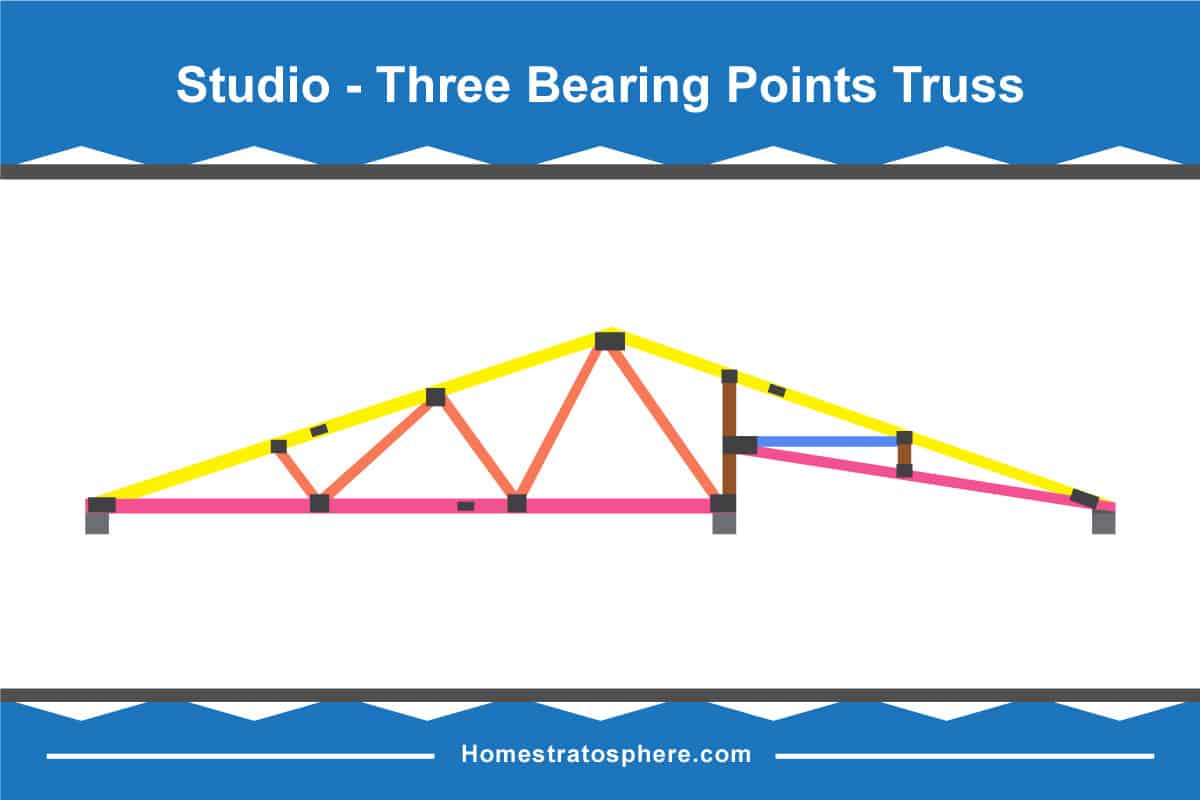 A pitch truss with a sloping (or non-sloping) vertical interior ceiling detail. It can take various forms and often used for aesthetic purposes, adding height and focal interest to the ceiling. This type of truss is perfect for the dining room, living room, great room and kitchen.

See also  The 17 Parts of a Roof Gutter (Illustrated Diagrams) 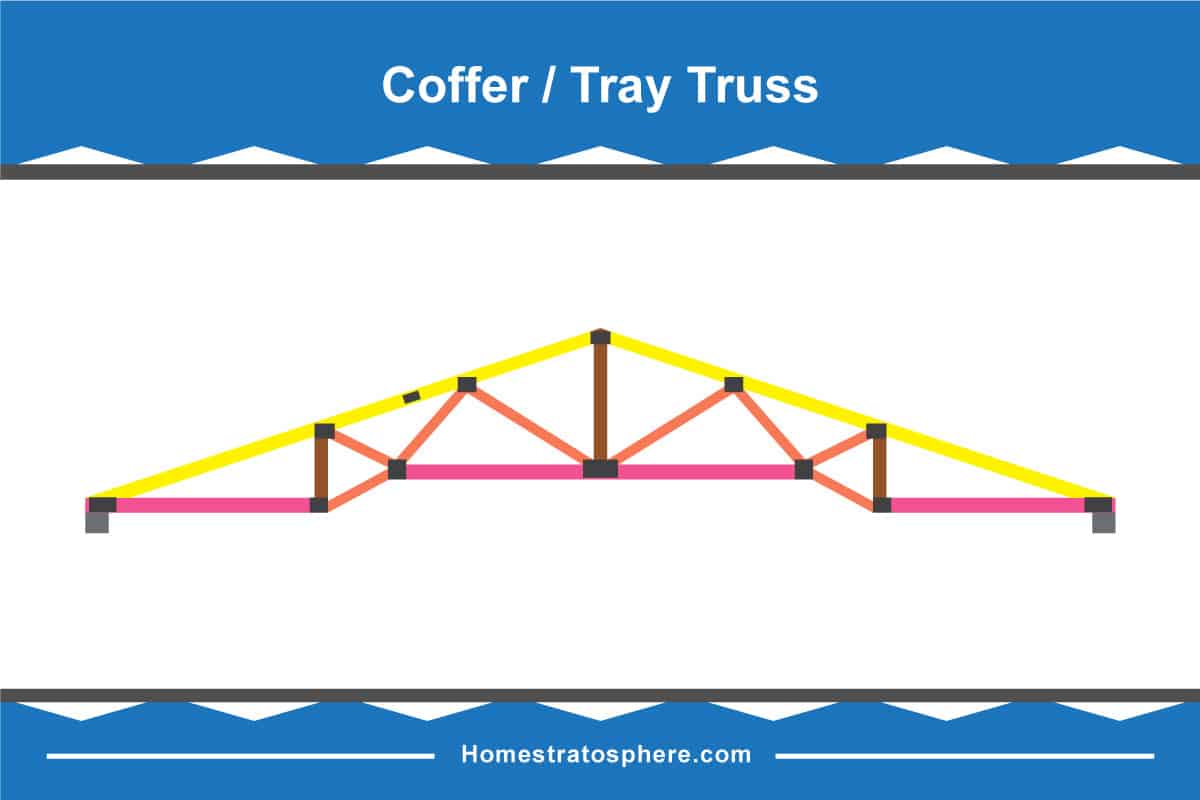 This has a characteristic barrel-shaped ceiling. In order to create the semi-cylindrical appearance for the ceiling, this truss would need many small pieces of wood framed together. This decorative type of truss adds volume, keeps the room cool and has a relatively low maintenance drywall. It’s often used for cellars and long hallways. 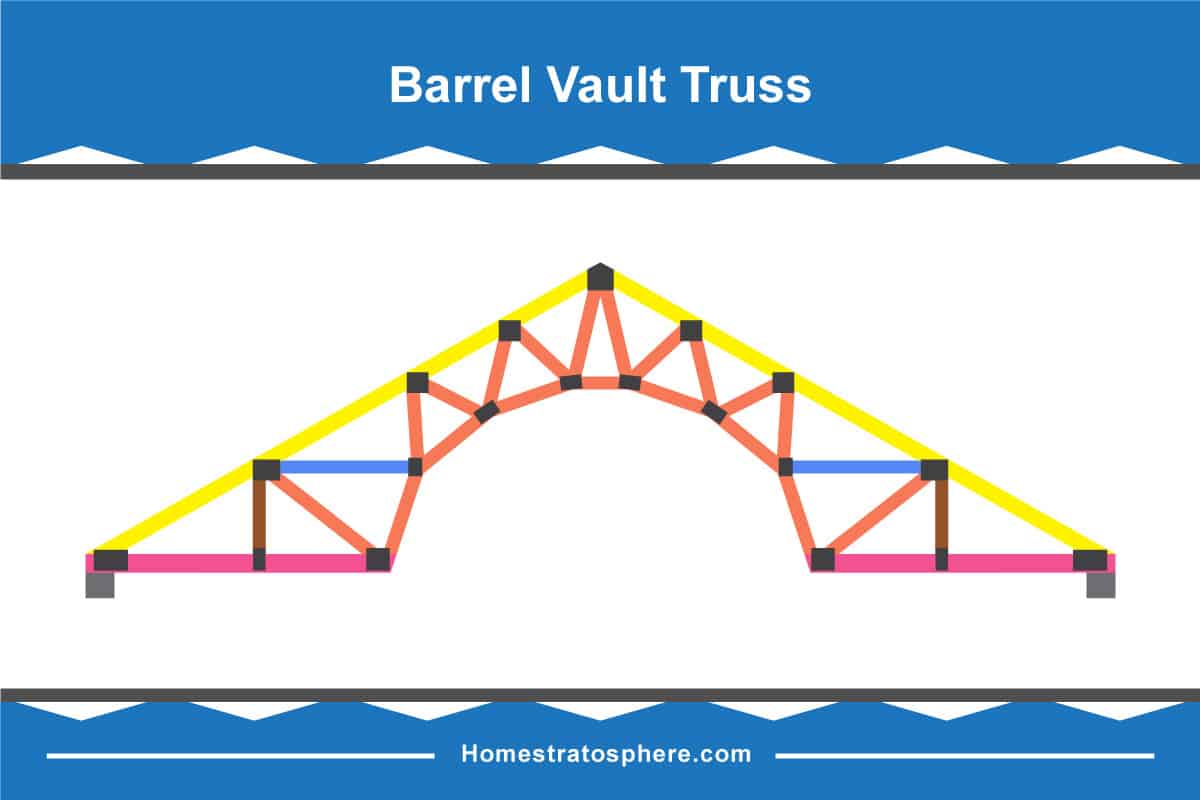 Two horizontal beams that extend beyond the load they’re bearing and are fixed at one end. The double cantilever truss adds height to the structure and contributes to a light and graceful appearance. It’s often used in high-rise buildings such as exposition buildings and grand stands. 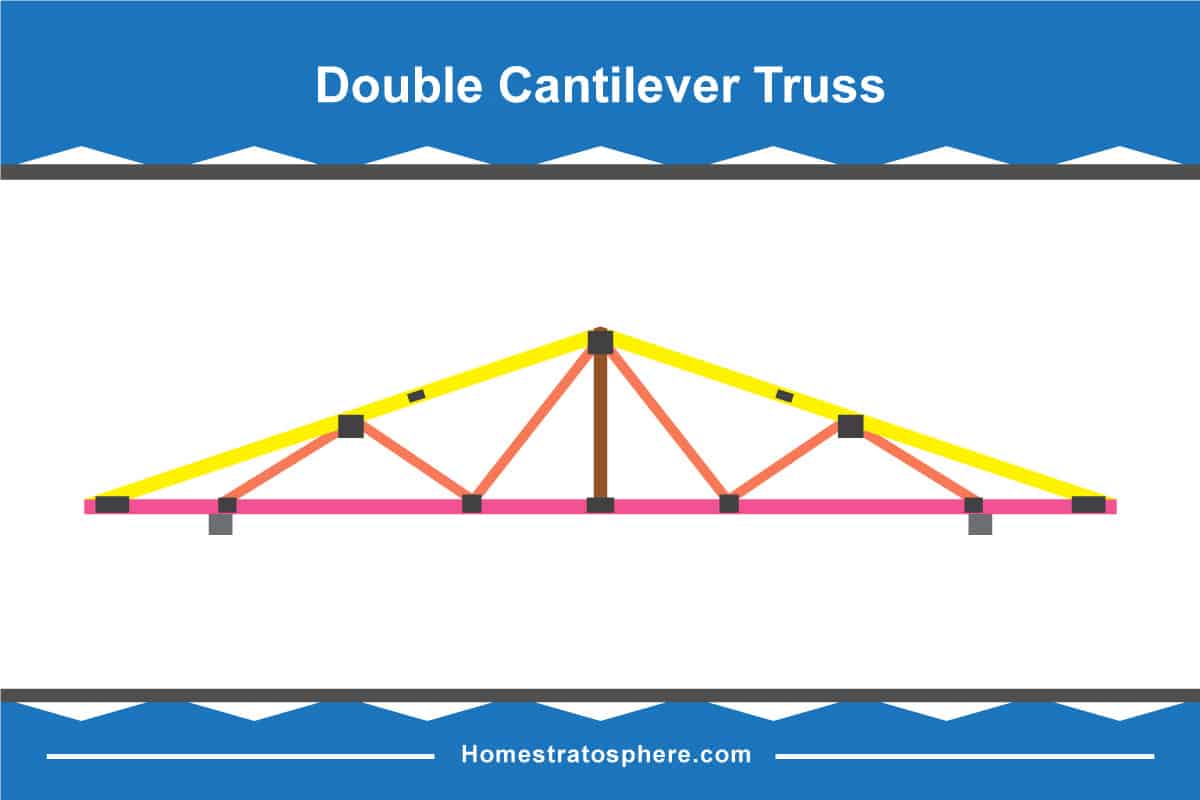 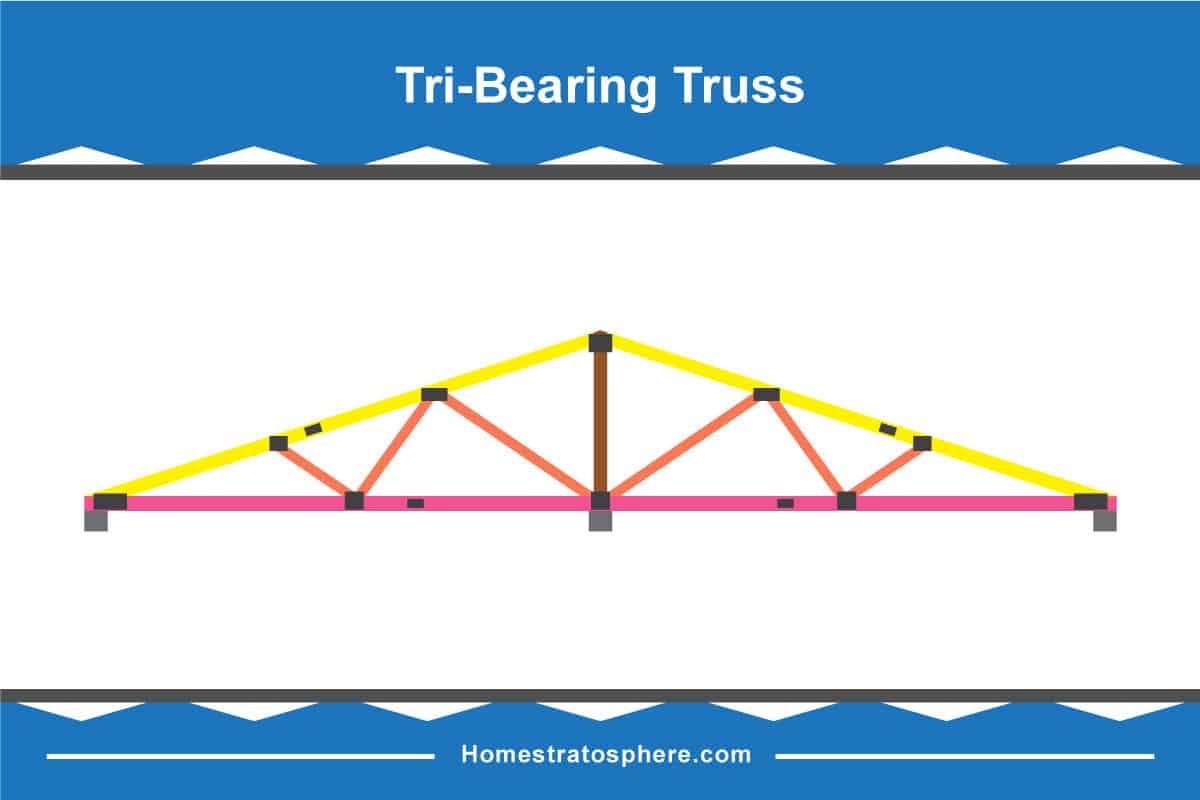 A pitch truss with two sets of different sloping sides. They’re often placed at the front and back of each other with the front pitch usually steeper. This is used for gable roofs. 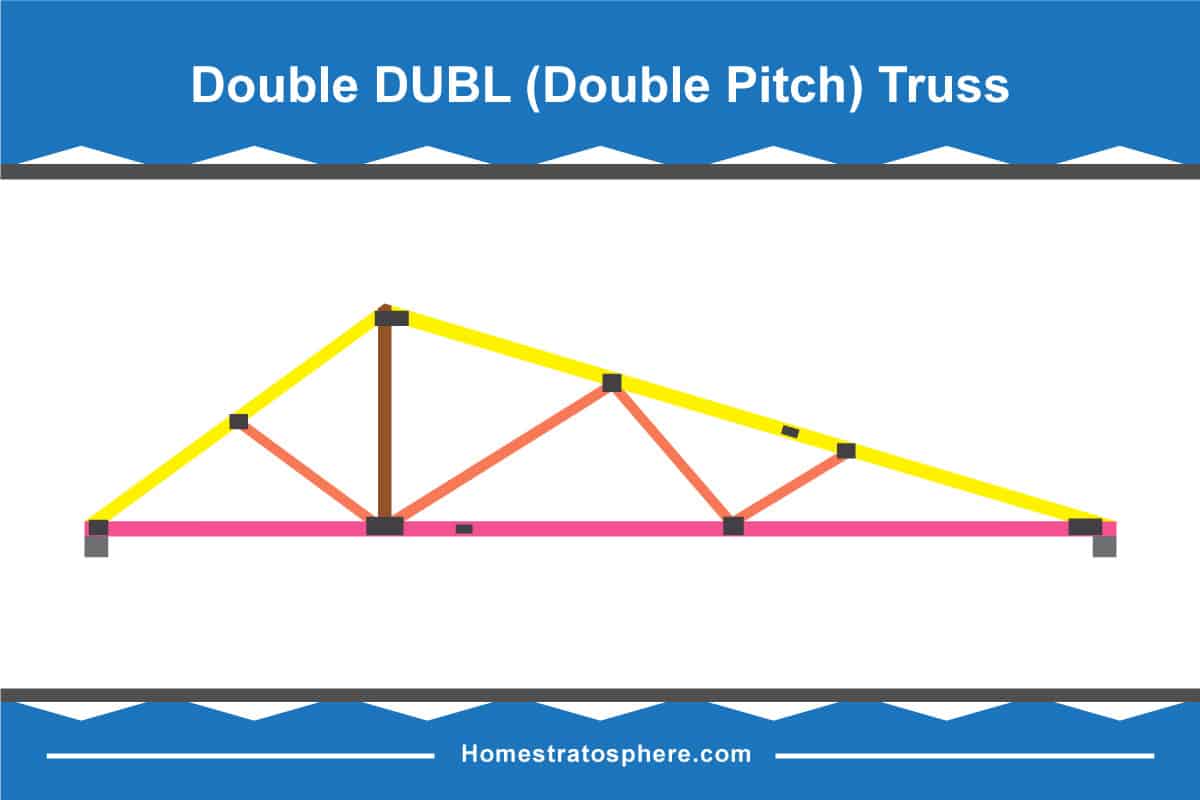 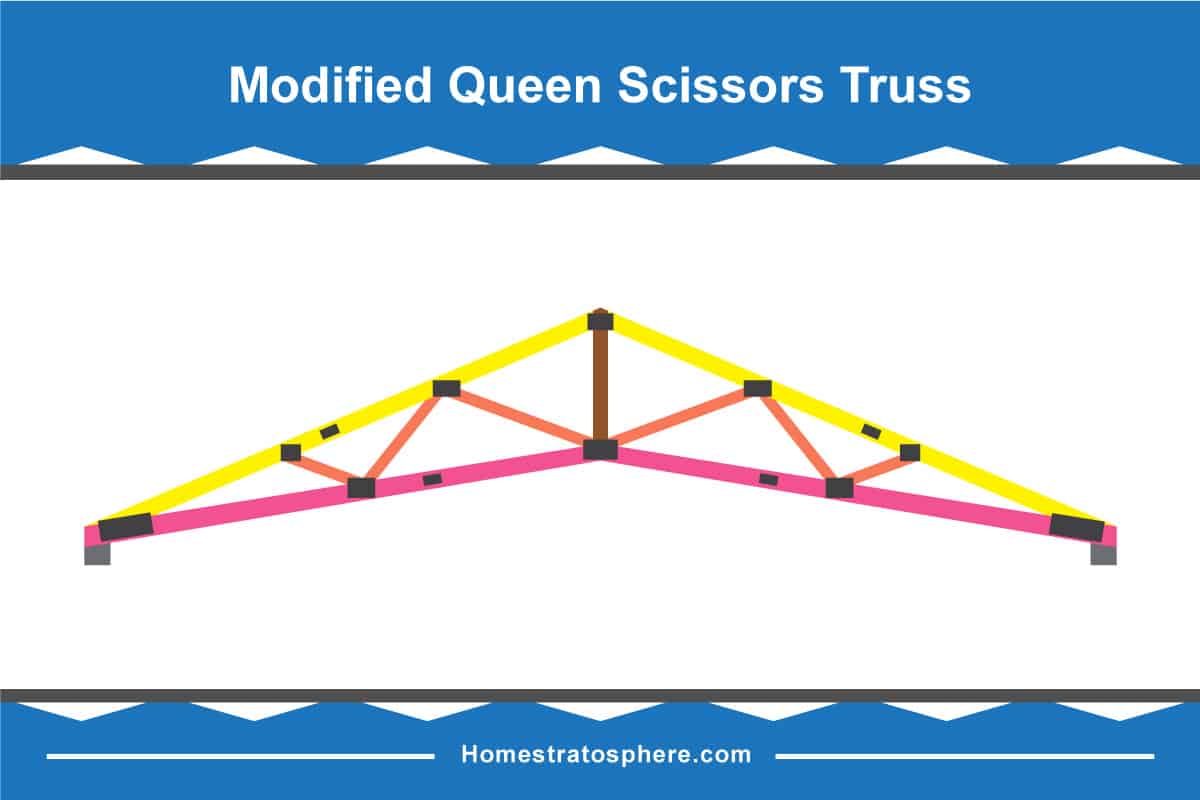 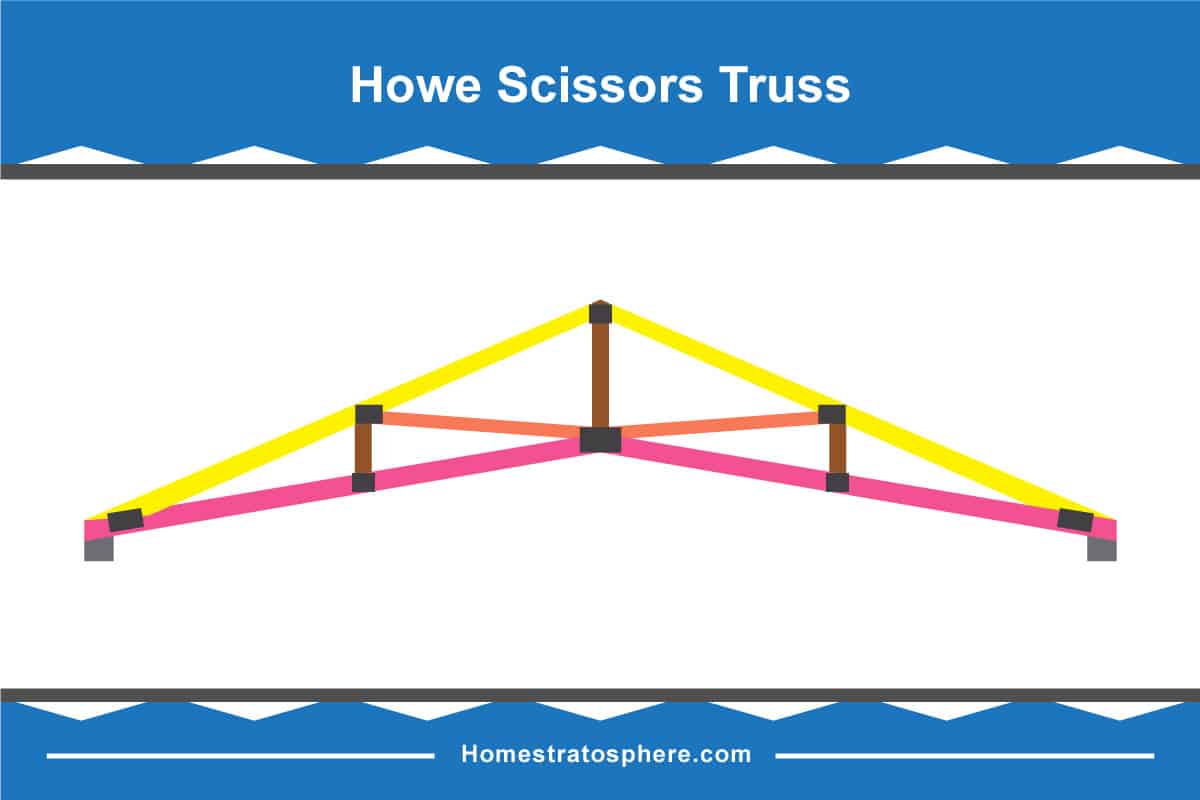 A pitch truss with a truncated or flat apex so that it can support more load. Hip roofs are more stable than gable roofs and more resistant to strong winds and hurricane.

A variant of the hip truss and the most versatile of the types. It has the same slope as the standard trusses but with a flat apex. 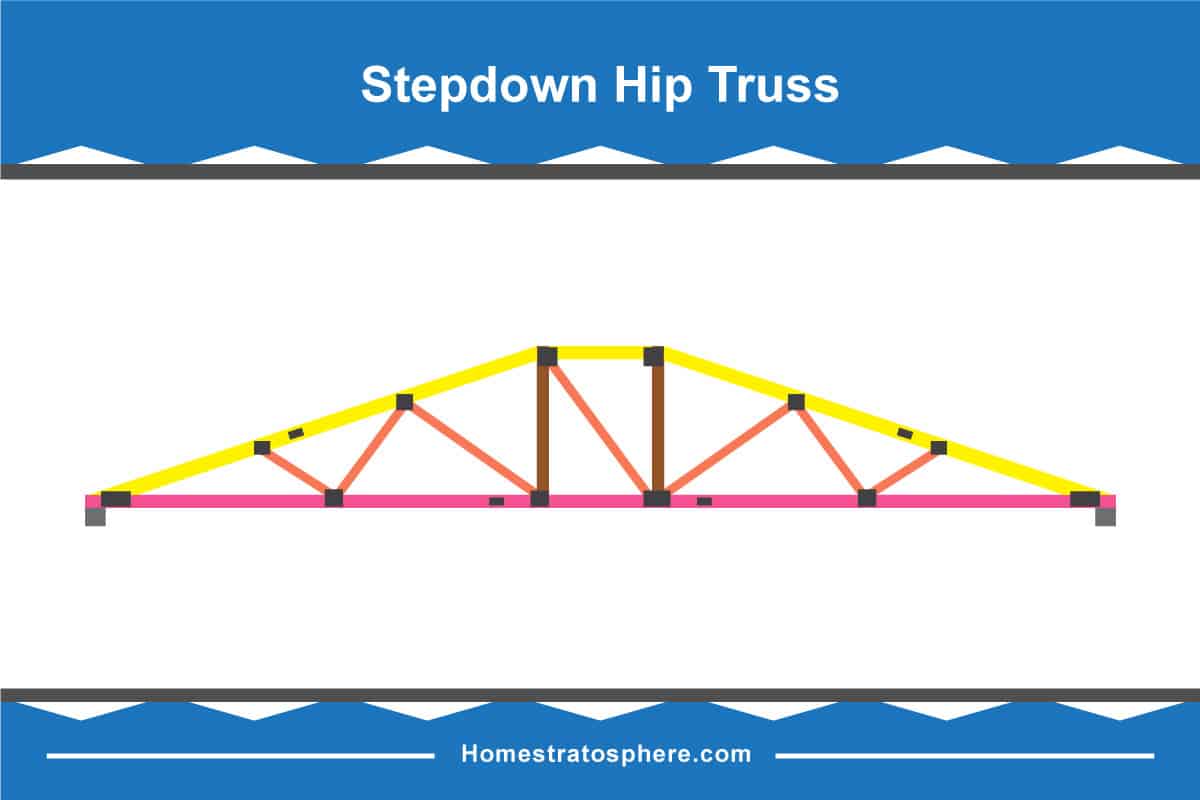 It’s a common truss with its interior space converted into a room. This popular type of pitch truss can be versatile and add value to a property. It’s often used in a garage or drive shed. 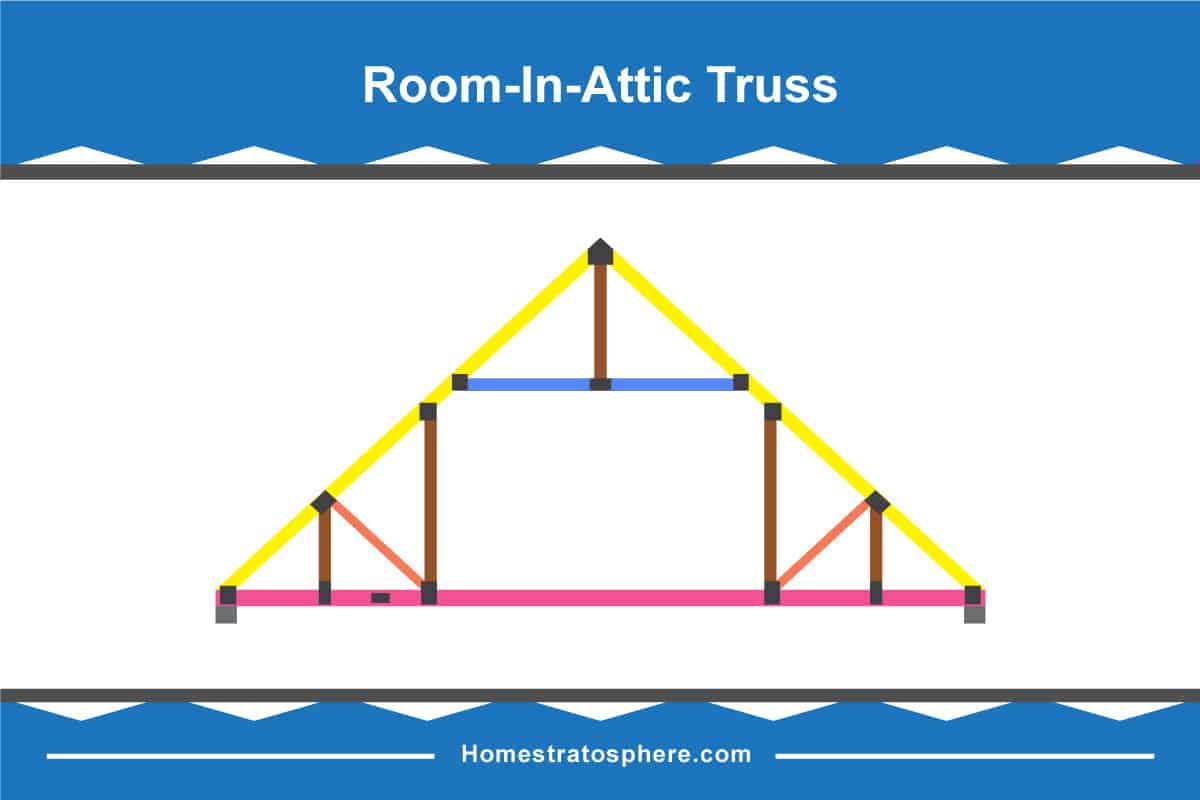 It has a barn-like appearance and similar to the Room-in-the-attic for its usage with a built-in floor system.

Has an increased slope with a double symmetrical pitch top chord. 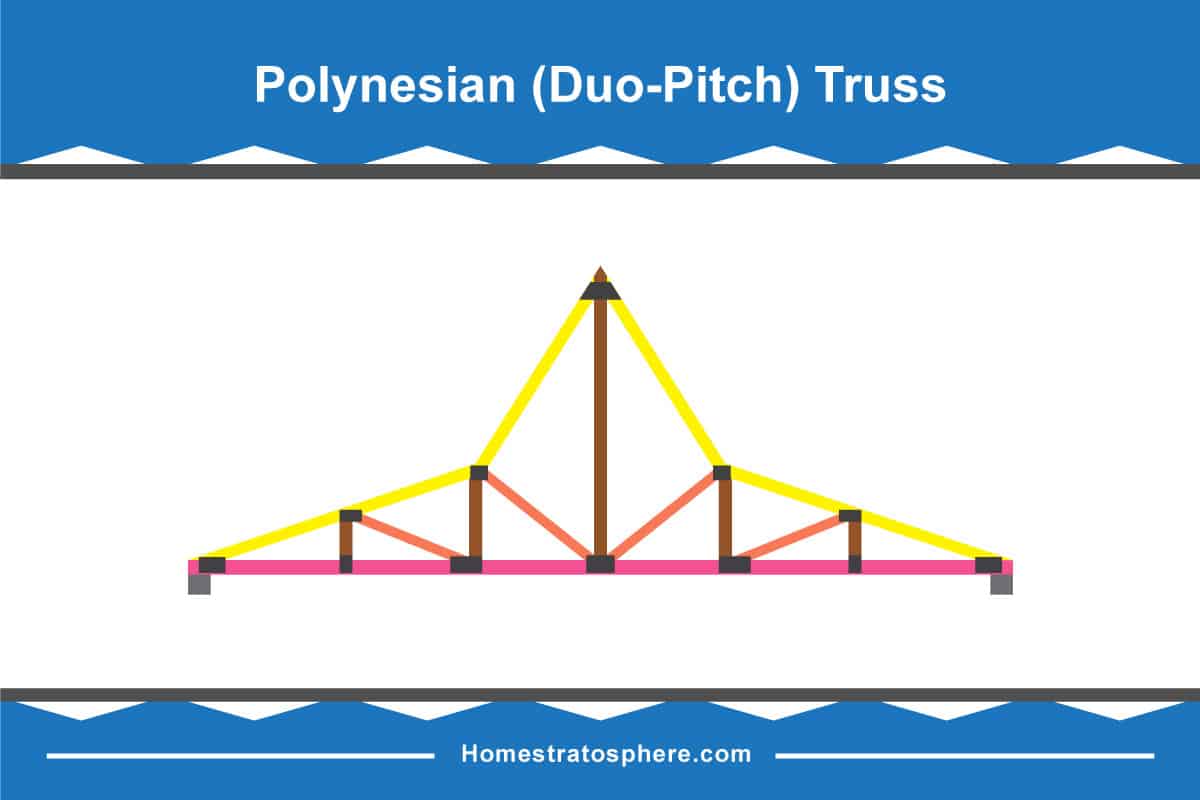 A mono truss is a one-sloped truss that forms a right angle triangle. A mono truss roof allows for more sunlight and visual space, proper drainage and relatively cheaper. It’s often used for sheds, garages or extension of an existing roof. 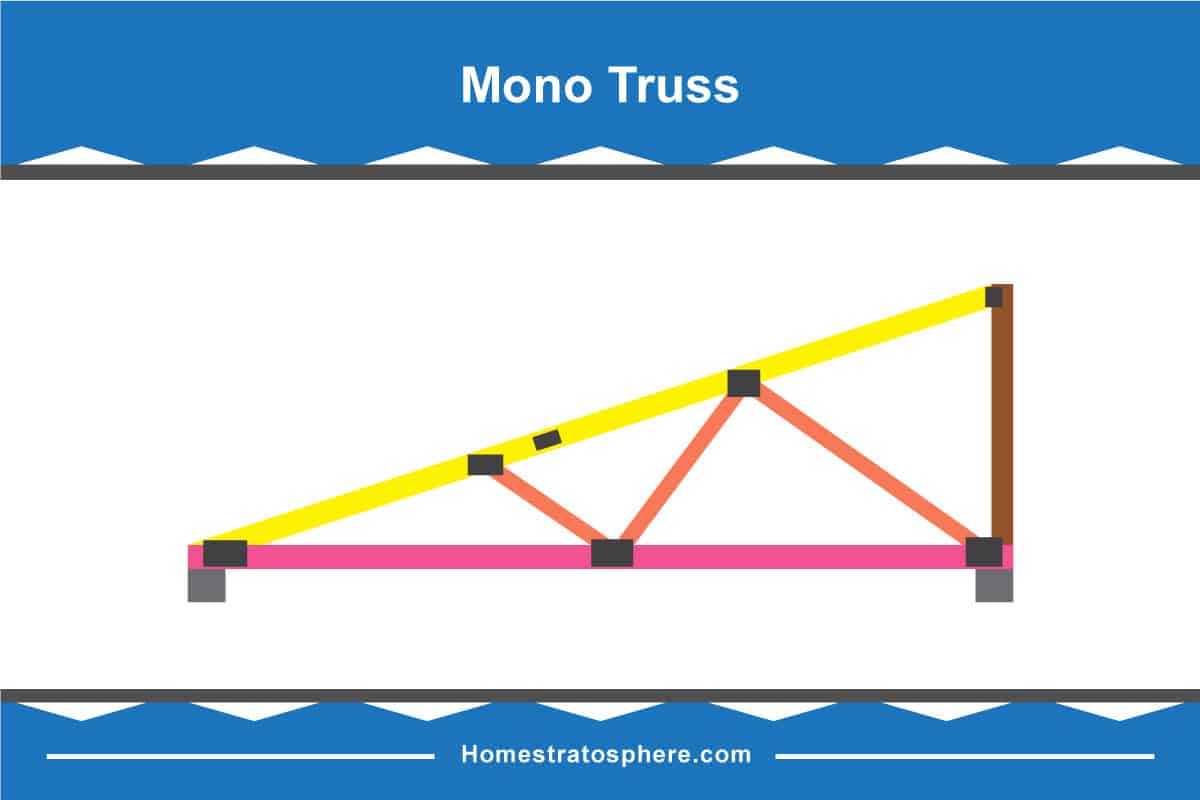 It’s a variation of the Scissors Truss and used in residential as well as commercial and industrial buildings. 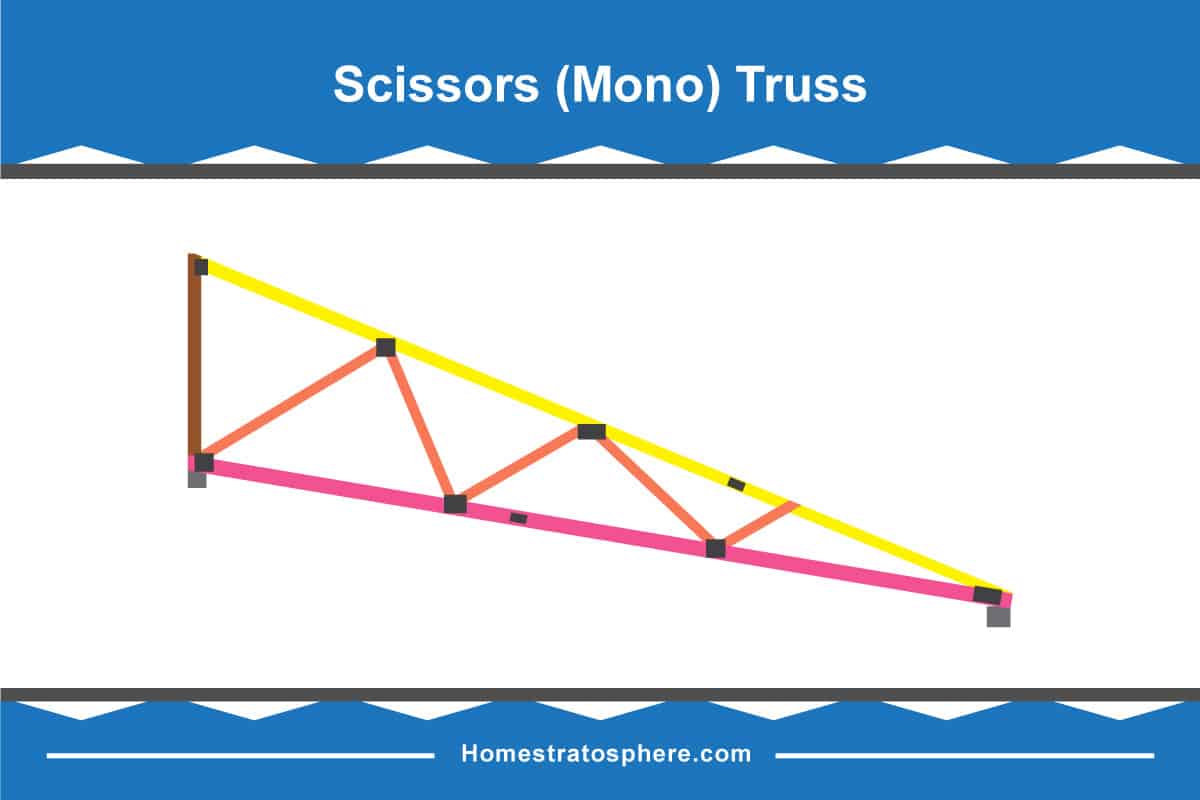 The simplest truss with only one central vertical post, two rafters and a tie beam. It is often used in the shed, porch and garage. 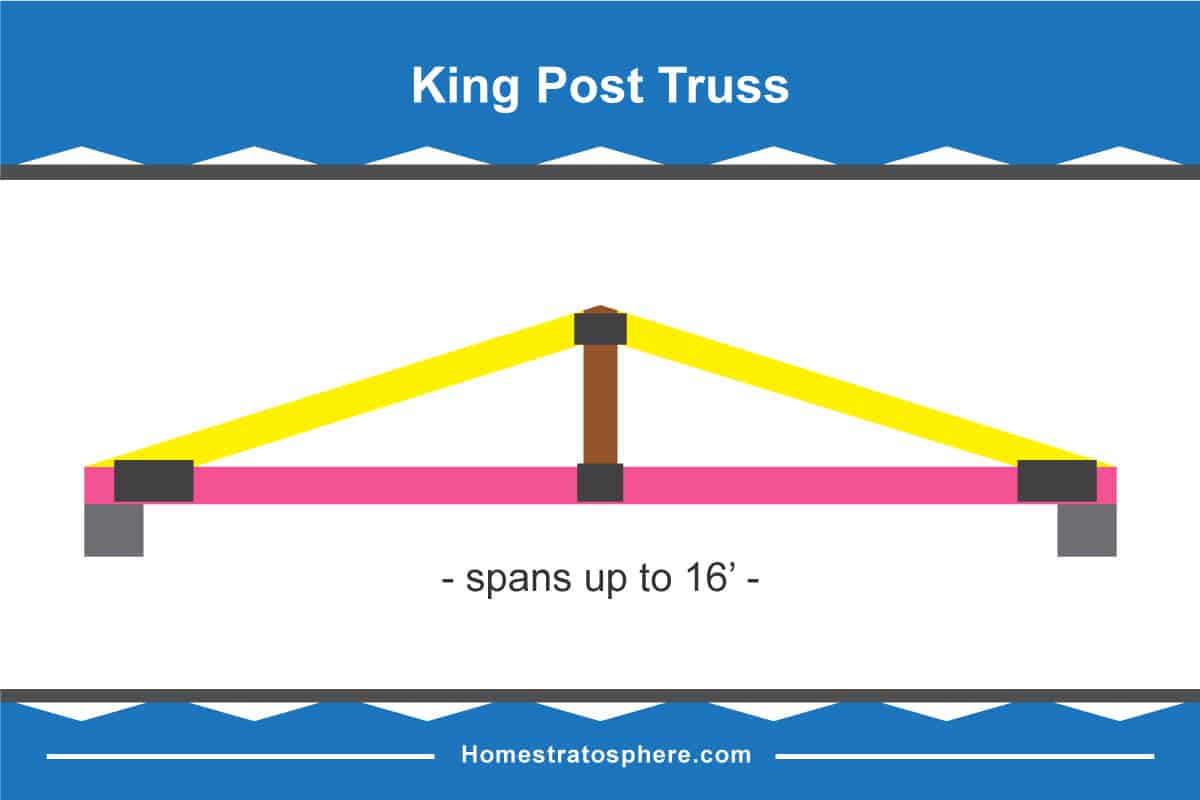 Unlike a King Post, the Queen Post truss has two central vertical posts, two rafters and a beam. It is more lightweight than the King Post and can be used to cover larger areas. 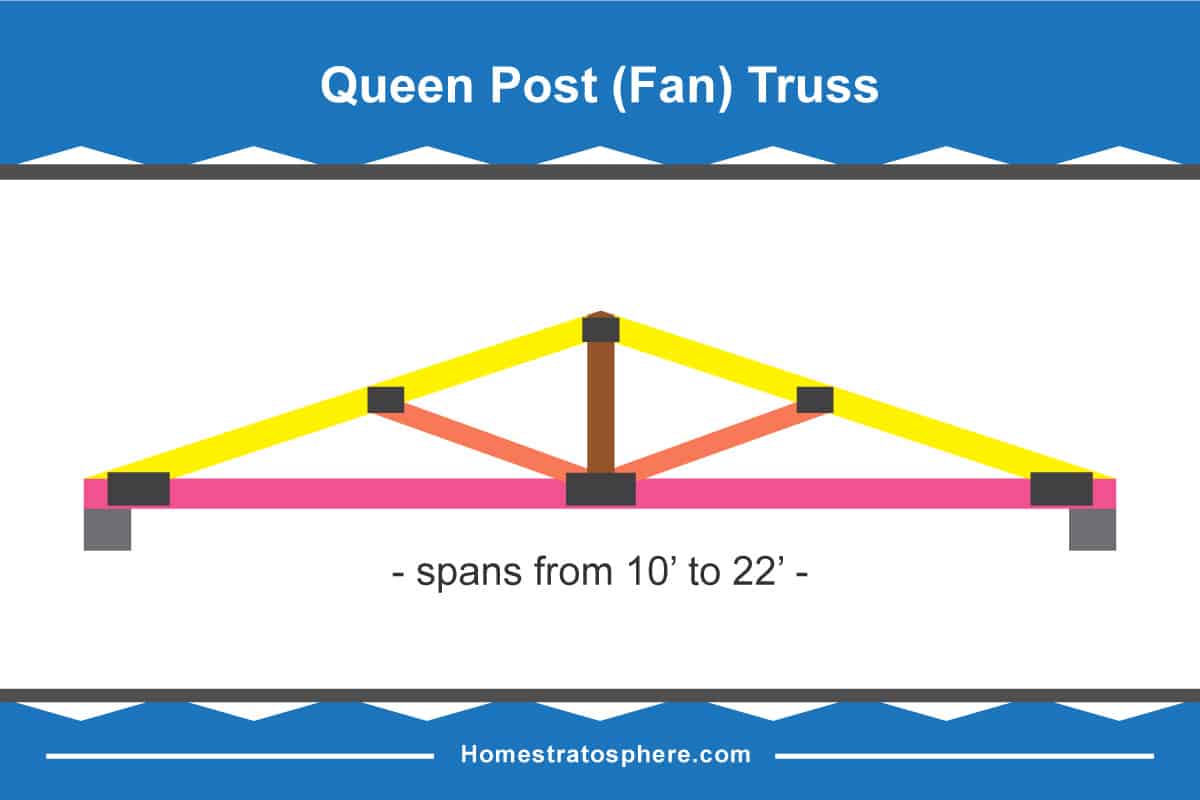 Has a double V web configuration and the most widely used in homes and pedestrian bridges. 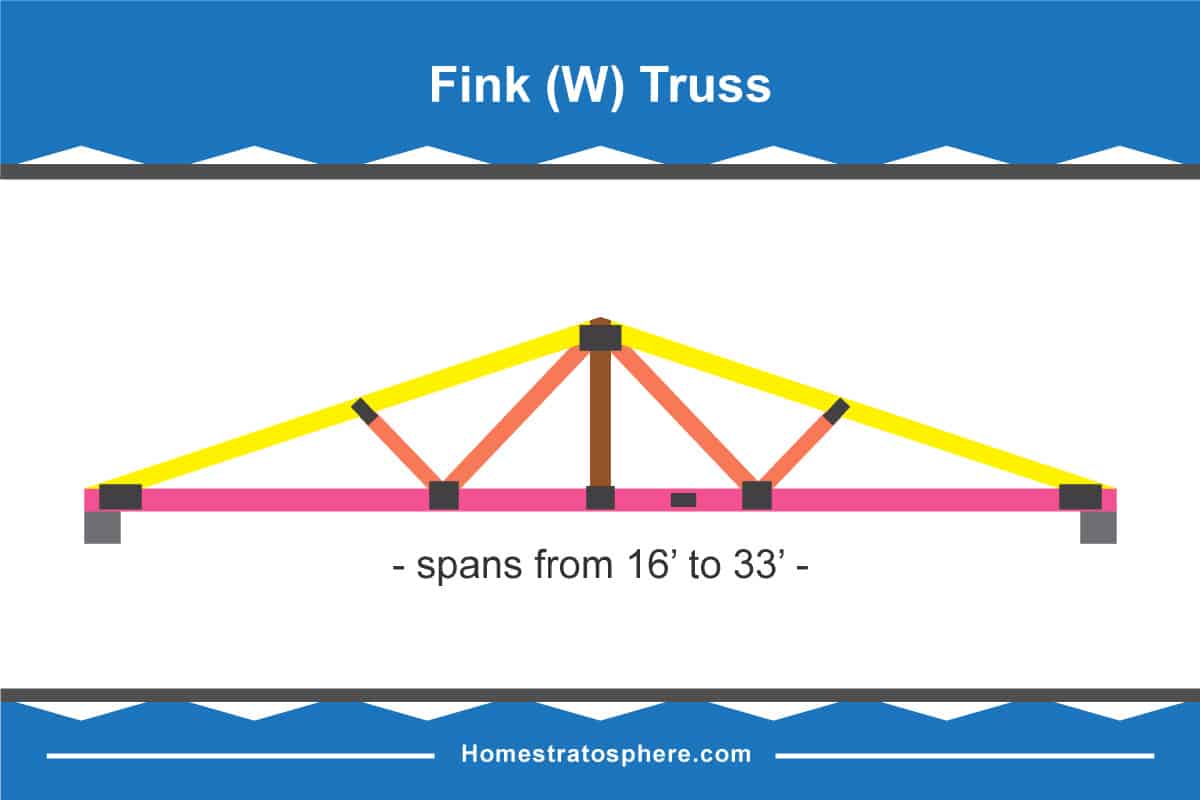 Designed by William Howe in 1840, this common truss with a M web configuration used to be very popular for construction of modern railroad bridges. 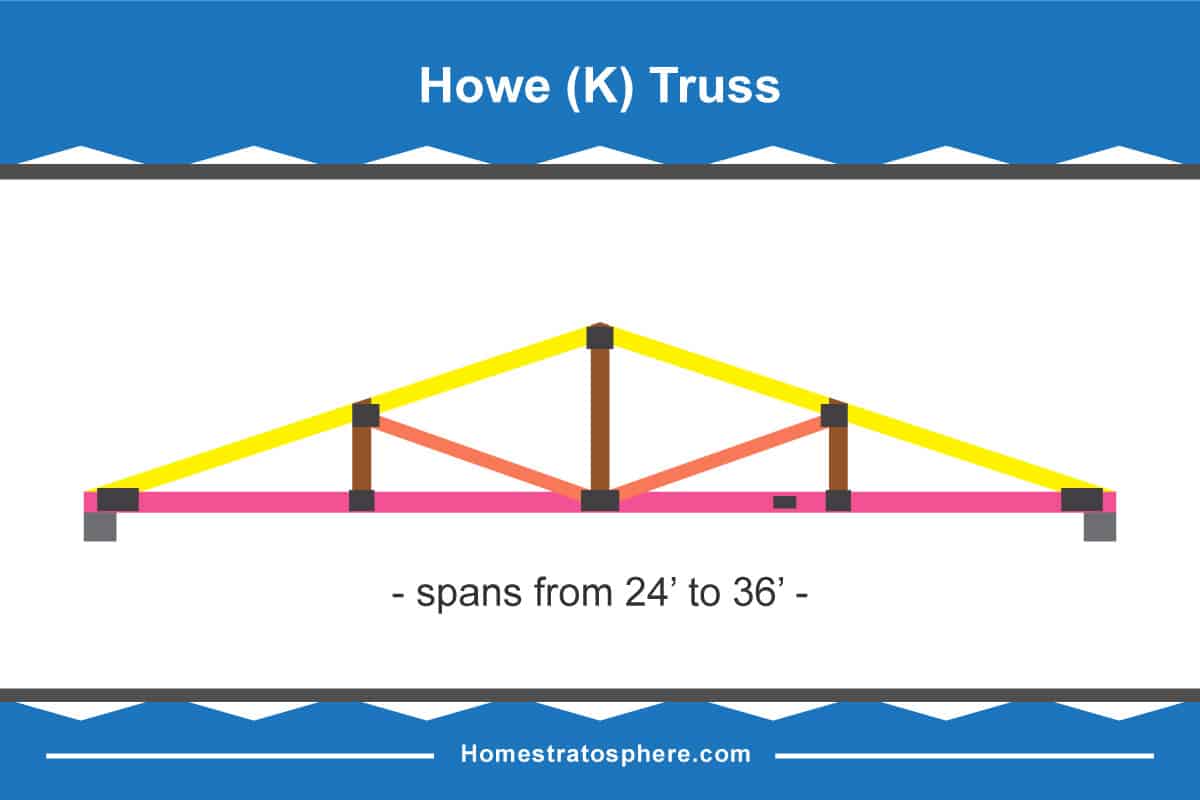 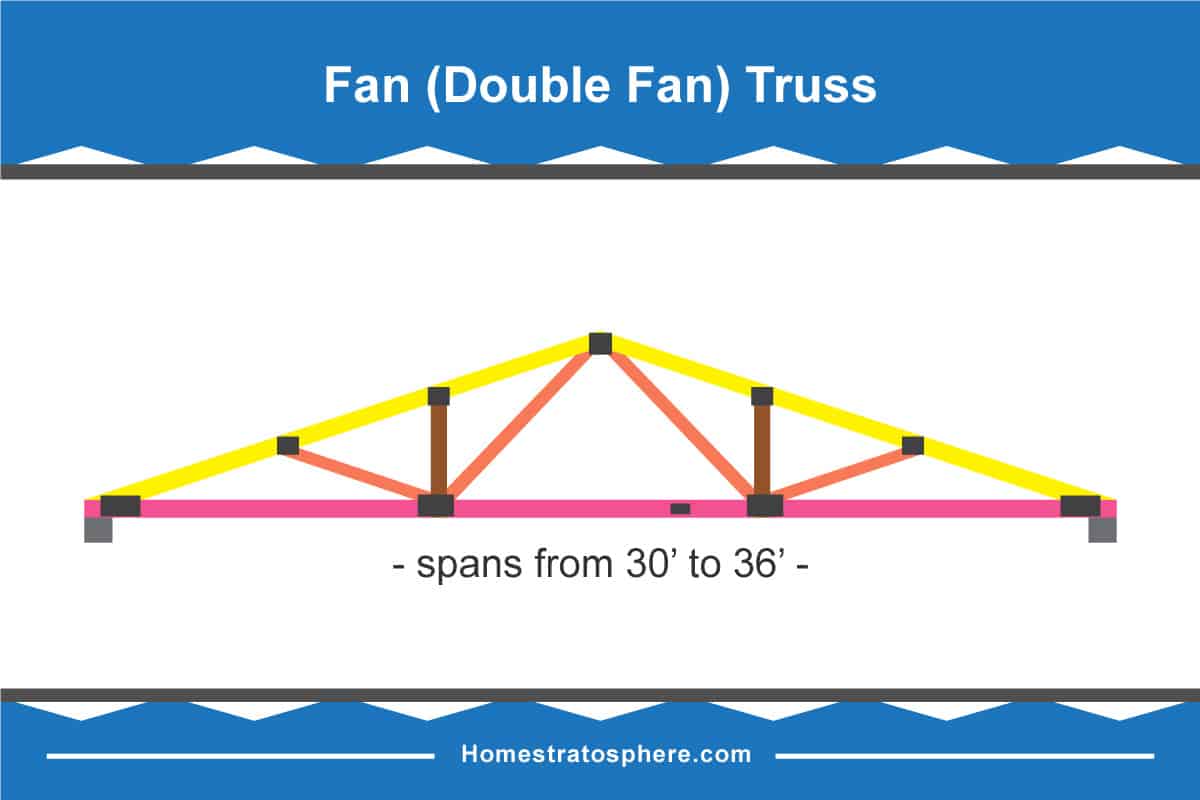 It’s essentially the same Queen Post truss but with multiple panels on both sides. 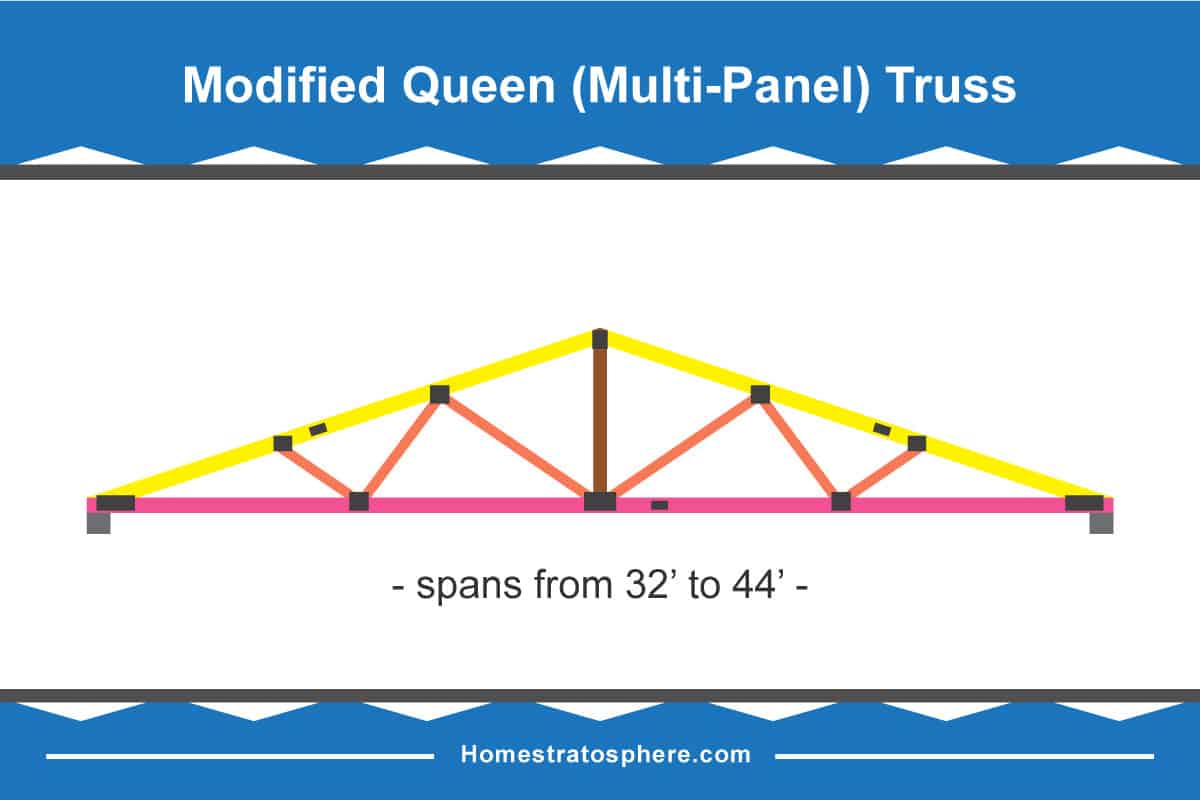 It’s the Fink truss with the same pattern repeated on both sides so that the web configuration looks like W instead of double V. 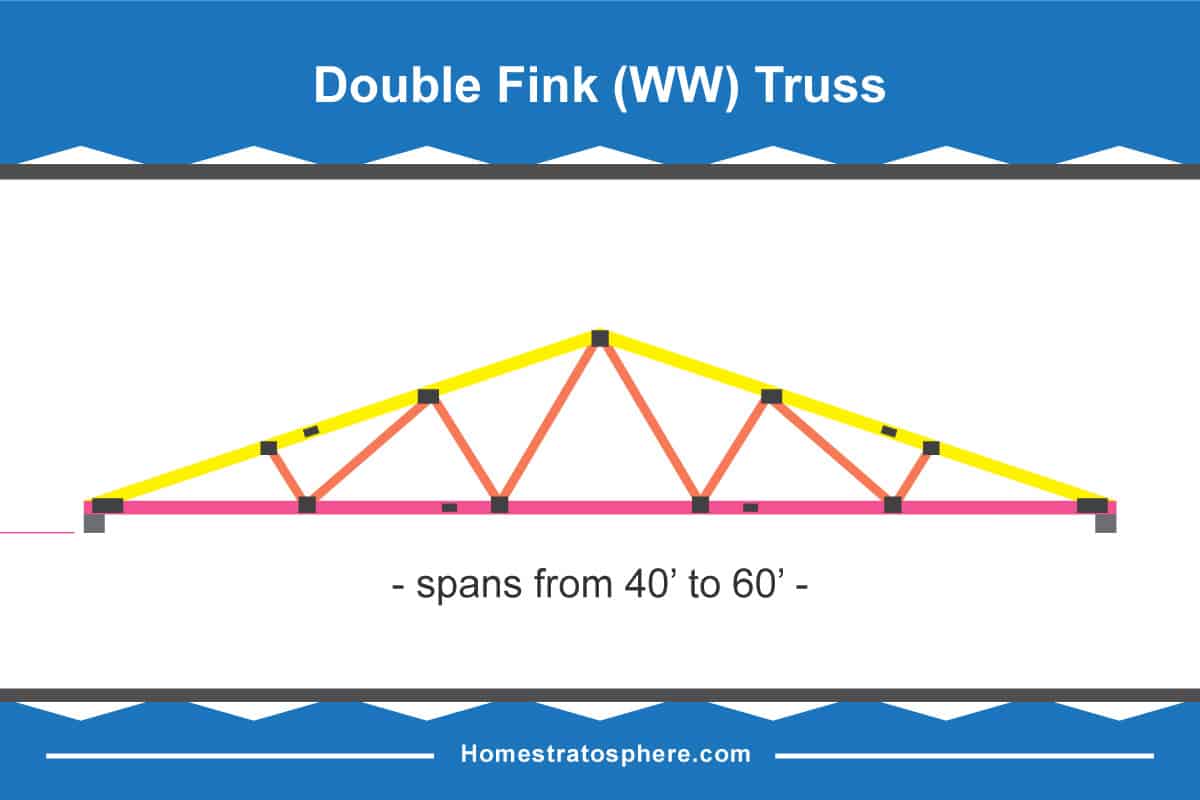 It’s the Howe truss web configuration with an extra pair of vertical post and diagonal on both sides. 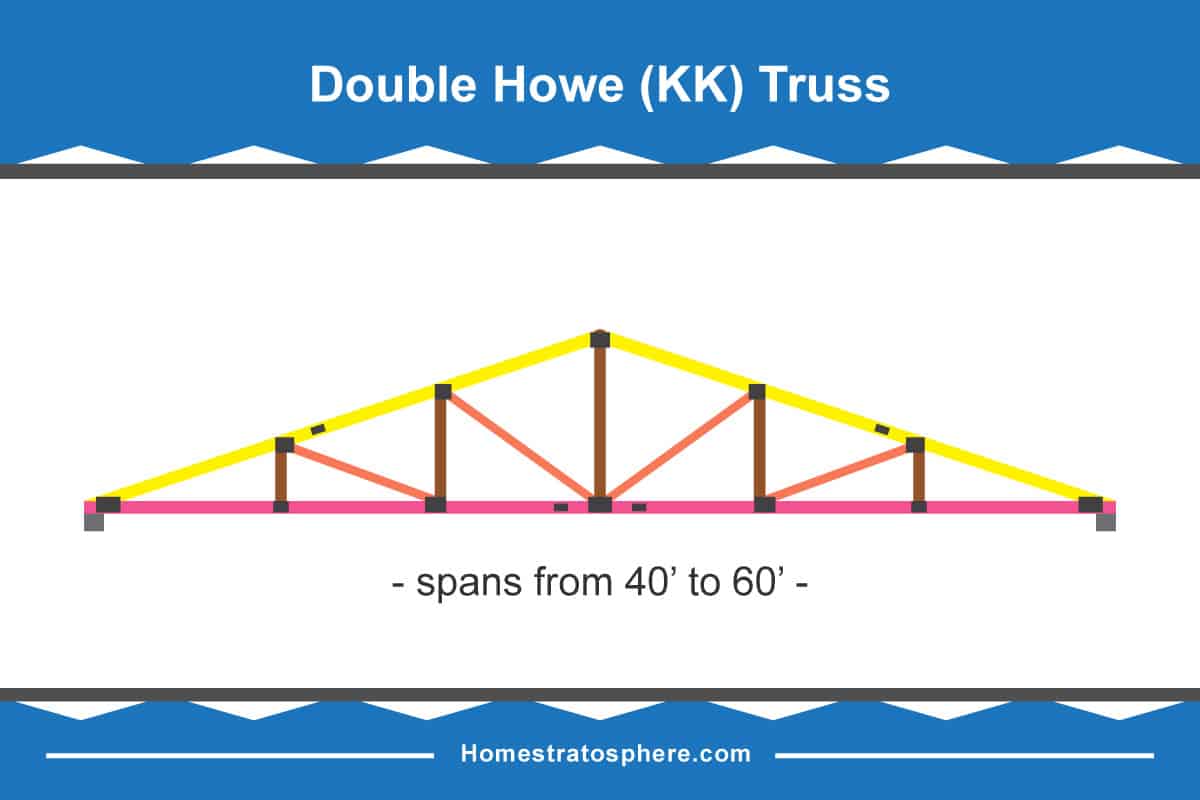 It’s the Double Fan truss with a central vertical post and an extra pair of the upright and diagonal. 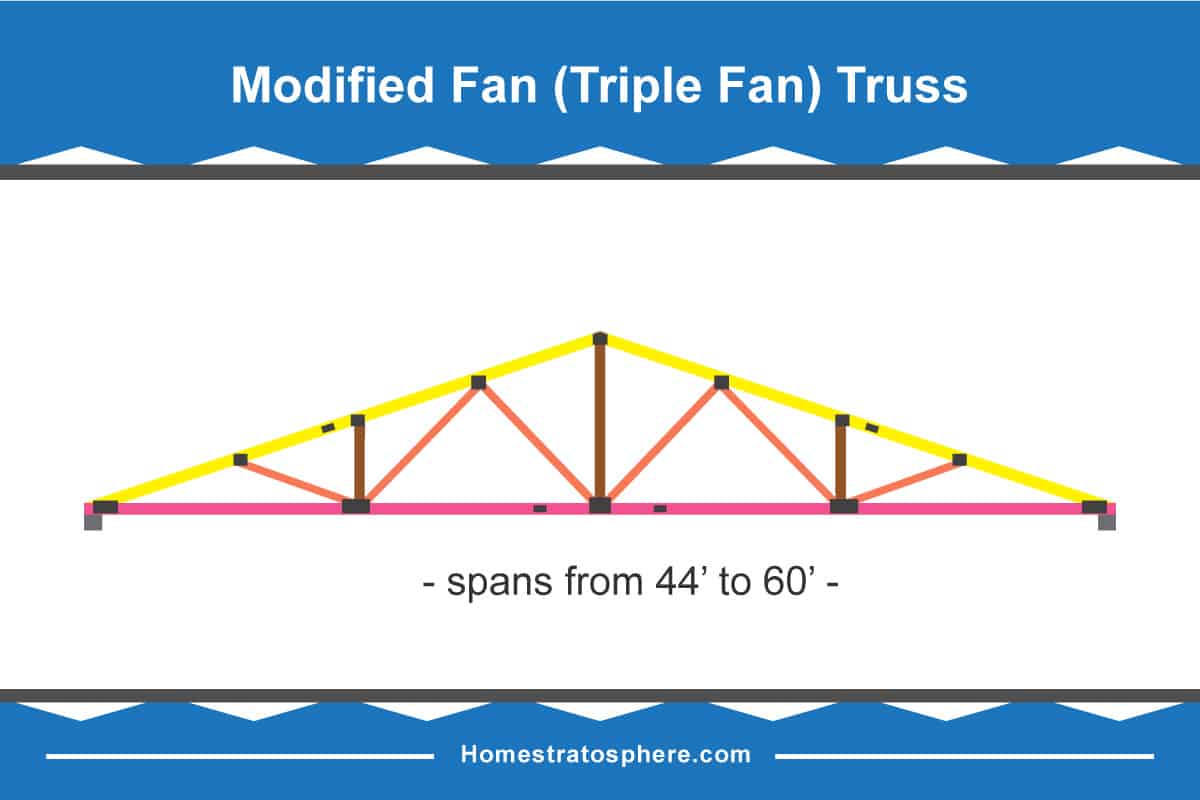 It’s the Fink truss with the same pattern repeated three times on both sides sot that the web configuration looks like three Vs. 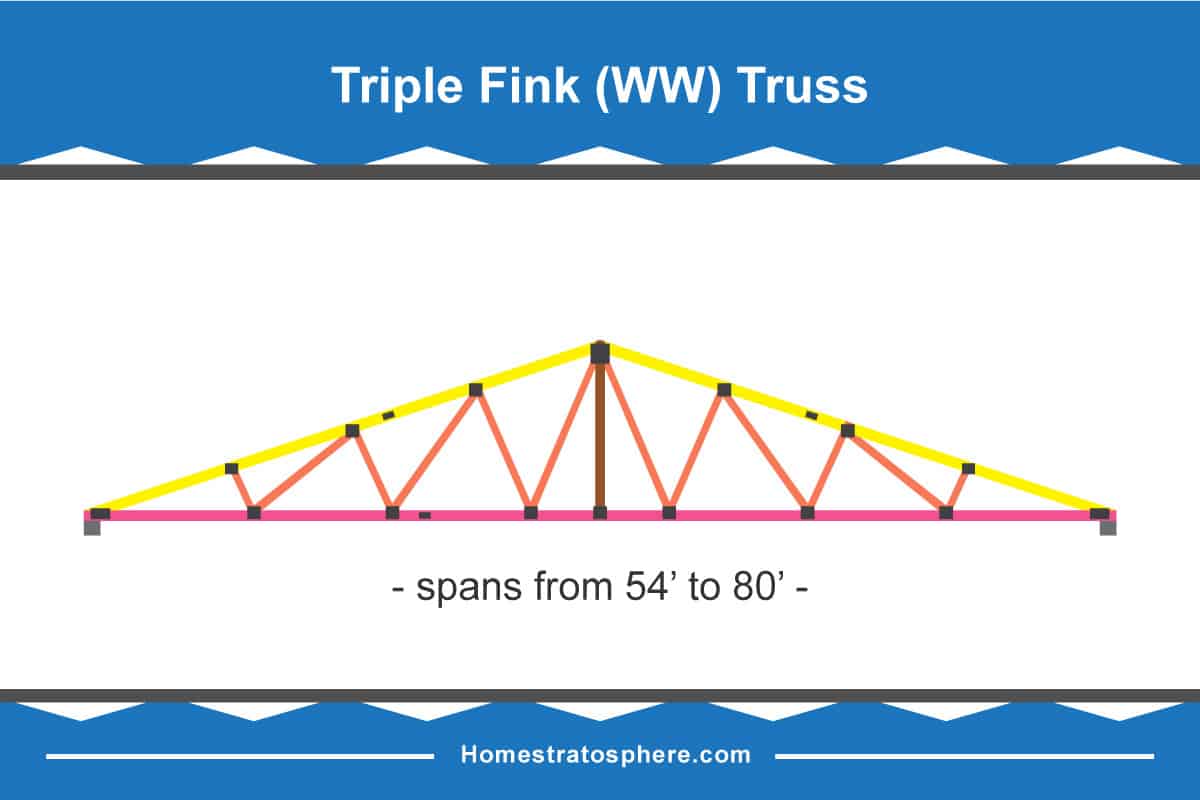 It’s the Howe truss web configuration with two extra pairs of vertical post and diagonal on both sides. 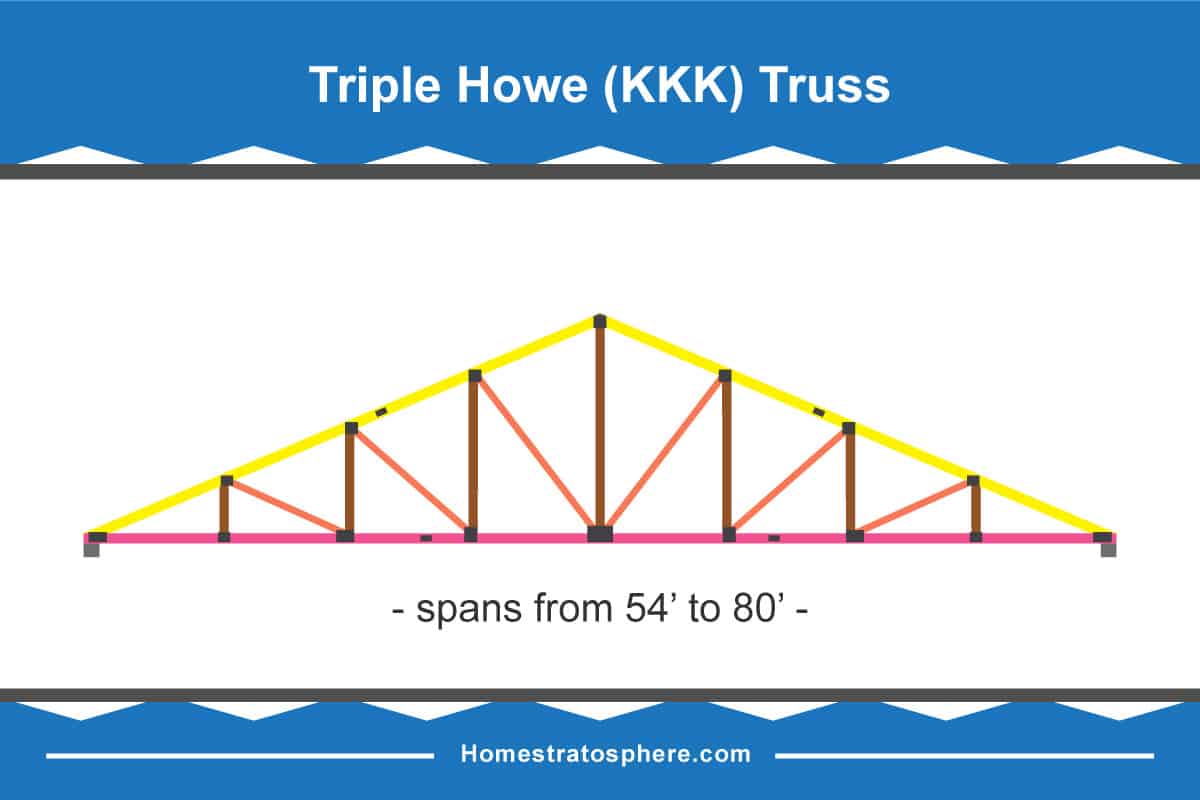 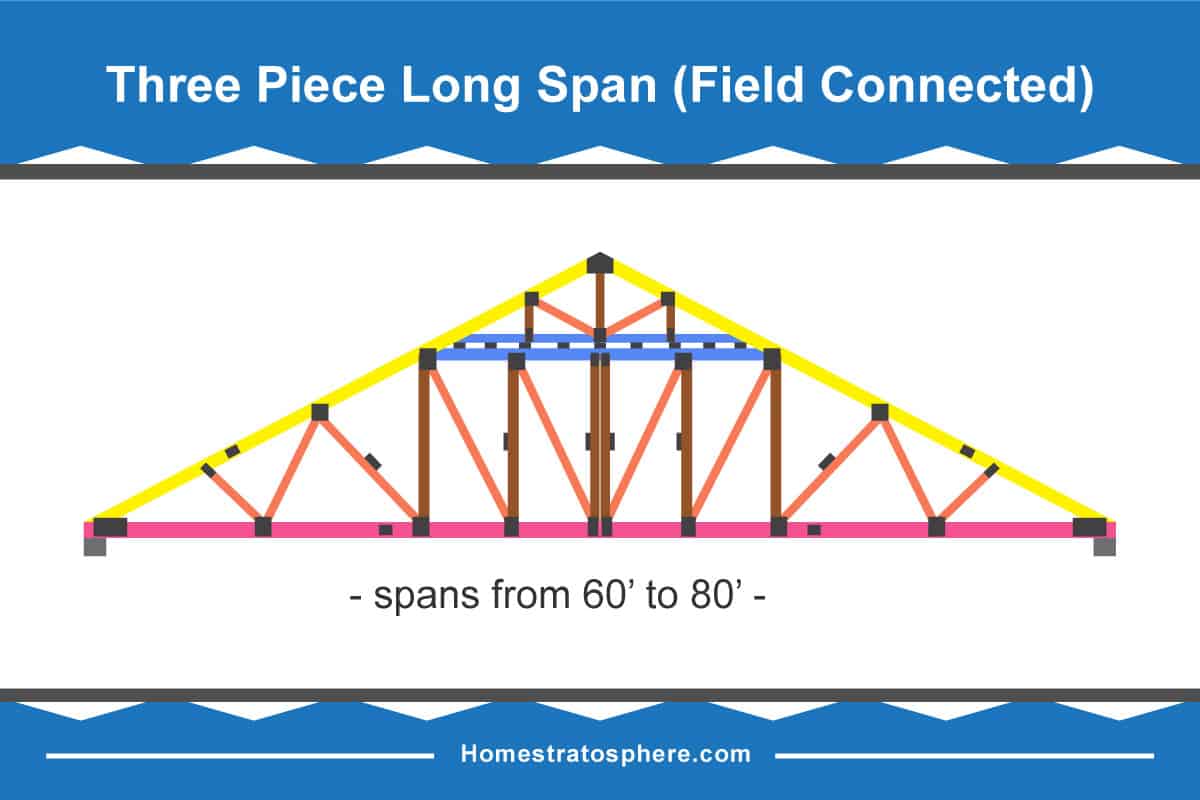 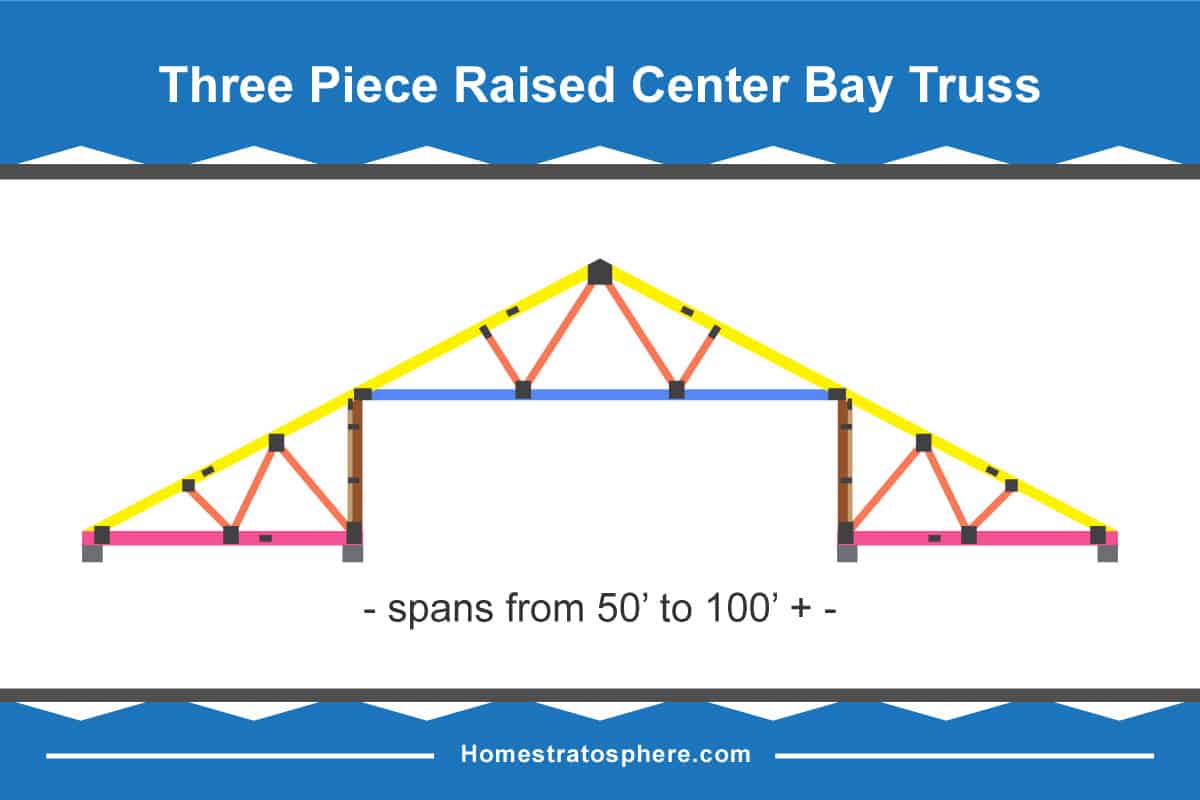