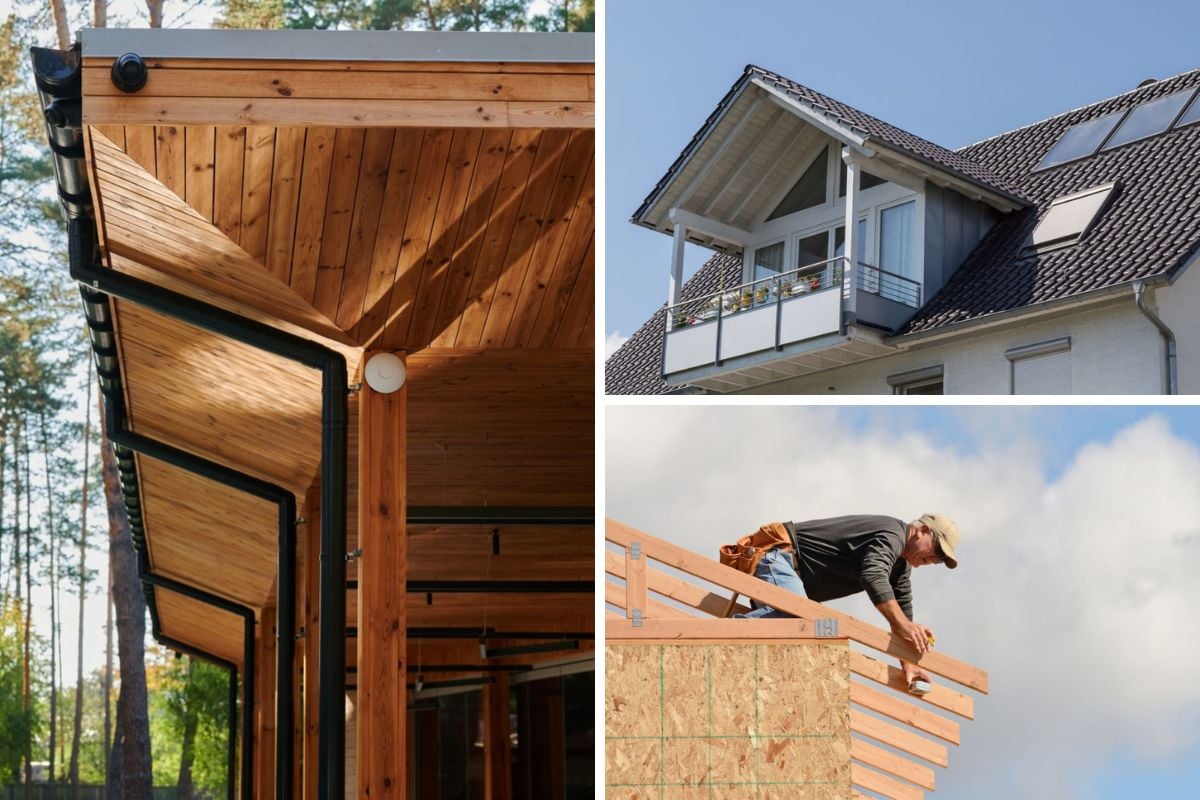 I never gave much thought to roof overhangs until recently. I live in a conventional brownstone in the middle of a major city. My place, and those around me, are beautifully designed but there are not many examples of overhangs.

A friend from college recently got married, and he and his bride moved into a house in the suburbs of my city. It is a rather upscale neighborhood with older and elaborately designed houses. The roof overhangs were especially noteworthy.

I am a writer by profession, and whenever I take an interest in something I feel compelled to learn as much as I can about it. The following is a summary of everything I could find out about roof overhangs.

Related: Parts of a Roof | Homes with Gambrel Roofs | Hip Roof Types & Styles | What is a Gambrel Roof | Can You Paint Roof Shingles | How Long Do Roofs Last

What is a Roof Overhang? 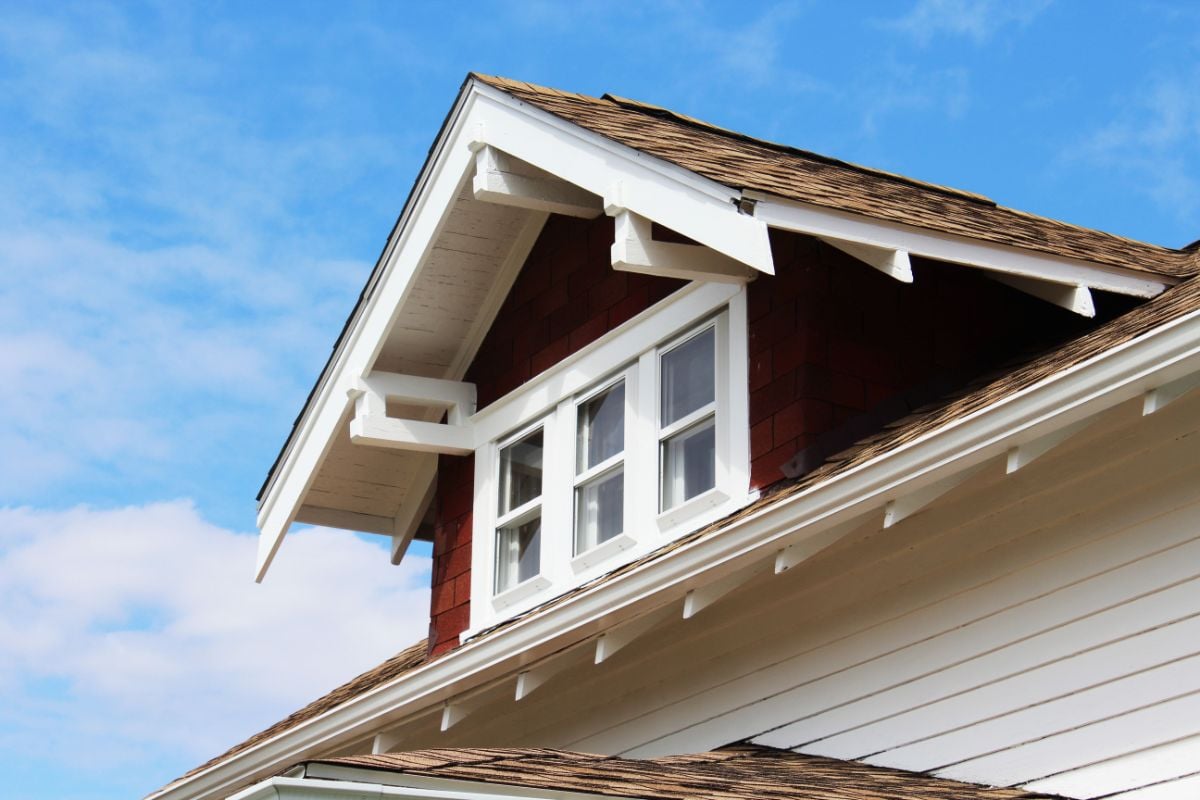 A roof overhang consists of the extent to which a roof extends beyond the outside wall of a house. An overhang is also known as an eave and the underside is a soffit.

The structure is not there merely for show. It is designed to protect the exterior of a house from strong winds and rain. It also keeps rain, snow, and ice from getting behind the siding.

Failure to protect these structures can cause rot and erosion in them. Roof overhangs also shade some of the hot sun from windows to prevent glare and keep extra heat out.

Houses located in areas that are exceptionally hot and rainy, such as in tropical climates, have more extended overhangs to protect them against the excessive moisture. Most such overhangs are no longer than 2 feet. Any overhang longer than this requires a reinforcement of the soffit.

In addition to protection against weather, roof overhangs are also designed to complement the architectural style of a house. 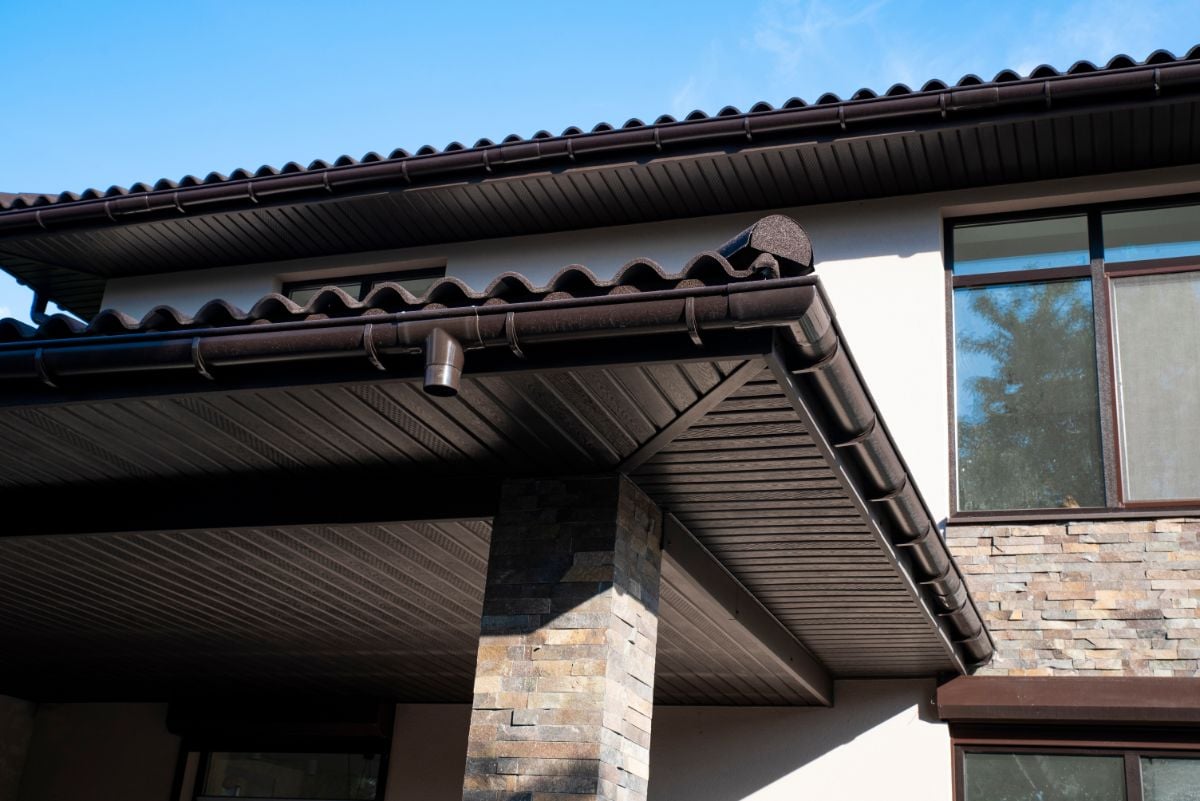 These are some of the most popular types of roof overhangs. The list is not exhaustive, but it is a good roundup of what you will find on most houses.

These types of overhangs are typically sloped. This allows water to fall away from the shed. Many homeowners like this set-up because it gives them a space right outside their homes to stack firewood. A shed overhang is also effective in preventing your porch from getting wet.

This type of overhang has several eaves that slant down on all sides and angles. Hip overhangs follow the design of the roof line, and they tend to enhance the look of the home.

Indeed, hip overhangs are the most common overhangs. They withstand wind and rain well, and they also protect homes and buildings against water runoff. 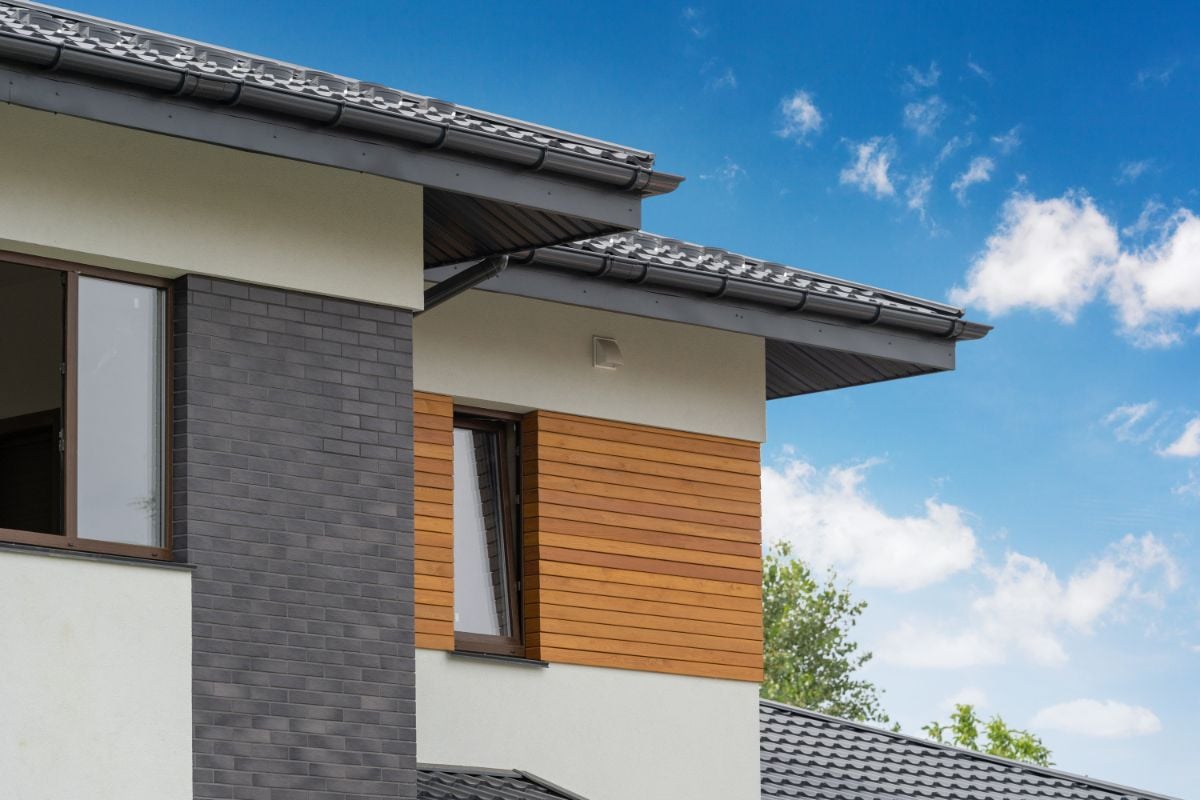 Flat overhangs are best suited for two-level homes, as they provide clear views from second-level windows. This type of roof overhang needs to have an angle from the wall of the house to the overhang in order to divert water from the latter.

The gable overhang has a triangular shape that protrudes from the eave. It is easily adjusted to the exterior lines of any home. The tall angle of this type of overhang makes it an effective diverter of rain and melted snow. The overhang itself is commonly seen over entryways and front porches.

This type of overhang is typically added to a home to protect the deck or patio. An awning is not attached to the actual roof of a home, which means it can be removed at any time.

Awning overhangs are also used to give some protection to people whose windows face a southern direction and are therefore exposed to extreme heat. When used over a doorway or entrance, they provide some protection against weather for those entering or leaving a home. 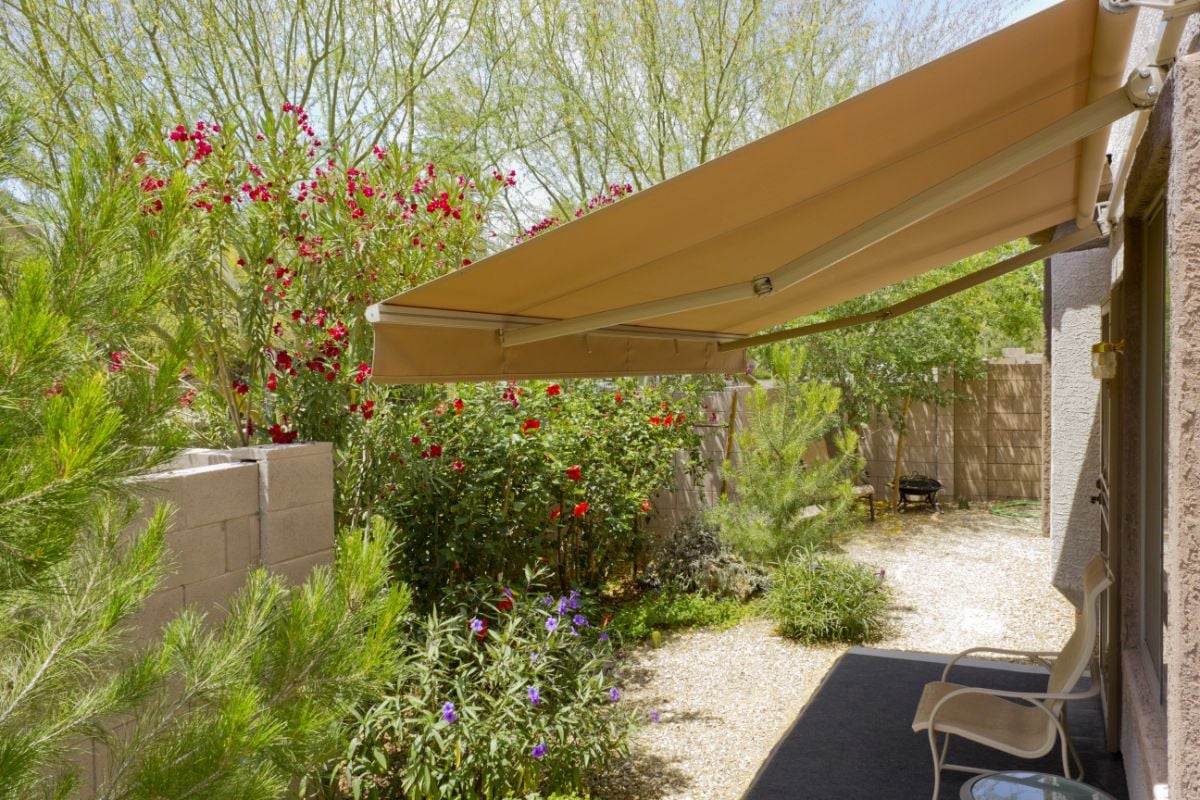 This type of overhang is, like the one above, added to a home to protect a deck or patio from the sun. They tend to be mounted directly to the exterior wall of a home. The distinguishing feature of this type of awning overhang is its motorized crank, which makes it possible to extend and retract the awning.

In the event of prolonged inclement weather, the awning can be extended completely for a high degree of coverage.

The Juliet awning overhang is not mechanical. It is made from metal, copper, aluminium, or steel and comes in a variety of colors. The awning has a straight top line and deep concave sides with sections of metal that run vertically.

This type of awning overhang can provide a beautiful finish to a home entryway. It can also be used to cover windows so that inhabitants are protected from weather and sun. 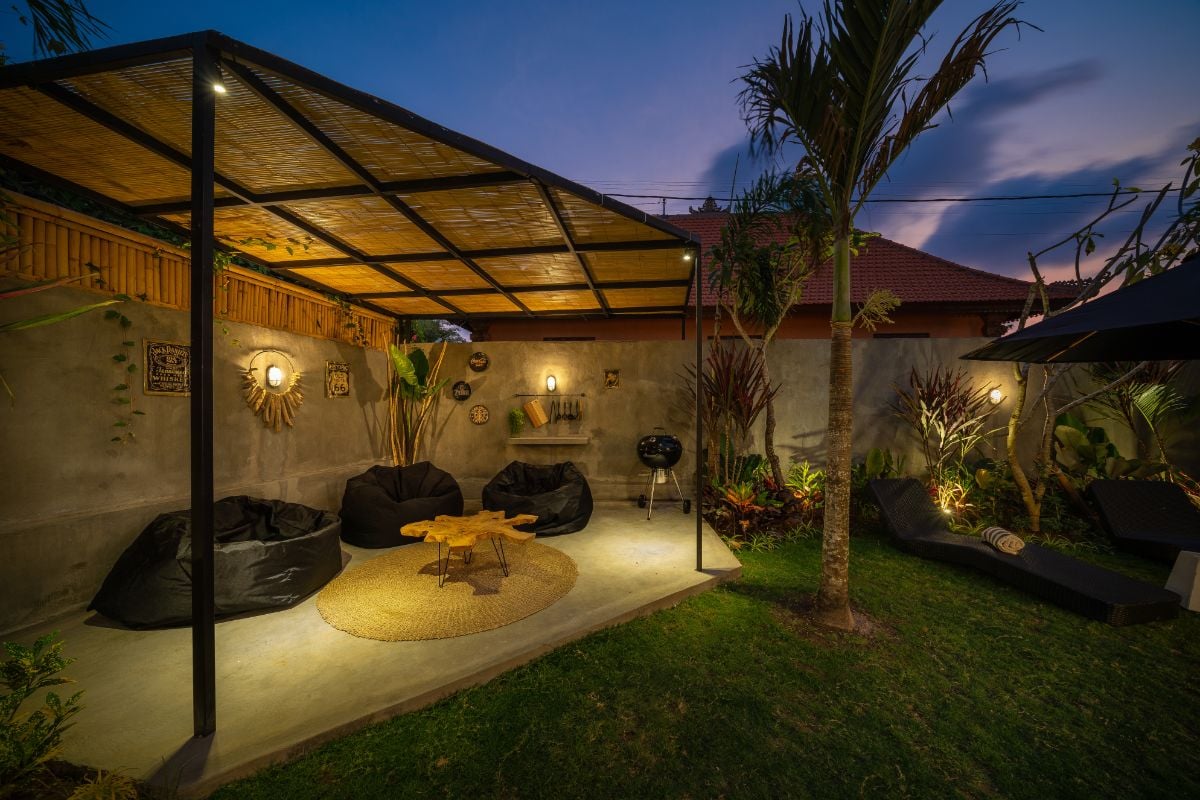 The canopy overhang is used for entry doors when space is limited. It has a steep arch and is connected to the home’s exterior wall. The overhang is best placed in a home’s backyard or patio area.

It consists of a large frame and posts that hold up a large and sturdy covering sheet, which can provide a seating area. Canopy overhangs can be purchased in styles and colors that match the décor and architectural lines of your home.

This structure protects you from bugs and other unwanted critters. At the same time, it offers fresh air and breezes to flow in. The structure can be installed in the back or front yard of the home.

These are often seen in gardens. It is made from beams and rafters that create a grid pattern. The latter has a short overhang of beams and an open top. Pergolas are supported by columns made of wood or masonry.

A pergola can also be used as a porch roof, allowing the placement of intertwining vines or clear roof panels. You can attach this type of overhang to a home’s exterior wall to create an outdoor seating area. 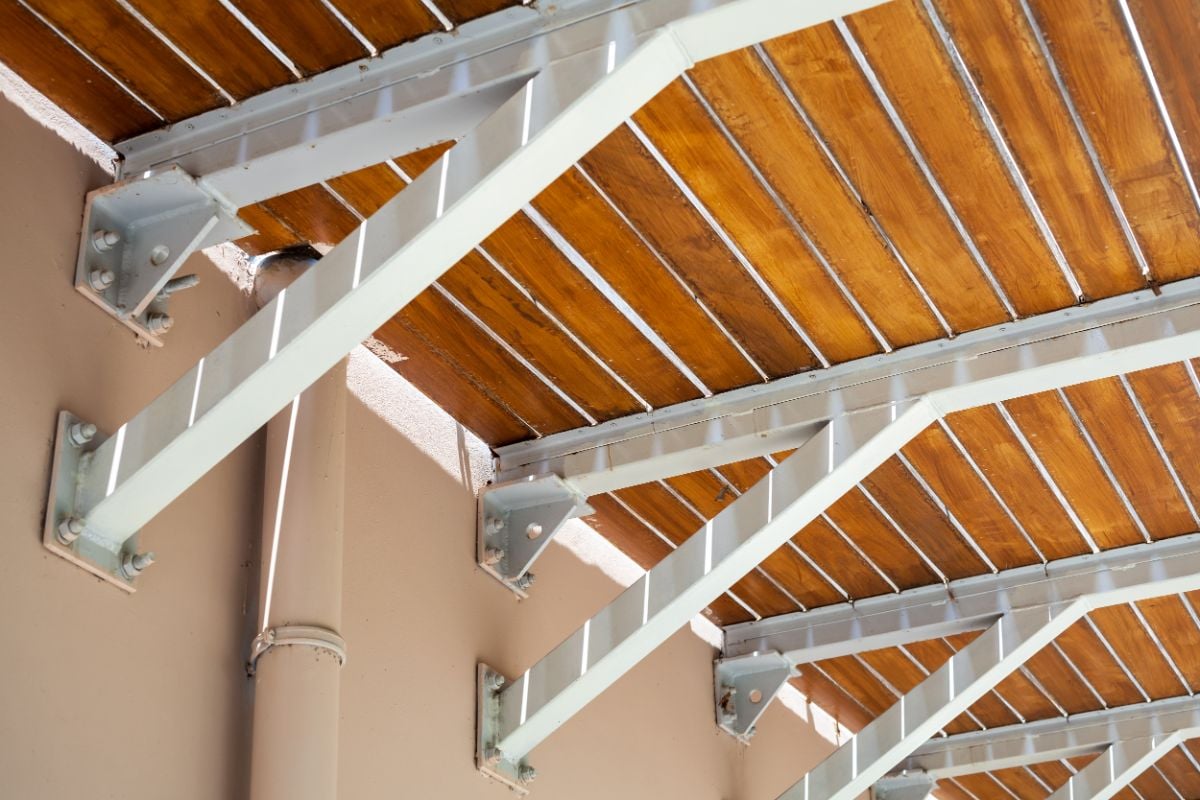 This type of overhang is found mostly in modern home designs. It extends straight out from the roofline as though suspended in the air.

This type of overhang creates a dramatic look, and it offers good protection from weather. They are typically flat. Additional support is needed for the soffit in areas with heavy snow in the winter.

The bonnet overhang has a very attractive design. It consists of two slopes. The top slope has more of an angle and sits higher than the lower slope with less of an angle.

There are potential problems here. Water may accumulate where the two slopes meet without proper construction and waterproofing. This type of roofing also tends to be more expensive to construct. 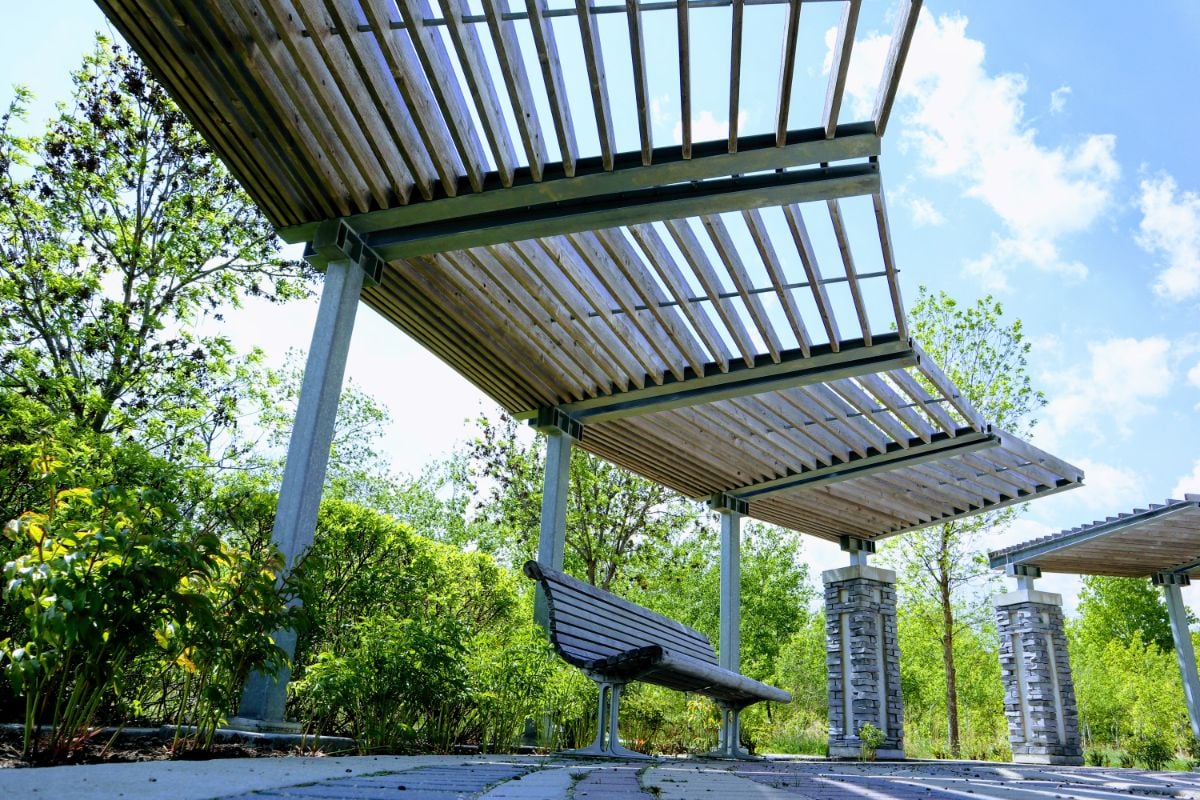 This type of overhang is most commonly seen over porches and other home entrances. Its base structure is typically made of wood, but the actual covering tends to be made of metals such as copper. The latter is heated and curved to track the line of the overhang.

It is also possible to shape the slope to your liking. If you live in an especially windy area, then you should go for a lower pitch — it will avoid the overhang from being swept up and destroyed.

The peak of the roof runs horizontally to the front and back exterior walls, and then cascades to a waterfall. The slope of this type of overhang is highly resistant to strong winds and can withstand blowing rain and snow.

Many homeowners use this type of overhang for a front porch extension. It creates a gazebo when screened-in, which can be used as a spacious sitting area.

Hexagonal overhangs are attached directly to a home’s siding and do not need an overhang where it meets the exterior wall. The rest of the angles typically have a slight overhang. 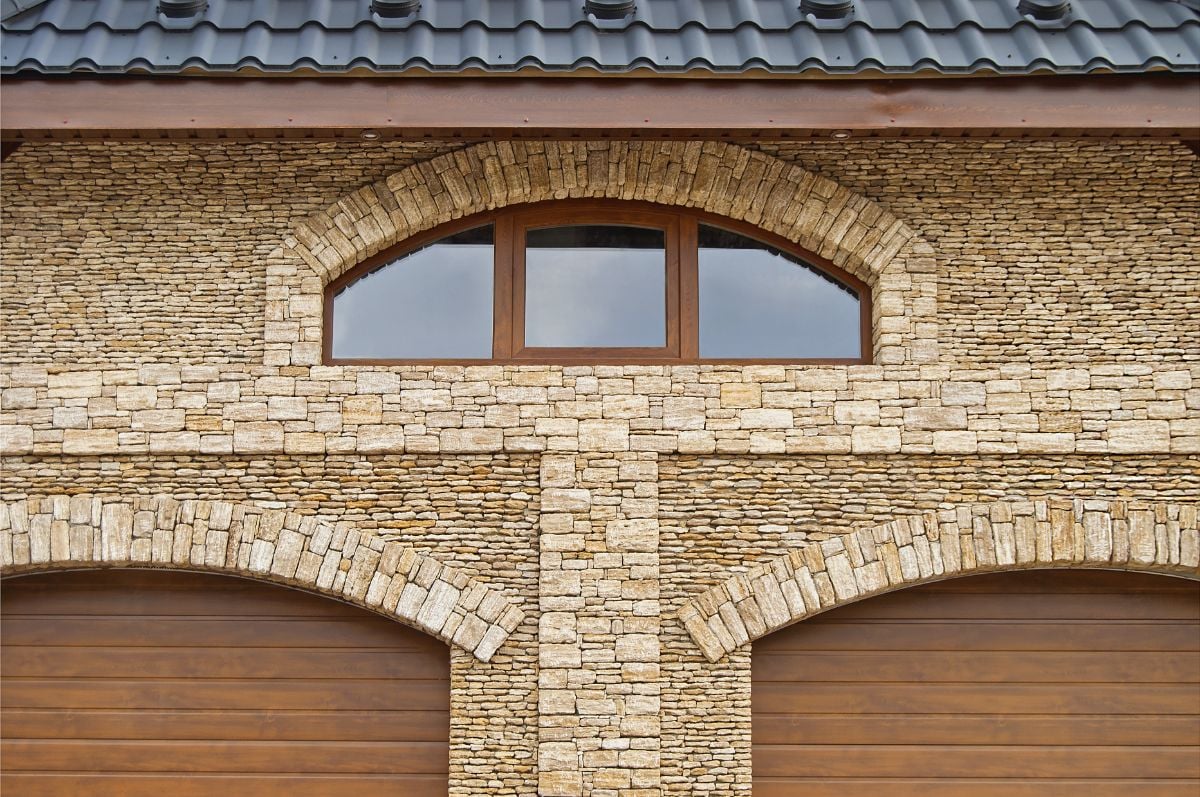 Some Specifics on Roof Overhang Dimensions

As there are numerous roof overhang types, there is no standard size. A roof overhang that is used to protect the exterior walls and siding of a home from rain should be 16 to 18 inches from the house.

A roof overhang that is designed to provide shade for windows to reduce heat build-up in the home should be at least 24 inches from the exterior wall.

It is important to note that once the length exceeds 24 inches the overhang must be reinforced. Here are some of the factors you should consider when deciding whether to install a roof overhang:

This latter factor needs some explanation. Reducing splashback consists of keeping water runoff from pouring into the ground around your house.

If enough water accumulates in this soil, it can ruin it. You will not be able to do any kind of gardening in the area. The build-up of water in the grounds around your house can also increase the dampness inside of it, especially in your basement.

This can lead to mold growth, wood rot, cracked cement, and other kinds of unpleasantness. Splashback can also cause dirt and mud to kick up and stain your exterior siding.

A Brief History of Roof Overhangs 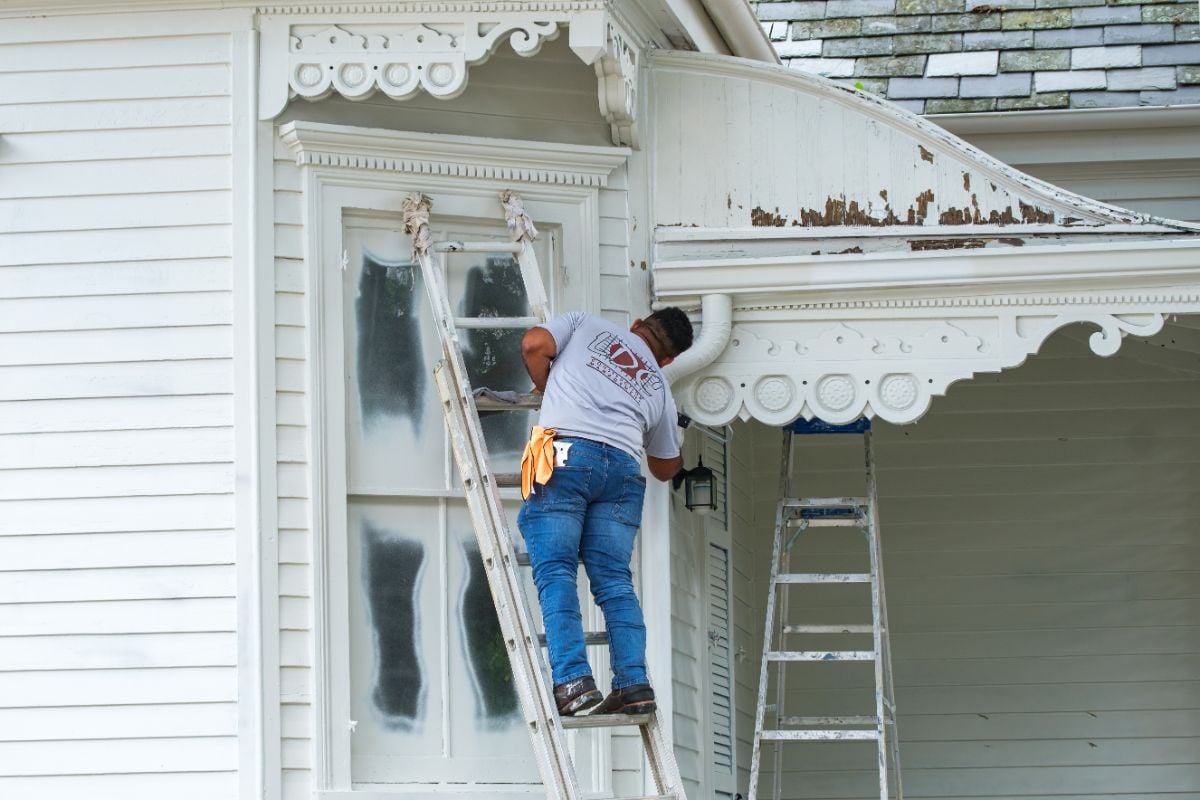 Overhangs have a long history. They were common in medieval Indian architecture, especially during the Mughal era from the 16th to 19th centuries. Extensive overhangs were also used in early Buddhist temples, and later became part of Tibetan, Chinese and Japanese architecture.

Roof overhangs are also present in European Renaissance architeture. The upper stories of timber-framed houses had overhangs called jetties. These began to disappear in the 18th century, when more homes began to be made of brick and stone.

In 17th century colonial America, overhangs were a common feature in New England. This particular style features an overhanging second story which ran across the front of the house or around it.

In the early 2oth century, the style was adopted by architects, such as Frank Lloyd Wright, who incorporated wide roof overhangs into his modernist aesthetic.