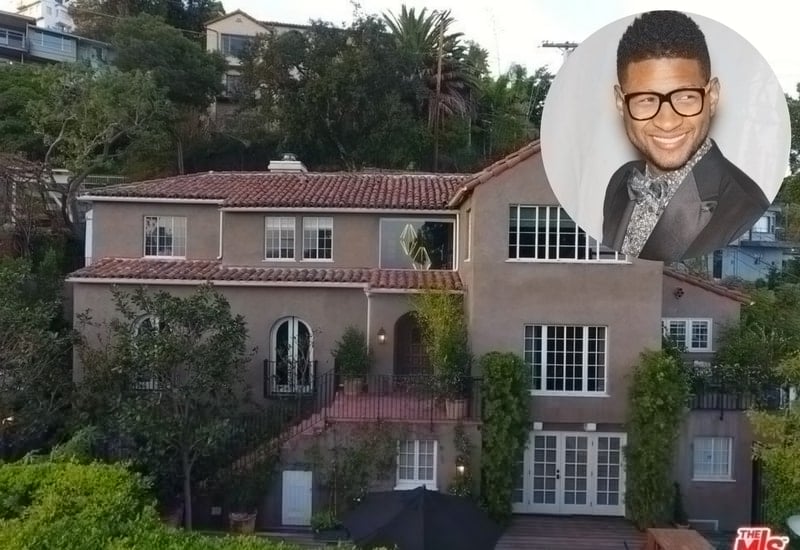 He's sold 43 million albums worldwide. That's a ton of albums which makes it possible for this A-list singer to buy multi-million dollar homes. Here's one in Hollywood Hills that he's selling for $4.2 million. Check it out.

I had no idea Usher had sold so many albums. According to Wikipedia’s discography on Usher, he’s sold over 43 million albums. That’s a lot.  Given he earned a royalty (approximately $1.20) on every sale, that’s a lot of money.

Of course these days, album sales aren’t like they used to be.  Now music is streamed on Spotify and Apple Music (we use Spotify and love it).  Artists still earn from streaming services, but it’s a different model than the longstanding album sales model.  While streaming has hurt artists’ overall revenue, the plus side is that concert tickets sell for way more than they did 20 years ago.  A-list musicians can easily sell millions of concert tickets for over $100 each.  Some sell for way more than $100.

Perched on a hill in the infamous Hollywood Hills burb of Los Angeles, this 4,261 sq. ft. pad is listed by Usher for $4.2 million.  As you can see, it’s close to all the action directly behind famed hotel Chateau Marmont.

The interior defies its exterior in that the interior is eccentric in many ways.  It has a dark and bright contrast color scheme in many rooms.  The exception is the updated kitchen which is beautiful.  Not that the rest of the house isn’t beautiful.  It’s different.  I like it, especially the white and dark living room with green furniture.  That’s a really cool room.

The property isn’t huge, but there are many outdoor sitting areas and even includes a small pool.  The outdoor sitting areas (patios and decks) are very private which is a huge plus for an A-list singer like Usher.  I actually like private, nook-style decks and patios.  Check out the entire house below.

Usher is a well-known R&B and pop singer who started at an early age of 15. He was the one behind the hits My Way, Confessions and Looking 4 Myself.

Born on October 14, 1978, in Chattanooga, Tennessee, Usher Terry Raymond IV, commonly known as Usher began singing when he was six as a choir member in his church. When he turned 14, Usher performed on the hit show Star Search, acquiring a recording contract with LaFace Records later on. His first, self-titled album was released in 1994, when Usher was only 15.

Usher would later on dominate the music industry using his polished vocals, extensive vocal range, chic style, sexy dance moves and sensual ballads. He was the creator of hit albums such as My Way, Confessions, Looking 4 Myself and Raymond v. Raymond, and acquired several Grammy and People’s Choice awards for his exceptional music.

In addition to his prodigous music, Usher has also worked as an actor. He landed roles in films such as The Faculty, Light It Up and In the Mix. He was also one of the coaches of TV show, The Voice, who came in during the season 4 along with Latin songstress Shakira, replacing Cee Lo Green and Christina Aguilera.

Usher also stayed busy with his charity, the New Look Foundation that provides funding for children in foster care and service programs. The charity also hold conferences and camps for at-risk youth, promoting leadership skills for kids in impoverished communities. Additionally, Usher went into business world, owning a record label US Records and a men’s cologne line, as well as the co-owner of the Cleveland Cavaliers basketball team.

The music maestro Usher just sold his longtime property in Alpharetta, Georgia for $1.5 million. He bought the home back in 1999 for $1.2 million located in a gated golf community known as Country Club of the South. The 10,823-square-foot home built in 1988 features an open floor plan and has been fully remodeled.

The expansive home is both spacious and welcoming with its courtyard filled by healthy and beautiful greens while the indoor features hardwood floors throughout. The living room has comfortable seats and a rug. There’s additional sunken living space near the large sauna featuring scattered recessed lights and a grand piano. There’s also a home theater perfect for a weekend movie or series marathon with family and friends. Step into the chef’s kitchen and see the top-of-the-line appliances and marble countertops and a large center island providing space for a breakfast bar. The sprawling primary suite features elegance all over the room from the flooring up to the ceiling and has a fireplace as well. The children’s room has large space added by the stylish bed while the bathroom is complete with a bathtub, shower room and is near the sauna, powder room, closet, and yoga studio.

The property also offers spectacular living space outside, added by the outdoor kitchen and dining. The heated swimming pool includes a spa perfect for relaxing while there’s a dance studio as well, perfect for the R&B artist like Usher. 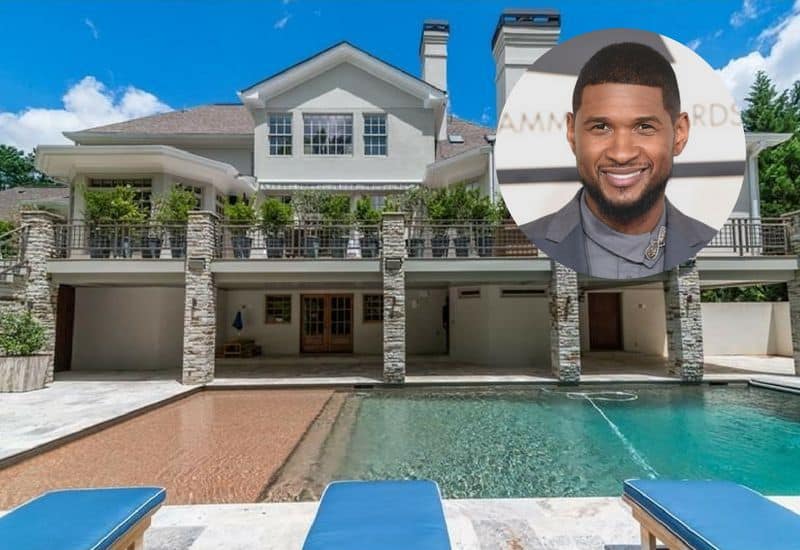 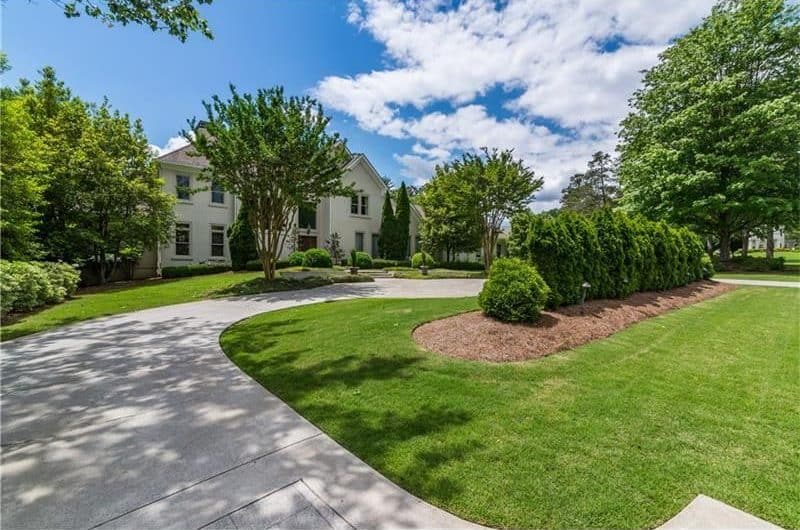 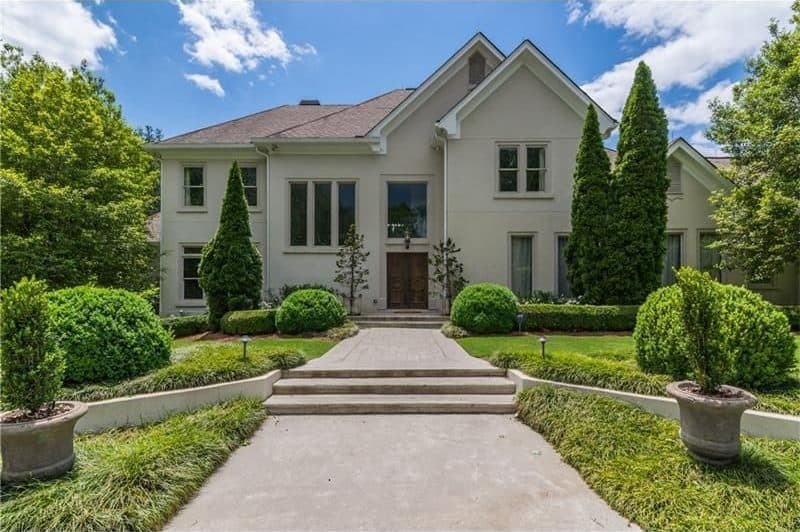 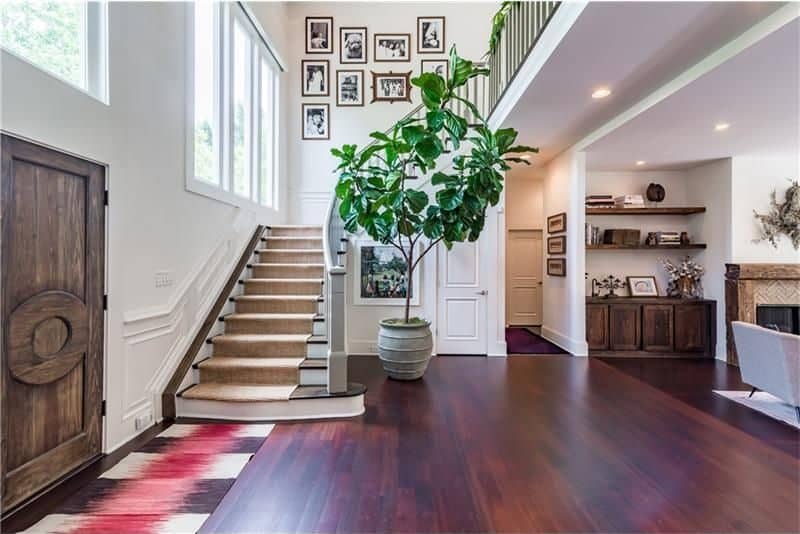 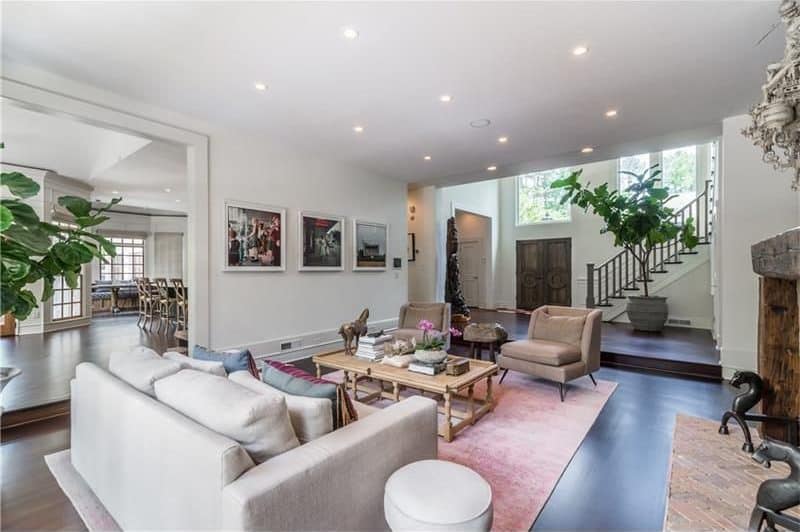 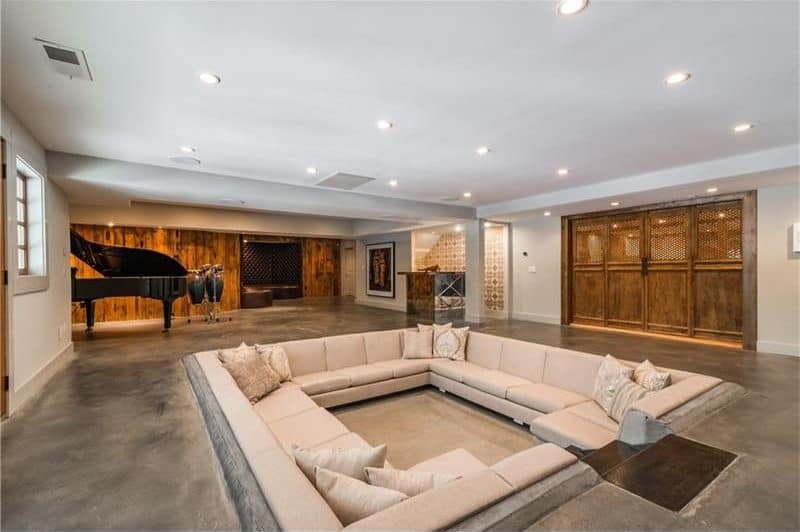 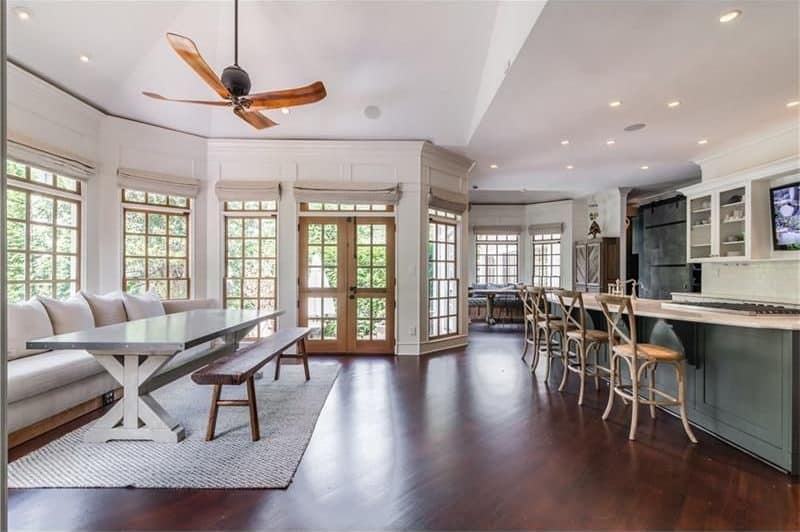 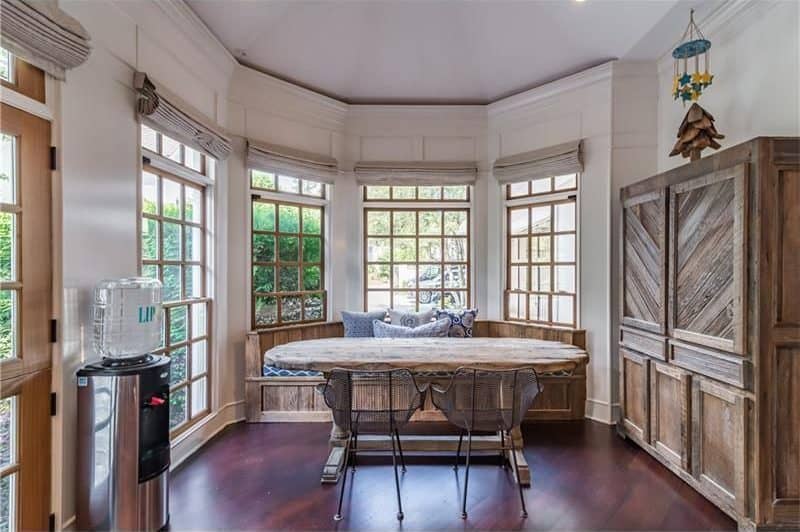 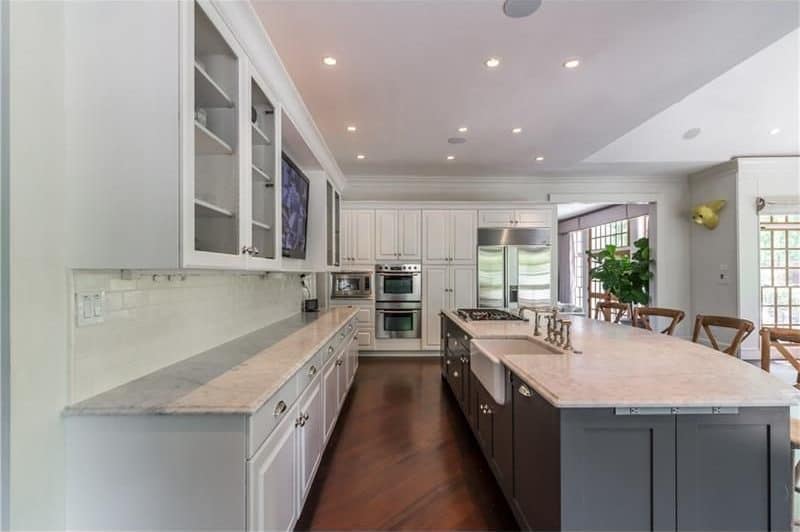 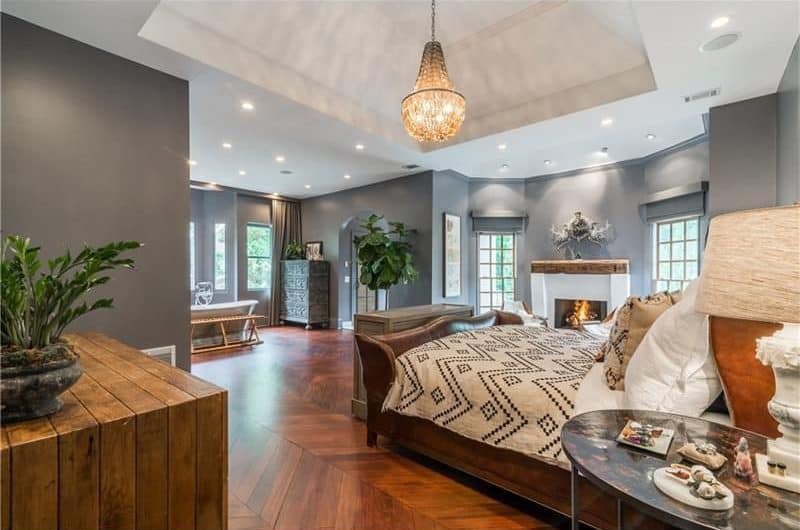 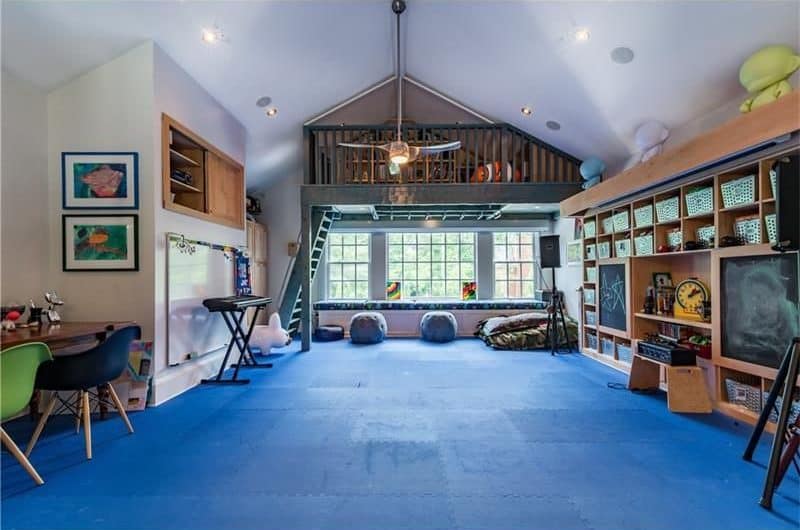 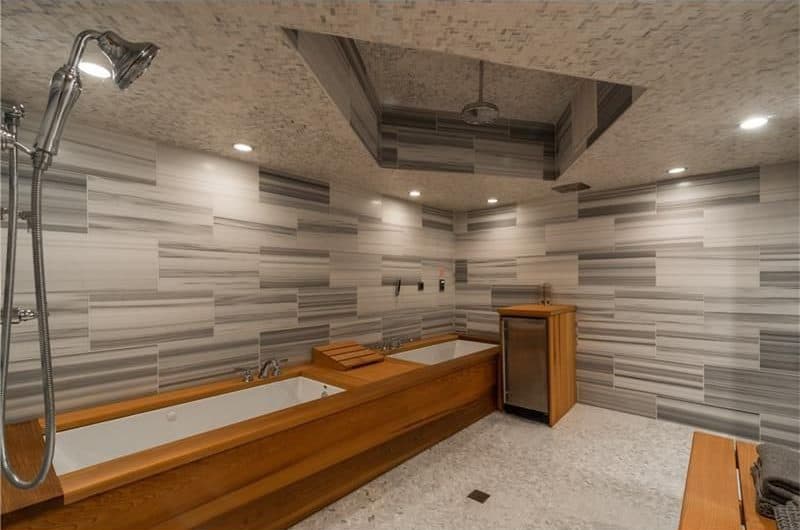 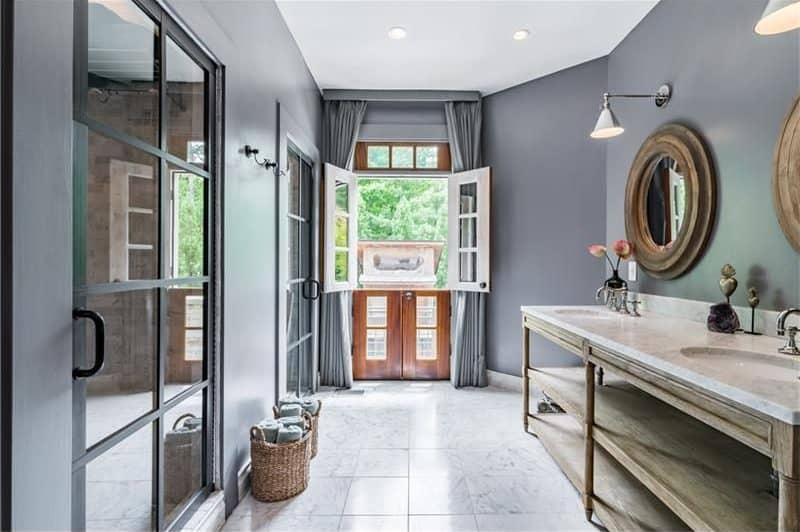 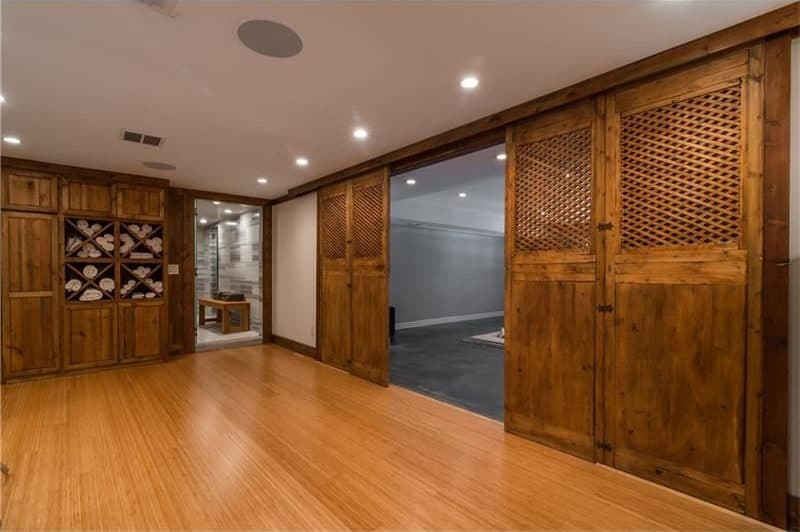 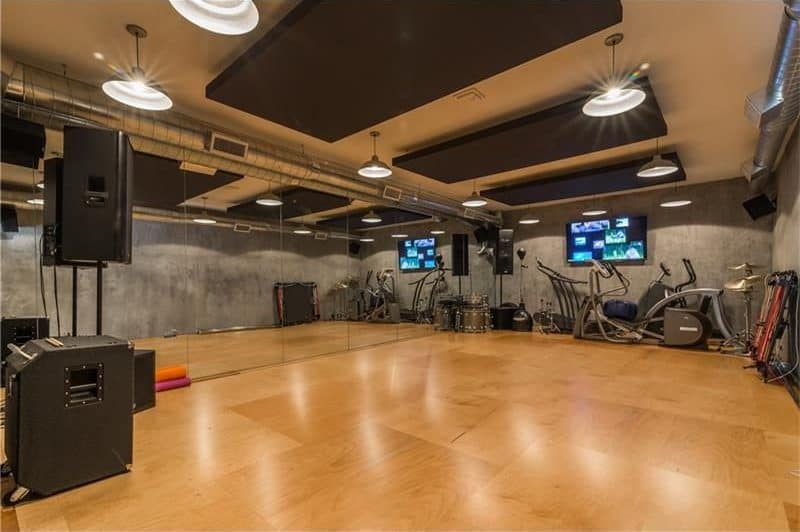 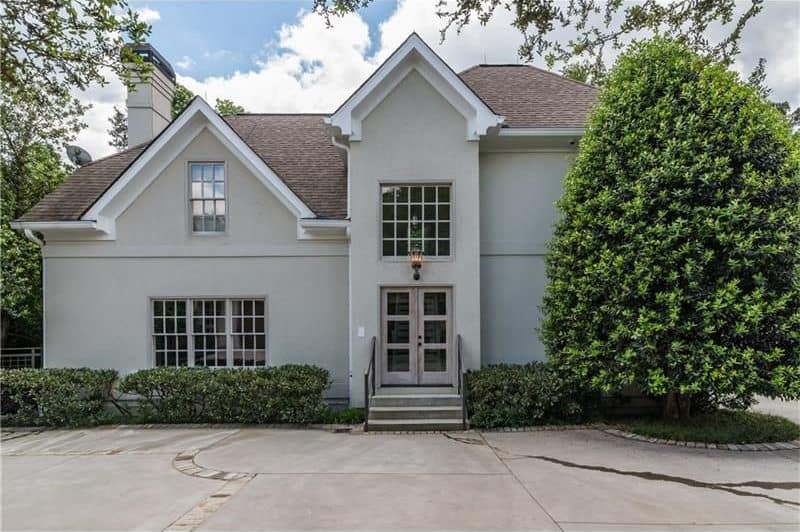 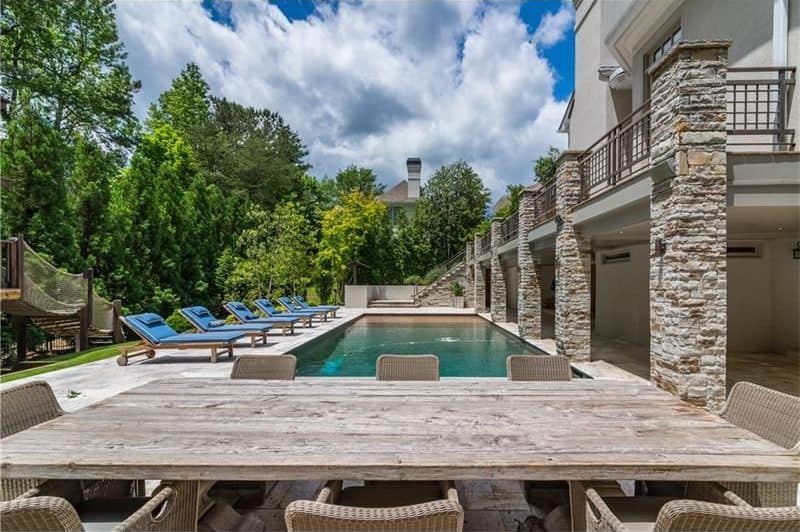 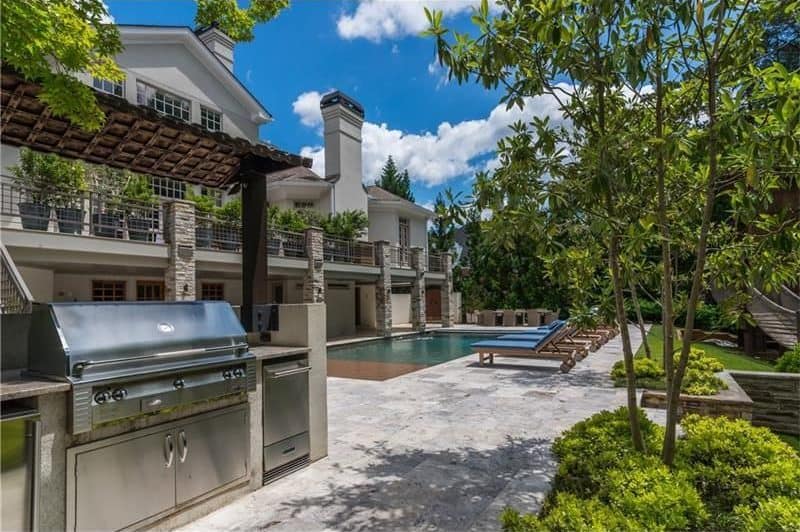 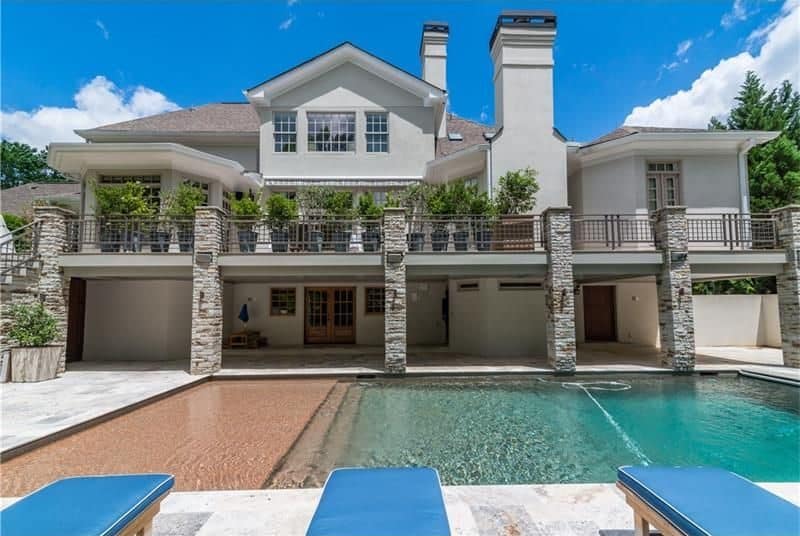 CelebrityNetWorth.com estimates his fortune at $180 million. 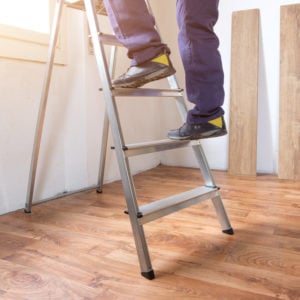 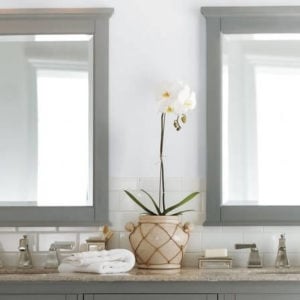