In the heart of the Pacific Palisades Riviera neighborhood in Los Angeles, California, you’ll find a beautiful family home set in park-like gardens covering a double lot. This is the house that was owned by Steven Bochco. It covers an impressive 10,583 sq feet (983 sq m) and is for sale at the listed price …

American actress and model Brooke Shields recently sold her Pacific Palisades home where she lived for many years with her husband. She sold the property to another celebrity (actor Sam Page) for the neat and tidy sum of $7.4 million. All photos are used with permission from TopTenRealEstateDeals.com The house This beautiful three-story house is …

Matt Damon is a well-known American actor, screenwriter, and producer. Born in Cambridge, Massachusetts, Damon’s first movie was Mystic Pizza in 1988. He went to Harvard as an English major but dropped out to pursue acting. He acted in a few movies before trying his hand at screenwriting. After winning an Academy Award for the best original …

Are you looking for a home that is a total knockout? Well, look no further than the home of Olympic Gold Medal-winning “Boxer of the Decade” Sugar Ray Leonard. His absolutely stunning home is located in the neighborhood of Pacific Palisades on the westside of Los Angeles, California and boasts an absolutely stunning view of …

Fast & Furious, Kiss of the Dragon, The Bank Job — Steve Chasman is known for producing action-packed movies that are truly over the top. It should come as no surprise that the producer’s home is equally lavish. It overlooks the Pacific Ocean, is loaded with amenities, and is everything you’d expect from a home …

Whoopi Goldberg is set to make millions in profit if she manages to sell her longtime Pacific Palisades home. The award-winning actress, comedian, human rights advocate, and “The View” host is one of the small circle of celebrities with an EGOT status for having won an Emmy, Grammy, Oscar, and Tony Award. Born in New …

Actor Dennis Quaid is popular for a wide variety of films from ‘Breaking Away’ to ‘The Day After Tomorrow’ and ‘A Dog’s Purpose.’ In his early years, Quaid dropped out of college to follow his dream of becoming an actor. He hit a big role in the acclaimed film Breaking Away, which got an Academy …

Chris Bosh is an NBA star played for Toronto Raptors and is currently signed by Miami Heat. He won back-to-back NBA Championships with Miami in 2011-2013 seasons along with fellow NBA star Dwayne Wade and Lebron James. Bosh’s career started when he was drafted 4th overall pick by the Toronto Raptors back in 2003, teaming …

VICE magazine co-founder, Shane Smith, rents out his $3.8M Pacific Palisades home for $17.5K a month. A luxurious modern piece of art right at the warm and sunny state of California. Known as VICE magazine creator and journalist, Shane Smith has taken the news platform entertainment group to new heights as the magazine company is …

Television star and fashion designer Lauren Conrad grew up in Laguna Beach, California and got her big break in September 2004 when she was cast in the reality tv show Laguna Beach: The Real Orange County. Her spin-off series, The Hills, debuted in 2006 after she moved to Los Angeles to chase her dream of …

Where is the Pacific Palisades?

Pacific Palisades lies on the ocean in between just west of Beverly Hills and southeast of Malibu in Southern California.

Which Celebrities live in the Pacific Palisades?

Given its proximity to Hollywood, a good number of movie stars and A-list celebs live in Pacific Palisades. Some who have or still live there include Steven Spielberg, Whoopi Goldberg, Sugar Ray Leonard, Steve Chasman, Dennis Quaid, Chris Bosh, Shane Smith and Lauren Conrad (to name a few).

The Beach and Hills 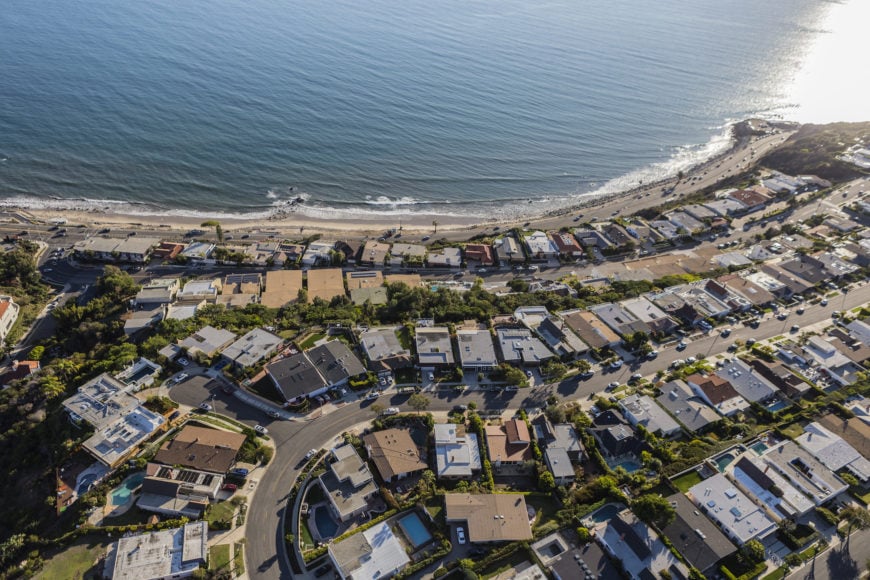 The main beach in Pacific Palisades is Sunset Point Beach pictured here. The beach is divided from the hills where all the mansions and homes are set by State Route 1 highway. Unlike Malibu, houses are not on the beach. Instead, the celebs’ houses are on the hill rising up from the Pacific Ocean. As you can see, many houses have amazing views of the ocean.