Seafoam green walls, seashell shower hooks, and starfish accessories -- we've all been in and out such sea-themed bathrooms. But when did this craze start and why does it persist? 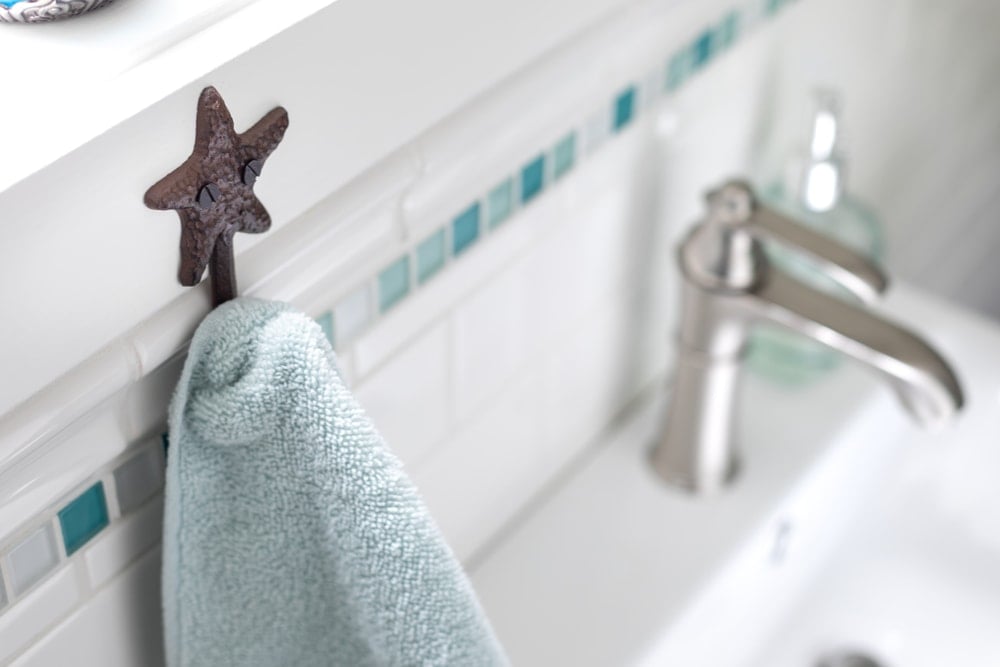 At first, I thought it was just another trapping of the 1970s like disco, fondue sets, and that endless sea of brown that colored furnishings, clothing, crockery, you name it. But I see the theme persists well into my thirties, where I spy anchor and life preserver shaped shower curtain hooks and hand towels adorned with them at my local Marshall’s.

I also thought that maybe it was just an East Coast thing, like setting the gold standard for pizza and complaining about the MTA. After all, New York is a world hub situated on the Atlantic and there’s so much shoreline throughout New York and New Jersey so blue and seafoam green walls or tilework with seashell and nautical-themed accessories are a common sight in bathrooms all the way from Cape May to Montauk.

But now I’ve even seen toilet tanks festooned with sand dollars and dried starfish in Chicago and palm tree printed shower curtains Phoenix. What’s up with nautical and sea-themed decor for the bathroom? Why does this theme persist, and where did it begin?

Really, I don’t get it! Is it because you’re supposed to imagine a paradisaical beach vacation while you’re taking a shower or washing your hands? Or thinking about the golden sands of Waikiki or catching waves on Palm Beach as you take a dump, with that life preserver hanging on the wall in case you fall in? Fish and mermaids, other aquatic flora and fauna like coral and starfish, boats and anchors, and accouterments tend to feature prominently to compound that feeling that you took a day trip to Long Beach instead of the crapper.

Since colors can affect your moods, blue is associated with feeling calmer and it tends to feature prominently in sea-themed bathrooms as a result. After all, for a lot of people, the bathroom might be the only place you have any semblance of escape from your job, kids, or the hassles of daily life. Who wouldn’t want to stare at blue walls joined by tan towels that resemble sand, or a soothing array of blues, whites, and light greens while visions of sunny resorts and paid time off dance in your head?

But it doesn’t have to be blue. Beach-themed bathrooms have come in all colors throughout time. 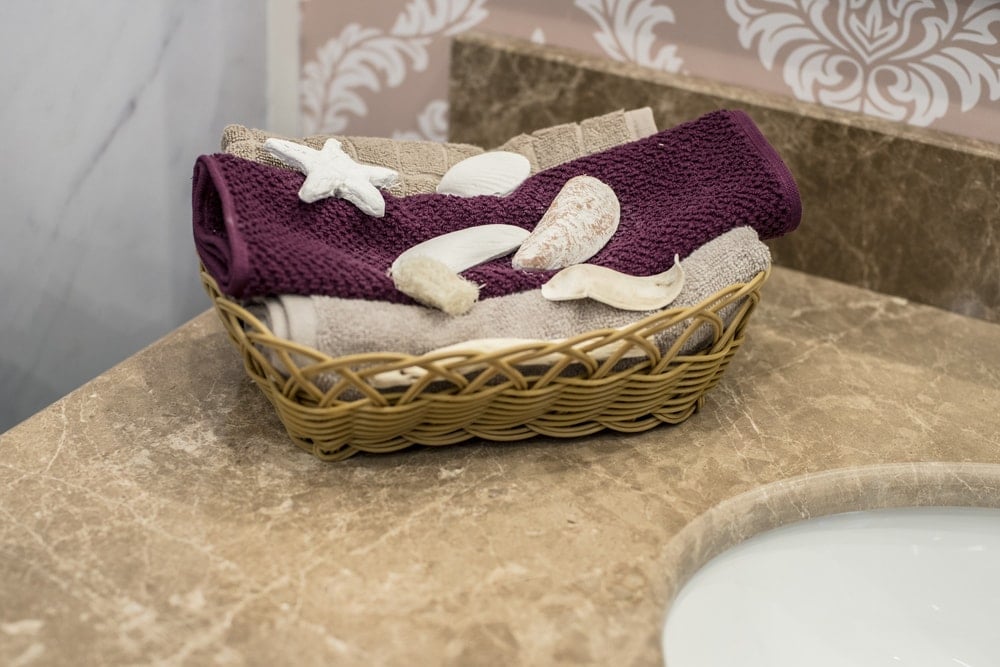 I remember this hideous wallpaper we had in the primary bathroom growing up that would’ve made the cast of Flip This House cry vomit. It was white and covered with these brown seahorses. Of course, they were brown. Brown to match that mother-ass ugly couch that still haunts me to this day. They had this expression that was basically a cry for help as they vacantly stared out at this nebulous netherworld of sea sponges and coral that was also brown with touches of green and gold, as though The Swamp Thing wantonly cut a rope after a week’s worth of Taco Bell all over the wall. It was a travesty of an ocean theme if you will. Quite far from the purview of bucolic pastel blues, beiges, whites, yellows, and greens that frequently comprise the beach themes seen in shitters across America.

While I got a special place in my heart full of hate for certain 1970s design principles (sorry-not-sorry, I just do!), the beach element still held appeal. Once the depressed umber seahorses got peeled off the wall in favor of a Barbie pink sponge-paint job, a seashell-shaped toilet lid came to be. I guess the logic in this was that it resembled a clam or oyster shell when you opened and closed the toilet. Dude, I don’t want THAT pearl waiting inside.

So, when did this phenomenon start? Why do people put beach and nautical themes in bathrooms? 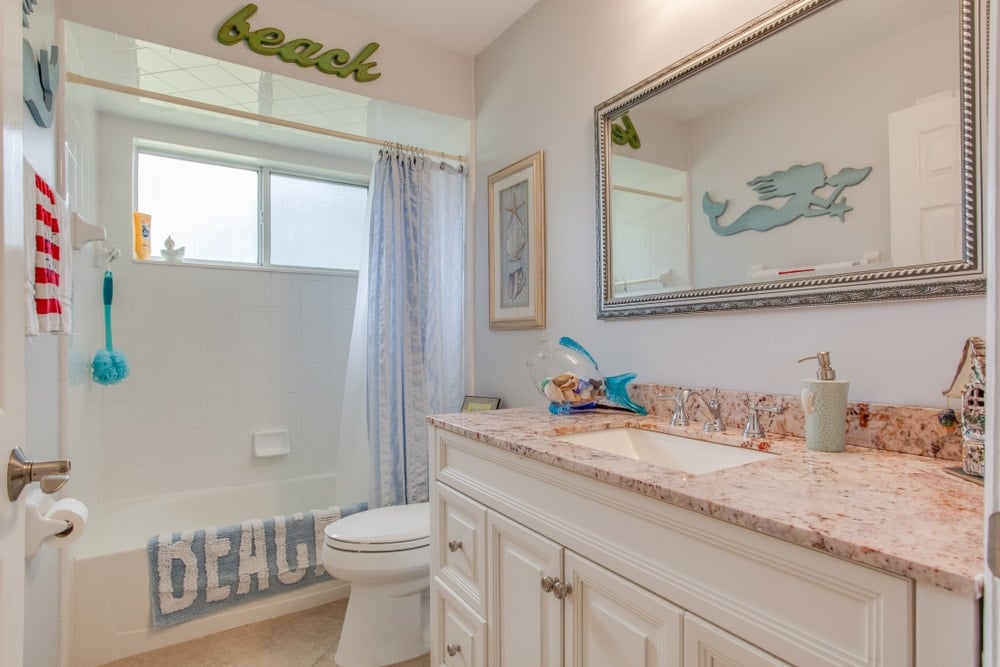 Being the hard-nosed investigator that I am, I tried to dive into the heart of the matter by finding out if there’s any particular cultural or historical context to the beach-themed bathroom. The way that people use their living space over time is honestly a fascinating anthropological study and sometimes the context in home design is purely historical like carpeting in the bathroom because it was an expression of luxurious textiles becoming more common in the postwar economic boom. These nuances can also be regional like New York building up and Los Angeles building up with respect to urban sprawl due to cultural and land use differences.

But virtually NOTHING came up in a cursory Google search, which was surprising. The top result is a Reddit post where someone asks the same question. The question yielded a discussion about how “bathrooms have a lot of water and so does the ocean”.

Okay, but…I’d HOPE there wouldn’t be a lot of water or else there’s going to be lots of mold and expensive plumber bills. That and well, I don’t know about you, but I don’t think of the ocean when the need to piss strikes. Getting lost in the ocean or trying to get a stable footing in the sand is probably the last thing on my mind.

Beaches also tend to be a ubiquitous theme for high school dances and proms, the following suit in adulthood as there are countless Pinterest guides for bridal showers, weddings, and if in a coastal area, housewarming parties, that entail making your event feel like a beachfront resort even if you’re several miles from the real thing. Birthday parties and cakes are also popular choices for beach paraphernalia, who wouldn’t love dying frosting blue or getting a castle mold to make a “sandcastle” crumb cake? All of this, yet the beach theme remains the most common choice for freaking bathrooms.

I looked to the ever-trustworthy HGTV for guidance. No historical context really provided, just some extra tips if you’re going for a beachy feel in the same place you go to shave or tweeze after showering. The same cultural observation that beach-themed bathrooms are definitely more common on the East Coast and other areas where beaches are nearby or a reasonable distance away, but you’ll find them in plenty of landlocked regions likely as a form of escapism.

I tried other search queries and reading up on decor sites but to no avail.

We don’t really know who had the first beach-themed bathroom or why they decided to do this.

I mean, I can understand the element of escapism if you’re staying at a resort or you’re incredibly far from the real thing. But apparently, if you’re in a New England coastal town, you want the bathroom to look just like a historical building made from old ships with extra nautical touches in the form of found objects. Where once again, if it’s a vacation rental, it totally makes sense because that kind of decor would heighten the feeling that you’re away from home. Fantastical elements like colors not normally seen in home design, wall decor and other objects that denote you’re in a totally different location, and architectural principles that are consistent with other structures nearby all meld together to make that temporarily-inhabited space feel unique and grant the visitor more headspace.

So, someone probably saw that cottage interior and decided to remodel their bathroom based on the design and then it just caught on when someone else saw it and was totally wowed by the aesthetic. 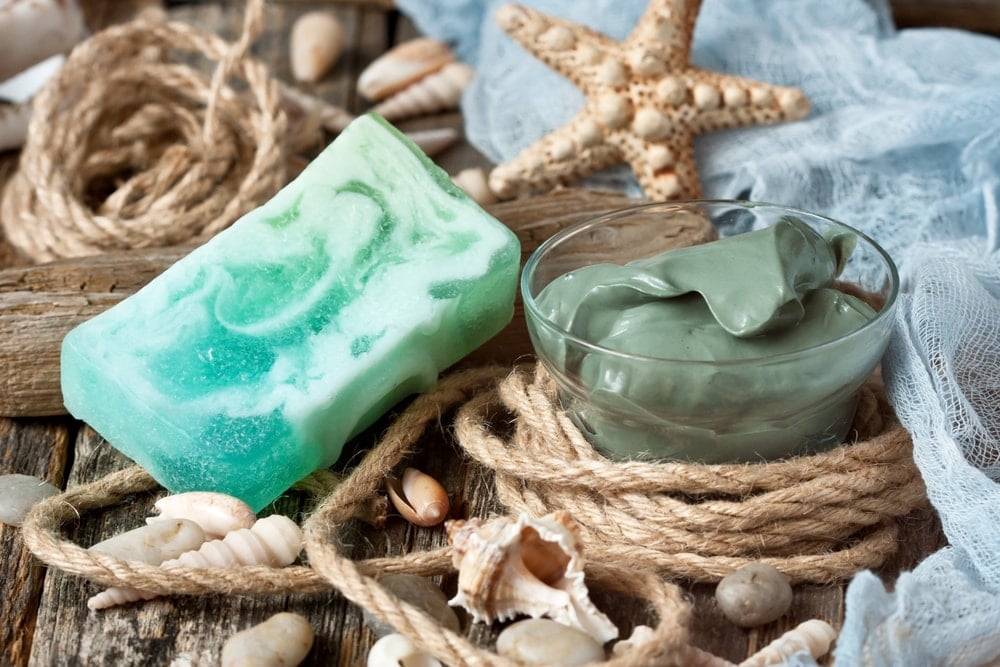 “Gorgeous! TOTALLY reminds me of that time that I ralphed all over the Atlantic City boardwalk after hitting Wet Willie’s at the Tropicana!” I may or may not have a story about the time I accidentally crashed a bachelorette party in Atlantic City with the Chris Christie Vineyards blueberry wine at a games convention.

And this design probably persisted for those aesthetic reasons alone: beachy colors are really pretty and calming. Blues and whites are easy to accessorize and complement with other colors. Found objects are a fun and inexpensive way to decorate as well, though when it comes to the intended use of the room you need to be careful. Personally, I freak out at the prospect of toilet tank decorations because I just remember that time I had to call my landlord in dismay after I accidentally sideswiped an eyeliner sharpener right into the toilet and was unable to retrieve it so OF COURSE there was a backup. Wall hangings though? We’re good!

But aesthetics aside, 39 million Americans can’t afford to take a vacation. The very home that you inhabit can be a form of escapism if you’re constantly at work, a prison if you’re a stay-at-home parent and/or work at home, or perhaps a mix of both depending on your feelings about where you live and who you live with. So, having some element of vacation-like escapism and respite is naturally desirable in a space where it’s socially acceptable to close the door and just be left alone with your thoughts and bodily functions for a brief moment in time.

Just be careful not to get sand in your crack(s). That hurts whether it happens at a real beach or not.