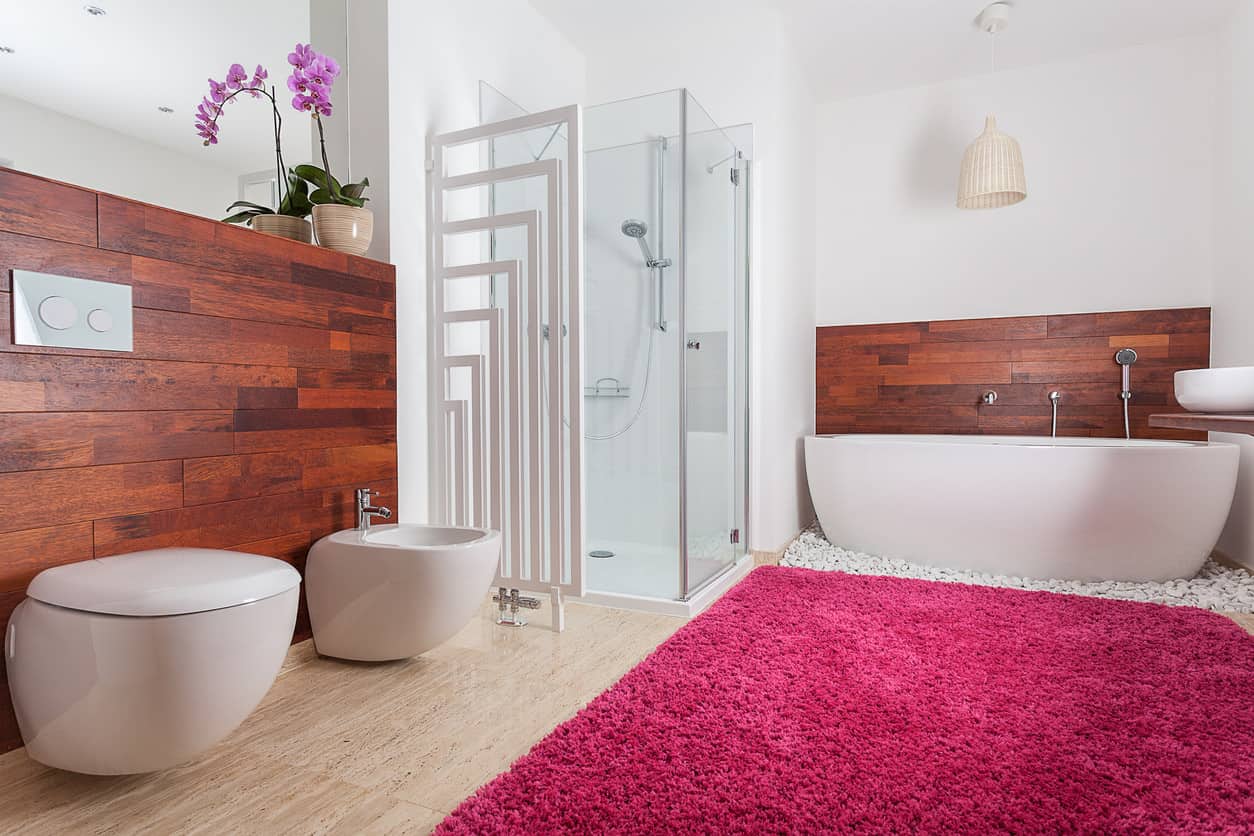 A man’s home is his castle, yadda yadda, but I will never for the life of me understand why people do this.

Look, paint the walls whatever color you like. Get some decorative columns that are so hideously ostentatious that the manager of your local Cheesecake Factory will beg for your phone number. Commit to an expensive potential disaster like getting a pool or Barbie-pink countertops installed, because it’s been your dream home feature in your heart of hearts. But why, WHY would you put carpeting in the bathroom?!

I don’t mean a little area rug. You can get those for a few bucks at most home goods stores, and it’s nice not to step on cold tile when you roll out of bed and immediately meander to the toilet as we all do. After all, that’s why bathroom rugs are specially made to have both a washable bath mat and come with a matching bib-shaped one that wraps around most toilet bases seamlessly. Bathrooms are really just not meant for having carpet cut. Area rugs are your friend; you can wash them, fold and store them if they’re not in use, and they’re available in all kinds of colors and shapes which makes redecorating any room a snap. Area rugs are fantastic! Unless they’re those annoying ones that have those tassels at the end which only serve to get stuck in the vacuum cleaner and end up killing an entire afternoon in one go, those should never be kept indoors. 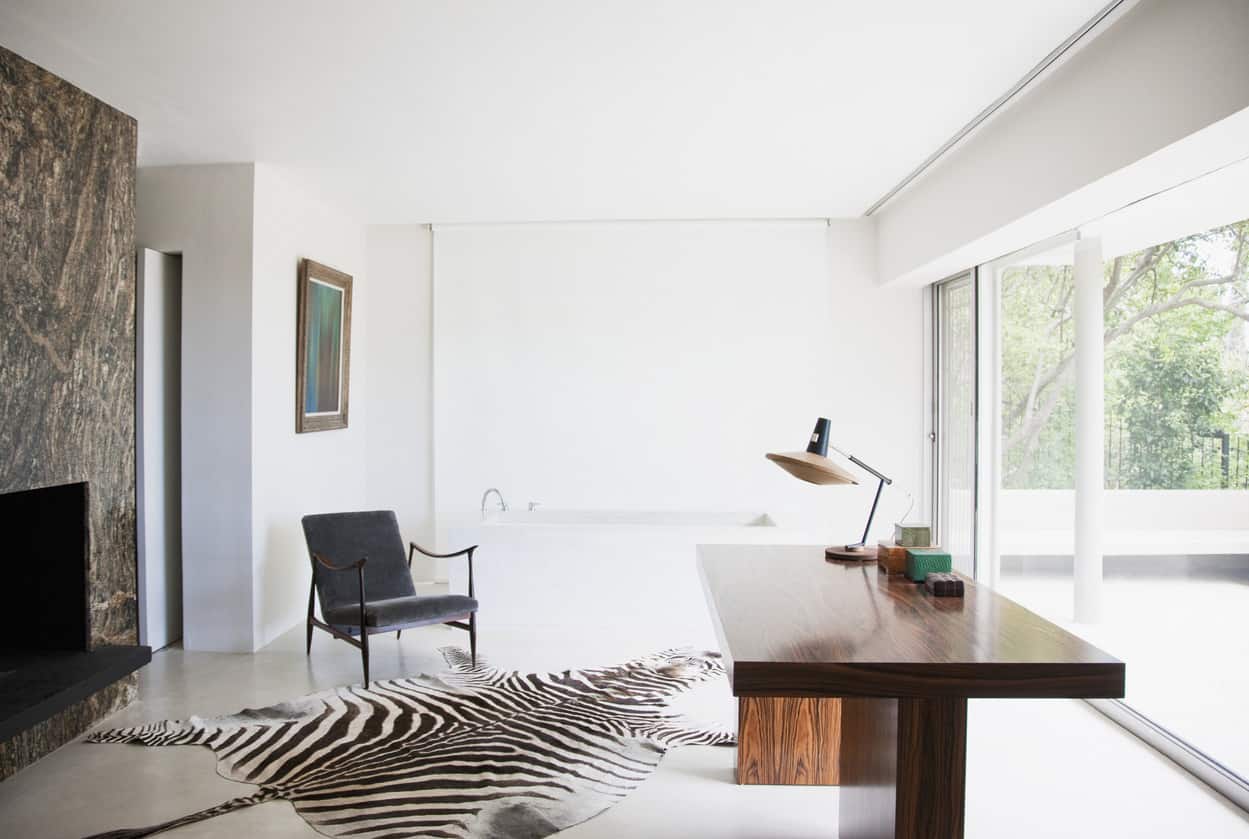 This area rug is just tacky and tasteless, but at least it doesn’t have those irksome tassels that only exist to cause Roombas to choke, go on strike as a result, and eventually lead the robot revolution against us humanoids.

Bathroom floors can get chilly and scrubbing tile can get painful and tedious. Hence, stepping onto a plush, soft pile when you’re fresh out of the shower can sound appealing. But at what cost?

Table of Contents Show
Water, Water Everywhere and It’s Hastening the Siege of Black Mold
The Curious Origin of Fuzzy Bathroom Floors
Why Did The Bathroom Carpet Trend Resurface? 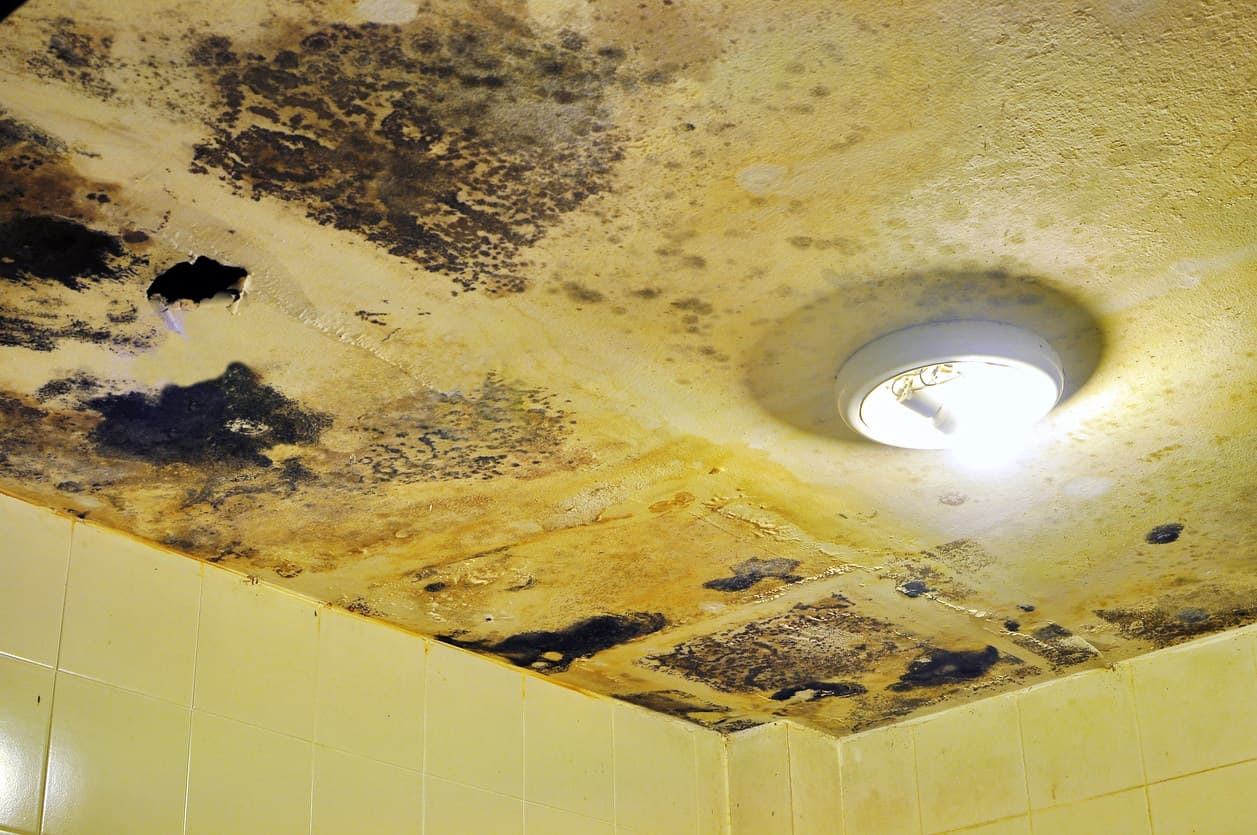 Real estate professionals consider wall-to-wall carpeting in a bathroom to be the kiss of death as far as selling your home is concerned. If comparable homes in the area don’t have a carpeted bathroom, they’re more likely to sell. Full bathrooms are already susceptible to mold as it is, but carpeting gives that mold the chance to go from a bloom to a whole frigging botanical garden.

Carpeting is so friendly to mold because it easily traps moisture and offers so many opportunities for it to thrive. One long shower, and your carpet-laden bathroom can host more mold than a penicillin lab even if you’re running a fan and otherwise have proper ventilation. The higher the carpet’s pile is, the softer it feels on your feet but the worse idea it becomes to leave it in the bathroom. While that plush shag rug or wool carpeting may feel like walking on a cloud after a warm and refreshing bath, it’s not like an area rug where you can just toss it in the washing machine when it starts to get gross. That carpeting is bolted into the floor and can’t be easily removed to get any trapped mold out, giving it the opportunity to seek other damp places to breed in. That carpet you insist on? It’s like you’re giving that toxic black mold fertility drugs, what the hell is wrong with you!

Mold aside, can you imagine how gross it must be if it’s your toilet and not the shower steam causing a problem? 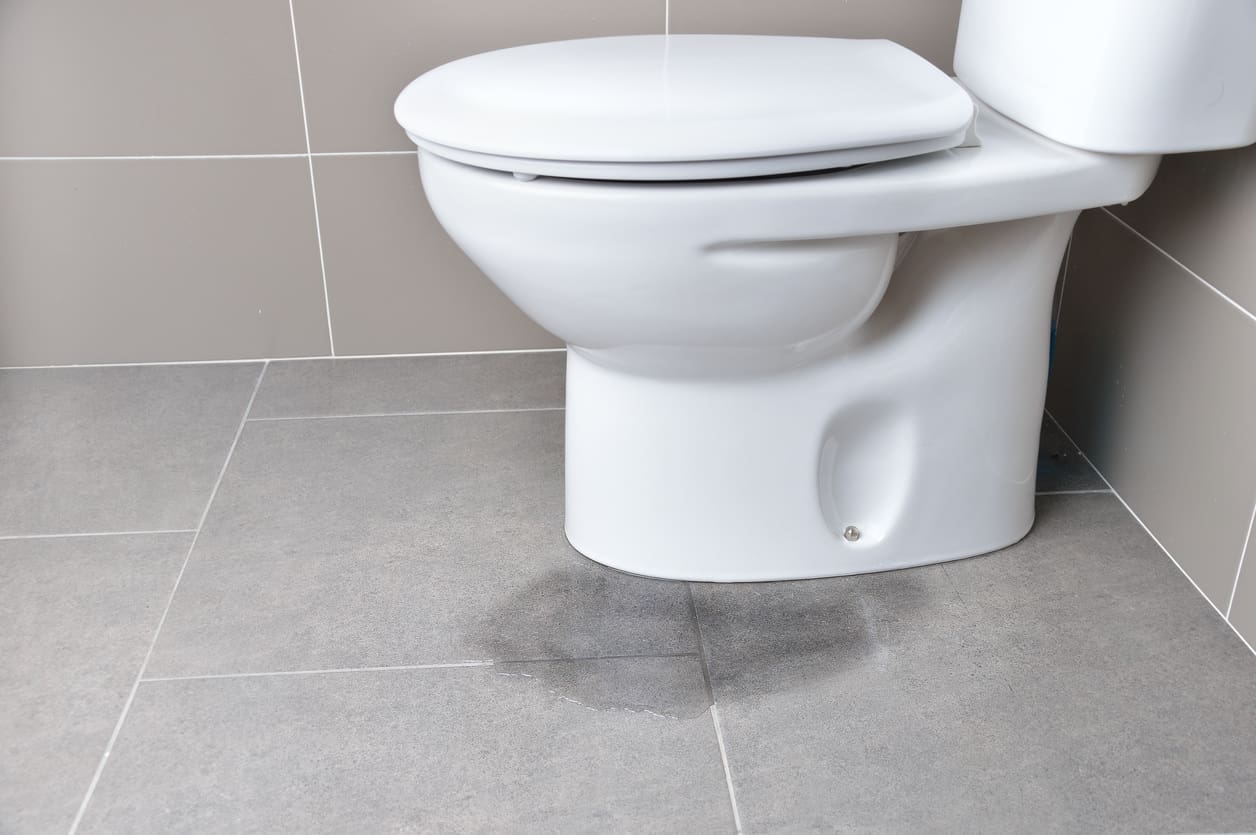 Now imagine there’s *carpet* around this and you have no idea it’s leaking like that until you step in it.

My old rental was a spacious pre-war studio on the ground floor, these basement and ground floor units were dubbed “Polish penthouses” back in 1960s NYC. I never knew the exact square footage but I always said it was “perfect for a girl and her toad, but if a couple lived together there they’d want to kill each other” square feet. The bathroom was a tiny room all the way in the back of the apartment right near where I slept and kept things like my clothes and books. Too early one morning, I got woken up by a really loud rainstorm that practically turned 195th Street into a canal.

First, it was just the raindrops slamming my rickety old air conditioner, then suddenly I hear this Jurassic Park type rumbling. Instead of a T-Rex causing the cup of water by my bed to shake, the rumbling first seemed to come from the thunder rolling over the nearby reservoir. But when I heard the splashes, it got a lot more sinister: the toilet started backing up something fierce, and I immediately freaked out and started laying down towels to the point that I had no more left once a precarious barrier had been erected at the doorjamb. The step between the bathroom and alcove wasn’t enough and closing the door was useless, throwing down those towels before the water could seep into my books, boxes of makeup, and other things I had stored in the alcove was a priority. Since the bathroom was only about five by five feet, it didn’t take long before the water was at least three inches deep. Water ceaselessly rose up and hurled out of the toilet like it was a college student the morning after pounding tequila shots for the first time.

Now, are you ready for the MOST FUN part of this story?! My landlord didn’t have a wet vac so I had to run to the junk store down the street and stock up on more towels than a frigging Holiday Inn purchasing department, and just throw them all down in that mess as though I was sopping up a far less appetizing soup with stale bread. It was a fantastic way to spend my one day off from school and work that week, dragging a ludicrous amount of toilet water soaked towels to the laundromat down the street and having to pay for them and their cleaning out of my own pocket. And all I could think was, “Good thing I was home when this happened, I would’ve been furious had the whole place flooded because this shitty old building couldn’t weather a rainstorm!” (Pre-war construction in NYC is paradoxically built to last foundation-wise, yet is WAY too delicate in other respects.)

Whether it was the ground floor placement, bad pipework, the building being so old– all or one of these things may have contributed to the horrific flood of Biblical proportions. But depending on what kind of home you bought, you may want to bear these things in mind if you’re thinking about laying carpet in the bathroom. It’s bad enough when you’re home: even worse if you’re not there to try turning the tide in real time. The above happened to me two more times after bad storms until I moved to a higher floor in the same building, each time making me glad I was at least home when it happened and prepared with my ungodly amount of towels.

Even if you take additional precautions by installing a concrete subfloor or using modular carpet squares to prevent having the ENTIRE thing ripped out if something like the above happens, mold abatement is no joke. It can be fairly inexpensive to mitigate if it’s confined to one area, but if you’ve got a big bathroom and it spreads like melted butter on some piping hot toast, we’re talking having to evacuate your home and pay well into tens of thousands of dollars. If you have mold allergies, it can make your house virtually uninhabitable.

If you’re tired of cold feet, get a bigger area rug. The kind that has those rubbery treads on the bottom is purposely intended for bathrooms so that they’re washable and you can drape them over the edge of the bathtub to dry. Plunk down a nice fluffy towel if you can’t find the right rug, you can fold them up for optimal spacing then wash them once they’ve been stepped on too much. Or have to stem the flow of a rogue toilet if you bought a really old house or apartment.

“Hold the phone,” you interject. “My house came with a carpeted bathroom, I didn’t choose this.” So, who got the idea to put carpeting in the bathroom? Why did people do this?

Well, at one time, wall-to-wall carpeting was the pinnacle of luxury in home design.

The 1950s were in swing and American suburbs started filling up en masse with couples and young families, before we’d be haunted by the likes of McMansions and their interior eldritch abominations with less taste than a wad of gum you’ve been chewing an entire cross-country flight. 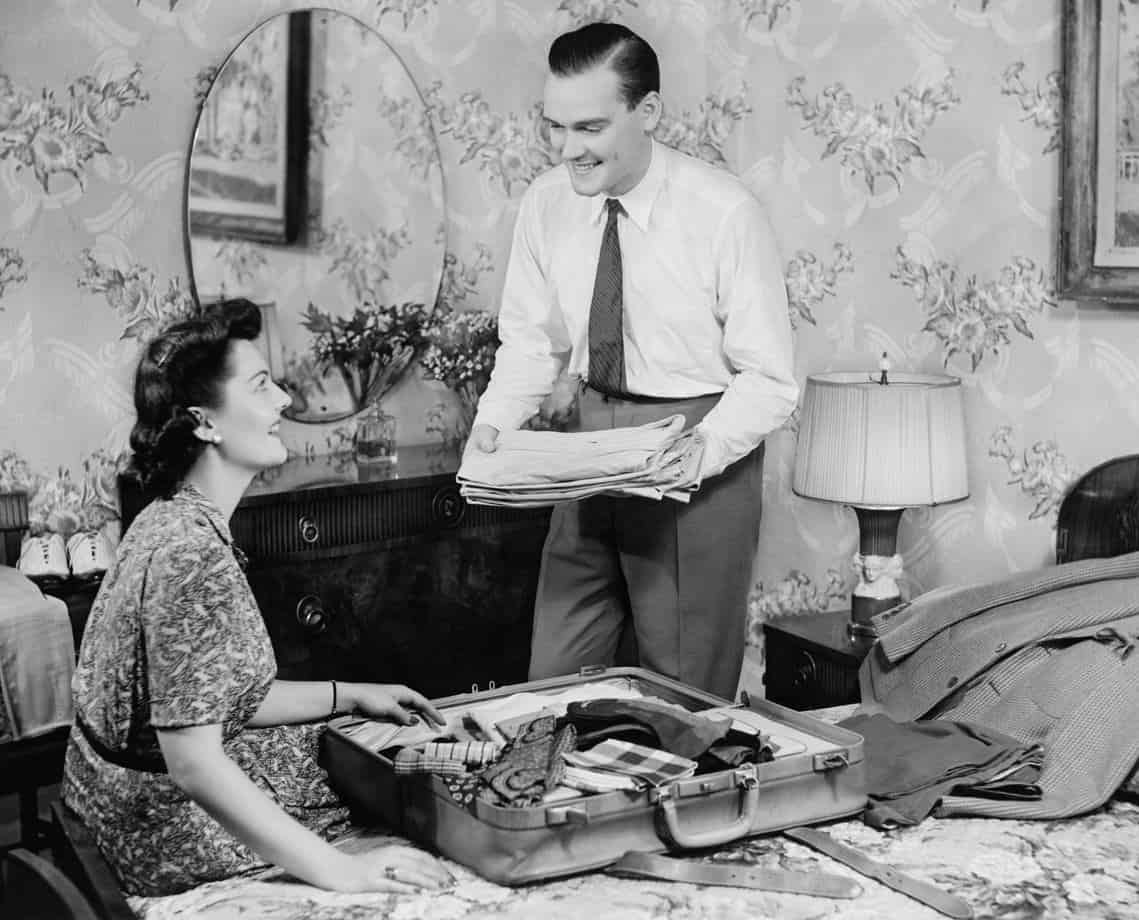 “Hey honey, I’m going out for a pack of cigarettes. Cigarettes…that’s it.”

America was in a period of postwar prosperity (well…for certain Americans, anyway) and it was long before a mid-level professional with two advanced degrees had to consider having only one roommate a sign of moving on up. Gawdy McMansions wouldn’t come about for another few decades, and people who lived in apartments all their lives were happy to have a little over 1,000 square feet to spread out in. So while bragging about home size and seeing who could pull off the biggest and most expensive DIY project before caving in and calling a professional to fix what you screwed up wouldn’t become in vogue yet? That American one-upmanship was still at play in those glorified 1950s where if you wanted to flaunt how well-off your family was, your house had the newest and hottest gimmick around.

Carpeting wasn’t readily available to most families, only wealthier people could afford to find carpets let alone get them custom-cut for their homes. Large throw rugs and area rugs were common sights to protect hardwood floors, but wall-to-wall carpeting was not ubiquitous in middle class homes like it would later become. Plush carpeting was a sign of status back then, and a means of showing off. And you didn’t just carpet one or two rooms like future home designs would entail, you blew your cash on covering the ENTIRE floor in carpet even the bathroom. It was like pouring hair growth formula on a bowling ball: you didn’t do it because you really wanted to or had some functional or even aesthetic reason for this. You carpeted the area where you bathe and poop solely because you could.

Before the end of the decade though, production capabilities changed and the middle class had unparalleled, unrepeated spending power so carpeting began appearing in homes of all types. Why NOT make the bathroom fuzzy and have it match the toilet toupee?

Why Did The Bathroom Carpet Trend Resurface? 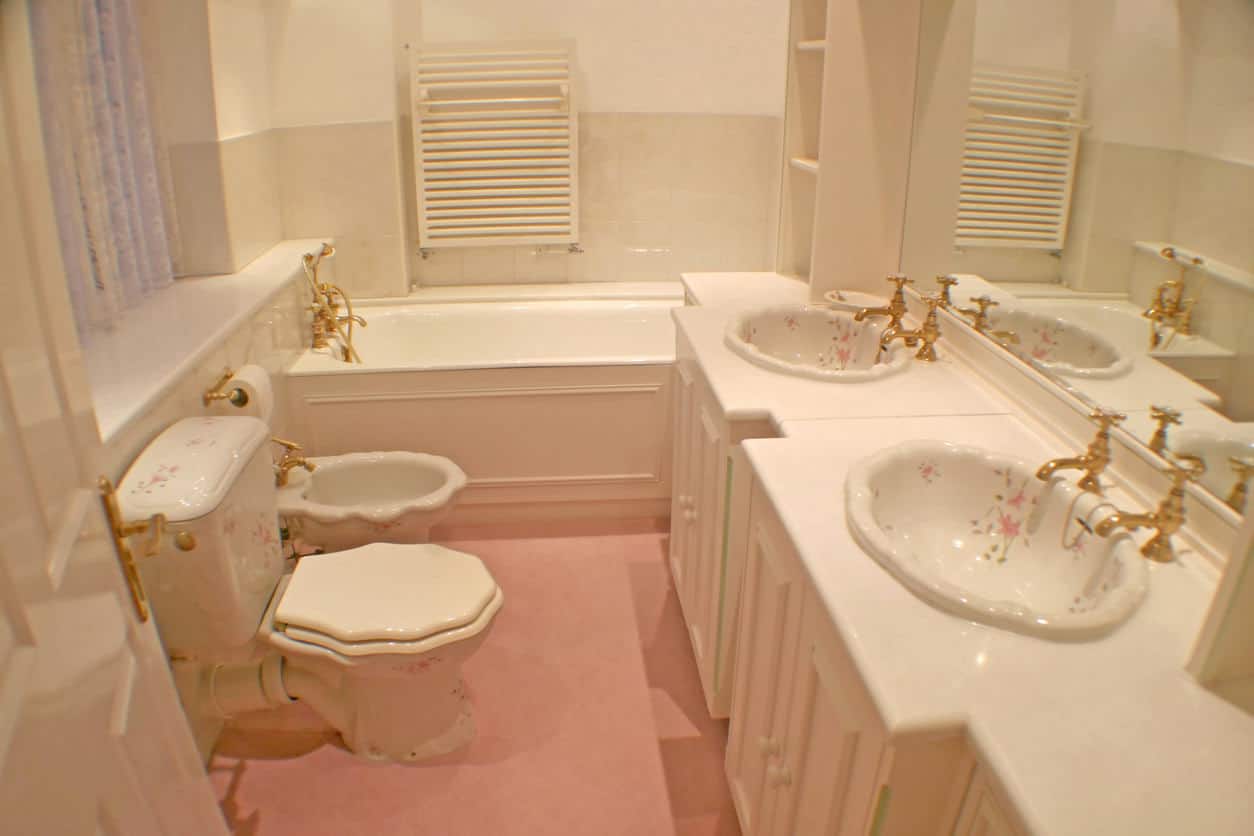 This nightmare is like a stodgy old tea set come to life…guess they chose the best room for this!

Most modern homeowners do not opt for carpeted bathrooms, or rip them out first thing upon buying a place that has it. They’re turned off by the mold risks or had a traumatic experience like I did when it came to toilets leaking through the bottom or overflowing through the top.

But some people are firmly in this “carpet the bejesus out of the shitter like there’s no tomorrow” camp. If not for the plush feel, because they have children or pets likely to slip on the carpet and don’t want accidents. Some co-op and condo apartments may have also have carpeting rules to dampen noise, and some, unfortunately, could have bathroom carpeting if there’s a minimum square footage requirement.

If you must have a carpet in the bathroom, The Spruce has a handy list of what NOT to do. Now if you’ll excuse me, us sane people have cute area rugs to pick out.