What's a better layout - open concept or closed walls? It's not as easy of a decision as you might think. There are pros and cons to both. This analysic breaks down what type of layout is best for a number of considerations. 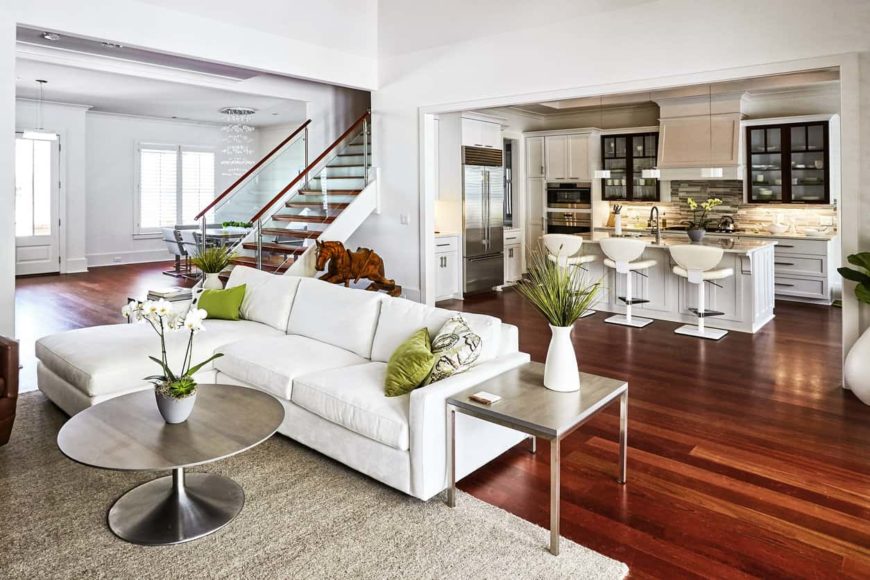 If you prefer to go with the trend, open concept it is.

Anyone handyman or contractor who can convert a house from closed layout to open concept can make a fortune. It’s a must-have renovation ask these days from many homeowners.

But, just because it’s popular doesn’t mean it’s the best layout for you and your home.

As with anything, there are pros and cons to both open concept and closed-in spaces separated by walls.

We’ve lived in both style of layouts. Currently, our home is not open concept. Our home before was fully open concept (as in one huge room with kitchen, living room and dining room).

Let’s address the 800-pound gorilla in the room right off the bat. What costs more, open concept or closed wall layouts?

The cheapest option depends on your starting point.

If you’re building a new house, open concept is likely cheaper but it also depends on what kind of support beams and ceiling you choose. If you have a huge space that requires extensive engineering and support, that could end up costing more than using walls.

However, if your open concept isn’t huge, chances are it’s less expensive than building walls.

And then there’s renovating to or from open concept.

According to fixr.com, it’s a tie. They estimate that adding the necessary support beams for open concept costs $1,000 and that building walls from open to closed costs about $1,000.

Open concept is brilliant for large gatherings of people. Even if the living room space does not have enough seating for everyone, people can remain in the same room while seated at the dining table and kitchen island.

The rest of the folks who didn’t score a seat can congregate standing up.

If you host parties, it avoids the “kitchen party” syndrome where a large group of people squeeze in the kitchen just because there’s room to roam. 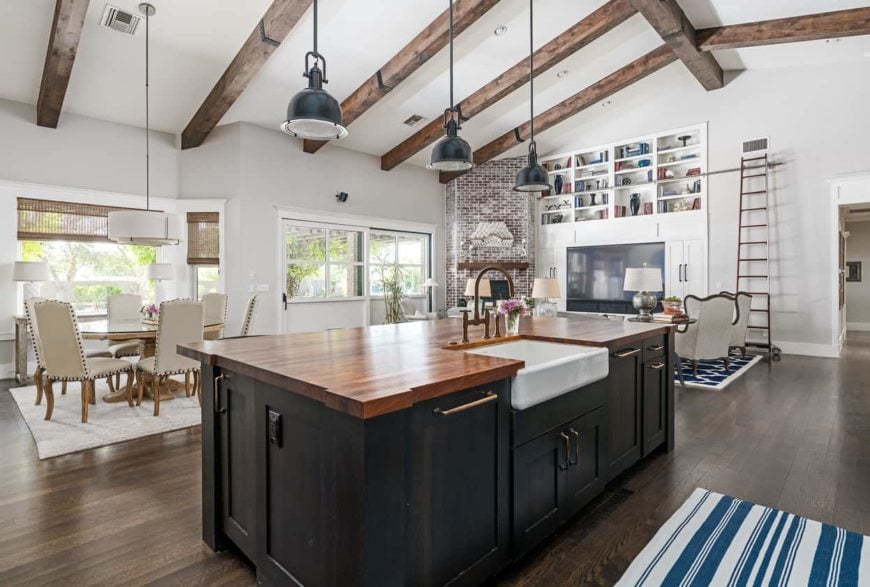 IMO, open concept provides for much better kitchen design. Specifically, it creates the space necessary for a large island which can be a great gathering space.

Our previous house had a huge island lined with 6 chairs. It was awesome. I miss that.

Closed-in kitchens often don’t have the space for a large island. 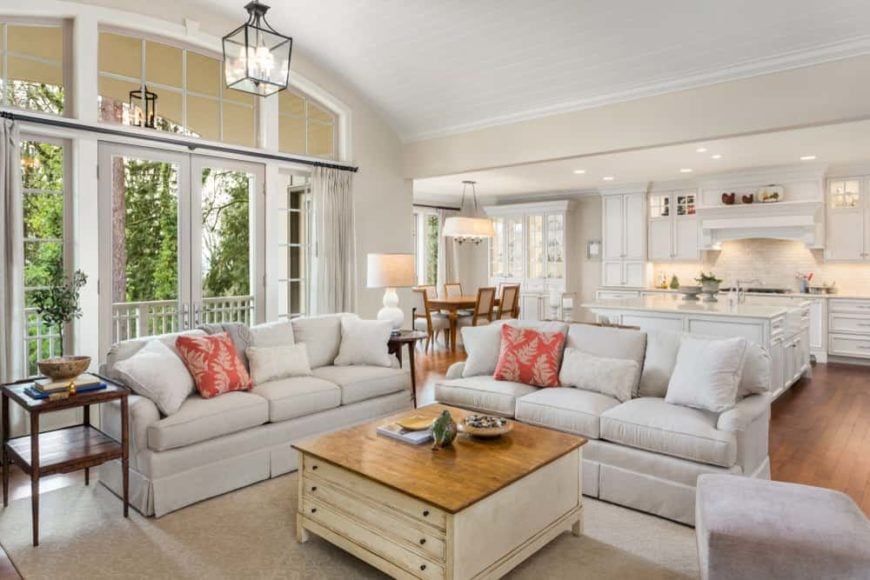 Open concept results in a brighter kitchen (brighter rooms in general) because the light flows through. Our current kitchen is dark dark dark. We always need a light on. We lament this.

On the flip side, a closed-in kitchen can be better for dinner parties. We’ve hosted many dinner parties and there’s something awkward about folks staring at you while you madly put the final touches on dishes. They also see the mess.

It can be a stressful time so worrying about also keeping the kitchen clean is the last problem you need. 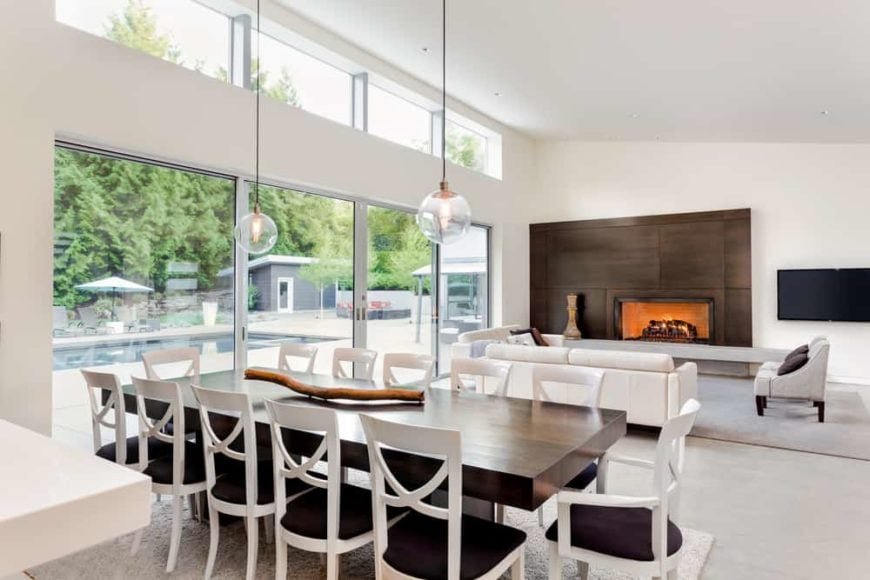 While a closed kitchen can be better for dinner parties, open concept can provide for a better actual dining experience.

A large space without walls offers the opportunity to extend dining tables or have a larger dining table permanently in place.

Fortunately, our current dining room flows into the living room so we can extend our dining table to accommodate 12 people, but if we had a closed-in dining room, that would likely not be possible.

However, our current dining table has a wall between it and the kitchen which limits space around the table making it difficult for people to get in and out of the room (for seconds and another drink). 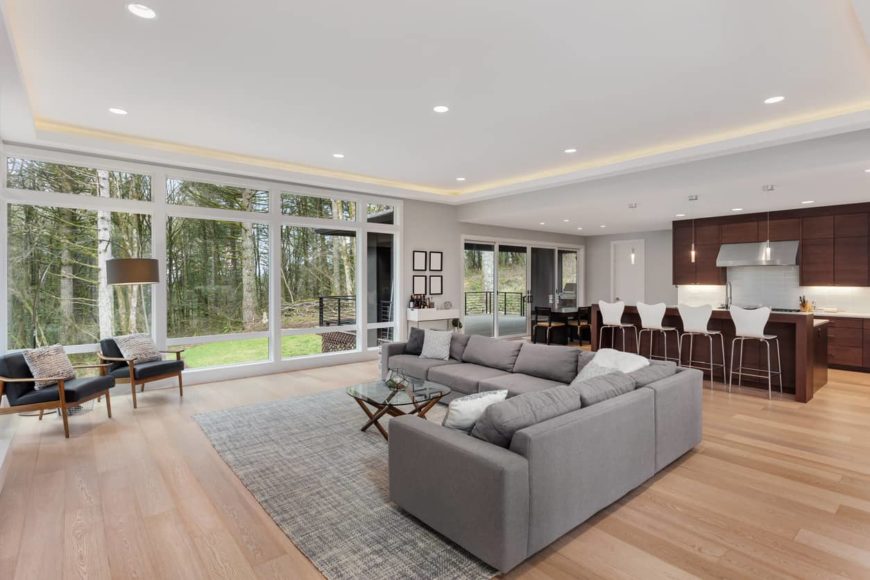 With open concept, you have more flexibility with the furniture you buy.

If you wish to allocate more space to the living room, you can. If you prefer more space allocated to the dining room, no problem.

This gives you the option to buy huge sectional sofas, more armchairs or a larger dining table.

Having options is always a good thing.

If you love art, photos on the walls and shelving, open concept may not be for you because naturally open concept provides for a lot less wall space.

You can’t adorn your dining room with photos of your ancestors.

Finding space for your prized Van Gogh is not as easy.

On the plus side, if you have one or two spectacular pieces, you enjoy it more in open concept because you’ll always see it.

Winner:  Tie. It depends if you have lots of art (closed is better) or a few priced pieces you want to show off (open is better).

If you have kids in the house and your main living space is one large space, you’re never alone. If someone is watching the TV, you have to hear it.

Everyone is always together and the sound is everywhere.

Together is great and I cherish those times but sometimes I prefer solitude with a book or reading the news. I don’t like spending leisure time in a bedroom.

This is where our current closed-off house layout serves us well. We have a totally separate living room from family room. We use both rooms. Often the kids play in the living room and we relax in the family room.

A feeling of space

I love the openness and grandness that open concept layouts provide. I like large rooms. I feel like I have room to move and stretch out.

Open concept delivers this in spades. In fact, this is one big reason that on the balance, I prefer open concept (despite currently living in a closed layout).

Because open concept is popular, if ever selling a house, you’re better off having an open concept layout because that’s what more people want.

Many folks want turn-key and wish to avoid a lengthy, messy, expensive reno.

If you can offer turn-key, you may be able to sell faster for a better price.

This one is a split.

On the one hand with a closed layout, it’s easier to restrict clutter to one room (until you get to organizing it). This results in the other rooms being neat and tidy.

However, what ends up happening is one room can become very cluttered. In our home this can be the dining room. We have a large dining table and during the busyness of the week, stuff piles up on it and around it.

With open concept, you can more easily disperse clutter. No single space is clutter free but at the same time no single space becomes a clutter zone.

With multiple rooms, you have to negotiate more walls with a vacuum, move the cord to different outlets and so on. It’s much more work.

With open concept, you can blitz through the entire space fairly quickly with a vacuum or whatever you use to clean the floors.

Obviously this is a personal choice, but I prefer the aesthetic and feel of open concept. Perhaps part of my preference is influenced by the current trend. Nevertheless, I love the look and feel of large, open spaces. 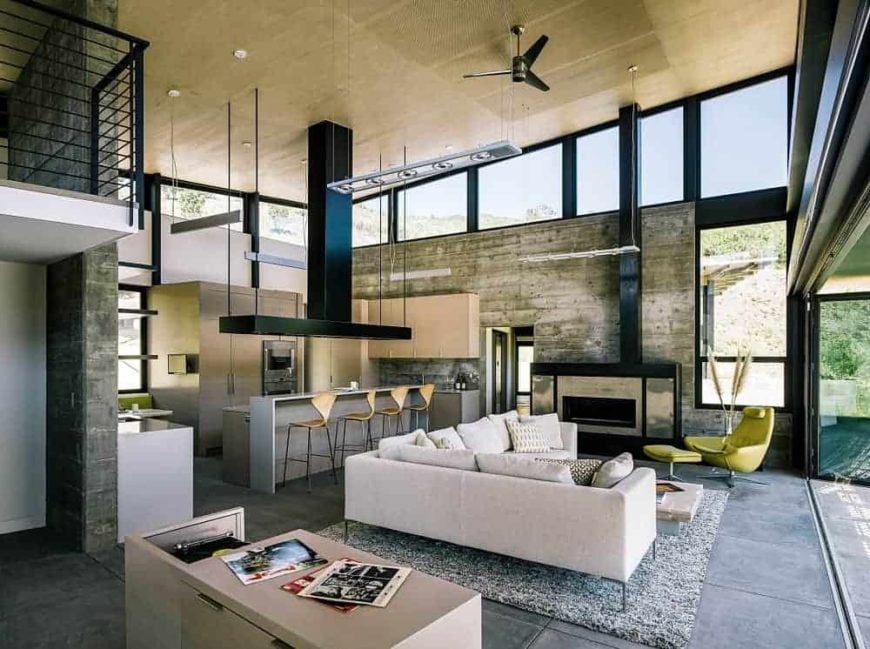 I love high ceilings and open concept is often (not always but often) accompanied by tall ceilings. This adds to my love of large, open spaces. It’s hard to argue that a regular 8-foot flat ceiling is more appealing than a soaring vaulted ceiling.

On the flip side, if your open concept space does have 8-foot ceilings throughout, it can give off the appearance of being too low for the size of the space. This can detract aesthetically.

If you love music, it’s easier to enjoy it throughout open concept than a closed layout. Yes, you can connect multiple speakers throughout multiple rooms, but that can be a drag and more expensive.

On the flip side, if you don’t care for music on all the time but live with folks who do, it’s hard to escape in open concept unless you hole up in a bedroom.

Winner: Open concept (as long as I like the music haha).

Typically, it’s easier to navigate an open concept house than a closed layout.

With a closed layout, you’re restricted by walls.

With open concept, you move freely.

This may sound like a petty justification for open concept, but ease of movement (flow) can make a difference.

If you have young kids that you need to keep an eye on, open concept can be great because you can see them at all times. It gives you a little more freedom.

It wasn’t that long ago we had a toddler in our split level house with 4 sets of staircases. We had more safety gates than kitchen appliances. While we set it up to be safe, there’s a peace of mind when you are in the same space as your kids when they’re crawling or stumbling around on young legs.

See also  What is Bohemian Style?

That said, unless you plan on have

Have your cake and eat it too

This way you enjoy a separate lounging room while enjoying the benefits of an open concept home.

The only thing you don’t get is the private kitchen when cooking for guests. You’re on full display.