The former home of cowboy’s All-Pro Deion Sanders is located at 1280 Preston Road in Texas, roughly 45 minutes north of Dallas in an affluent suburban town named Prosper. This mansion was built in 1999 by number 21. 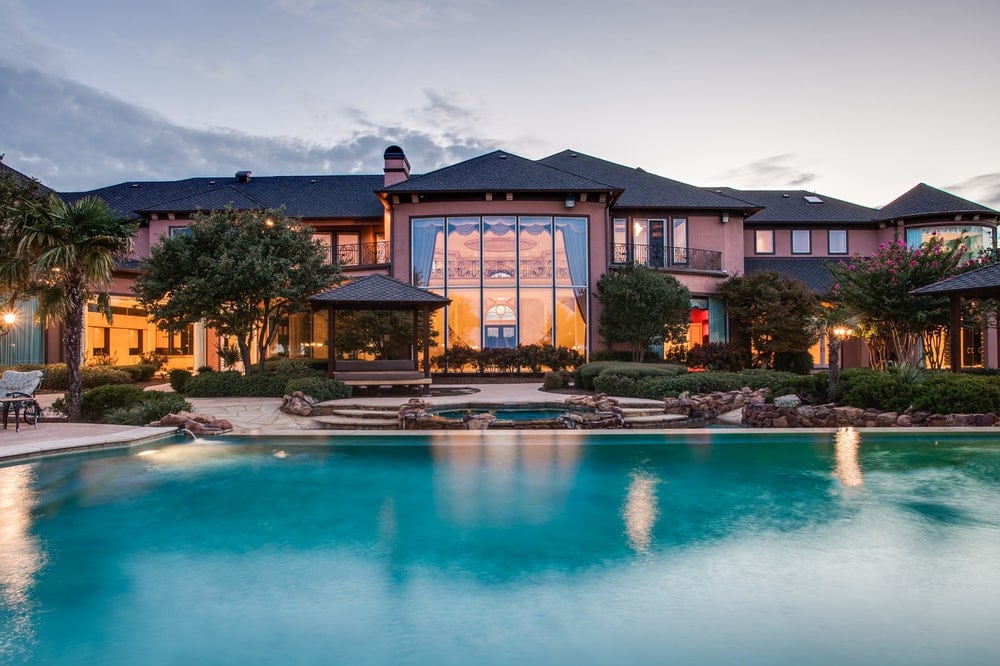 The former home of cowboy’s All-Pro Deion Sanders is located at 1280 Preston Road in Texas, roughly 45 minutes north of Dallas in an affluent suburban town named Prosper. This mansion was built in 1999 by number 21.

The Prosper, Texas, property was dubbed “Chateau Montclair” and when Sanders lived there it was a sprawling, 112-acres. The home where Deion raised his family is nothing short of royal with every amenity imaginable it truly lives up to the status of a marvelous celebrity home. 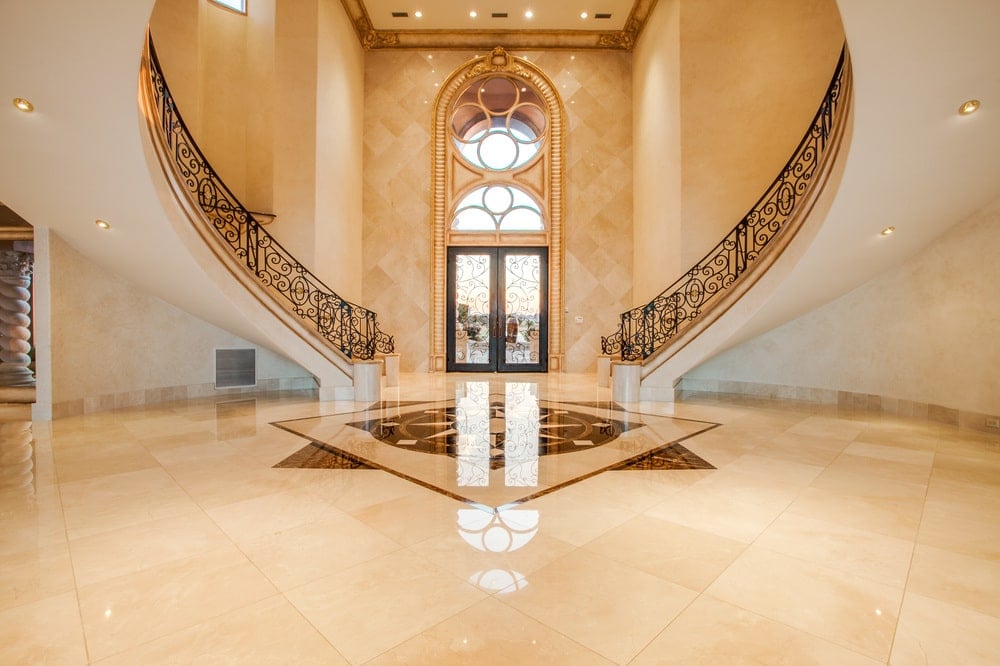 Upon entry of the mansion, you are welcomed by this beige marble foyer with a tall ceiling and a couple of curved stairs. Image courtesy of Toptenrealestatedeals.com. 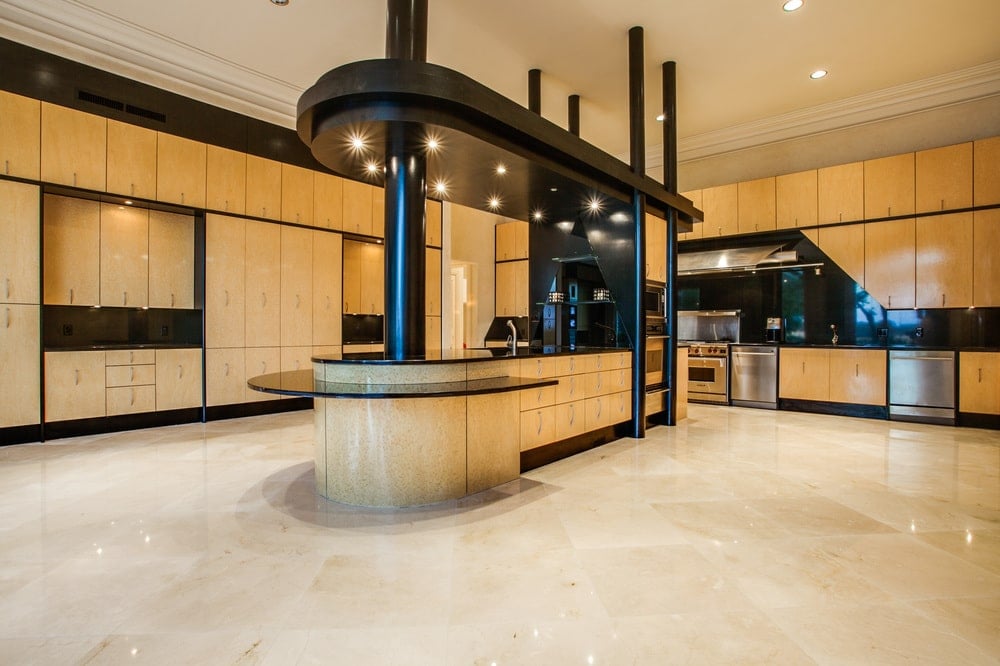 The large kitchen has a huge floor-to-ceiling structure in the middle that has an island, pillars and its own ceiling with recessed lights. This is then surrounded by cabinetry that matches the tone of the floor. Image courtesy of Toptenrealestatedeals.com. 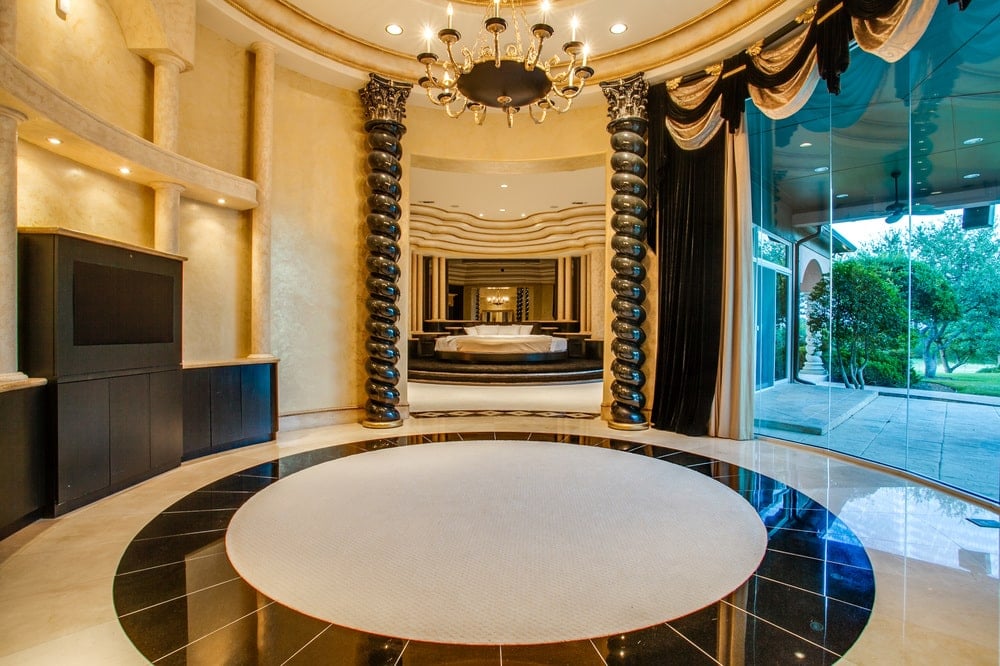 This is a look at the entryway to the primary bedroom with a large circular hall, tall ceiling, glass wall and a chandelier. Image courtesy of Toptenrealestatedeals.com. 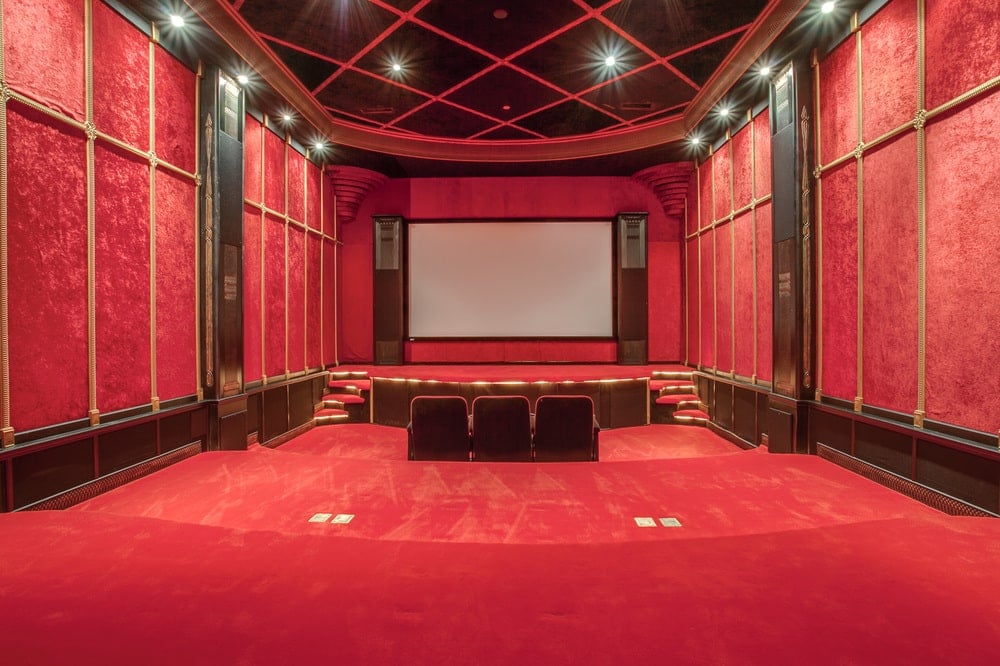 This is the home theater cinema of the house with vibrant red tones on the carpeted floor, walls and patterned ceiling. Image courtesy of Toptenrealestatedeals.com. 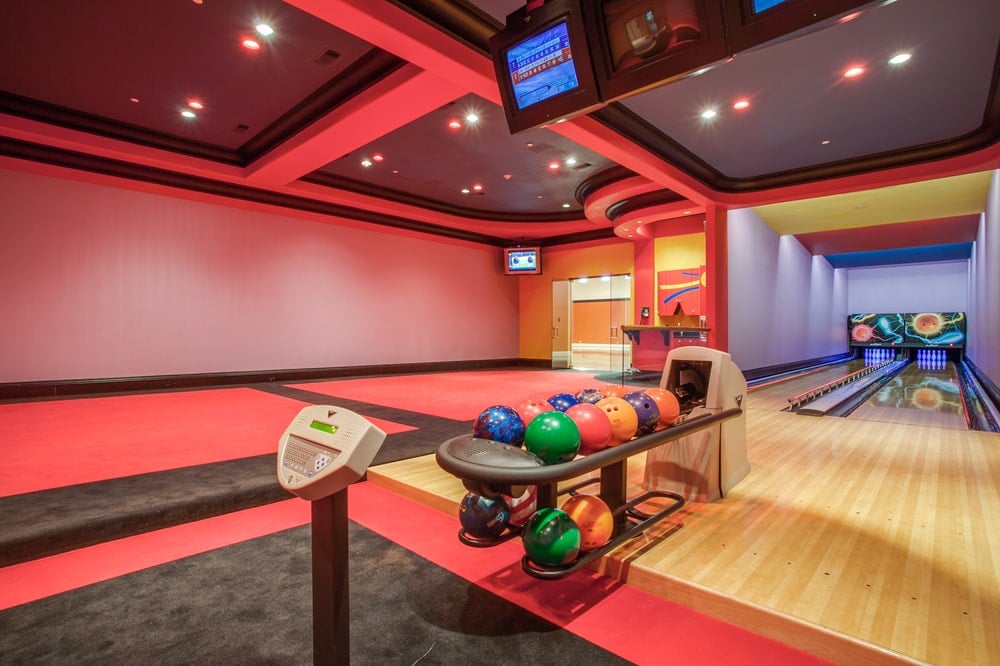 This is the bowling alley and arcade of the mansion with vibrant red accents on its floor, walls and ceiling complemented by the recessed lights of the ceiling. Image courtesy of Toptenrealestatedeals.com. 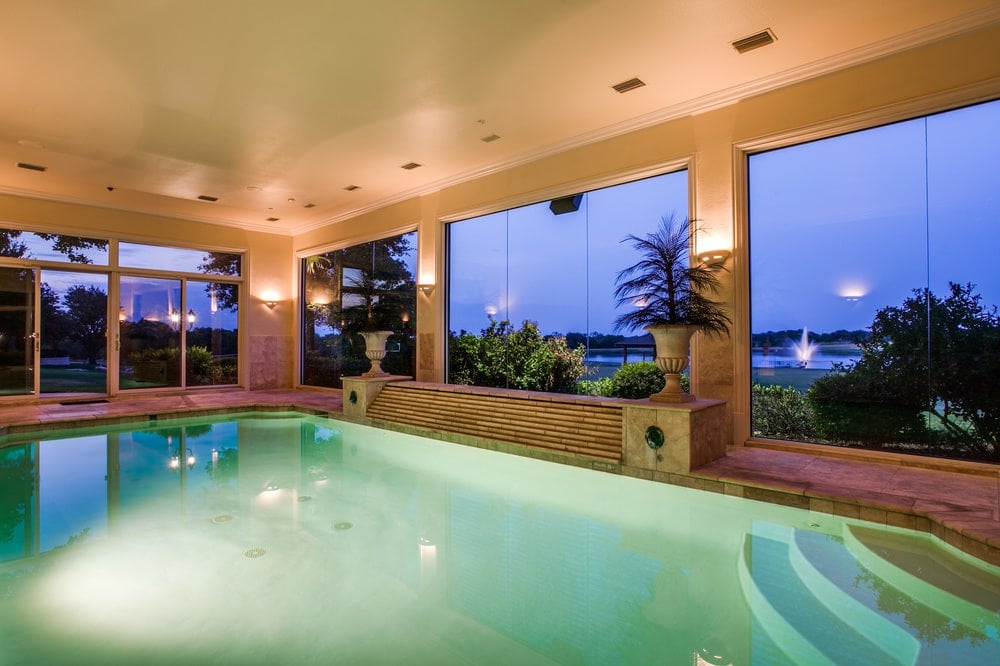 The mansion also has an indoor pool with glass walls adorned by sconces and planters. Image courtesy of Toptenrealestatedeals.com. 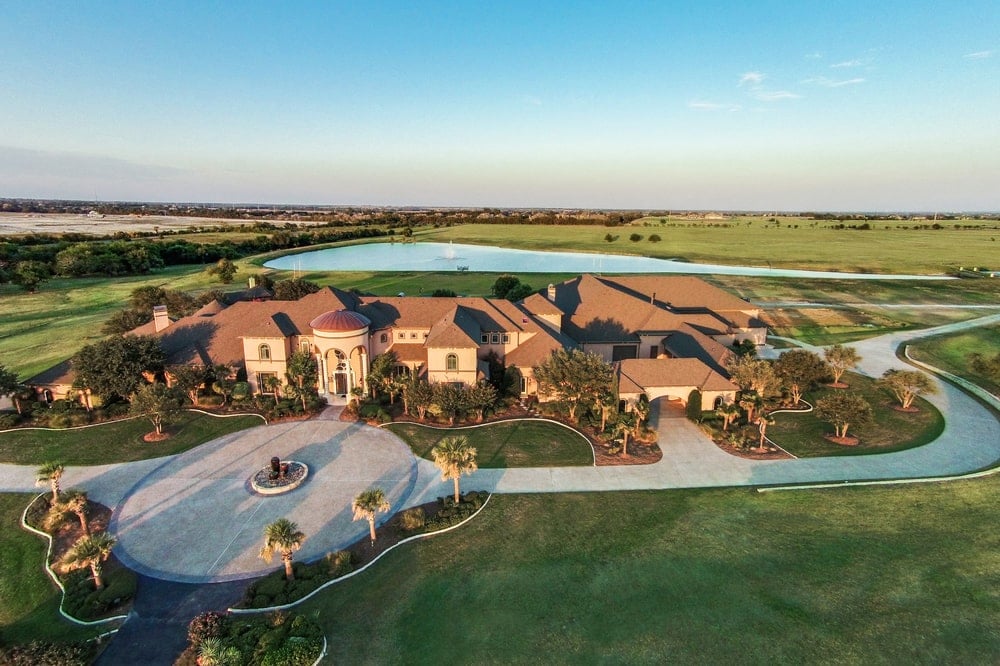 This is an aerial view of the mansion showing the large courtyard, lawns and pond surrounding the earthy exteriors. Image courtesy of Toptenrealestatedeals.com.

About Prosper, Texas: Where The Home is Located

They say the town is named Prosper for a reason: because this 10-bedroom, 10 bath house is one of the Texas town’s most high-end home listings. With an eight-acre lake housing a fountain and private dock, this house leaves little to the imagination.

Apart from the 10 bedrooms, 10 full and 3 half baths, the property features a dedicated entertainment wing that has a bowling alley, indoor basketball court, indoor football field, 3 swimming pools(lagoon-style, regular, and indoor), a theater, a barbershop, and a billiard room, an awards gallery, and custom trophy case.

Have You Seen The Kitchen?

Chateau Montclair also has a commercial-grade kitchen. One of the many highlights is the opulence master suite, which has a kitchenette, a huge 3,000 -square-foot custom closet, a fireplace and the master bath features a sink in sauna jacuzzi,

Not to mention the floor in the foyer to the master bedroom, that we hear is covered with beautiful carpet.

There’s also a sprawling 14-car motor court and additional bays that can accommodate a boat. Of course, a huge house needs upkeep and this one features housekeepers quarters and much more.

The interior design, lawns, gardens, and external features of the property are nothing short of palatial.

Why Hasn’t The Home Sold Yet?

For a home that’s this size, it has had its share of market challenges. Sanders listed the property for $21 million and sold the chateau in 2014, a real estate agent sued “Prime Time” Claiming he’d withheld $1 million from the sale which was a reported $15 million.

Public records indicate it sold again in 2016. Later in 2014 it almost sold for $4 when it was put on sale at an auction where there were eight registered bidders.

But the house did not sell, and a private sale deal was made later, It was then listed, removed, and listed again before going back on the market for $12.75 million.

Neon Deion’s property was picked up in a deal arranged by a Dallas developer Don Silverman. They planned to develop most of the land into upscale homes.

The original plot was divided into many lots and is now an upscale residential enclave called Montclair with a shopping center, and Prosper’s first Kroger, at the intersection of Preston Road and Prosper Trail Road.

This leaves the original Chateau Montclair, the once blue, now sand-pink stucco mansion about six acres of land.

Back on The Market

Regardless of its color or past troubles with selling, this impressive mansion is still a sizable private estate. It saw a spate of price reductions during its for-sale time. Now the Dallas Cowboys star’s onetime Texas mansion is back on the market, in January 2020,  it was marked down further by $1.8 million.

Its current list price is a mere $5.75 million. Once the mansion was all you could see driving up to it however now the new owners are going to have some new neighbors, the mansion now has an entire posh community of 25 high-end homes built around it.

Multi-talented and versatile Deion Sanders is a famed professional star playing multiple positions in 2 major sports, football and baseball. He started out at Florida State University as a baseball, track and football going on to play pro baseball for the Atlanta Braves, New York Yankees, Cincinnati Reds and San Francisco Giants from 1989 to 2001 while simultaneously playing pro football for the Atlanta Falcons, San Francisco 49ers, Dallas Cowboys, Washington Redskins and Baltimore Ravens from 1989 until 2006.

In his career in the NFL, he played mostly at cornerback, but also occasionally as a wide receiver, kick returner, and punt returner. He is the first person to hit an MLB home run and score an NFL touchdown in the same week, and the only person to play in an MLB and NFL game on the same day) being inducted into both the College Football Hall of Fame and the Pro Football Hall of Fame.

He has also dipped his toes in music and has been a frequent TV talk show guest, as well as Saturday Night Live host. He also had his own reality TV show and was even the emcee for the 2002 Miss USA Pageant. He has worked as a football analyst for CBS, ESPN, and the NFL Network.

After retiring from active sports at the age of 39, he has continued as a sports commentator for major networks. In recent years he has turned to religion working to mentor troubled youth.

He established the TRUTH Youth Academic & Sports non-profit organization. Helping kids through sports, engaging them in his football, baseball, cheerleading, and track leagues helping thousands of children in the Dallas area.

Owing to his huge success in all fields, he has built several properties, most recently in August 2019,  selling his magnificent  5,000 foot, downtown Azer penthouse for $4 Million to the founder of Fischer, Clifford Fischer who currently serves as the chairman and CEO of Fischer.

Currently, Deion Sanders is building in DeSoto. Surely he has believed in himself, his talent and in everything, it takes to make the empire he has just like the inscription on the basketball court in Chateau Montclair, “You Gotta Believe”.

Despite having multiple properties, none of the homes have been of the palatial stature of the Chateau Montclair, knowing it’s the current listing price, surely someone is going to pick up the extravagant home in which Deion raised his five children and make it their own erm-not so humble abode.