Vacuum cleaner magnate H. Earl Hoover acquired the largest residential property in Chicago in 1926. He lived happily in the mansion with his third wife Miriam until his death in 1985 at the age of 94, and she owned the mansion until her death at 104 in 2018. But family division may lead to the demolition of this exquisite house. 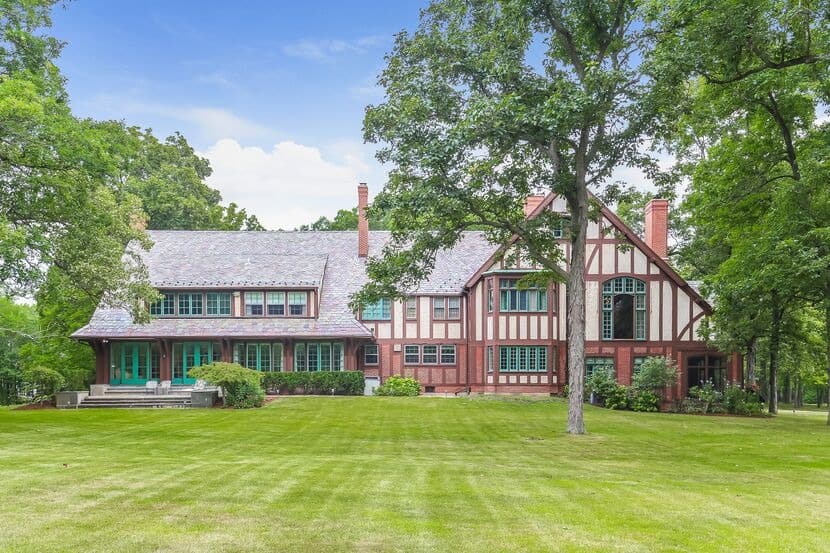 Whimsical. Magical. Just stunning. Those are some of the words the new owners of the mansion once occupied by the Hoover family of vacuum cleaner fame have used to describe their new property in Glencoe, Illinois, just outside Chicago. But they are reported to be planning to add the description “Demolished” to this storied old home.

A Mansion Befitting a Household Name

For much of the twentieth century, the name Hoover was synonymous with vacuum cleaners. The vernacular term for vacuuming was “hoovering.” The term “hoovering” was also associated with gathering up lots of cash.

In the early 1900s, an asthmatic janitor named Jerry Spangler combined a fan, a soapbox, and a carpet sweeper to make the first household vacuum cleaner. He sold his idea to his Hoover relatives, who popularized vacuum cleaners throughout the United States and Europe.

The nephew of the found of the Hoover Vacuum Cleaner Company, H. Earl Hoover, bought the largest remaining residential lot in Cooke County, including Chicago, in 1926. His widow’s estate only offered the property for sale for the first time in 91 years in 2017.

The Hoover Family Mansion sits on 12.22 acres, still the largest private residential lot in Cook County. The main house is 10,000 square feet constructed in the Tudor style, at the end of a private road, behind iron gates.

The Hoover family “studio” is a great hall with 12-foot windows and two-story cathedral ceilings. The “sunroom” features floor-to-ceiling windows overlooking the south lawn and one of the gardens. In addition to the main home, the property features living quarters for 12 servants, and a greenhouse, coach house, and stable house covering an additional 3,000 square feet. Carefully maintained for over 90 years, the main house and outbuildings feature slate roofs and copper gutters. There is an eight-car garage.

Located on Greenbay Road, the Hoover Family estate was offered for the second-highest price of any residence in Chicago or Cook County — $15,900,000. But a long history of family division drove down the eventual selling price and may have doomed the estate to demolition.

Will the family division set the stage for demolition?

And four years before his death, Earl had disinherited one of his stepsons by his second wife. The stepson kept the estate in litigation for many years before the courts eventually awarded ownership of the house to Miriam.

There is no family to maintain this grand old house. The house sold in 2019 for $10,000,000, nearly six million dollars below the asking price, and there are rumors that the unidentified buyer intends to tear down the house to build a subdivision.