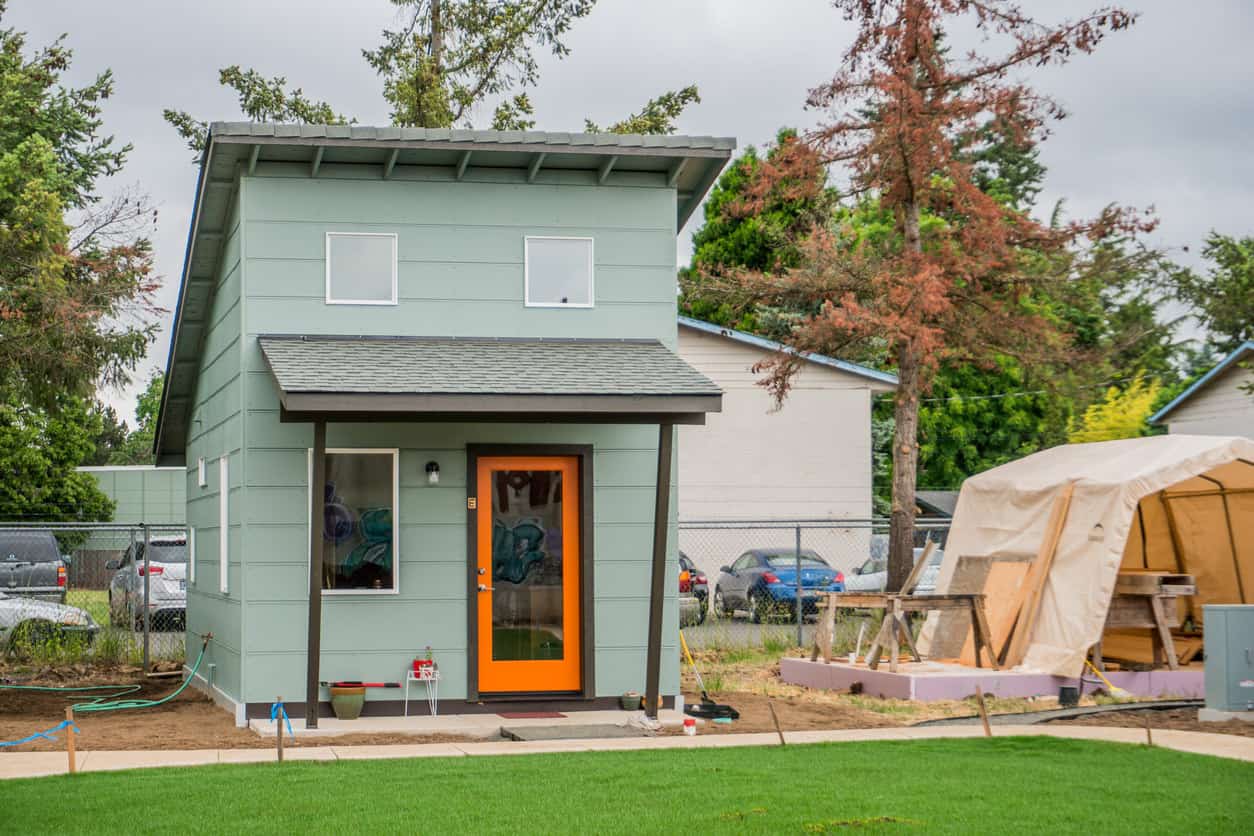 Tiny houses have caused quite the uproar in recent years. They’ve been touted as ecologically efficient and even fairly mobile if you’d like to move or travel. Amazon is selling prefab tiny houses and other companies are starting to follow suit as a solution to housing costs spiraling out of control while incomes don’t stretch as far as they used to. With a growing number of Millennials looking to put down roots, plus Boomer and Gen X empty-nesters looking to downsize, tiny houses have been popping up all over America.

Tiny houses have been lauded for minimalists, frugal home buyers, and as a means of providing shelter to the unhoused in a cheaper and safer manner than the shelter system. But they’ve also I honestly think they’re a symptom of something wrong with American home building: if you don’t want to live in an apartment, why are your only choices a massive 4-bedroom honker or a cottage with wheels no bigger than a room at an Extended Stay Marriott? 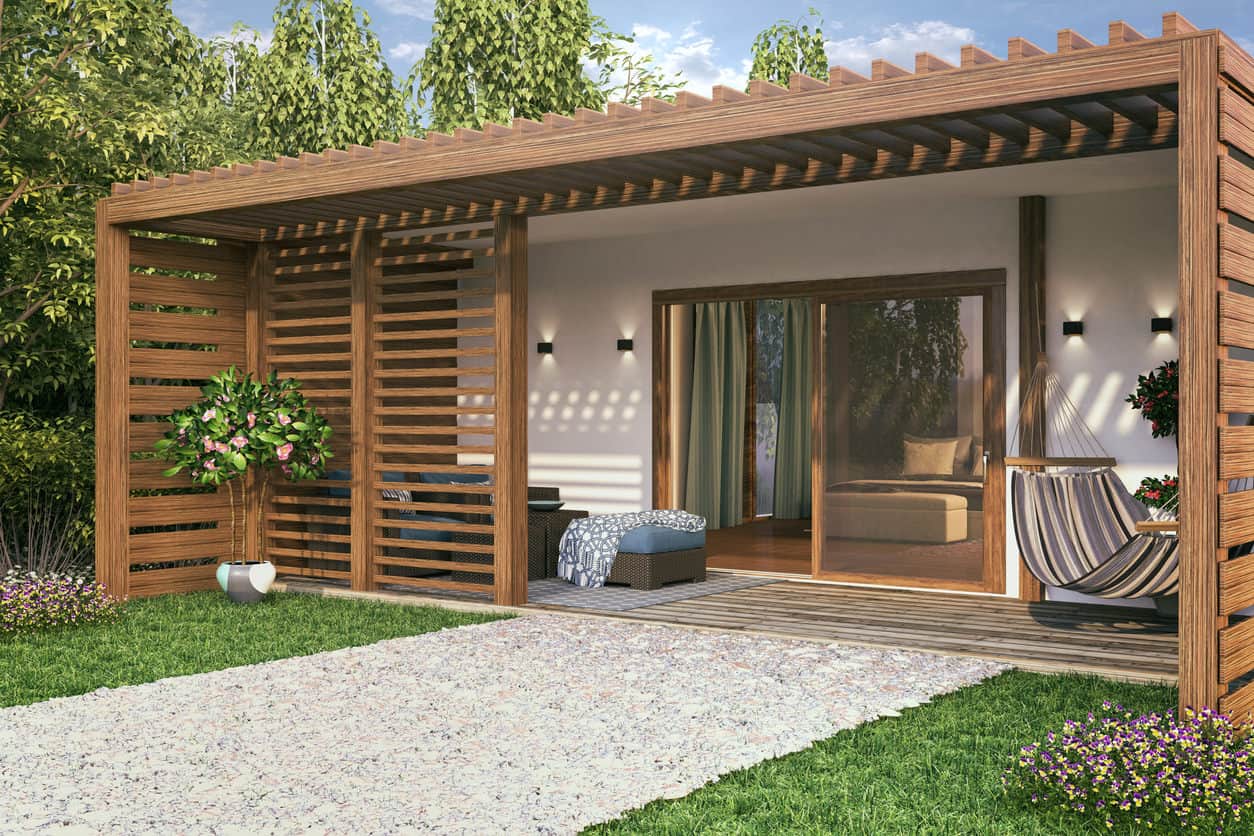 Tiny houses get lumped in with trailers, RVs, and mobile homes, but there’s actually different criteria that sets tiny houses apart from them. For one, tiny houses don’t have to have wheels. People opt for wheeled models for the dual purposes of facilitating travel and moving, plus making local ordinances concerning minimum square footage for new homes difficult to enforce. Tiny houses have a more intricate building process that calls for higher-quality materials and stronger insulation than what mobile homes and RVs offer. The latter is designed for frequent long-haul travel while tiny houses aren’t meant to be moved as often even though they can be transported in a similar fashion.

Tiny houses or Jamie Buys Houses on foundations have more in common with single-family homes than mobile homes except for typical square footage and the fact that they’re usually built to the owner’s specs instead of whatever the builder wants. Some tiny house owners want little cottages in the woods while others opt for mini versions of those sleek and ultra-modern condos that have neon exteriors. This one looks like a Nintendo controller! 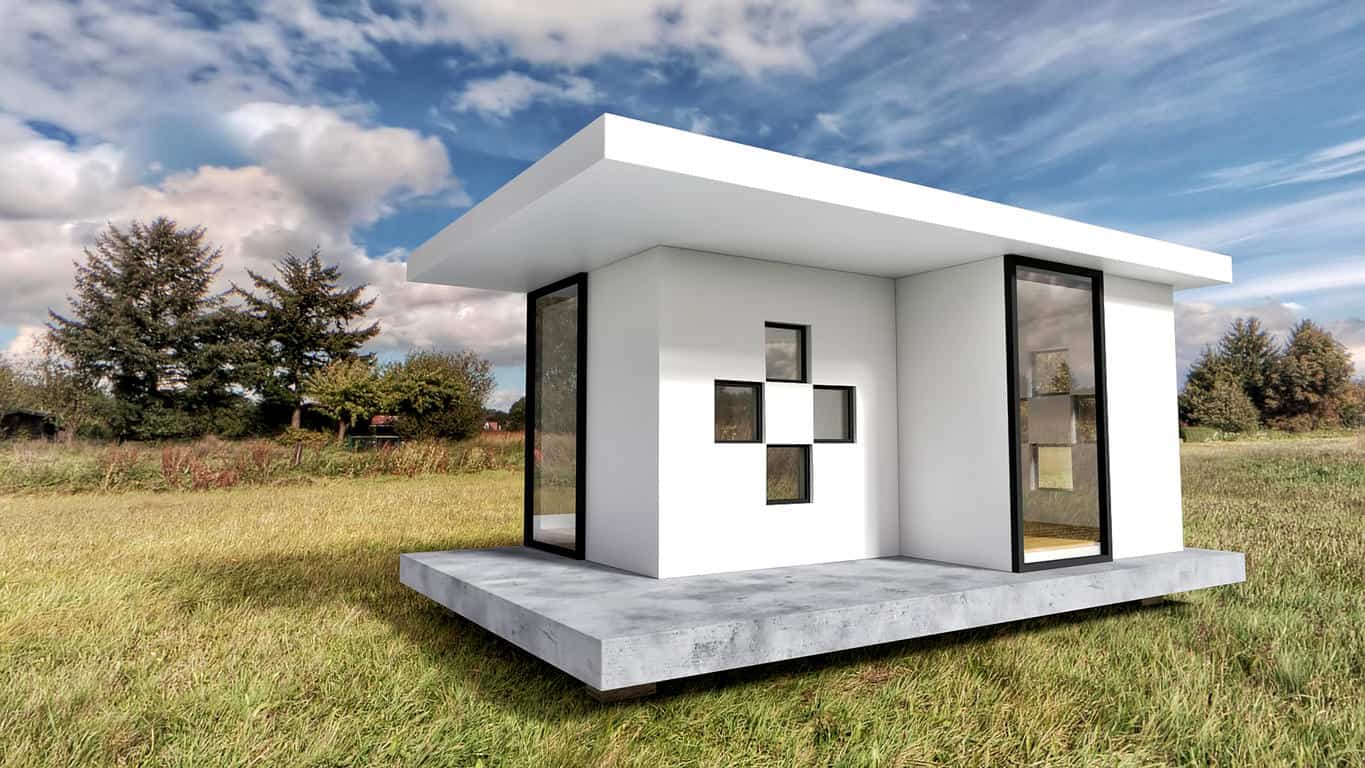 Press A to open the door on the right?

They’re smaller than most studio apartments, topping out at about 400 square feet and some even being as small as 100 square feet. This results in building materials costing as little as $5,000 and up to around $60,000 to really put thought into every inch of scarce space. Subsequently, 68% of tiny house owners don’t have a mortgage because they’re so cheap to build or buy prefab.

Despite these differences, tiny houses have been mocked with the same classist derision that trailer parks and mobile homes have bore the brunt of for decades. People wonder why you’d buy something that’s essentially a hipsterized trailer with a prettier interior brought to you by West Elm instead of Wal-Mart. Much of this is chalked up to the sneering one faces for not falling in line with the “get a house in the suburbs, perfect spouse, and 2.5 kids or you’re not SUCCESSFUL” paradigm in whole or part. But to be fair, the tiny house movement deserves some of the criticism lobbed at it when owners do things like keep a German shepherd cooped up in a 300 square foot house that barely has room for two people. While there’s plenty of good things to be said about minimalist lifestyles and how freeing they can be, it’s also not for everyone. Hell, minimalism requires more privilege than you’d think.

But in the millions of articles we see on a daily basis about how Millennials can’t afford traditional single-family homes in the suburbs, the lifestyle aspect hasn’t been reported on enough. Some of us would rather buy apartments or opt for tiny houses among other types of cheaper and more environmentally sustainable living. Lifestyle matters more to some home buyers than space does, it definitely does to me as I’d rather have a one or two-bedroom condo in the city where I can walk to public transit and everything I need than tons of space in a suburb where I’d have to drive.

Although there is another thing going unsaid: what happened to starter homes? Why did new homes get bigger and bigger until the balloon popped, and now a home foundation can practically fit on a Ritz cracker is in vogue? 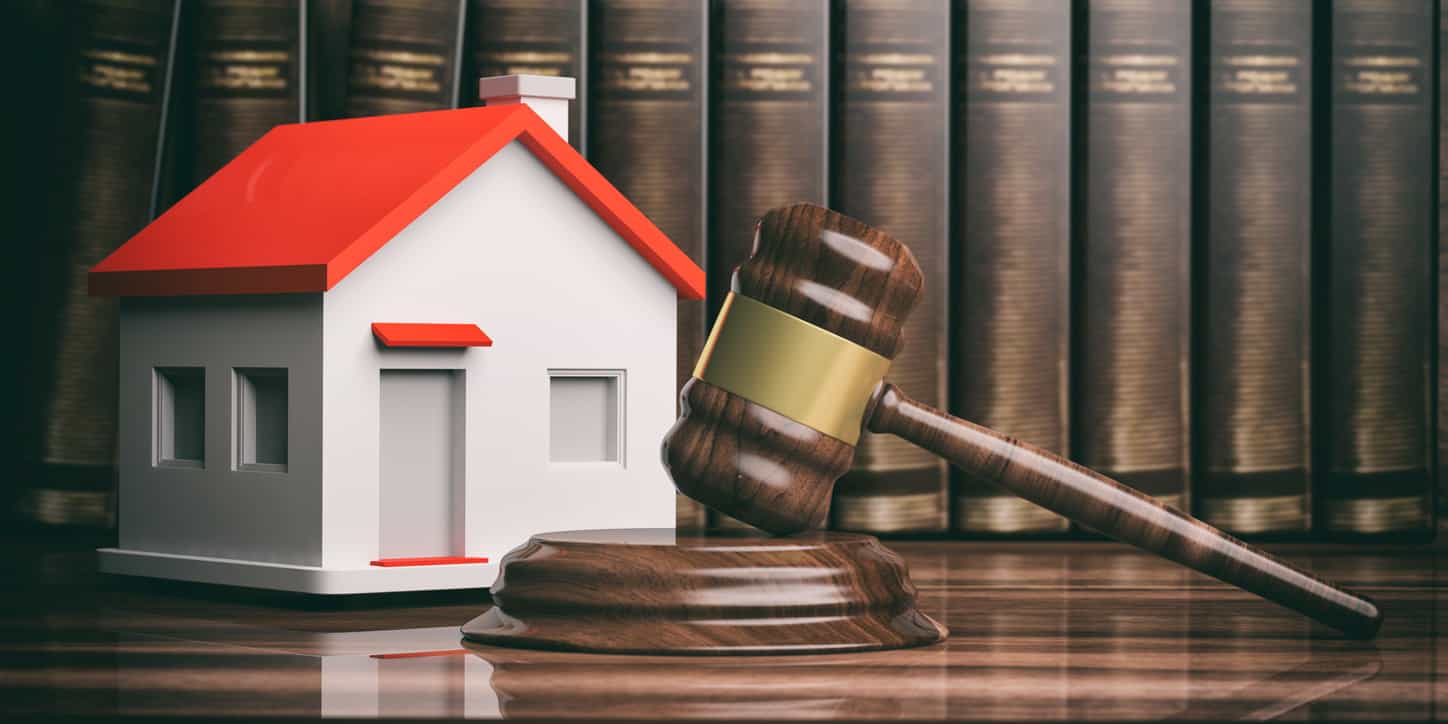 One of the largest snags that the tiny home community has run into is complying with local ordinances. Many find a way around it by putting their tiny houses on wheels instead of a real foundation so it can be considered a mobile home. But zoning boards don’t have a lot of love for tiny houses or pretty much anything that’s not your average energy-guzzling single-family home or obnoxious McMansion.

There’s a million reasons for this. Property tax revenue is a huge one, as the aforementioned property types will generate far more tax revenue than a dollhouse that resembles a shipping container. The same is true of apartment buildings as their collective taxable value also leverages that risk across many homeowners in the same place. Zoning boards also figure that the bigger house you have, the more that they can squeeze from individual homeowners when it’s time for assessments like upgrading sewer lines and repaving streets. Every subdivision does this differently, and ones that have homeowners’ associations may shoulder part of these assessments. If you’re on the hook for the whole thing? That could be the same or even way more than your annual property tax bill although fortunately they don’t happen as frequently.

It’s an utterly byzantine mess that Planning.org has been tracking for decades. If reading old urban planning documents isn’t your idea of light bedtime reading, I’ll TL;DR it for you: county then subdivision boards often don’t like it if you try to build or commission a freestanding structure that is under 1,800 square feet. However else will you celebrate consumer capitalism by filling a huge house with tons of crap you won’t use?!

This came from the Tiny House Society, they make a good point here.

So you want a house, you’re tired of living in an apartment that entails regularly being subjected to your upstairs neighbor practically having sex with his furniture. Having more space than a tiny house would be amazing, the whole point of why you’re sick of apartment life is not having room for anything and you swore that the love of your life who moved in with you is plotting your death as a result of completely lacking space for both of your sets of things that accumulated by your early thirties. Maybe you’ve got hobbies requiring more space than you currently have, or you’re self-employed and dream of having a workspace that’s separate from your personal space. So you (or you and your significant other) explore having a smallish home built since the homes for sale in the area you love are too big and expensive. You’re puzzled because countries other than America exist in the world, single-family homes across the pond are more like 900-1,200 square feet. Rooms are smaller and not meant to store the equivalent of an Amazon distribution center.

So you find a plan and builder you’re happy with. But the HOA where you’re looking to buy isn’t going to be pleased even if your blueprints satisfy the local zoning board’s minimum square footage requirement, so you’re back to square one.

You’d think that nosy HOAs would be totally fine with a smaller house being built on an empty lot or taking the place of a condemned property. After all, Ralph and Alice down the street with their gargantuan SUVs plastered in honor student bumper stickers grudgingly brought home by kids who quietly hate them? Please, they’d WANT to brag about how they have a bigger and more expensive house than their new neighbor! After all, why NOT have more single-family homes on the small side built? A home that’s about 1,000 square feet would be plenty of sprawl for a girl and her toad, or perhaps a couple that doesn’t plan on having kids though slightly larger families comfortably live in housing this size around the globe. 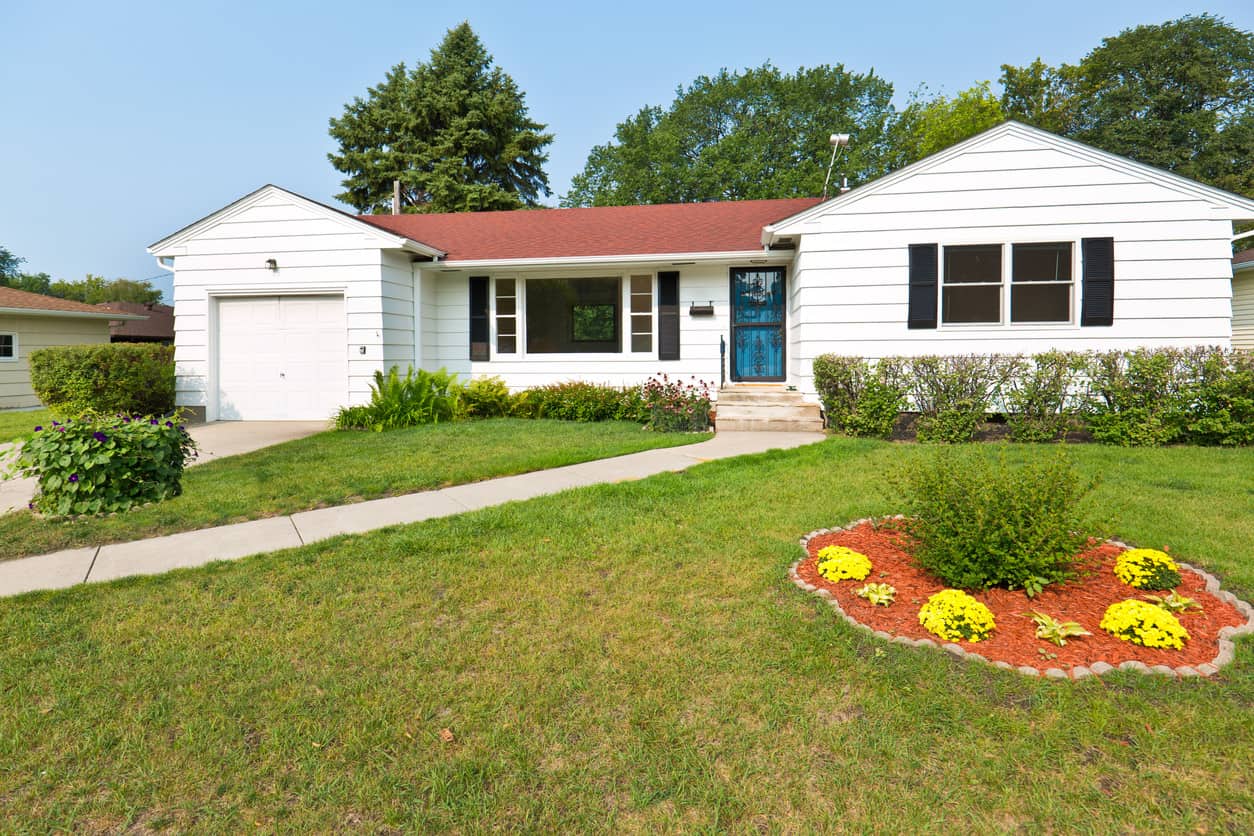 Houses that AREN’T hulking behemoths can exist?! Why can’t we have nice things?!

While tiny homes have specific criteria to meet like being 400 square feet or less and are usually bespoke designs or complete prefabs, “starter homes” don’t have any attributes that uniquely define them as such. The term was coined in a more prosperous point of American history when rich people were actually taxed and we had a strong middle class, so buying real estate was something people reasonably expected to do at least twice in their lives. Starter homes aren’t confined to a specific square footage, location, or property type but the term is most often associated with freestanding condos, condo and co-op apartments, and small detached houses like ranchers. Given how wildly property values vary and fluctuate, price doesn’t always distinguish a starter home from a forever home. After all, you can pay $400,000 for a nice-sized house in the Bronx or New Jersey but just a few miles away in Manhattan that doesn’t even buy you a 500 square foot studio in Manhattan.

One person’s starter home can be another person’s forever home, especially if their household size never expands due to marriage, children, taking in elderly relatives, or starting that queer communist game developer hut we’ve all dreamed of. Nevertheless, the term has regained popularity among Millennials longing for options to buy small houses that aren’t “studio apartment with exterior walls” or “huge house that will suck up my entire monthly income to maintain”. Houses don’t NEED to be as big as builders and zoning boards keep telling people to make them. Given that the planet also doesn’t have long before it resembles a Bagel Bite that got jammed in the back of the toaster oven, we also need to ask why urban planners aren’t pushing for higher density and reduced minimum square footage in building new homes. Corporate polluters may be the biggest culprit in our predicament, but it would certainly help things if we were given more choices than a thimble-sized cottage where you can touch your bed from the toilet and these mammoth McMansions that are kitchen sinks of terrible design decisions.

Tiny houses have gotten all the attention in the discussions on the housing crisis because they’re an easy target. The “tiny houses are stupid” takes have been done to death. I personally see no appeal in climbing a ladder to get in and out of bed inside something smaller than my first studio apartment, but think it’s pretty cool that people have found unique ways to sidestep massive mortgage payments and egregious rents. But how do we approach a happy medium of questioning the status quo, satisfying our need for housing security, wanting to consume less, and have more environmentally sound choices when it comes to housing?

Housing eats up a ludicrous portion of most Americans’ incomes and the financial industry did a bang-up job of encouraging people to mortgage more house than they really need. Every home buyer has different needs, and some people are happy with these 2,000 square foot lots that they can make into their personal castles. Others are keen on downsizing and using their new set of wheels to see more of the country without ever needing to book a hotel.

Tiny houses are just a Band-Aid for the affordable housing crisis, but we also don’t have to build THAT small. More apartments would also be swell, but we need more starter homes that will happily become forever homes.