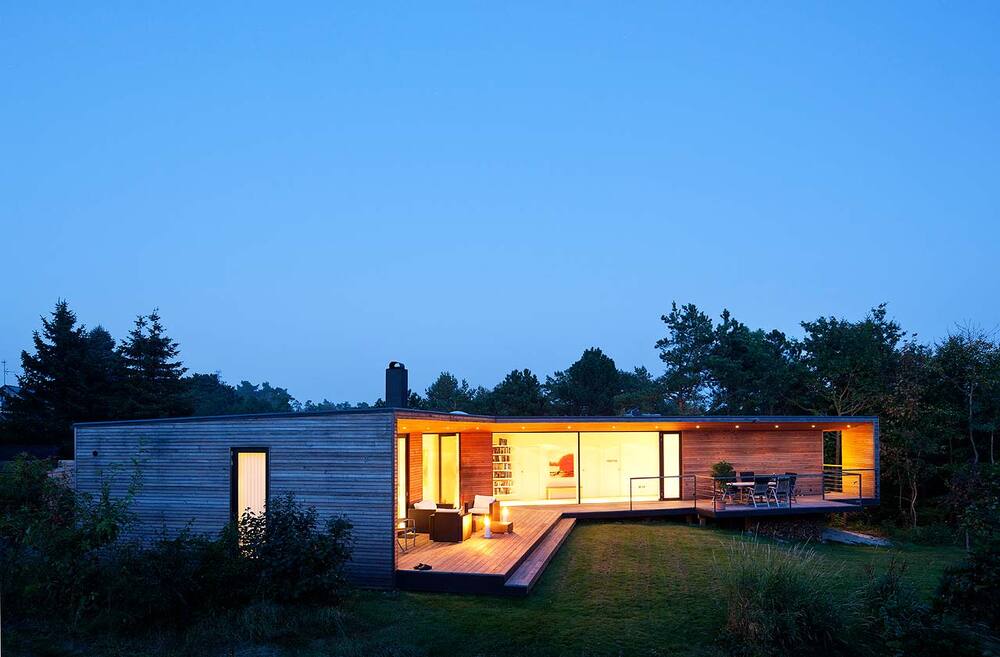 The coastal town of Beddingestrand, situated between Ystad and Trelleborg on the southern coast of Sweden, is dominated by the sea, sand, and forest. The winters are bitter cold and the winds fierce, and the summers are sultry. Rows of cottages for year-round residents and seasonal guests fill the forest in Beddingestrand.

The people of Beddinge greet their neighbours; children run on the paths between plots that are rarely demarcated.

The house is situated on the elevated former shoreline, where it enjoys a panorama over the sea and surrounding nature. The experience of the elements is amplified when the flora retreat in winter. While the elevation allows for a survey of the area, the house itself yields to the forest that stretches along the coast.

Two slender structures at an open angle create a vista, as well as offering privacy and protection from the biting winter winds. The interior wall of the house’s atrium is principally glazed with aluminium framing. The eaves are nearly invisible by virtue of tapering rafters.

The façade is clad in planed larch panelling with graphite-coloured metalwork. The foundation is a concrete slab, surrounded in turn by a painted expanded clay aggregate wall. The frame is wood with steel beams, and the roof construction of profiled metal sheets with insulation boards requires no cavity, which would bring the risk of saltwater corrosion.