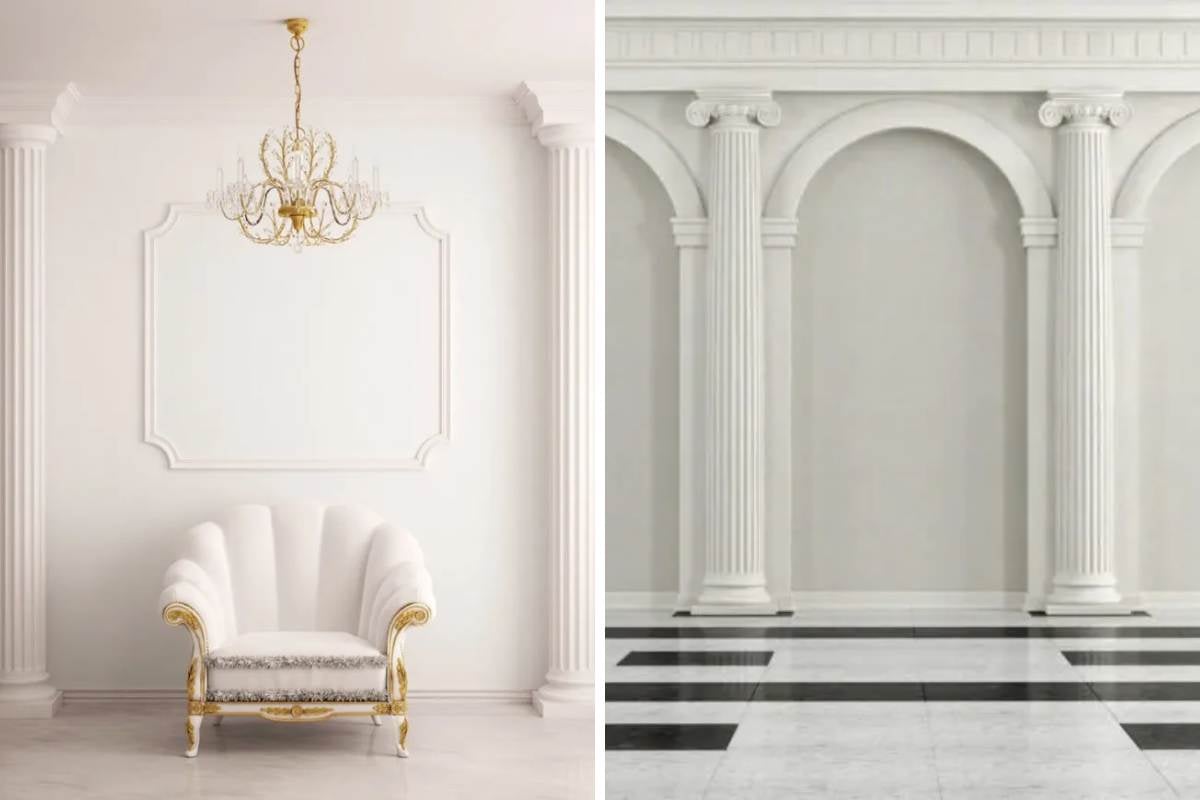 Ever fantasized about living in the same place where you hosted your wedding, or perhaps a federal bank or government building? Maybe you want to bring the painfully ostentatious atmosphere of The Cheesecake Factory to the comfort of your own home where you can easily replicate that War and Peace sized menu with any given delivery app? Guess what, you can achieve the same effect by putting up tacky decorative columns RIGHT IN YOUR HOUSE!

Whose idea was this? Decorative columns in structures have been around for centuries, but when it comes to North American houses in particular the whole “Greek god” aesthetic was really on trend in the 70s. After all, the generation that grew up on swords and sandals epics and had movie sets chock full of Ionic columns firmly stamped in their minds.

Ergo, someone really thought that trying to turn their living room into the Parthenon was the pinnacle of interior design. And I get that “a man’s home is his castle” was the mantra back then, so it only makes sense that you wanted things to be as castle-like as possible indoors. That mindset essentially gave birth to the human centipede of housing known as the McMansion.

While those didn’t descend on subdivisions like kudzu until the mid-90s or so, that itch for decorative columns apparently never got completely scratched and persists to this day.

Table of Contents Show
Who Put These Columns Up in the First Place?
But is it Really Something You Want in Your House?
Pick your poison

Who Put These Columns Up in the First Place?

Historically, columns were a structural necessity. Most people are likely the most familiar with Greco-Roman architecture where columns were featured prominently in both residences and public buildings like temples, statehouses, and other structures where the columns were needed to hold up ceilings and roofs. 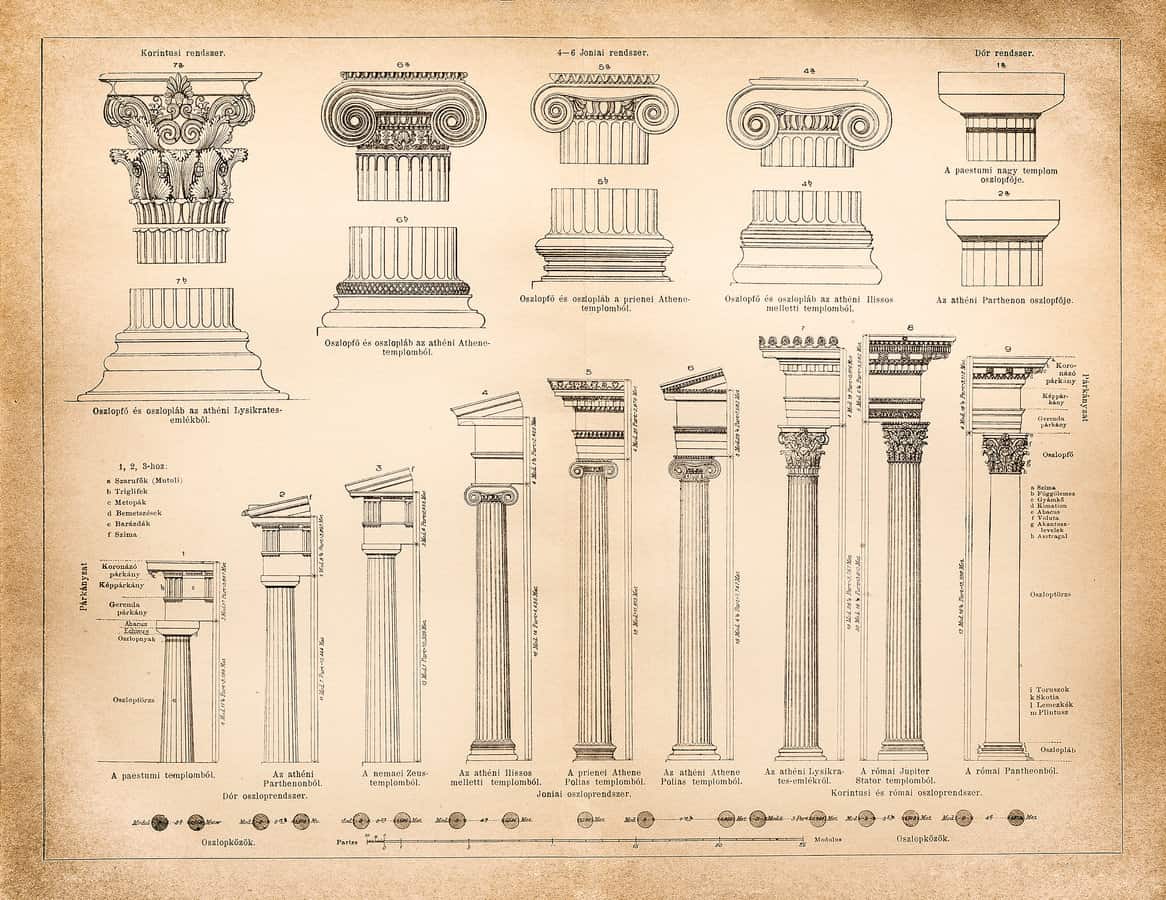 There’s so many types of decorative columns nowadays, and even historically, but the three most people are familiar with are the basic flat-top Doric, scrolled Ionic, and incredibly ornate Corinthian styles.

Greek and Roman temples might come to mind first, but ornate columns meant for both decorative and structural purposes actually date back to the ancient Egyptians. Stone columns were a must-have for palaces and public buildings, and they were carved to resemble lotus reeds and other local plants that were central to their economy and society. These columns evolved into papyriform, where the capitals (tops) of them became incredibly colorful and intricately carved into myriad representations of reed plants and geometric patterns. 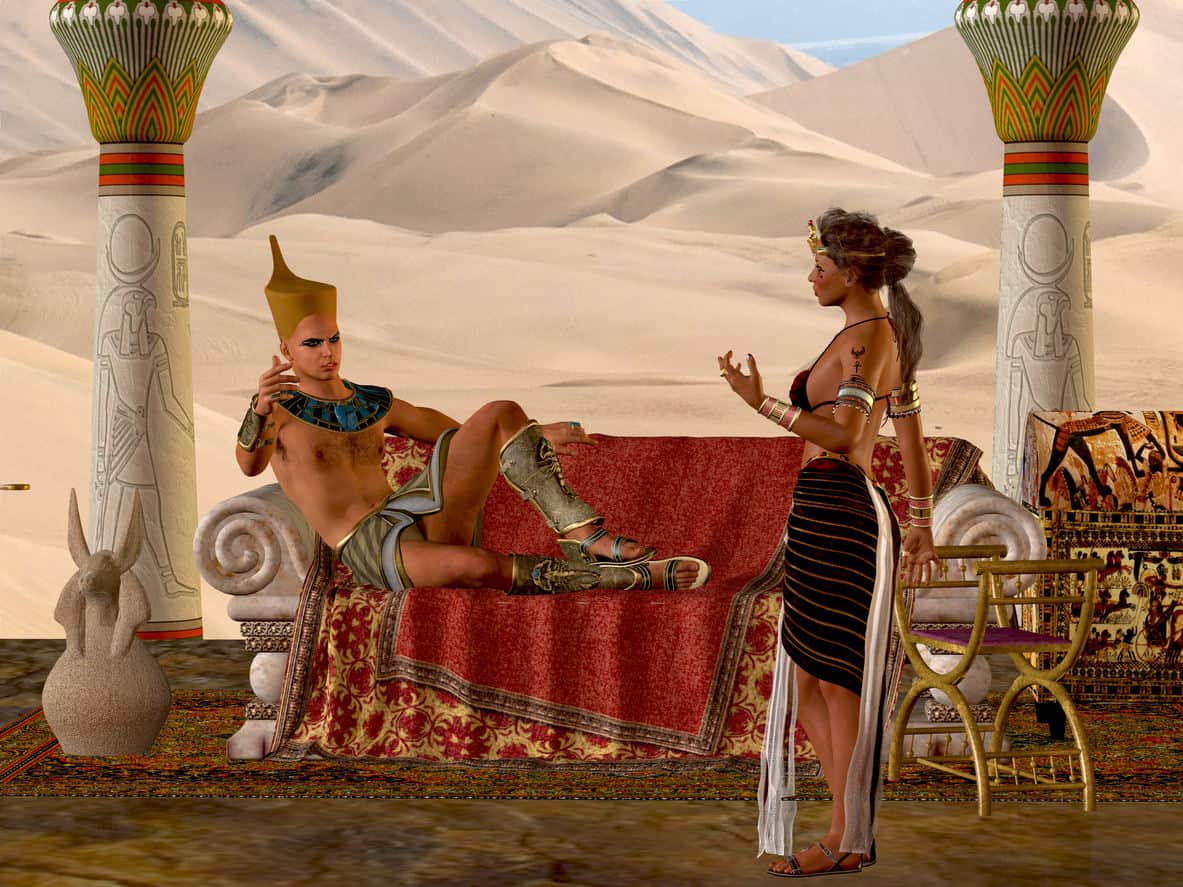 Papyriform would later inspire many 1920s styles and the lovably gaudy design schemes of The Cheesecake Factory.

The way that these functional columns work is that they use the power of compression to transmit the weight of what’s above to the elements down below. Think thousands of years after these early Greek and Egyptian temples and into more modern homes with large rooms featuring thick, heavy ceilings rich with tile work and other aspects that result in a domicile so top-heavy it practically needs a Wonderbra. The top elements are far heavier than that of a single family home ceiling where columns were more than likely not needed for engineering purposes.

In addition to ceilings, columns can also support beams or arches in structures that have them. Other columns are expressly engineered for resisting lateral forces like earthquakes and other natural disasters. So why NOT have them look pretty instead of these utilitarian poles that are just plainly standing there?

Today, columns can be made of fiberglass, wood, marble, composite materials, you name it. They don’t have to be stone, alabaster, or materials imitating them for that whole Greco-Roman aesthetic. Regardless of whether they have structural function or not, there’s decorative columns that get rooted into the floor but you also have freestanding columns of varying height that are pretty inexpensive and easy to find in most home and garden stores. 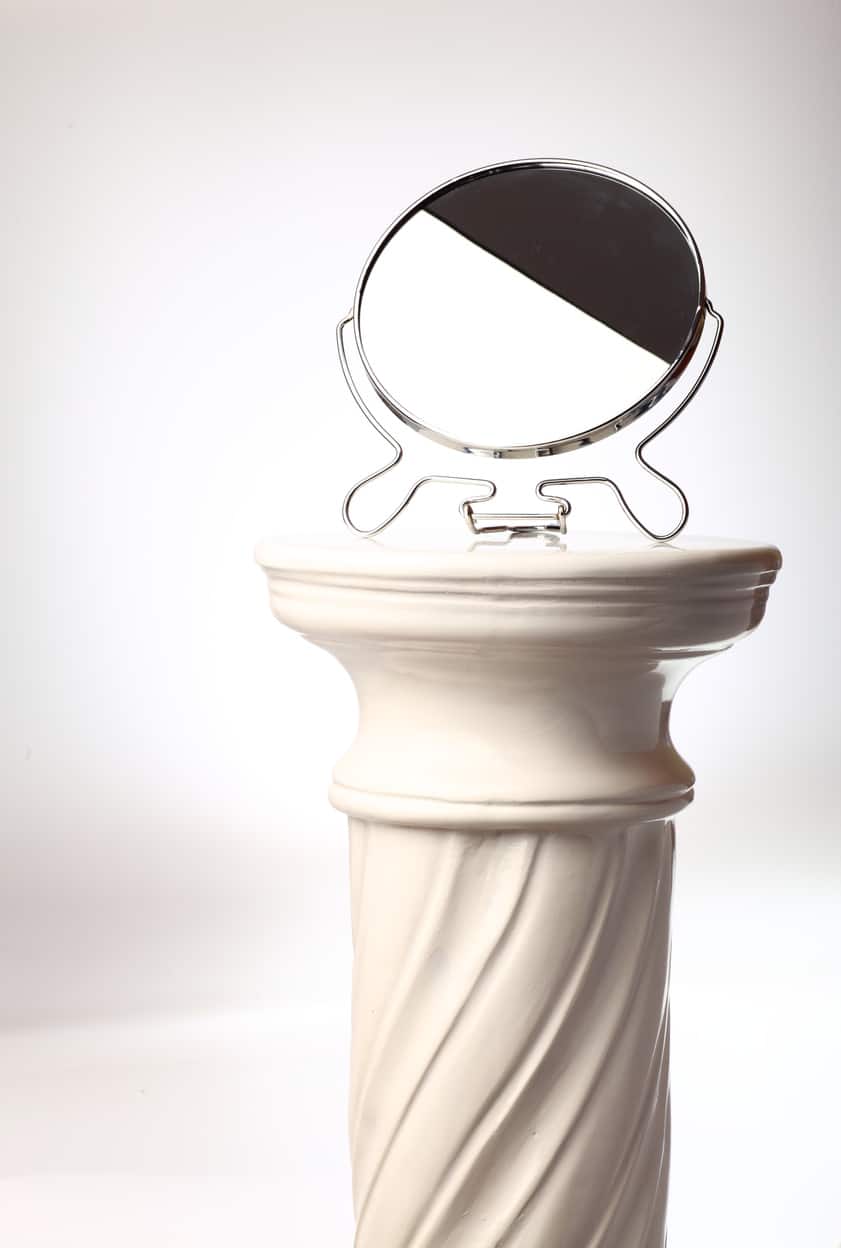 Because any goddess who might not necessarily be Greek NEEDS a freestanding column to place a quadruple magnification mirror for plucking those stray chin hairs. Freestanding columns are ideal for when you want to break mirrors and vases with one accidental swipe in style.

There’s also what’s known as “engaged” decorative columns, where they’re also entirely unnecessary for structural engineering but are part of the wall opposed to freestanding or rooted into the ground with no structural purpose. 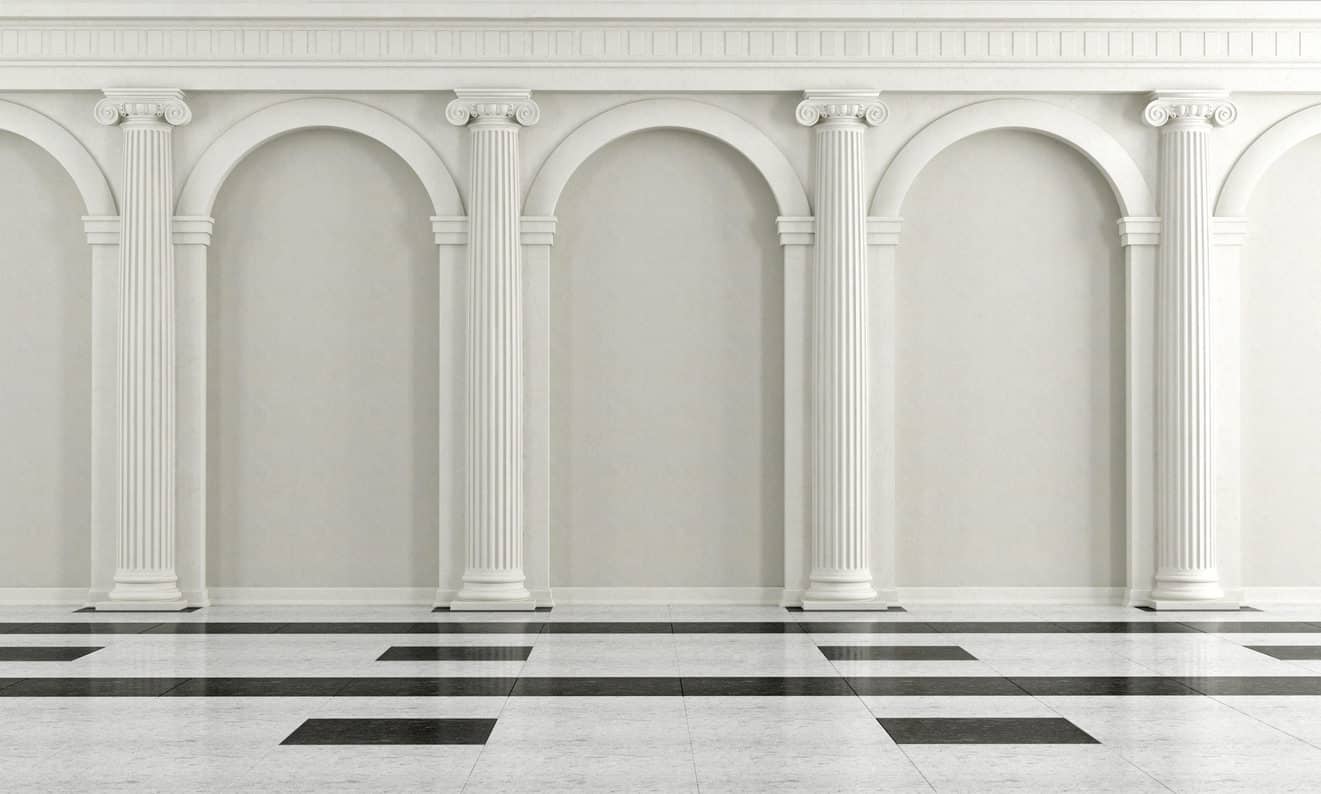 It was difficult to find a residential example of this, but decorative columns tend to be more popular in commercial and public buildings for a reason! These columns aren’t just purely decorative, but engaged columns extrude from the wall in varying degrees.

So, columns have had a long-held important role in architecture and design throughout time. As engineering techniques and design principles became more sophisticated over the years, people still wanted to hold onto the aesthetic of the columns.

But is it Really Something You Want in Your House?

Like many home decorating choices, there are always two sides to this. Standard decorative columns can be quite elegant and stately without giving visitors the impression that your home is an extension of Caesar’s in Atlantic City and the slot machines are two doors down from the bathroom. 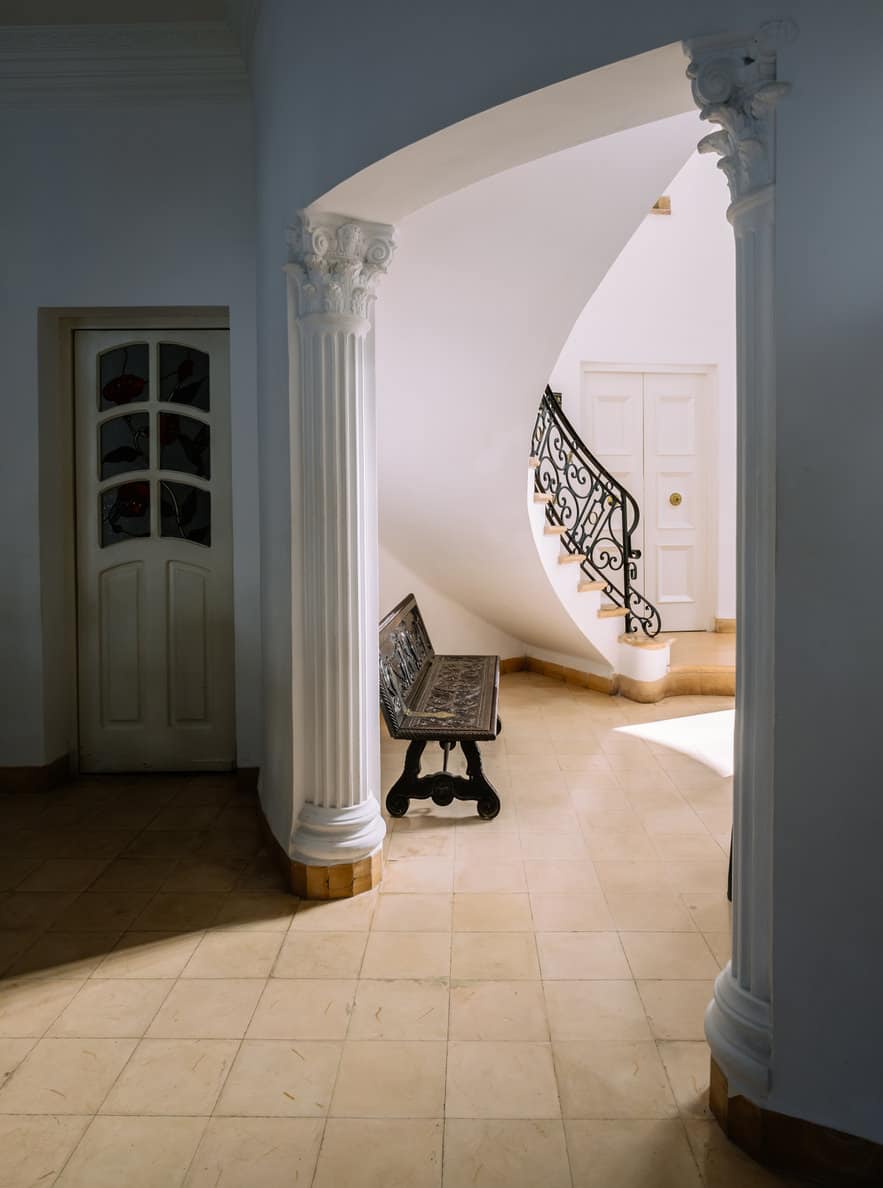 The above lovely Havana villa has semi-engaged columns in the archways with part-Persian and part-Ionic heads that give a palatial impression without being overly in your face about it.

But you know the saying “Many people go broke trying to look rich”? Regardless of your bank account’s contents, the same is pretty much true when it comes to interior design. Not just in the concrete sense of dumping a lot of money into upgrades that end up looking really stupid like false dormer windows, but more in the abstract sense that your home was fine before and this new decorative column just looks like a really cheap and tacky attempt to look like you’ve got a more opulent home than you really do.

Think about how Chesterfield sofas can have a really dignified elegance but they look just plain hideous in these ultra-modern settings where they look so out of place. THAT’S why decorative columns can often look terrible in homes. For instance, notice how people love taking selfies and group pictures around elegant columns and posting them on Instagram?

Chances are you’re at a wedding, someone’s bar mitzvah, or other event at the kind of catering hall that’s meant to make you feel like you’re away from home and in this fantasy land where you don’t have to cook, do cleanup, and you’re dressed to the nines on top of all that. Same goes for those Vegas pictures where the whole point is that you’re in this fancy hotel made to look like you went to ancient Greece and you want those sigh-worthy bits of column to make it into those instagram pictures when you’re lounging at the pool.

Then there’s the practical aspects. Got a setup like this one? 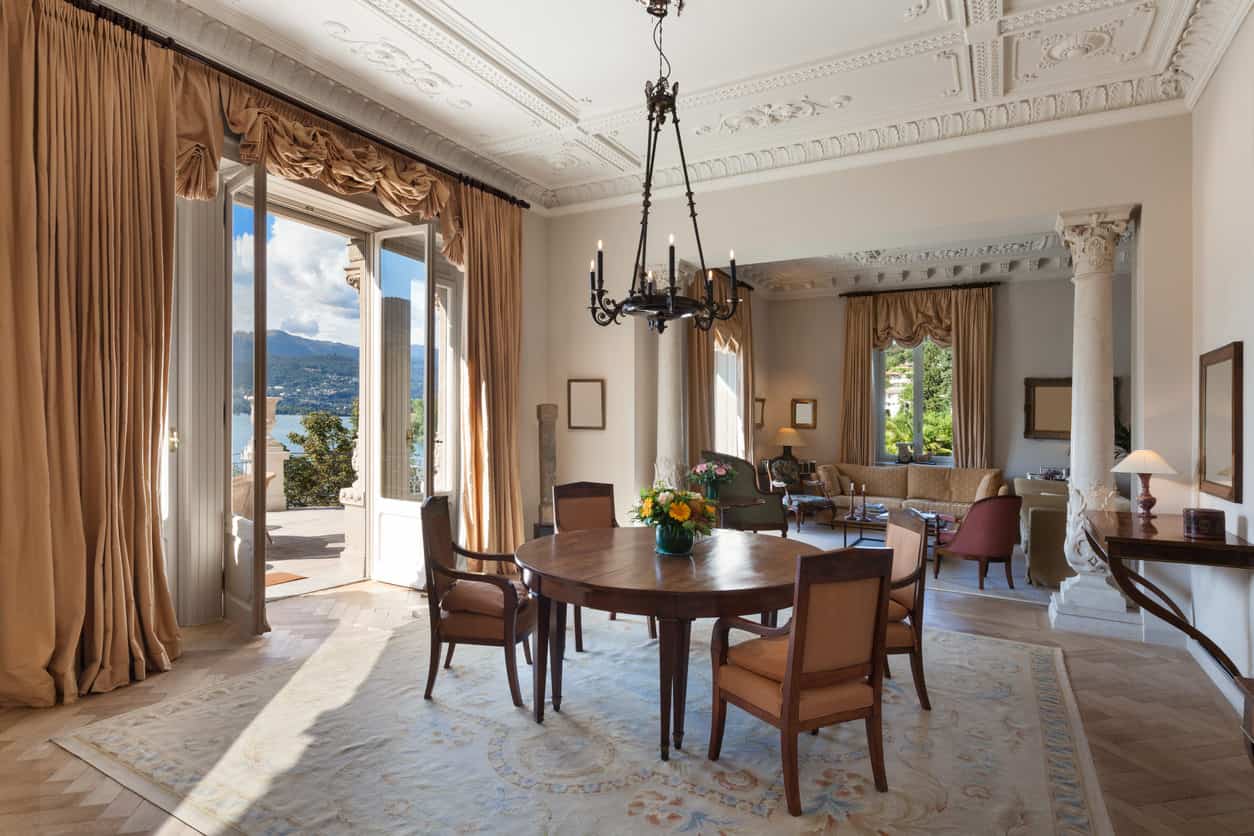 That gap between the wall and column is a nightmare waiting to happen with pets (or kids) that won’t be able to squeeze through it. And it’s totally fine if your life goals don’t entail kids and/or pets! But just IMAGINE the dust that’s going to build up in that gap, I needed an Allegra after typing that.

An engaged column would pose less risk with this, but why sacrifice the wall space at all? Freestanding columns are also just another thing that could topple over and create a huge and expensive mess. Even if you don’t have anything sitting on top?

They can pose an injury risk depending on where you put them. I “fondly” recall one of my mother’s pilgrimages to the now-defunct bargain shopping megalith Value City, we’d schlep down to Wilmington, Delaware at least bimonthly to worship at the altar of capitalism. If you’ve ever played the game Space Funeral, it was a living embodiment of the line “Welcome to The Crap Store, we have many stupid things for sale!”

We lugged this decorative column home that was only about three feet tall but probably weighed more than I did. That stupid thing was placed in the den where it just looked incredibly mismatched with our putrid shag carpeting and other artifacts from the era of leisure suits. The column itself was average-looking, but it was like trying to put gold leaf on burnt toast and passing it off as a gourmet hipster food trend.

It didn’t take long until its height caused countless shin injuries before it got relocated to the patio where it didn’t fare well against the elements, just to break into a few pieces after a rough nor’easter one night. Hey, my parents finally got that Greek god vibe from the 70s they always wanted after all! But most of all, the reason why decorative columns are often a terrible design decision is that it really comes down to their aesthetic and the feelings they evoke.

That feeling that you took your vacation or exotic getaway home is a huge mood-killer. Imagine you just found some kind of golden goose but instead of laying golden eggs, it gives you something like an endless supply of gift cards for your favorite restaurant you tend to only patronize when it’s a special occasion. It sounds like a dream come true first! But then a week later, you grow bored with the same epic dish you always love that they prepare just right.

It was once just something you got for a birthday, anniversary date, or getting that big promotion but now it just feels less than thrilling. it’s just not the same digging into that dorado on the couch in sweatpants by yourself binge-watching Claws. (Still sounds like a fantastic Saturday night after your early thirties come and go, but you see what I mean.) 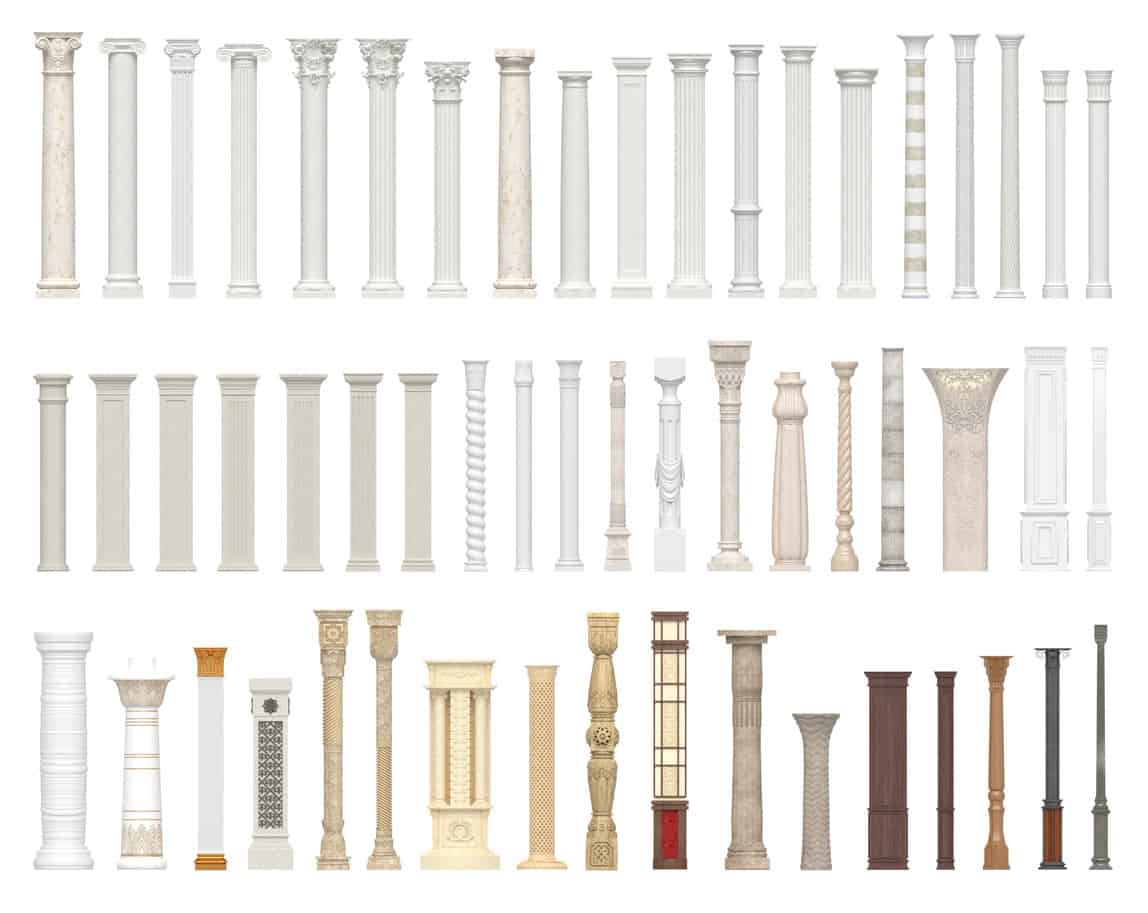 Decorative columns are a sign you’ve left the house. Not something you should have in there. Feeling like you’re in the remains of Persepolis, gazing out at the Mediterranean as those pool jets massage your legs, or that your local courthouse hasn’t really changed since the days of the Roman Senate is something to experience in the moment rather than come home to. Everyone has different criteria for what makes a house a home, but decorative columns just ain’t it sis.