Mike Tyson is a former heavyweight boxing champion. He's a sports icon who holds multiple boxing records. His 5,800 sq ft Las Vegas estate is on the market for $1.5 million. The home was constructed in contemporary industrial style. Notable features include an infinity pool, marble floors, and sky bridges. 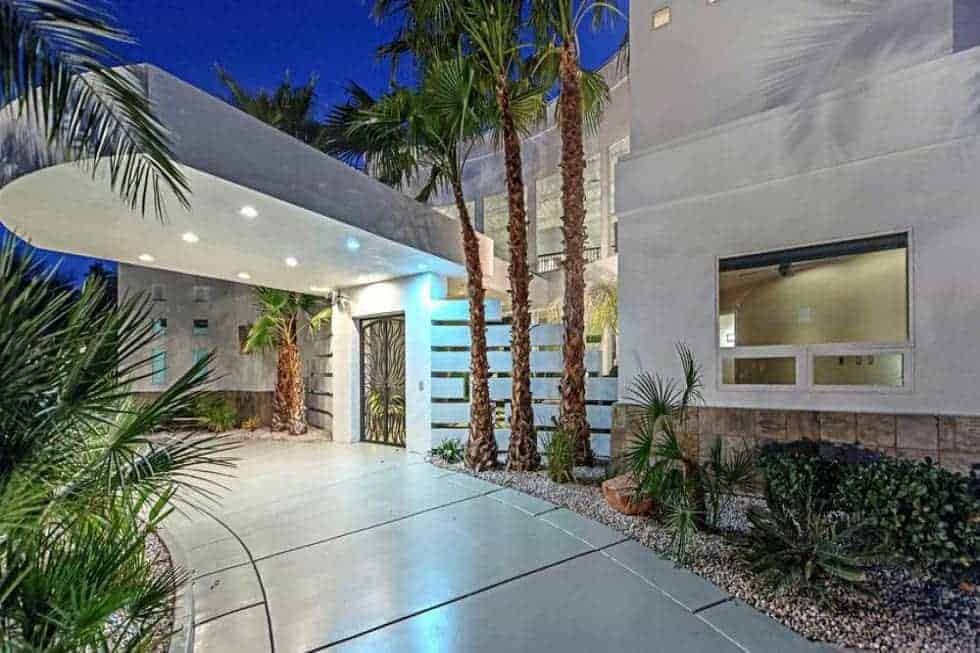 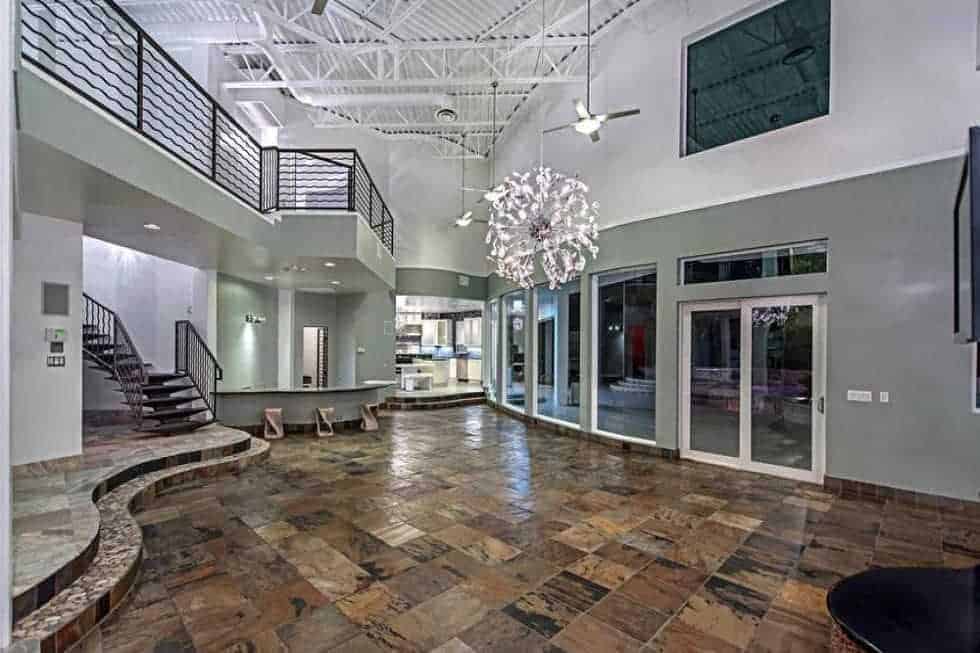 This is the great room with an earthy tone to its mosaic flooring topped with a large ornamental chandelier. You can also see here the kitchen on the far side and the indoor balcony above. Image courtesy of Toptenrealestatedeals.com. 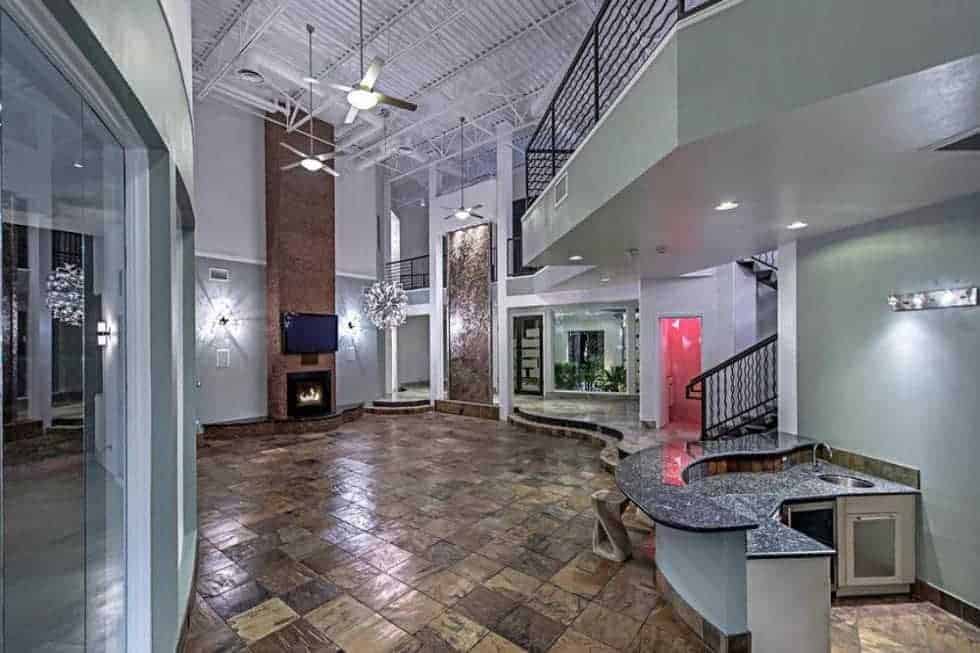 This is the other side of the large great room showcasing the fireplace on the far end as well as the tall Industrial-style ceiling. Image courtesy of Toptenrealestatedeals.com. 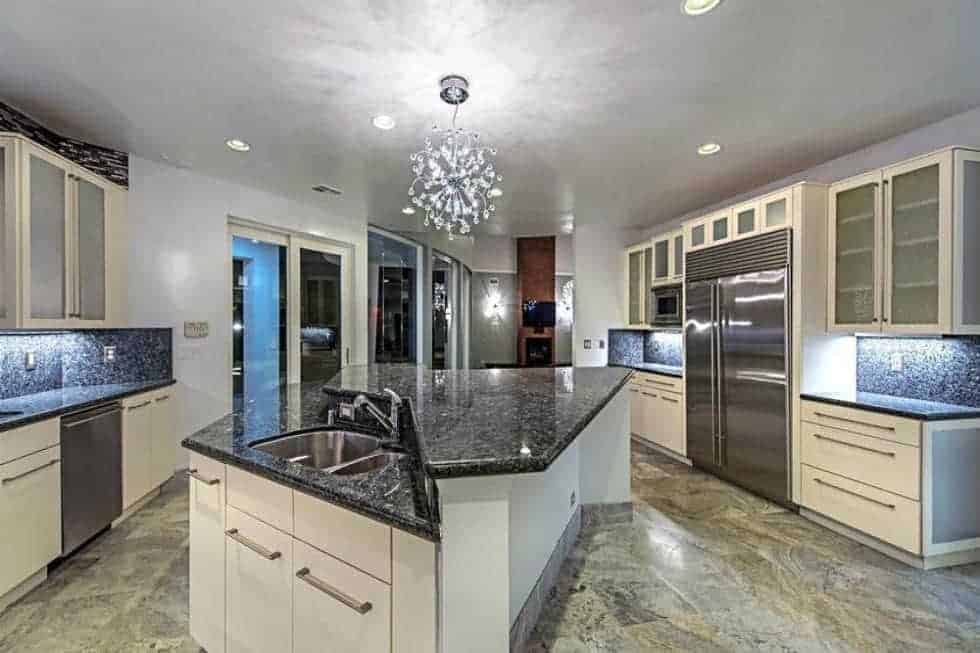 The spacious kitchen has a large kitchen island with a black countertop to contrast the white cabinetry. These make the stainless steel appliances. Image courtesy of Toptenrealestatedeals.com. 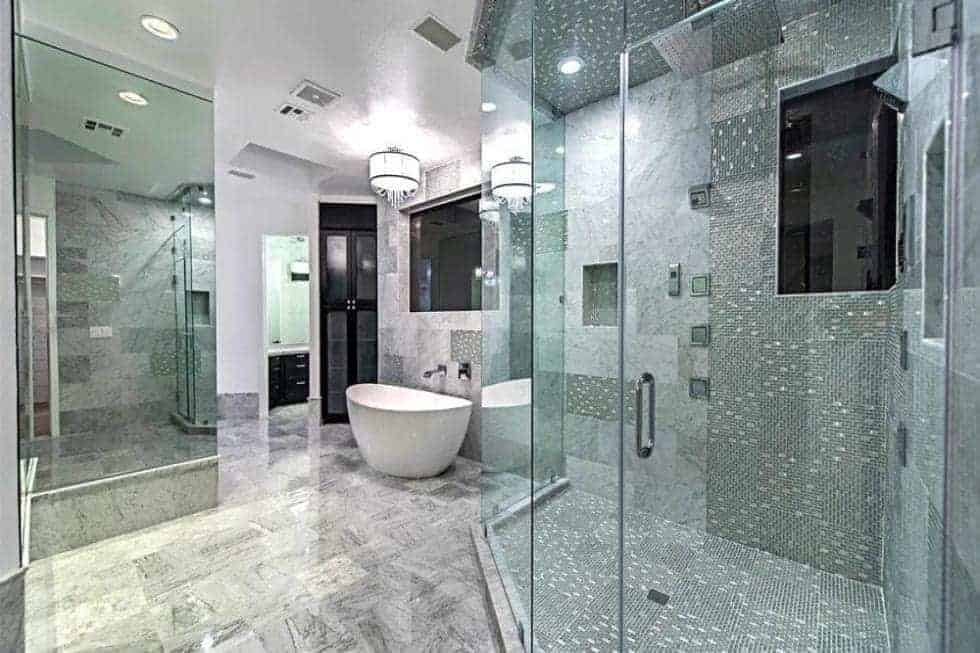 This is the bathroom that has a glass-enclosed walk-in shower area and a freestanding bathtub on the far corner. Image courtesy of Toptenrealestatedeals.com. 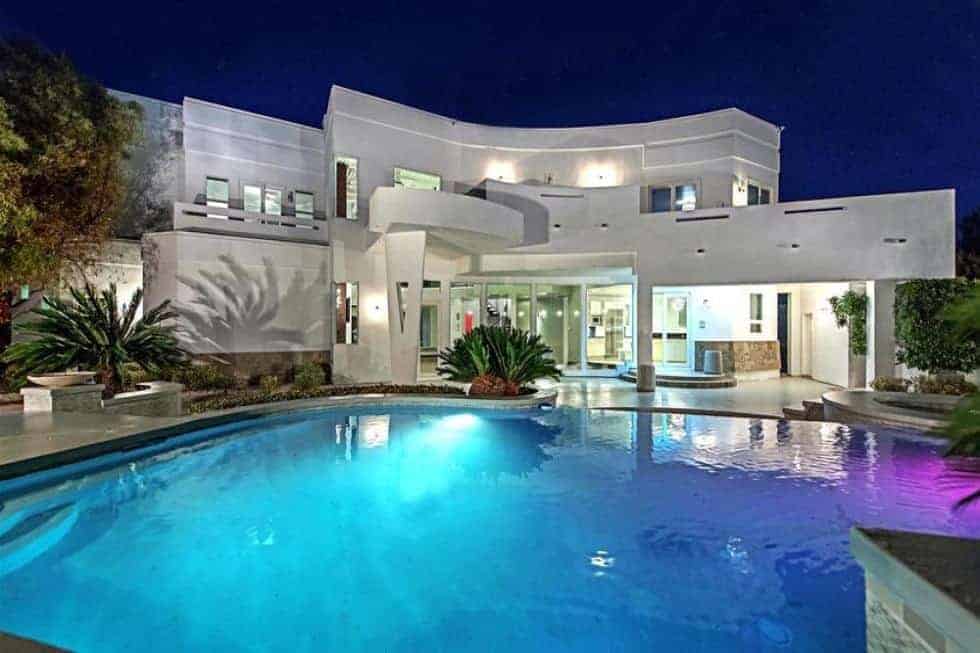 This is a look at the back of the bright house illuminated by the exterior and interior lights that complement the modern structures as well as the large swimming with its own lighting. Image courtesy of Toptenrealestatedeals.com.

When you arrive at the home, you’ll walk up a travertine walkway past lush tropical landscaping. Once inside, you’ll find an open floor plan with high ceilings. Walls are white with exposed white ceiling beams. Glass walls, black iron balcony railings, and a black metal staircase create an open industrial style. A large chandelier hangs in the foyer as a focal point. It’s balanced with a mosaic floor in earth tones.

The kitchen is ultra-modern, with white cabinets contrasted by a black marble countertop. It has stainless steel appliances and a marble floor. The bathroom is luxurious with a freestanding tub and walk-in shower. Gray marble floors and walls create a clean look. Other notable features include sky bridges and 3 fireplaces.

The lower floor has two bedrooms with hardwood floors and a shared contemporary bathroom. The family room also features hardwood floors. The primary bedroom has its own bathroom with a floating tub and seamless shower. Marble floors and a chandelier adorn the room.

The star of the home is the large infinity pool with a 25-foot waterfall accessible from the rear patio. The area also includes two separate spas in addition to the pool. The patio includes seating for entertaining and a BBQ pit. The pool can also be viewed from balconies on the exterior of the second floor. Underwater lighting adds to the opulence of the pool.

Mike Tyson is considered one of the greatest boxers of all time. He’s had 58 career fights, and he won 50 of those. 44 of them were via knockout. Nicknames in his early career were “Kid Dynamite” and “Iron Mike”. He gained a new nickname over the years. “The Baddest Man on the Planet”, which, factually true or not, was certainly well-earned.

His professional career was from 1985 to 2005. He had a 3-year run as Heavyweight Champion, from 1987 to 1990. He was also the youngest boxer to win a heavyweight title, at 20 years old. He was the first heavyweight boxer to hold the WBA, WBC, and IBF at the same time, Today he holds the 6th longest unified championship reign.

Las Vegas is known for the slogan “What happens in Vegas stays in Vegas” and the Las Vegas strip. The strip is an adult wonderland with glamorous casinos and other adult entertainment. However, away from the strip, you’ll find a different atmosphere.

You’ll find celebrity estates and suburban neighborhoods that have little resemblance to the Vegas known to tourists. Las Vegas is home to several state and national parks, including Red Rock Canyon National Conservation Area. There are also cultural attractions, including the Smith Center for the Performing Arts.