What kind of house would you build if you were a massively popular Dallas Cowboys football player? What if you were also a winning favorite Dancing With The Stars star? What if you built your 10,806 square foot house on a 0.93-acre wooded lot in 15001 Winnwood Road in the far northern portion of Dallas? What would it look like?

Emmitt Smith, jersey number 22 in the Dallas Cowboys scheme of things, built his house while planning on having a family. He did an admirable job of both, along with taking his Cowboys to the Super Bowl multiple times. He also found time to dance about and win on Dancing With The Stars.

Mr. Smith’s house opens into a stunning two-story foyer into which you enter one of the equally stunning living rooms, also two-stories and complete with balconies around two sides of the room. The house contains two offices, two primary suites, five bedrooms, five bathrooms, and four half-baths. Mr. Smith is selling his house for $2.2 million, just like the number on his jersey.

Mr. Smith’s house is floored in gleaming black tile, pretty hardwood, and a little carpet. This contrasts well with the stark white walls and ceilings, the floor-to-ceiling windows, as well as the can lights and lovely chandeliers.

Moldings, built-ins, fireplaces, modern tray ceilings, coffered ceilings in one of the home offices/study, along with a touch of an arch here and there break up stark, square walls containing only windows.

The whole house is massive, but the kitchen offers a gigantic stainless-steel side-by-side fridge encased in shiny black. The theme is mirrored in the large center island, shiny black atop a wooden pedestal. The reddish-hued wood is repeated in the cabinets atop shiny black countertops and backsplash. Enjoy the wooded view from the floor-to-ceiling windows in the eating nook.

The two offices are large, but one is masculine and one feminine. The larger study/office is done in dark hardwood with a coffered ceiling and hardwood floor. Built-ins, floor-to-ceiling windows, and big, heavy office furniture complete the look. The second office has French doors leading outside, more delicate furnishings, and a beautiful chandelier.

Other rooms include the game room, big enough to fit all the football team on the blue NFL rug. Next is the theater or media room, a dark wood room with bright red chairs, a tray ceiling painted to look like a cloudy sky, a matching pale blue carpet, and, of course, a big screen. A bar with cabinetry, high chairs, and doors leading to the pool is nearby.

I love Mr. Smith’s house. I like a lot of space, and I’d find it inside 10,000 square feet. I love the windows especially, out of which I can see all the beautiful green around the house. 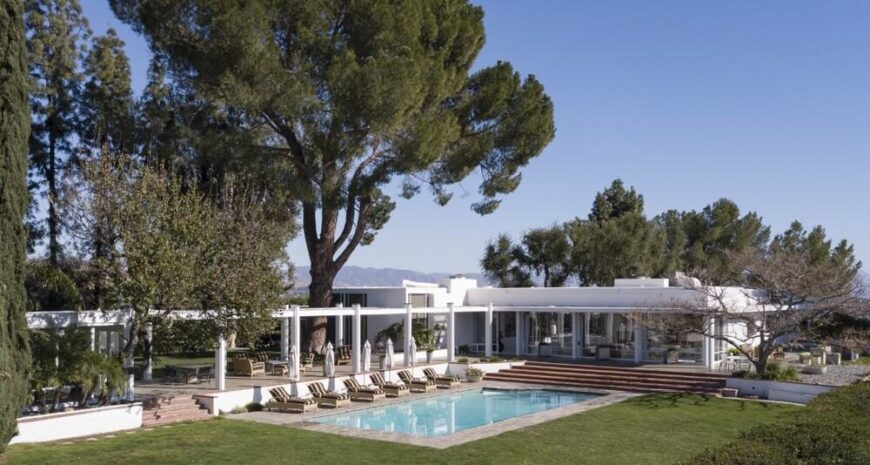