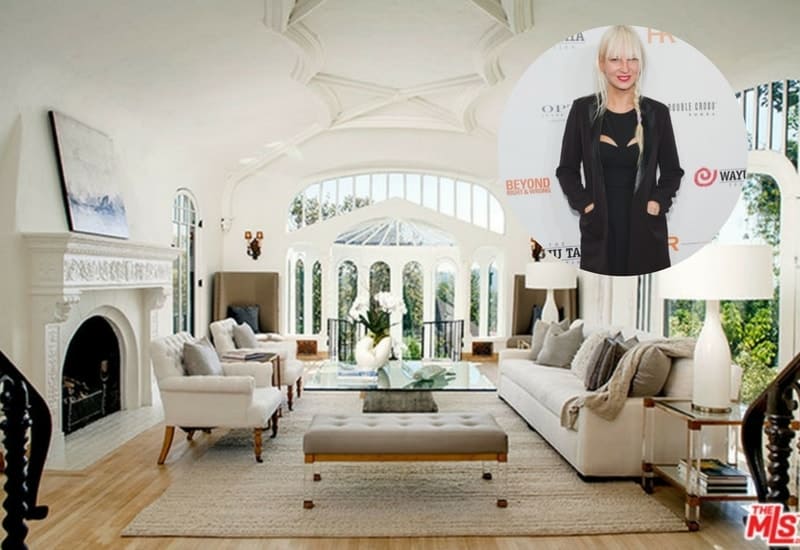 The house of the Chandelier singer and composer boasts a Mediterranean-Revival style measuring at 5,161 square feet. Originally built in 1924, the home features original mix of decors such as a highly articulated woodwork and stained-glass murals.

Sia is, in my view, one of the most talented singer and songwriters working today.

I discovered Sia when she was featured on American Idol. She was a guest mentor for the contestants. I thought she was so nice to everyone and I enjoyed watching her work and help the contestants. After watching that, I checked out more of her songs and became a big fan.

Born in Adelaide, Australia, Sia moved to England in order to pursue her singing career. She first found her big break when she joined Zero 7, leading her to her first solo contract. Her first album was titled “Healing Is Difficult”, giving birth to a hit single “Drink to Get Drunk” while another of her song titled, “Little Man” was remixed by UK musician Wookie. These two songs would take Sia on top of the music industry.

Most probably because of her success, Sia became a victim of alcohol and drugs, causing her to drop out of spotlight and turn her attention in writing songs for Madonna, Beyonce and Rihanna. Upon her return, Sia hides herself by using a wig covering her face and completed her comeback by releasing “Chandelier”, a song that received four Grammy nominations, Record of the Year and Song of the Year.

The house of the Chandelier singer and composer boasts a Mediterranean-Revival style measuring at 5,161 square feet. Originally built in 1924, the home features original mix of decors such as a highly articulated woodwork and stained-glass murals.

Indoors, the house boasts a sunken living room backed by a viewing room that lets the sunlight through. The primary suite features a fireplace keeping the room warm while private balcony and soaking tub add luxury to the room. The home also includes a spacious game room with a bar for entertainment.

Outside, the patio sits on the lush gardens with a spa, small flowing river and statues together with a large rolling lawn and additional relaxing areas such as balconies, proving that this Mediterranean beauty is a real deal.

Check out the full photo gallery below of Sia’s home.

CelebrityNetWorth.com estimates her fortune at $25 million. Personally, I think this is low. She’s a prolific songwriter having written mega hits for many performers and given she earns a piece of each sale/stream, I can’t help but think her net worth is much higher.