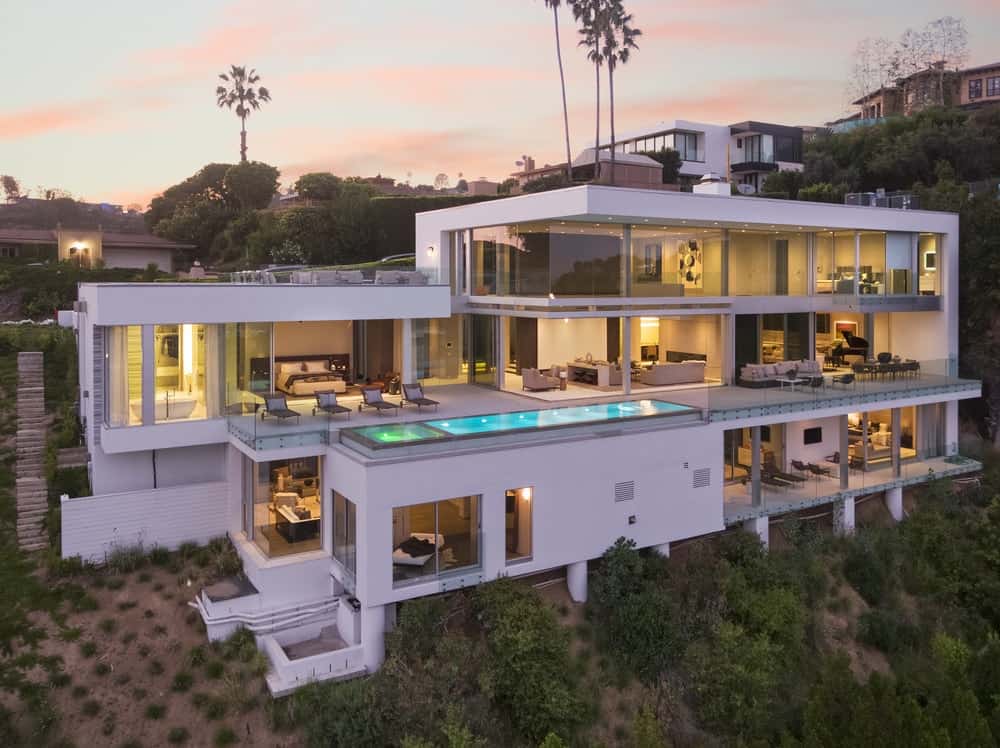 One of the homes of the widely known Los Angeles Bird Streets neighborhood is now for sale in the market. The house that was built in 2012 with a sweeping view of the city below is now on the market priced at $26 million.

The large home was measured at 8,707 square feet with four bedrooms, six baths and a double-height living room that boasts floor-to-ceiling glass walls to maximize the beautiful overlooking scenic views. The amenities of the home include a personal elevator, a large home theater, home office, a wine cellar and lovely bar. It also has perfect spaces for parties with its outside terraces that can accommodate large numbers.

The listing agent of this beautiful home in the Los Angeles Bird Streets neighborhood is David Findley of The Agency in Beverly Hills. 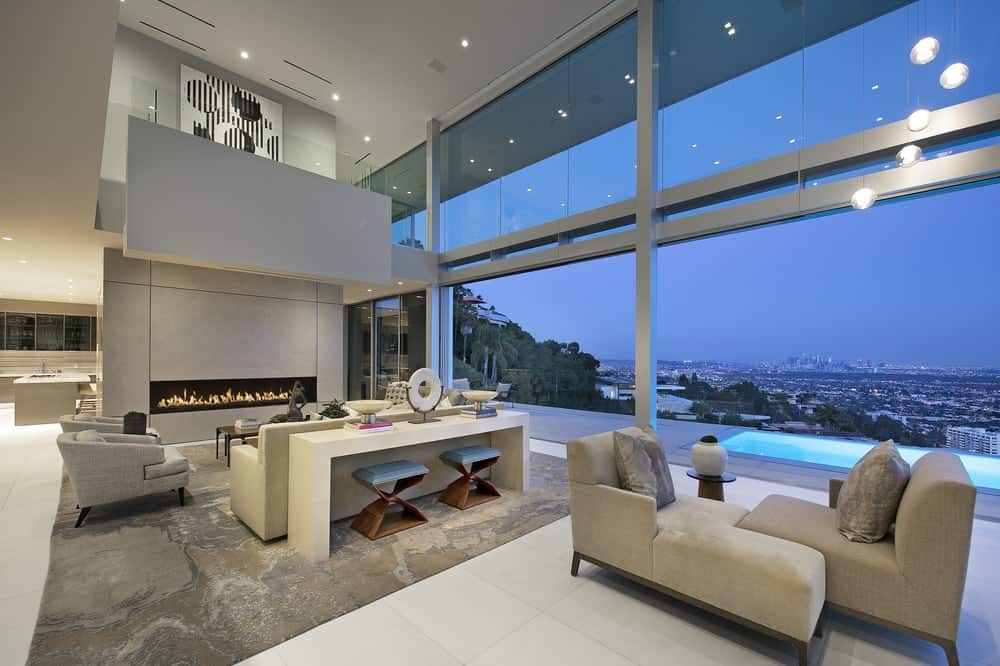 The large and airy living room has a two-story tall glass wall that brings in an abundance of natural lighting as well as provide a sweeping view of the city below. This is augmented by the bright ceiling and bright flooring. Images courtesy of Toptenrealestatedeals.com. 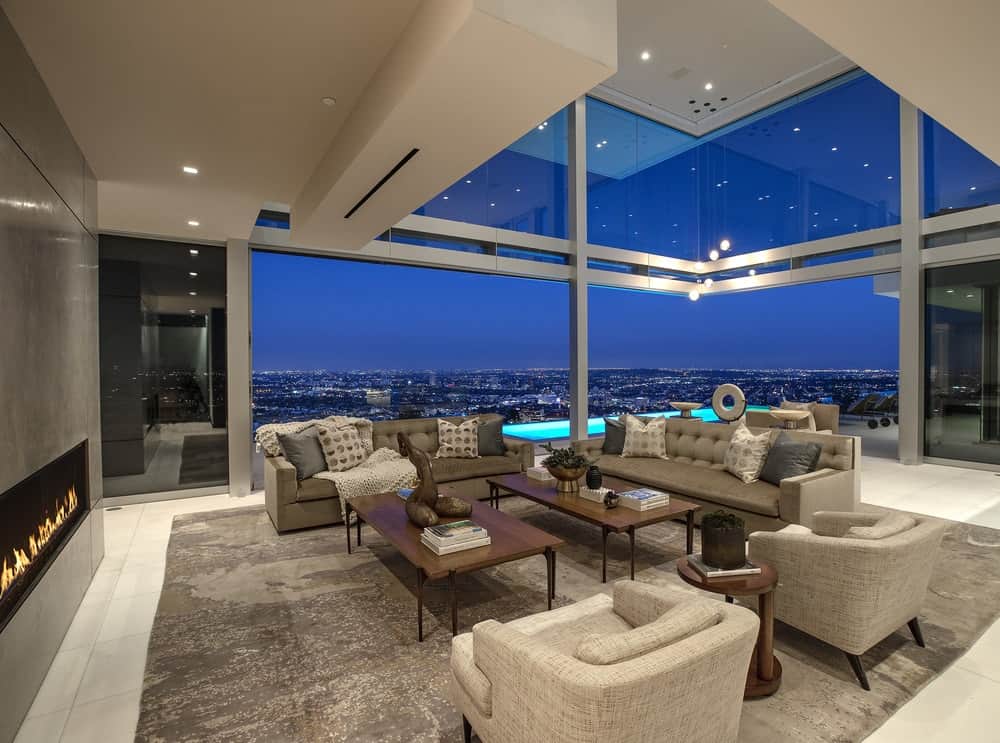 The white flooring tiles of the living room is complemented by a large industrial-style area rug that matches well with the gray sofas and beige cushioned arm chairs with enough space for two wooden coffee tables in the middle. Images courtesy of Toptenrealestatedeals.com. 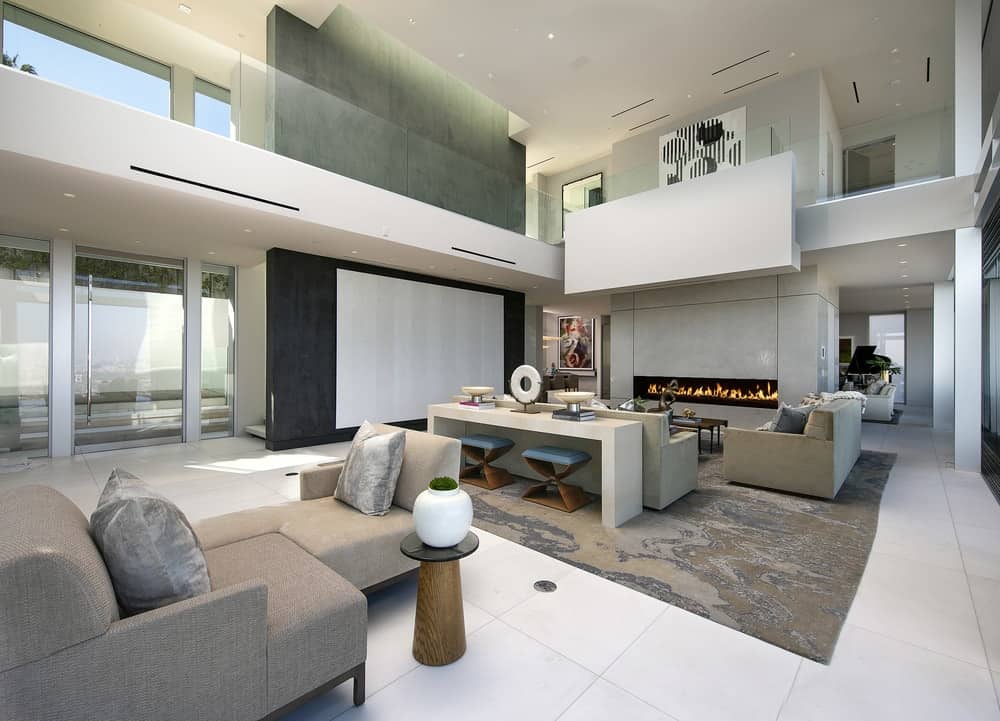 Behind the living room is a quaint space fitted with gray day beds that is perfect as a reading nook illuminated by the natural lights of the tall glass wall and still close enough to the modern fireplace of the living room. Images courtesy of Toptenrealestatedeals.com. 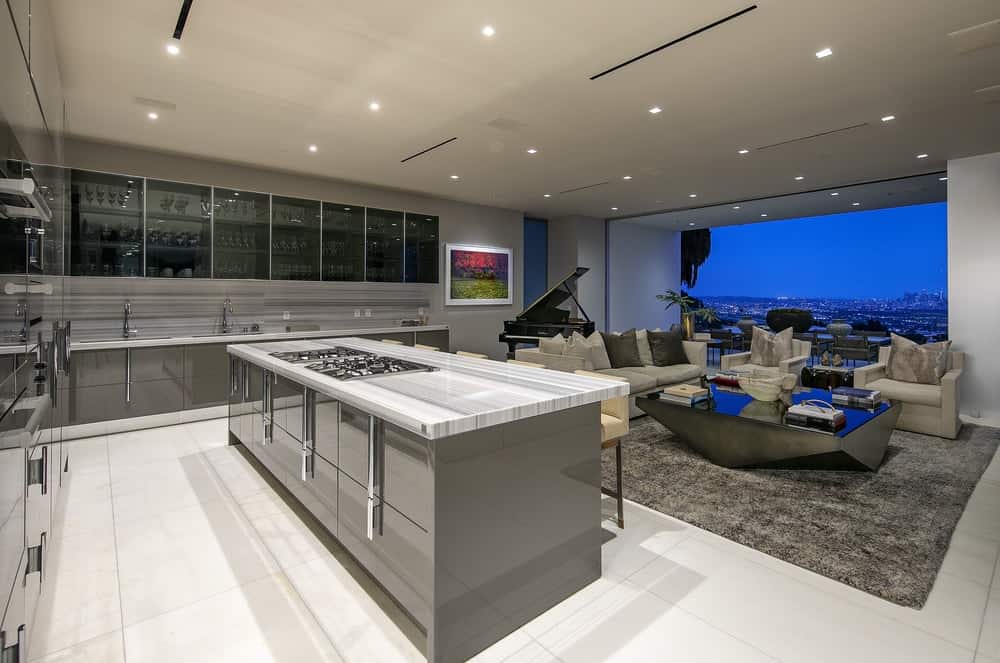 The kitchen has a large gray modern kitchen island that matches well with the light tone of the flooring. This kitchen island is fitted with modern stove tops for the cooking area. Images courtesy of Toptenrealestatedeals.com. 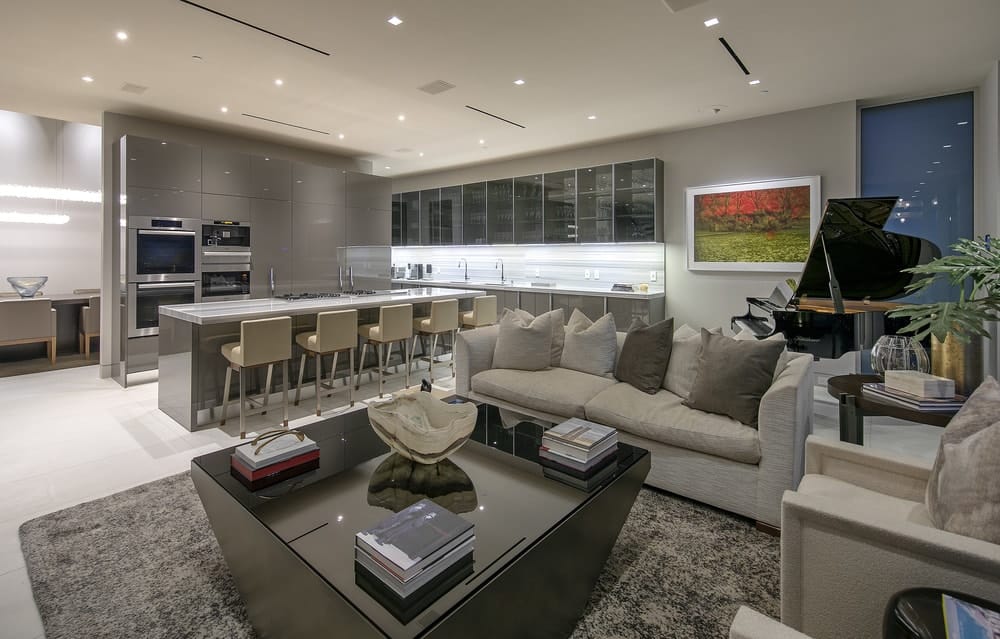 There is a small living room beside the kitchen with a gray sofa paired with a square wooden coffee table on a gray area rug. From this vantage you can clearly see the modern cabinetry of the kitchen surrounding the island. Images courtesy of Toptenrealestatedeals.com. 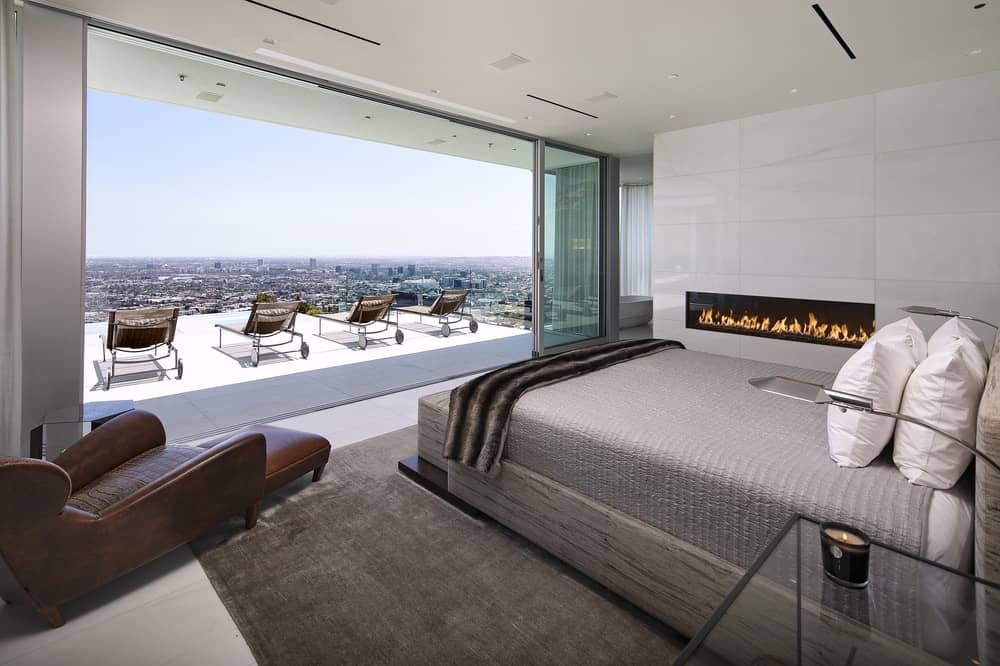 This bedroom has its own modern fireplace beside the gray bed that matches well with the area rug underneath. The whole room is brightened by the wide wall that opens up thanks to sliding glass doors onto a viewing deck that has the perfect view of the city below. Images courtesy of Toptenrealestatedeals.com. 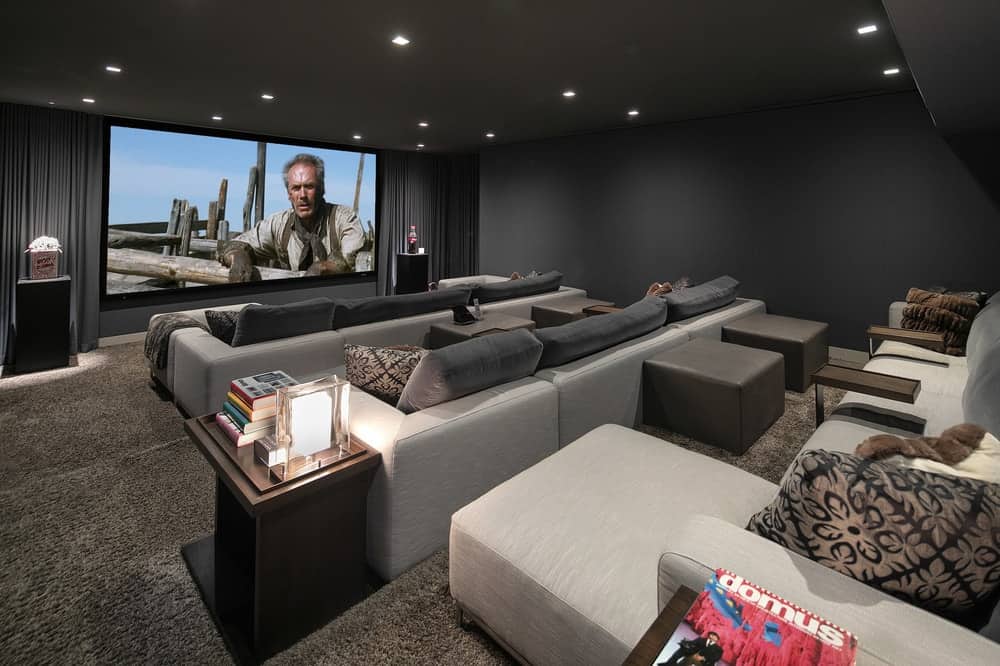 This is the immense home cinema and entertainment room of the house with a large screen at the far end paired with several pieces of sectional sofas on raise platforms for an unobstructed viewing experience. Images courtesy of Toptenrealestatedeals.com. 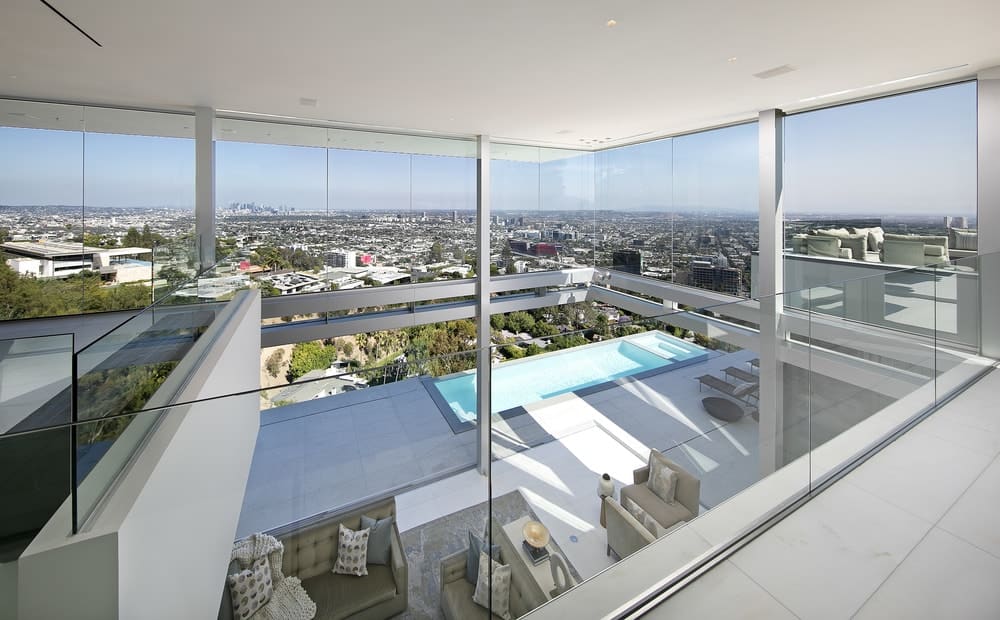 This is the view from the second floor hallway that is fitted with glass borders for an indoor balcony with a great view of the living room below. Images courtesy of Toptenrealestatedeals.com. 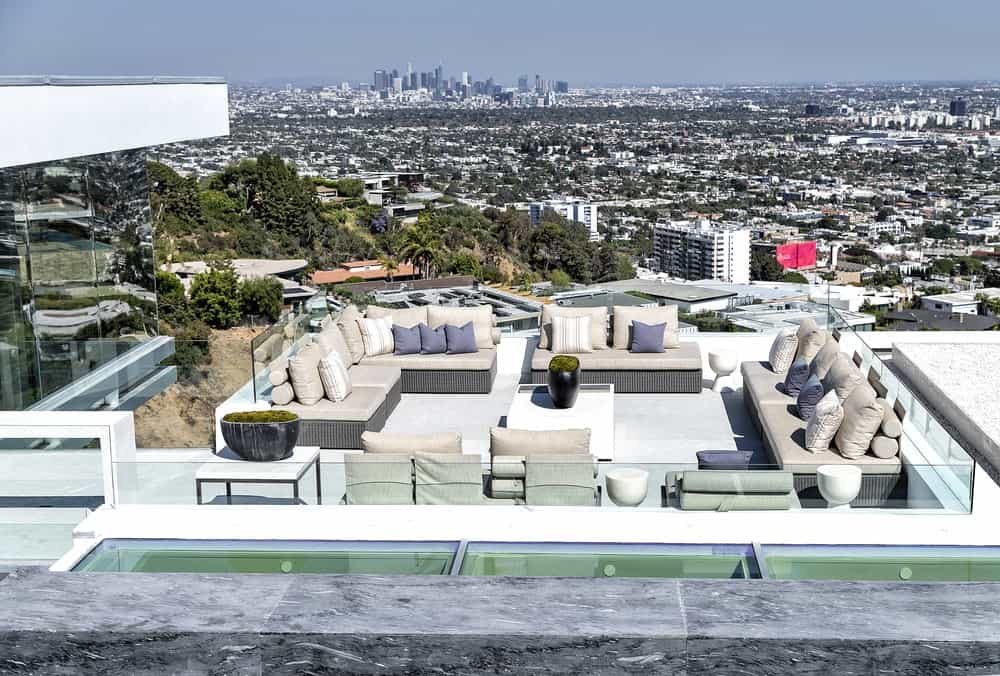 The gorgeous spacious outdoor patio of the house is on one of its terraces fitted with outdoor furniture with cushions. The area is perfect for wine parties and gatherings with the perfect view of the city. Images courtesy of Toptenrealestatedeals.com. 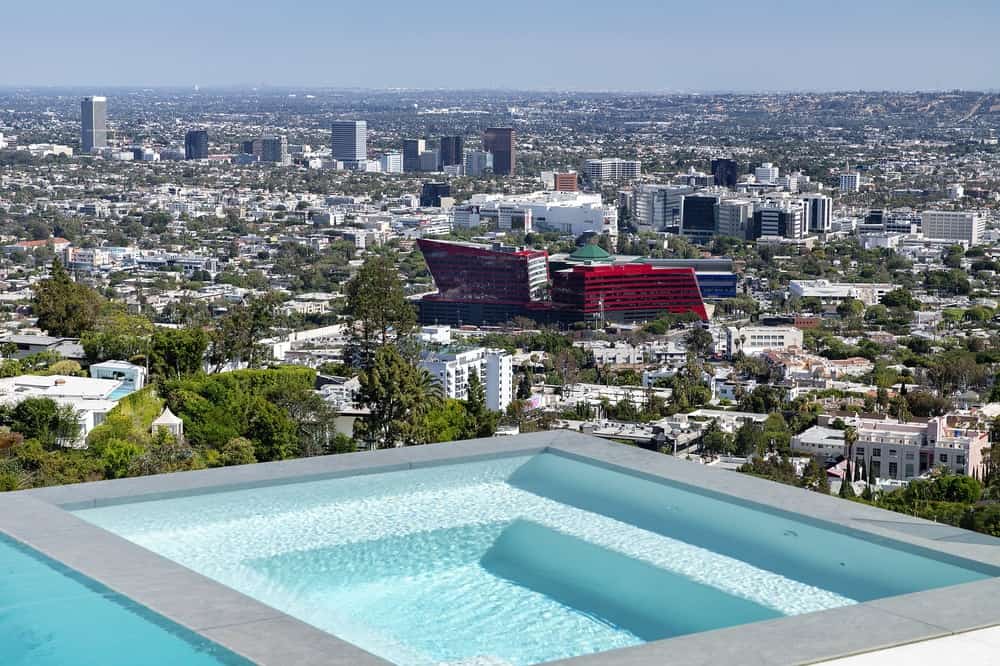 The pool has a jacuzzi-type pool at the corner for a unique experience of soaking amidst the overlooking view of the skyline. Images courtesy of Toptenrealestatedeals.com.

From the caveman to Europe’s royalty, a desire to view man’s surroundings from
a high vantage point still flourishes though for different reasons. For early man it was a matter of survival from advancing tribes and armies. Today spectacular views from hills, mountains and exceptional high rise condos are sought after for luxury homes for the elite to enjoy, impress their peers, and live above the urban chaos.

The more sweeping the view the higher the price tag, weeding out the average buyer who must stand back to make way for mega-millionaires and billionaires. One such home in the Los Angeles Bird Streets neighborhood is now for sale with spectacular views over the city and Pacific through its massive two-story glass walls. Priced at $26 million, it is on the prestigious and private front row on Oriole Way where the air is clear and neighbors have their wealth, need for privacy and security in common.

In 1926, the Bird Streets hatched above the Hollywood Hills as more celebrities wanted to move higher than their friends and new development began. Each street was given the name of a bird. Why? Not just because it was a cute theme, but because those who lived at that height for the first time had a true bird’s eye view of the surrounding environment. Actors, producers, publishers, musicians, and others with deep pockets began scrambling to buy land and build their homes.

It was the place where young actors achieving their first success would buy their first home such as Rock Hudson as he did after receiving critical acclaim in Magnificent Obsession. The boom continued into the 1960s, which was also the year George Harrison wrote the song Blue Jay Way while living on that street. He made reference to the fresh air while looking down on the “fog” over LA, which in the 1960s was the yellow smog that covered the city and could be seen from almost a hundred miles away. In recent years it has been home to Leonardo DiCaprio, who owns a two-house complex, Jennifer Aniston and Keanu Reeves among others.

Residents are socially oriented and formed their own Doheny Dining Club where a group of about 50 meet twice a year for progressive dinners. Another perk for residents is its five-minute access to Sunset Strip and the studios.

Built in 2012 and now for sale, this contemporary 8,707-square-foot home with some of L.A.’s best views has four bedrooms, six baths and a double-height living room with floor-to-ceiling glass walls through which one sees the infinity-edge pool that seems to hang in space. The upper level surrounding the living room is privy to even more views. There is an elevator, a large home theater, a home office, three guest suites, a wine cellar, a bar, and a formal dining room. The kitchen is designed for a cook’s cook and is connected to an area devoted to entertaining. The outside terraces will accommodate large numbers when events are hosted and guests get heady from the height as well as their cocktails.

Located in the most coveted front row position in L.A.’s storied Bird Streets, this contemporary home flies high above the crowd from its lofty location but is a convenient five-minute hop to Sunset Strip and the studios and is priced at $26 million. The listing agent is David Findley of The Agency, Beverly Hills.