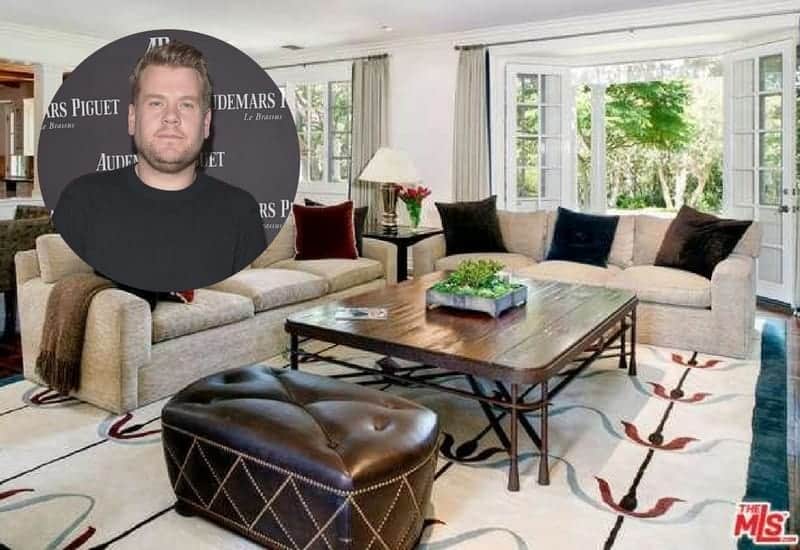 James Corden, funny-guy host of the Late Late Show just bought himself a swanky traditional-style mansion in L.A. For $9.77 million he gets 8,609 sq ft on approximately 1/2 acre of land. As you’ll see below, that acre is nicely landscaped.

Who is James Corden?

Unless you stay up into the wee hours of the night (or morning), you may not know who James Corden is. We’ll fill you in. Born in 1978, he hails from the UK. Like CNN hiring Piers Morgan, Corden is another example of American TV hiring British TV personalities to head a popular show. Let’s hope for James’ sake, he has a longer run (although Piers had a good run on CNN, it could certainly have been longer).

James’ comedic career took off further when he co-wrote, co-created and co-starred in Gavin & Stacey, a BBC sitcom that ran from 2007 to 2010. Before Gavin & Stacey, James starred in British TV series Fat Friends from 2000 to 2005.

Since then he’s hosted a variety of awards shows and then started as host of the Late Late Show on March 23, 2015 taking over from Craig Ferguson.

Interestingly, in 2016, James had one of the most viral videos on YouTube which was a Carpool Karaoke segment with Adele. To date, it’s amassed over 170 million views  Check it out:

It’s not an old house. It was built in 1997 on a 20,000 sq ft lot. The home is 8,609 sq ft, which is a big house. Built in the traditional style, it’s located in the swanky burb Brentwood Park, CA. This house seems to attract funny folks since James purchased the house from Steve Levitan (creator of the hilarious Modern Family TV show).

My favorite feature is the massive primary bedroom. Don’t get me wrong, the entire house is nice; much nicer than mine. However, check out the primary bedroom below which huge living room off the sleeping area. I love that.

I also love the grounds. It’s surrounded by gorgeous gardens and has a nice swimming pool. The gardens give the entire property privacy that any celebrity requires.

Finally, I like the kitchen. It’s not a flashy kitchen, but it’s large and has a cool mildly rustic vibe.

Overall the house, despite it’s almost $10 million price tag, isn’t all that ostentatious at all.

I think an interesting aspect of celebrity homes is where they’re located. There are definitely hot spots and Brentwood Park is one of them. Here’s the map so you can see where it is in relation to the surrounding area. As you can see, Brentwood Park falls in between Beverly Hills and Pacific Palisades… which is a long corridor in West Los Angeles of swanky neighborhoods.

CelebrityNetWorth.com pegs his net worth at $10 million.