Hugh Hefner's Playboy Mansion in Los Angeles was a symbol of opulence and decadence for over 40 years. Acquired by the heir to the Hostess Twinkie fortune for 100 million dollars in 2016, an agreement with the City of Los Angeles ensures that this iconic home will stand for many years to come. 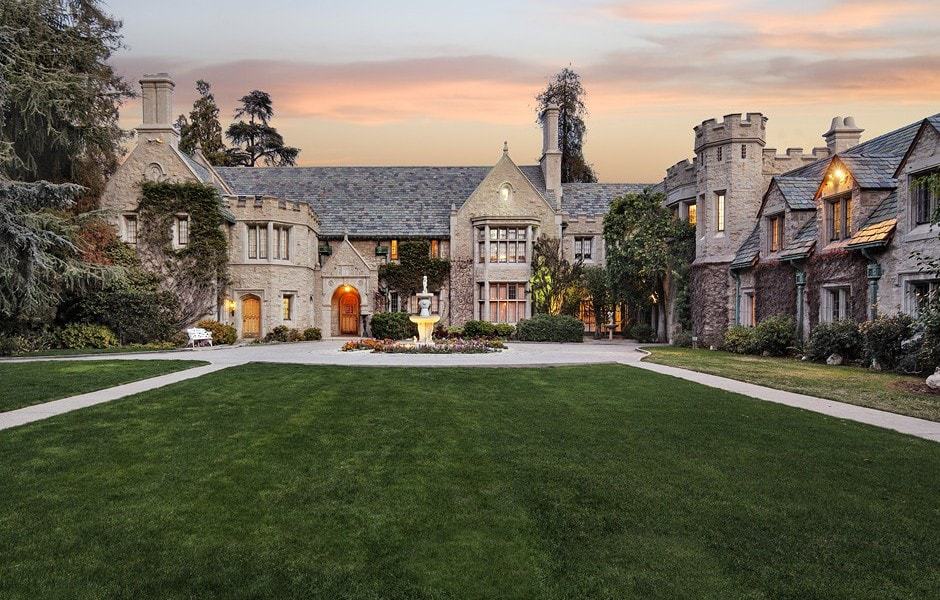 Imagine a 22,000-square foot mansion with a pipe organ, a wine cellar you reach by a secret passageway, and a fully licensed zoo with flamingos, peacocks, monkeys, and bunnies. Then add a waterfall, a huge koi pond, a redwood forest, an orange grove, a pet cemetery, a grotto, an underground bathhouse, and a basement gym beneath the bathhouse. Across the street, you maintain accommodations for a staff of 70, a 24/7 kitchen, and a six-acre compound with housing for Playboy Bunnies. 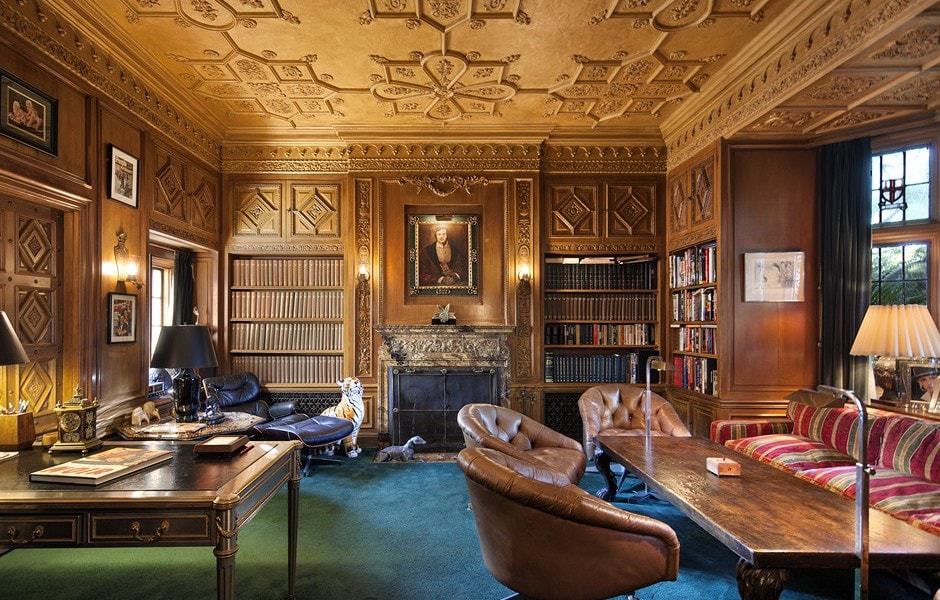 This is the elegant and luxurious home office with a tall intricate amber ceiling, large fireplace and a couple of desks on a charming carpeted floor. Images courtesy of Toptenrealestatedeals.com. 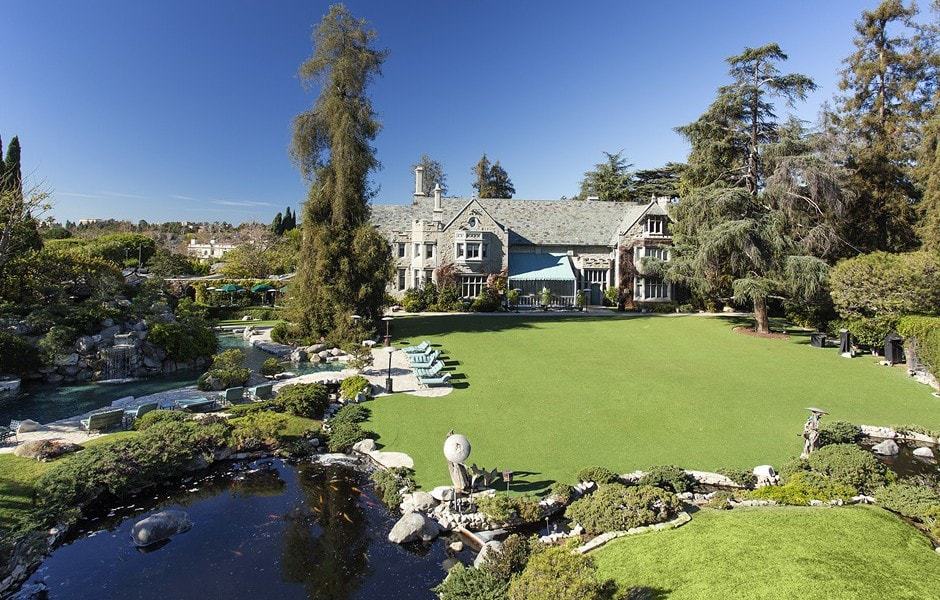 The is the massive backyard of the mansion with wide lawns of well-maintained grass adorned with tall mature trees. Images courtesy of Toptenrealestatedeals.com. 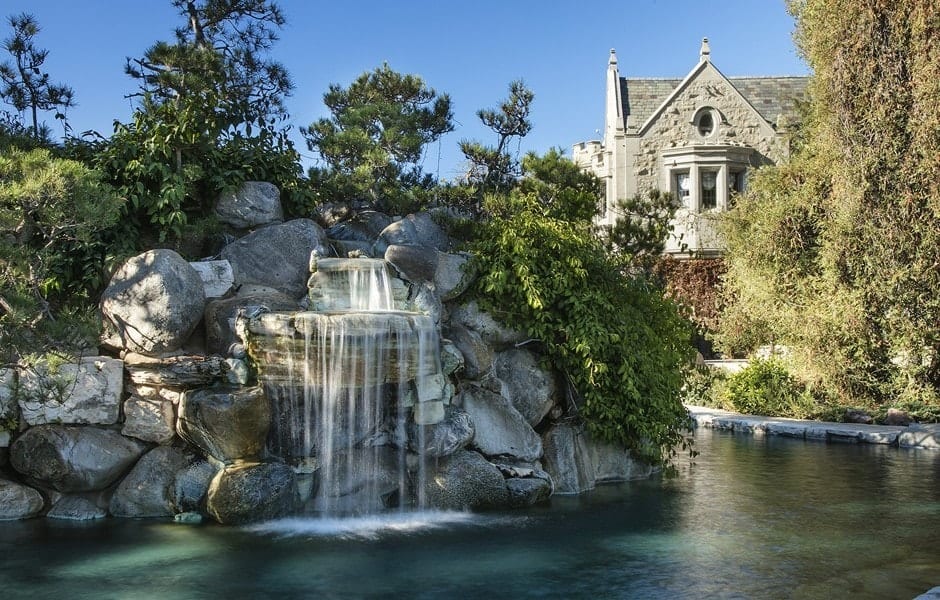 This is a gorgeous large pool incorporated with a charming landscaping designed to imitate natural formations including the charming stone falls on the far side topped with tall trees. Images courtesy of Toptenrealestatedeals.com. 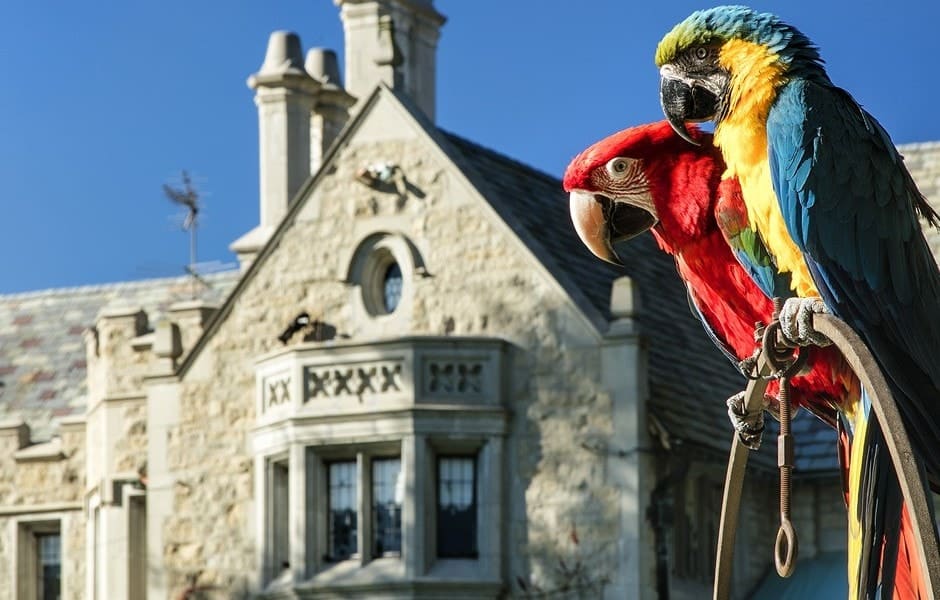 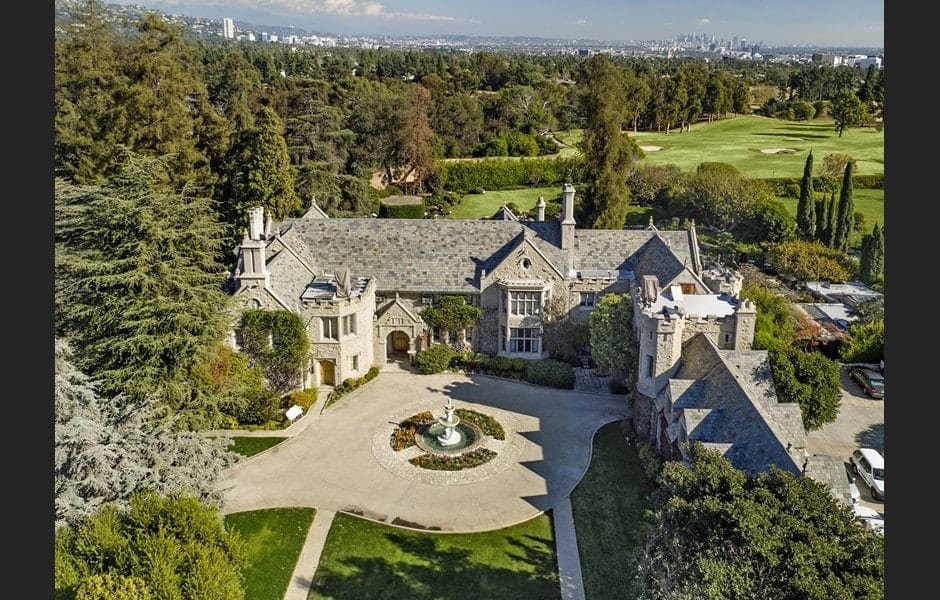 This aerial view of the mansion shows just how massive the house is. This also shows the isolation and privacy afforded by the large piece of land that is field with tall trees. Images courtesy of Toptenrealestatedeals.com.

Then imagine selling your mansion for $100,000,000 and not having to leave for the rest of your life. That was the deal Playboy founder Hugh Hefner struck when he sold the Playboy Mansion in 2016 to 34-year-old investment heir Daren Metropoulos, his next-door neighbor, who was fine with Hefner’s sticking around. Metropolous owes his fortune to the rescue of the companies that make Hostess Twinkies, Chef Boyardee, and Voortman Cookies. He could afford to wait.

Hugh Hefner lived in the Playboy Mansion in Los Angeles from 1974 until his death at the age of 91 in 2017. Entertainment reporters filed stories to read around the world about lavish parties attended by movie stars and celebrities, the Who’s Who of Hollywood. Hefner’s Playboy Mansion also served as a television set and as a venue for charitable fundraising events. A tireless marketing genius, Hefner attended many events in his trademark silk pajamas.

The Playboy Mansion was built in 1927 in a Gothic Revival style as a home for department store heir Arthur Letts, Jr., whose father founded the Broadway department stores. The mansion sits near the campus of the University of California at Los Angeles and the Bel-Air Country Club, and close to the northwestern corner of the Los Angeles Country Club. But all of its histories were not glamorous.

In 2011, former Hefner paramour Izabella St. James wrote in her memoir Bunny Tales that everything in the mansion reeked of age and decay. Hefner’s house dog Archie would add to the air of decay by relieving himself on the curtains, and each of the 12 bedrooms had mismatched furniture that looked like it had been bought at a charity consignment shop. She said the mattresses were disgusting, old and stained, and the sheets were past their best, too. She spared her readings any description of the 21 bathrooms.

But new owner Daren Metropolous is changing all of that. Since Hefner’s death in 2017, Metropolous entered a covenant with the City of Los Angeles that the Playboy Mansion will never be torn down. Metropolous has agreed to maintain it as a historic landmark and a prime example of the Gothic-Tudor architectural style. In return, the City of Los Angeles has allowed Metropolous to take care of “long-deferred maintenance” and modest interior renovations that will not disturb the character of this unique part of entertainment history.

The deal Metropolous struck with the City of Los Angeles guarantees that the Playboy Mansion will be around for a very long time. For most of us, the only time we will see the interior is in a rerun of Beverly Hills Cop II, but we can all know that the memory of Hefner’s unique contributions to our culture will be preserved in what was his house.