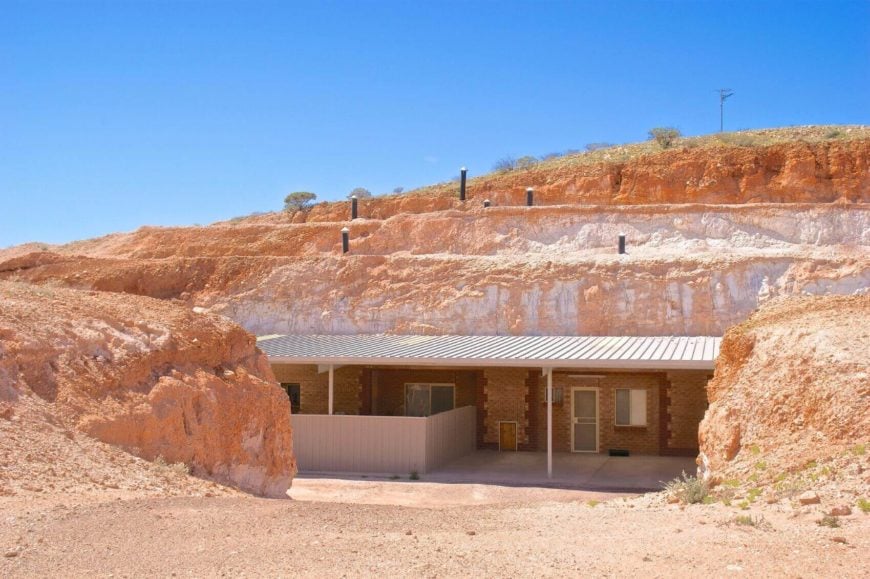 Welcome to our gallery featuring one of the most unique places on earth, Coober Pedy, Australia.

What began a century ago as the largest opal mining operation on earth has evolved into a subterranean community.

The massive underground structure beats the scorching outback heat with a series of interlocking spaces, all beneath the surface of the earth.

Approaching the area, you’re bound to see mysterious chimneys rising from the sand, along with bold red signs warning of “unmarked holes.” It’s enough to put anyone on high alert, but the truth is far more welcoming than it seems.

Below the surface, Coober Pedy is filled with bedrooms, churches, bookstores, bars, and more. It’s a veritable wealth of modern amenities tucked under the earth, and it’s been this way for a hundred years.

This cosmopolitan town holds a population of around 3,500 people from over 45 nations, all gathered together in a strangely unique part of the planet.

One of the major attractions here is Faye’s Underground Home, a space excavated thirty years ago by a trio of women in the old fashioned method, using picks and shovels.

Another subterranean landmark is famous traveler Crocodile Harry’s dugout, which many may recognize from the 1985 film Mad Max: Beyond Thunderdome. Although Harry passed away a decade ago, his home is open to the public for viewing.

Possibly our favorite component of Coober Pedy is the Desert Cave, the world’s only underground bar and gaming room. This must-see space sends visitors spiraling into the past.

Other important accommodations down here include the Old Timer’s Mine, a formerly hidden portion of the original 1916 mine, the world’s only underground church, and the underground museum, which tells the entire story of Coober Pedy.

The individual homes are cramped but cozy and the pathways are ample and labyrinthine. The entire space is well appointed with attractions and entertainment options.

If you’d like to stay, the Modern Underground Hotel has you covered. It’s a fascinating space that should be seen by everyone once in their lives.

Here’s a look at one of the multifaceted, cozy stone bedrooms in Coober Pedy. Aside from rock carved walls, it could almost be a bedroom in any above-ground home.

The church is an astonishing work of art, with stained glass, stone carvings, and a soaring ceiling. It would be impressive anywhere on earth, but is heightened by its underground nature.

Here’s an even closer look at the intricately carved cathedral ceiling of the church. The lighting in here makes the entire space glow.

This is one of many hallways crisscrossing the underground city. They’re built tall and as wide as possible to minimize any feeling of claustrophobia.

Here’s a look at a cozy home interior in Coober Pedy. This broad dining room features shelving carved into the walls, an abundance of artwork, and an open floor plan for maximum mobility.

Attached to the dining room by a broad archway, the kitchen features standard amenities found in any above ground home. This area is brightened with natural light, flooding in from special holes carved just for that purpose.

Here’s the large game room inside the hotel, flush with a classic modern atmosphere, centered on a full size billiards table.

Approaching the main lobby, we see an extravagant layout extending both above ground into traditional building structures, as well as tunneling directly into the earth.

Here’s one of many hotel rooms, luxuriously appointed as can be and designed with a port hole for natural sunlight to spill down. This makes the underground hotel feel more comfortable for visitors.

This is one of many more functional hallways, less ornate in its design. These connect every interior component of the city.

Here’s a peek at the actual opal mining process, where the work is done mostly by machines at this point. As the tunnels go deeper, Coober Pedy expands.

This is an entryway to the mining operations part, a bit more rustic and industrial looking than the more cozy portions of the city.

This is the kitchen area of Faye’s Underground Home, filled with recognizable cabinetry and appliances, despite the cave-like surroundings. A tile floor adds another dose of homey comfort.

Here is the bar inside Faye’s, an immaculate little space for relaxing, with its own natural light port hole for good measure.

This incredibly comfortable underground space even features its own built-in fireplace.

Here’s a close look at one of the residential entrances. With a large overhang, there’s plenty of shaded space for relaxing outdoors in the heat.

This aerial view of the above-ground portion of Coober Pedy shows off the vast scale of the place in a way that no interior shot could. What’s industrial above is cozy and welcoming below. 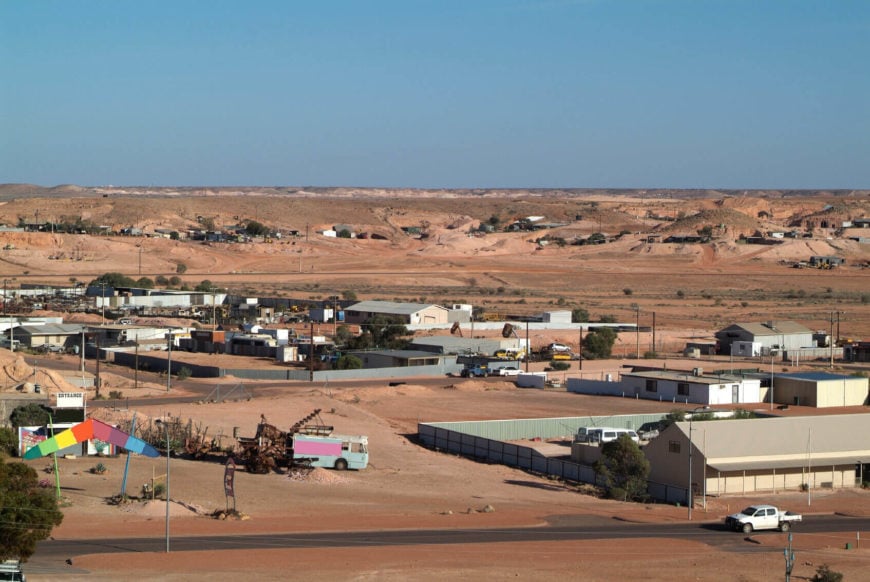 This old entrance is piled up high with stones to keep would-be snoops out. As the mining operations move further down the shaft, the entrances change. 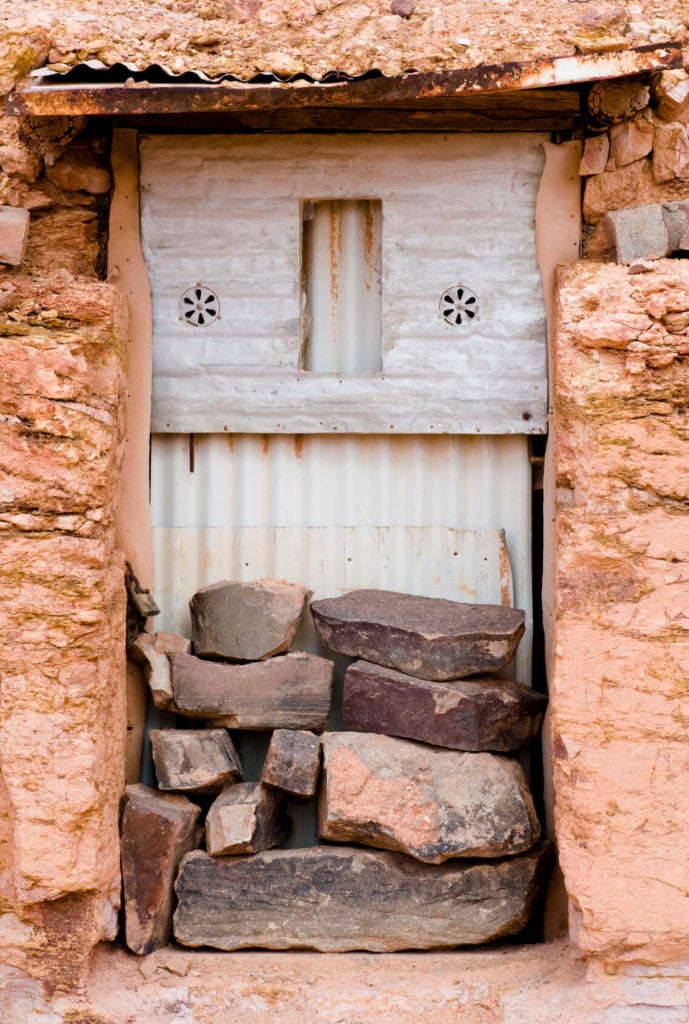 Standing out against a seemingly lunar landscape, this warning sign seems like something out of a Road Runner cartoon. 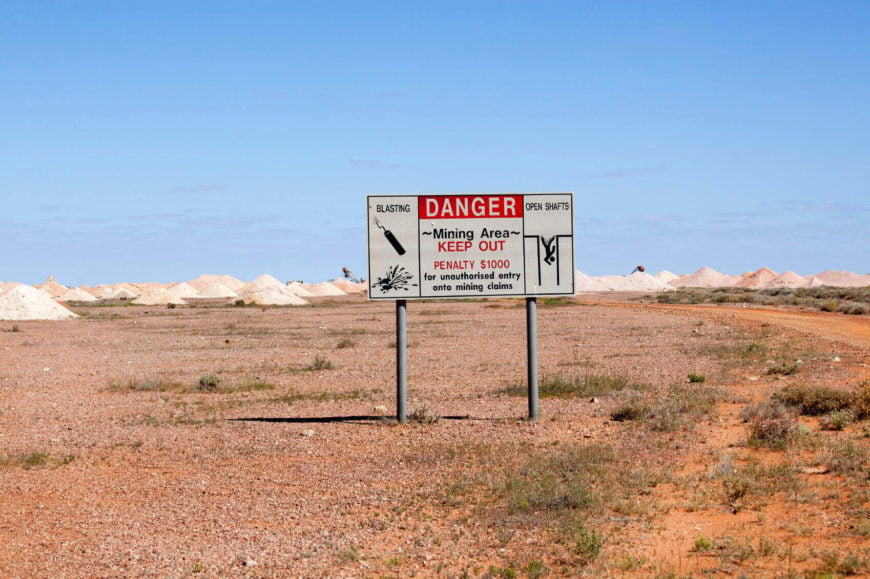 This is one of many vertical shafts built into Coober Pedy, a commonplace hazard for anyone in the area. These provide important ventilation to the underground city. 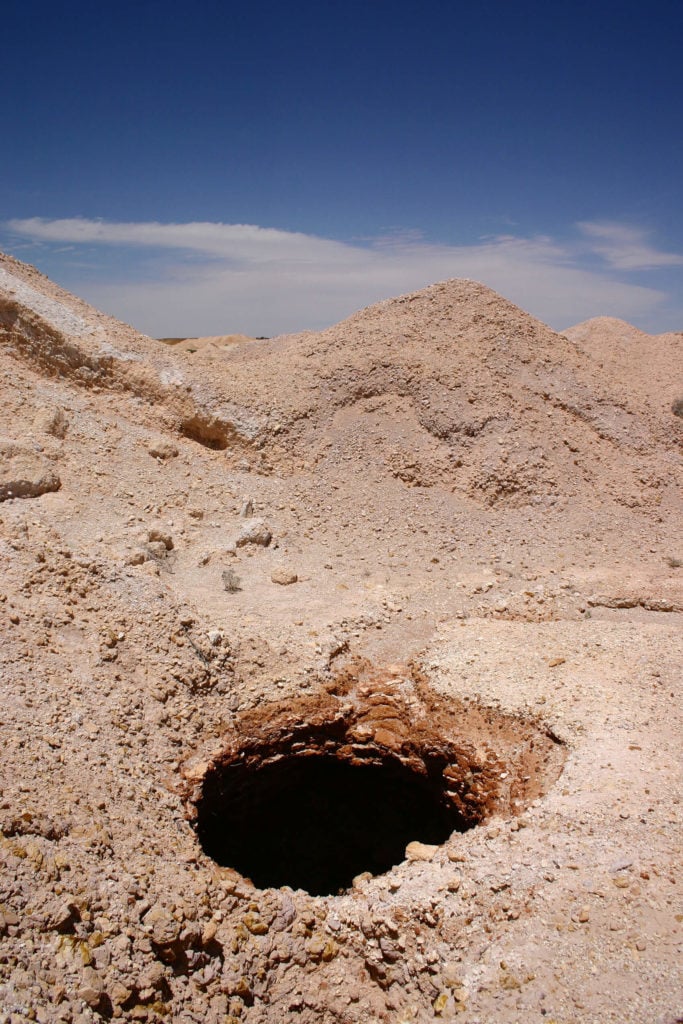 Here’s a truly luxurious hotel bedroom, a space as well appointed as any found above ground. The unique patterns in the carved stone make for a more interesting visual space than most man made options.

In the literally cavernous restaurant interior, we see a traditional cafe style setup with small black tables, artwork on the walls, and a warm lighting scheme.

With sleek modernist furniture and a rich natural wood feature wall, this living room wouldn’t look out of place in a classic James Bond movie set.

This is an interesting angle, showing off the intersecting layout of Coober Pedy. Layers of tunnels meet in unique and fascinating ways.

The Desert Cave hotel even has its own hair salon, one of many normally surface-bound luxuries found below the earth.

Directly above the residential areas, standard plumbing vents dot the landscape instead of rooftops.

Here’s another almost comically extreme warning sign. It’s a truly strange part of the world, after all.

The residential units may be underground, but they share almost all the conveniences of a normal home, including garages for the residents’ vehicles.

They really can’t stress the risky nature of this place enough!