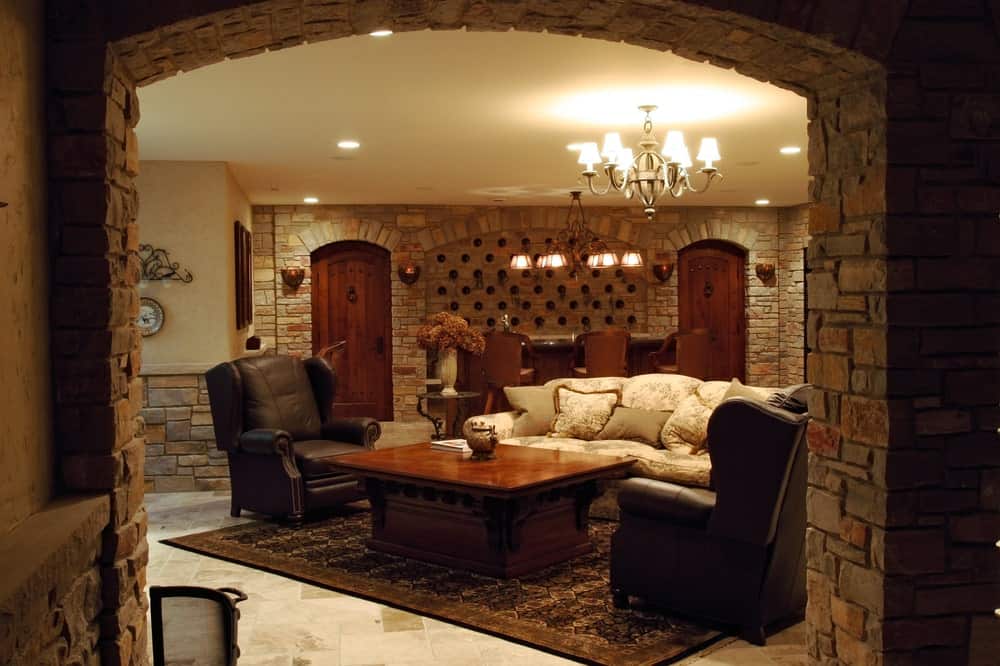 Some might remember your great-grandparents referring to the “cellar.” They stored their fresh fruits and vegetables, their wines and liquors, and various other things there. Most grew up thinking a cellar and basement were interchangeable.

It turns out we’ve mistaken three subterranean areas for something else. The cellar, basement, and crawl space all represent the bottom of a house. They’re traditionally dank, dark, and spider-y. We use inventive excuses not to go down there. What are each of them, and how are they different and alike?

What Is A Cellar? 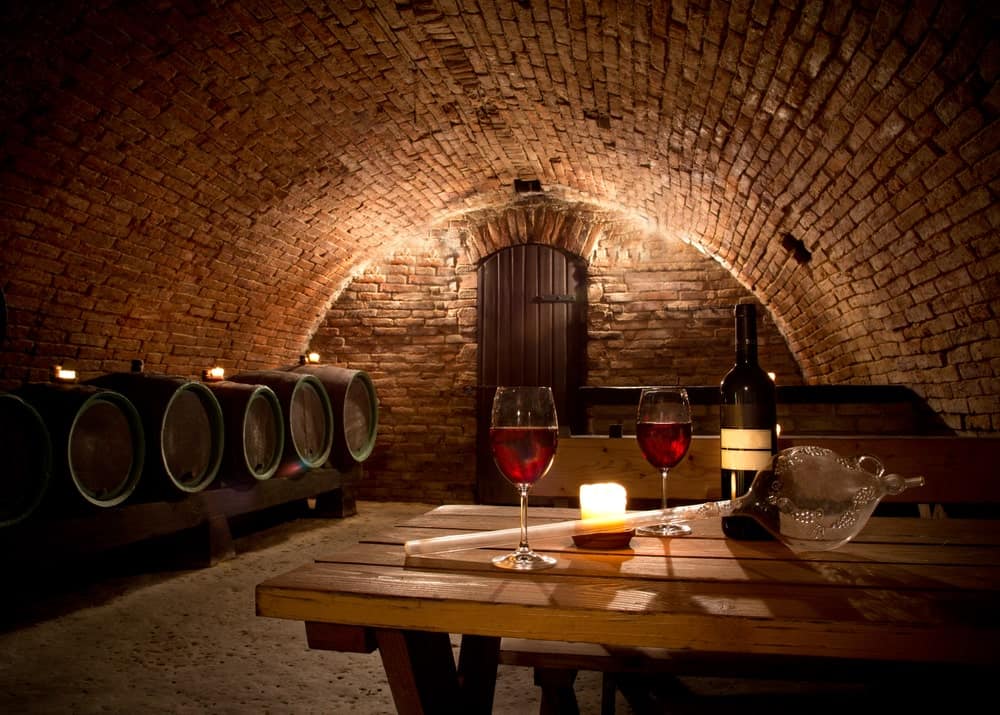 A large underground wine cellar featuring a wooden table and chairs set and has brick walls and ceiling.

A cellar is an underground room. No sunlight enters a cellar. Temperatures remain steady and cool. Humidity can be adjusted.

Cellars are used for food and wine storage. With no sunlight hitting the food and liquids, the use by date is extended. Modern cellars have temperature control measures to ensure this. “Store in a cool, dry place” was invented by cellars. 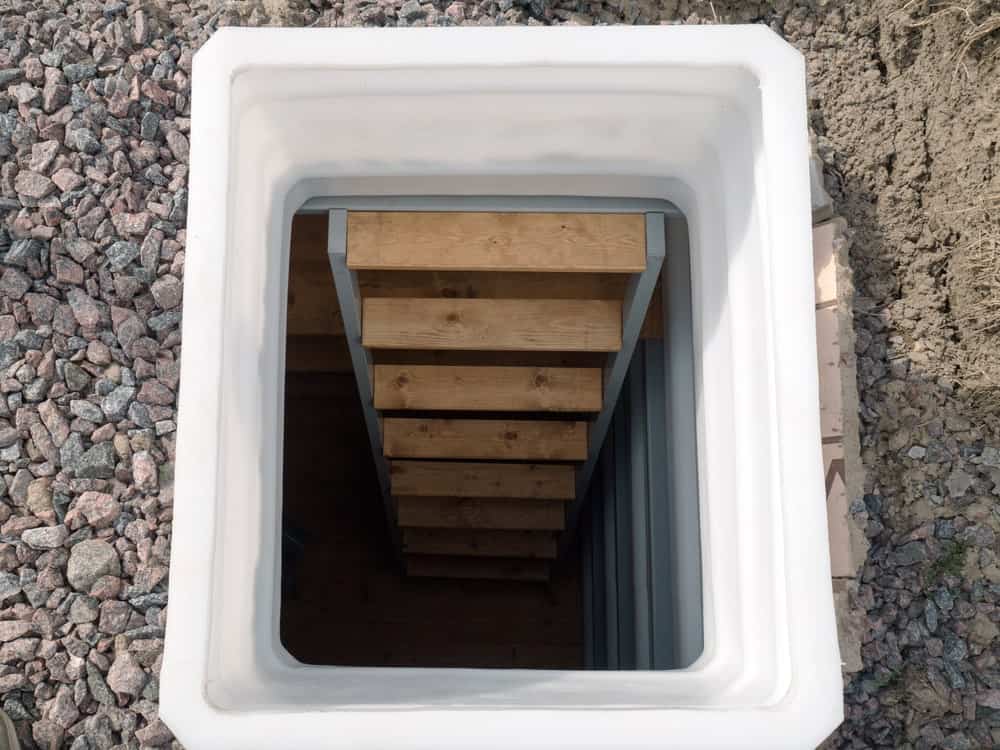 A downstairs way to this home’s root cellar. The staircase is a straight-type with wooden steps, matching the hardwood flooring.

Root cellars can be dug when the house is being built, they can be added after the house is built (beneath the porch or off a wall of the basement,) they can be dug out of the yard or a berm. All cellars need at least two four inch vents, to be turned away from the sun (north facing is best,) at least two feet of earth over the cellar, and use a material that can stand up under wet soil.

Since cellars began their lives as root cellars, most people used to just toss in that year’s crop. Today’s cellars have shelves for filled Mason and Ball jars, fresh fruits and vegetables, and containers for rooting new vegetables. Gravel on the floor helps with moisture and humidity.

Today’s cellars are wine cellars. Involved in this are refrigeration systems, racks, construction materials, and temperature/humidity controls. Experts report the cost of constructing a wine cellar, depending on the size of the room, is around $300 to $600 per square foot. Homeowners pay an average price of $40,000 for a wine cellar, but larger cellars housing up to 3,000 bottles can go up to $100,000. 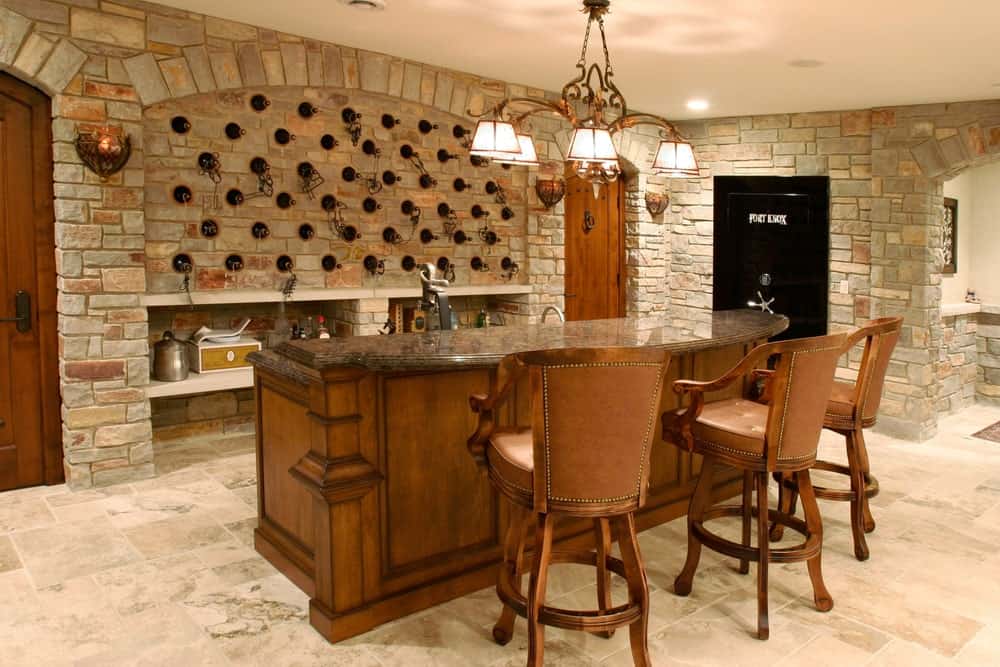 A luxurious-looking cellar with stone walls and tiles flooring. It offers a large counter with a bar lighted by a glamorous chandelier.

The pros of cellars are that food is kept at steady cool temperatures, generally 40 degrees below outside temperature, no matter the season. This prevents food rotting.

Not only vegetables and fruits are stored in cellars. If you buy a side of beef, bring home venison, or know a farmer selling whole hams, then that cellar will keep them fresh. If you churn your own butter or make your own cheese, cellars are good storage.

One of the most important cons is foods that off-gas. Apples, plums, peaches, pears, tomatoes, and cabbage emit ethylene gas which makes potatoes and other root veggies bitter. The answer is to place off-gassing fruits and veggies up near the exit vent while placing the rest lower down on the shelves.

A serious con of root cellars is critters. Mesh over the intake and outtake vents helps along with poisons placed far away from the food. Sealing the foods in tightly lidded contatiners will help. 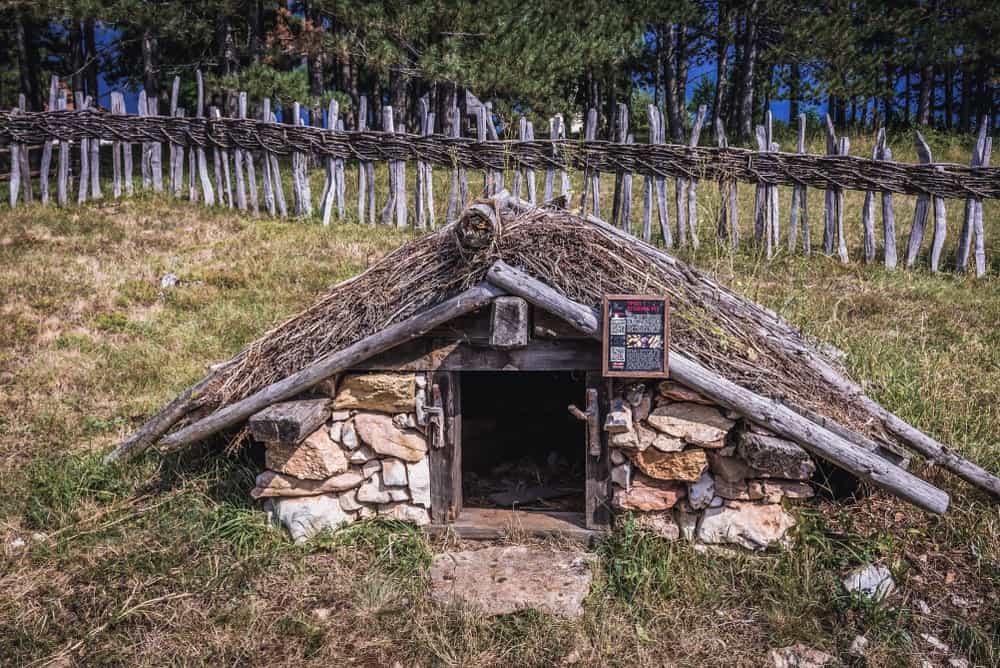 A traditional earth cellar located in a museum in Sirogojno village, Serbia. It is protected by a traditional wooden fence.

Cellars have been in use as long as mankind has known about caves. The most famous of cellars were used in Rome until the eruption of Mt. Vesuvius put paid to that. Then the cellars and caves were used for tombs. The ancient Egyptians, from the time Alexander visited in the fourth century B.C.E. Until Rome dropped by, kept their wines in cellars. Every civilization in every era has used cellars for food and wine storage; it’s just that we hear more about the wine than the storage.

What Is A Basement? 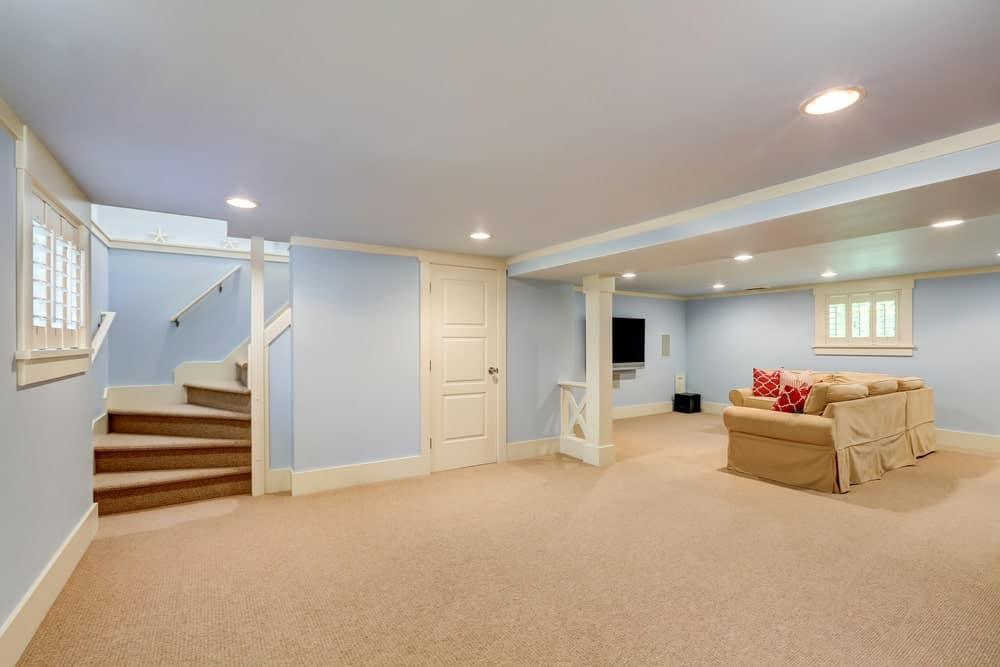 A spacious basement with pastel blue walls and beige carpet flooring. It offers a nice brown sofa set and a TV on the wall.

Americans define a basement as a cellar. It’s a room partially or completely below street level or the ground. Most businesses don’t have one which makes basements residential in nature.

Basements can be finished to furnish rooms for people to occupy, as storage for a home business, or as rooms with a dedicated purpose such as a home gym, a media room, a home office, or a combination. 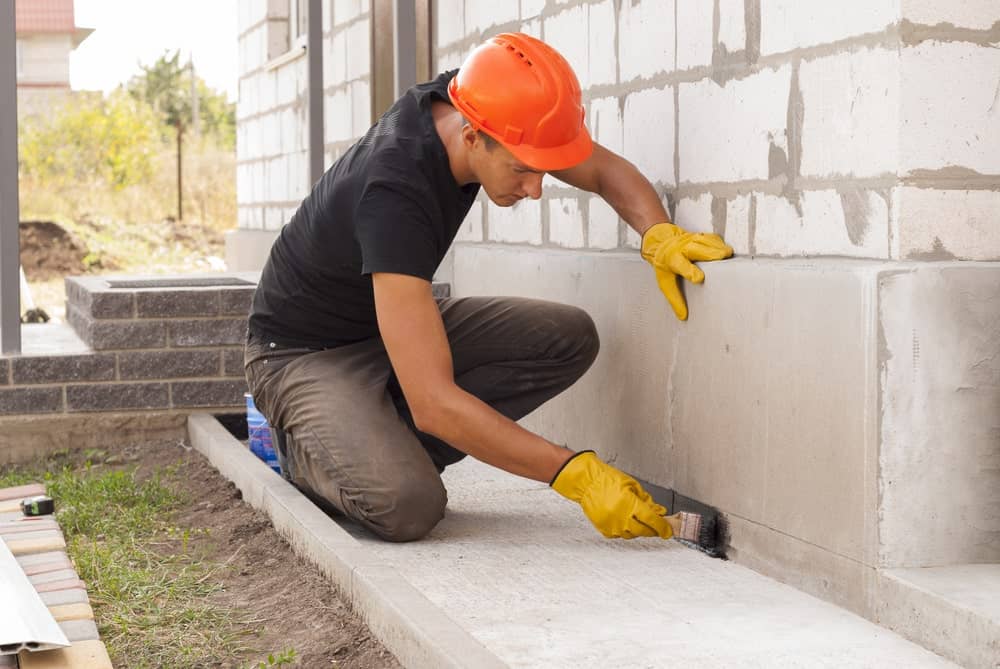 A look at this man finishing the exterior of this home’s basement area.

Since the basement is the base of a house, it can be constructed using poured concrete forms, concrete blocks, precast panels, and stone or clay tiles. All are strong, but all have commonality regarding water seeping through them.

An unfinished basement will contain the water heater, the air exchange for the HVAC unit, and perhaps a washer and dryer. Finished basements could offer bedrooms, bathrooms, perhaps a small kitchen and laundry room, a living area and perhaps a home gym or home office. Some offer extra doors and windows cut out for more natural light and as extra methods of egress.

Some feature a bar area close to a wall to wall plasma TV. Some finished basements are set up as gaming rooms for gamers complete with food preparation area and stocked with food and drink. 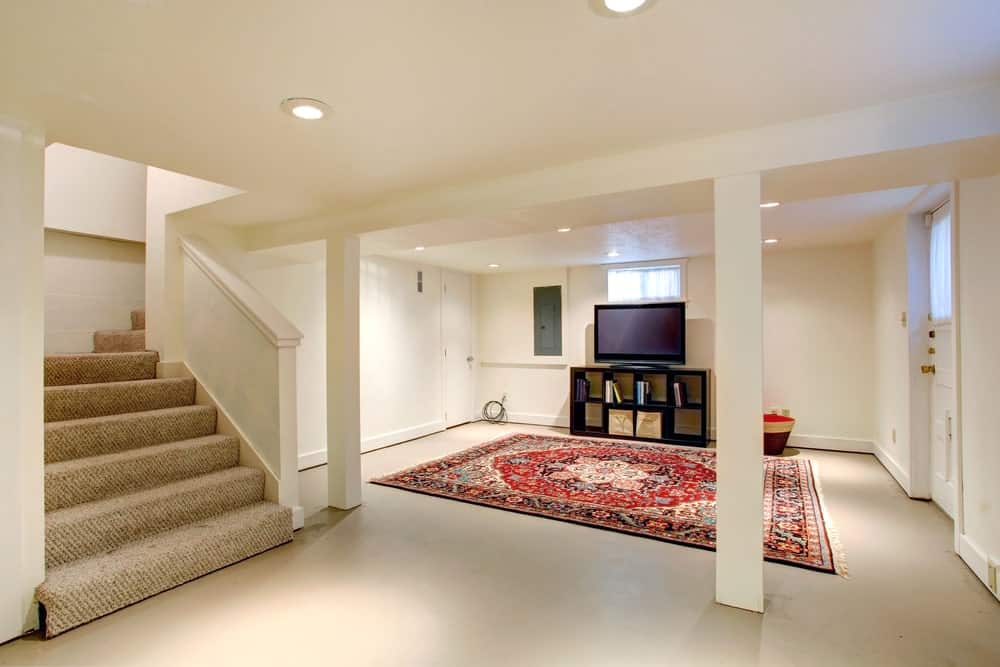 A large and modish basement with white walls and ceiling. It also has a large area rug and a TV stand with multiple shelving. There’s a widescreen TV as well.

The most attractive pro of basements is the extra living space or storage space. This is a must for families with teenagers needing their own “apartment,” grandparents who move in, or adult children needing a place to go.

The square footage of the house is increased which will look good at sale time. Adding a safe space in violent weather events will look attractive to buyers as well as cool rooms in the summer.

Cons include ground water seeping up into the basement with the related mold and mildew problems. Mobility issues are a con for senior family members staying in a basement apartment. 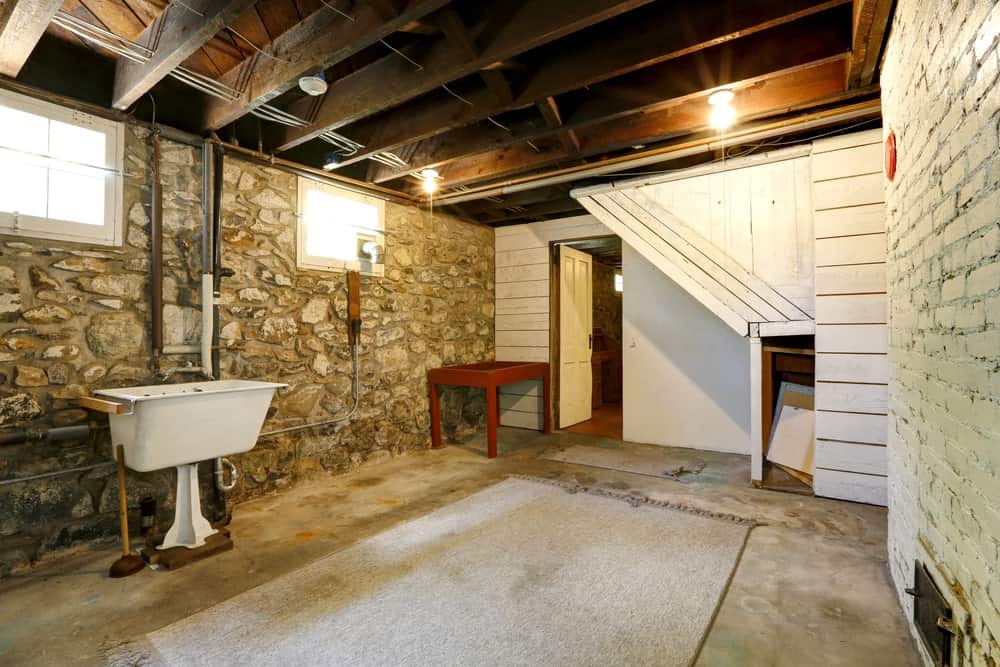 An empty basement featuring stone and brick walls along with a rustic ceiling with several exposed wooden beams.

Remember that life before the Industrial Revolution in the late 1800s was agricultural or agrarian. Rooms beneath houses contained not only food but, in rich households, the people that prepared it as well as other servants. Curing rooms for meats, rooms for storing dairy and other delicate products, and laundry facilities were located here as well.

Following the Industrial Revolution, the world’s population increased, so living space was at a premium. Basements were still used for storage, but people lived companionably there.

The other side of the coin is the areas of the country that can’t sustain a basement. Such areas include proximity to water like the sea, dams, and/or mighty rivers (read Mississippi,) deep cold areas where freeze-thaw could damage the foundation, or in earthquake-prone areas.

What Is A Crawl Space? 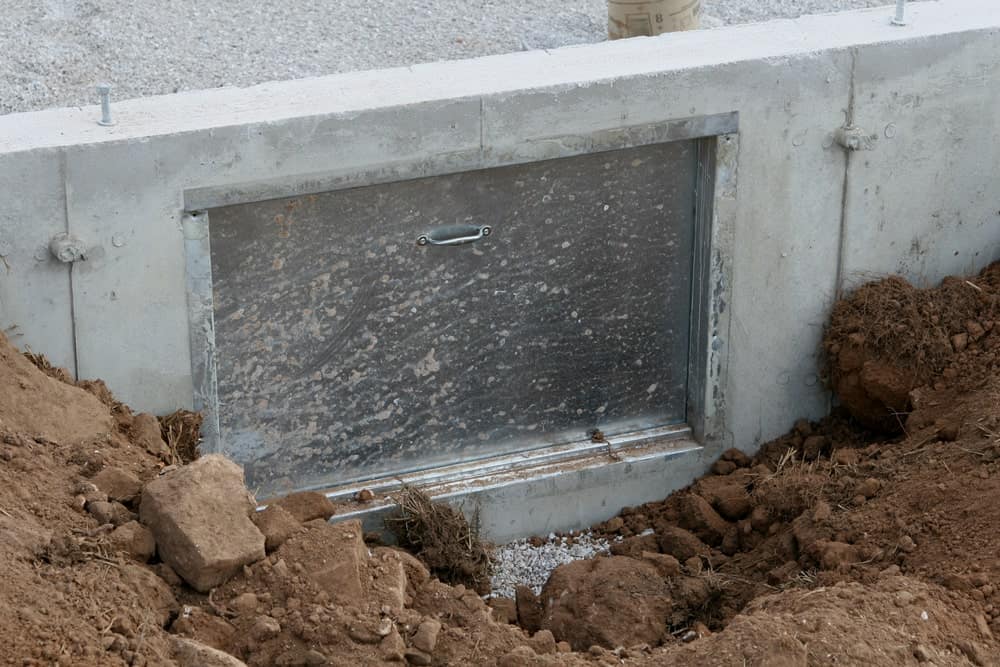 A focused look at this crawl space’s entry doorway.

Elevating a house off the ground, a crawl space houses the plumbing, wiring, HVAC things like ducts and the aforementioned insulation. These things would otherwise be taking up space somewhere in the house. 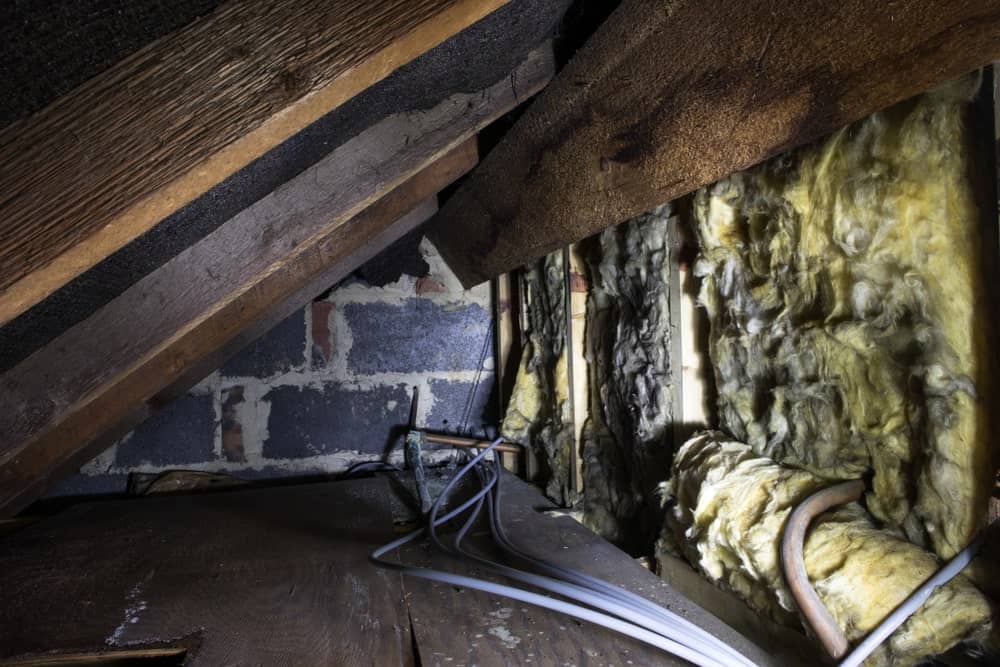 A crawl space of a house its old boarding, stone walls and large wooden support.

When the drainage taking water away from the house is built, the builder will build a concrete block wall around the footprint of the house. On the outside of the block wall will be bricks. The stonemason will use mortar to build up the brick to the height of the concrete block wall. The house will be built atop this foundation.

It’s the bottom of the house, what can we say? It doesn’t lend itself to interior design. However, a vented crawl space has problems of its own such as moisture, the resulting problems like mold and pests, and a somewhat less than good effect on the indoor air quality. 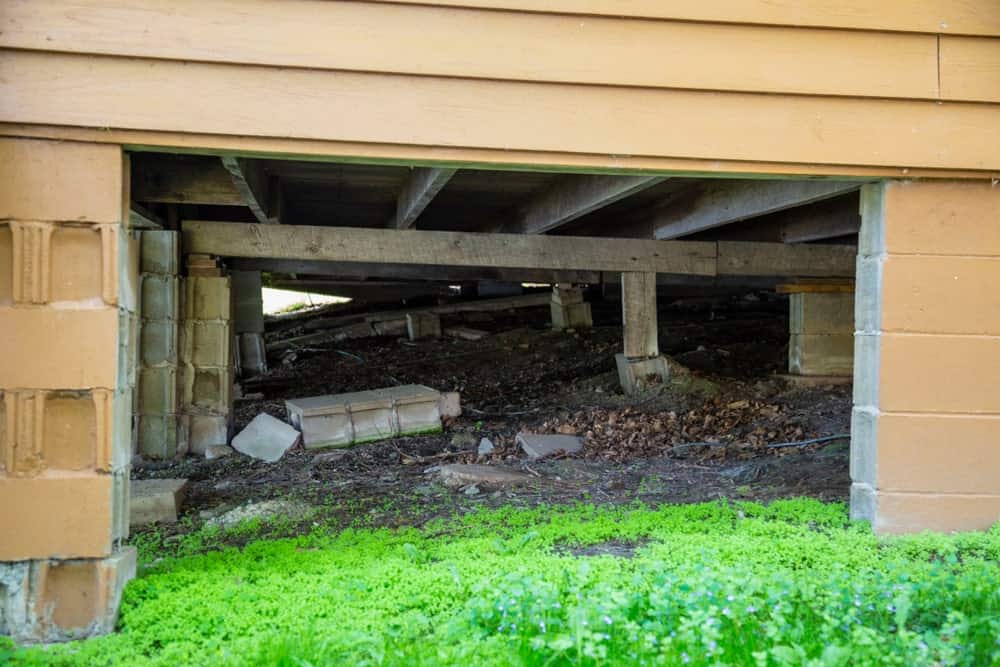 A view at the house cabin’s underneath showing its structure and foundation.

For most homeowners, the first and foremost consideration is the money. Crawl spaces are cheaper to construct than basements. Encapsulating a crawl space protects against moisture and critters better and cheaper than protecting a basement.

Access to the major systems of a house is one of the best things about a crawl space. Digging up the yard to access plumbing isn’t necessary, and the ducts for the HVAC are within easy reach. Repairs and/or replacement are cheaper.

Crawl spaces are found in every climate and land type, but you’ll find them most in wet areas like low-country boggy areas and seaside. The floor above the crawl space will be extra-well insulated, which will mean warm toes on the warm floor.

As far as cons go, rodents and squirrels can get into almost anything, and crawl spaces are an open invitation to build a condo in your house.

Moisture means termites and other bugs unless there’s a moisture barrier in the crawl space. Moisture also means mold and mildew as well as the damages they can cause. Homeowners with crawl spaces must keep an eye on them to avoid the damages caused by moisture, pests, and small animals. 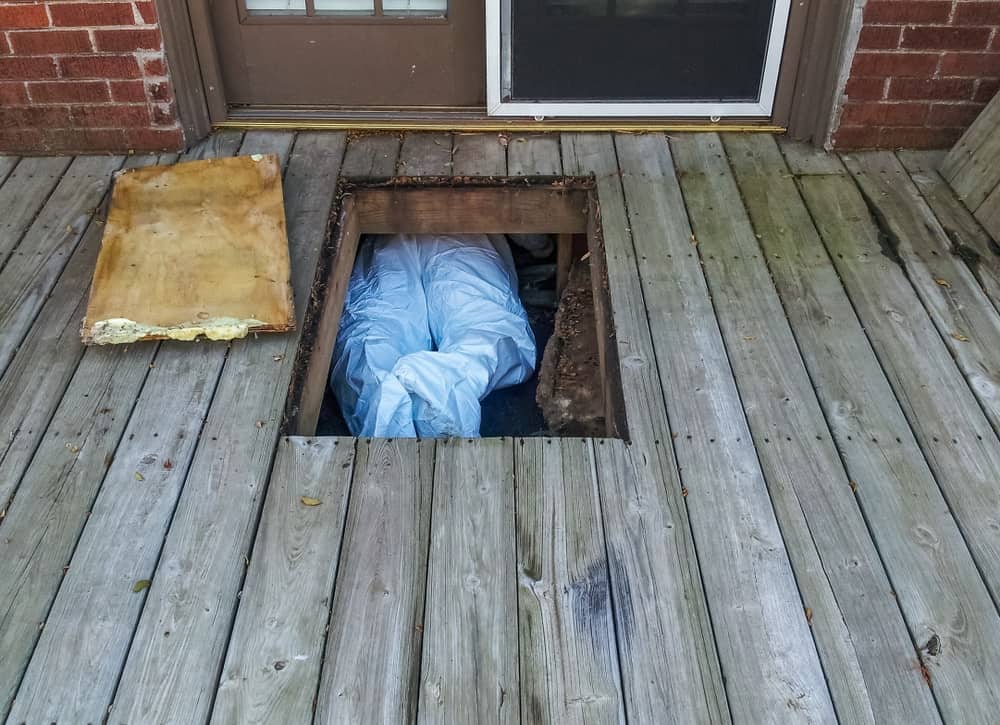 A workman crawling to the home’s crawl space set underneath the deck.

If you look on the Internet, you’ll find no discernible history of the crawl space. However, common sense tells us that sub-floor areas have been used since housing was developed. Crawl spaces and root cellars were dug out for storage and continues to this day.

Which Should You Build?

Now that you know the differences between crawl spaces, basements, and cellars, you have to wonder which is right for your type house. Ask yourself some questions before the architect puts his CAD/CAM into use: