Gallery featuring images of the Bright and Brilliant Blue Hills House by la SHED Architecture, a minimalist home in the forests of Quebec. 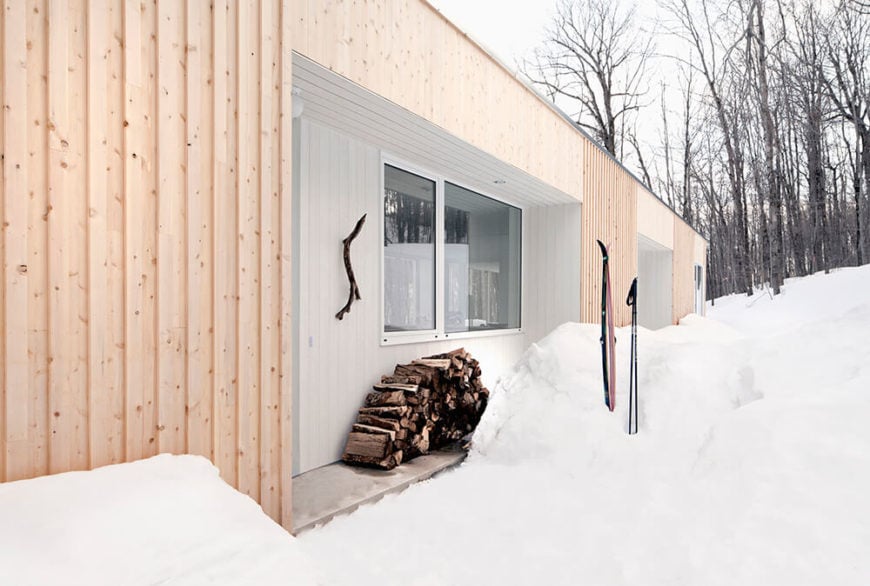 Welcome to our gallery focusing on the bright and brilliant Blue Hills House by la SHED Architecture.

The Blue Hills House is tucked into the forested hills of Morin-Heights, Québec, and was designed as a refuge from urban life.

The structure is a 2300 square foot home with adjoining garage, nearly hidden from the street amidst the trees.

The home was designed to be camouflaged in its environment, framing a discreet elegance. The interior, however, is an open design flush with subtly bright grandeur.

The low height, single story design helps reduce the home’s environmental footprint, while close attention was paid to preserving the existing vegetation during construction. The entire process was meant to leave as little impact as possible on the environment, and it shows.

Moving into the interior, we see how each discrete space has a direct visual connection to the outdoors via broad windows and doors, which serves to visually extend the home to the outdoors. Natural lighting and interaction are consistently emphasized throughout the home.

Openings on the exterior of the building were placed inside a series of alcoves, so that windows and doors can be opened even during rainy weather. While serving as protection from the elements, the alcoves also allow for a transitional zone between the interior and the environment. They also help facilitate passive heating and cooling of the home, allowing low winter sun to penetrate and heat the concrete flooring.

The open plan interior spreads from the main entrance by way of hierarchy, with common social spaces at the center and private rooms radiating outward. The kitchen separates the living and dining rooms in a larger open area. Its twin islands cement its function as a welcoming space.

Broad openings at the ends of this common space are equipped with glass sliding doors for a closer communion with nature. Features like the fireplace and integrated furniture are built between alcoves in order to leave the main space a minimalist, open aesthetic.

The use of authentic and raw materials, like the wood on the walls, marble in the bathrooms, and polished concrete flooring ensure strength and stability for the home, while presenting a naturally beautiful appearance for years to come. 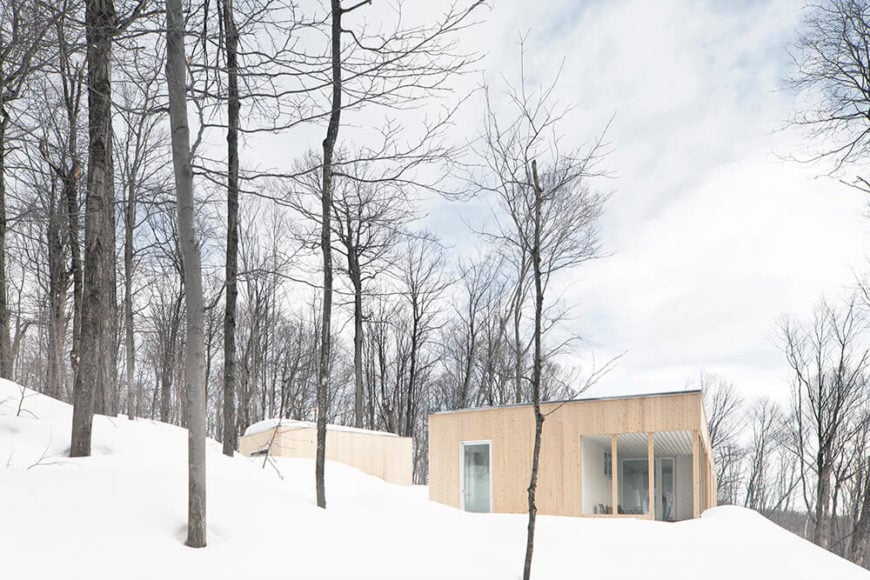 Tucked into the pristine snowy hillside, we see the light natural wood elegantly rising along with the surrounding forest. Large expanses of glass allow for a direct connection with the interior. 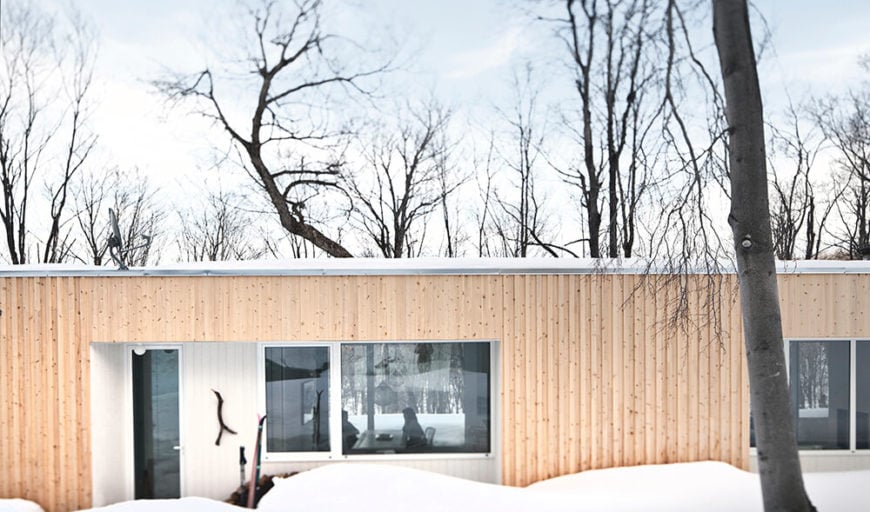 Here’s close look at one of the alcoves on the exterior, painted white to better differentiate its function. These allow for passive protection from the elements, while helping foster a connection between the interior and the outdoors. 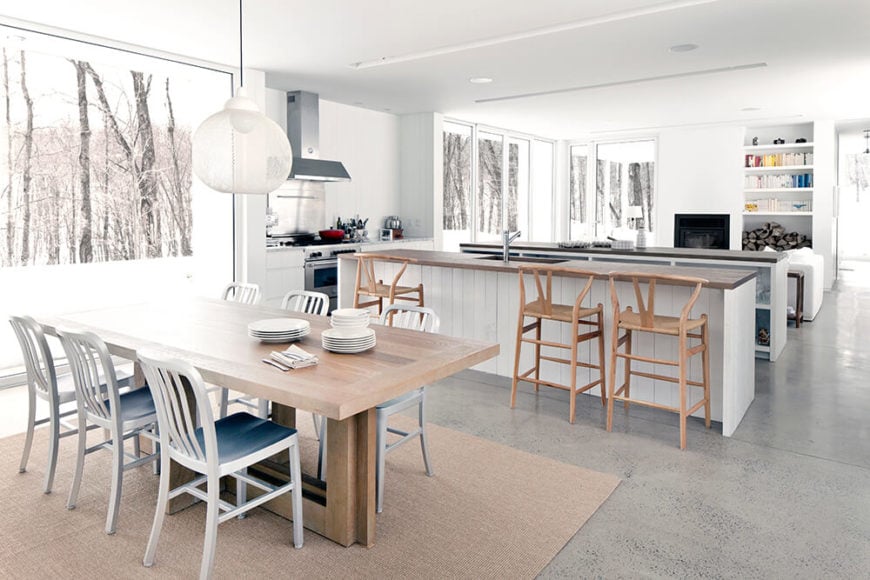 Inside, we see the vast open space at the heart of the home, combining the dining, living room, and kitchen functions. The light use of natural wood tones acts as subtle contrast in the nearly all-white interior. 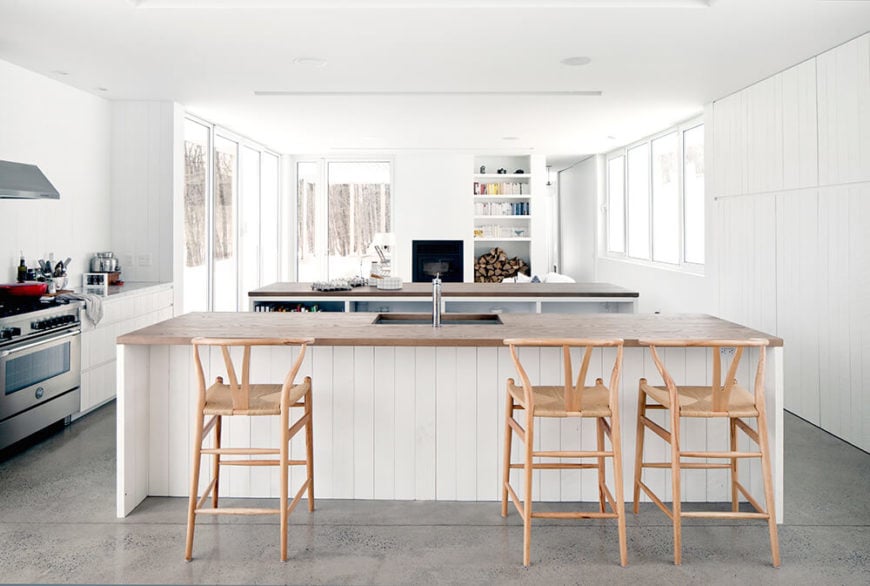 Viewed head on, we see the pair of large islands that define the kitchen within the larger open space. Natural wood countertops add contrast and another connection to nature. 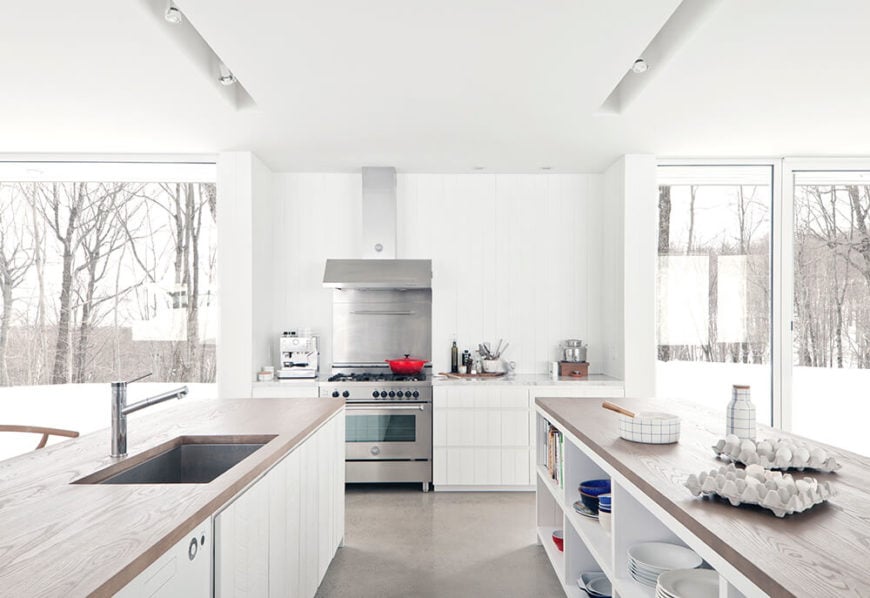 The kitchen spikes its all-white surroundings with stainless steel appliances and subtle recessed lighting. The island at right features an abundance of built-in storage. 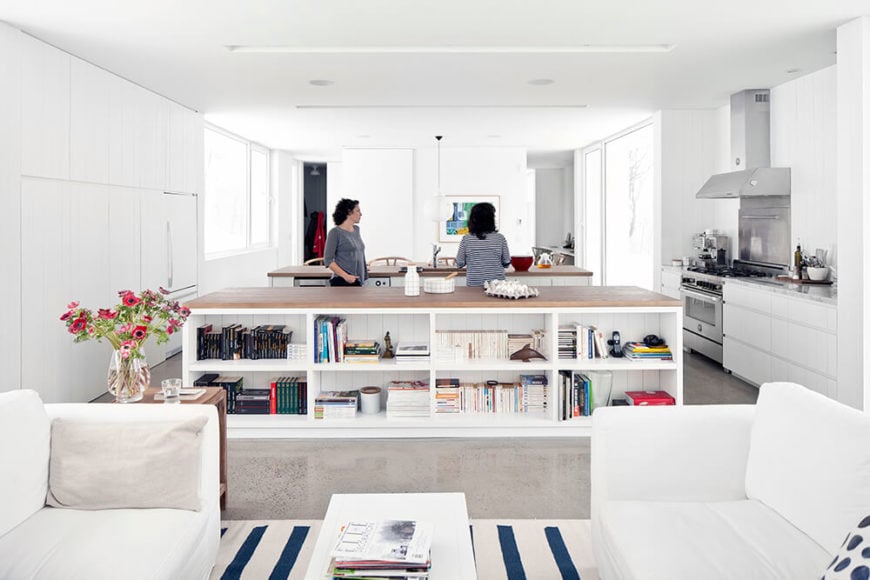 Moving back into the living room part of the open plan space, we can see a pair of white sofas on a white and blue striped rug facing over a similarly white coffee table. The outer side of the kitchen island features shelving for books, helping differentiate the functions within this large room. 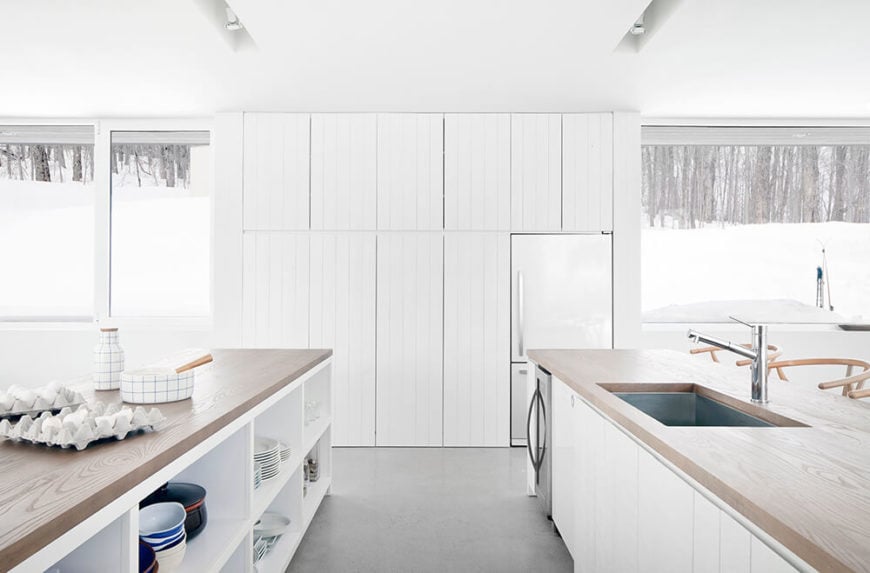 The opposite kitchen wall is a series of uniform cupboards that blend perfectly into a whole. The sleek stainless steel refrigerator is tucked into the right side, between two expanses of large windows. 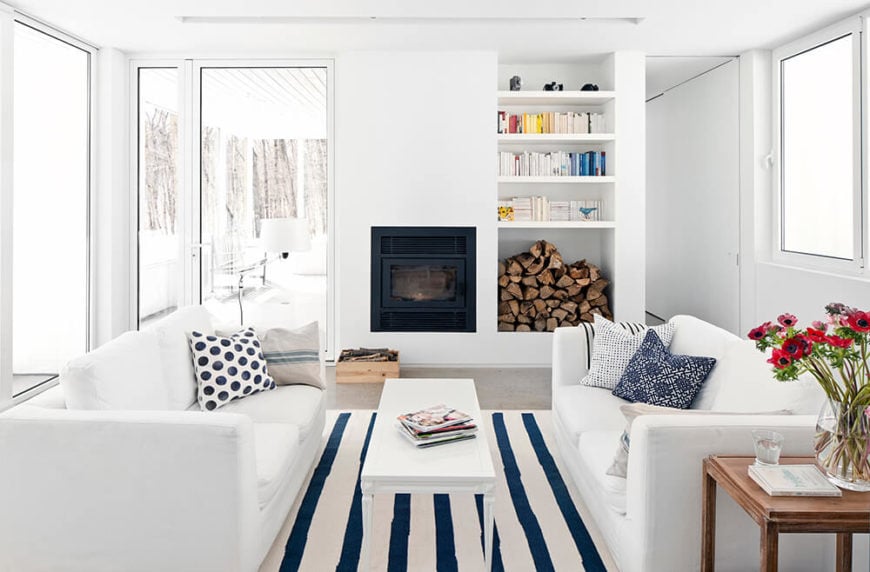 The living room ends with a fireplace built into the wall, plus an adjacent shelving and storage alcove that holds both books and a supply of firewood. 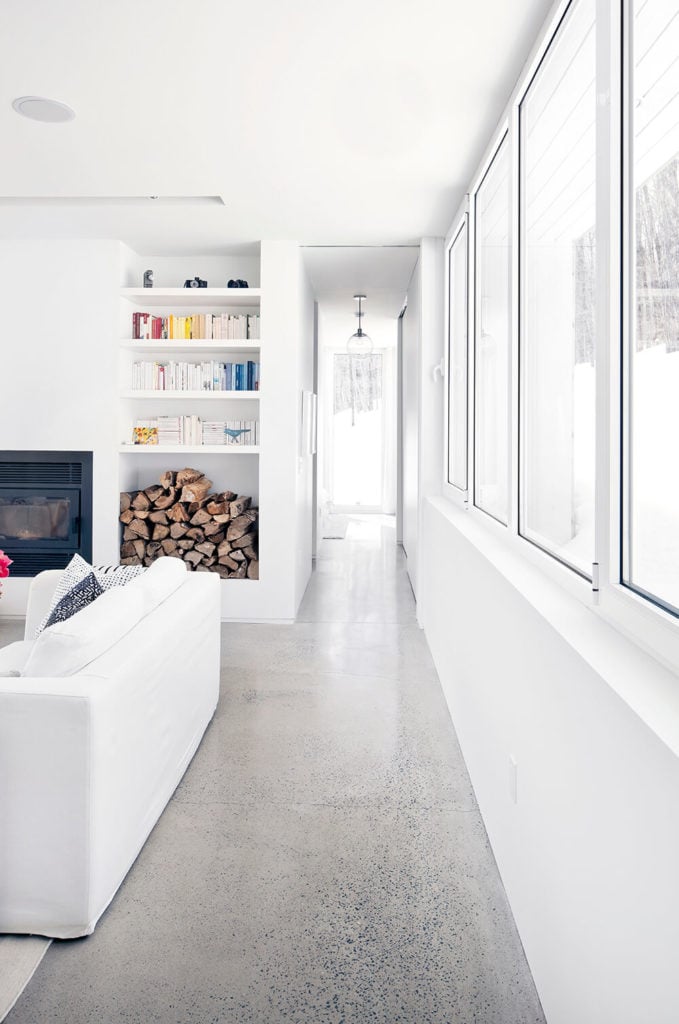 Past the set of broad windows, we can see a hallway extending toward the bedrooms. The polished concrete flooring connects and unifies every disparate end of the home. 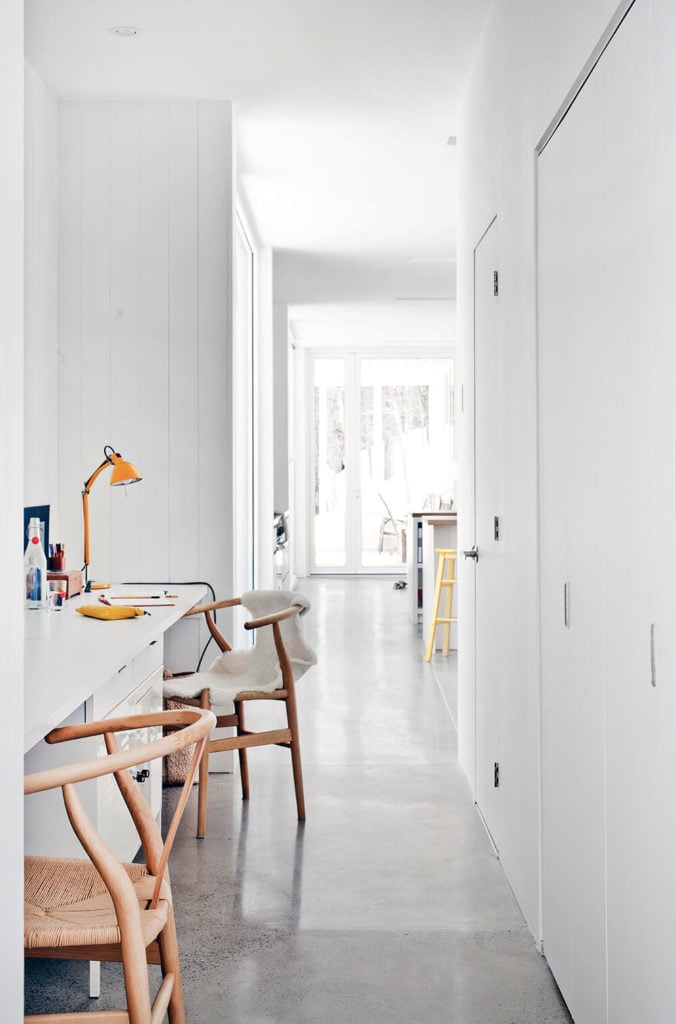 Extending from the central open space, this hall leads to the private areas of the home, bedrooms and bathrooms. A slim desk is built into the alcove at left for convenient work space. 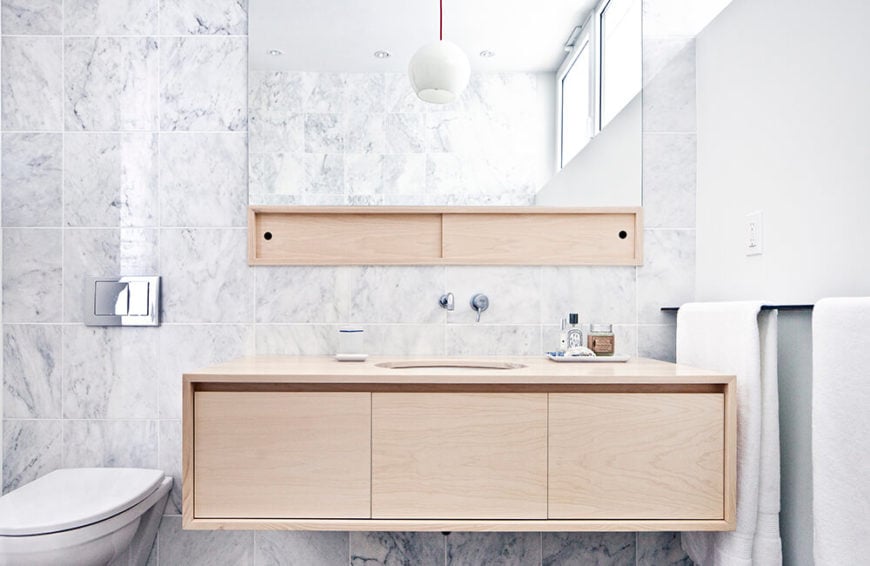 The bathroom is awash in rich marble, contrasting deeply with the light wood tones of the vanity and mirror shelving. This helps stylistically define the bathrooms from the rest of the home. 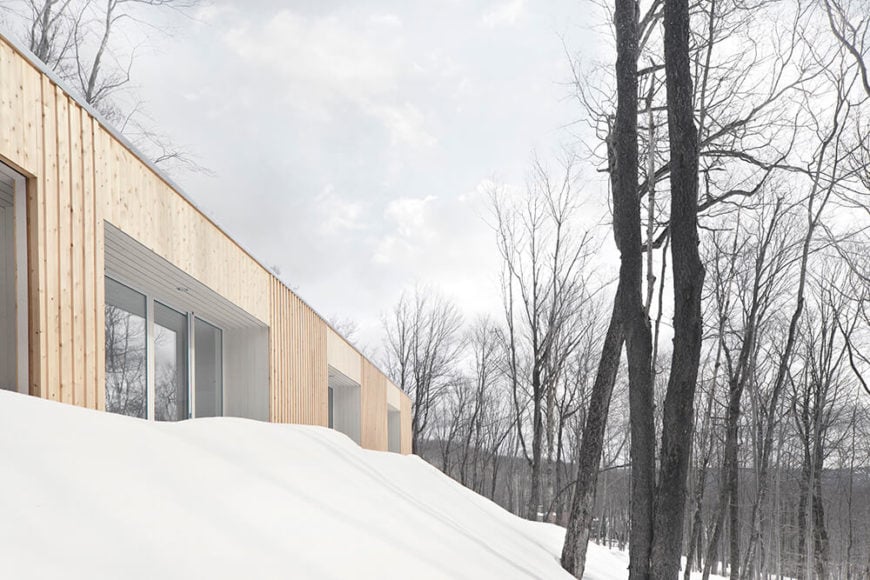 Seen from a low slope, the alcoves on the exterior appear thick enough to solidly define the interior and hide the windows from direct sunlight in the summertime. Here in winter, they allow the perfect amount to penetrate the interior. 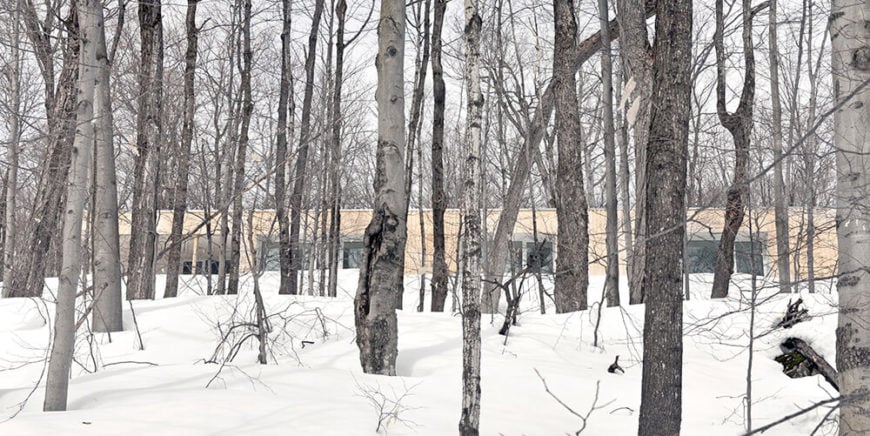 Viewed from afar, we can fully appreciate how well the home has been integrated into its natural environment. 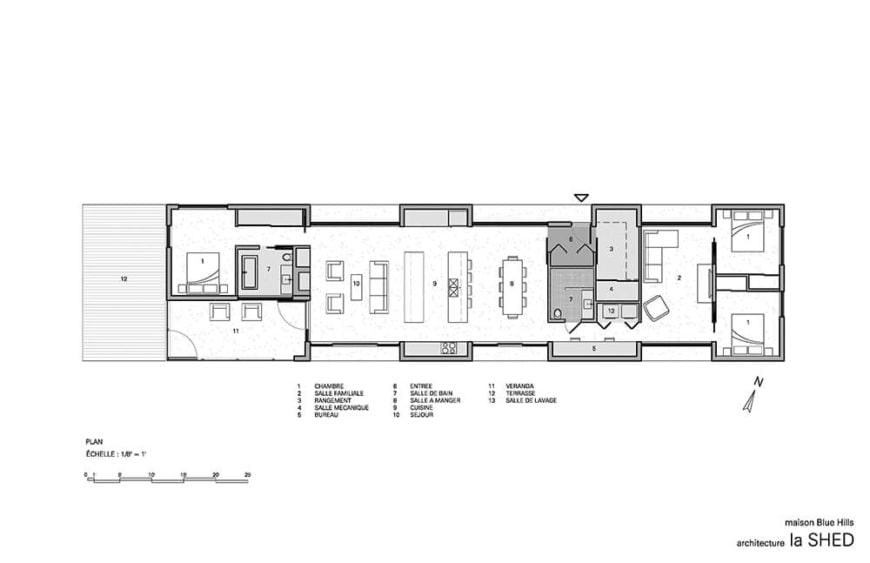 Here’s the floor plan to help you fully appreciate the simplified layout of this home.

Related Homes & Galleries You May Enjoy: