Check out the tropical getaway where Barack Obama spent some of his Christmas vacations. The 6,000-squre-foot home boasts an open floor plan with a gourmet kitchen, five bedrooms, and six baths. Other highlights include a lagoon-style pool and outdoor wet bar. The home can be rented for $4,500 per night. 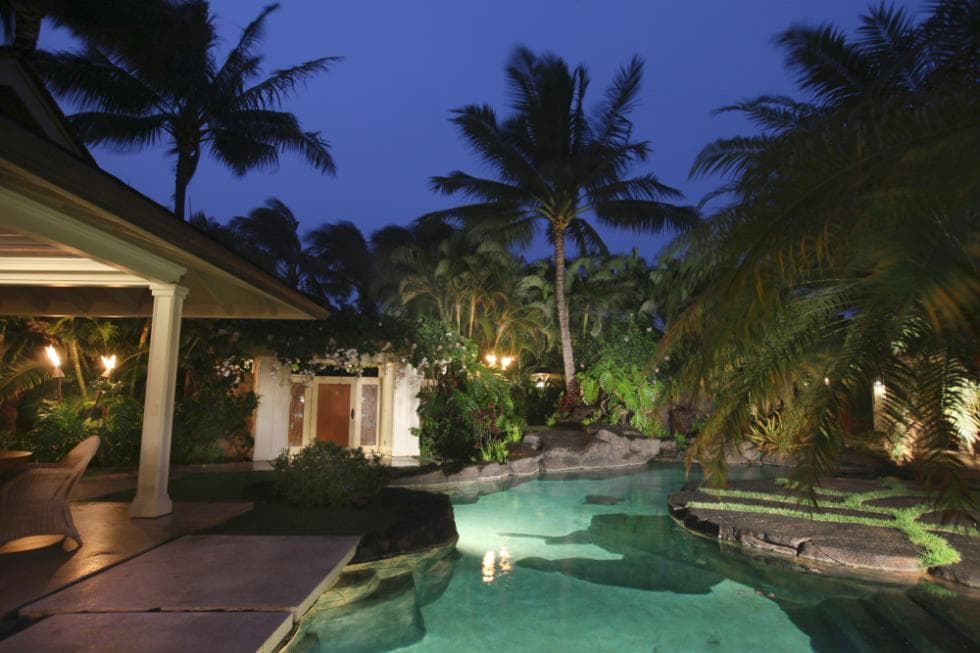 During his first few years as United States President, Barack Obama and his family spent their Christmas vacations at a posh estate that they rented in Kailua Bay, Hawaii.  Now, others can spend their vacations there too — for $4,500 per night.

Nestled in Paradise Point, Plantation Estate is landscaped with coconut trees and native plants.  It provides almost infinite opportunities to take advantage of Hawaii’s year-round summers.  There are several waterfalls on the property, along with lanais.

The latter is a classic staple of Hawaiian architecture.  Similar to a porch, a lanai is covered, so you are protected from rain or blistering sun.   However, it’s open on at least one side and usually leads to more outdoor space, so you can still get all the benefits of the tropical environs. 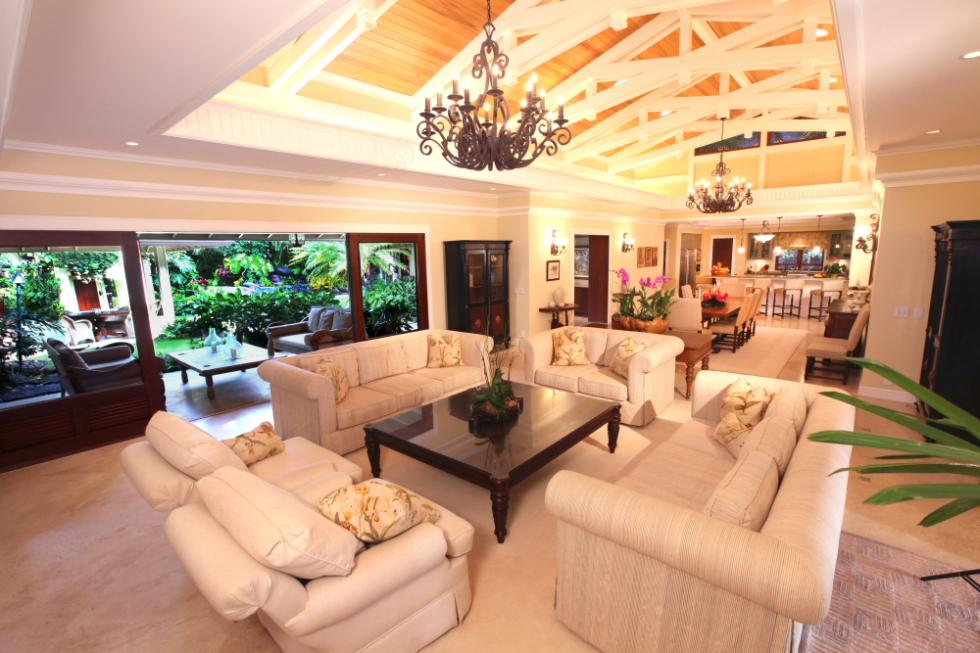 This is the great room that houses the living room, dining and kitchen. It has a tall arched wooden ceiling with exposed beams and a chandelier hanging over the glass-top coffee table surrounded by a sofa set. Image courtesy of Toptenrealestatedeals.com. 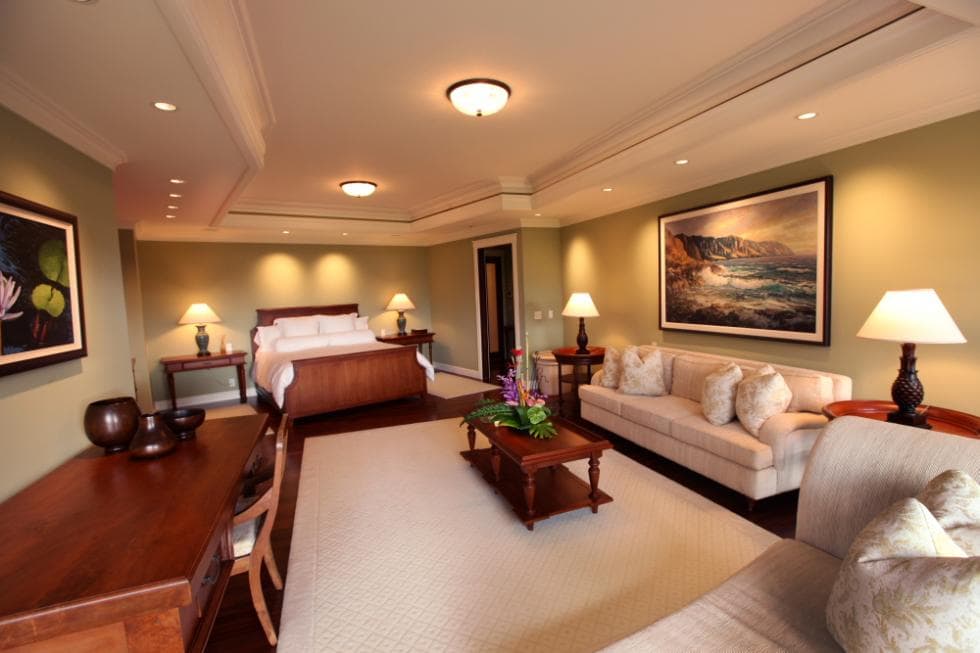 This is the spacious bedroom that has a large wooden sleigh bed on the far side. It has a sitting area with a sofa set at the other side of the room. Image courtesy of Toptenrealestatedeals.com. 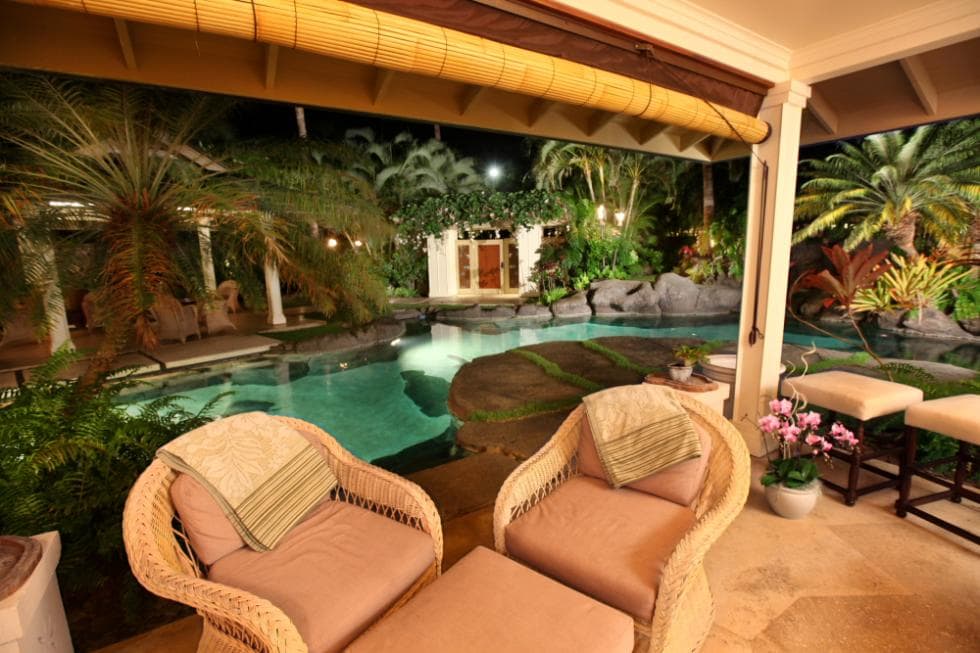 This is the covered patio right beside the lagoon-style swimming pool. This area is fitted with woven wicker armchairs adorned with potted flowers. Image courtesy of Toptenrealestatedeals.com. 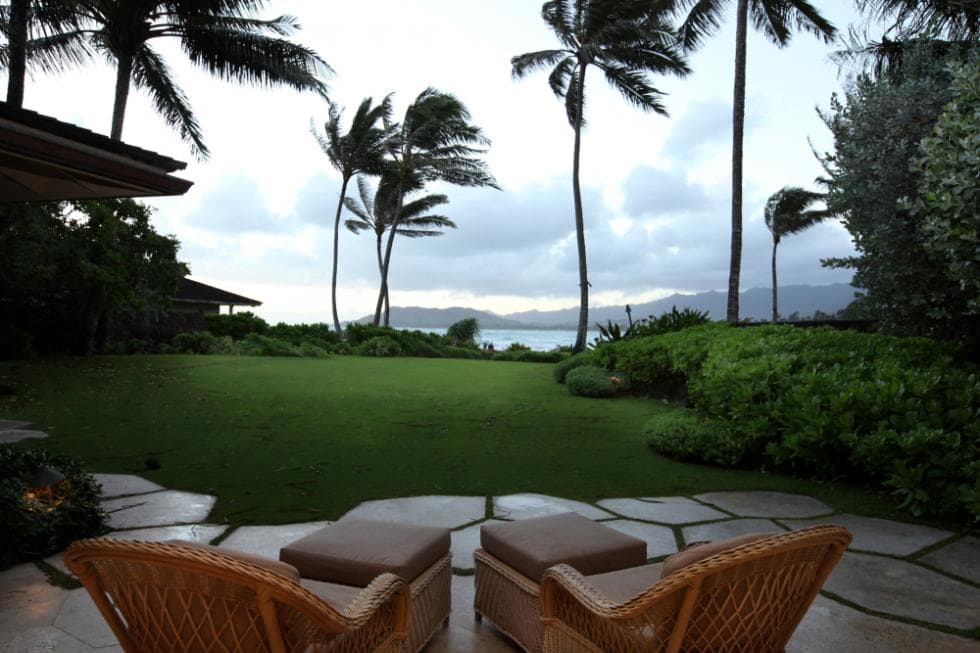 This is the view of the see from the outdoor patio of the house that has a mosaic stone flooring fitted with a couple of woven wicker armchairs. These are complemented by the tall palm trees and a large grass lawn. Image courtesy of Toptenrealestatedeals.com.

There’s also a lagoon-style pool, where the Obamas may have enjoyed a Christmas morning swim.  (How many of us can do that outdoors in the winter?)   Right next to the pool is a covered patio furnished with wicker chairs.  Beyond the patio is a stretch of lawn dotted with palm trees, leading to serene ocean waters.

There’s a wet bar outside, too.  But one of the most outstanding outdoor features here is probably the 7-foot lava wall that functions as a fence, secluding the pool and other outdoor areas.  To enhance the sense of privacy, the estate is located in an enclave of dead-end roads with houses spaced fairly far apart.

This home has some features that set it apart.  Mahogany is incorporated into much of its design.  Large stained-glass windows capture natural light in beautiful displays of color.

The inside of the 6,000-square-foot home is equally impressive.  The great room certainly lives up to its name, housing the living and dining rooms and gourmet kitchen.  A chandelier hangs down between the exposed beams of the high, arched ceiling.  The open-air design of this home makes it seem even larger than it is.

This palatial mansion also has five bedrooms and six bathrooms.  To get an idea of what you’d be getting if you rented it, let’s check out one of the bedrooms.  For starters, it’s huge.  There’s room for a large sleigh bed and s sitting area across from it, with plenty of floor space to spare.

The home is considered one of the most luxurious beachfront resorts in the world.  Kailua Bay was once frequented by Hawaiian royals.

Barack Obama was born in Honolulu, Hawaii and moved to Indonesia with his family when he was six years old.  At age 10, he returned to Hawaii where he attended a prestigious private school and excelled in academics and basketball.

He went on to attend Occidental College and graduated from Columbia University.  After graduation, he worked as a community organizer in Chicago.  He later attended law school at Harvard, where he was the first African-American editor of the Harvard Law Review.  Of course, he’s most well-known for serving two terms as America’s 44th President.