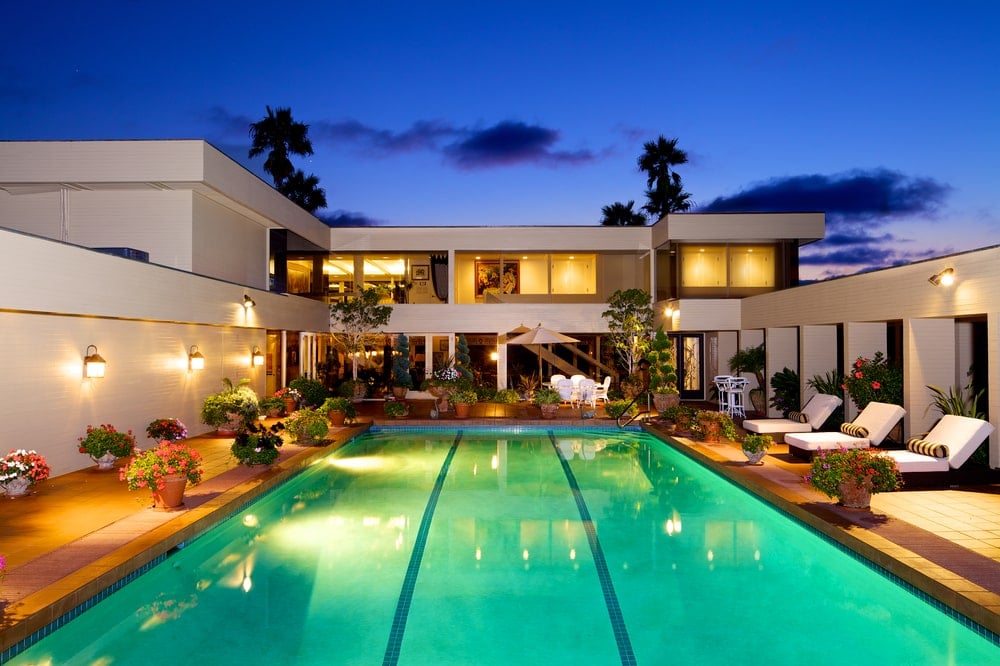 While we’re all shedding pounds the Jenny Craig way, the weight loss maven is shedding her California home. The 7,625 square foot Del Mar home began with a $39.5 million asking price in 2014 but sold in 2019 for $22 million.

The price of the almost 8,000 square foot modern style mansion began at $39.5 million but was reduced to $27.9 and most recently to $22 million. The house sits back from the road on three-quarters of an acre with 82 feet going towards the beach. The house is in the Del Mar neighborhood of San Diego.

You would expect the mansions of the rich and famous to have multiple bedrooms and bathrooms, and Jenny’s is no exception. The house has five bedrooms including the primary bedroom and bath along with six and one-half baths. Two kitchens are pretty much the norm in mansions with one facing onto the deck for access to the outdoor living area.

Walls of glass allow the homeowner to see and hear the sea crashing onto the shore. Ceiling beams in the living areas, two-sided fireplaces, and terra cotta floor tiles transitioning from the courtyard into the downstairs portion of the house give the downstairs a natural continuity.

The deck and the porch wrap around the house for the perfect view of the inner courtyard with its pool and terra cotta decking as well as the blue waters of the ocean. The house offers 82 feet of beach, a gated drive, and a four-car garage.

I love wide-open spaces with a shady place to sit and watch the natural beauty surrounding me. Jenny Craig’s house offers that with tables and chairs and lounging around the inner courtyard and on all the wrap-around deck and porch. Indoors, I love having enough space in the kitchen to create. Jenny’s house offers the homeowner two kitchens.

Jenny Craig founded her weight loss dynasty along with her husband in 1983. She came from a New Orleans family overweight due to her mother’s excellent cooking. She successfully cut down her weight and worked out at a gym she managed. She bought a franchise and added her dieting regime to the program. Over the years, she refined all of it until it became the Jenny Craig NutriSystem we know today.

Jenny sold the business two years before her husband died and then began selling off their properties. The weight loss maven continues to combine science with chef-made meals and personal support to the many believers and global members of her weight loss programs.