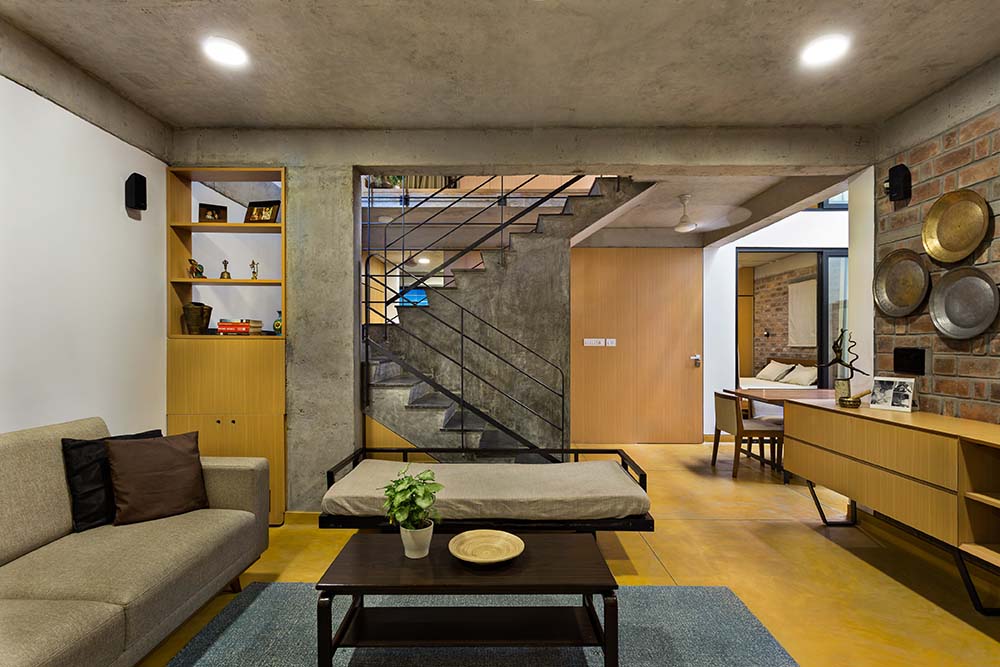 Built on a 30’x40’ North facing plot in the city of Bangalore, the program accommodates the Architects’ own house on the ground and first-floor level and her studio space on the upper two levels, with separate access to the studio in the North-East corner.

The spatial planning of the house is done in order to take maximum advantage of the uninterrupted view towards the tree-lined street on the northern side. Owing to the tight site condition and lack of privacy from the neighbor’s property, the two bedrooms in the SW corner open out into a double-height dining area with a clear story window for ventilation and a skylight above for natural light.

The two levels of the studio have been visually connected with a central cut out over the waiting area. The layout has been designed to facilitate an open studio culture, creating spaces that will encourage interactions between the team members and the principal architects. The entire width of the studio space on the Northern side has 10 work stations and has been interpreted as a covered veranda thinning the line between the inside and outside.

The north side 20’x8’ sliding aluminum glazed window with an external protective layer of perforated sheet shutter panels and sliding/folding mechanism allows natural light, view of the streetscape, and ventilation into the house and the studio space.

The project was an interesting exercise to understand how the building interacts with the street. The precast concrete fins enclosing a small garden on the NE corner and defining the entrance foyer bring the building closer to the street. The concrete fins, the wire cut brick walls in rat-trap bond, and the perforated metal sheet sliding folding shutters add certain ruggedness to the building and at the same time bring lightness into the structure.

The simple strategy of a single material (perforated sheet shutters) helped in achieving a very minimal yet dynamic façade. The interior design of the office space and the residence is an extension of the architectural aesthetics of the building and at every possible juncture; we have tried to keep the materials in their natural form as much as possible. The furniture units are more like objects kept in the foreground of the building shell from inside.

In the office level, the two units on either side of the reception area demarcate the conference room in the SW corner and the studio space on the northern side. Both these units though physically separate the spaces, are visually porous and double as storages and bookshelves. The paneling to encase the pantry and printing area is done in pinewood over a ply base.

The space under the stairs going to the upper level has been utilized as the material library and server rack. The conference room has a deep unit with flat file drawers to store large drawing sheets and stationeries. The textures of the materials are always contradicting, yet tend to exhibit a certain sense of visual cohesion.

The sal wood posts accentuate the relatively bland and light grained finger jointed rubber wood planks. 4mm shadow gaps have been introduced between two layers of materials of the same or different kind adding a character to the surfaces. The upper floor which opens out to a terrace space has been left for future expansion.

Atypical to any design approach, the project displays a strong sense of desire to get away from the dogma of façade architecture by responding to our grass-root principles of keeping it simple, engaging, and blending material palette with a contemporary undertone. It is our attempt to get a slice of that borrowed landscape from the street and a slice of the sky for ourselves in the tight urban condition.