Tyra Banks, famous model and host of America's Next Top Model, among other things, has decided to sell her Beverly Hills Spanish-Colonial home of 11 years. Originally built in the 1920s, this home has Mediterranean feels, clean lines, and beige hues that gives the home a comfy and cozy feel. 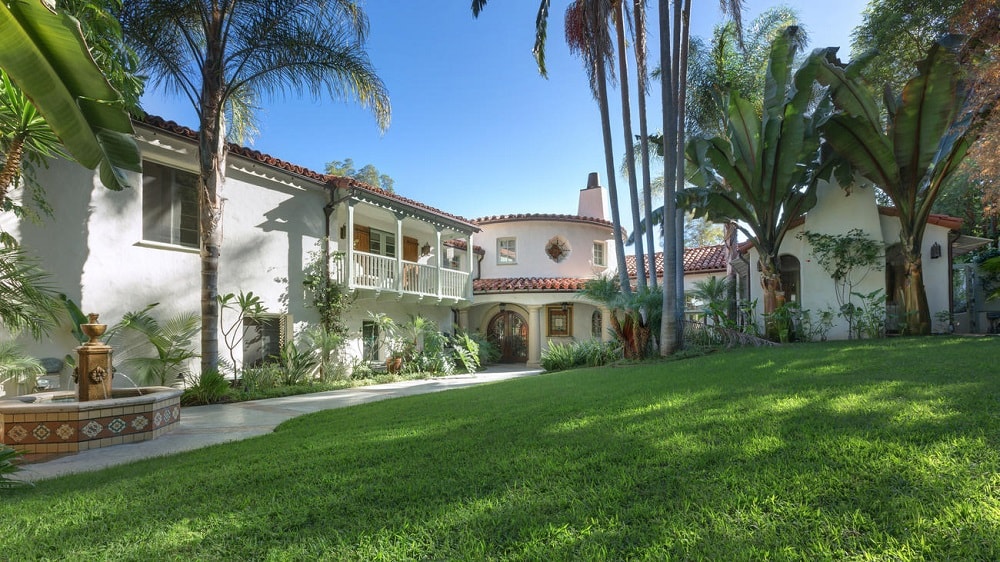 Tyra Banks, model, producer, host, and judge, has just put her Beverly Hills villa on the market for $7.75 million. After the debut of America’s Next Top Model, Banks purchased the Spanish Colonial 6,000 square foot villa for $3.85 million in 2004. The home was originally built in 1926 and has 4 bedrooms, 5 bathrooms, 2 powder rooms, home theater, library, sunroom, gym, chef’s kitchen, maids quarters, outdoor kitchen and dining, and a pool.

The home’s Spanish style isn’t just reflected on the exterior with its red tile roof and stuccoed walls. Even as you approach the home, the walkway has a small fountain and large rustic-style wooden door. The interior creates a warm atmosphere with wooden cathedral ceilings, chandeliers, dark hardwood flooring, beige walls, stone fireplaces, and windows that bring in natural lighting.

The living room has an arched opening that leads to the outdoor kitchen and sitting areas. The kitchen continues with the beige tones with beige cabinets, a large kitchen island with black granite countertop, and pendant lights. The master bedroom has a large walk-in closet with beige cabinetry and built-in shelves surrounding an island with a small chandelier overhead.

The entire home is filled with clean and crisp lines and colors that compliment each other. Beige hues are brightened by different fabrics in the living areas. The wood flooring and cathedral wood-beamed ceilings add to the Spanish style with wrought-iron accents of sconces, chandeliers, and cabinet hardware.

Although the home has very neutral colors, it still feels warm and cozy. I really enjoy how each room flows together to make a cohesive home in and out. With the large windows and archways opening to the outside, the living space is extended outward.

The outdoor area has a kitchen, dining room, BBQ, shower, firepit, covered patio, and a heated pool. The firepit is nestled in an alcove with curved seating around. The heated pool can be found alongside the backside of the house with some trees overhanging to provide some needed shade. The covered patio is a nice area for reading and relaxing, with a large stone fireplace that has a wall-mounted tv above it.

Banks began her modeling career at the age of 11 and soon became of the world’s top models in both Europe and the United States. She is also a successful film and television actress, appearing in The Fresh Prince of Bel-Air, Coyote Ugly, and Life-Size 2. She also was the host and Executive Producer of America’s Next Top Model from 2003 -2015.

Banks was the first African American to be on the cover of the Sports Illustrated bathing suit issue and to be a Victoria’s Secret Model. She is a jill of all trades, not only is she a host, model, and actress, but she’s also a best-selling author, singer, and business owner. The Spanish Colonial she has called home for 11 years sold for $6.4 million in 2016.