Live near an airport or major highway? You might want to consider soundproof windows. They come in many styles, can be bought easily, and they add to the quietness of your home. 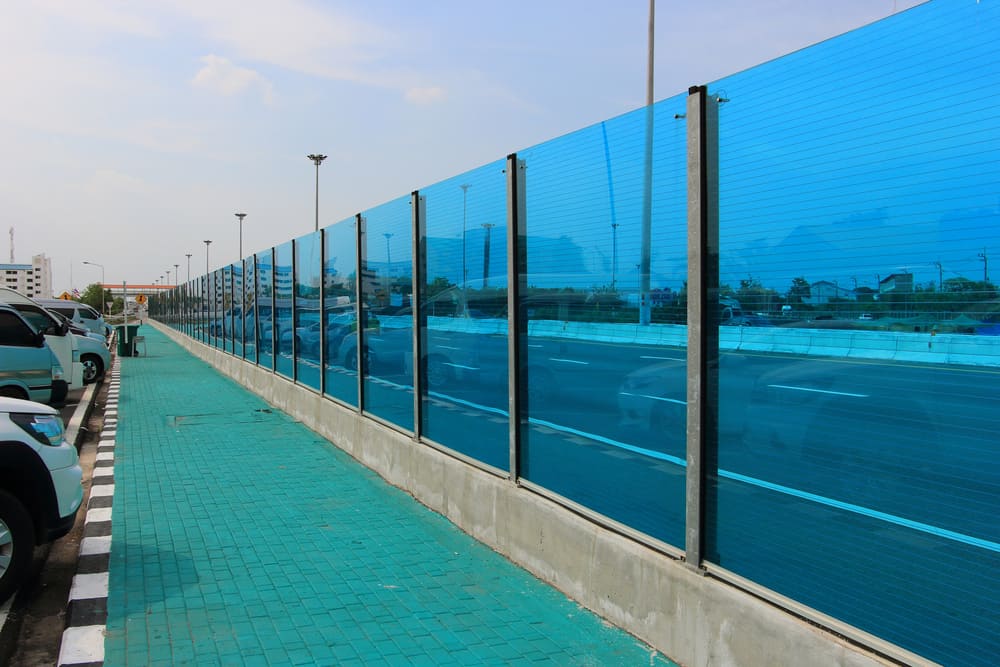 Living beside a major highway or close to an airport has consequences. You lie awake at night trying to separate the motorcycles from the car exhausts. Sometimes it’s a big rig making all that noise. You can also identify an afterburner. You need soundproof windows.

It works by building a barrier between you and the sound by trapping the kinetic energy of the waves of sound. It can block up to 95 percent of the sound except for some frequencies.

Important note: Keep in mind that soundproof glass doesn’t mean absolute silence. It means noise reduction of up to 95 percent. You won’t hear birds cheeping or sirens wailing, but you might hear sounds in the lower band of frequencies (like the neighbor’s lawnmower at eight am on Sunday.) 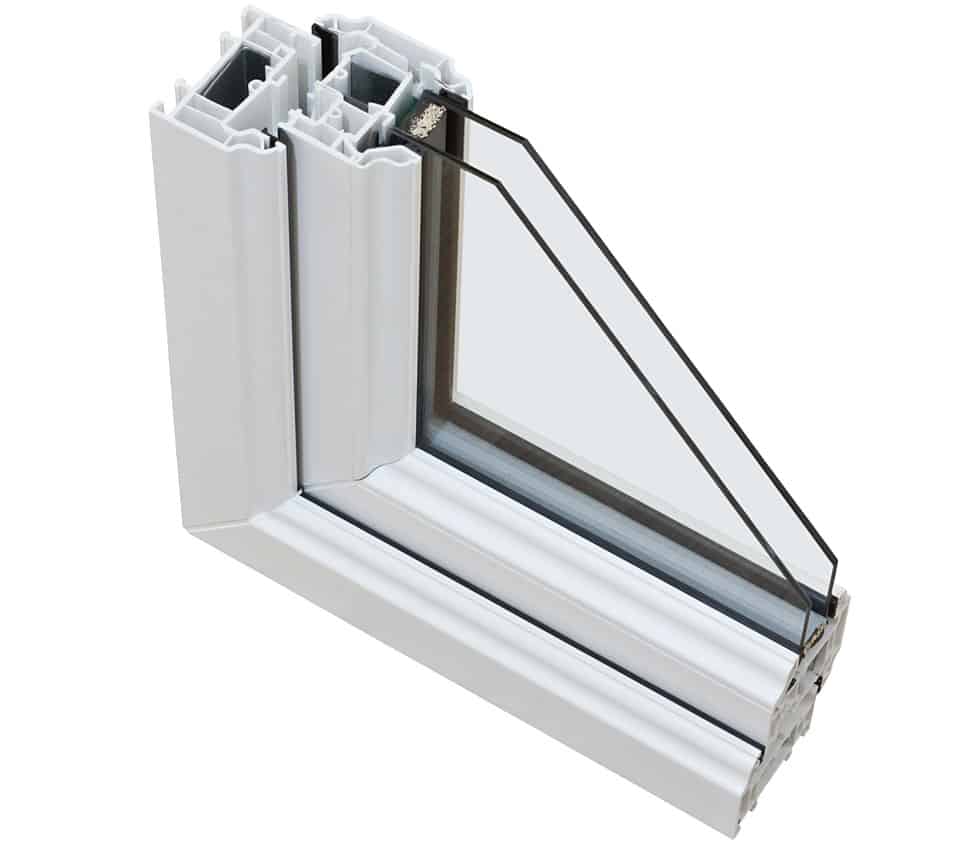 When sound hits a window, the glass vibrates which causes noise in the house. One way to battle this is by adding panes to the window. There are double pane windows and triple glazed windows (which just means another pane.) Between the panes is either air or argon, a heavy, slow inert gas. The outside pane absorbs the noise. The air or gas stops it cold before it reaches the inside pane.

Double and triple pane glass has many pros and cons:

The only con here is that the more panes of glass added to the window, the more expensive it gets. Another is that you can’t buy just one window; to gain the maximum effect of soundproofing, you’d have to replace every window in the house.

Double and triple-pane windows are available in a number of styles:

A Brief History Of Double And Triple Pane Glass 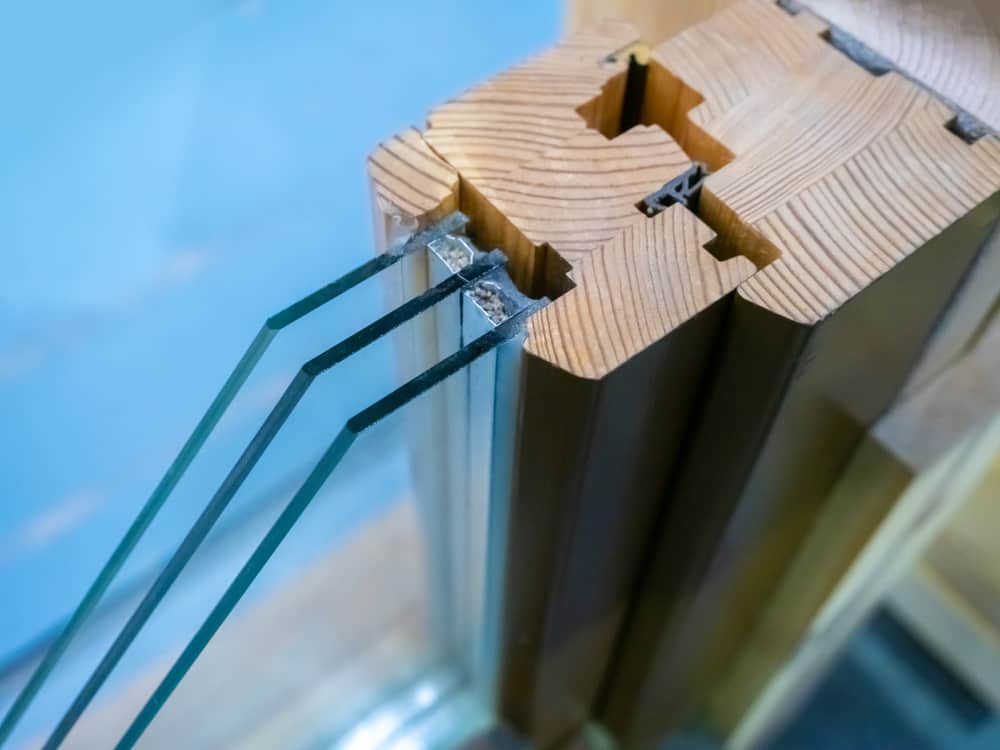 Holes cut in the roof and walls of dwellings for light and ventilation go back to the 13th century BCE. Adding lattice in later years served to prevent debris from entering the house yet still allowed a view outside. By the 1st century BCE, the Romans began to add glass, imperfectly made though it was, to their windows for the same reasons.

The snag to that was that the glass obscured its own self and was difficult to see through. The glass-making method evolved, though, until in the 19th century floating glass made its appearance. This involved floating the blown glass over a sheet of metal at melting temperatures. The sheet of glass then hardens into whatever shape was intended.

This method is still in use today for the most part. In 1913, the Andersen Lumber Company introduced wooden window frames. They next added the hardware and the sash. In 1952, they offered the Welded Insulated Glass window that we know as the double-pane window.

Double and triple-pane windows won’t work, however, without something between them to stop the outside from getting inside. You need something heavier than air in order to repel it. That’s where heavier than air, inert gas enters the picture.

The object of the exercise is to slow down the time it takes for the outside to get inside the house. Argon is typically used in double pane windows while krypton is used in triple pane windows. Either way, the outside is staying there.

Where To Buy It

Double and triple pane soundproof windows can be bought at big box stores like Home Depot or Lowe’s. Glass companies like Pella, and door companies as well as Amazon sell double and triple-pane windows. Also, check recycle centers. They sometimes sell windows to those who will refurbish them and resell them.

Adding plastic laminate to the glass provides two things: the first is stopping noise at the outer glass. The second is that it makes the glass firm and durable. Two materials are used in laminate glass-polyvinyl butyral (PVB) and spacers of rubber.

PVB is a type of resin that makes the plastic binding and flexible. It blocks sound at the 1,000 to 3,000 Mhz range. This is the range most sensitive to our ears. Noise is reduced by 50 percent. 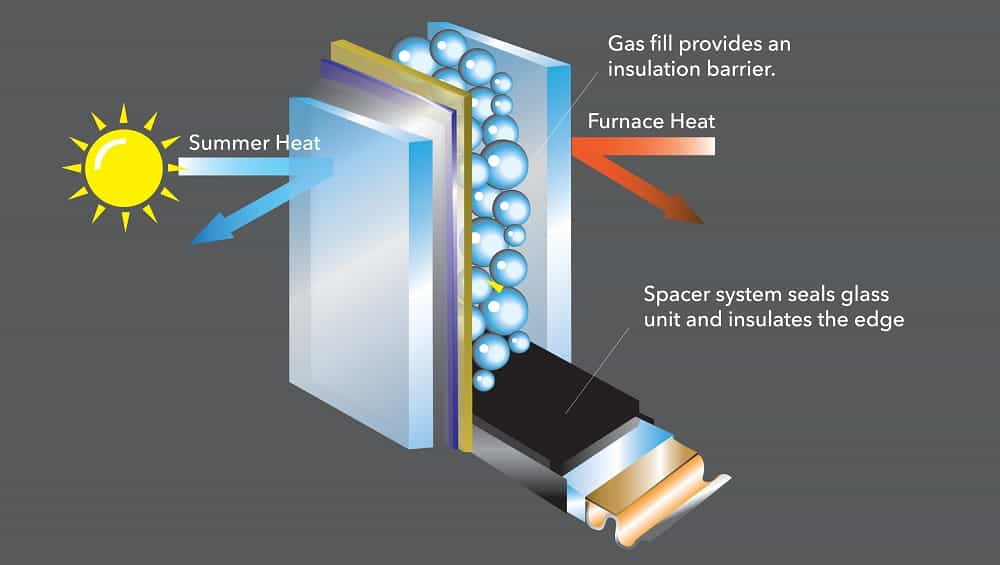 Rubber spacers form a barrier between the glass and sill. This decreases noise from the glass and frame. Spacers are placed between panes of glass to help hold the air or gas in place. They’re bonded usually at the bottom of the pane.

One of the phenomenons of spacers in glass windows is the Warm Edge Technology. The thermal interchange between glass, space, and the window frame means that the energy lost from inside to outside the window makes the spacer warmer. The warmer the spacer the less energy and heat loss.

Laminated glass isn’t shatterproof, but it doesn’t spew glass all over the place when it breaks. Burglars can’t cut through it. Impacts make the glass ripple instead of breaking. The laminate blocks the harsh UV rays of the sun. You are protected from acts of nature such as tornadoes, hurricanes, and bad storms.

Improper installation is the only con with this one. Not fitting the window to the frame properly just begs for trouble. Not fixing the panes properly in the frame with spacers might allow seepage of the air or gas between the panes. Just make very sure a professional install your laminate windows.

Homeowners with gorgeous views might want whole walls of glass through which to view Nature’s bounty. Homeowners whose windows face South and West might want laminate windows for UV protection. Those who simply wish for good quality windows with all the protections they offer might choose laminate.

Also known as tempered glass or safety glass, the laminate glass comes in a wide variety of window styles.

No one who has ever tried to watch TV or work on the computer with the sun shining in the window has appreciated glare. Laminate glass deals with this effectively. However, if homeowners or business owners dealing with glare wishes, the laminate can be slightly tinted with a low-E tint to help.

TV home renovators are using frosted glass, curved glass, and patterned or tinted glass to great effect. It’s aesthetically pleasing and quite stylish. The design is located inside the glass, so it’s safe from sticky little fingers, paws, and stains.

One very important quality of laminate glass is that it’s clear. Most folks picturing a laminate window would see a sheet of plastic. Au contraire. The laminate is clear. Distortion doesn’t exist, and images are sharply represented.

A Brief History Of Laminated Glass 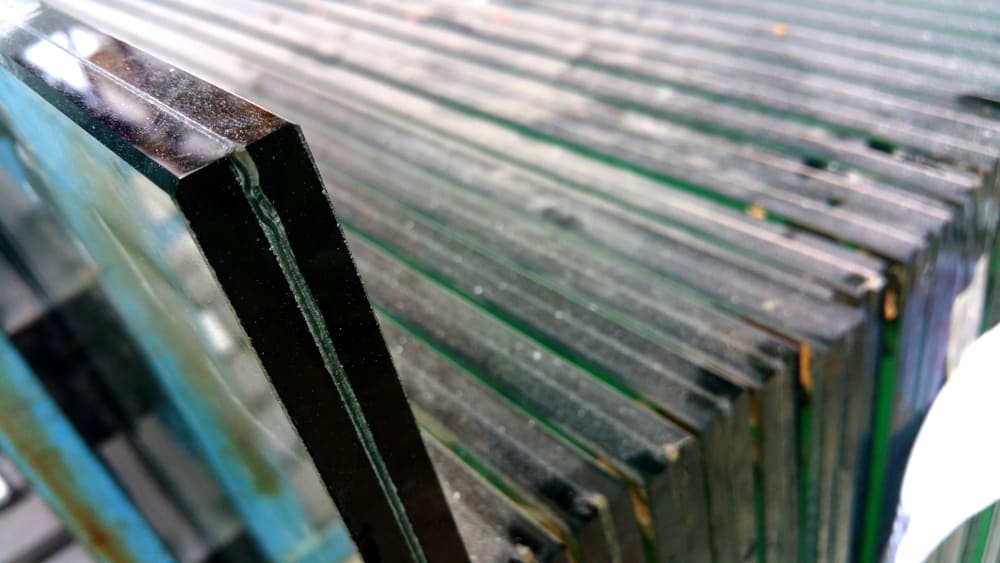 Safety glass or laminate glass goes back to a French theater costume and set designer who dabbled in chemistry. He was appalled by the auto accidents of the early 1900s when people were seriously damaged by glass windshields. In 1909, he dropped a glass test tube inside of which was a liquid that had evaporated.

The liquid had coated the test tube with a substance that didn’t shatter when dropped. Edouard Benedictus then sandwiched his laminate between two sheets of glass. When it broke, it spiderwebbed instead of causing damage to people. Today, every car, bus, and truck in America features laminate glass windshields.

Where To Buy It

Laminate glass can be purchased at any big box store like Home Depot and Lowes. Glass companies sell it. Laminate can be found in automotive and marine stores as well.

Aside from the neighbor’s teenager’s rock band practicing in the garage every Saturday and/or the noise from traffic, soundproof windows offer energy savings. They prevent the air conditioning from getting outside and the heat of the day from getting inside. They decrease or eliminate altogether condensation that causes mold and mildew.

Soundproof windows have a bunch of real estate advantages. They comply with present building codes. They increase the value of a house. They sharply curtail a burglar’s efforts to gain entry, making everyone feel safe.

Which Glass Is Better For Noise Reduction And Soundproofing?

You must understand two things about acoustics: the perception of sound on the human ear and the physics of sound. Sound is measured by sound intensity, sound pressure, and sound pressure level. The human ear perceives sound in a measurement called decibels. At 140 decibels, the human feels pain.

See also  Batt vs. Blown-In Insulation in Walls: What Should You Use?

The human ear hears a mixture of frequencies. We don’t always identify each one of them, so some slide right past us. What we can hear can be divided by eight or 24 or the bands in the audible frequency range. So a car’s bass thumping past your house is pounding at 20 Hz. This is how you can hear only a two-decibel increase of noise when the bass hits your laminate window.

How Do You Reduce Noise In Existing Windows?

You have a choice here. You can replace the windows altogether, or you can use a window insert. A window insert is a fully functional glass window that fits snugly inside the existing frame. The existing window isn’t changed; you simply have a double glass window now. They decrease noise by around 70 percent when used with an existing window and around 50 percent when used with double-hung windows.

Because a window is energy-efficient, doesn’t mean it’s soundproof. If you have soundproof windows, making them energy efficient is a simple matter of using low-E coating as well as caulking the windows well.

Can Soundproof Windows Be Used For Home Recording Studios?

The recording is a delicate process. You only want the sound of your instruments and your voice on the tape. You certainly don’t want to do the playback and hear the air conditioner, a lawnmower, the cat meowing, or footsteps. In order to cancel out these sounds, you’ll need to soundproof your studio.

See also  14 of the Best Ways to Soundproof Your Bed

Soundproof Central: Soundproof Glass – What Is It And How Does It Work?

Du Pont: Why Use Laminated Glass?

US Window-Door: Double-Pane and Triple-Pane Windows: Why Numbers Matter

Glass on Web: Acoustic Properties of Glass: Not so Simple