I have always loved visiting my family in the South. One of the reasons is that I can stop at Cracker Barrel for a home-cooked meal. While I’m waiting, I can lazily sway in one of the most amazing rocking chairs ever.

The traditional chair is what you find at Cracker Barrel. It’s just your basic arched rocker panel beneath the legs. The chair itself is made of slats with a high back and arms. 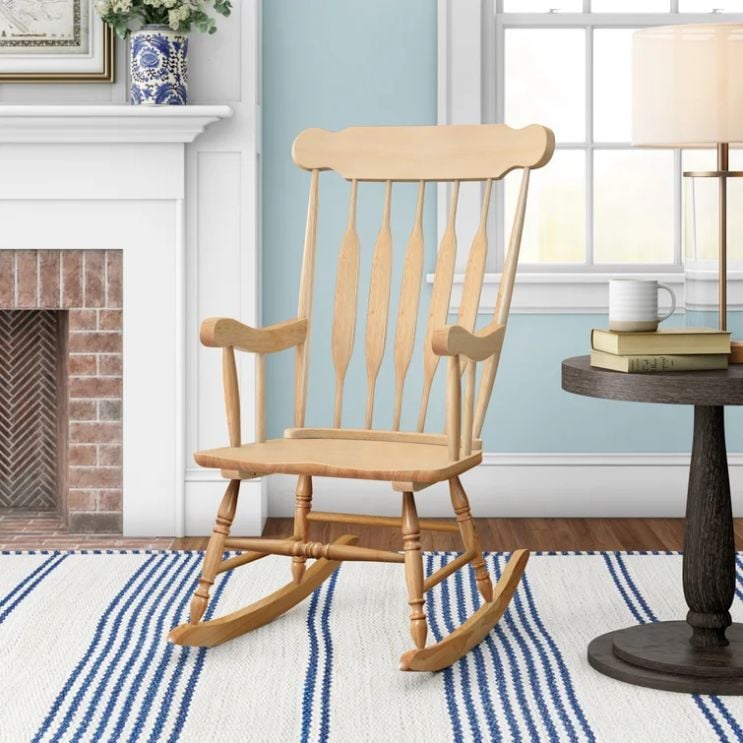 Pictured above is the glider rocker. It’s built onto a base with braces allowing the back and forth motion. Many come with a hassock that also moves back and forth with the seated person.

The chair won’t tip backward, which cheats the seated person of a rocking chair’s ergonomic properties. Some people prefer stability, though, so a glider is probably the chair for them.

The third category is the platform rocker. It, too, rests on a base, but sometimes the arch is inverted, much like a glider rocker. Other times there isn’t an arch at all.

Springs provide the rocking motion. Many platform chairs are built like reclining easy chairs, some with pop-out footrests. You can even get them in wing-back style; I just adored my royal blue one. 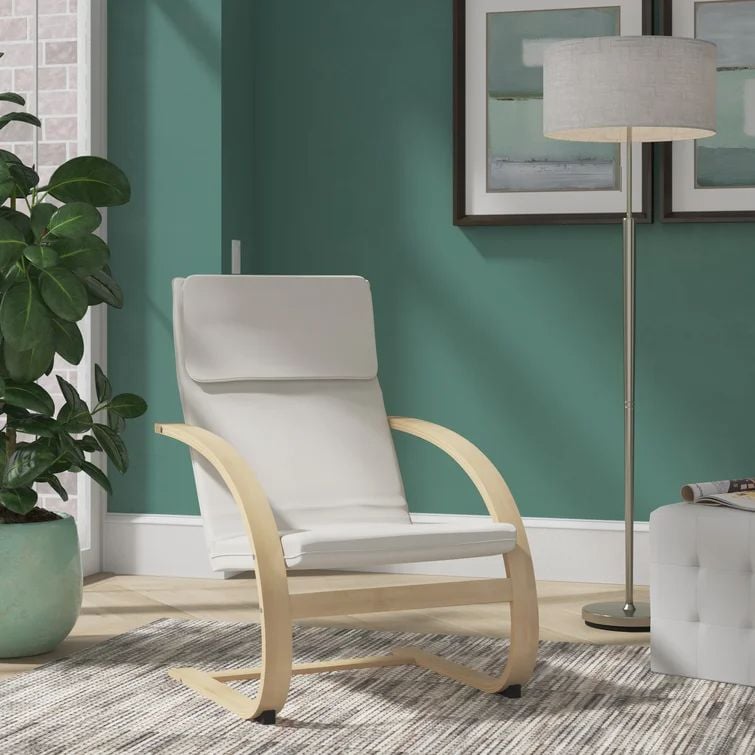 Now we’ll move on to the myriad types of rocking chairs. You might call them styles instead of types, and you’d be perfectly right. Either way, check these out. 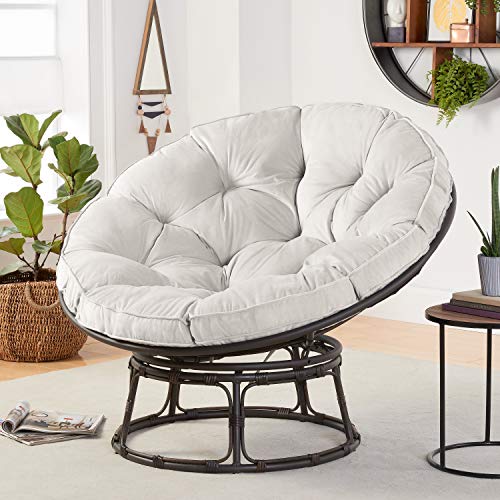 Do you remember the movie Patriot, in which Mel Gibson finally gave up on building a rocking chair? He couldn’t quite get it right, so he trashed each one after it failed him. The chair was actually produced in Boston. As pioneers settled in the South and West, they took the chair with them. These are sometimes called traditional rocking chairs. 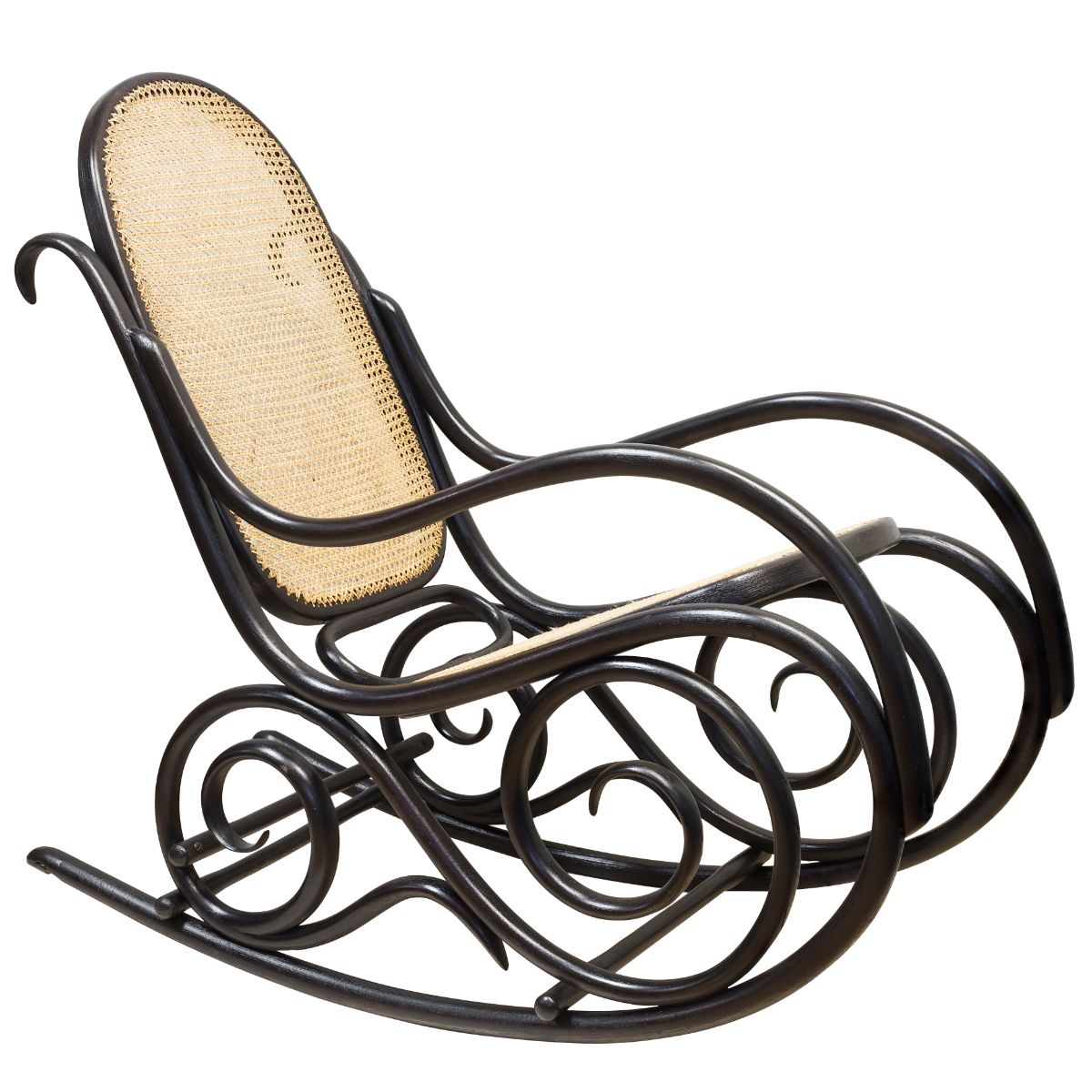 These chairs rest on a round base atop which springs attach to the seat of the chair. When you sit in the chair, the springs move you. Spring chairs come in all kinds of shapes, sizes, and colors. I chose a saucer chair for you to consider because they’re fun! 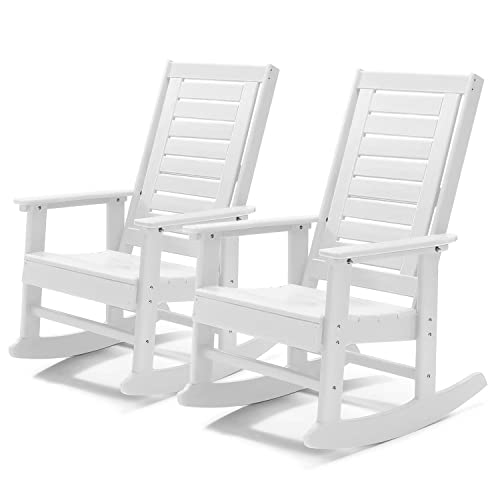 We’ve all seen those masterpieces of design and execution in rocking chairs. The swirls are reminiscent of the days when furniture was painstakingly carved by hand. The wood has to be steamed in order to make it pliable enough to shape into swirls. 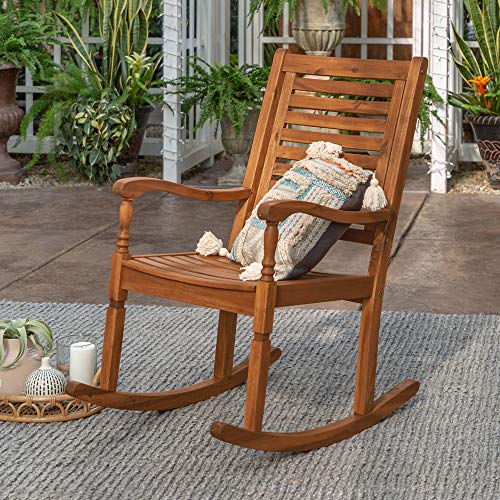 Since handmade furniture has largely disappeared from the scene, you won’t find bentwood chairs in modern furniture stores. However, if you troll enough antique shops, you could find one. 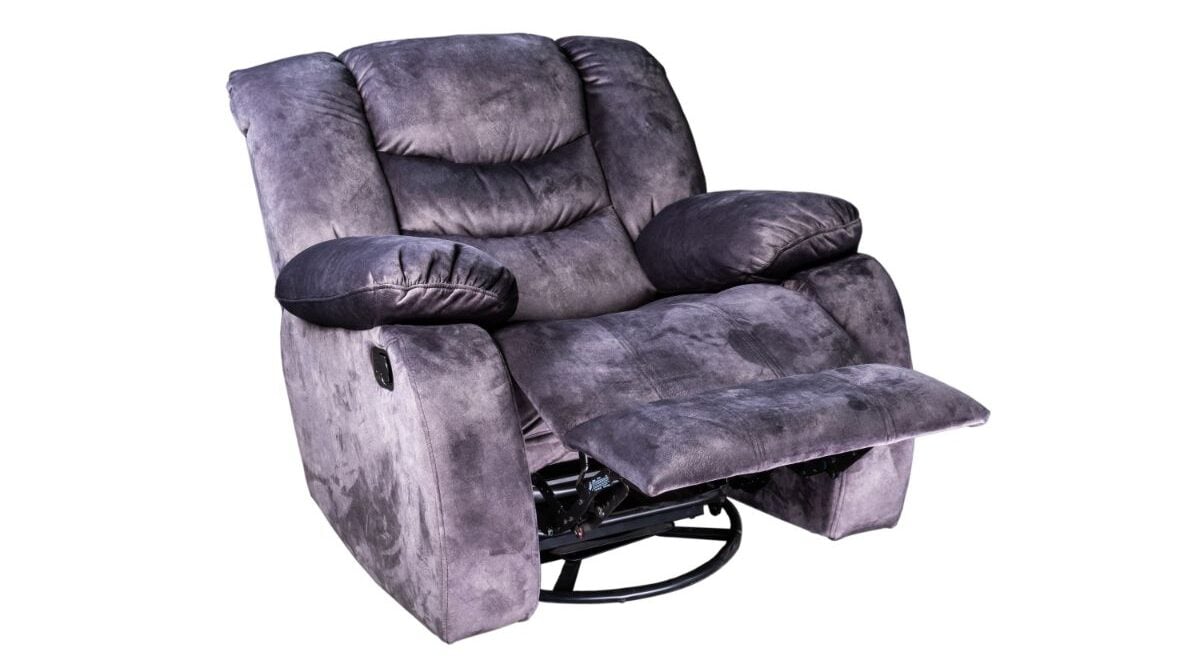 Traditional chairs have slats going top to bottom or side to side. The seat is either rattan or wood. The usual ladderback chair resembles the Boston rocking chair and has a bucolic appearance. They’re the easiest to make, so you’ll see more of these around. 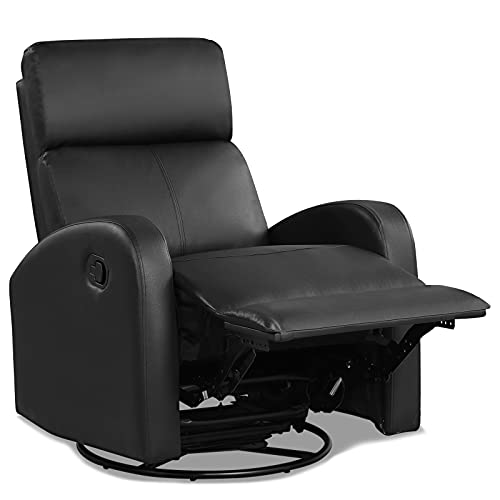 We Americans want comfort, and we want it now. It was a bonanza when furniture makers found out that people wanted cushions for their tushies. From dining room chairs to living room chairs to rocking chairs, a soft place to sit our fannies down is all around us. From reclining easy chairs to cushions on traditional rockers, Americans can now rock on! 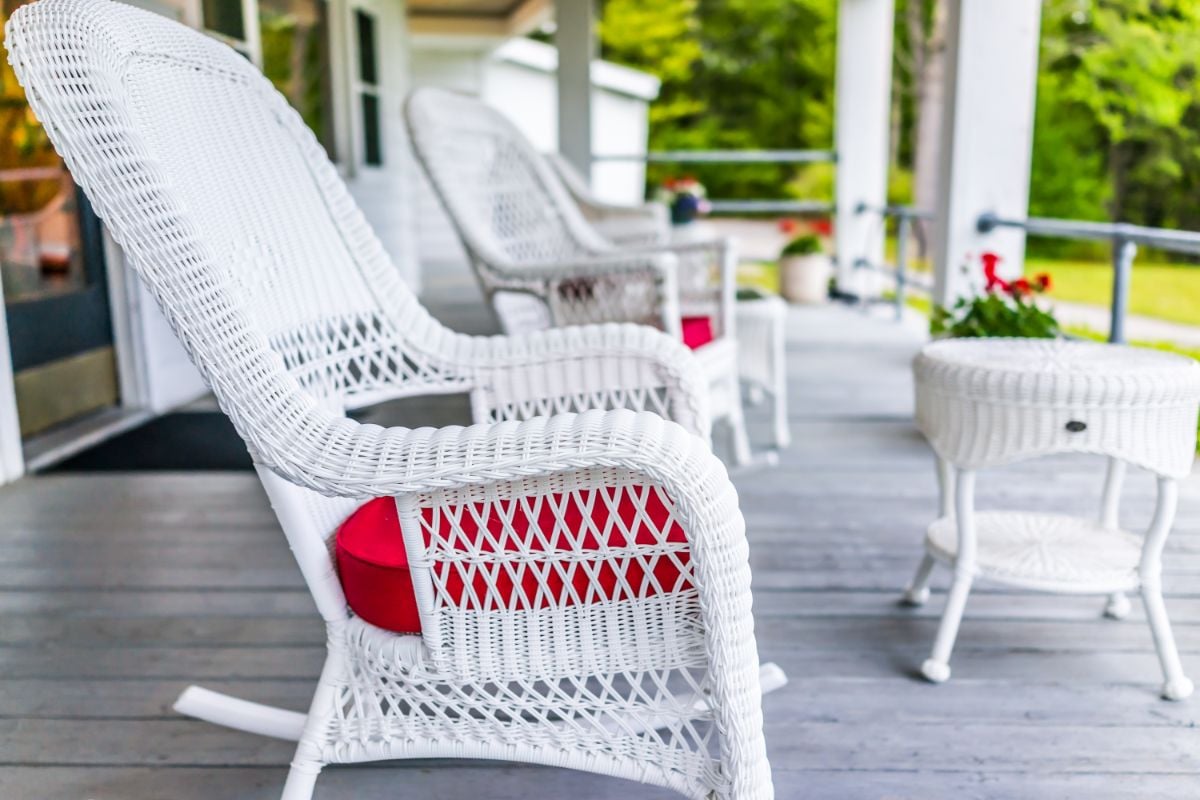 There’s nothing like relaxing after a hard day in the trenches. It’s even better when you can kick back, put your feet up, and rock yourself while dinner is being finished. Then you can catch your favorite shows, all the while enjoying the gentle rocking of your recliner chair. Just be careful you don’t rock yourself to sleep. 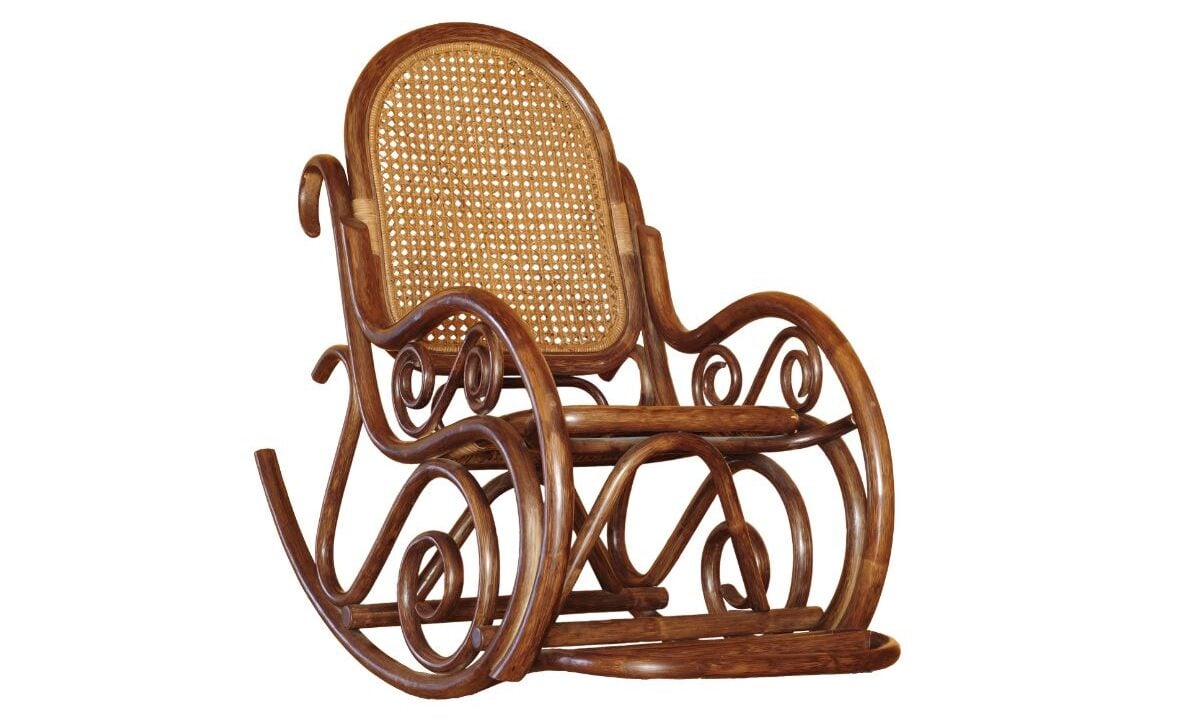 Generally, you’ll find wicker and rattan woven into the seating and backing for rocking chairs. You usually find wicker rockers and other furnishings on porches, patios, and decks, but sometimes a country décor will feature white wicker furniture.

Rattan is more reminiscent of the tropics, with palm trees waving over rattan rocking chairs on the deck of a five-star hotel as you enjoy a pink drink with a little umbrella in it. It’s generally tan and woven a bit more closely than wicker.

Today’s indoor and outdoor furnishings are trending more towards upholstery, but you’ll still find wicker and rattan furnishings, including rocking chairs. Online is the best place to find these things, but summer is also a great time to locate woven rocking chairs. 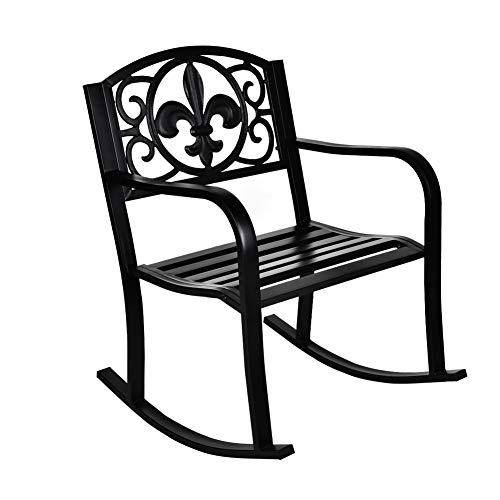 While I wouldn’t sip tea beneath those shade trees, rocking while enjoying the latest family news sounds good to me. How about you?

Although most ornamental metal furniture is made of wrought iron, other less expensive metals made into furniture and rocking chairs, in particular, include bronze, aluminum, and steel. If your metal rocking chair is going outdoors, I very strongly suggest you paint it with rust-resistant paint. 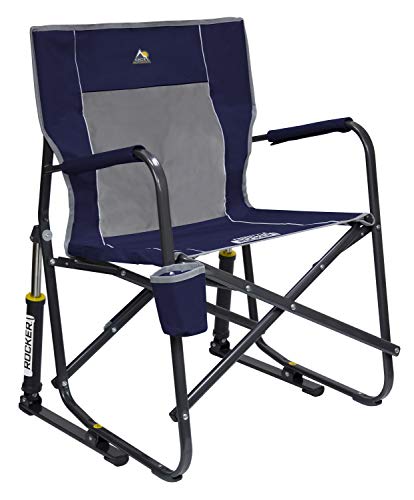 Sitting around the fire pit, watching the kids play in the pool, or snoozing, oops, I mean fishing on a camping trip is no fun without just the coolest rocking chair ever. It collapses, so you can pack it in with the tent, it has a beverage holder, and some even come with a canopy to fight sunburn.

Camping chairs have to be made from nylon or a similar substance due to the wear and tear on a camping trip (you know how kids are – they have to try them out before Dad can.) So your camping rocker will come in different colors if not different materials. 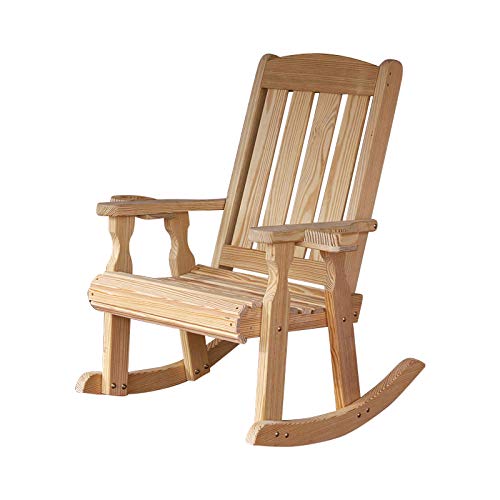 Unless it’s metal or plastic, furniture is made of wood. Two types of wood are used to make rocking chairs: softwood and hardwood.

Pictured above is an Amish rocking chair made of the softwood pine. Other types of softwood include acacia, cedar, fir, redwood, spruce, juniper, and yew.

Softwood furniture doesn’t last long enough to become an heirloom. Those considering buying a rocking chair made of softwood should also consider that they’ll be refinishing the chair for many years to come if they want it to last. 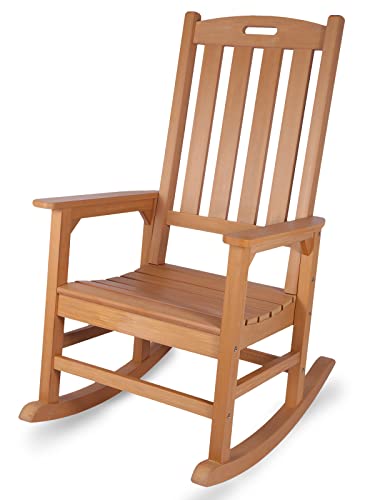 More furniture is made of hardwood due to its durability and beauty. Such woods are teak, of which the pictured rocking chair is made, oak, maple, mahogany, and beech.

More durable and less likely to become scratched or gouged, hardwood furniture is what you find in true antique stores. It’s generally made of oak or mahogany.

They’re sturdy and won’t need refinishing for a while. Okay, rockers made of hardwood are more expensive, but they’re beautiful, beautifully made, and will outlast those they’re seating.

If your head is swirling from all these types and categories of rocking chairs, I don’t blame you. Grab a coffee, because we have two more sections to get through: modern and antique rocking chairs. 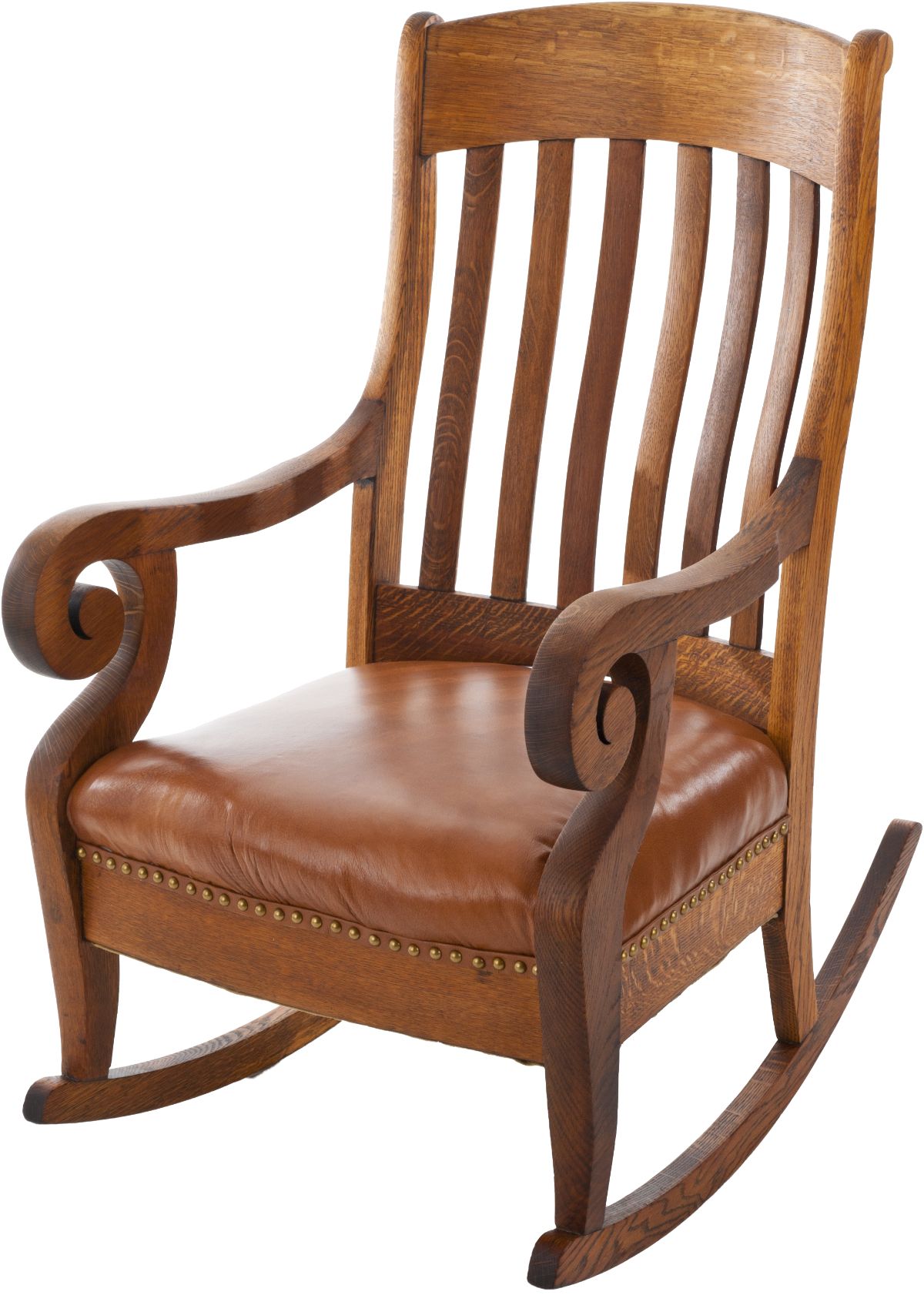 “Antique” stores pepper cityscapes all across the country. These are usually second-hand stores that charge extra because the store is called an “antique” store. You should know that real, true antiques don’t litter the landscape.

Real antique stores include refinishers as well as a verification process. If you know how to authenticate an antique, then you’ll find the right spot.

You may or may not find antique rocking chairs, but when you do, you’ll recognize them by the wood of which they’re made, the style of the furniture maker, in addition to his “mark.” They’re going to be expensive, too.

Grab another coffee, because “modern” covers a lot of territory. The materials from which modern chairs are made generally include synthetic woods, plastics, and coated and/or polished metals (think office chairs and desks.) Then you have the method of presentation, so I’ll understand if your head starts spinning again. 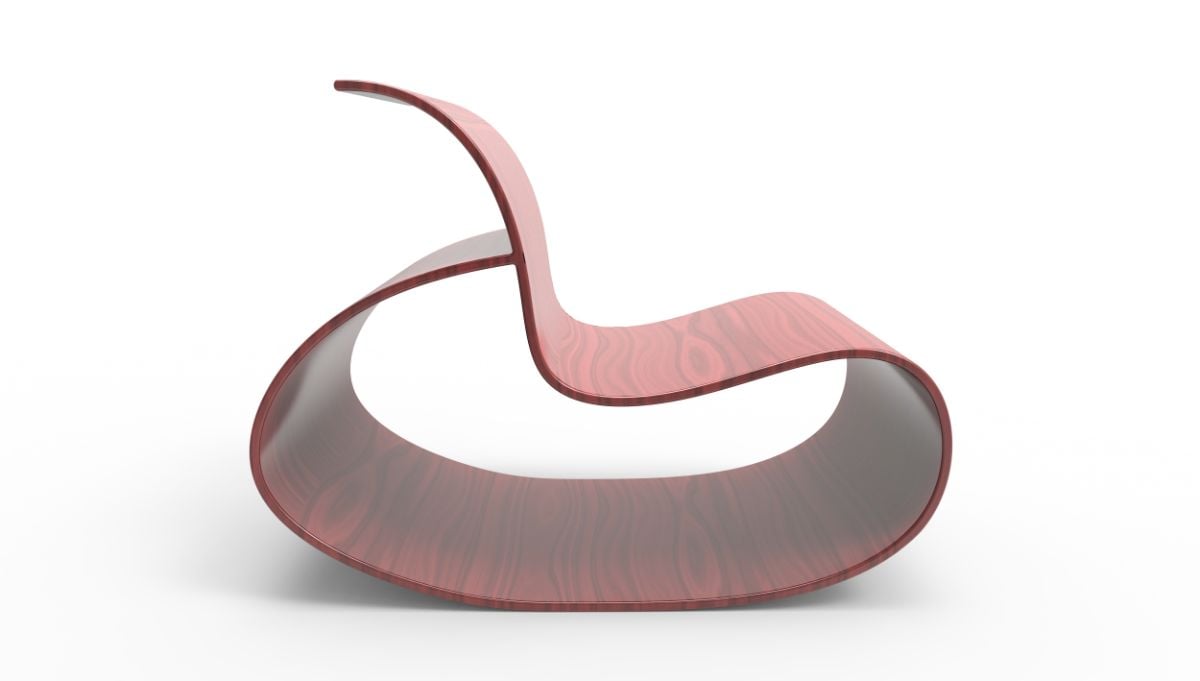 We’ve all seen park benches, bus stop benches, and benches in other locales in rolling shapes. We’re afraid to sit on them because we don’t know if the thing will roll right over.

It’s interesting to look at, but not inviting as seating. They’re generally made of coated/polished metals or pressure-treated wood.

Most of life is plastic nowadays, including the cars we drive. Surgical tools and methods (the cameras accompanying laser surgery) incorporate plastics. The doors of our houses are plastic, as is some of the flooring.

We eat off plastic, drink out of it, and sometimes even shower in it. Why not sway on a plastic rocking chair?

You have plastic school chairs, picnic table plastic chairs, pool chairs, stackable meeting room chairs, folding plastic chairs, and plastic rocking chairs. I’ll stop listing them now, but these are good for keeping the kids entertained while you’re on to more important things, right? It’s a snap to clean them, too. 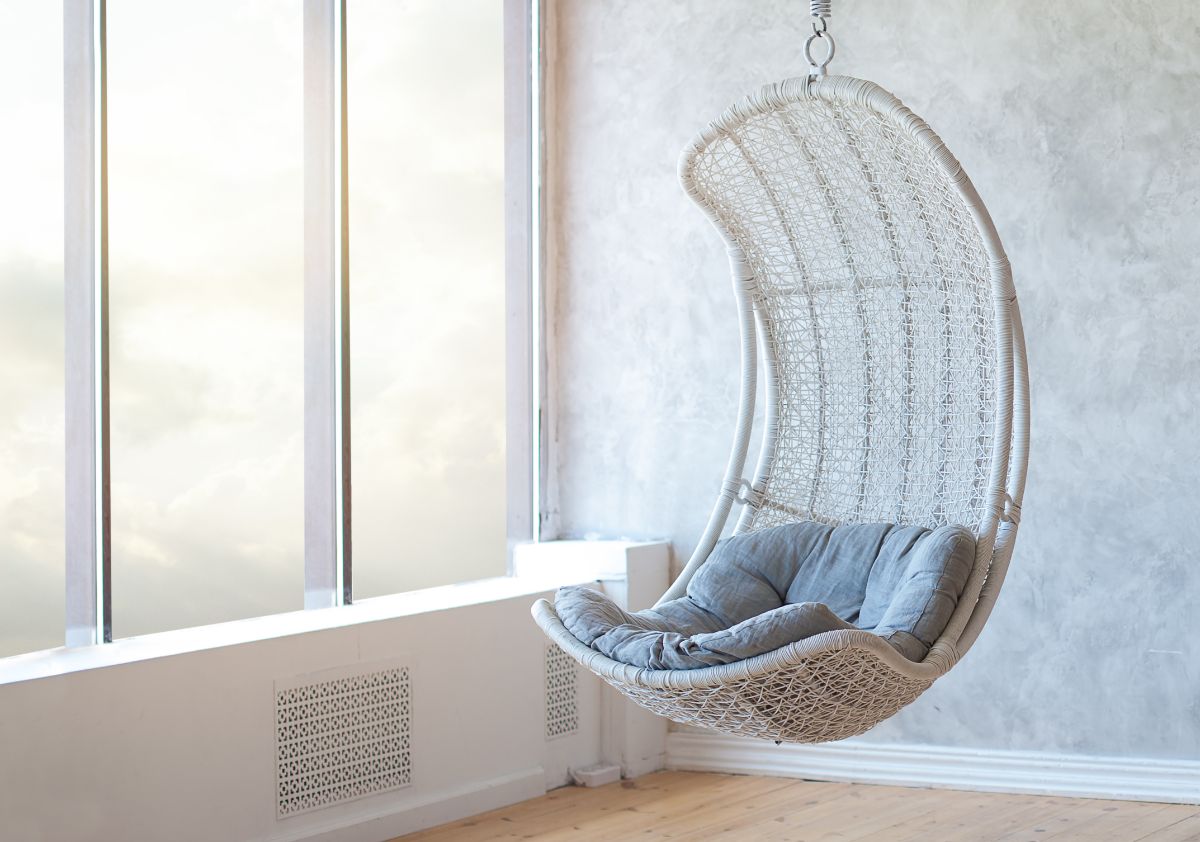 Some call it a hammock, some call it a godsend. They don’t make furniture marks on the carpet, scratch a wood floor, or block A/C vents. They will, however, cause a ruckus among the family because everyone wants to sit on a hanging rocking chair.

More and more homeowners are devising outdoor rooms for a variety of reasons. The furnishings have increasingly become more versatile, of better quality, and inclusive of innovative things. Like a garden rocking chair. 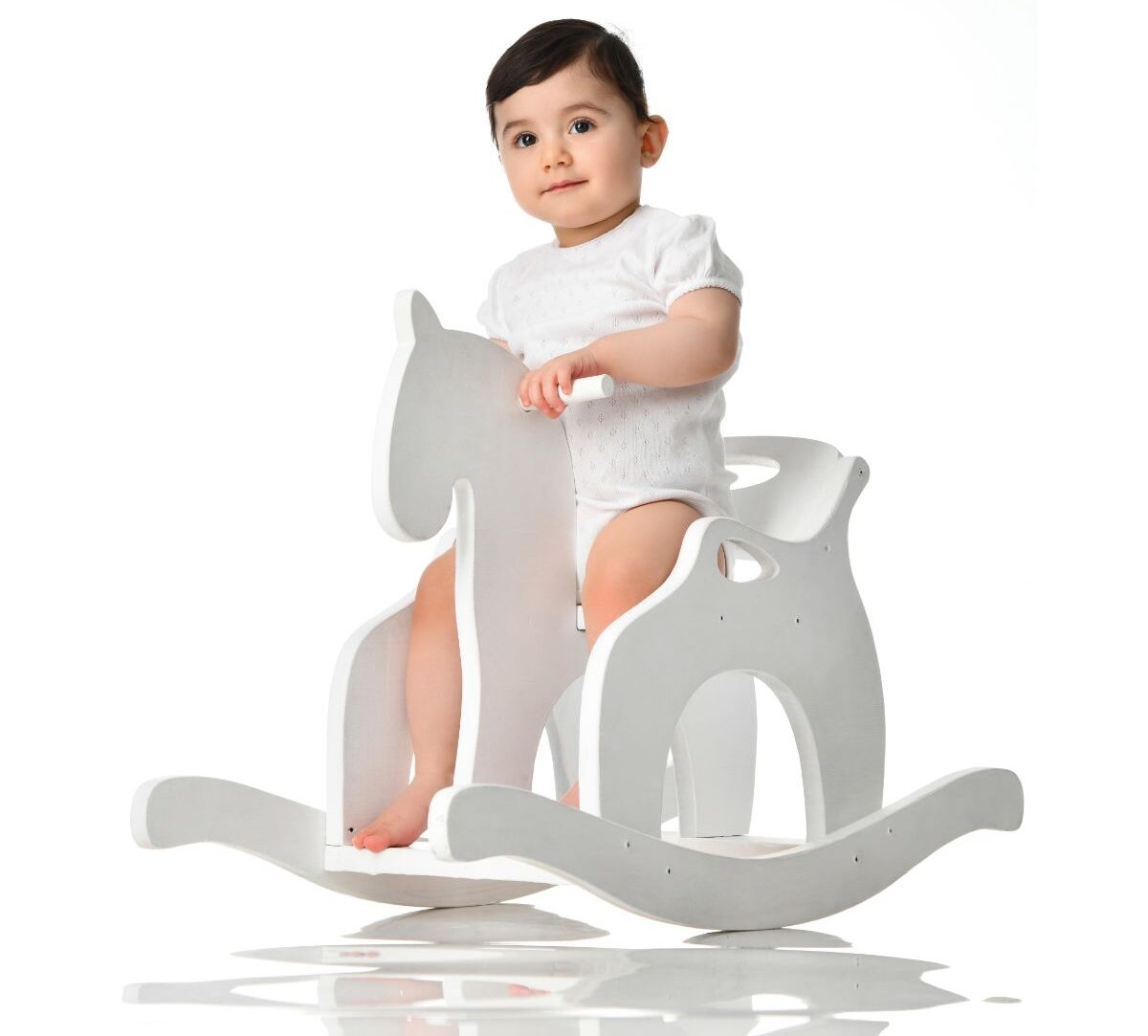 Another area in which designers and manufacturers are becoming innovative and daring is the area involving our babies. For example, my babies had rocking horses, but they didn’t have their own swaying chair shaped like a rocking horse. As with small children’s chairs in Kindergarten and the lower grades, rocking chairs for toddlers are a thing. Now they can rock while they read or play learning games on your tablet.

Pros and Cons of Rocking Chairs and Gliders

Both rockers and gliders require a bit of pushing to get the ball rolling, so to speak. Those with back trouble might want to look into ergonomic chairs that sit still.

Do Rocking Chairs Have a History?

“And the cradle will rock (thanks, Van Halen”) has been an idea for calming babies since ancient times. Cradles and rudimentary rocking horses have kept babies entertained for several thousand years. The story changes when it comes to rocking chairs in modern times.

Pictures of ladies knitting, rolling bandages, or otherwise creating while rocking in chairs are a popular idea from as far back as the 1700s. When the babies didn’t need to be rocked anymore, the chairs were moved into the parlor and used for other purposes.

Also popular are pictures of men sitting outside the general store on rocking chairs while gossiping and smoking pipes. The general store was the social medium of that time for both men and women, although women socialized over the latest magazine fashions indoors.

Modern times saw the rocking chair moved to the front porches of homes. The porch faced the street. When couples or families went for a walk, everyone rocking on the porch would wave and pass the time with pleasantries. Children would call out to their friends.

A one-size-fits-all chair, rockers have been pictured with Presidents seated in them, military geniuses, celebrities, and pretty much everybody.

In 1725, ice skates were attached to a Windsor chair to make a rocker. Inspired Americans proceeded to make their own version of the Windsor rocker.

By 1787, the “rocking chair” had made it into the Oxford Dictionary. In 1820, people saw the first Shaker rocker. By 1825, Boston rockers were being made.

In rapid succession for the next 140 years, the wicker rocker, platform rockers, bentwood, upholstered, rattan, and the Eames plastic rocking chair were introduced to a public hungry for rockers. By the way, Benjamin Franklin did not invent the rocking chair. He modified his with a palm-leaf fan.