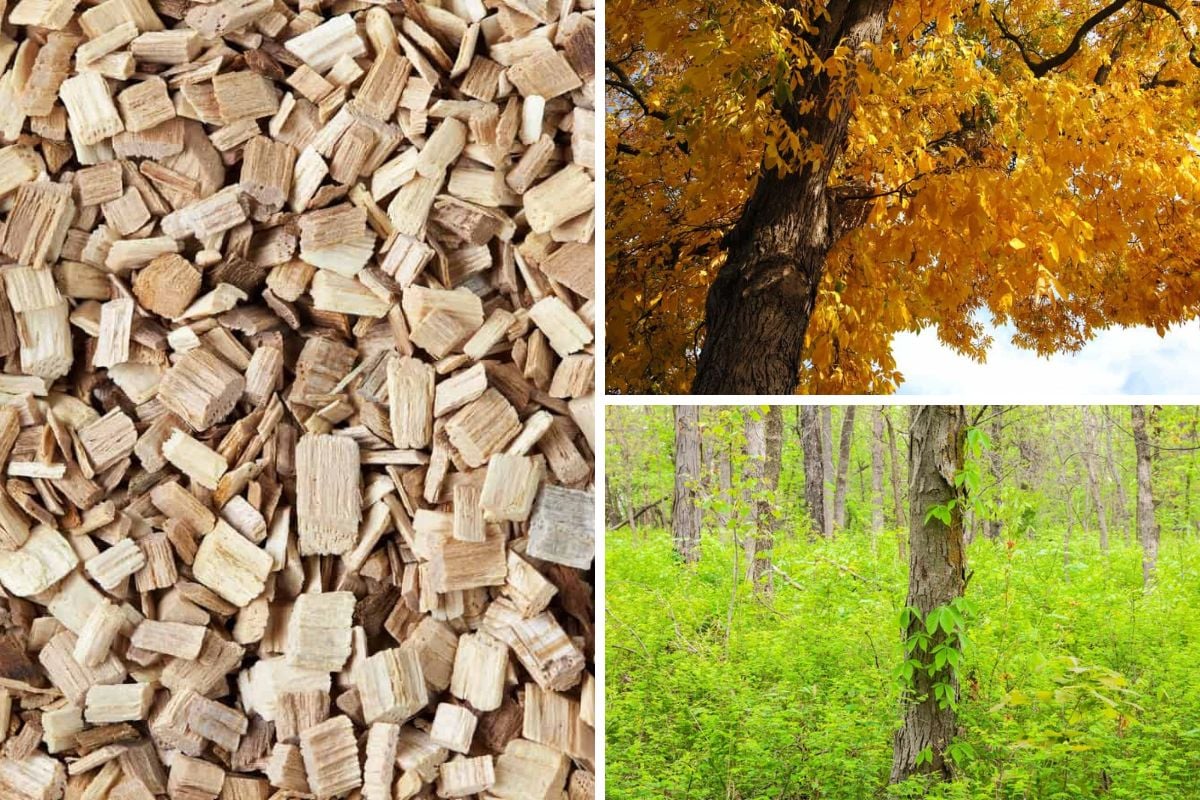 Hickory wood is a popular wood type in the United States. It is the hardwood that is most commonly used in BBQ. It is called the ‘King of BBQ wood’. It produces a heavy but sweet smelling smoke which makes it ideal for cooking beef, pork, poultry, and game meats like lamb.

Being such a commonly used wood type, one should have some knowledge regarding it. Let’s look at the hickory wood in detail below.

Hickory trees belong to the genus Carya. The word Carya is an ancient Greek term which means nut. There are about 17 to 19 known species of Hickory. An overwhelming number of species of hickories are found in North America.

About 11 to 12 of all hickory species are found in North America. 5 to 6 species are native to China, Indo-China, and India. 2 to 4 species are from Canada.

Every species of hickory produces a different nut, but not all of these nuts are edible. Hickory trees are planted widely for shade, hardwood, and are a habitat to small animals and birds. 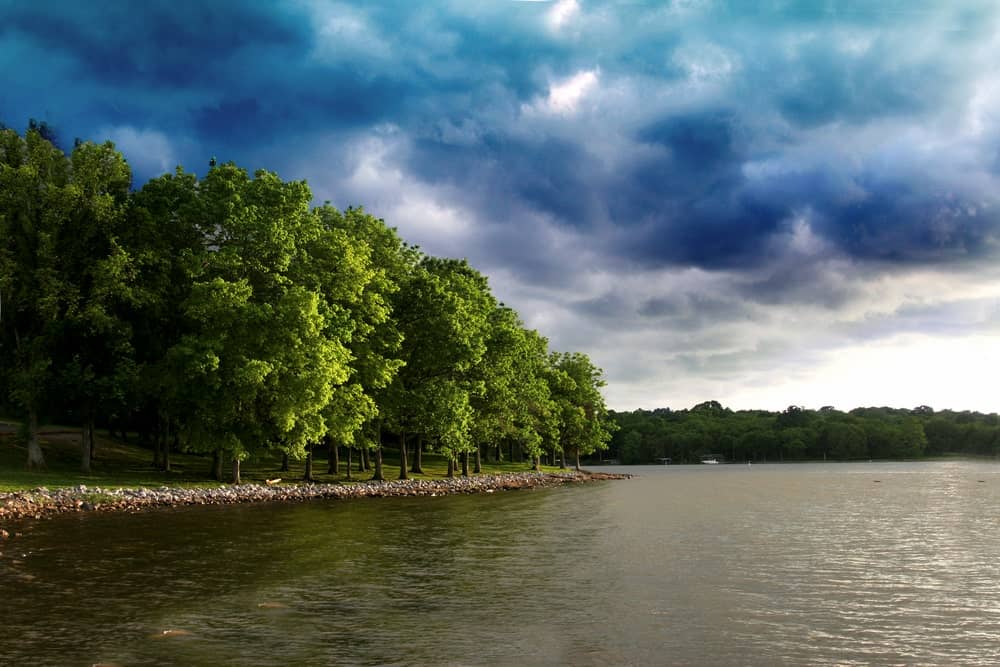 Hickories are deciduous trees, having large nuts and pinnately compound leaves. They can grow as tall as 50 to 100 feet and can spread as wide as 40 feet. These trees can live for many years.

Hickory flowers are small in size. They are yellow-green colored catkins that bloom in spring. The fruit of the hickory tree is an oval nut or globose; it’s about 2 to 5 cm long and 1.5 to 3 cm in diameter. The nut splits open when mature.

Hickory trees fall in a hardiness zone of 4 to 8. They can grow in most types of soils but they grow best in moist soil, which is not soggy and is well-drained. They prefer sunny areas to grow.

The earliest hickories have been identified from Cretaceous pollen grains. The Carya family first appeared in Oligocene strata about 34 million years ago.

Fossils of hickory nuts show that the earlier hickory nuts had thinner shells. It indicates that over the period of time, hickory trees have developed a defense to seed predation by rodents.

Fossil records show that North America had the largest number of hickory species. It is quite likely that the genus of hickory originated from North America and later spread into Asia and Europe. 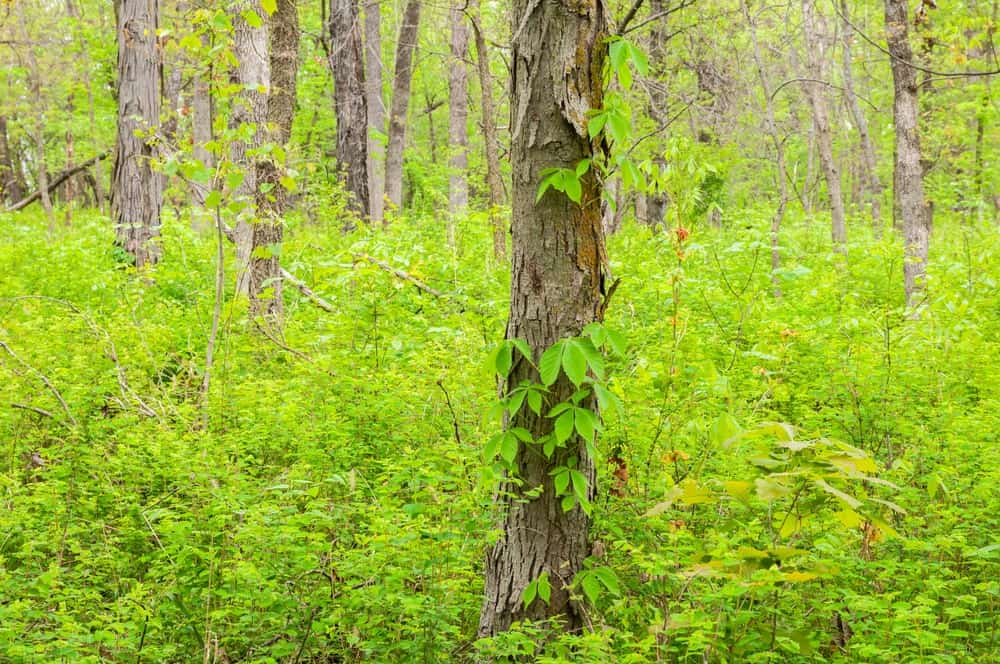 Shagbark hickory is found in southeast Canada and the eastern United States. This large, deciduous tree grows over 100 feet in height and can live for as many as 350 years! The tallest shagbark that has ever been measured is more than 150 feet tall.

The identification of Shagbark hickory is easy because they have shaggy bark. The bark of young trees is smooth that becomes shaggy as the tree matures.

The leaves are pinnate having 5 leaflets. The terminal three leaflets are larger than the basal ones. It is monoecious. The flowers are present on catkins that are long-stalked, present at the tip of old hickory wood.

The fruit is an edible nut that tastes very sweet. It has a very hard, bony shell which is contained in a green husk with four sections. As the nut becomes mature, it changes its color and turns dark.

Shagbark trees can tolerate a wide range of conditions such as acidic or alkaline soil and drought. They grow well in areas that are large, free from salty soil, and well-drained.

It can be wavy sometimes. It is not durable because of its susceptibility to insect attacks. It can also decay over time. Shagbark wood is commonly used to make ladder rungs, tool handles, flooring, wheel spokes, etc. 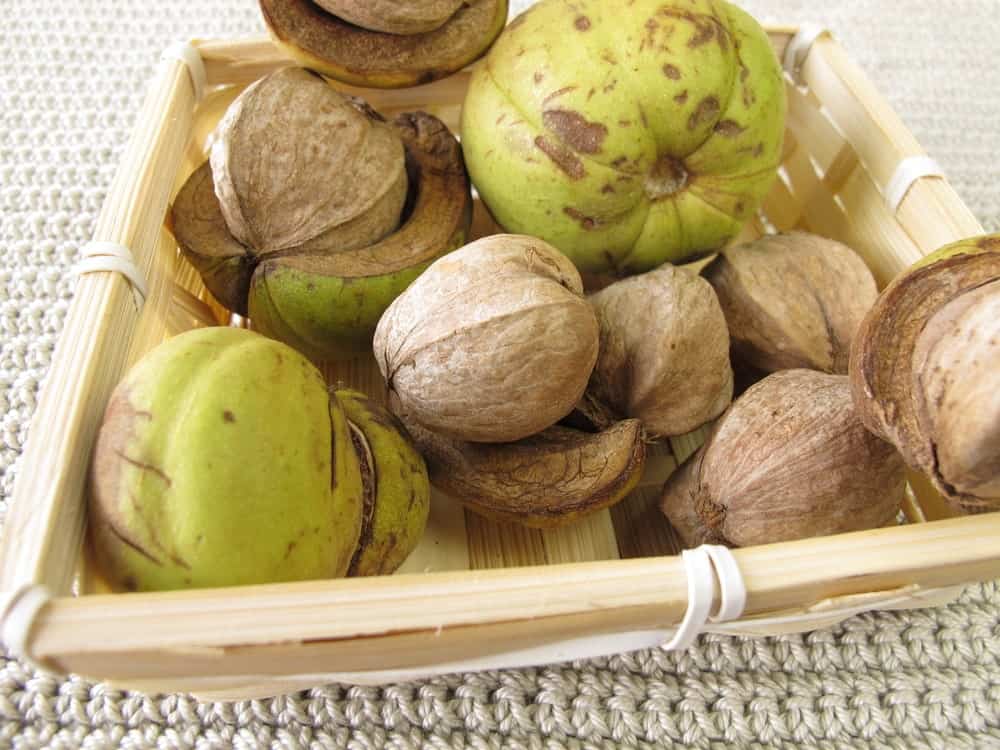 Shellbark hickory belongs to the walnut family. This low-growing tree can live up to several hundreds of years. They usually grow to 50 to 75 feet tall.

They grow best in moist soils. This hickory species cannot tolerate alkaline soil at all. They are intolerant to drought, salty soil, and salty sprays as well. They prefer growing in a large area with well-drained soil. 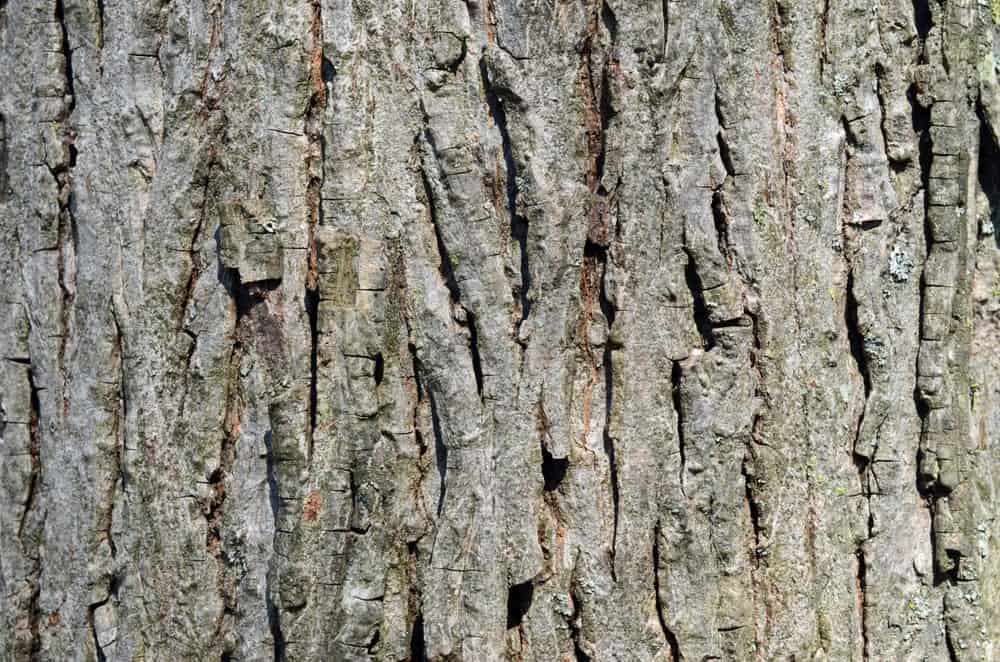 The Mockernut hickory falls in the walnut family. It is the most abundant type of hickory tree. It is found in the eastern half of the United States.

It can love as long as 500 years! Mockernut hickory tree grows straight to a height of 50 to 60 feet. Hickory wood obtained from this tree is used for products where flexibility, strength, and hardness are needed.

The name of this tree comes from a Latin word tomentum, which means, “covered with dense short hair.” This is because the underside of leaves has short hair. This characteristic helps in its identification.

The leaves are compound leaves and are found in an alternate fashion. They have seven to nine leaflets that have short hair on the underside and on the stalk. The terminal leaf is the largest. The nut has four sections.

It grows best in a humid climate, in soil that is slightly acidic. It does not tolerate alkaline or salty soil.

It can also be used for veneer but the quality is a major limiting factor. Lower-grade Mockernut hickory wood is used to make the blocking, pallets, and similar items. 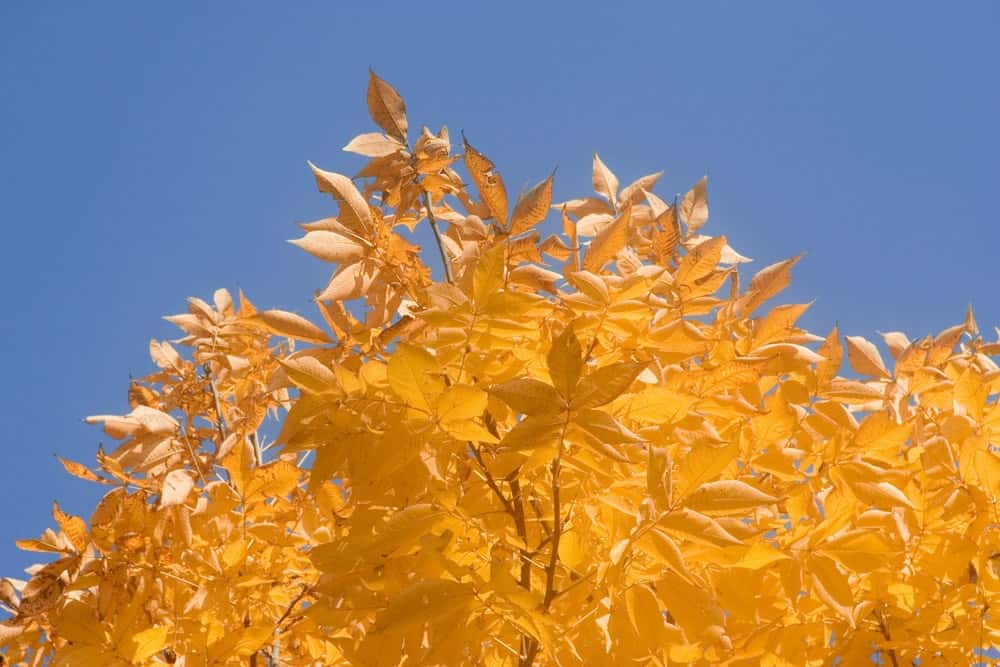 Pignut hickory is not an abundant species of hickory. It is found in Canada and the Eastern part of the United States. Pignut hickory is a dark-gray-colored hickory that grows up to 50 to 60 feet tall.

The bark of these trees may become shaggy as the tree ages. The leaves are compound, having five to seven leaflets. The leaflet at the end is the largest. The nut of pignut hickory is bitter. It is pear-shaped and has four ridges on the husk.

It grows well in a variety of soils. It can tolerate salty soil and drought conditions. It needs well-drained soil to survive.

Pignut hickory wood is used to make skis and tool handles. In colonial times, it was widely used to make wheels of wagons and brooms. 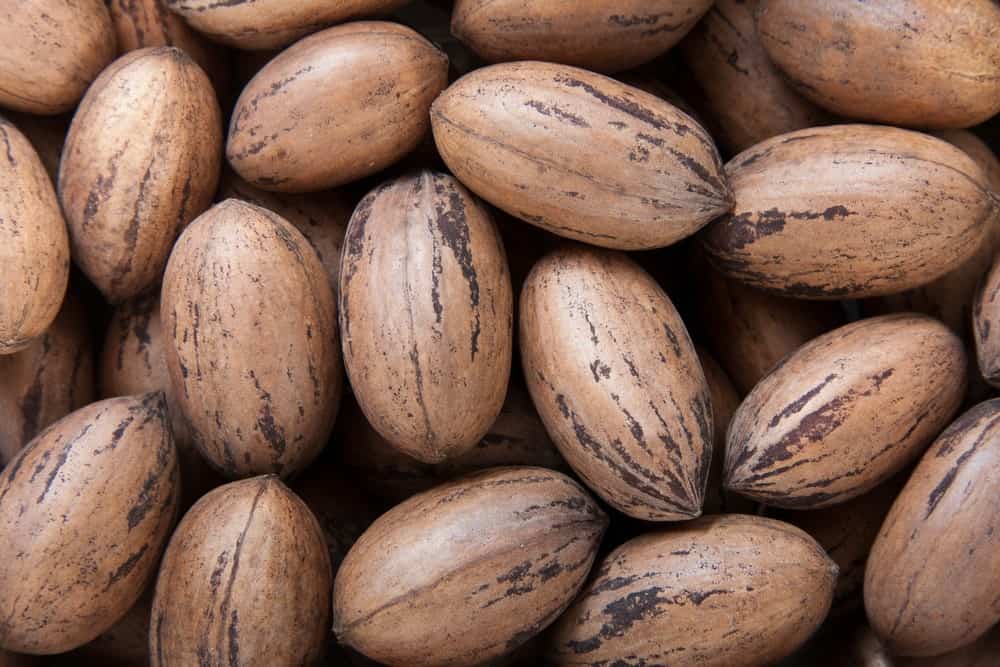 Pecan hickory is native to the southern United States and northern Mexico. This tree is tall and can grow to be as high as 40 to 75 feet. Due to fruit and leaf drop, it can be quite a messy tree.

It can tolerate acidic soil. It can also tolerate alkaline soils only moderately. It cannot withstand drought, salty soil, or salt spray.

Pecan hickory wood is used in making of paneling, flooring, millwork, furniture, brush handles, bending stock, woodenware, turnings, and toys. It is suitable specifically for liquid and food containers because it is odorless and tasteless wood. 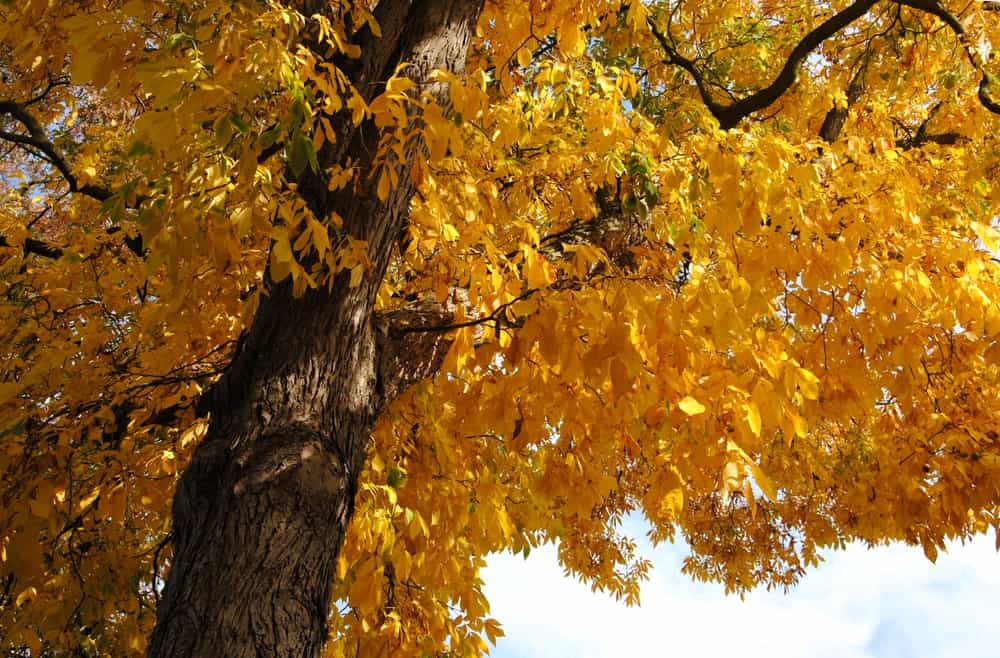 Bitternut hickory is also known as the swamp hickory. It is a large, deciduous tree that grows to a height of 35 meters.

The leaves of bitternut hickory are pinnate, having 7 to 11 leaflets. The apical leaflets are the largest among all. The flowers are small catkins. The fruit is a nut that is very bitter in taste, hence the name bitternut hickory.

The shell of the nut is very hard and bony. A prominent identification feature of this type of hickory is the yellow colored winter buds. It grows well in acidic soil. It can tolerate alkaline pH. It can also tolerate salt spray but it is intolerant to salty soil.

Bitternut hickory wood is widely used for pulpwood and lumber. It is hard and durable and hence it is commonly used to make furniture, dowels, paneling, ladders, and tool handles. It is also used to smoke meat.

It is native to the southeastern part of the United States. It can grow as high as 25 meters. Leaves of the scrub hickory are pinnate, having three to seven leaflets. The leaflets have a coarse, toothed margin. The nuts are edible and sweet, enclosed in a hard shell. 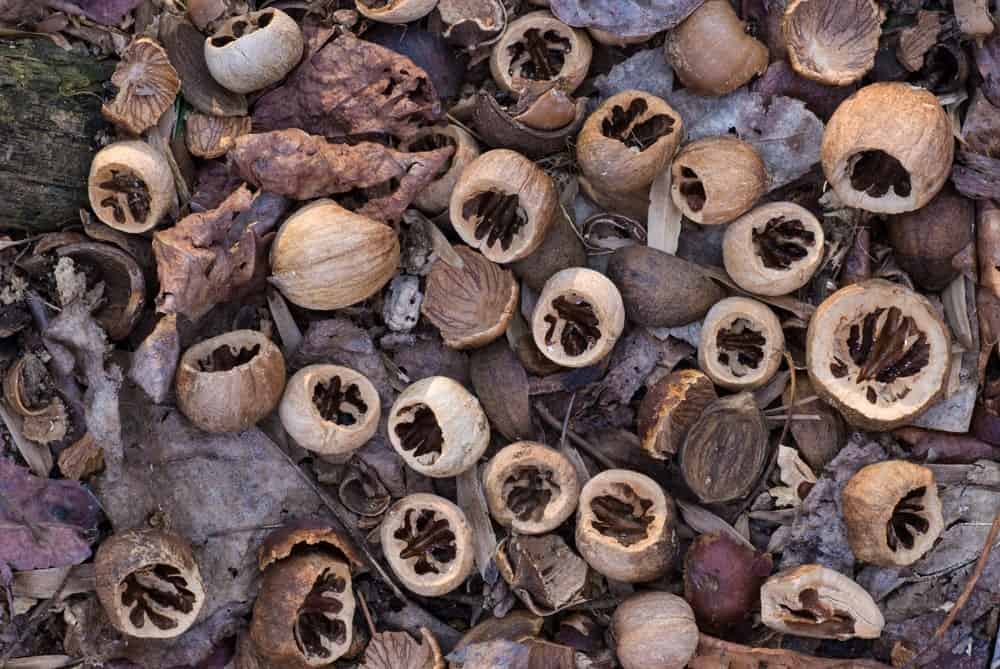 This very rare type of hickory is native to the Eastern side of North America. The red hickory tree can grow to a height of 30 meters. The leaves are pinnately compound and have five to nine leaflets with the terminal leaflet being the largest.

The mature bark is gray in color. The nuts are either present as a single unit or in clusters of two or three at the end of the branches. Male flowers are longer while female flowers appear bizarre.

It is native to the southeastern United States. It can grow to a height of about 80 feet.

Black hickory is a North American tree. It is an endangered hickory species in Southwestern Indiana. The tree can grow to a height of about 41 meters. The leaves are scaly and a rusty brown in color. Leaves are pinnate and have seven leaflets. The nuts are sweet and edible. 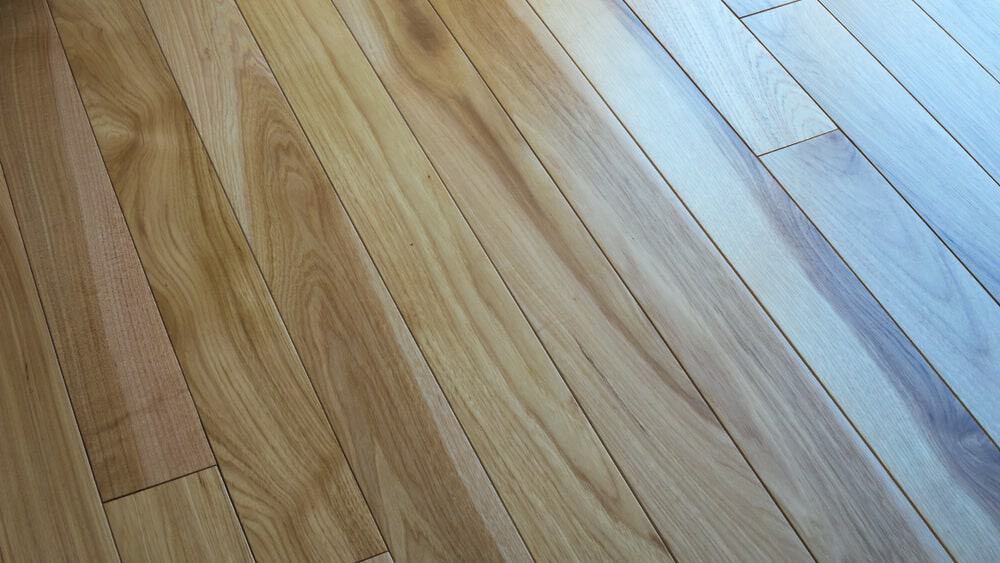 Hickory wood is stiff, hard, dense, and resistant to shock. The combination of toughness, strength, stiffness, and hardness that is found in hickory wood is not found in any other type of commercial wood despite the fact that other woods might be stronger.

Formerly, baseball bats were made from hickory wood. At present, they are made from ash. It is also seen being used in chimneys and wood-burning stoves because it has high energy content.

In earlier times, hickory wood was used to construct aircraft. It is highly durable and resists water, due to which it is often used to make floorings.

Most types of wood may appear similar from a distance but when you see closely you will observe certain distinctive features that help in identification. Different types of hickory wood have different strength, hardness, and durability.

Hickory wood is medium brown in color with a reddish hue. It may have gold or yellow colored highlights. High-grade hickory wood has straight grains. It offers a consistent and uniform quality which makes it ideal to be used in high-end businesses and homes.

Lower grade hickory wood has knots and streaks. It is used in cabinetry. It gives a rustic appearance that makes it ideal to be used in cabins, lodges, and countryside homes.