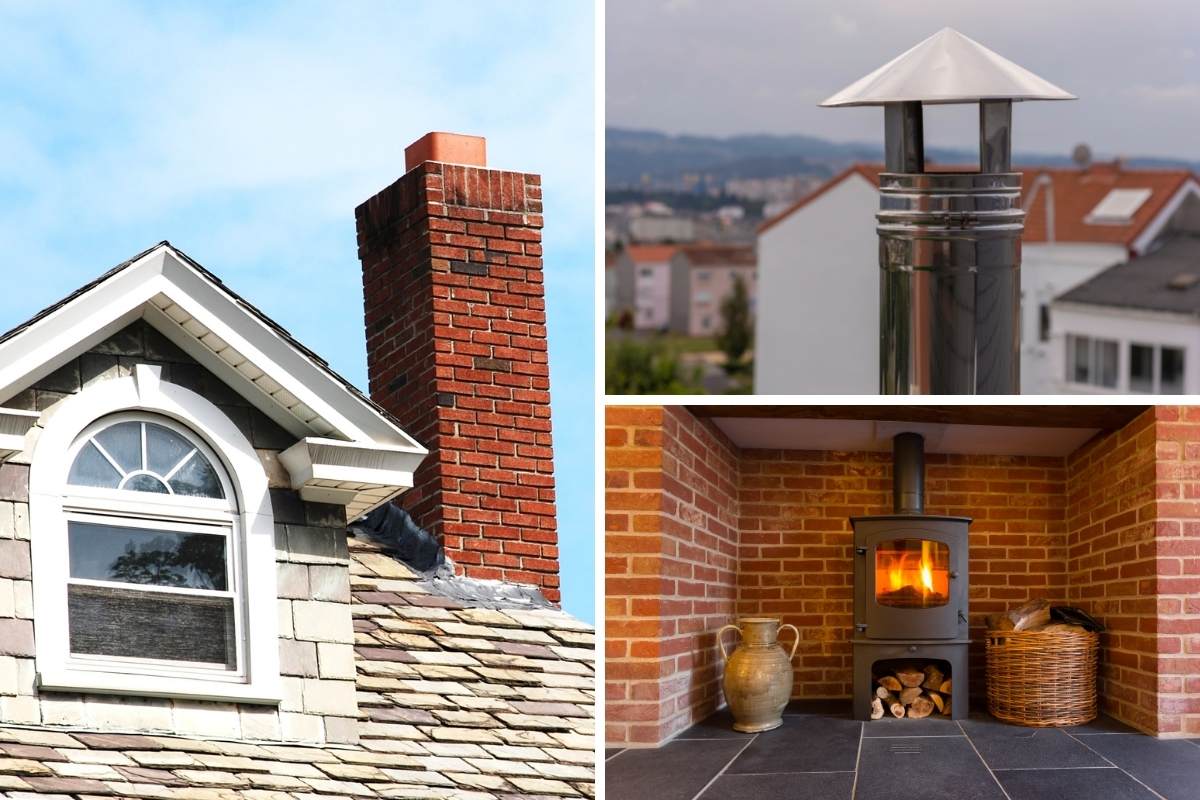 Most houses in today’s time have chimneys and fireplaces installed within them in order to keep the house warm and comfortable, especially during the winter season.

A chimney is like a pipe or a tunnel-like channel that serves the main purpose of transferring or dispersing smoke, heat and flue gasses from stoves and fireplaces out into the atmosphere. Chimneys basically redirect all the unwanted fumes and smoke out into the open without spreading or releasing it inside your home space.

From an architectural and aesthetic point of view, chimneys serve a very important function since not only do they look really nice, but some are so beautifully constructed that a house actually looks complete with a chimney. If anything, this strongly emphasizes on the need to install a chimney with highly durable and quality materials when building a home or remodeling an existing space.

How Do Chimneys Work?

As simple as chimneys look in appearance, many people often wonder in fascination about how do chimneys really work. If you were to put it simply, your chimney plays a very key role in keeping your house warm and also ensuring that your fireplace functions properly.

The science behind the workings and the function of chimneys is also very interesting.

As mentioned previously, chimneys basically help remove all the byproduct gases from the air. Every fireplace requires a chimney because there has to be an outlet for the transfer of heat, gas, and smoke. One of the biggest cornerstones for any chimney is ‘airflow’ without which it wouldn’t exactly be functional.

Just like warm, moist air often escapes through your attic, similarly, warm air or smoke rises up and goes out through your chimney. This is referred to as the “stack effect”. The air that travels up the chimney is called the ‘draft’. Any well-functioning and properly built chimney will consist of a strong draft that allows the pull of smoke and gases out into the atmosphere through the chimney.

There are 4 key factors that affect the chimney draft, including chimney height, air pressure, the flue, and obstructions & damage. These 4 key features together affect how well your chimney works and you must get them inspected if your chimney ever starts to malfunction or doesn’t allow airflow as well as it should. 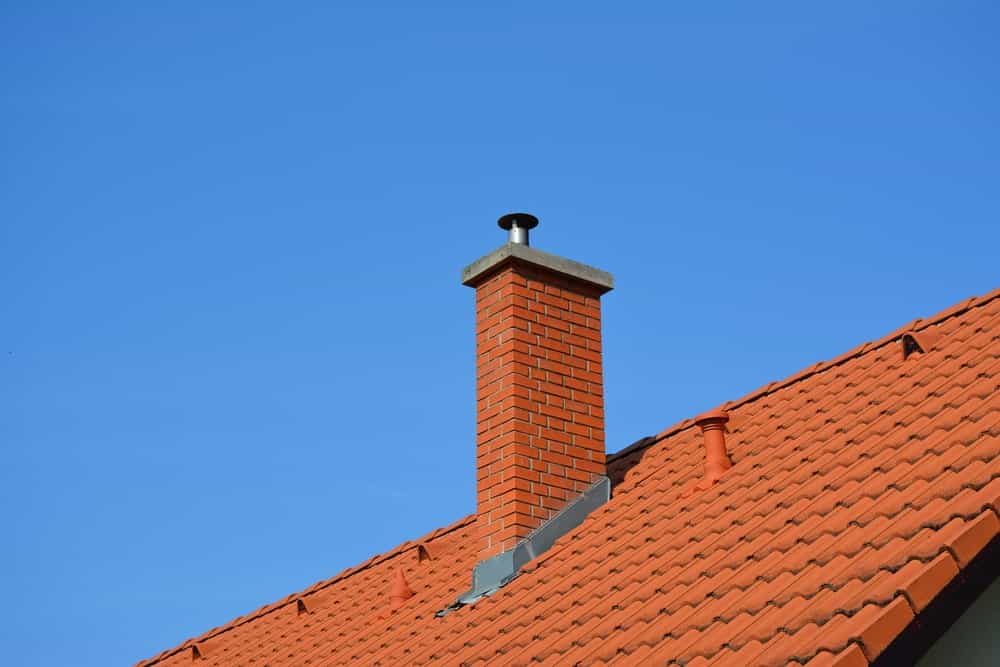 This is believed to be ‘the’ standard type of chimney that is typically built using materials like bricks, cement, mortar, blocks or stone. Masonry chimneys are usually accompanied by masonry fireplaces that are simple indented walls where you create fire on logs of wood.

All the heat and smoke passes upwards through a tunnel-like channel to the roof and then out into the atmosphere. An interesting feature of this type of chimney is that often the bricks that are used in its construction have the ability to absorb heat. This comes in really handy, especially during the winter season as some of the absorbed heat radiates to other rooms and keeps them warm.

Furthermore, the fireplaces of these chimneys have amazing aesthetic value and sense which can greatly make your space look incredible. If the masonry fireplace in your house is one of those elegantly and stylishly constructed types, chances are that it will have an excellent resale value.

Masonry chimneys are really durable and can last as long as your house, given that you ensure proper maintenance, regular cleaning and use the right kind of accessories. However, masonry chimneys require a super concrete and solid foundation during construction because it typically weighs around 6 to 7 tons. 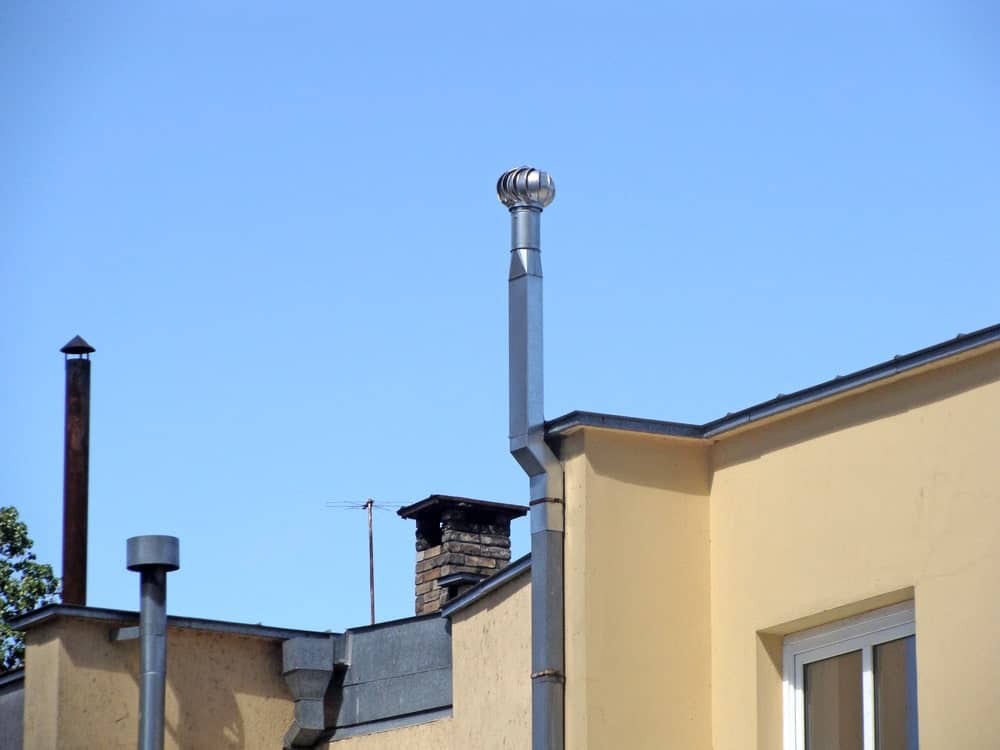 These are quite similar to masonry chimneys, except that they take up a lot of space and the bigger chimney versions may also cost more than the latter type of chimneys. Also, their aesthetic value is not as good as that of masonry chimneys.

Metal chimneys can either be double-walled or triple-walled and are often enclosed within different types of casings. They are usually encircled within a masonry chimney case, a sided frame or sometimes even in a full wooden structure in order to boost its aesthetic value and appeal.

In a double-walled metal chimney, there is insulation between the walls, whereas, in a triple walled chimney, the layers of the wall contain air between them, the purpose of which is to provide insulation and dissipate heat.

Metal chimneys are commonly constructed using bare stainless steel that often appeals to a number of homeowners because most of them really like the high-tech look of these chimneys. One downside of these chimneys is that they aren’t as ‘flexible’ as masonry chimneys. They are generally limited to 15 and 30-degree angles. The different types of metal vents used in these chimneys are usually characterized by the kind of fuel that they exhaust. 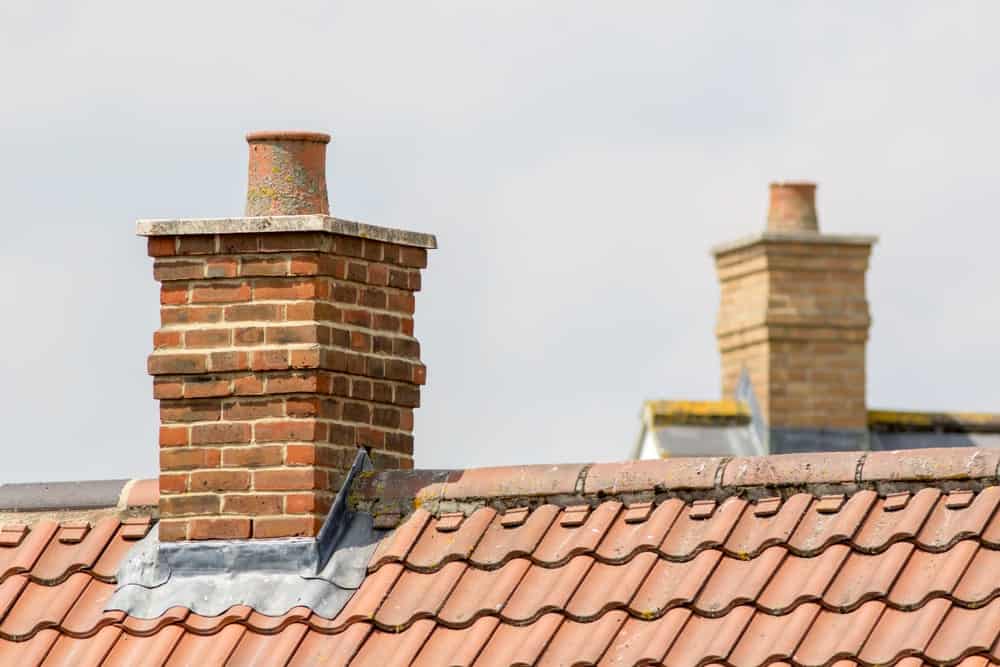 These chimneys are more of the modern, contemporary types of chimneys that you will find in most homes in today’s time. The design of factory-built or prefabricated chimney is new and trendy and they come with quite innovatively designed fireplaces, too.

This type of chimney is so called because of two main reasons. Firstly, the fireplace of these chimneys is a firebox that is fabricated from sheet metals and secondly, these chimneys are manufactured or constructed in factories before being delivered to the buildings or homes where they need to be installed. You can also choose from a variety of different materials to be used in the construction of the chimney, as well as, the fireplace.

However, one important thing that you should consider before installing this type of chimney is that its fireplace doesn’t fit all kinds of chimneys. In other words, prefabricated fireplaces only work well with specific chimneys so it is best that you get the right match. Either get both the chimney and fireplace as a set or thoroughly read through the specifications mentioned on their user manual.

Factory built chimneys are an excellent option for you, considering that you want a modern-looking design that suits your home, and also one that won’t burn a hole in your pocket. Since this chimney is easy to install and also provides increased freedom to homeowners in terms of choosing their own creative design, it is quite a popular choice among homeowners.

However, there is one major downside to prefabricated chimneys. They are not very durable and chances are they probably won’t even last you a whole lifetime. Even with regular maintenance and cleaning, the chimney parts will inevitably begin to age and you might have to repair or replace them.

As mentioned above, prefabricated fireplaces are not all well-suited to the same type of chimney. There are four main types of factory-built chimneys that you can choose from to install in your home. They are:

As the name suggests, this type of chimney consists of air flowing in between multiple layers of hard metal, which is used in the construction of these chimneys. The purpose of the air is to circulate between the metal and dissipate all the heat. The air also absorbs a large amount of heat that rises through the chimney.

Air cooled chimneys are less costly to install and purchase as compared to most other types of chimneys, however, they are not suggested to use if you reside in a place where the weather is cold for the most part of the year. This is because severe cold weather can result in extreme condensation within the fireplace system, which consequently leads to premature corrosion of the entire metal construction used in the chimney.

These chimneys are also called mass-insulated chimneys since they are constructed using twin or double layers of metal, which, in most cases, is stainless steel. The insulation material is usually placed between two metal layers so that the exchange of heat through the metal is significantly reduced.

The chimney is constructed in a way that it looks like a stainless steel pipe or cylinder placed or installed within a bigger pipe or cylinder. The resulting space between the two is fully-packed with an insulating material.

Most varieties of double walled chimneys are way lighter than the traditional brick chimney which means that they can be installed fairly easily and quickly without the need for external material or assisting equipment.

This type of chimney is quite similar to the air-cooled chimney, except that the purpose of the air here is not to move around to cool or dissipate heat but to act as an insulator. So, air-insulated chimneys are primarily built and constructed to minimize air movement between the multiple layers of metal or stainless steel.

When the air is trapped between the metal layers, what happens is that the air provides great insulation in-between instead of dissipating or drawing away heat.

Although air insulated chimneys are a tad difficult to install and may even fall heavy on the pocket, they are excellent for cold weather conditions since they not only react really well to extreme colds, but also provide the chimney and fireplace system with improved longevity and performance. This feature makes air-insulated chimneys highly durable which means that regardless of how they might be, they are worth every penny.

As the name obviously suggests, combination chimneys make use of features from a variety of other different types of chimneys.

For example, one type of combination chimney may offer an amalgamation of air cooling, air insulating and/or mass-insulating chimney designs. What this does is that it provides homeowners with a chance to play around with chimney ideas to come up with an innovative design that not only sits well with the interior of their home but is also suits the weather conditions in which they live.

Furthermore, when using the main design elements of other chimney types, one can easily figure out with the help of the manufacturers which style or design will be the most durable and long lasting so that you don’t need to constantly invest in repairs and maintenance. 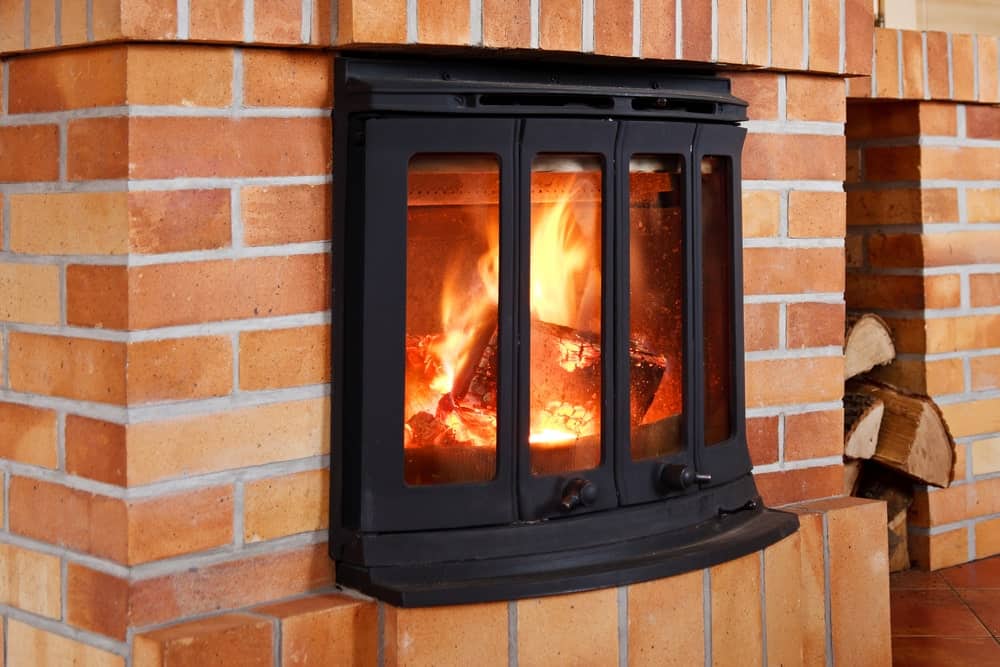 This is a type of fireplace chimney that makes use of fireplace inserts which are usually special kinds of wood stoves. They are specially designed to be able to perfectly fit in an open masonry fireplace. The stove is directly connected to the top of the chimney with the help of a stainless steel liner system. These inserts are typically inserted into an existing masonry fireplace and are further connected to the chimney and the flue leading outside. 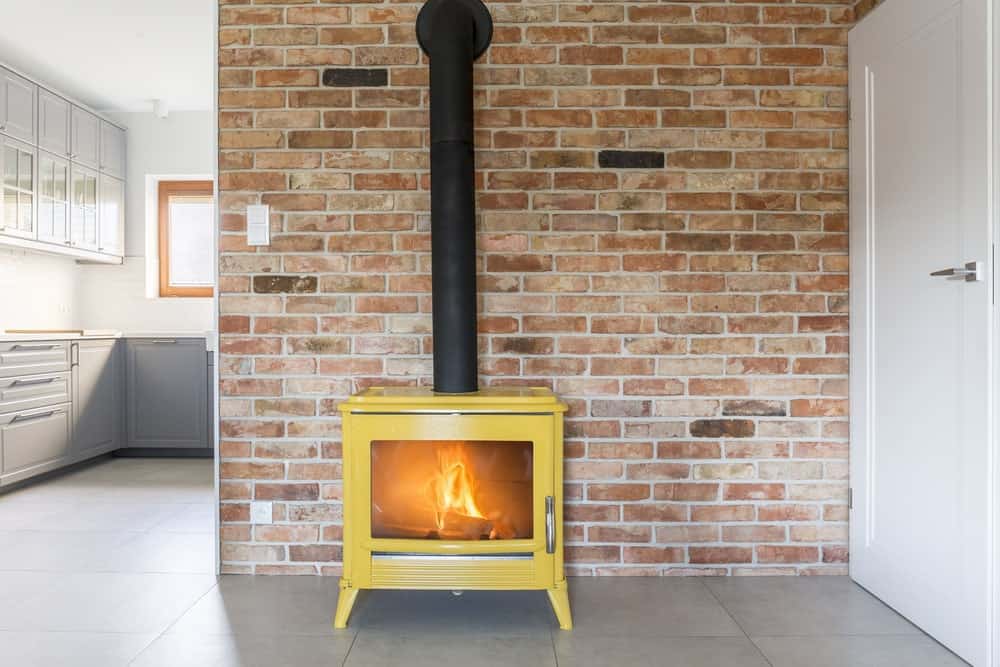 This is a type of stove chimney in which a freestanding stove is inserted or installed into a custom-built chimney. The kind of chimney used here can either be masonry or one of the prefabricated factory-built metal chimneys. The chimneys are also duly tested for their ability to be used with wood burning appliances. 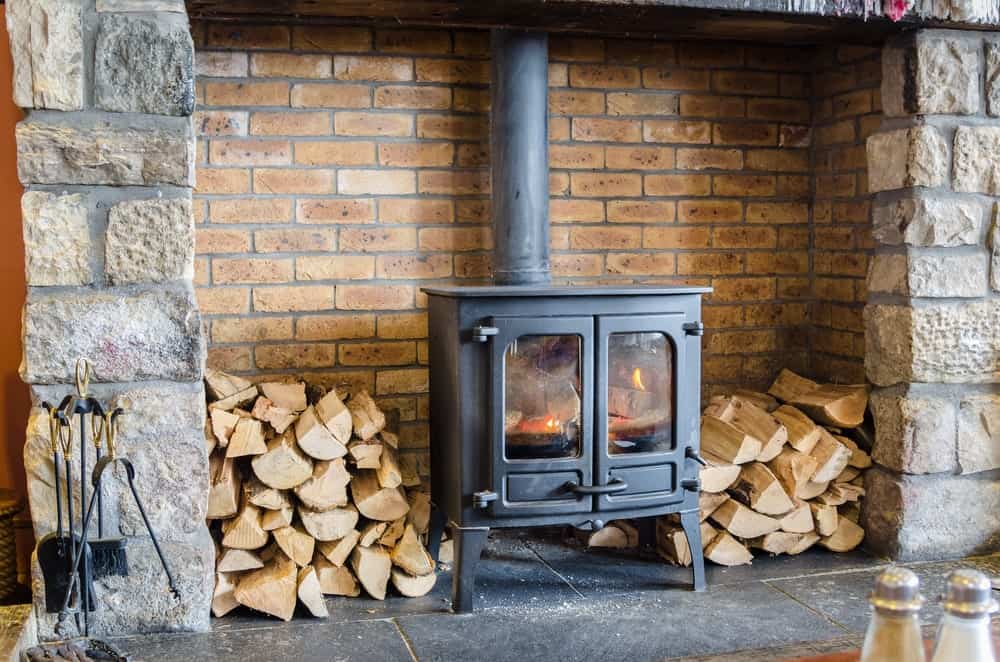 These are probably one of the most ancient kinds of chimneys that were commonly used during the 1800s. Wood burning stove chimneys, as the name suggests, burn wood for heat. They also consist of a stove pipe that extends from the base of the chimney.

Most people confuse this type of chimney with the masonry chimneys; however, they are entirely different. The difference is that in the latter case, one cannot have the stove pipe direct through the roof.

Interestingly though, as ancient as this chimney is, it has been found making a steady comeback in recent times, considering how energy cost is sky-high.

Now that you know all about the different types of chimneys, it will be easier for you to decide which one to install if you ever remodel your current house or shift to a new one!