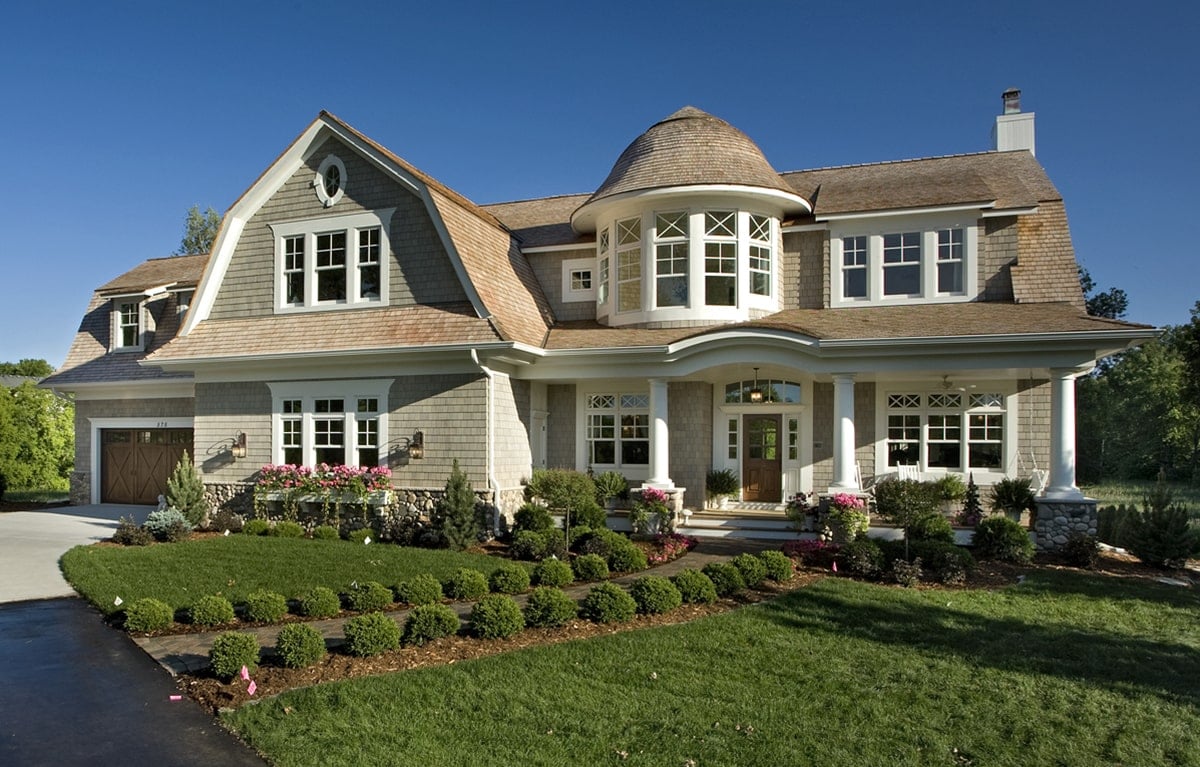 Check out these spectacular homes showcasing the Shingle-style homes. 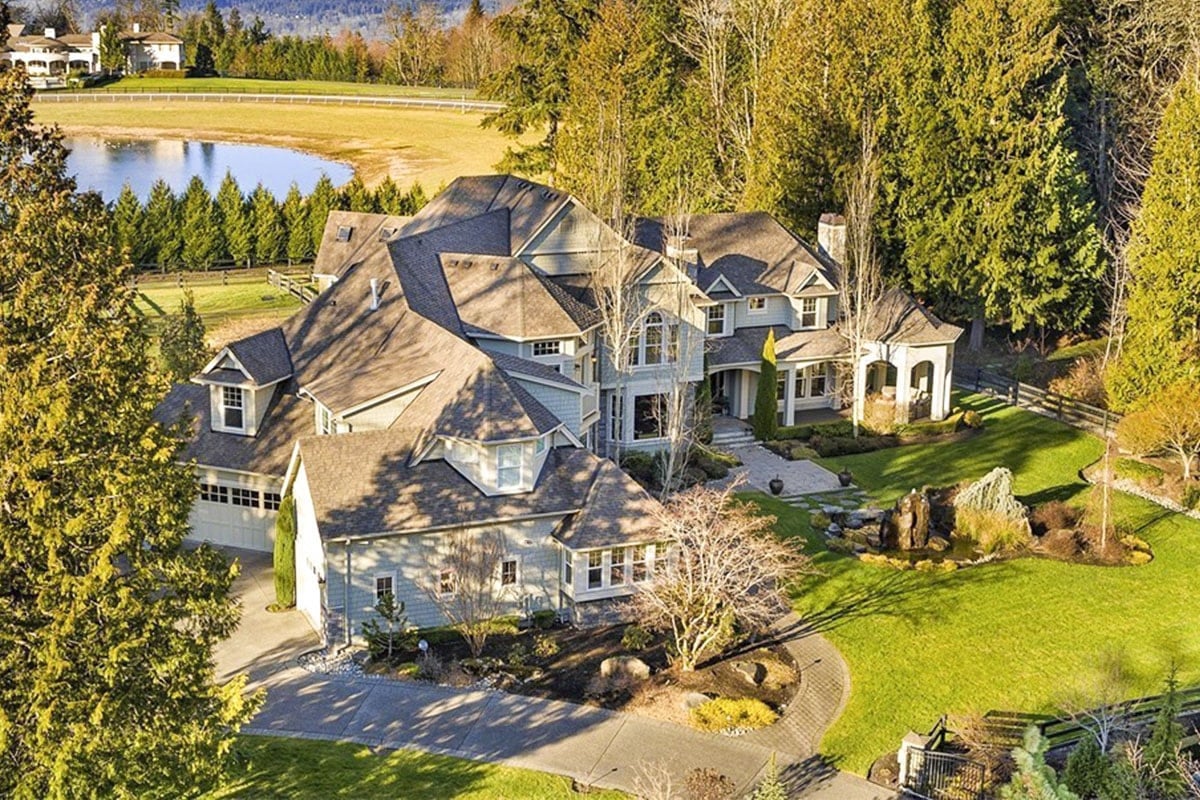 This is an aerial view of the front of the shingle-style house that has a large lawn, shrubs and tall trees that complement the light-tones shiplap exterior walls of the house along with its various windows, hipped rooftops, turrets and arches. 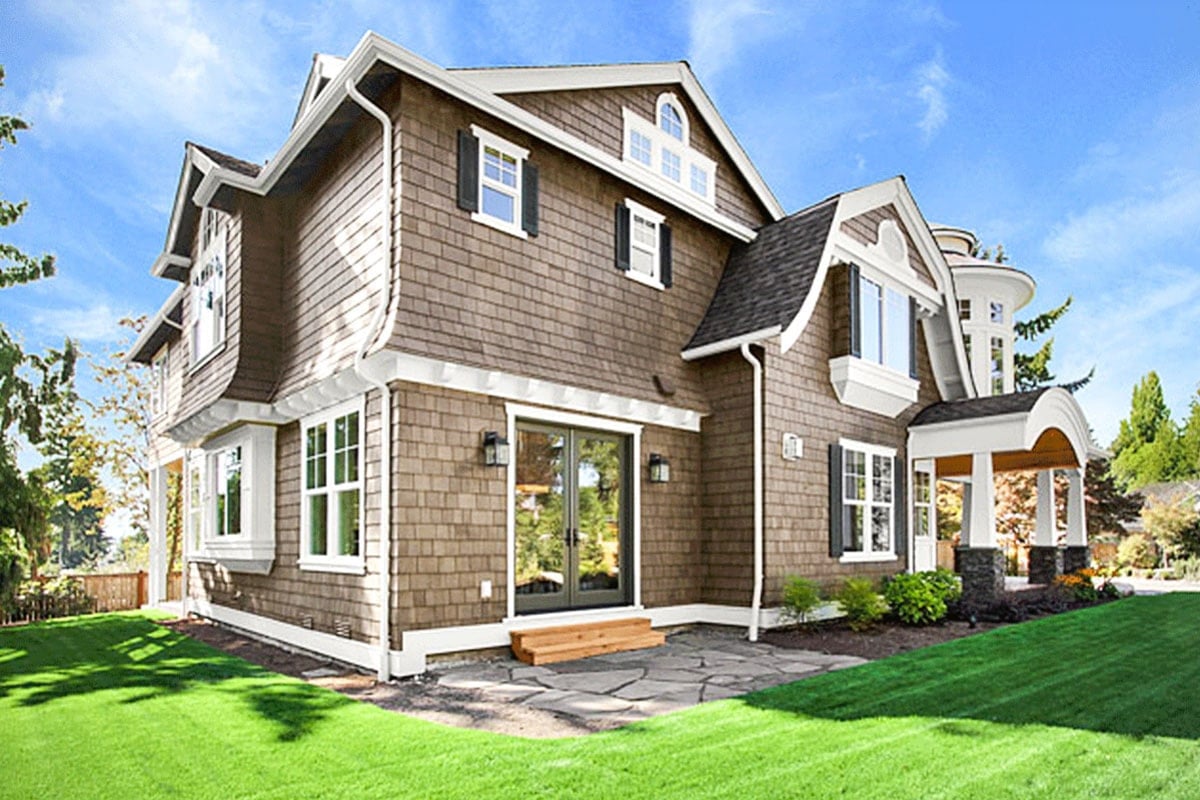 This is a view of the side exterior of the shingle-style home showing the covered porch and a French door that leads to the living room inside. The brown exteriors of the house are complemented by the lush landscaping of grass lawns, shrubs and mosaic stone walkways. 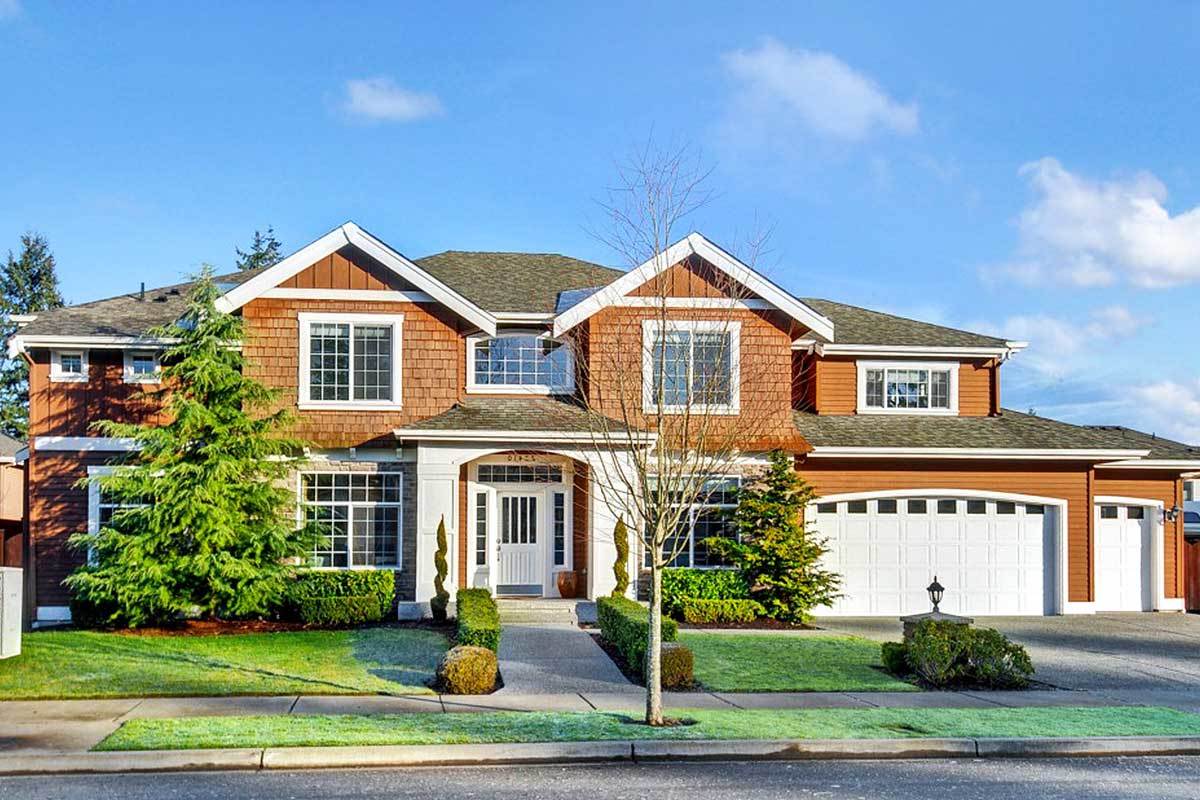 This is a view of the front of the shingle-style home that has brown exterior walls accented by the white elements and the lush landscaping of grass lawns, pine trees, shrubs and a concrete walkway that leads to the main entrance. 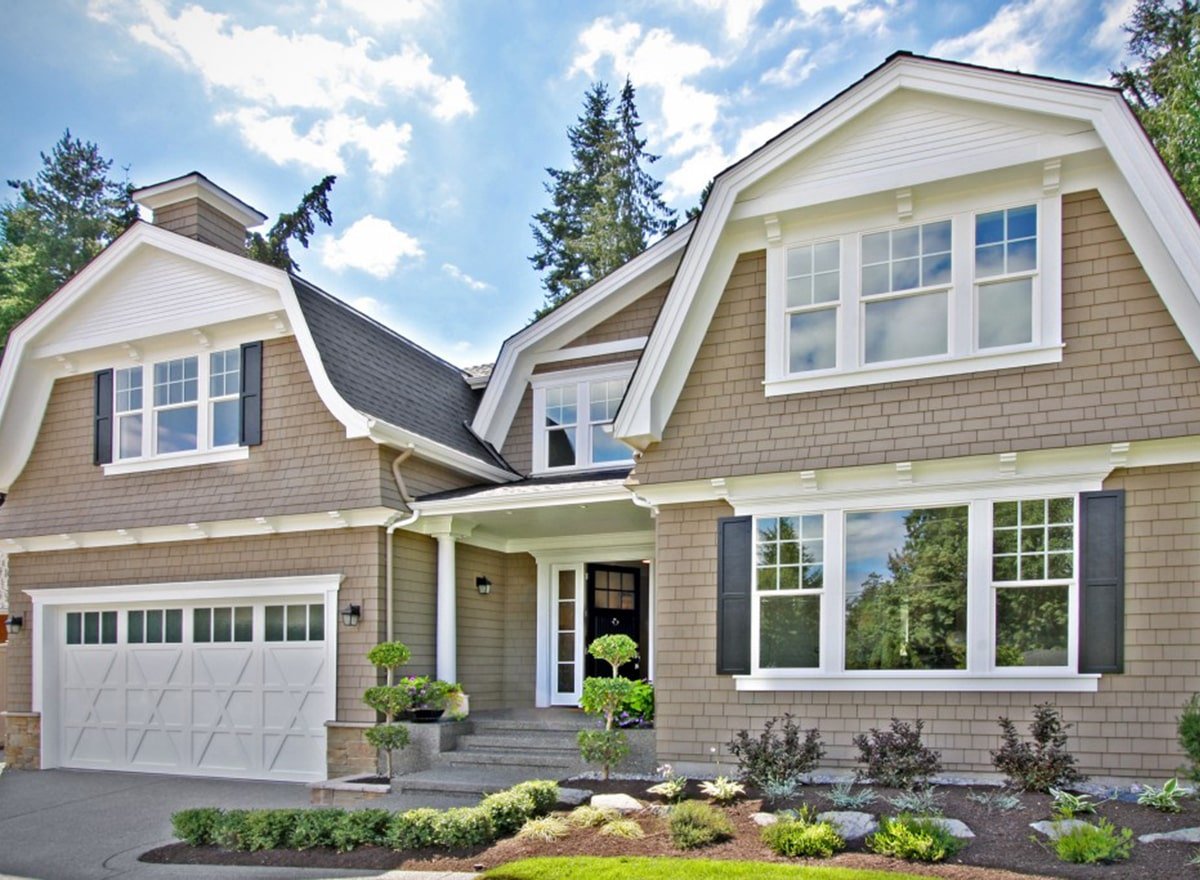 This is a close look at the front of the shingle-style home that has gambrel roofs, light beige exterior walls, white frames and accents and lush landscaping that has a concrete driveway, a concrete walkway, shrubs and planters. 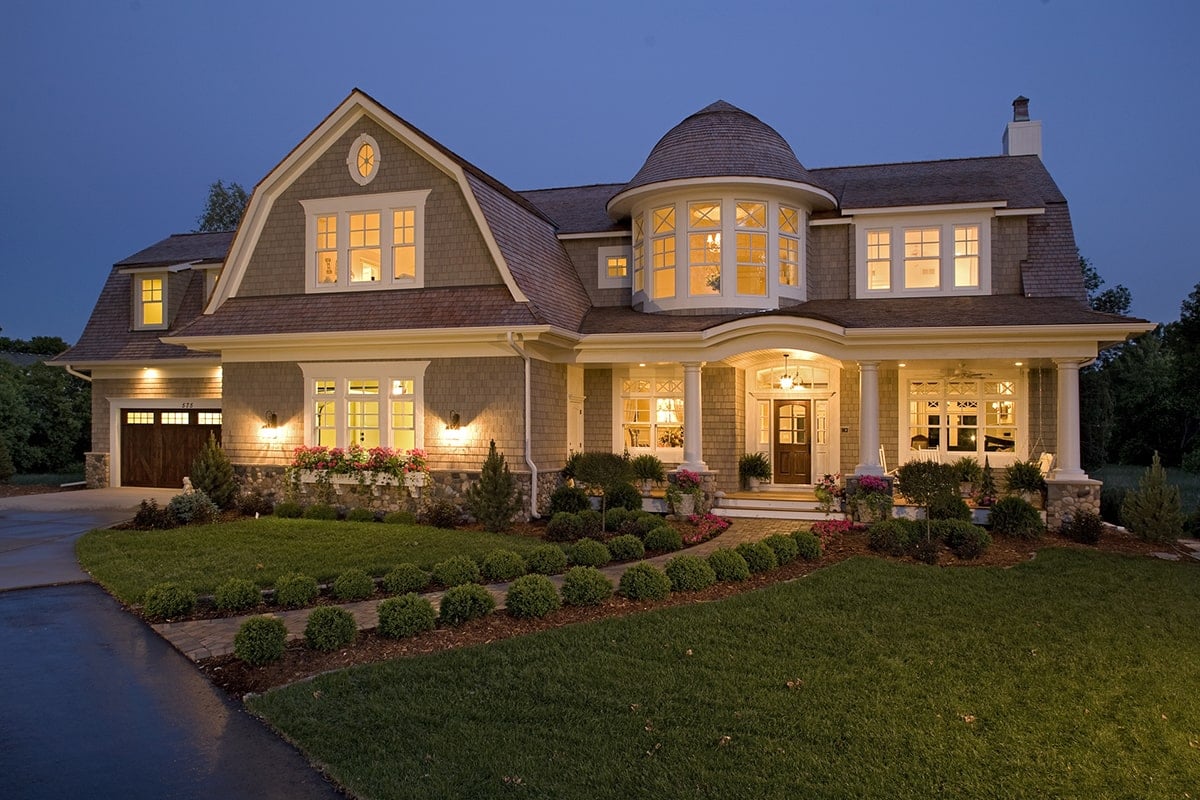 This is a close look at the front of the house with a gambrel roof, a round turret main hall and warm lighting that glows from interior to exterior complemented by the landscaping that has a mosaic stone walkway flanked by grass lawns and shrubs.

This shingle-style home has white patterns on its exterior walls complemented by the large glass windows and warm lighting. These are then augmented by the landscaping of the front lawn that has grass lawns, shrubs and a stone walkway. 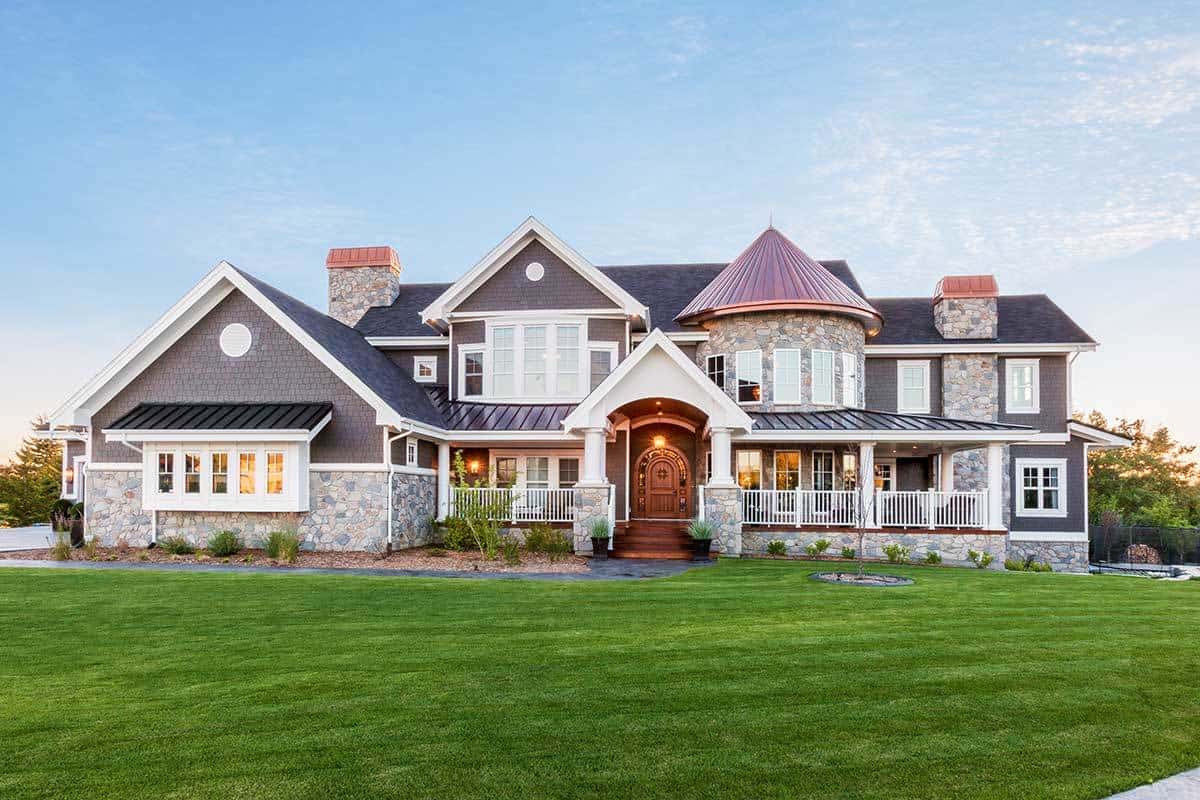 This is a full view of the front of the shingle-style home that has gray textured exterior walls that pair well with the stone mosaic wall accents. These are then elevated by the surrounding well-manicured grass lawn and an asphalt walkway. 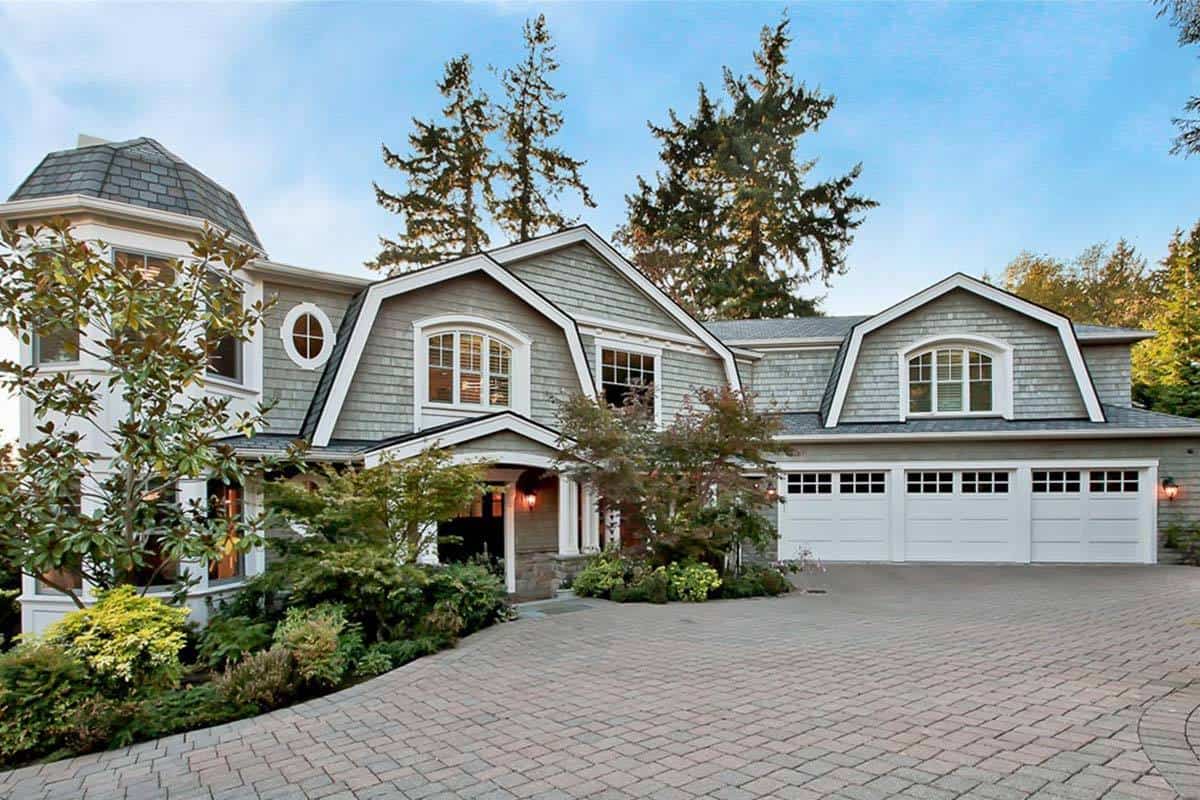 This is a close look at the shingle-style home with gambrel roofs, arched windows and a large stone brick driveway and courtyard that are complemented by the miniature lush gardens on the sides of the main entrance. 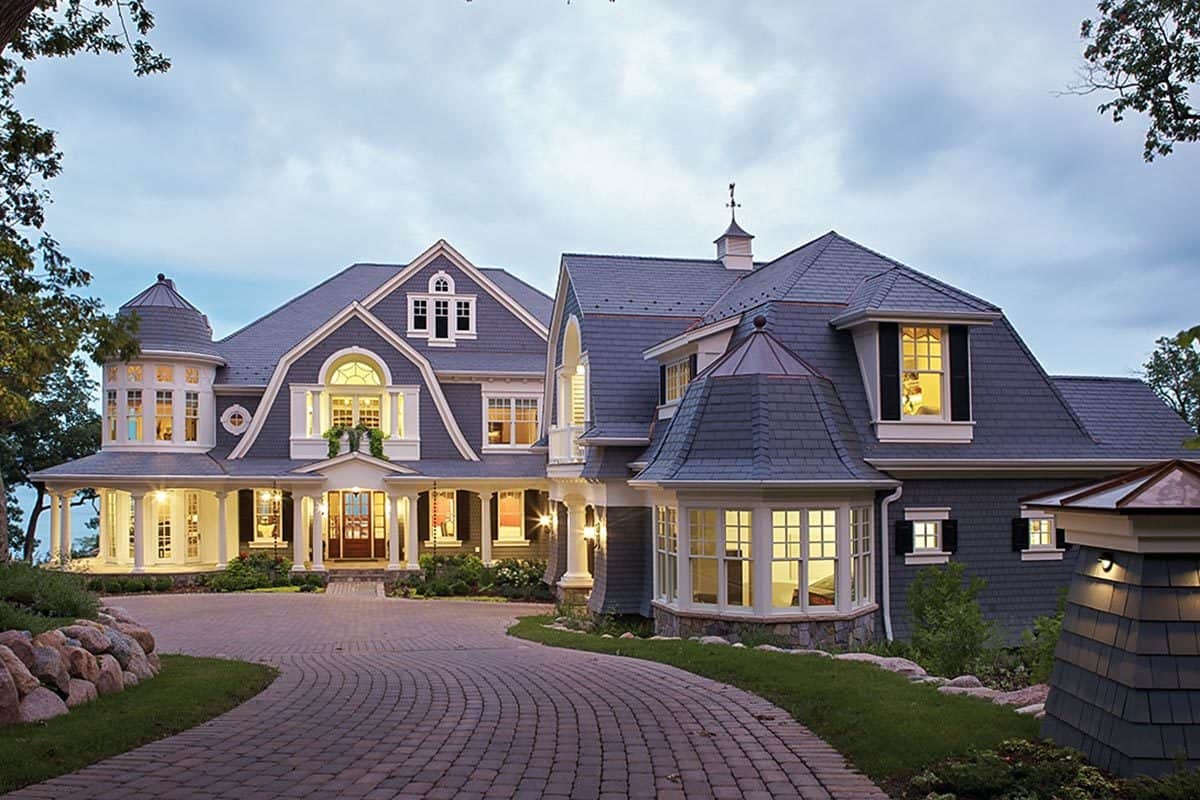 This shingle-style home has a red brick driveway flanked by grass and stones leading to the gray exteriors of the house with turrets and gambrel roofs. These are then augmented by the warm glow of the interiors and exteriors. 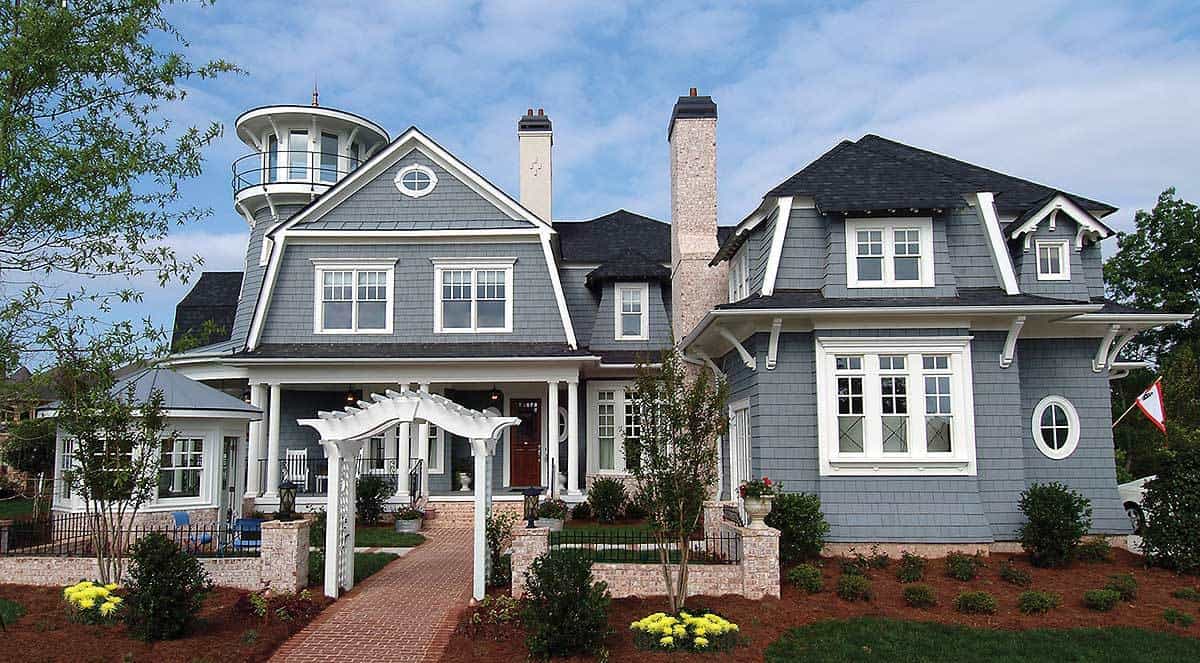 This is a close look at the front exterior of the shingle-style home with gray exterior walls, white accents on the windows and doors along with tall brick chimneys that match the fences of the front lawn.

The following are photo examples of Shingle-style interiors (room-by-room). Below each photo are links that take you to extensive Shingle-style photo galleries for each room.

The following examples are from this house (Source: Architectural Designs). 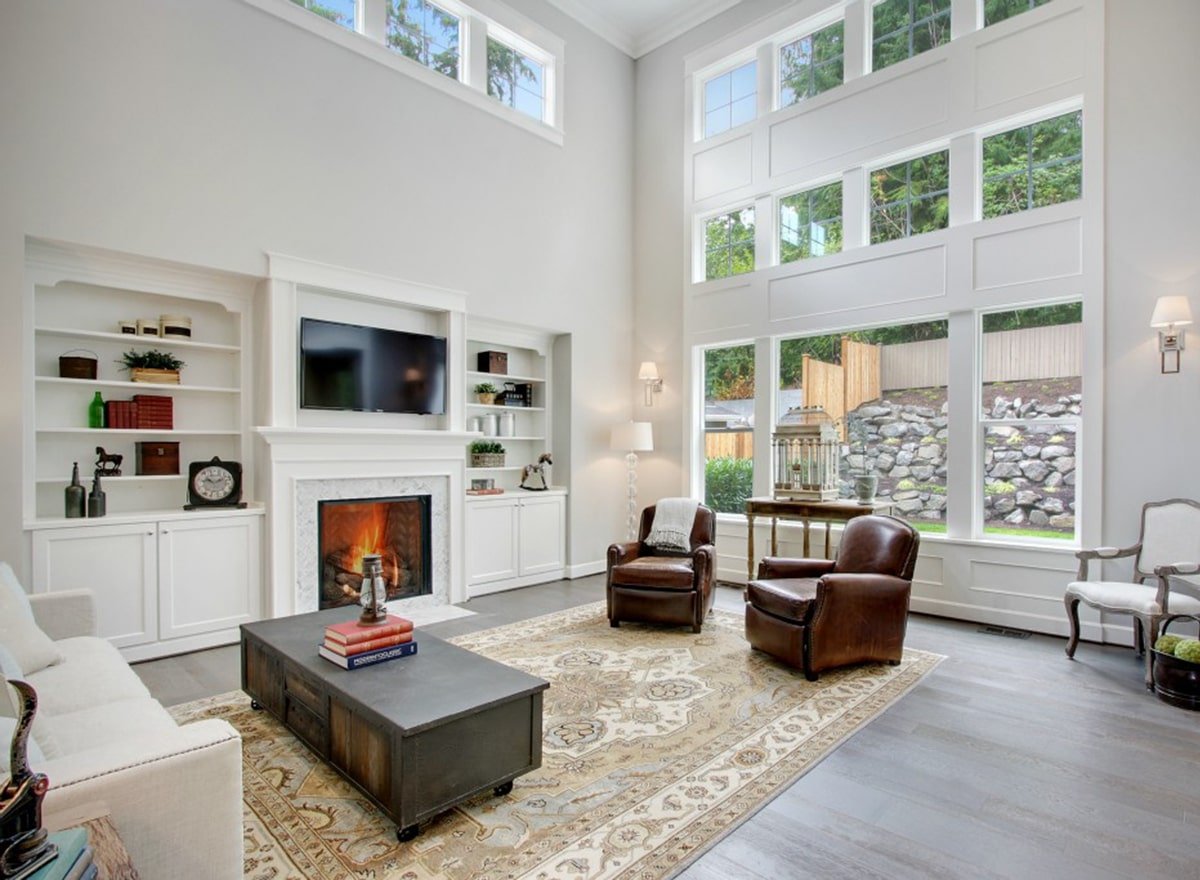 This is a bright living room with white walls and white built-in cabinets and shelves that are brightened by the natural lights coming in from the windows. These bright elements make the wooden coffee table and leather armchairs stand out. 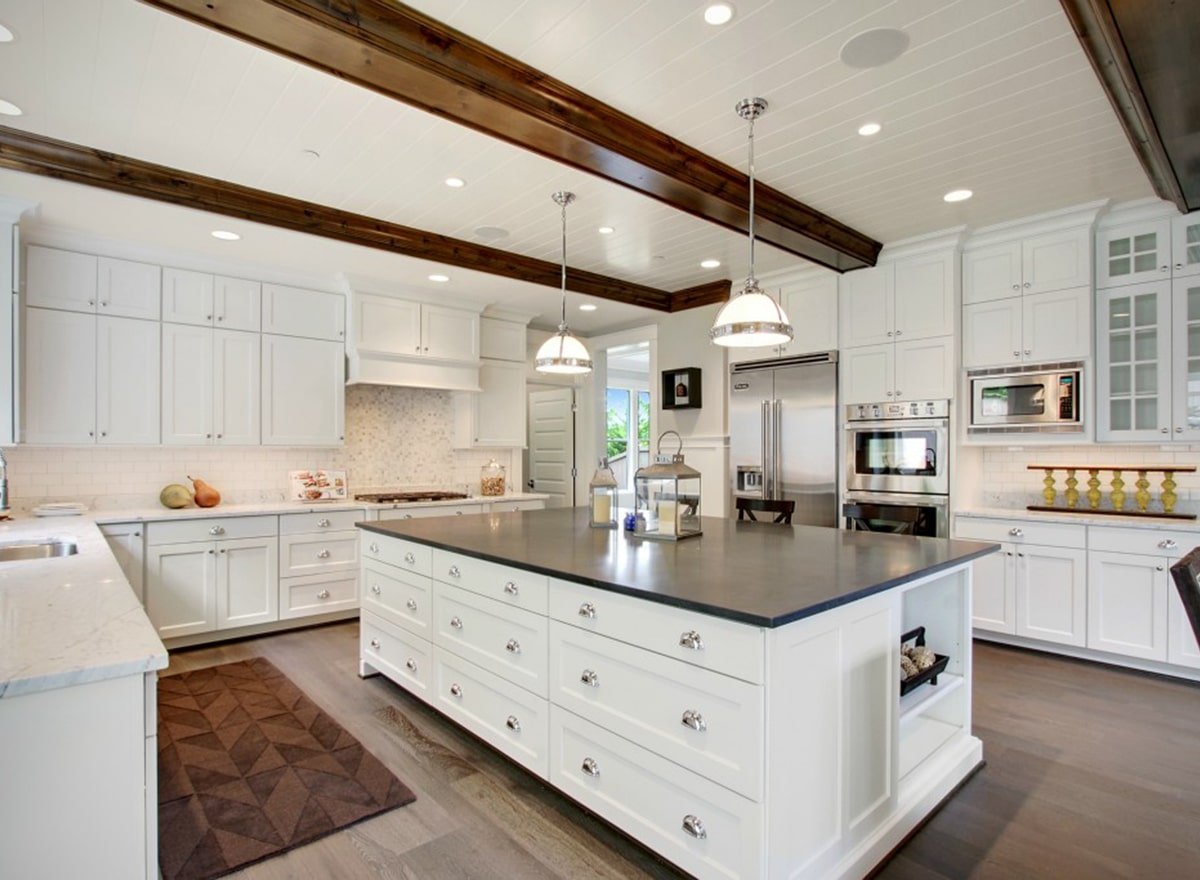 The kitchen is dominated by the pure white shaker cabinets lining the walls and the matching shaker drawers on the large kitchen island contrasted by its black counter. These are then complemented by the beige backsplash and exposed wooden beams of the ceiling. 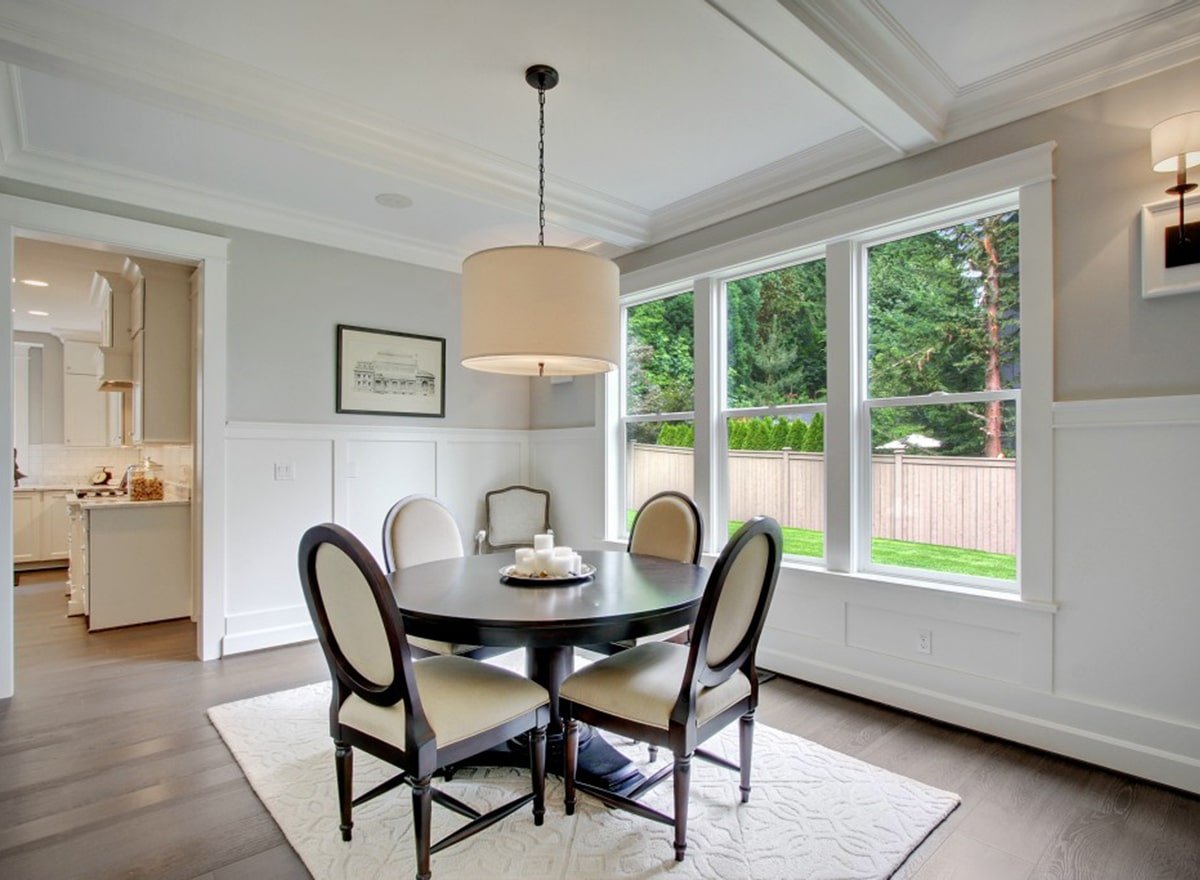 The dark wooden round dining table and matching cushioned oval back chairs stand out against the white wainscoting and white area rug on the hardwood flooring brightened by the natural lights coming in from the large windows. 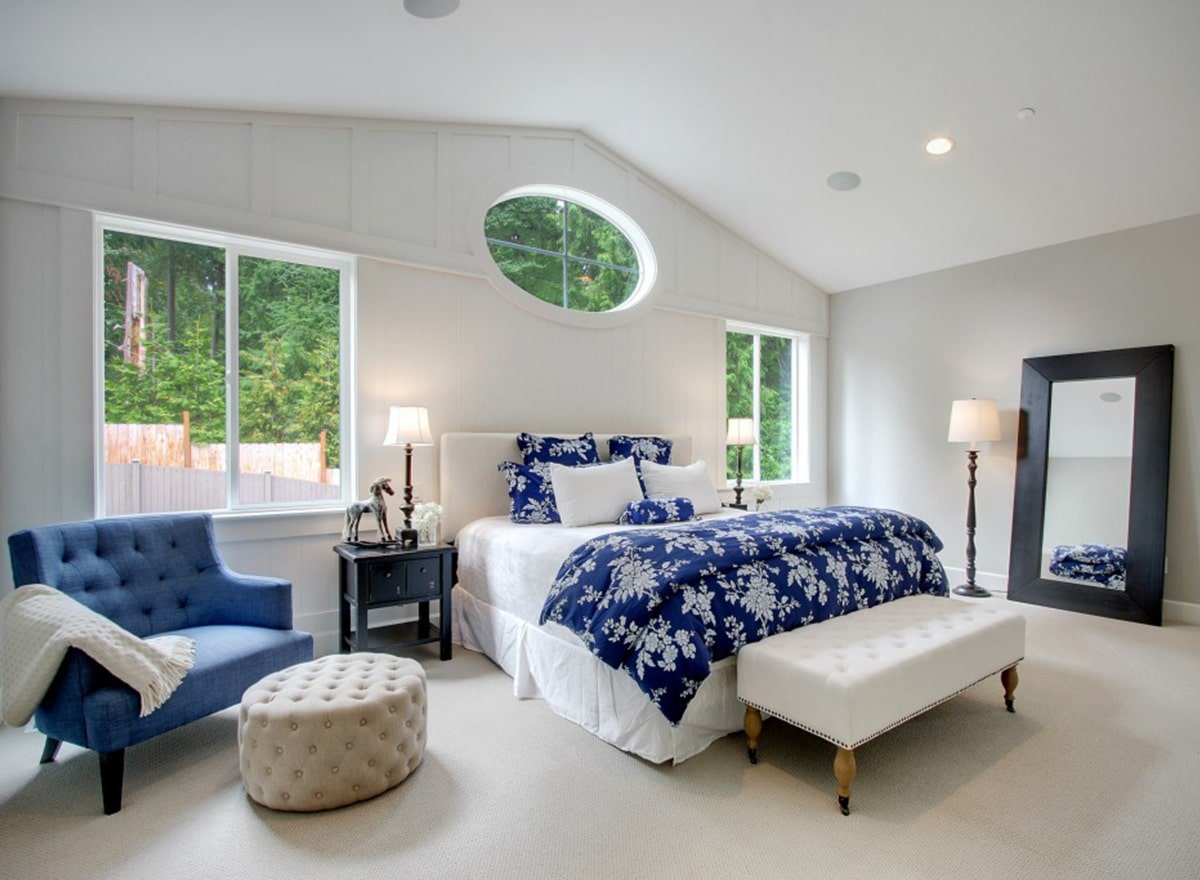 The primary bedroom has a white skirted bed, comfy tufted seats, and a full-length mirror. These are then complemented by the white walls, multiple windows, arched white ceiling and beige carpeting of the floor. 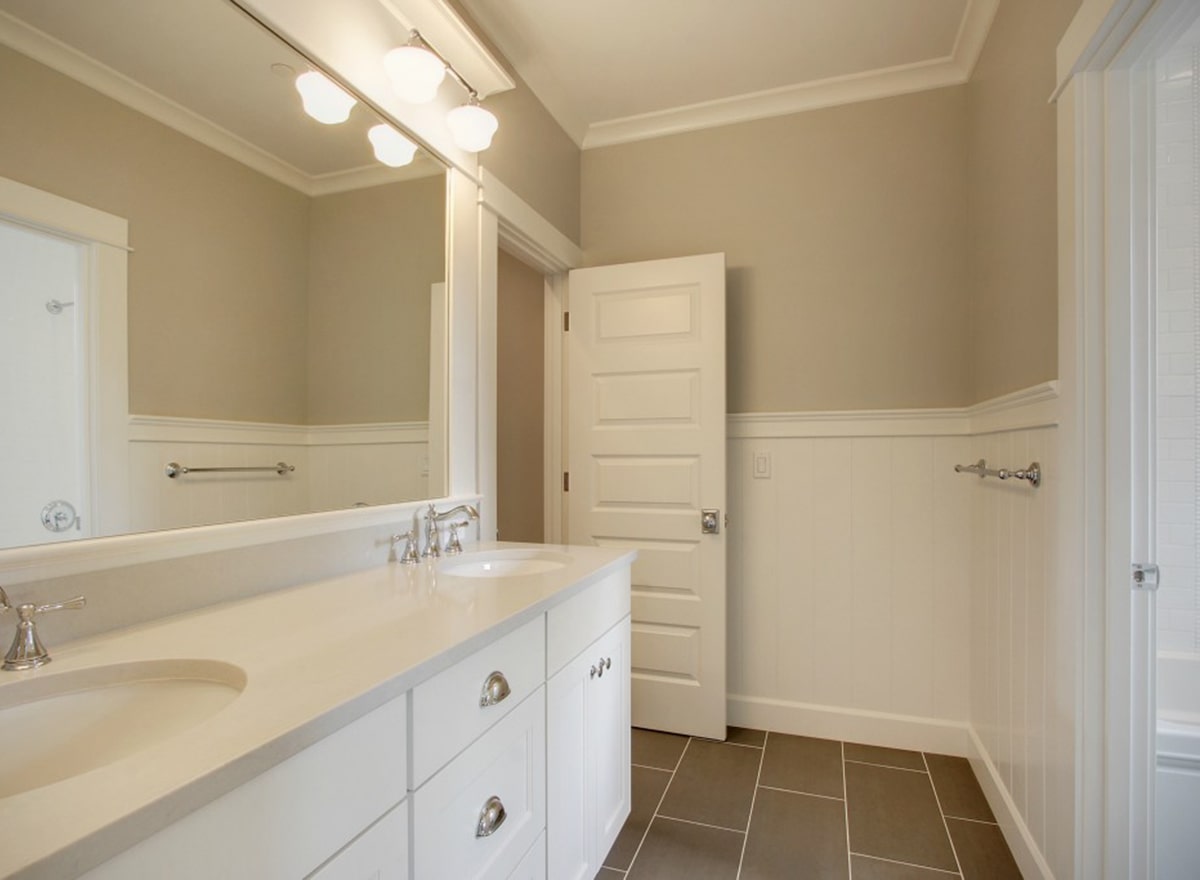 This is a close look at the primary bathroom with white modern cabinets and drawers on its two-sink vanity topped with a large mirror and sets of wall sconces across from the shower area. These are then complemented by the white wainscoting and gray flooring tiles. 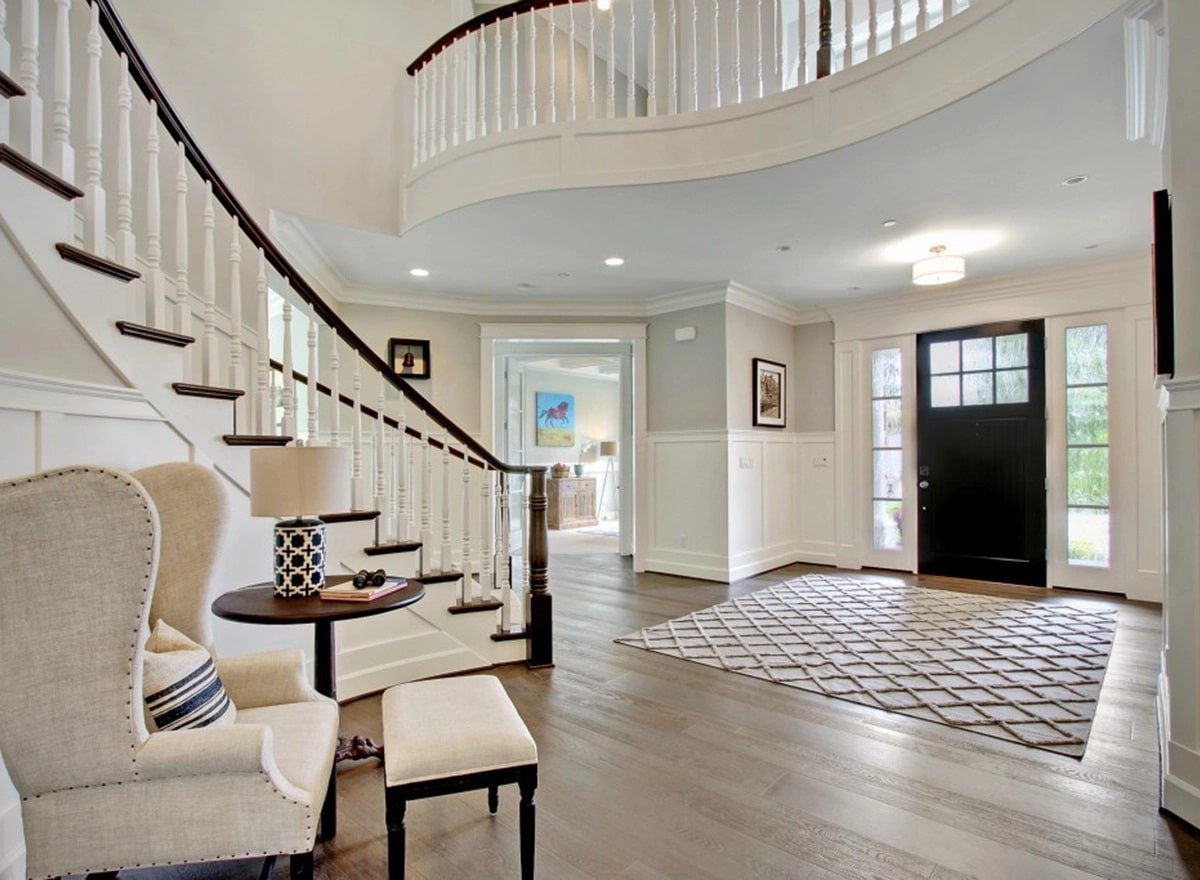 Upon entry into the house, this foyer welcomes you with a textured area rug on the hardwood flooring topped with a semi-flush drum lighting that brightens the white wainscoting and white door frame contrasted by the black main door. 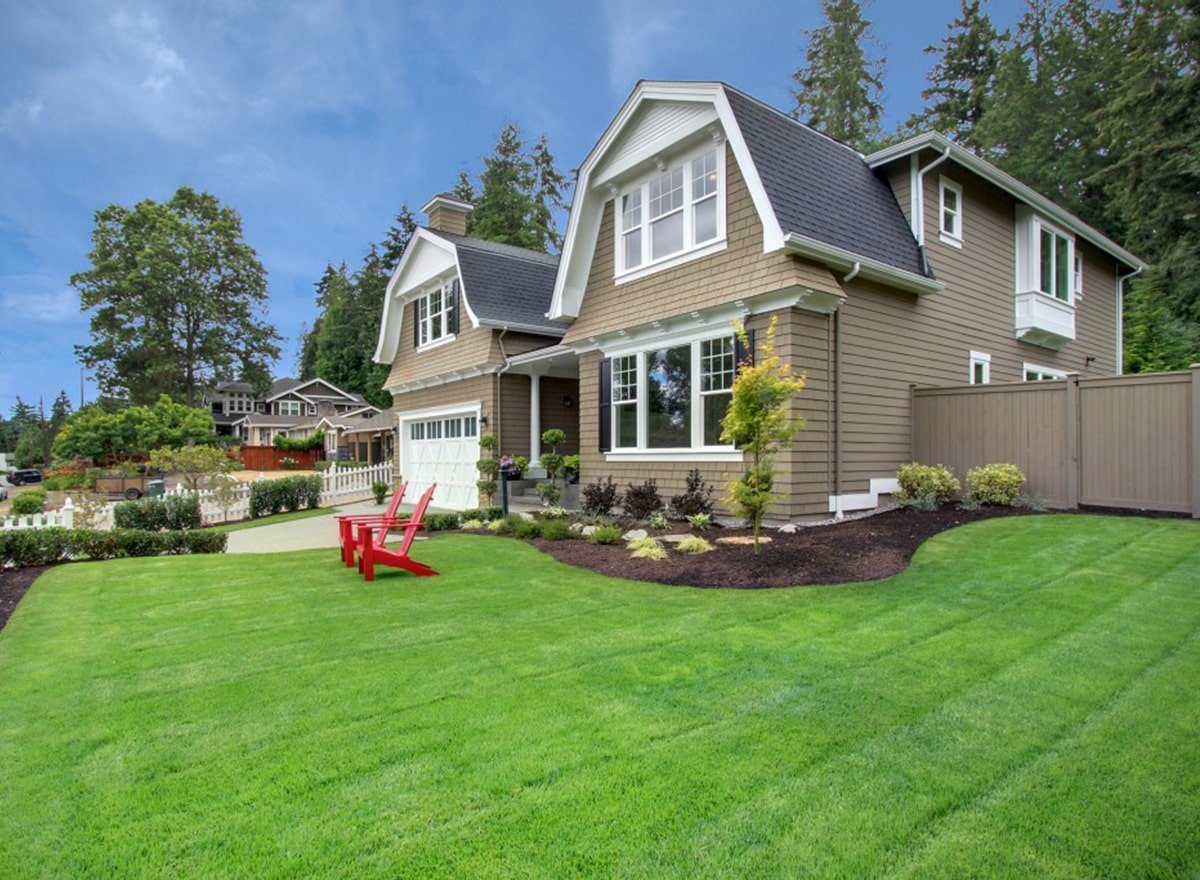 This is a close look at the front lawn of the house that has gambrel roofs and beige exterior walls. These are complemented by the landscaping of grass lawns, a concrete driveway, and lines of well-manicured shrubs.

What is Shingle Home Style?

Shingle Style home design tends to be one of the top three true American home construction designs dating back to the 1800s, and it represents an evolution from the original architecture much of the colonial American cities brought over from England as communities and building styles adapted to American materials, conditions, climate and far more ample space available in terms of land.

The style started to become very prominent towards the later 1800s, noting a significant shift from earlier Victorian rigidity still followed per European standards. It provides a combination of rustic rural sensibility as well as significant living space and functionality overall. And, more importantly, the building style fits the rugged environment and climates of rural American, able to withstand decades of use without issue. 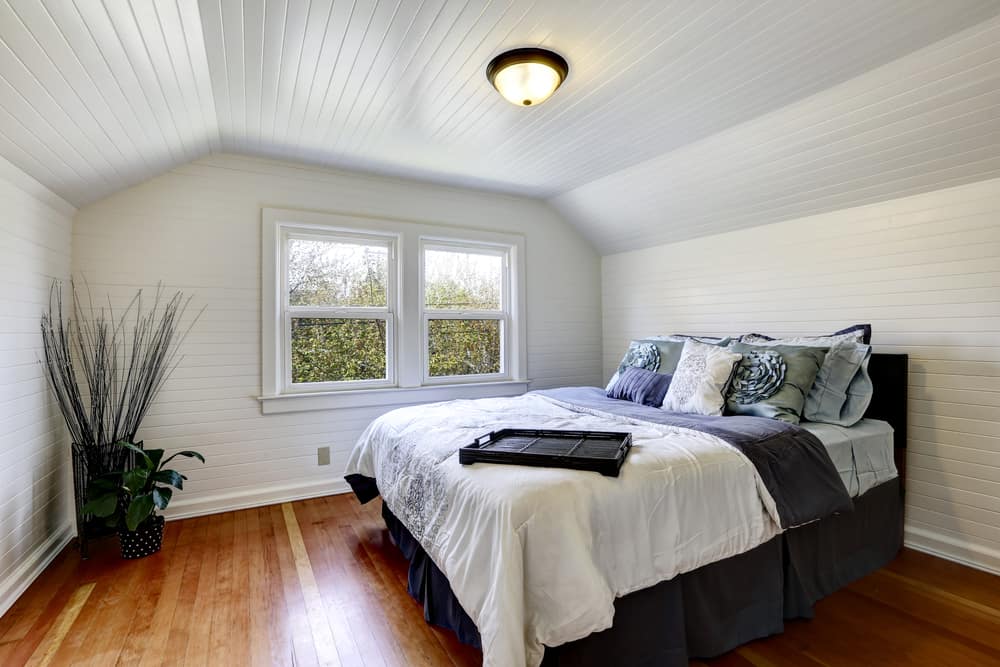 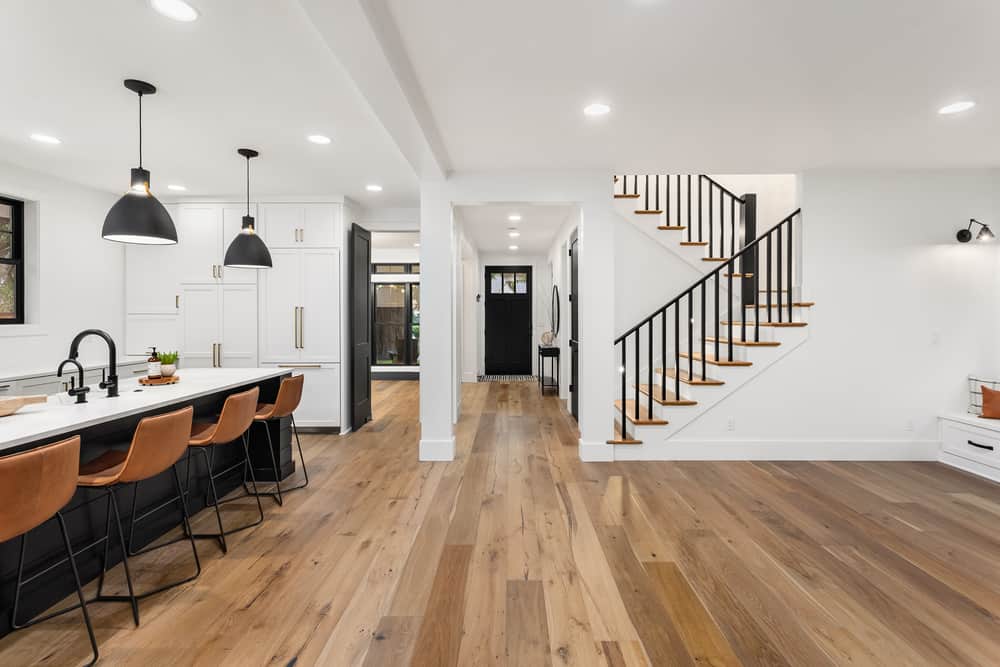 Just about anything classic Americana is going to fit well with the Shingle-style home. Many of the homes in the 1800s utilized prior Colonial and French furniture, so there was a lot of mixture of earlier antiques with later Shingle design as the style became more and more popular. 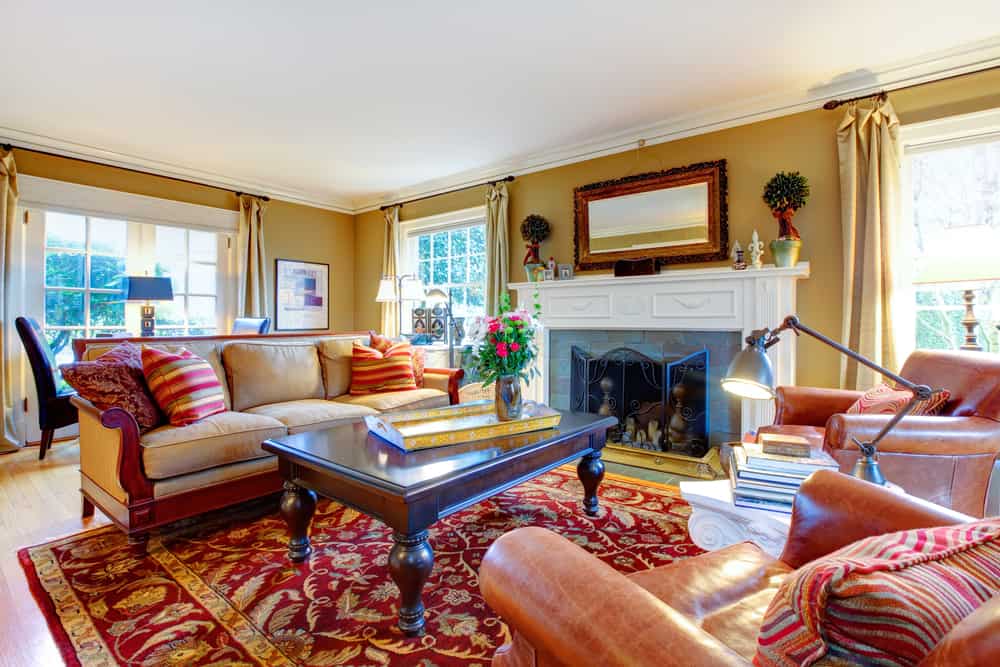 Given how much effort went into furniture, it was rarely given up, instead passed down from generation to generation unless broken and not repairable. So many Shingle homes today tend to reflect a good number of Classic American style interiors and furniture choices as a result, emulating the original blend.

The primary catalyst starting the Shingle Homestyle occurred with a push away from the traditional Victorian standards in buildings that were a well-known pattern up to the 1870s. While the Shingle home might seem like construction from an earlier Colonial period, the style really began to be established between 1874 and 1910 as many families went about rebuilding older homes and moving to new locations.

Most of the original homes were contracted for by wealthy businessmen and families in partnership with a specific architect famous for new designs.

By the 1920s the style was exiting desired builds and began to fade from demand. That said, after the World Wars and a re-focus back into normal life, the Shingle style began to show up again in experiments and retro architecture. 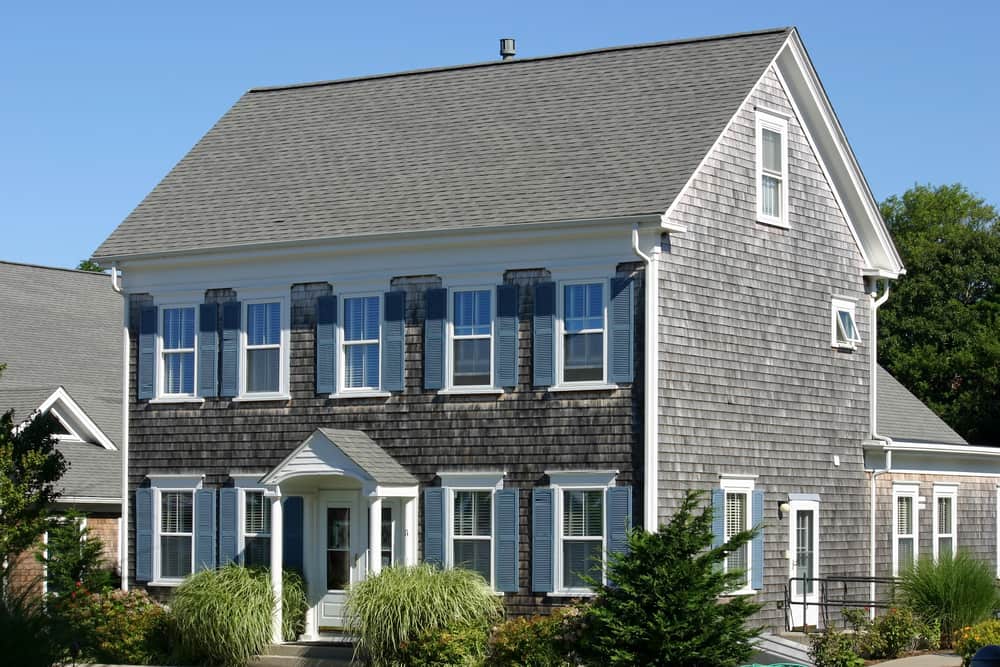 Many architects began to play with the approach when orders looked for something “classic” and a good number of new buildings at tourism sites or congregational organizations reflected the Shingle style in new builds. One of the most prominent today includes the Disney World Yacht Club building.

Some would refer to Shingle homes on the East coast as simple fisherman homes, but that was very far from the truth. Most common fishermen could not afford these homes, and they provided a subtle but deceptive getaway location for the wealthier class, often being used as vacation homes during the summer.

Even in modern times, the Shingle home-style gained prominence with George Bush, Sr.’s summer home in Kennebunkport, MN. That particular property not only regularly hosted the Bush family, but it was also the location of many private meetings with the President and world leaders at the time.

Why it Looks Great 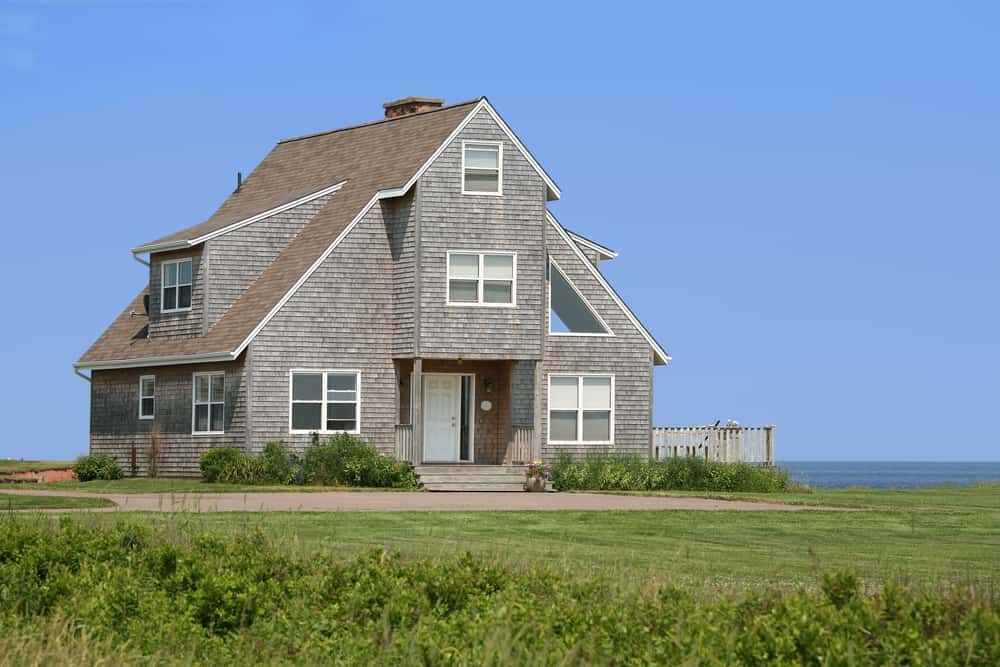 If one was to claim they lived in a museum of Classic American architecture, then the Shingle home would definitely qualify. The build, workmanship, and style evoke a summary of 1800s American residential architecture that became a distinct design discipline all its own, and very different from what had been expected from Victorian and European standards just prior.

Because so many prominent architects were involved in building unique Shingle homes from the late 1870s to the 20th century, the design has definitely placed itself in the architectural history books and is still studied today as a specific American building approach. It helped a lot that most of the homes were financed by very wealthy patrons and owners who could afford the significant amount of work that went into each home.

Home Expert
Hello, how are you? Ask me anything about interior design, home improvement, home decor, real estate, gardening and furniture.