The palatial estate once owned by Ronald Regan and Jane Wyman is on the market for $6.75 million. With its spiral staircase and beautiful views, it was born to be a star, just like its former owners.Step back in time for a glimpse of Old Hollywood with this mansion in Little Holmby 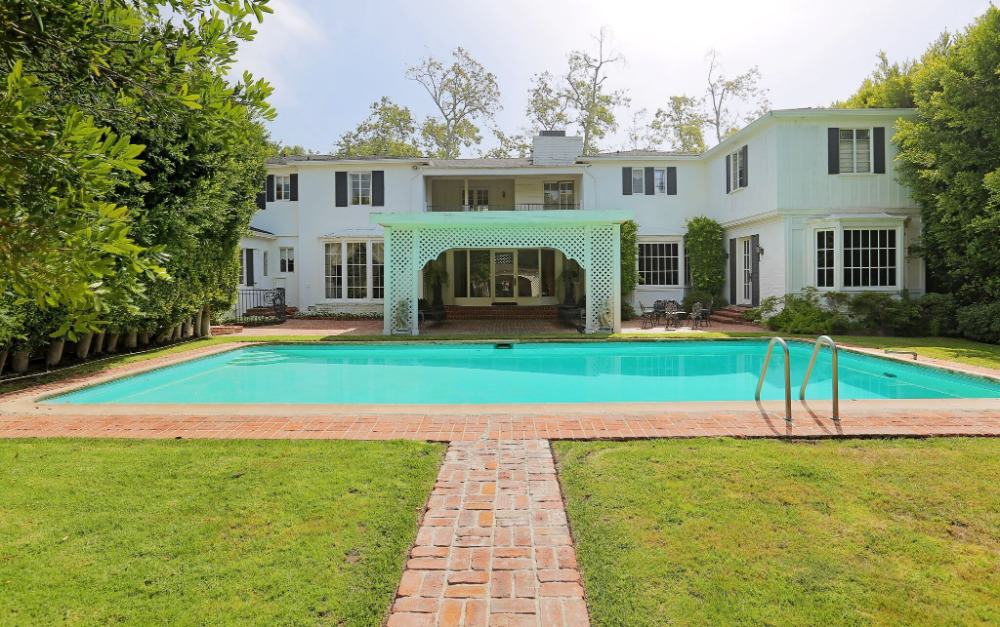 The L.A. mansion where former president Ronald Reagan and his first wife Jane Wyman once resided is now on the market. The 6,153 sq ft estate is for sale for $6.75 million. It exudes the glamour of old Hollywood, retaining much of its original charm over 80 years after it’s construction.

The mansion is known as the Shuwarger House. It’s built in the Georgian Colonial Revival style. The whitewashed brick exterior is understated, allowing the eye to notice the symmetry and mature shrubbery around the home. The second floor features a recessed balcony, which adds interest to the facade.

The interior of the home is luxurious and impressive. Every aspect functions as a status symbol, with a glamorous feel that is strongly stated but not overwhelming. The floors are original. Some areas have inlaid oak while others have oak planks. The foyer sets the tone for the mansion. The room itself is oval, with inlaid oak flooring, a grand chandelier, and a signature spiral staircase with wrought iron railing.

The home includes a formal dining room, a cozy family room with a bar and fireplace, and a large reception hall with a sunroom, making it perfect for intimate gatherings as well as large formal events. The home has 5 bedrooms, each with its own theme, and 7 bathrooms. The primary bedroom encompasses half of the second floor and includes 3 ensuite rooms as well as an indulgent ensuite bathroom.

The palatial estate grounds were designed with refinement and pleasure in mind. The back rooms offer a great view of the large in-ground pool, with a door that leads to the covered brick courtyard. The mature trees surrounding the estate create a secluded paradise, along with the cabana, and fire pits.

The palatial estate was built in 1938 by renowned architect Paul Wyman. Today it remains much as it was then, with the original architecture completely intact. The large open rooms, high ceilings, crown molding, and opulent decor have a charm that remains 80 years after its construction. Shuwarger’s house is like a window back in time. If you’ve ever watched a black and white film and dreamed of stepping into their world, this is the place to do it. Every aspect of the mansion is reminiscent of the glitz and glam of old Hollywood.

It’s a story straight out of Hollywood. Ronald Regan is well known as the 40th President of the United States. However, before he was President, he was a star. His first starring role was Brother Rat, and Jane Wyman was his co-star. They married in 1940 and moved into the Shuwarger House.

Divorce rumors were circulating as early as 1943, and Jane filed for divorce in 1948. Ronald Regan was the only divorced president until Donald Trump was elected. Jane kept the  Shuwarger house, where she resided until 1954.