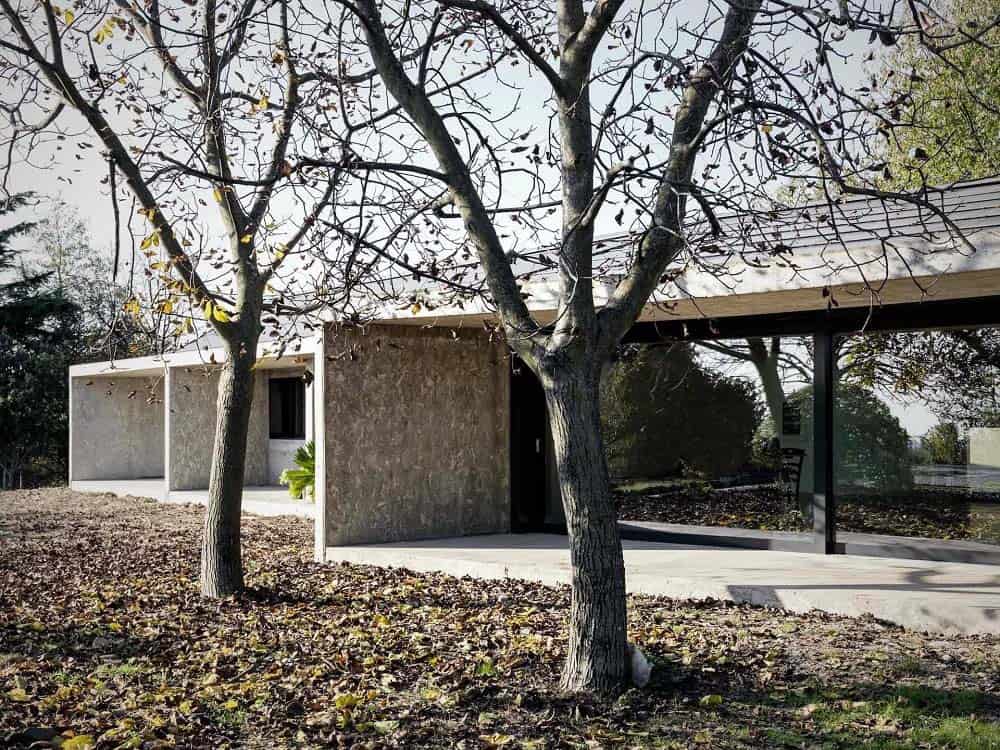 Bressanella Agricultural Pavilion is located in Besana, in Brianza, which is one of the most densely populated areas in Italy and Europe, where land has been consumed for commercial and residential uses at sky-high rates. In this context, a small farm has yet decided to bet on sustainable and ethical values, against mainstream trends being part of the Short Food Supply Chain thus enabling a closer relationship between producers and consumers. Therefore the key concepts of the project are state-of-the-art technology, sustainability, and a “short” production-consumption configuration.

The pavilion has a simple architectural shape, in which two volumes slightly rotated between them follow the natural configuration of the land, supported by a basement that also acts as an “edge” for the rear slope. Water and sunlight are the main elements that trigger the whole process of sustainability. Water on one side feeds the fields; organic fruit and vegetables are grown, harvested, and then sold to the customers. Sunlight on the other side feeds the technological plant of the farm enabling the energy efficiency of the pavilion.

The building’s north-south orientation provides an opportunity to maximize solar gain during the winter months and minimize the solar gain during the summer months. This can keep an adequate microclimate according to the seasonal temperatures, optimizing energy consumption for heating and cooling. The pavilion is equipped with a heat pump and a photovoltaic system. Rainwater is channeled into two storage tanks and used for irrigation of the fields.

The project rationally uses simple materials such as concrete, wood, and iron. The southern façade builds a light front with the rhythm given by the vaults of the reinforced concrete porticos. They are made with board-formed concrete. The textured concrete gets with this process reminds us of the irregular walls typical of peasant houses. Such texture shows light and shadow play depending on the irradiation and the reflected light.

The walls are made of Porotherm thermo bricks and lime-based rough plaster. The interior flooring was conceived in polished concrete in order to give a rural and simple perception. The whole building originates from the ground and there aren’t any other floored spaces all around the pavilion, as a result, the building and the surrounding nature maintain their connection. Each room is characterized by a wooden roof conceived as a large “hat” that builds and preserves the spaces below.

The first rectangular-shaped volume houses the shop with the cold storage room, alongside there’s a free space for a wide range of use, a double-facing room; through a large window, it is possible to perceive the cultivated fields southwards and the cherry and chestnut trees of the underlying wood northwards. The second volume houses all the service spaces, the toilets next to the multifunctional space, a small office, the processing room, and the changing rooms for the employees. 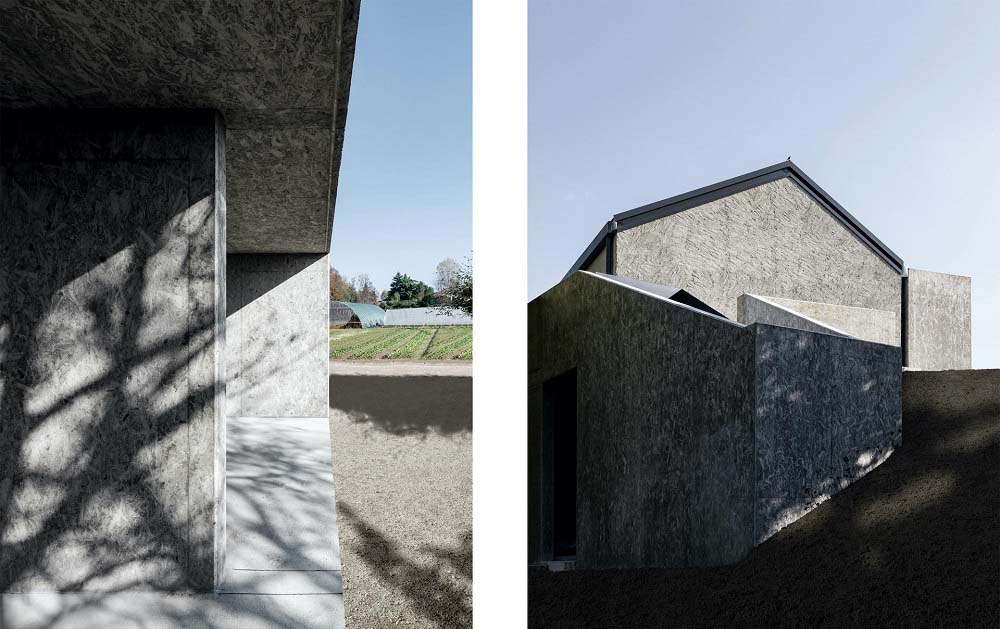 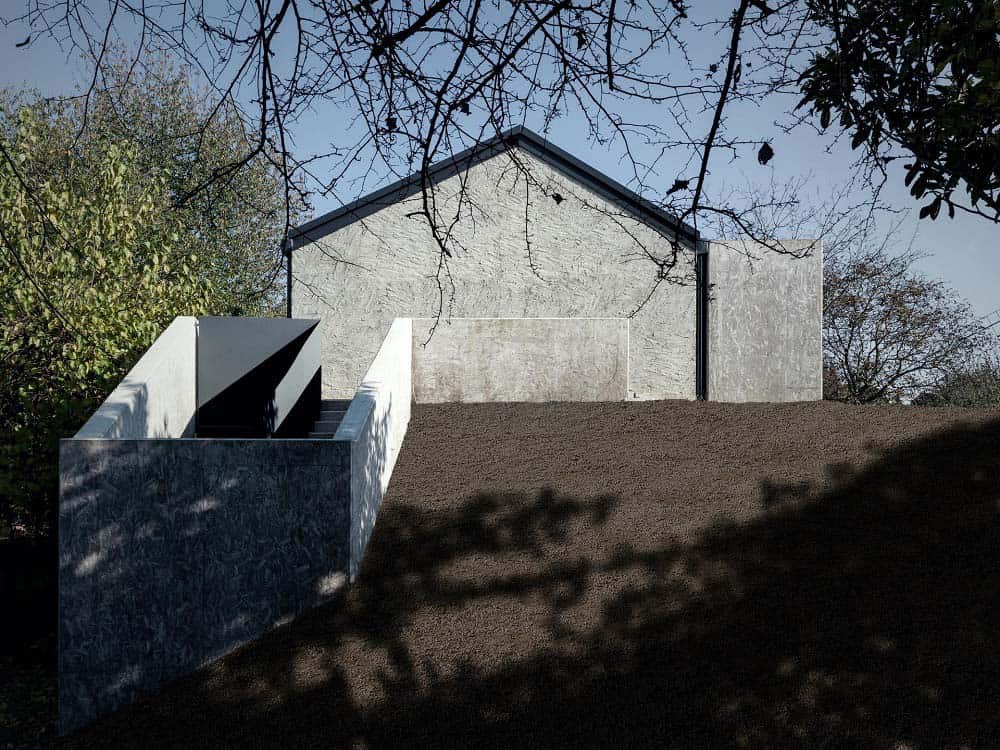 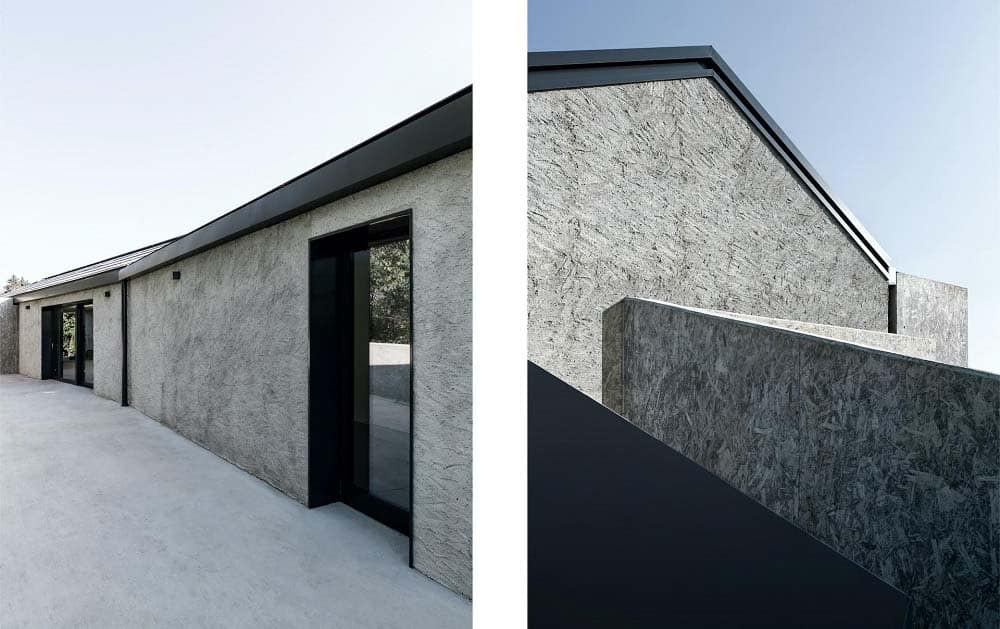 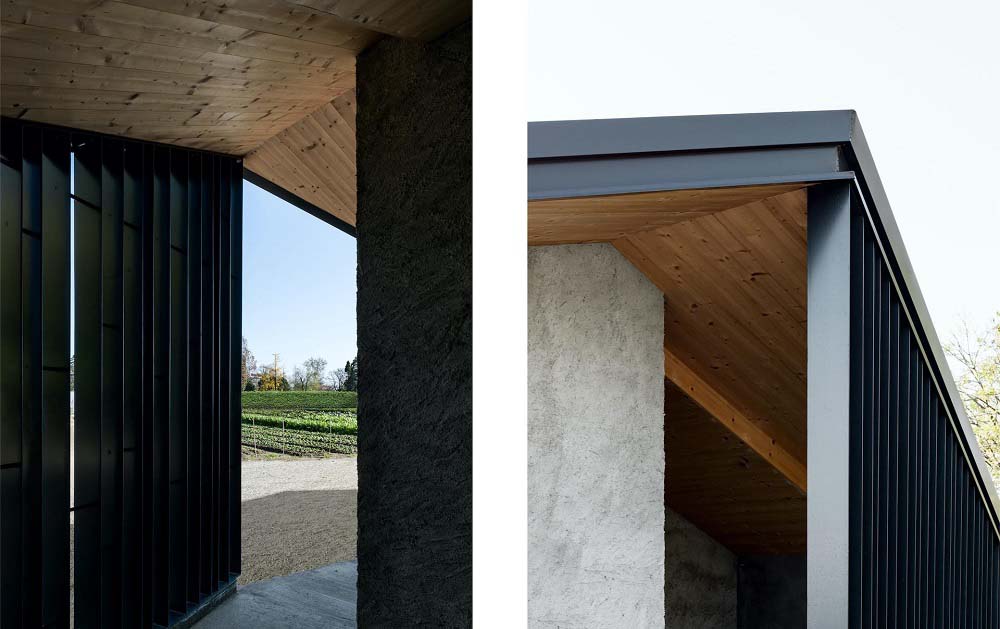 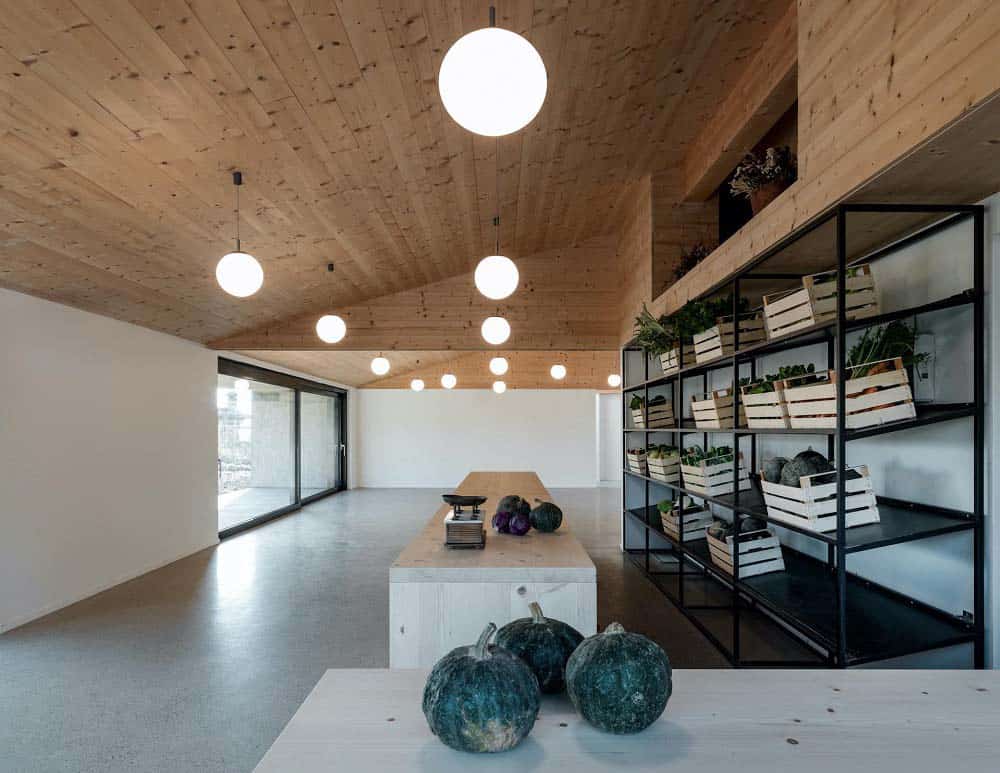 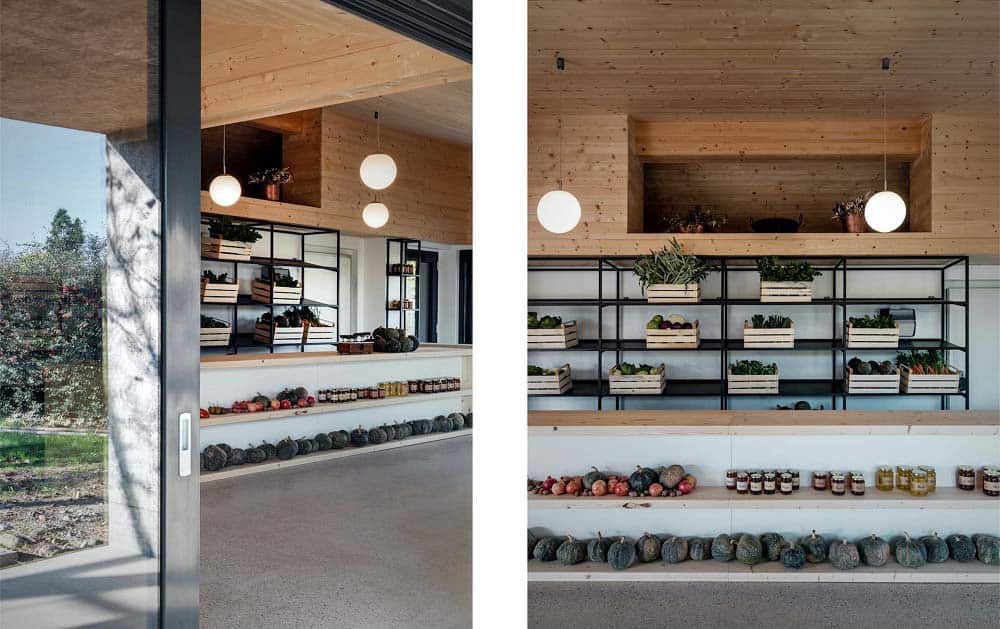 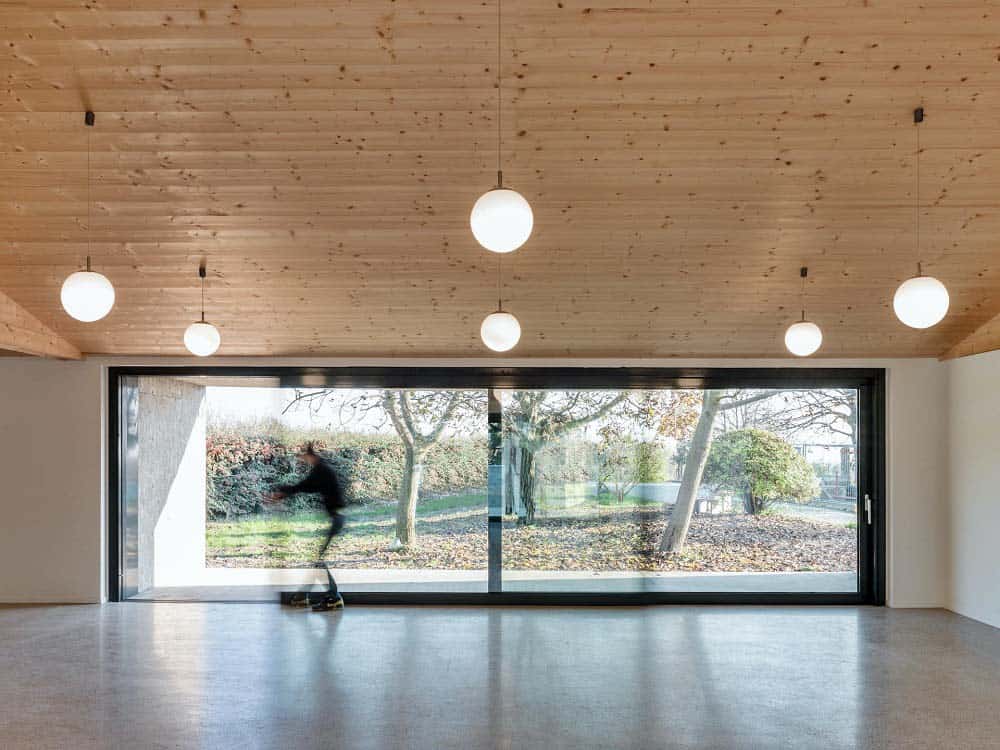 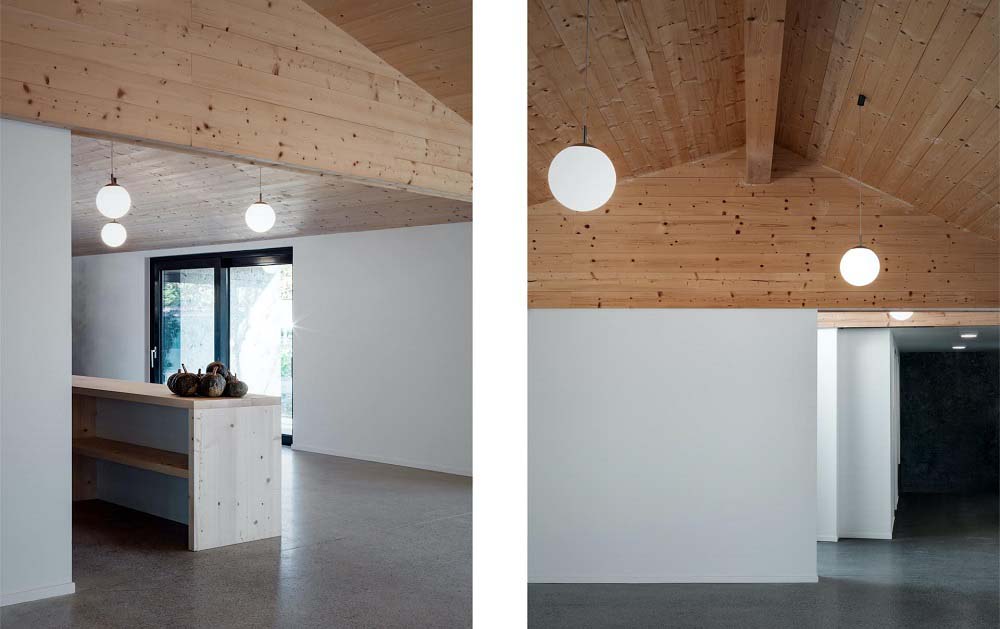 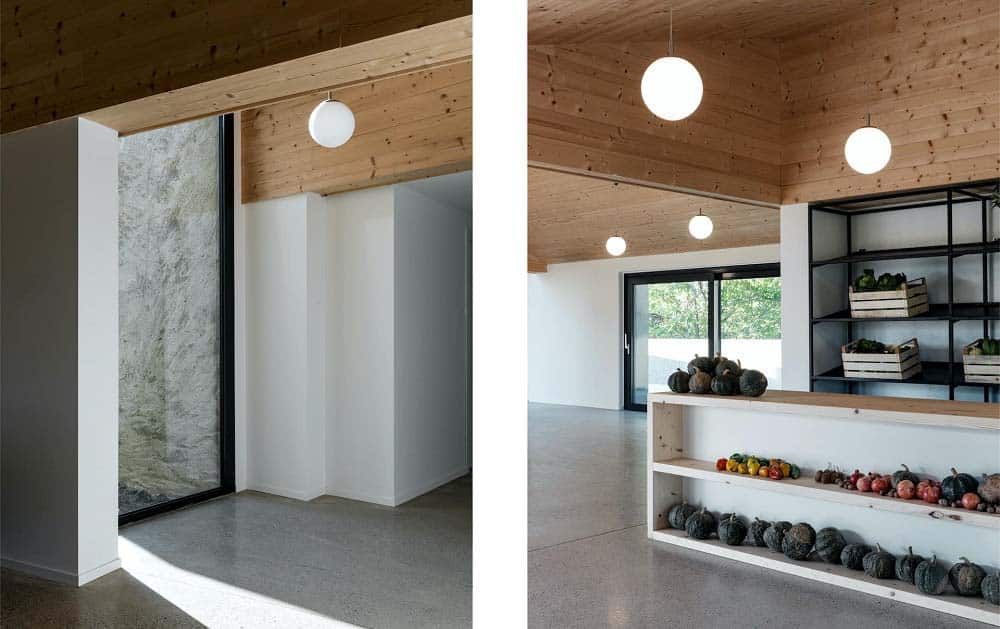 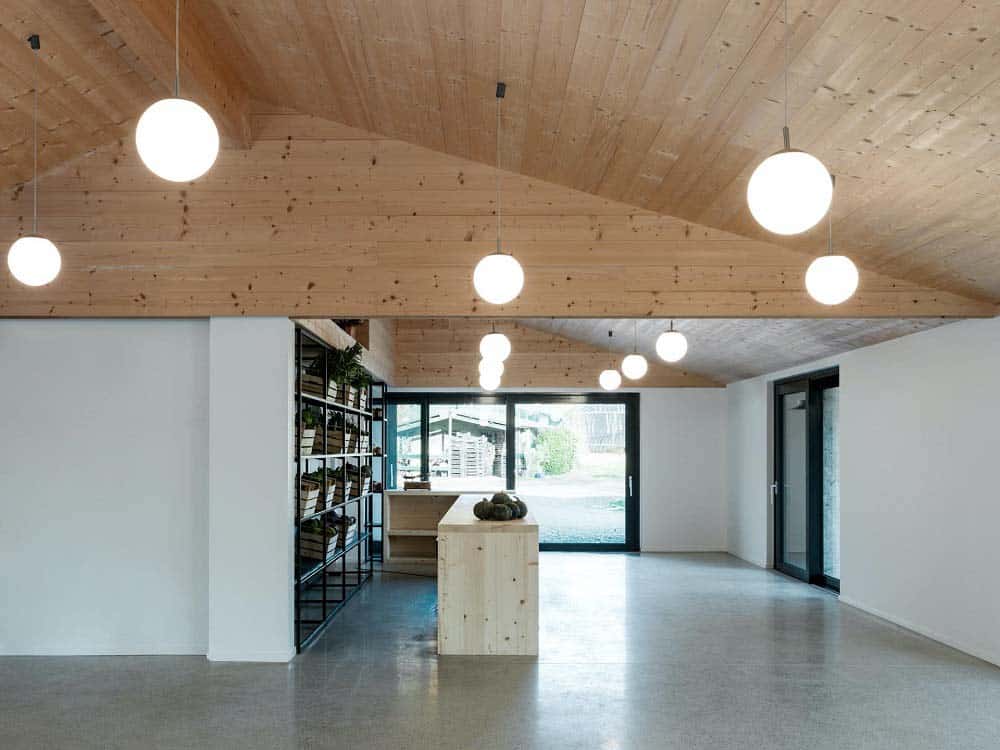 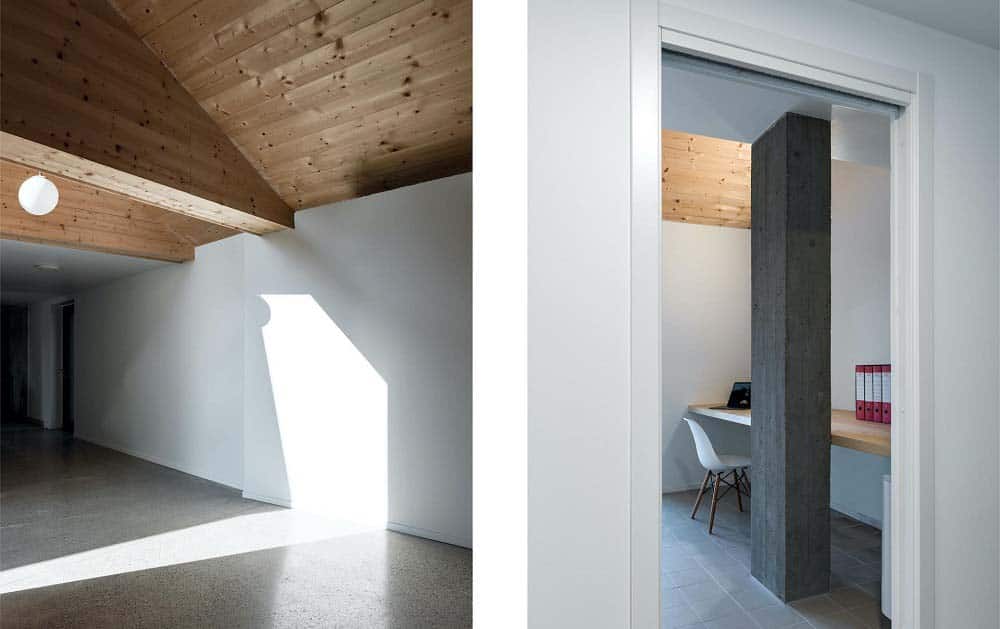 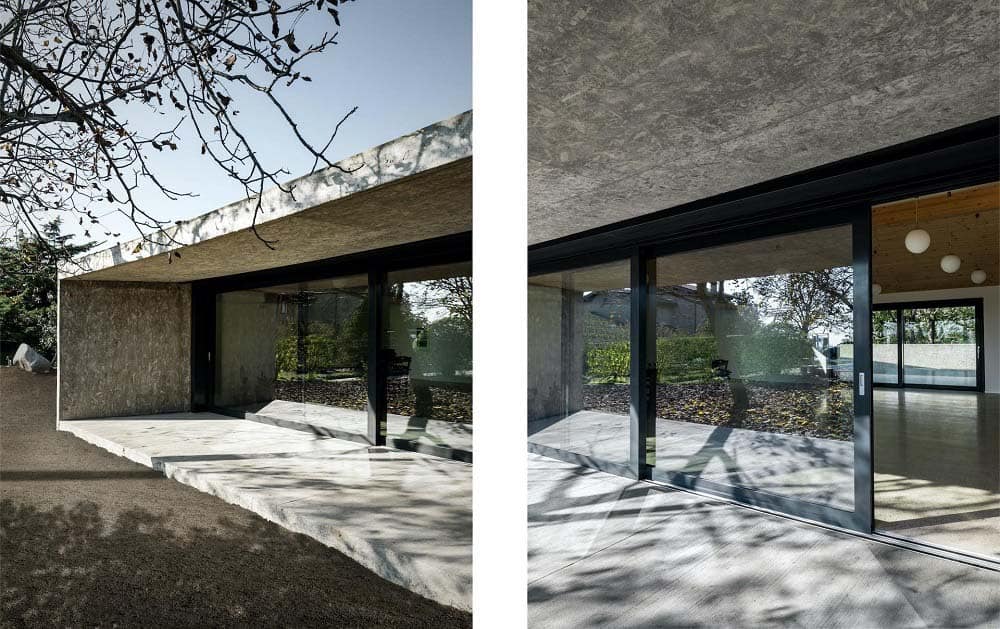 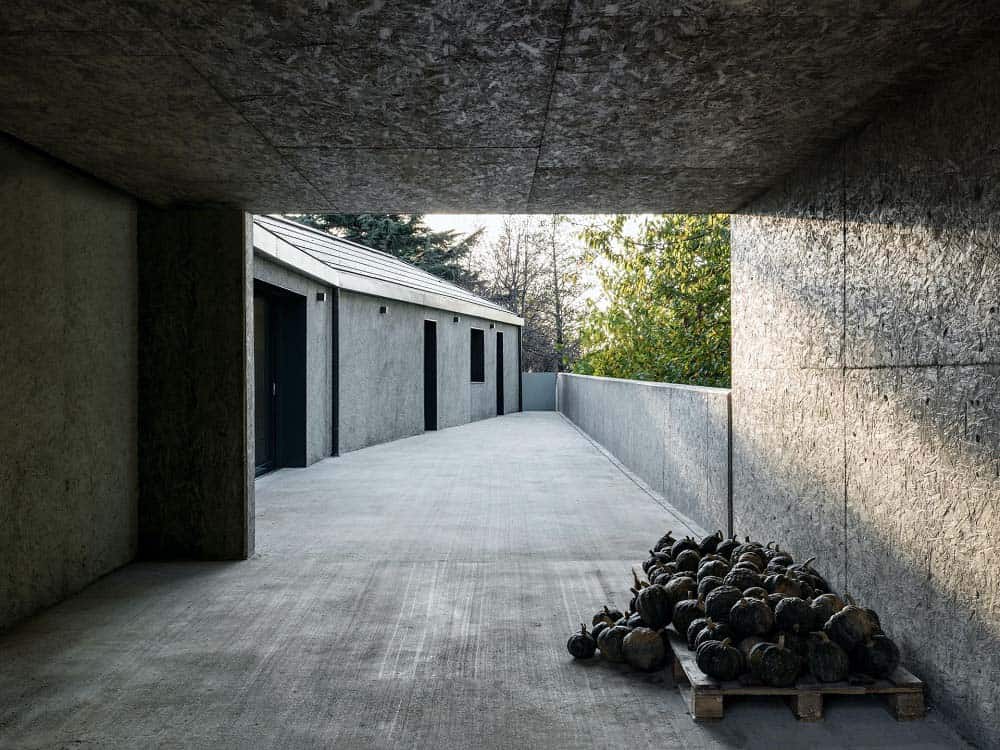 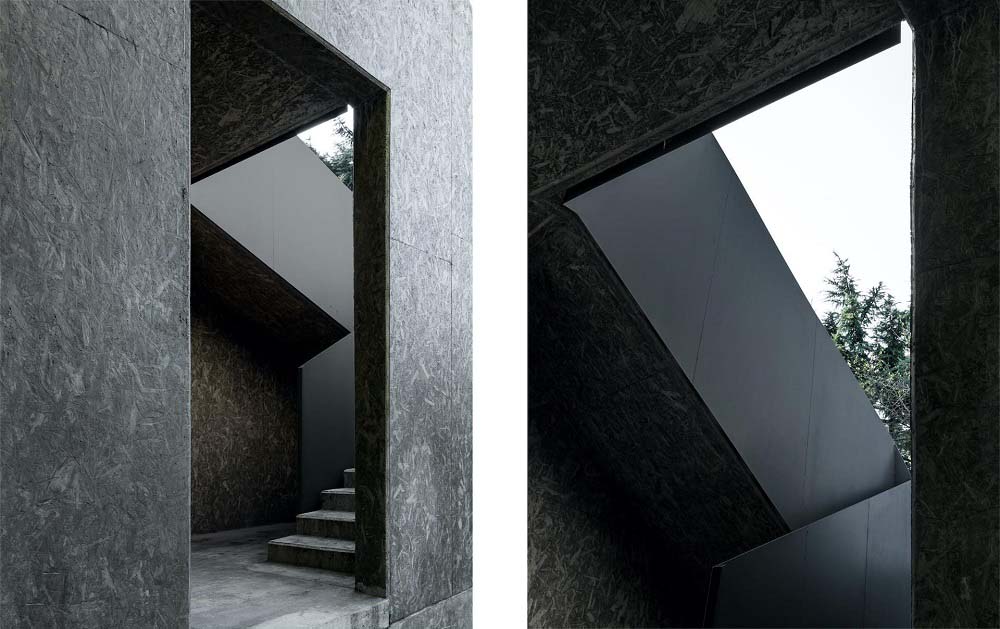 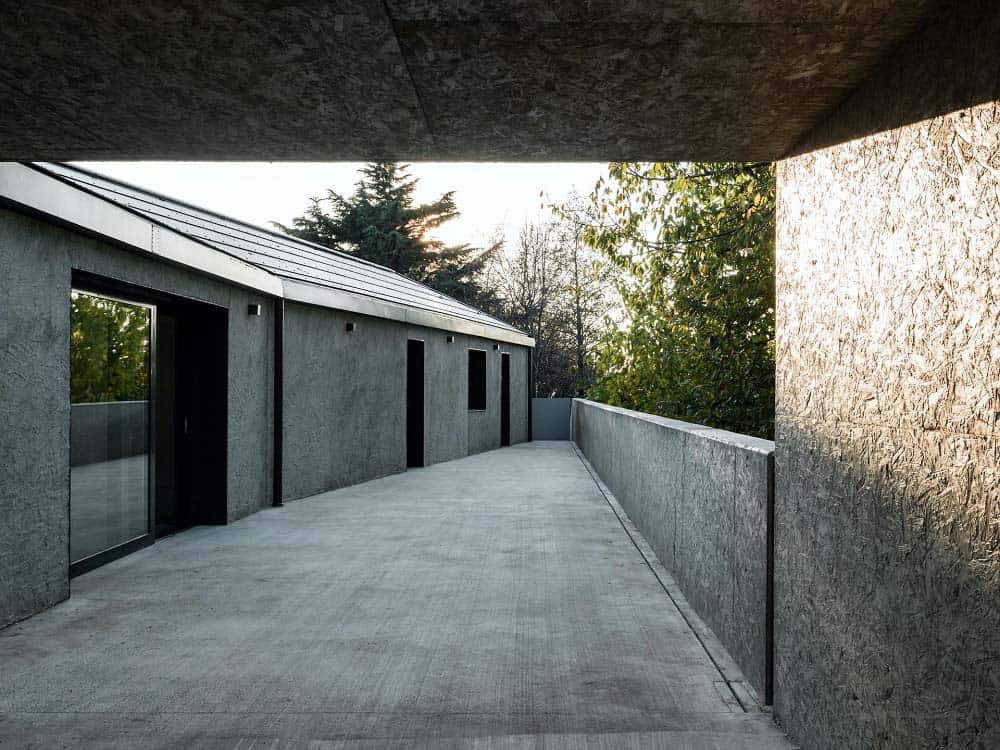 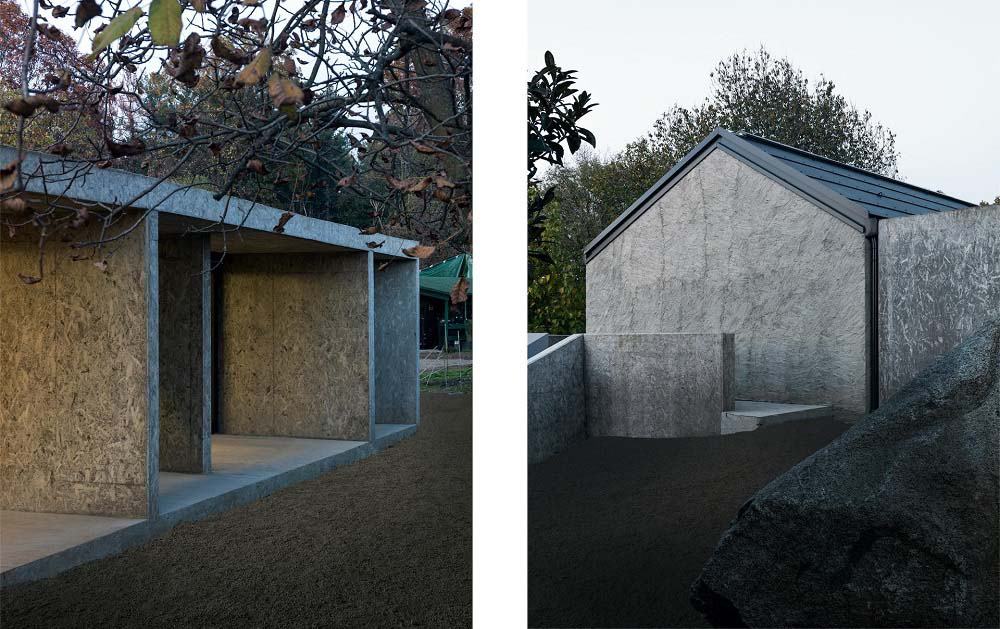 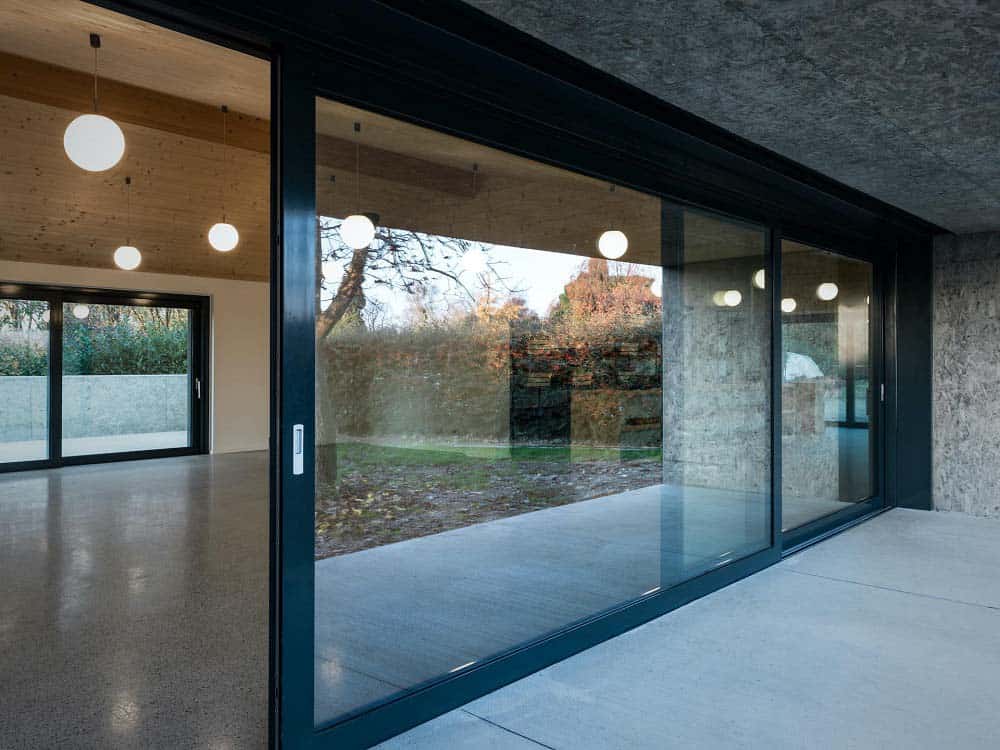 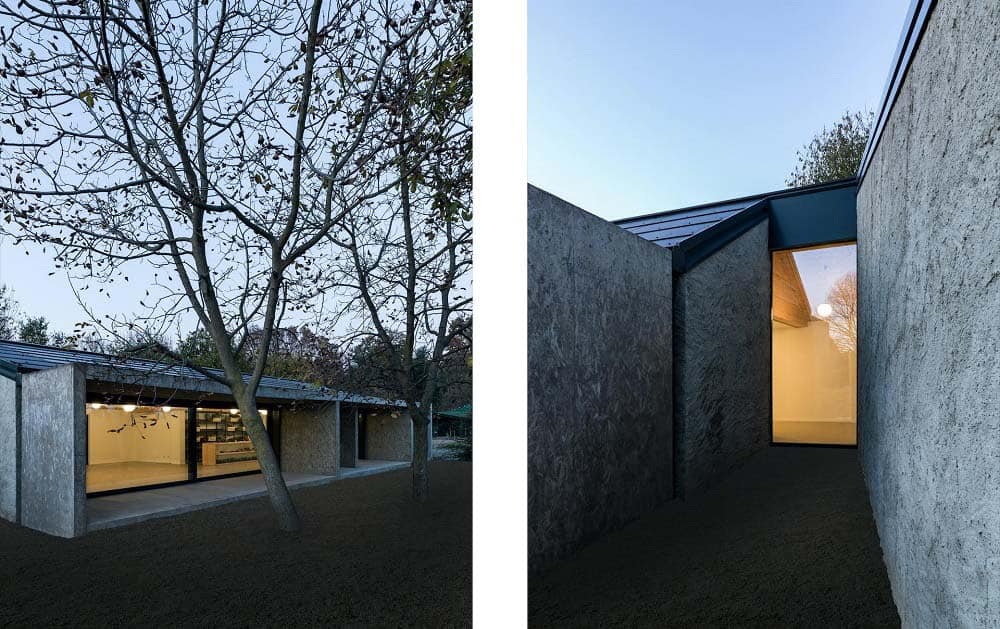 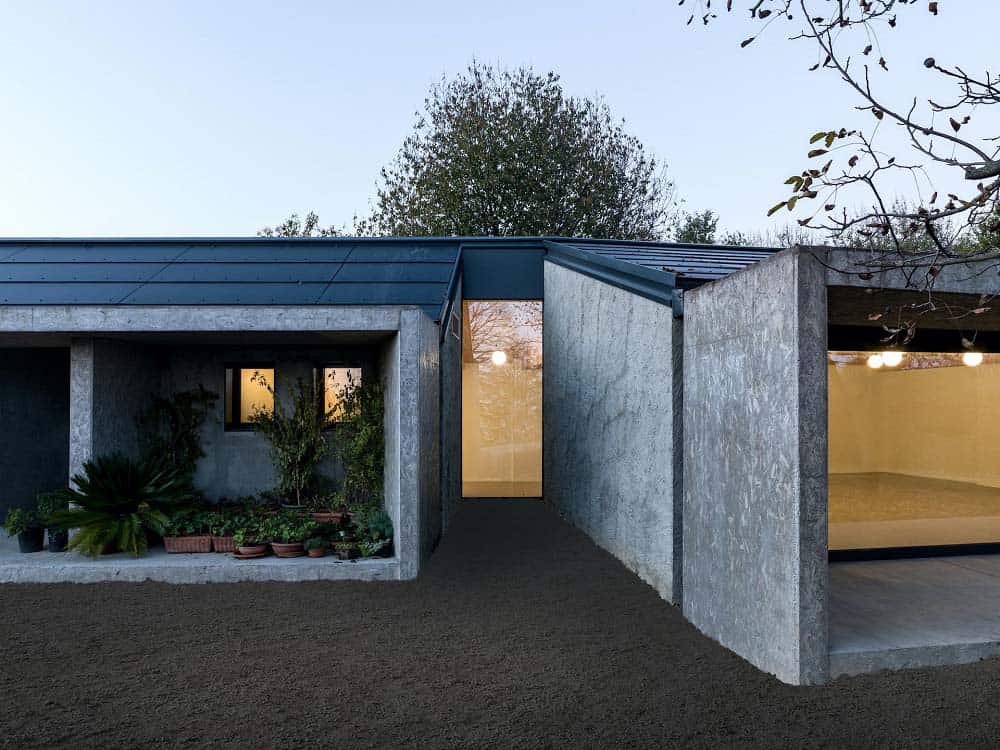 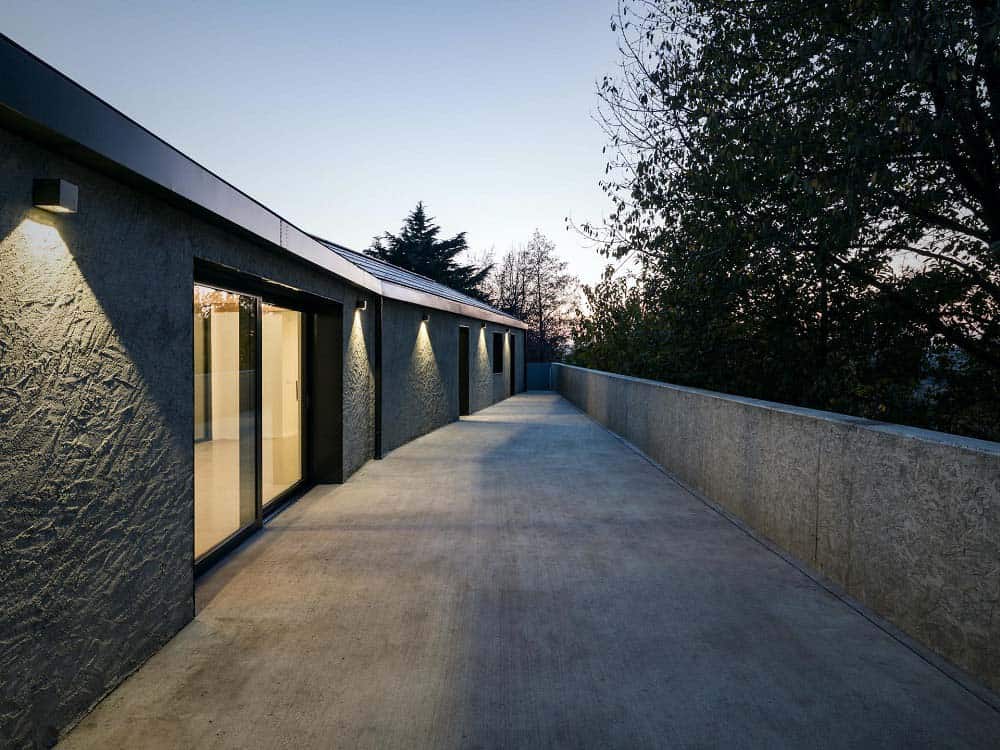 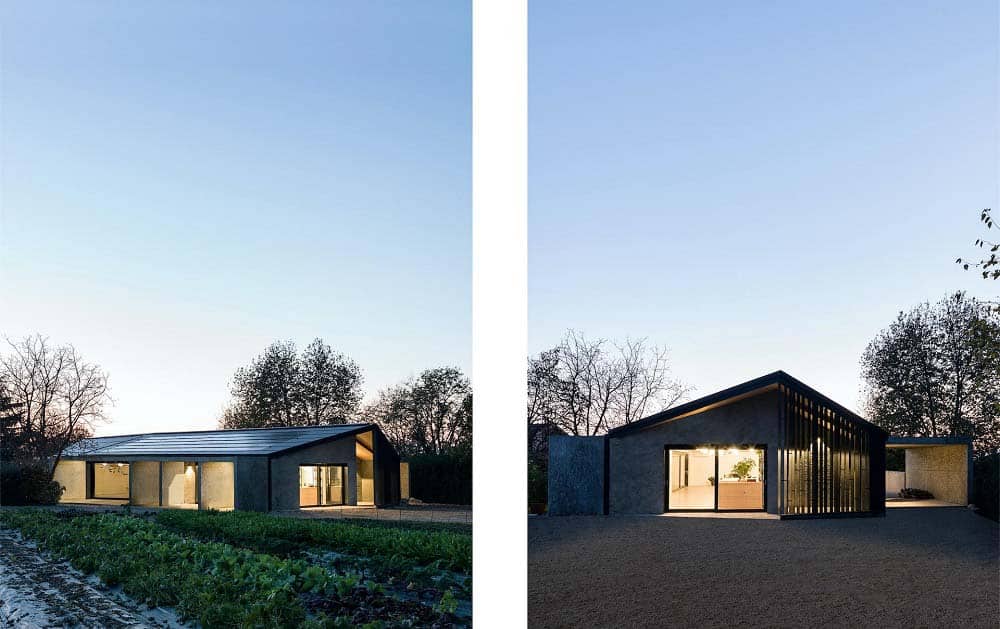 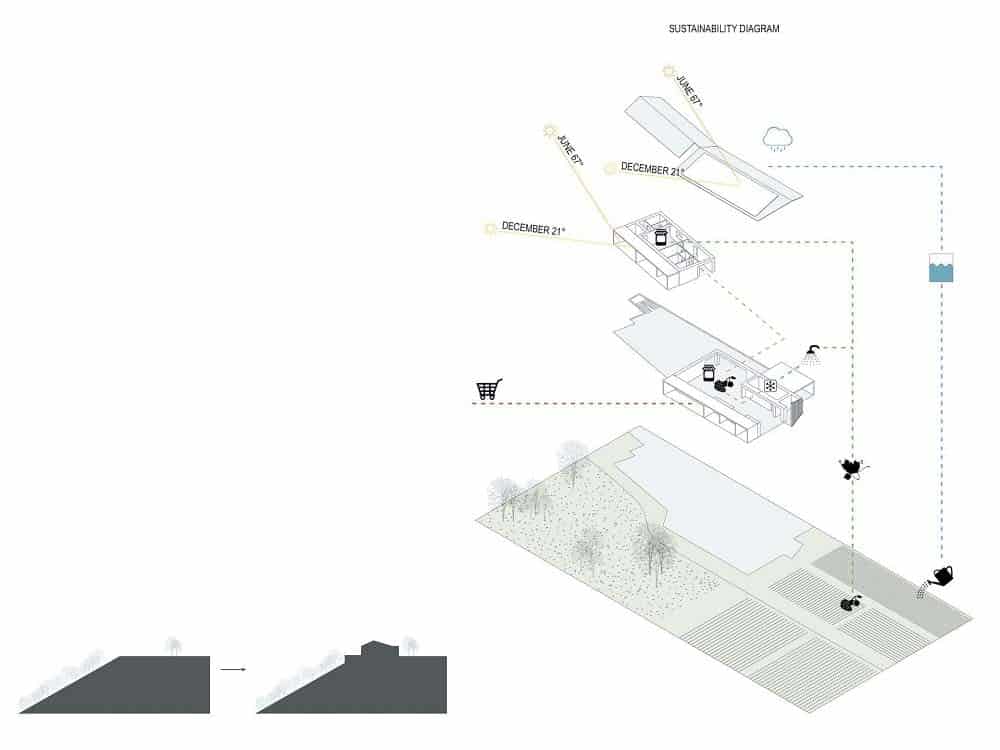 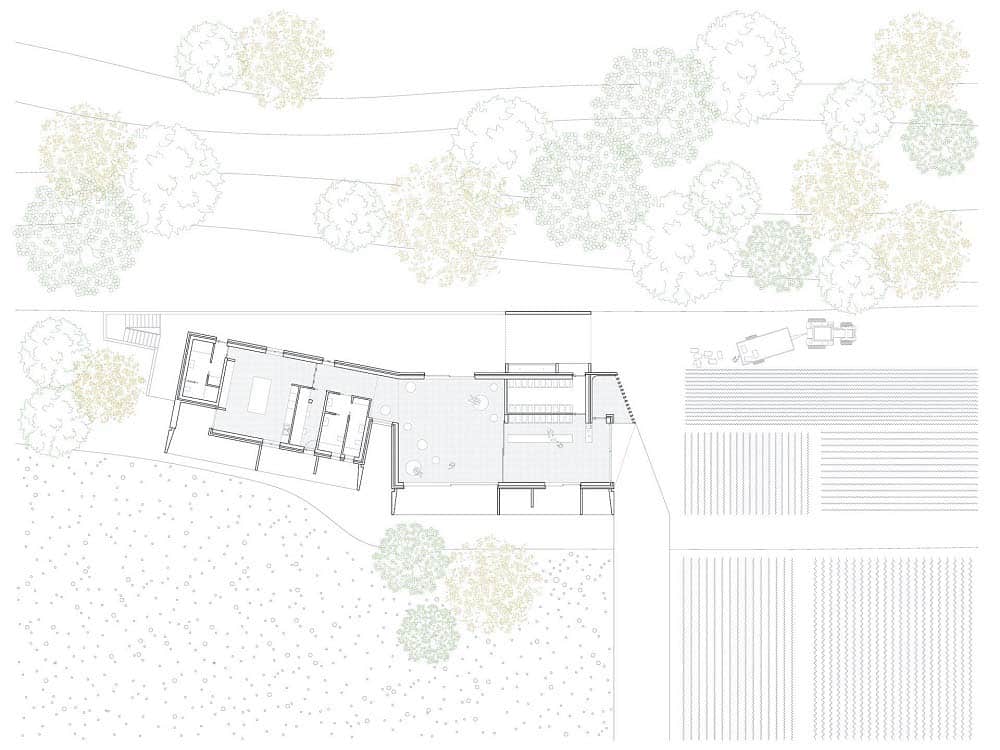 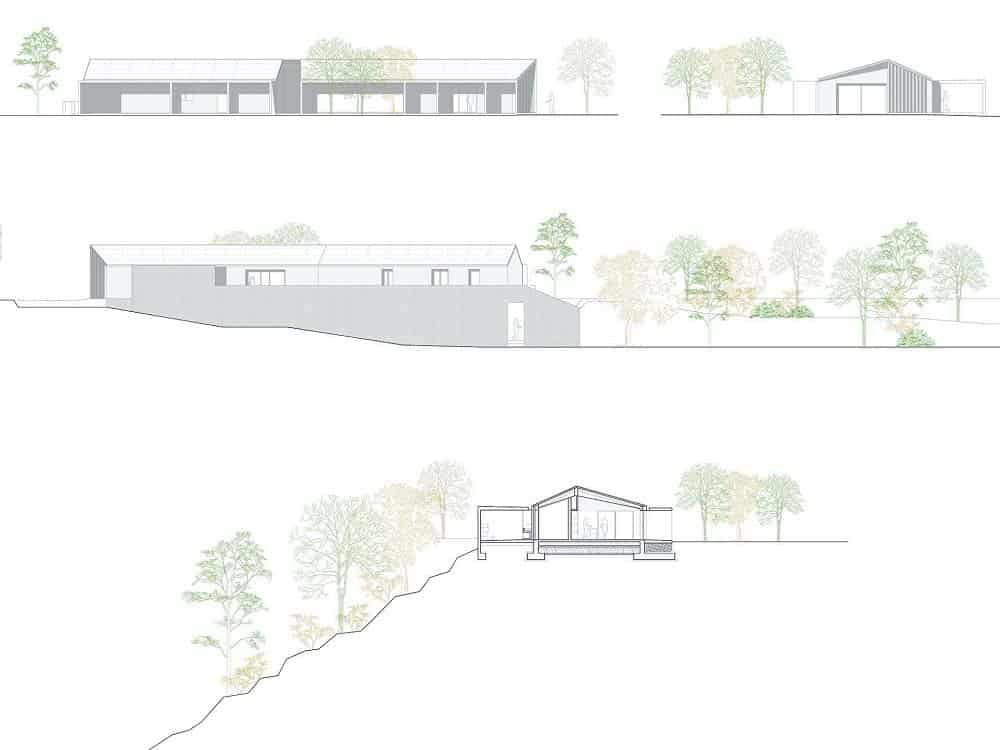 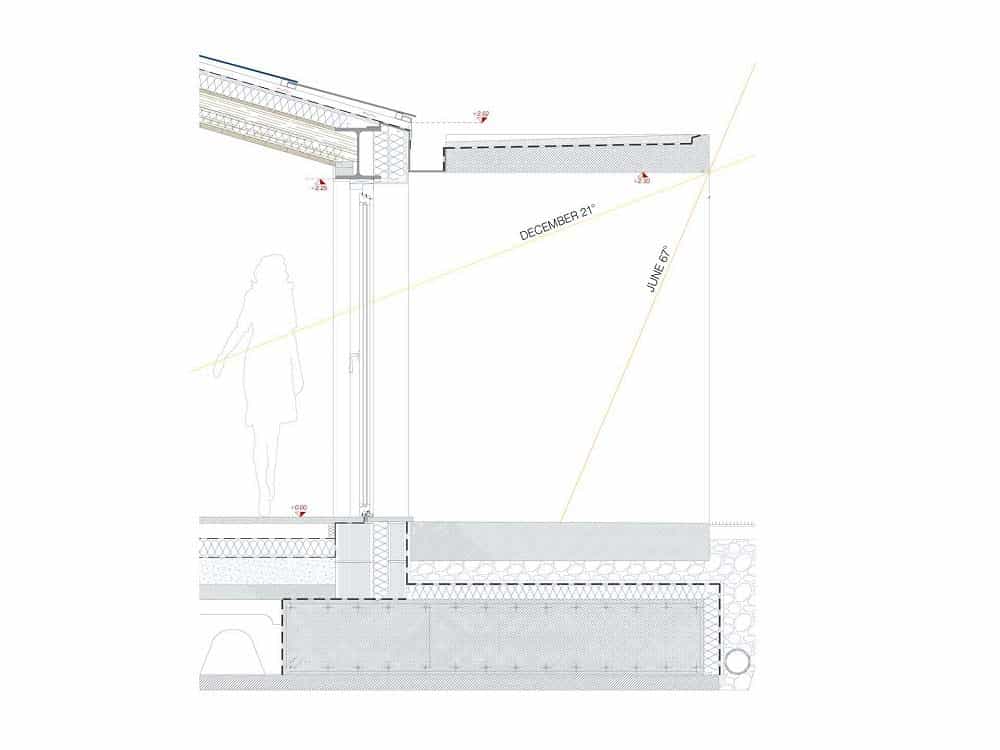