Built in 1927, Lauer's stunning pre-war apartment is a triple-mint condition with 11-room space located on one of the best tree-lined streets on Upper East Side of Manhattan. The home includes a bedroom wing with en-suite bathrooms. 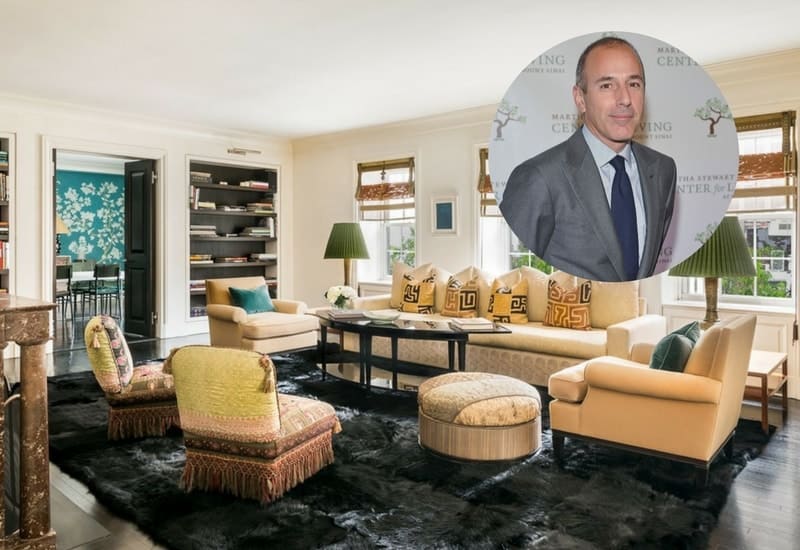 Matt Lauer was a longtime co-host of NBC’s ‘Today’, serving from 1997 until late 2017 when he was fired for inappropriate sexual behavior.

Lauer’s limelight started to shine brighter back in 1989 when he was hired as co-host for the live talk show 9 Broadway Plaza, making himself known as one of New York’s finest and most audience-friendly anchors. In 1994, he managed to nab a spot in the prestigious ‘Today’ show as news anchor and after 3 years, in 1997 he finally won a spot as co-host, succeeding Bryant Gumbel.

During his time with NBC news, he organized multiple high-profile interviews, sitting down with U.S. Presidents George W. Bush and Barack Obama. Additionally, he had a chance to interview Britain’s Prince William and Prince Harry. He also has contributed a popular segment titled, ‘Where in the World is Matt Lauer’, showing the World’s beauty such as India’s Taj Mahal and the Great Pyramids in Egypt. He also hosted a televised forum between Hillary Clinton and Donald Trump in 2016, who were the Presidential candidates at that time.

However, in 2017, Matt Lauer’s career eventually fell after an employee filed a sexual complaint happened in their workspace. According to reports, Lauer harassed three women in their workplace. One victim claimed that Lauer locked her in his office and sexually assaulted her, causing the victim to black out and needed medical assistance. Because of his inappropriate sexual behavior, NBC News fired Lauer.

Built in 1927, Lauer’s stunning pre-war apartment is a triple-mint condition with 11-room space located on one of the best tree-lined streets on Upper East Side of Manhattan. The home includes a bedroom wing with en-suite bathrooms.

The house welcomes both family and friends through a private elevator landing, leading to a square entry foyer, which opens into the living room, dining space, a corner reading room, and beautiful midnight blue space with hand-rubbed venetian plaster walls overlooking the downtown Manhattan and offering a million dollar view of the tree-tops. A cozy fireplace keeps the temperature warm, perfect for winter nights while the chef’s kitchen offer top-of-the-line appliances, multiple ovens and two wine refrigerators.

The house also boasts a unique bedroom wing, which includes a primary suite, complete with almost all amenities needed while there are two secondary bedrooms with en-suite baths.

Check out the full photo gallery below of Matt Lauer’s home.

CelebsNetWorthToday.com estimates his fortune at $80 million.