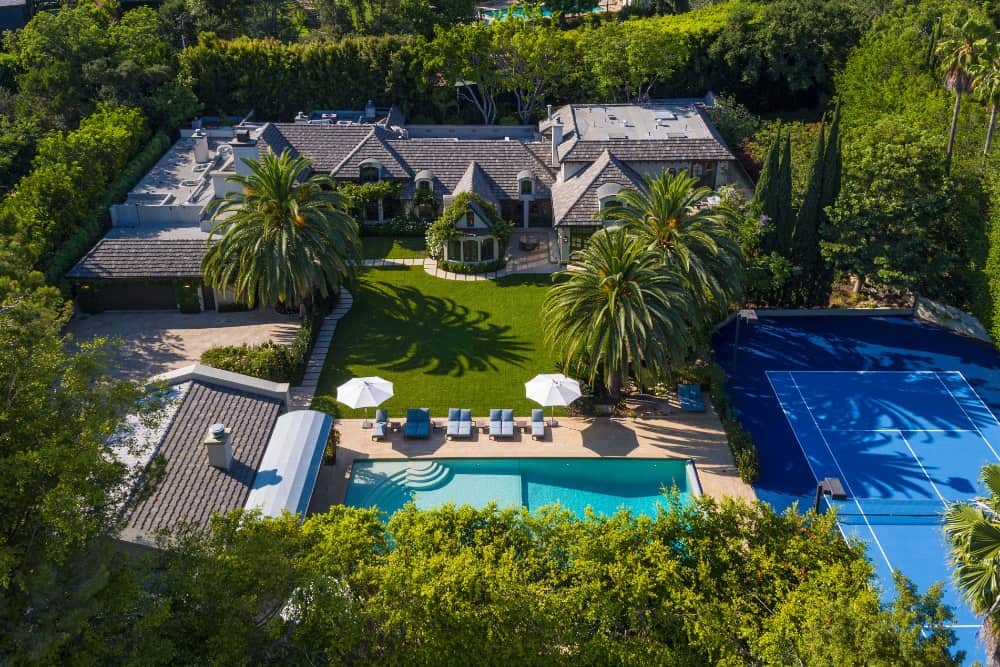 The original Queen of Pop, Madonna, is among the most successful and wealthiest recording artists in the entire world. Unsurprisingly, she has a penchant for the finest and most luxurious things in life.

That includes real estate, and the Material Girl has a notoriously fabulous portfolio of opulent homes all over the world. Among them is an enormous townhouse in New York City’s Upper East Side, a historic 18th-century estate just outside of Lisbon, Portugal, and a 10-bedroom townhome in a posh section of London.

One of the most impressive properties is a nine-bedroom, 15-bathroom estate in the heart of Beverly Hills with the main home and two guest houses totaling over 12,100 square feet. If that sparks your interest, good news – it’s on the market for a cool $33.5 million.

Madonna purchased the French Country-style mansion in 2003 with then-husband Guy Ritchie for $12 million. The previous owner was actress Sela Ward. It was originally built in 1912 and, while it boasts a highly coveted Sunset Boulevard address, it is completely lined with dense trees for privacy and features a 500-foot long gated driveway.

Inside the fully-automated “smart” main home, dramatic features wow in every room. There’s a two-story dining room and a less-formal “junior” dining room, a movie theater with seating for 15 people, multiple offices, seven fireplaces, a full-sized British-style pub, and an all-white kitchen with marble countertops and cabinets that are opened via remote control.

A smaller, secondary kitchen is just as much state-of-the-art as the main one and features custom-milled cabinets and exposed wood beam ceilings. In the primary bedroom, you’ll find a tremendous custom closet and a soaking tub with a fireplace beside it.

Huge Old World-style windows and French doors throughout the home reflect the indoor-outdoor living that Southern California is renowned for.

The 1.14-acre secluded property is lushly landscaped and features multiple outdoor dining and entertaining spaces, several of which are situated just off a bedroom. There is also a 60-foot long resort-style pool and a regulation-sized tennis court. The estate’s two guest homes feature staff quarters, offices for assistants, screening rooms, and a library.

Shortly after her divorce from Guy Ritchie, Madonna listed the estate for sale in 2013 for $28 million. The original listing reportedly didn’t even include any photos. The home sold later that year for $19.5 million to a private equity investor. It changed hands again in 2015, this time purchased for $28 million by Russ Weiner, the founder of Rockstar energy drinks.

Weiner never lived in the home himself, instead extensively renovating it and then relisting it in 2017 for nearly double the price he paid. It’s been on and off the market ever since, with prices ranging from a high of $45 million in 2017 to its current listing prices of $33.5 million. Celebrity neighbors include Greek shipping heir Stavros Niarchos and American Idol host and judge Simon Cowell.