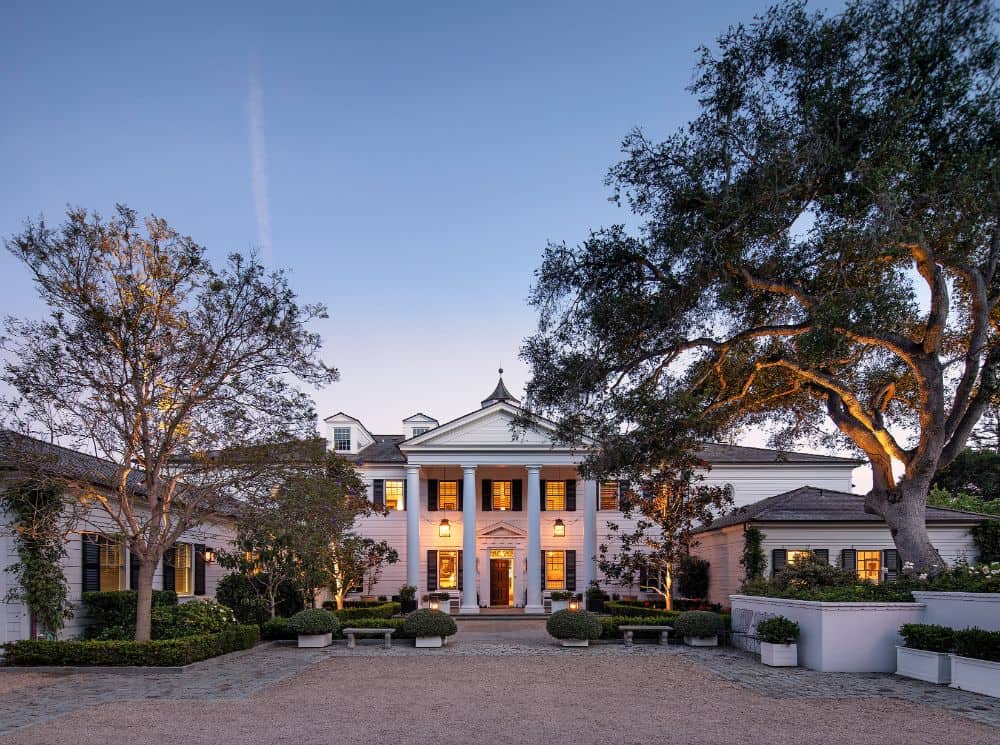 The 10,000-square-foot Georgian Colonial-style home of Rob Lowe is now up for sale! The breathtaking property is priced at $47 million.

Rob Lowe is likely best well known for the many hit films he starred in the 1980s, such as St. Elmo’s Fire, The Outsiders, and more recently- The Invention of Lying. Based on this alone, you might expect him to have outlandish taste in homes. But Lowe’s palatial Georgian style mansion is truly a sight to behold in all of its classical beauty and charm.

It is a 10,000+ square foot mansion in beautiful Montecito, California. It sits on approximately three acres of open land, features eight bedrooms, 11 bathrooms, and twenty rooms total- not including a few semi-outdoor rooms. The listed worth of the property is approximately $47 million. However, Lowe’s unique renovations may change the listed price after the next surveys are completed.

Standing outside near sunset at the far end of the south garden, the lights of the house appear to glow orange against the stark white outer walls and pillars. A grand yew tree stands over an outdoor presentation and entertaining area.

Passing indoors, we find a sprawling family/meeting room with plush pearl furniture, marble tables and a massive fireplace under an ornate white mantle. The tastefully aged hardwood floor is made from American hickory, which is second in class and durability only to European ash.

In the main dining room, we find a long glass table to seat 10 guests next to another massive fireplace. This room, like the first, is not overly large- in keeping with the Georgian architectural style which is as much about practicality as it is about well-proportioned style.

In keeping with the design and architectural theme of the house, the kitchen features an enormous central prep island. Topped in white marble, the island features four high seating positions at one end and is rounded about by storage compartments and lit with low hanging crystal lamps.

Nearby, we find the pool, with white furniture, a granite deck, and plenty of shaded seating. Along the north side of the pool is a long fleet of tanning chairs- just like something we might see a beautiful, young woman sunbathing on in one of Lowe’s many summer blockbuster films. A short jaunt away, one finds tennis courts amid the endless, sprawling gardens.

The location, of course, cannot be left out. It is a beach town, with one of the few stretches of beach in California that actually faces south. Behind, the Lowe mansion stands a stretch of hills that could easily be described as small mountains. It is an endless, rocky, mountainous stretch of land- rolling and rugged which serves to remind us that central and southern California is naturally a desert. It is perhaps the largest and most successfully terraformed landscape on Earth- the home of the American movie industry.