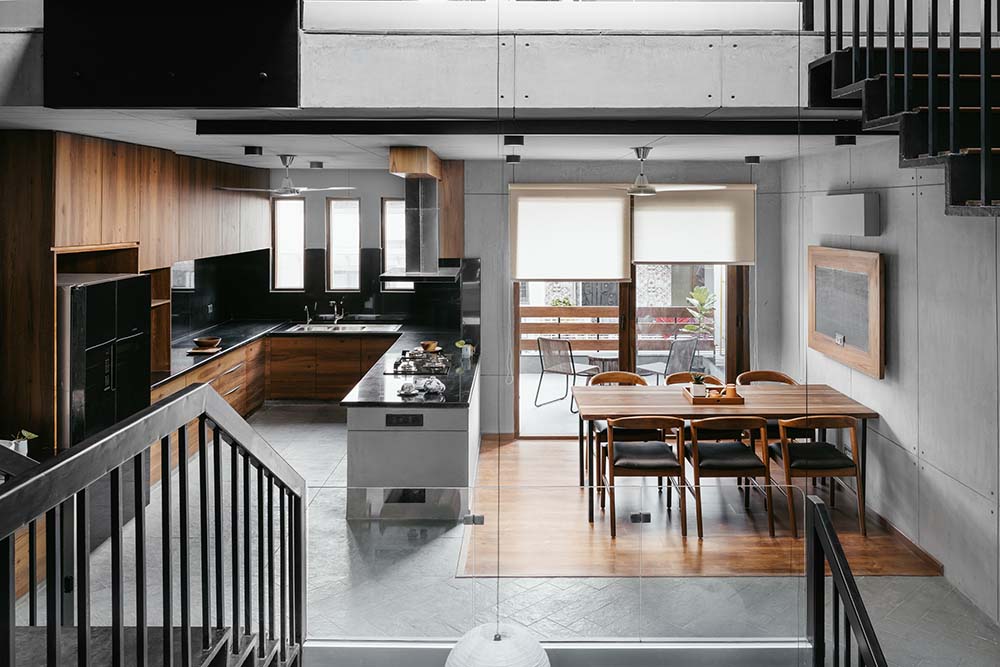 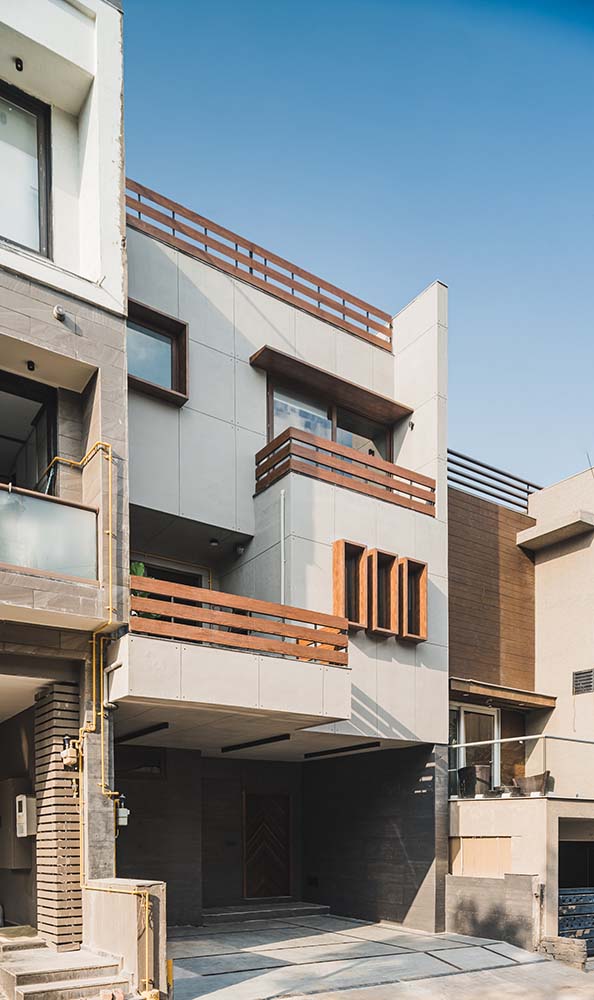 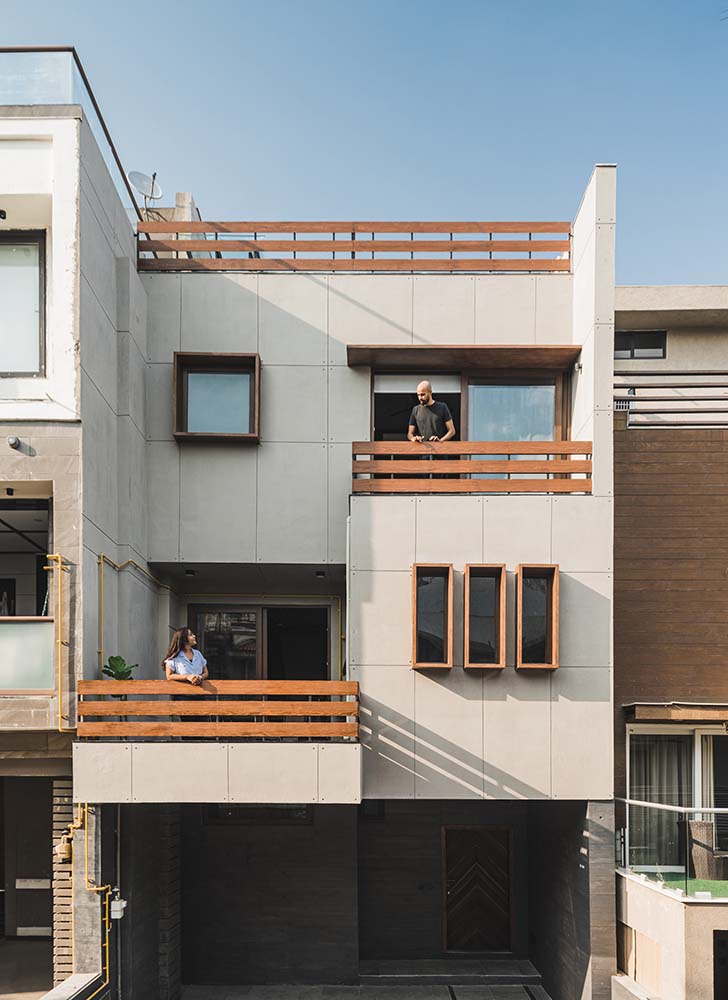 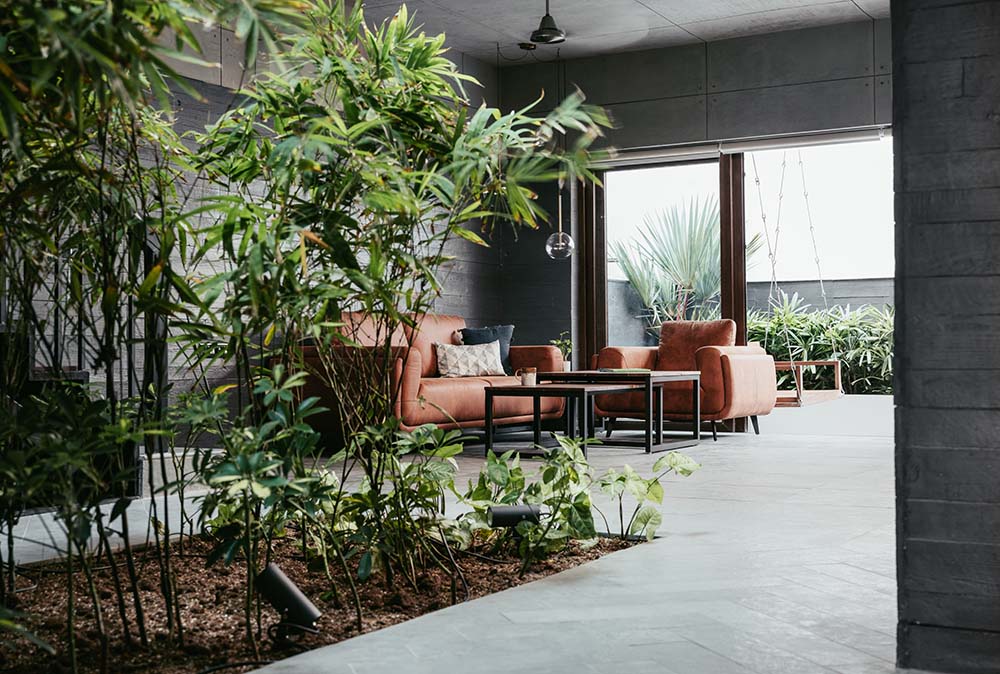 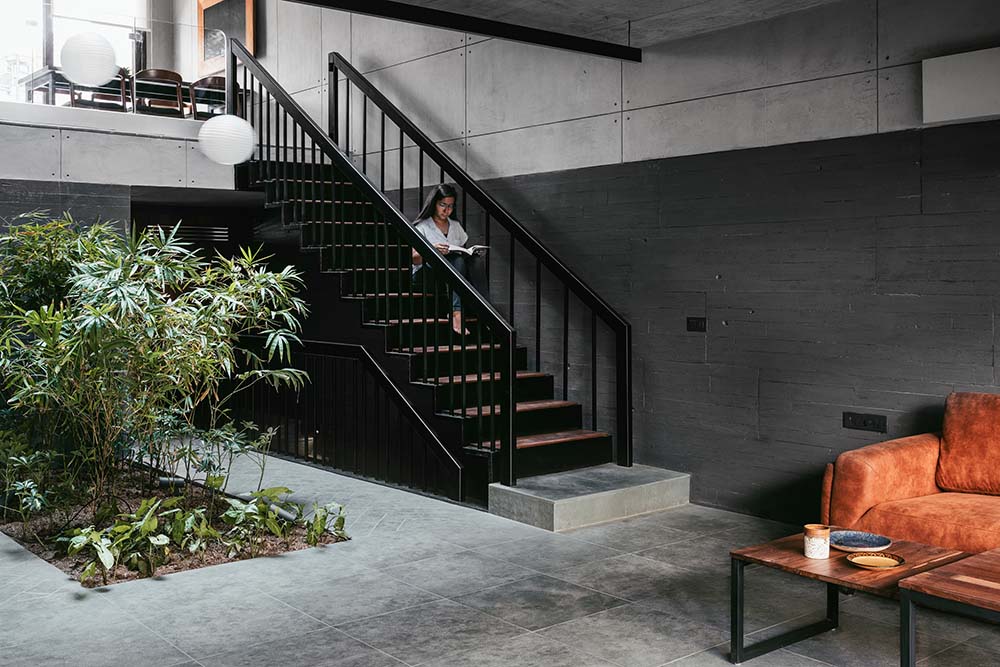 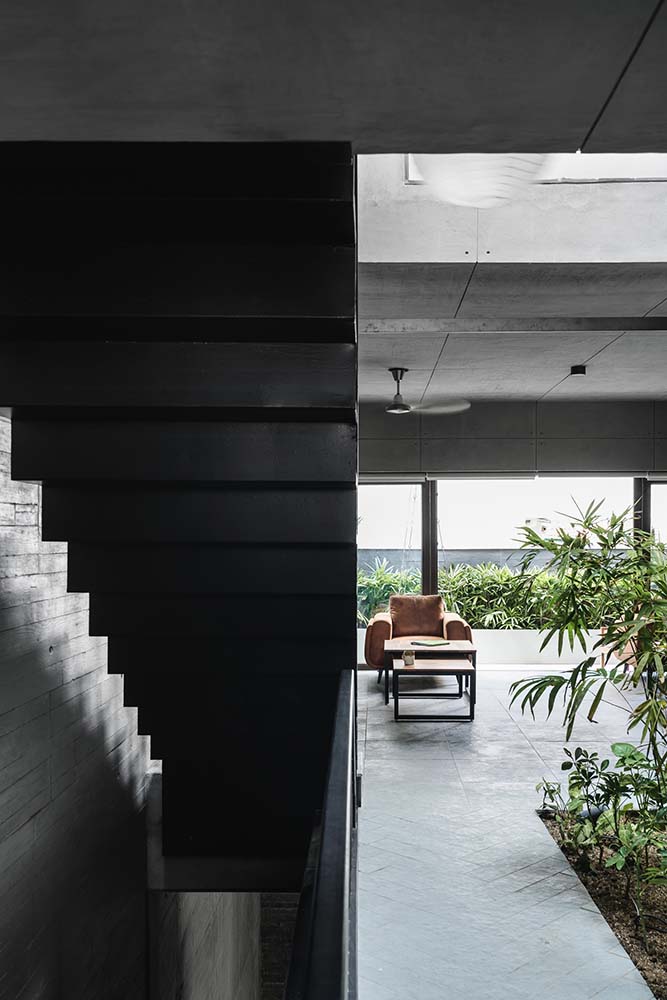 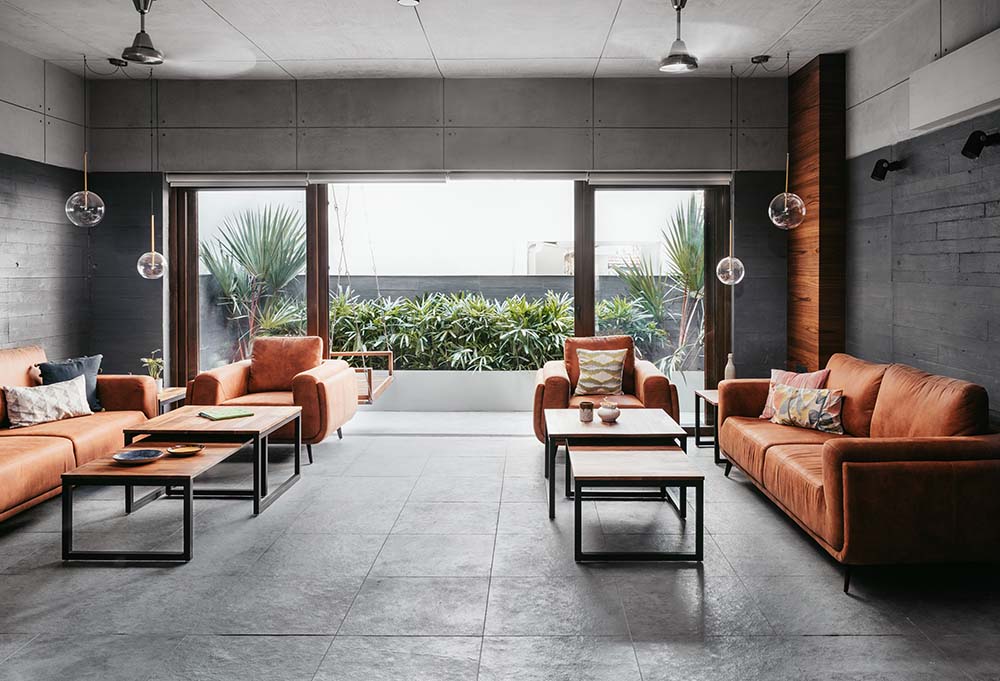 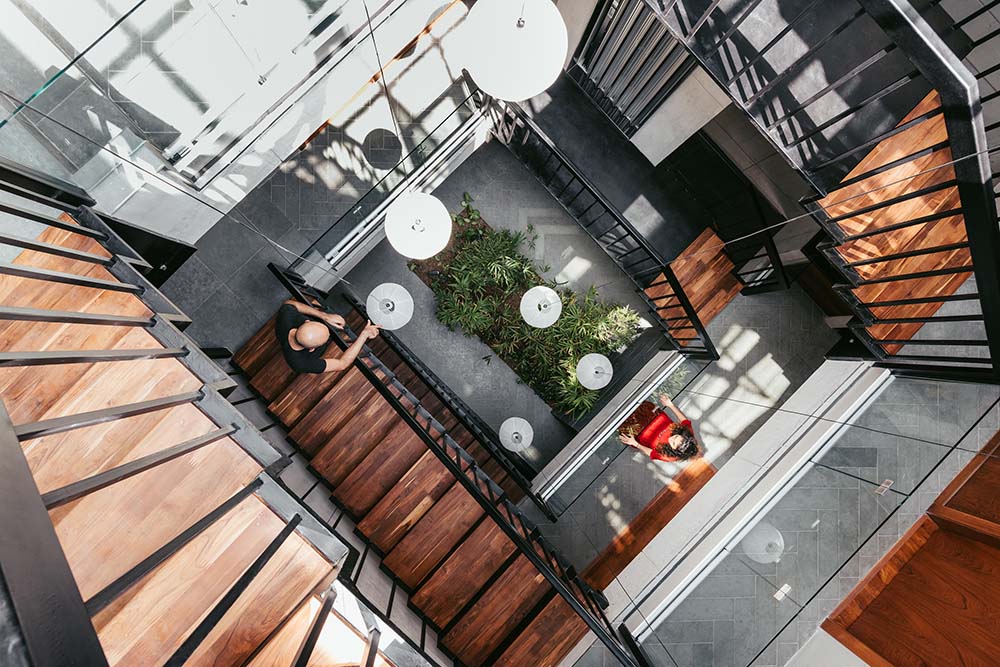 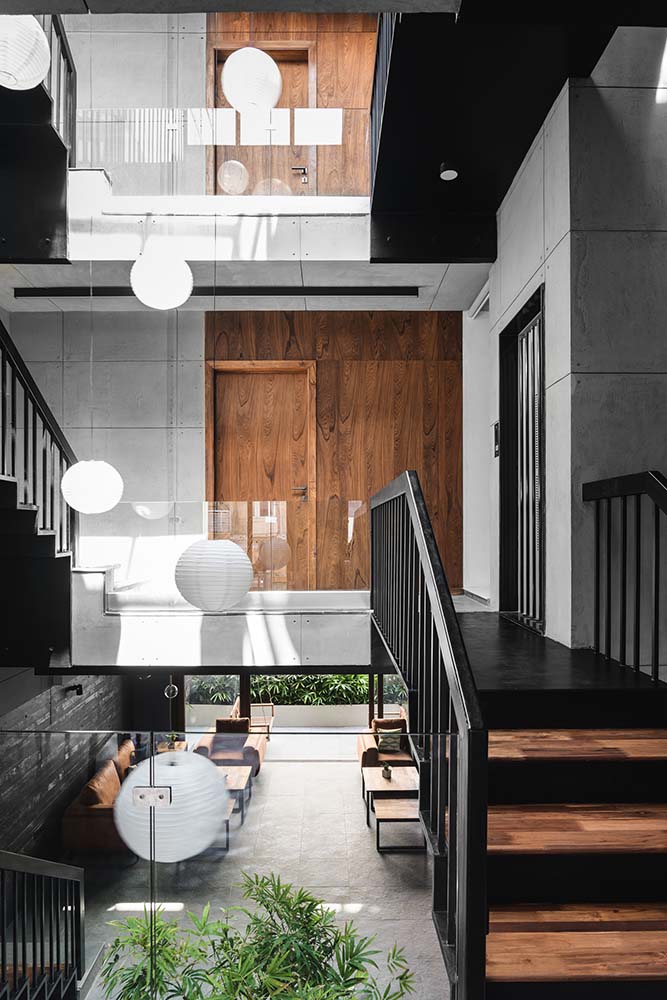 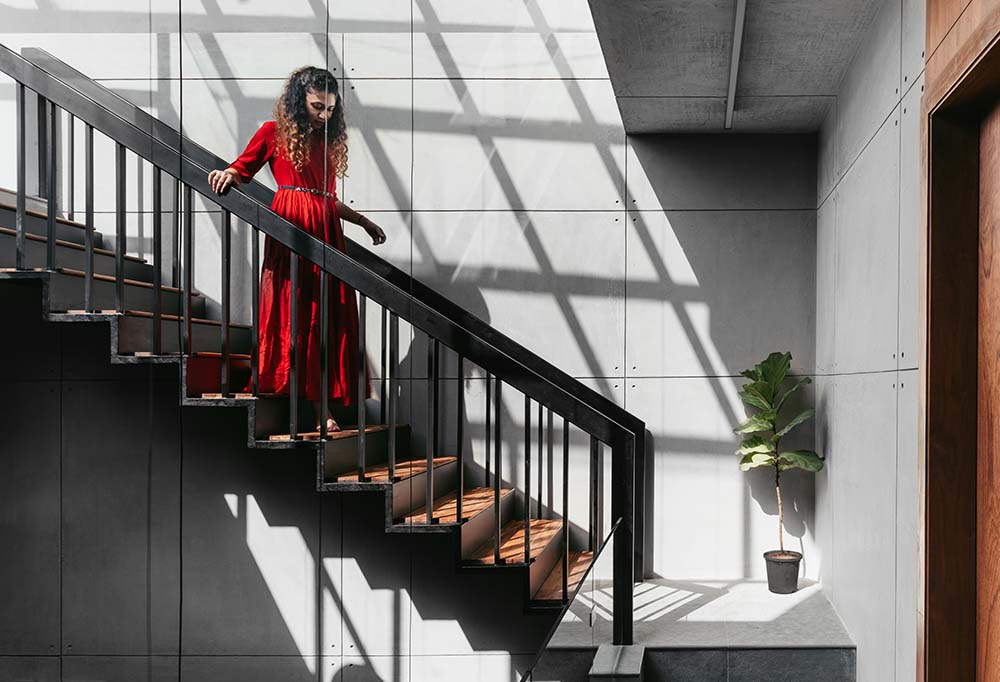 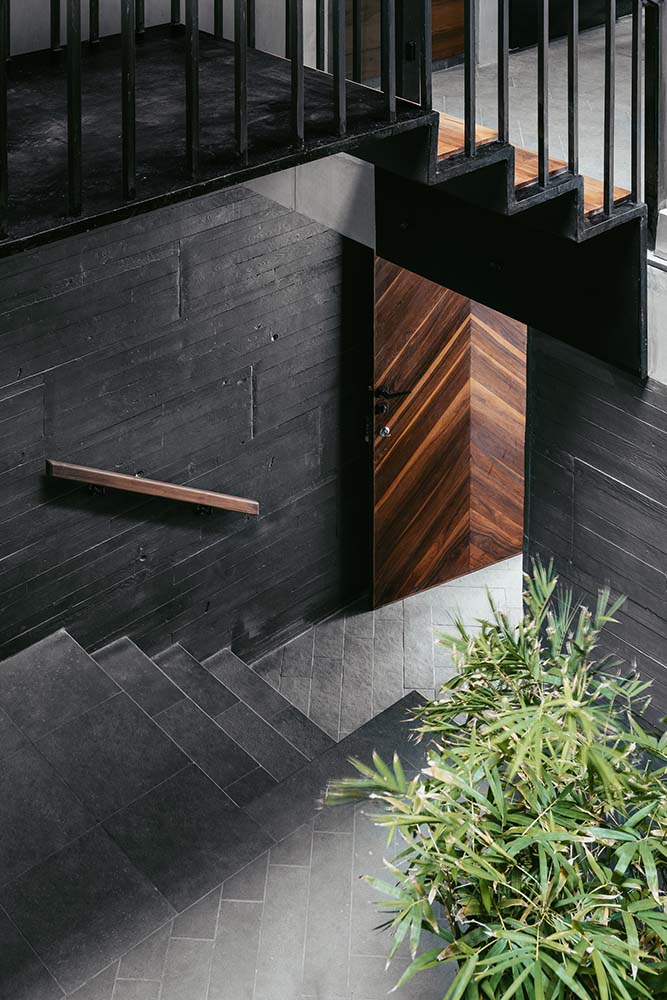 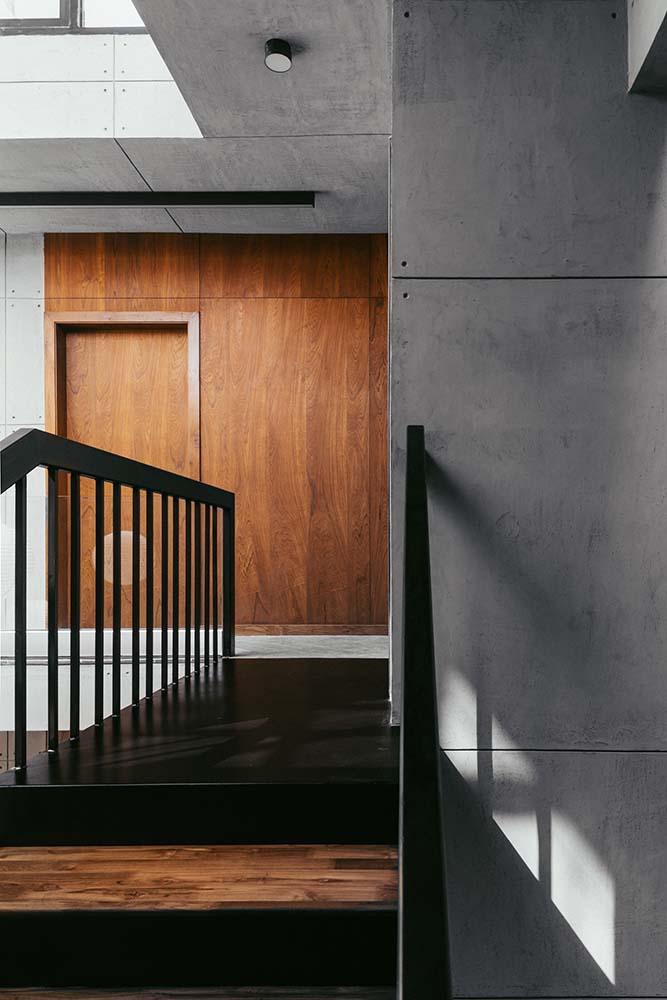 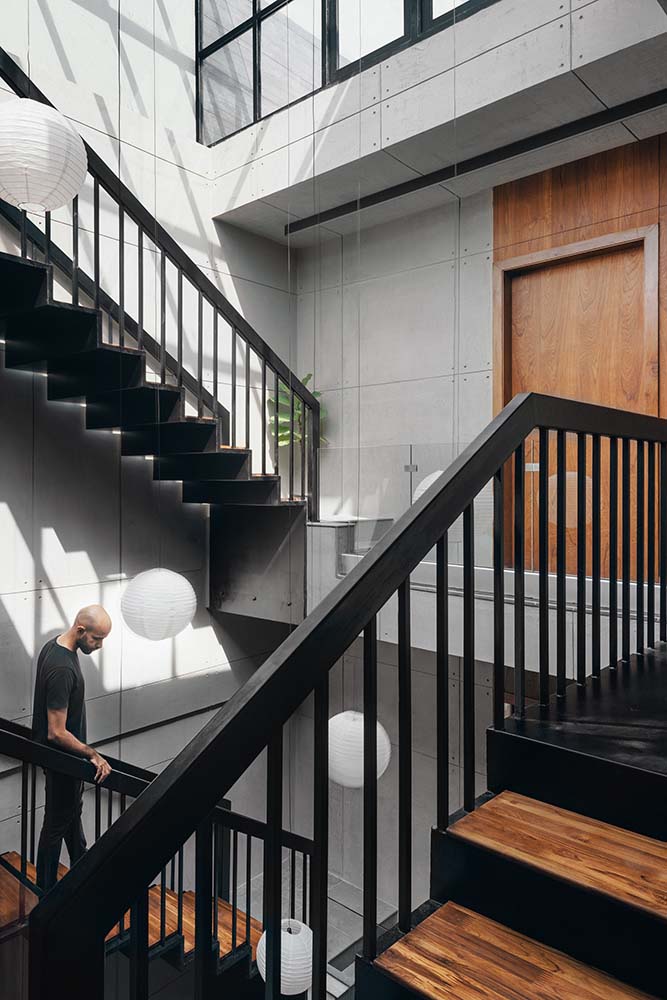 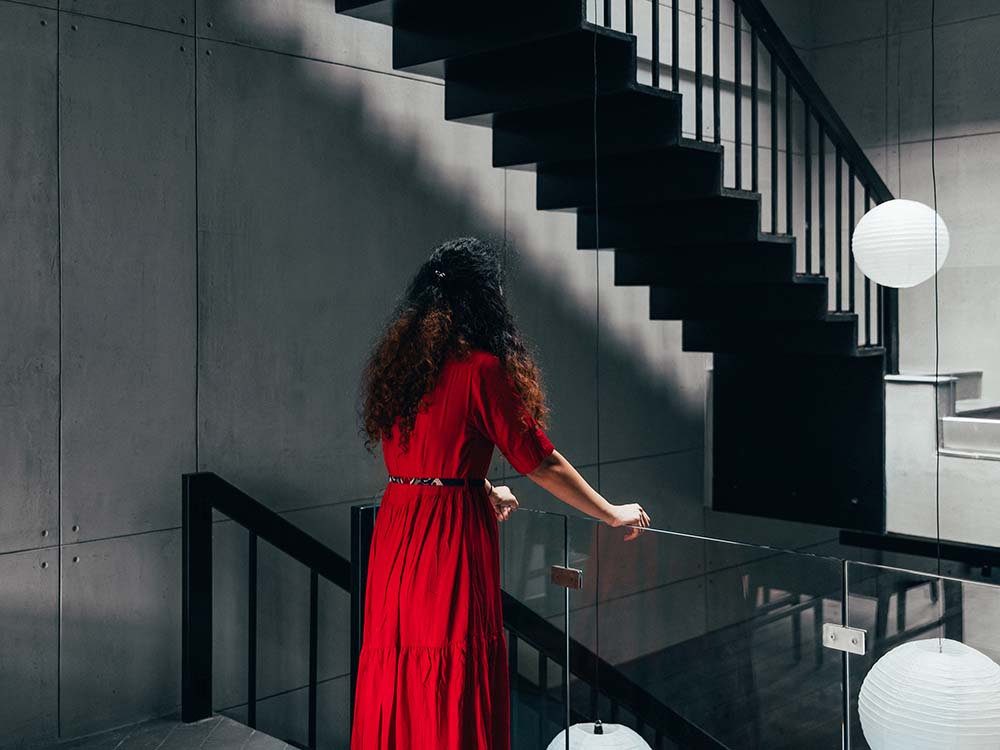 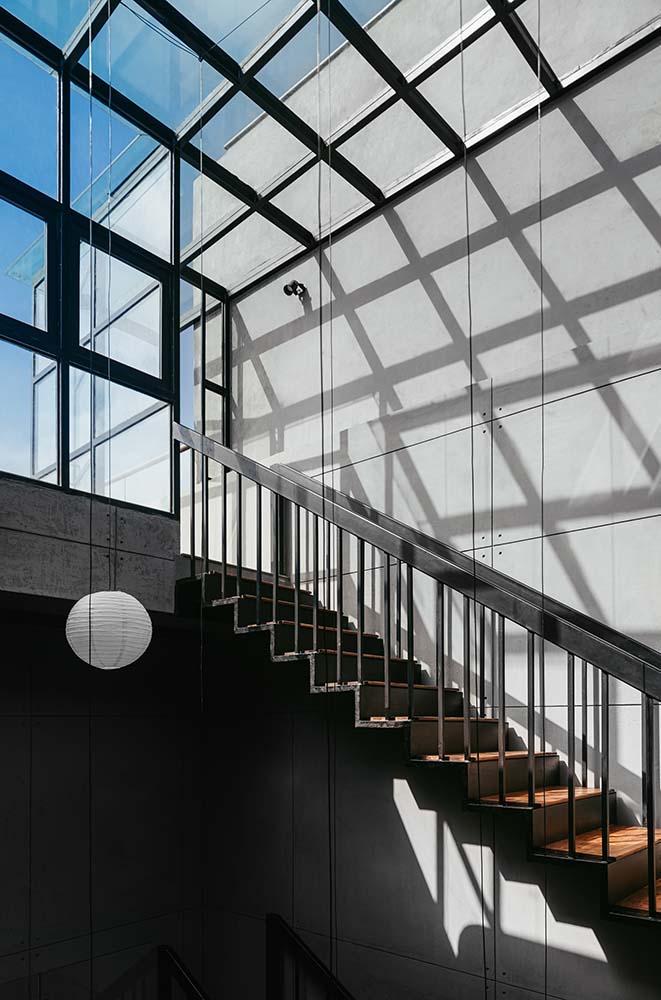 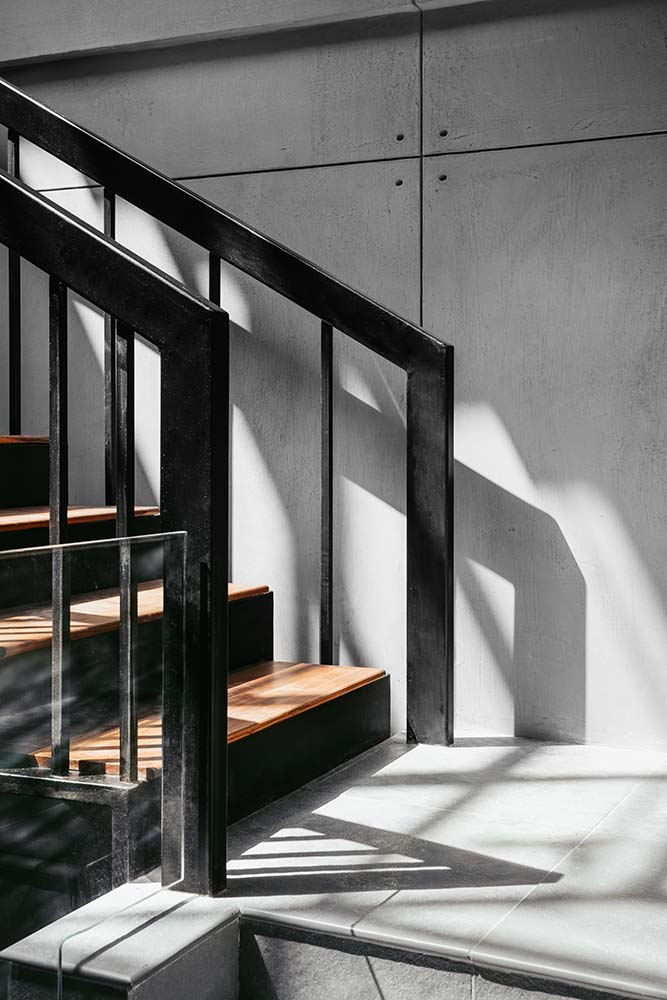 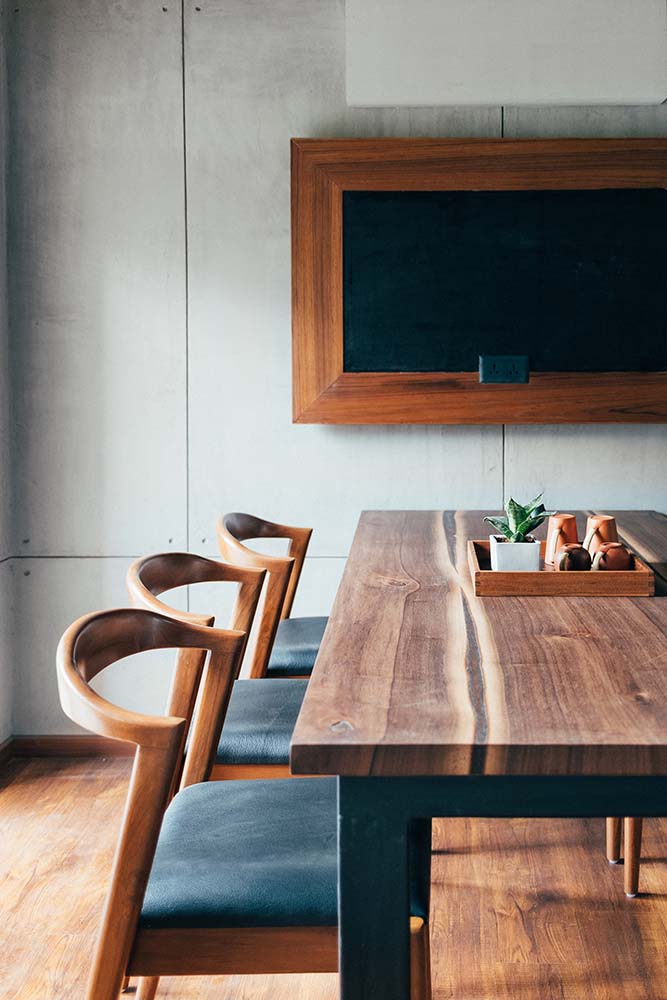 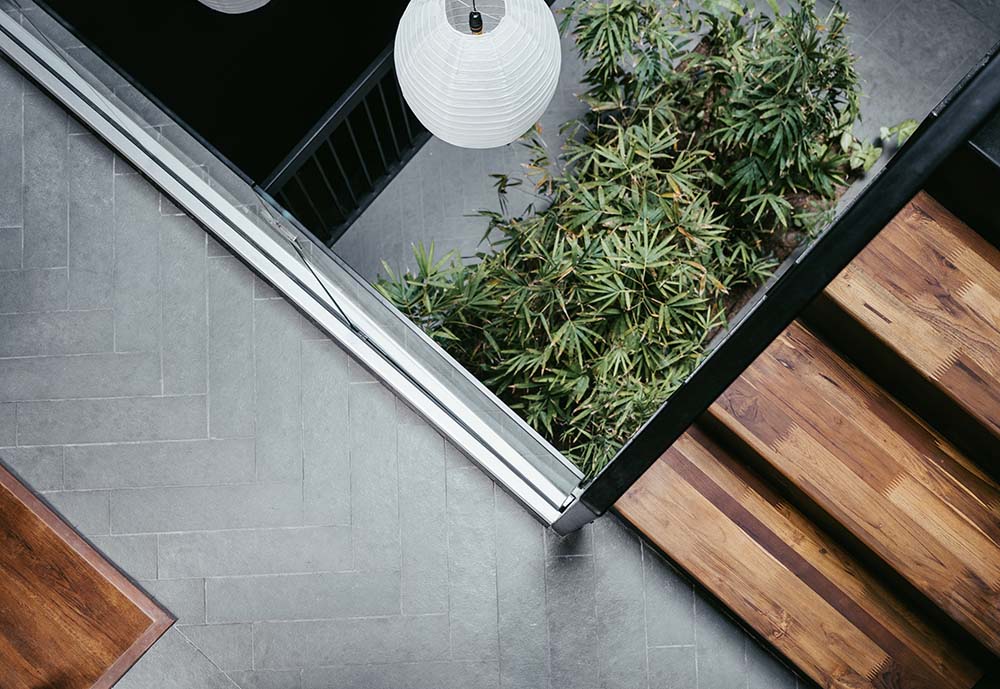 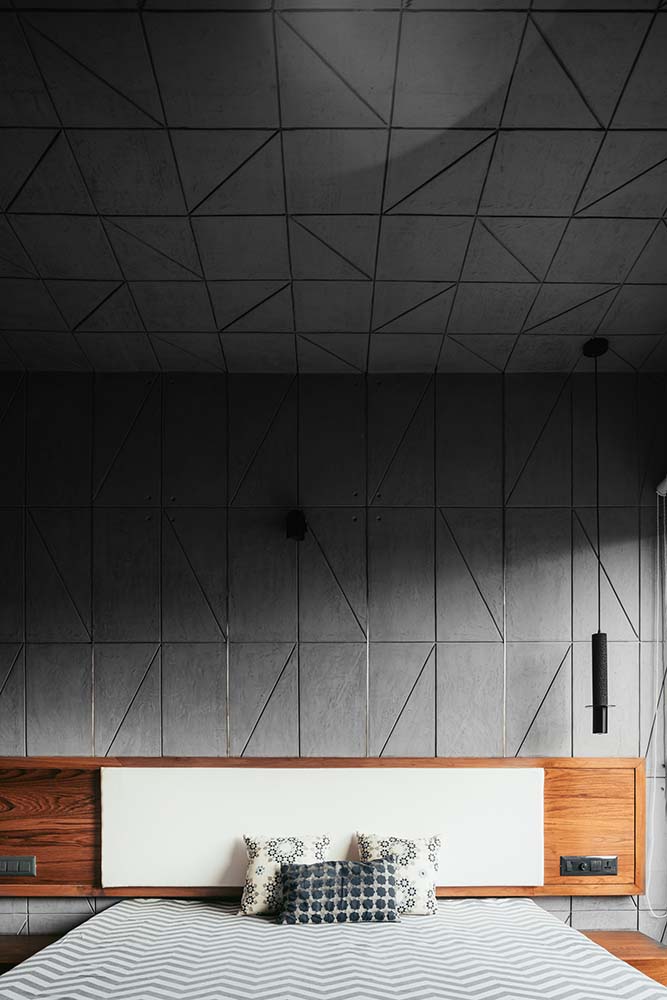 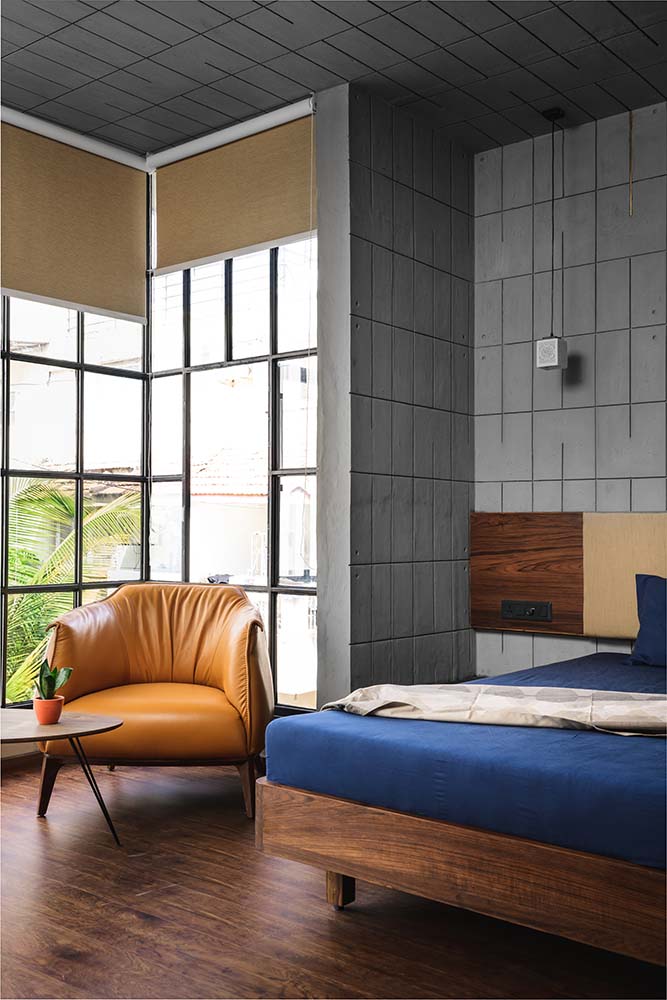 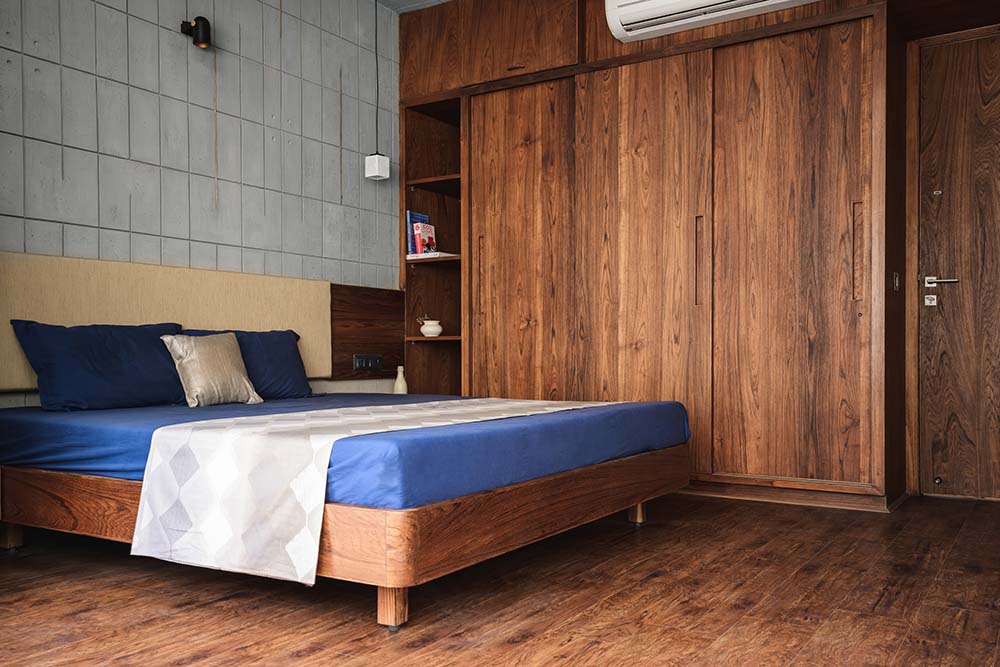 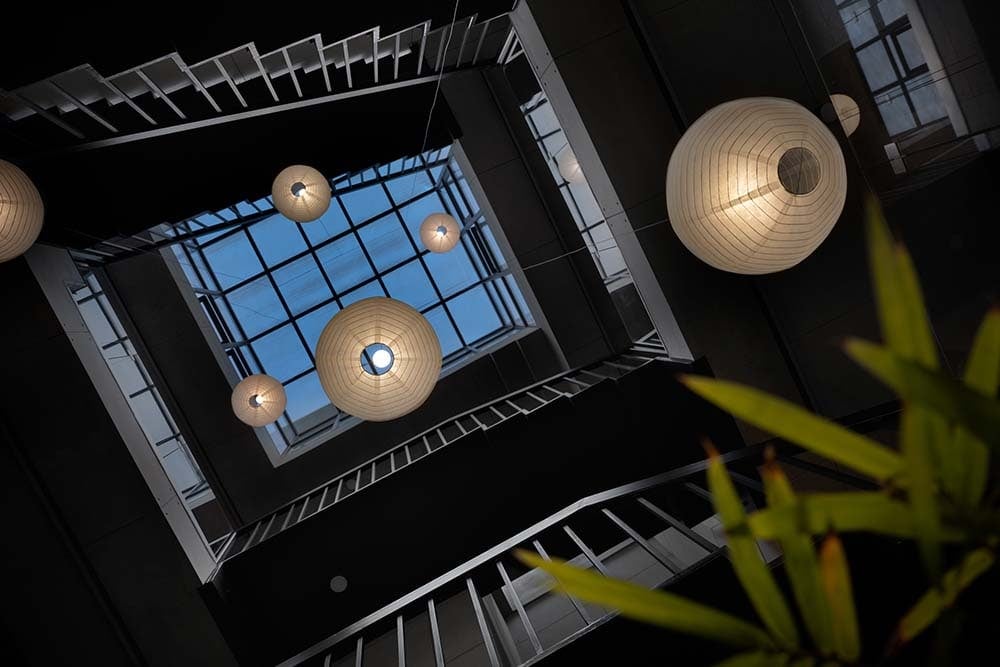 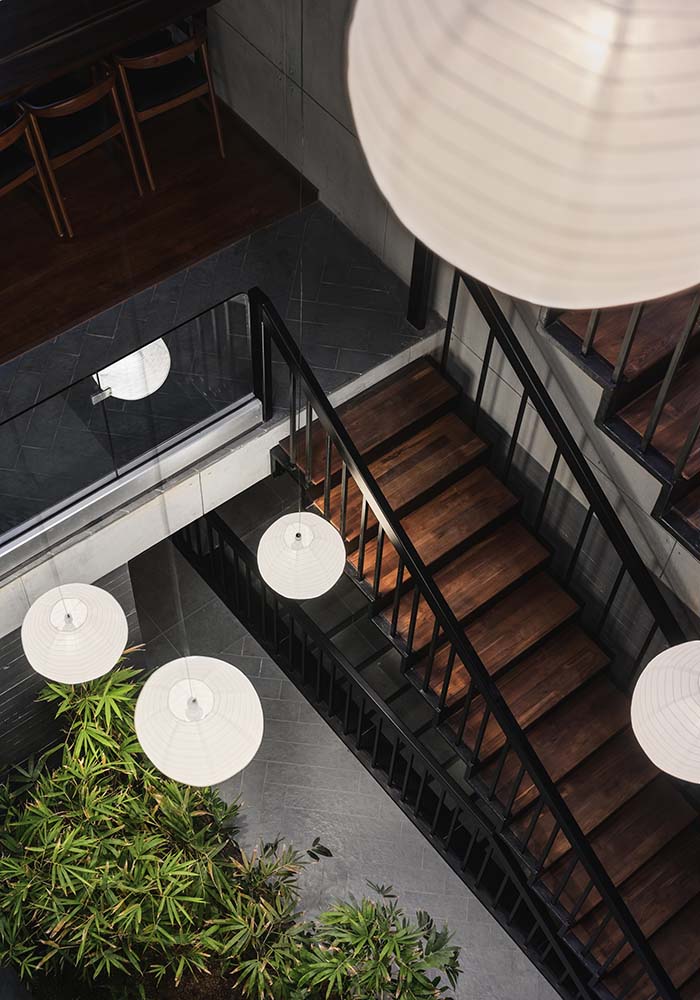 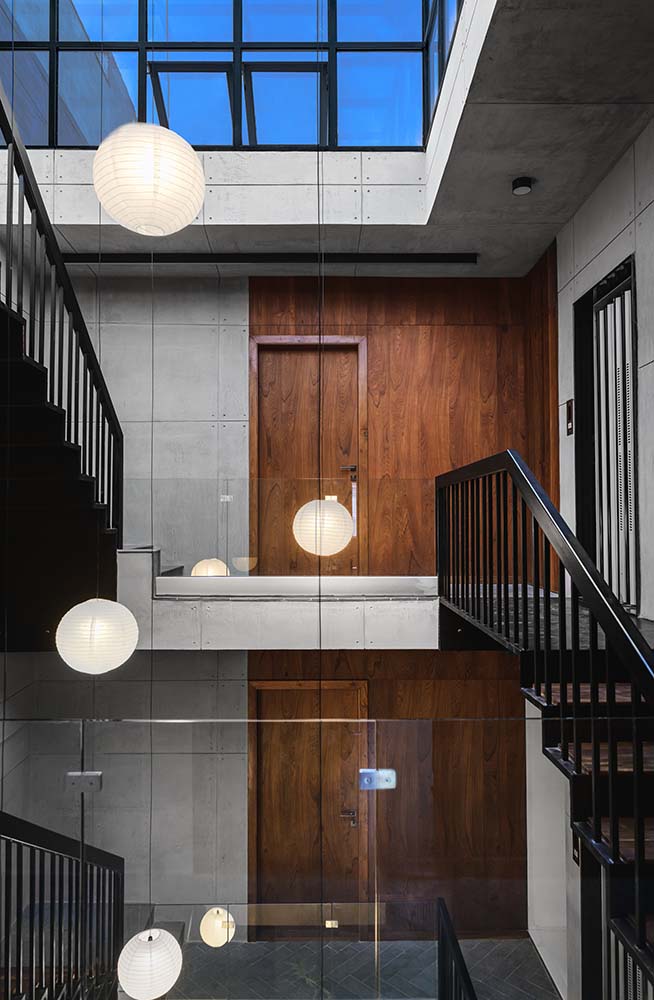 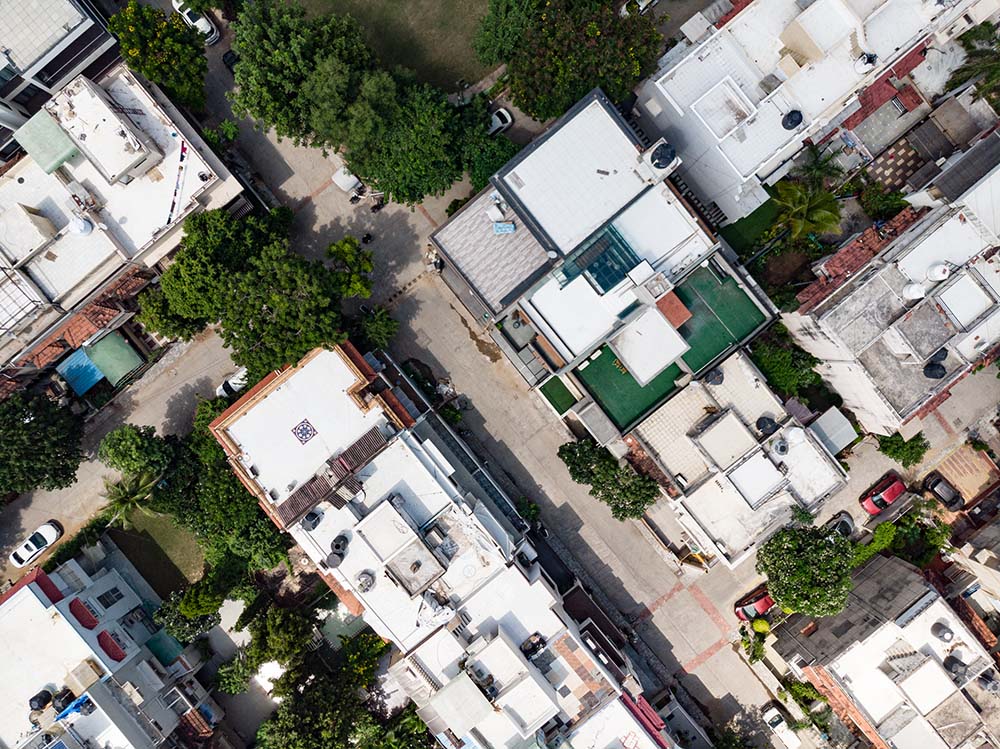 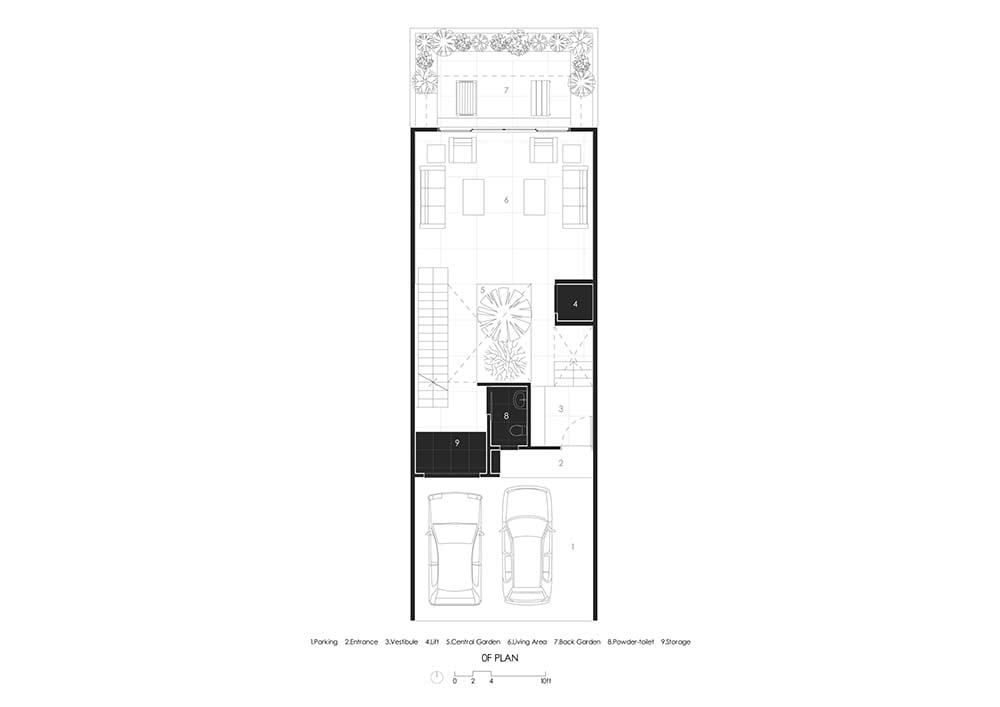 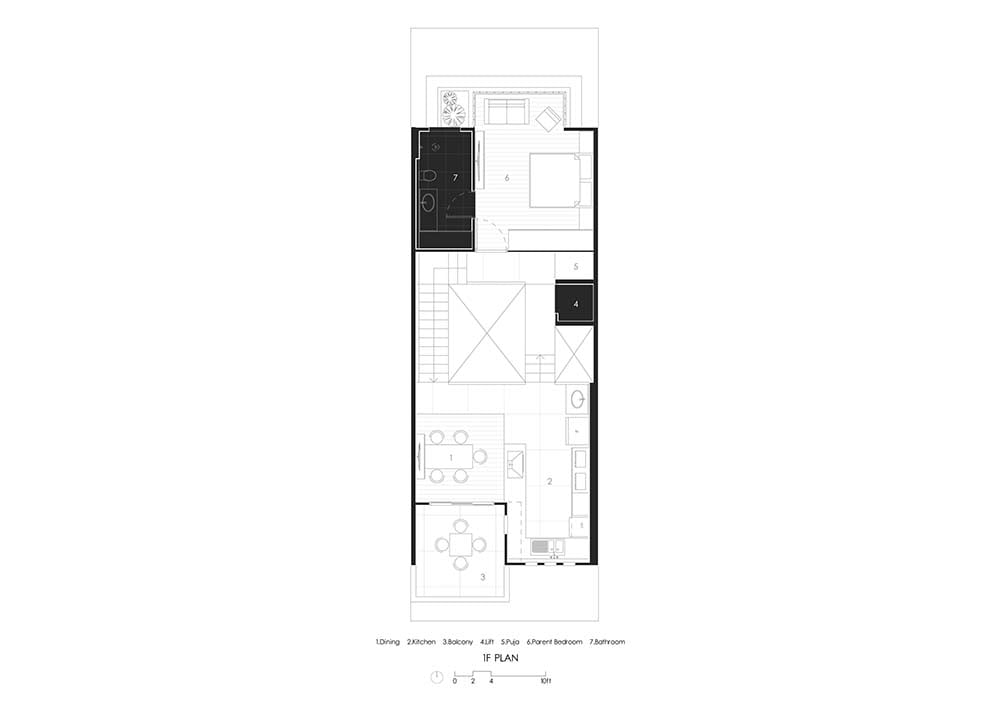 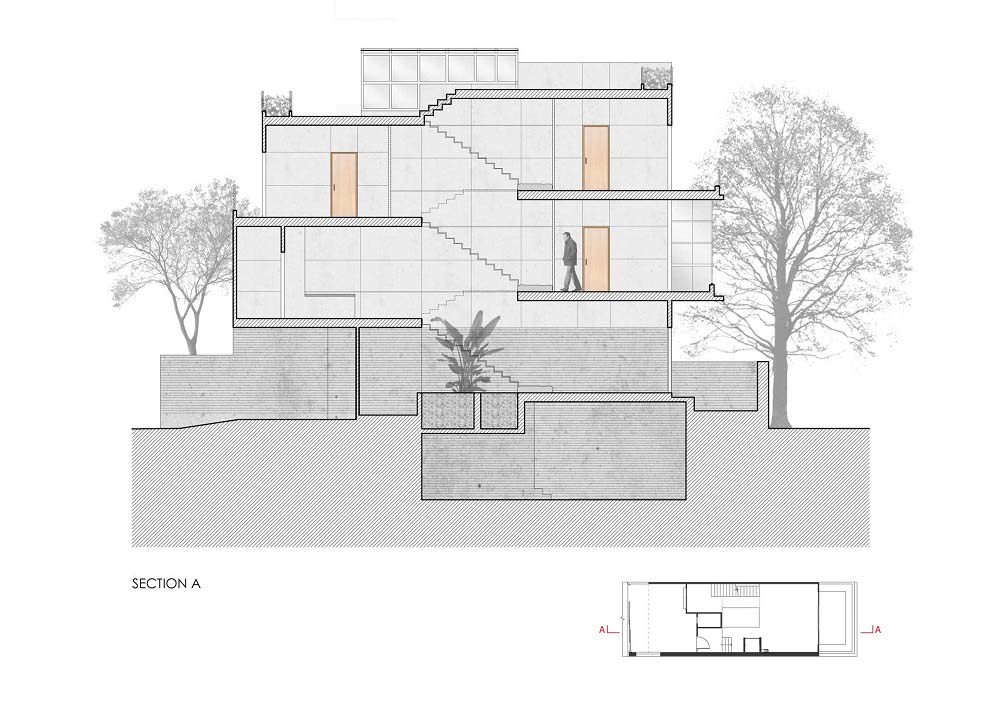 Situated in the heart of the city of Ahmedabad, HS house is a compact family home with common walls shared with the houses adjacent to it. This context gets a little tricky as buildings on both sides were supposed to remain untouched while the house in between them, was to be demolished and built again.

While designing HS House, the biggest contextual challenge was that the light and ventilation were only possible through the two short sides of the house. This was the defining factor behind the design, which led to the insertion of a large court in the middle, to light up the entire house. The glass box above this court is used as a hot air attractor creating an air draft upwards, which is then removed through small openings at both sides.

Spatially, the house is planned in a simple manner. The first level is a gathering area with a small back garden and a central court garden which is the space that one first enters into. This level goes down to a basement space meant for future development and goes up to the kitchen and dining level with a large outdoor balcony that opens in the front facade.

From then onwards, each level is an individual bedroom with an attached toilet. At the topmost level, the lower terrace acts as another gathering space while the upper one on the rear end is a service terrace. A small elevator has been incorporated, for the elderly to have easy access throughout the house.

Volumetrically, the house is divided into split levels to squeeze in as much of the spaces as possible in a small volume, allowing for the front of the building to lie half a story lower than the back. This also provided an opportunity to focus on the experience of moving vertically in the central court.

The materiality of the house is kept at a bare minimum, with exposed concrete allowing for natural light to create dynamism through the entire home. On the ground floor, the exposed concrete has a black pigment in it and is cast using wooden strips. This was done through pre-cast concrete panels to reduce the cost, as well as to use the least possible amount of wood.

The horizontality of these panels, along with the larger amount of texture and a darker color, gives the house a heavy base. The parts above were cast in-situ with the natural light grey shade of concrete. All the bedrooms have different patterns cast across the concrete, some with grooves inlaid with brass.

The staircase is the main sculptural element in the house which connects essentially two separate concrete blocks. Made using a metal structure sandwiched by sheet metal, it is structurally spanned with the help of a thick handrail that acts as a beam, suspending the staircase from it. Wooden treads on top of this black metal staircase add a softness, allowing ease to walk on it barefoot.

Throughout the house, Kota stone is used in the flooring in multiple patterns, differentiating movement area from the places of pause. Metal accents apart from the staircase are black as well, and wooden accents are used throughout in windows, doors, partitions, storage, and even the flooring in the private spaces.