If affluence and eccentricity were mutually exclusive, the strange and beautiful $18 million New Jersey home of Forest Dryden would break the rule. The founder of Prudential Insurance, in cooperation with a number of other top insurance magnates, created what is one of the most esoteric homes we have ever reviewed. 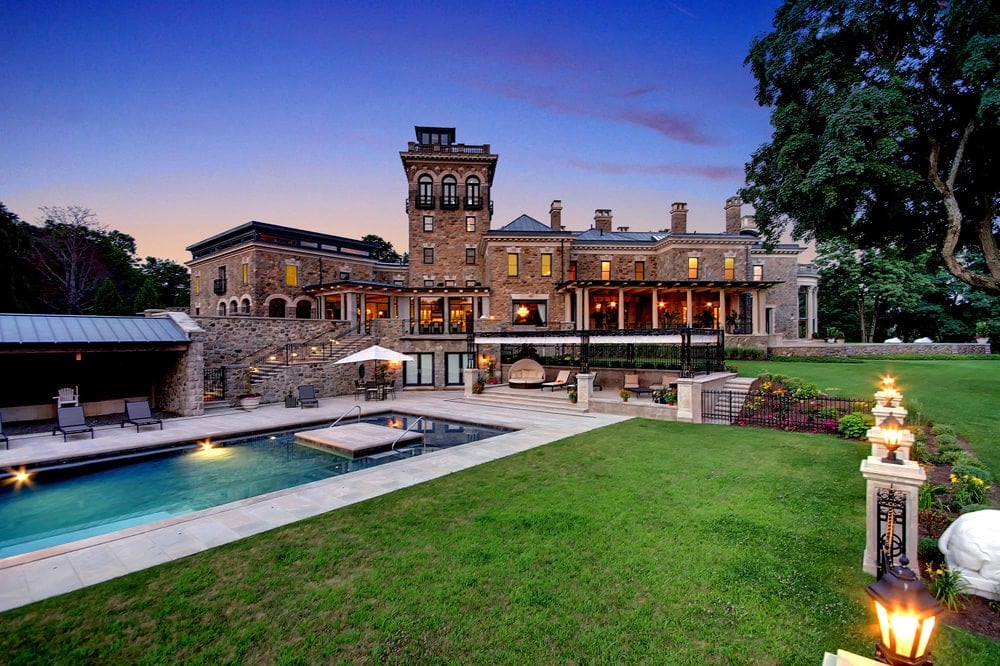 With a legacy built on his founding of the massively successful Prudential Insurance company, Forest Dryden financed what amounts to a modern castle in Somerset Hills, New Jersey.

Currently on the market for $18 million, the home encompasses more than 30,000 square feet, incorporates eleven bathrooms, seven bedrooms, and a host of additional amenities which would take an entire afternoon to survey.

The home is named “Stronghold,” reinforcing its castle-like demeanor- and the front entryway further reinforces this motif with heavy pillars, a sternly beamed-over ceiling, and a wide, marble floor, all rendered in warm, but imposing dark browns.

The main living area almost looks like a central space in a natural history museum with very high ceilings, high beams, aggressive light admittance, and what appears to be a giant model of a molecule inside a carbon shell, suspended from on high.

The dining room is as striking as they come with a large, round wood-tile floor, palatial moldings along with the ceiling and seams, and the graceful chandelier hanging over the table. The large table seats 10 with plush, but simple chairs upholstered in purple fabric. One side of the room opens up to a large window with a generous view of the equally generous front garden.

Dryden’s office is easily the highlight of this magnificent structure. It is roughly 30 by 30 feet square and is walled in by stone arches enclosed with at least half a dozen glass double doors. A central workbench stands on two skull-shaped pillars in the middle of the room and has a work surface large enough to sleep on if one felt so inclined.

On the floor of the top level of the building exists a circular balcony looking down on the levels below. Standing on the lower level, one notices that what can be seen of the upper-most ceiling reveals an image of the Earth. The image looks like a globe from the lower level. The ceiling below the balcony is rendered in heavy, ornate wood full of marks and stars. The impression that is created is of looking up into space at the Earth through some sort of kaleidoscopic telescope. It is, world-view destabilizing, to say the least.

To appreciate the effect of the balcony and its lower floor, one must step into the garden to view the tower that contains it from outside. It is impressive enough, standing two floors higher than the rest of the structure. But once you know what it contains, it begins to feel more like the centerpiece of some kind of magic-based space program.