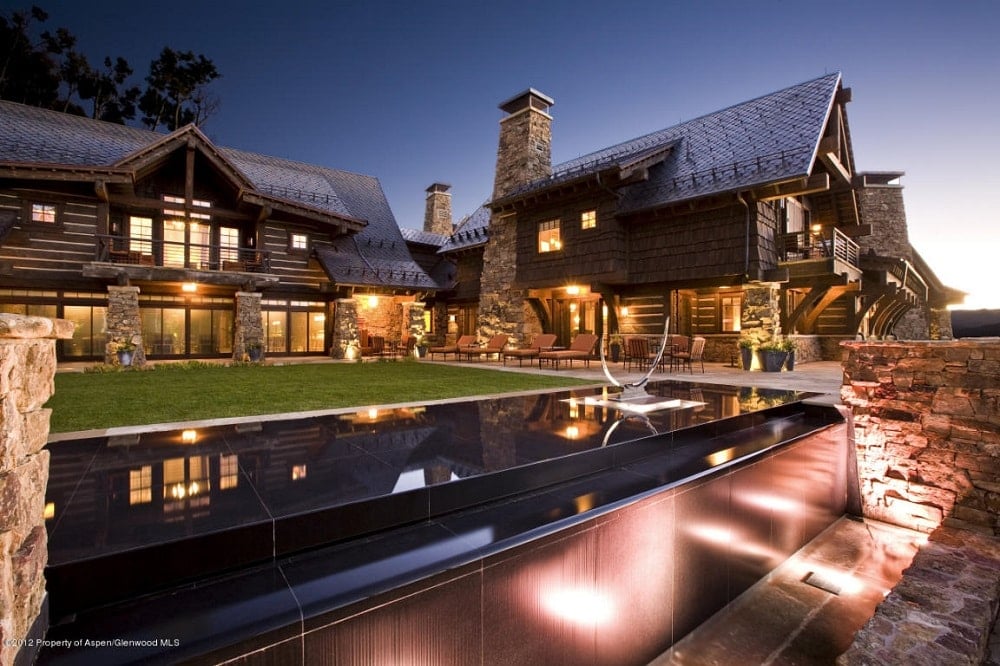 In 1989, Elle Macpherson was christened “the body” by Time magazine because her body looked so gorgeous on its cover that year. She is a 6-foot tall Australian businesswoman, actress, television host, and of course, supermodel. As a supermodel, she has graced the covers of GQ, Elle, Cosmopolitan, Harper’s Bazaar, and has been on the Sports Illustrated cover five record-breaking times spanning the years 1986 through 2006. 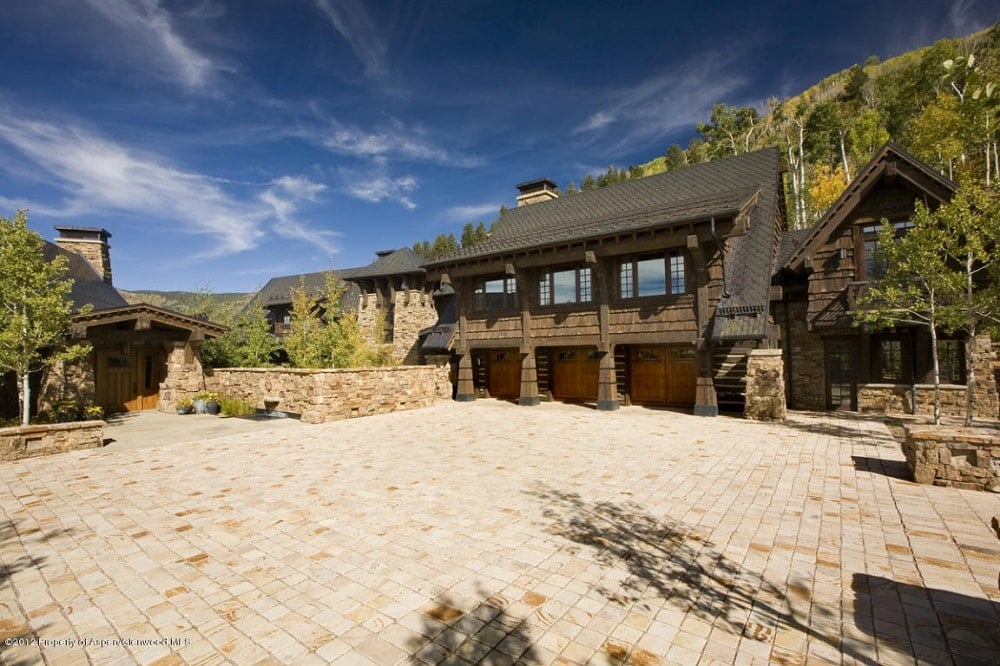 This is a view of the house from the vantage of the spacious courtyard and driveway. Here you can see the three garage doors and the main entrance on the side. Image courtesy of Toptenrealestatedeals.com. 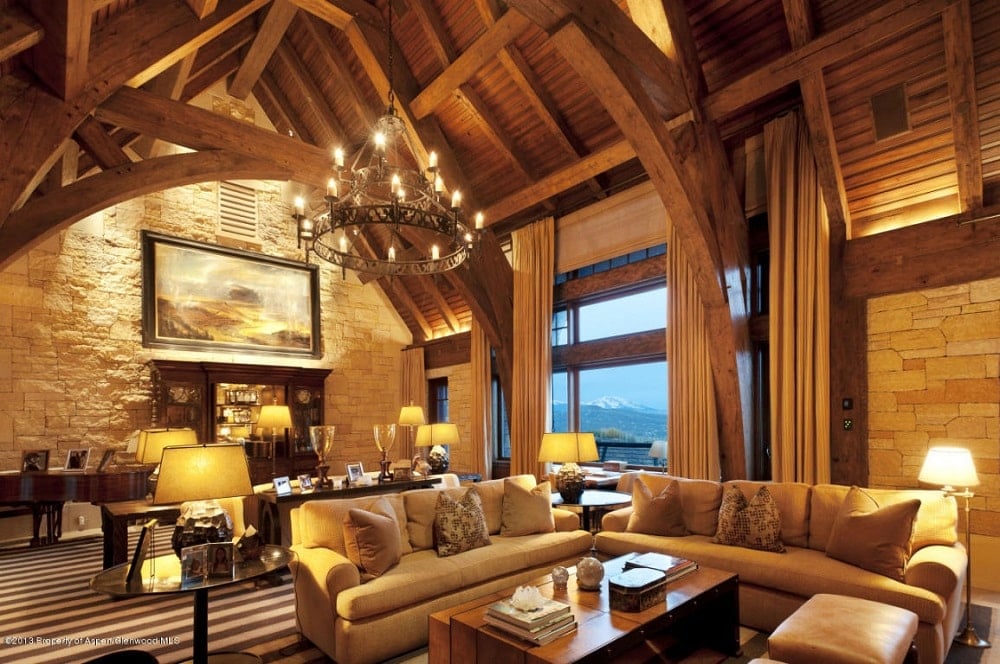 The living room has a tall wooden cathedral ceiling with exposed beams and a large circular chandelier hanging over the sofas. Image courtesy of Toptenrealestatedeals.com. 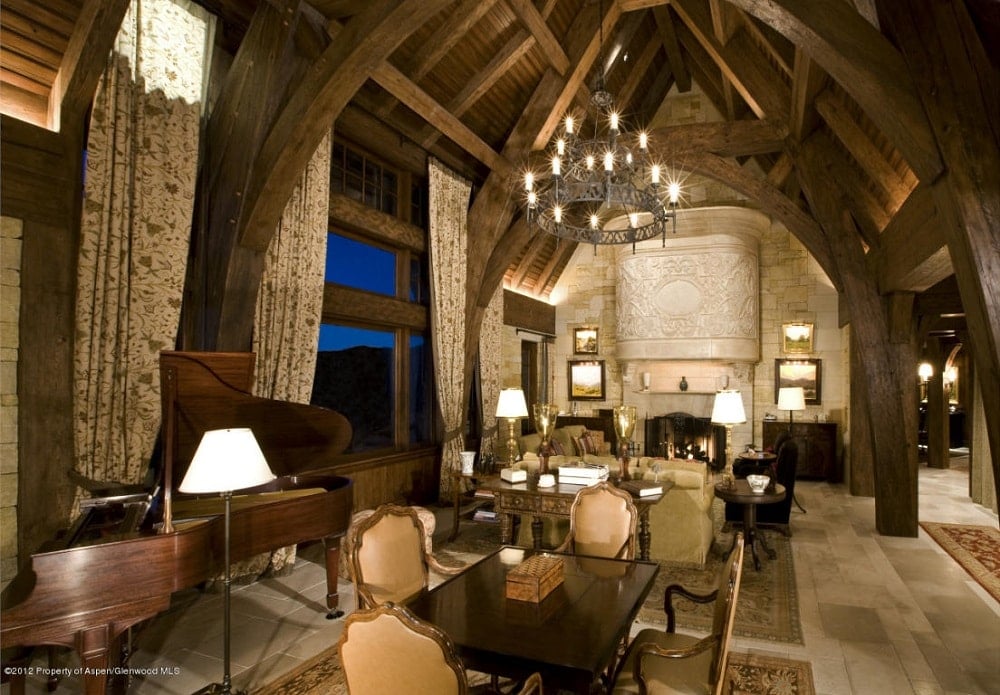 This other view of the living room showcases the fireplace on the far side across from the sofa. This is housed within a large wall with carvings. Image courtesy of Toptenrealestatedeals.com. 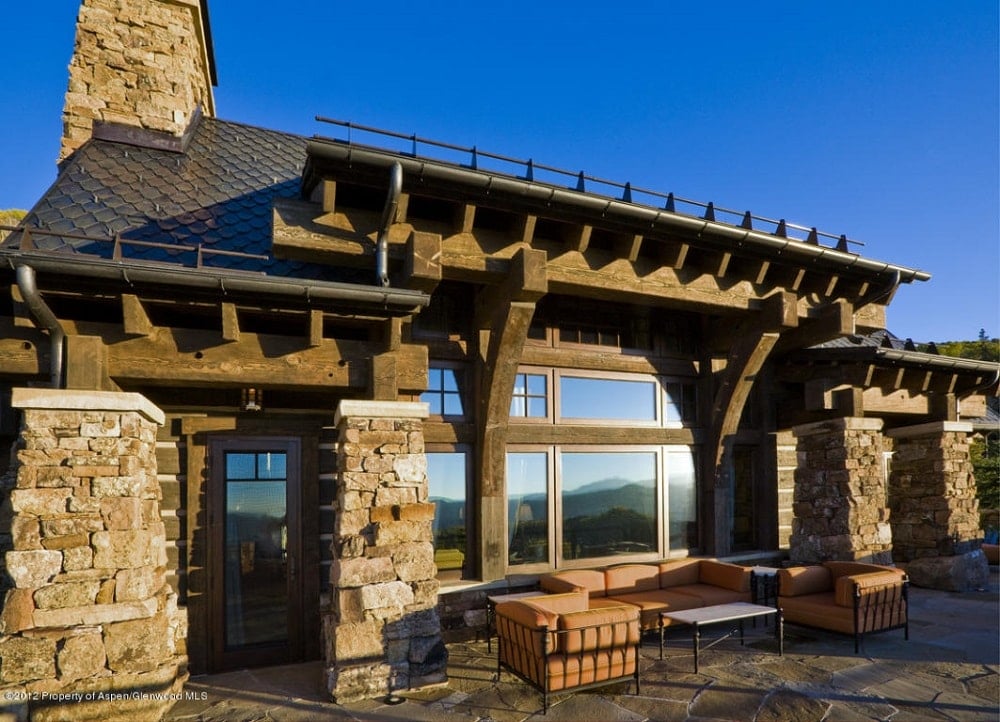 This is a close look at the side of the house with large glass windows adorned by thick stone pillars. You can see here the patio that was fitted with outdoor furniture with brown cushions. Image courtesy of Toptenrealestatedeals.com. 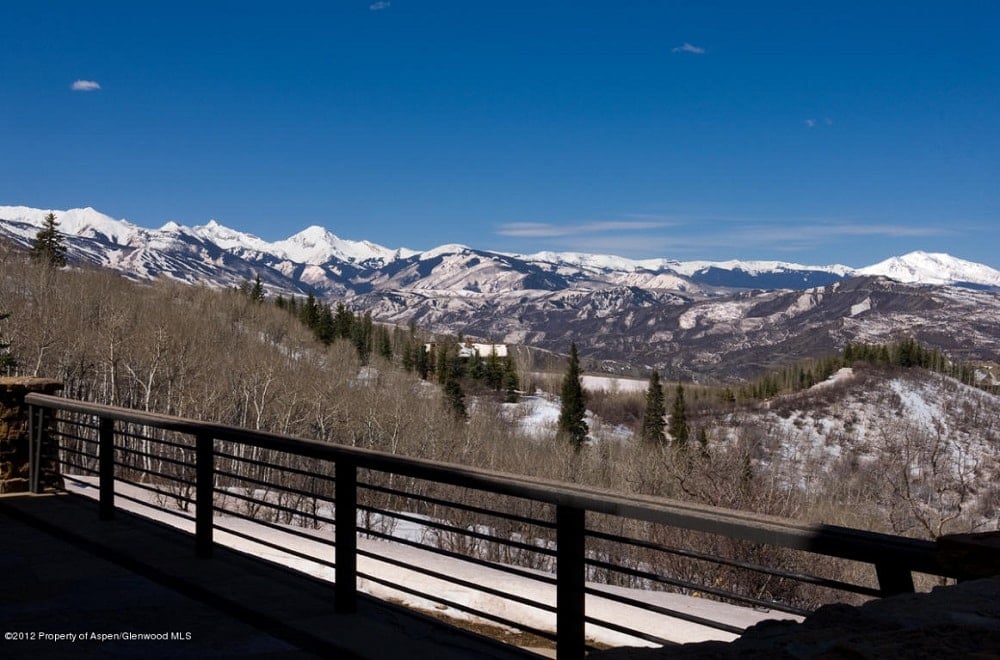 This is a view of the mountains from the vantage for the balcony. This is bordered with railings for safety. Image courtesy of Toptenrealestatedeals.com.

On the screen, Saturday Night Live has had her as its host, and she has starred in films like Woody Allen’s Alice and The Mirror Has Two Faces. In business, she is an award-winning developer and promoter of her creations: a line of beauty products, a lingerie collection, and a series of workout videos.

At the end of the day, Elle Macpherson is worth around $95 million. Wealthy Gorilla lists her as the 19th richest model in all the world.

She recently purchased a villa in Florida and decorated it in a stunning modern style. Now she is looking to sell the Aspen mansion that she purchased with her husband, at the time, billionaire, Jeffrey Soffer, in 2007. They bought the property from its original owner, Saudi Prince, Bandar bin Sultan, who built the home in 2004.

Nestled into Starwood’s gated community on North Starwood Drive, this 14,395-square-foot mansion sits on a 66-acre property boasting 7 bedrooms and 10 bathrooms. The home’s panoramic views look out over both the city and the mountains while offering you plenty of privacy.

On the interior, the great room with its vaulted and beamed ceilings is cozy, yet exquisite featuring white oak paneling and a mantle that was hand-carved from Italian marble. The dining area is small and looks out toward the mountains. Cook in a commercial kitchen, and sleep in a warm, inviting bedroom with a sitting area, hidden television, and his-and-hers bathrooms.

Get around this beautiful home on the French limestone floors, by taking the fancy staircase, or by using one of the 2 elevators. There is an indoor lap pool, steam room, sauna, gym, and juice bar, with LCD privacy glass by the indoor pool for privacy when desired.

On the exterior, the home dons reclaimed aged oak siding, custom copper shingles, and stone chimneys. The home features an outdoor pool, as well. The hot tub, reflecting pool, and water wall will all have a soothing, calming effect after a long stressful day of business. Take the path up to this gem on an intricate stone driveway and park in the three-car garage.

The Aspen mansion is on the market for $35MM.

Macpherson, who turned 56 on March 29, 2019, was interviewed by Vogue last year. In that interview, she stated, “I wish I’d had someone say to me: what you put inside, how you nourish yourself, not just food, but the people you surround yourself with, the books you read and the love you have, is what determines the quality of your life.”